I am trained in gorilla
http://brikwars.com/forums/

by Craigallot
I roll the dice and fate decides that the Bulls should go first, so that everyone will think the battle is rigged.

Actually it's probably for the best because I'm the only one who can see what's happened on the other turns if I were to go last. 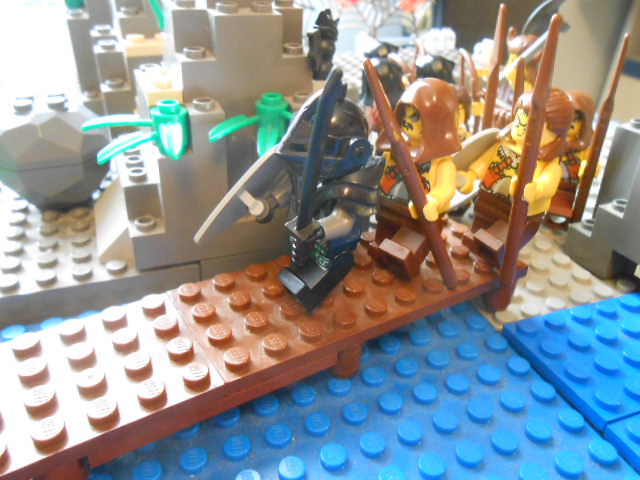 Valarius heroically puts himself in front of his men as they start to cross the bridge and implores the Bull God to direct any damage coming their way towards him (conveniently glossing over that time where he got impaled by Xalen even though he had the Bull God's blessing at the time). 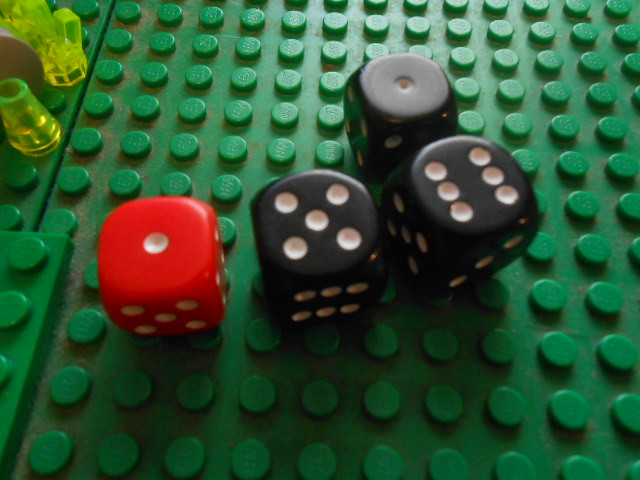 Aided by his Heroic Artefakt (the silver shield) he critically succeeds! Valarius will draw damage directed at the Bulls for a turn and gains a temporary +1d6 armour boost to boot (on which he rolls a '5'!) 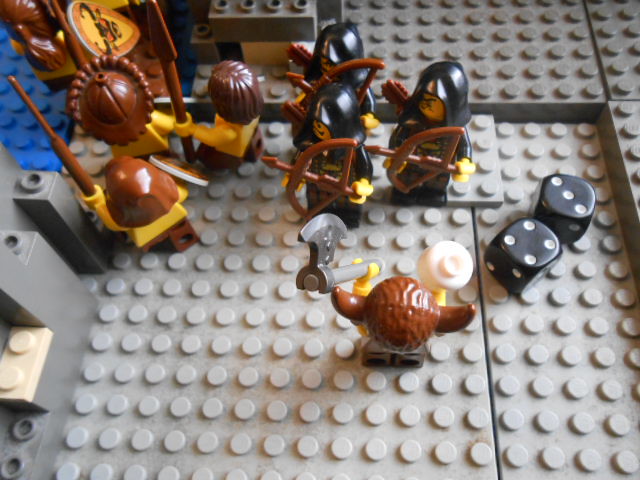 The Crazed Shaman buffs the range of two of the Ambushers with his SN dice. The third fires while taking a penalty for shooting something out of range... 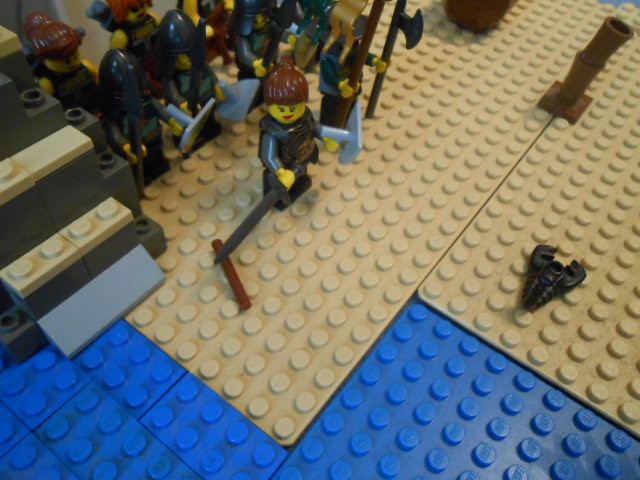 Only one arrow strikes true. The Draklon Matriarch smirks contemptuously as it bounces off her armour. 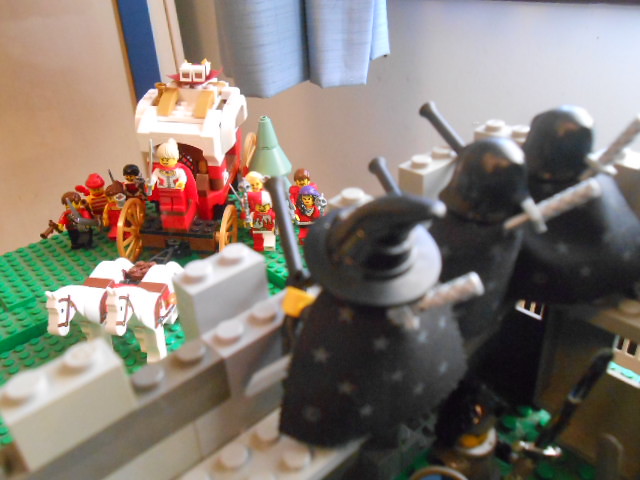 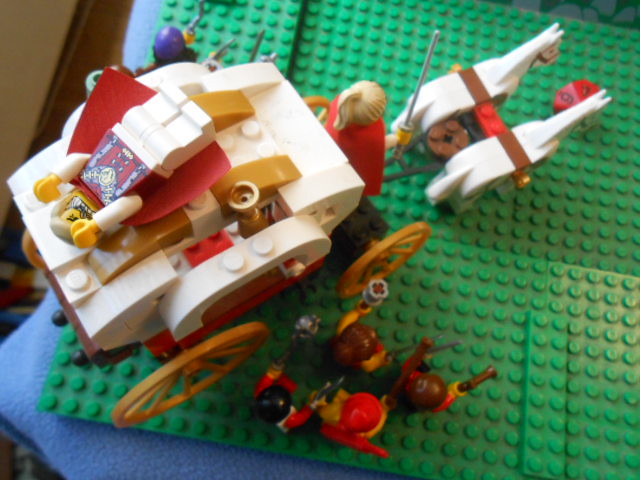 "I go to the flame-AH! Carry on my children and find your salvation-AH!" 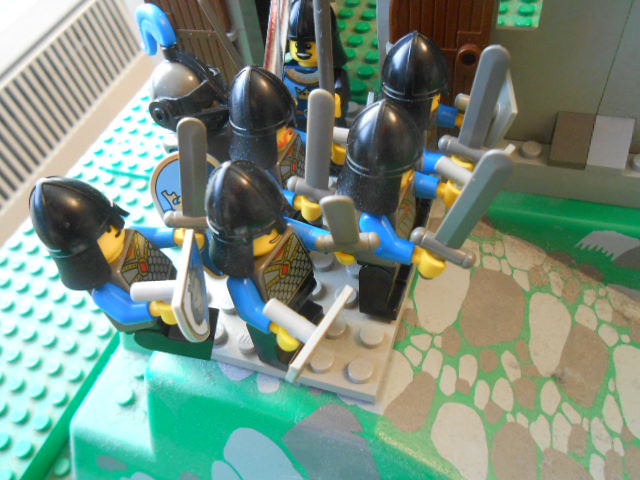 The Commander forms into a squad with the swordsmen and tries to encourage them to sprint harder. Mightily unimpressed by this Speech Feat, the soldiers remind him that he's the slowest among them. Embarrassed, the Commander loses his ability to make a Heroic Feat for the next turn. 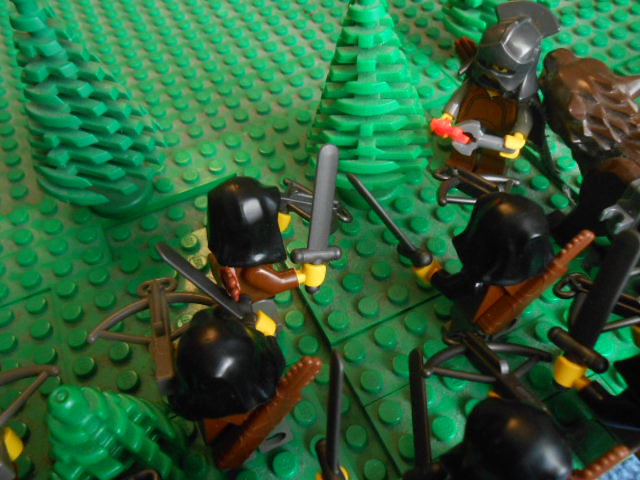 The Gang Leader lights a fire... Critical success! All of his Rangers gain 1d4 Fire Damage until their next turn. 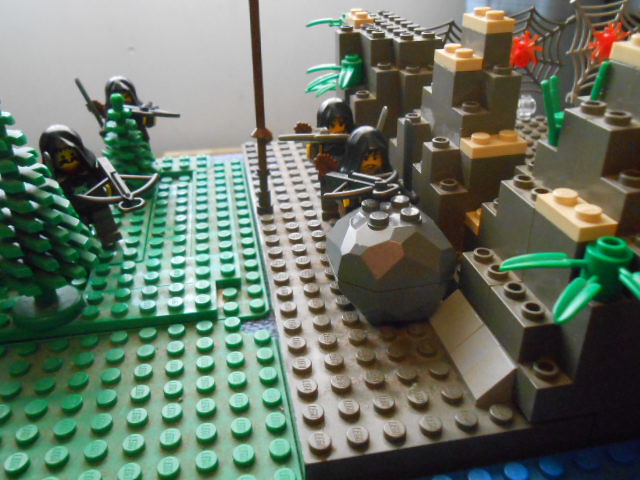 Two fire at the bridge, but Valarius attracts the damage instead. 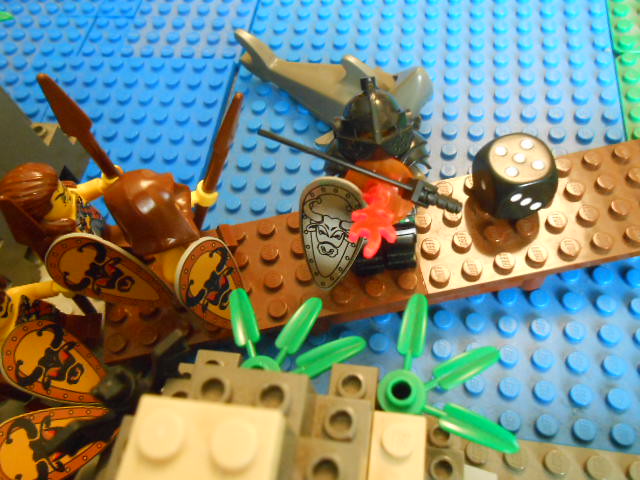 The damage rolls aren't nearly enough to even scratch him, but he is set on fire. 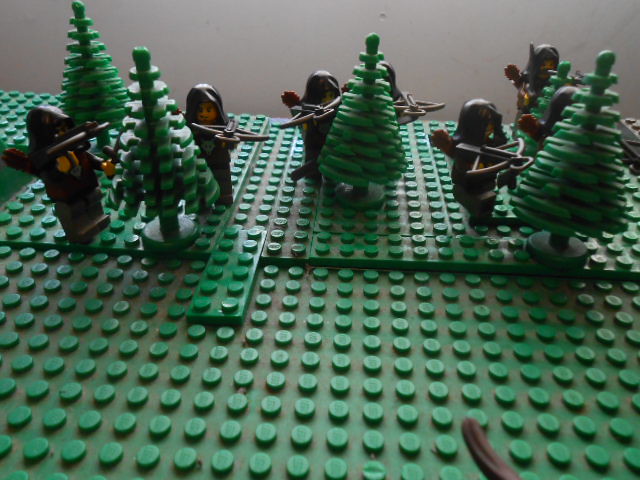 The Rangers then take cover and prepare response fire. 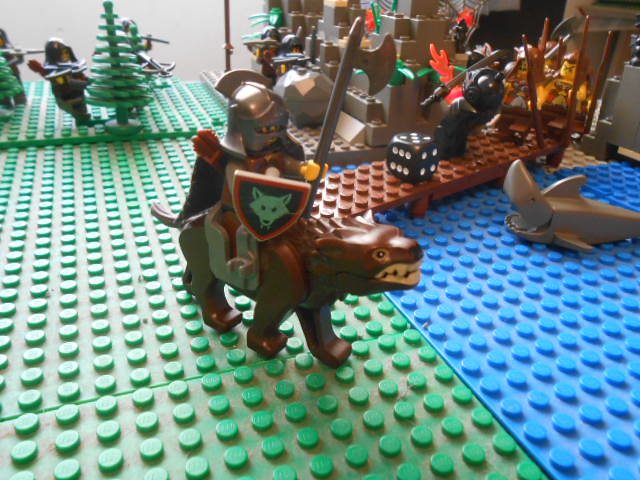 The Gang Leader then rides away from the castle on his wolf.

by Craigallot
CULT OF THE HOLY FLAME 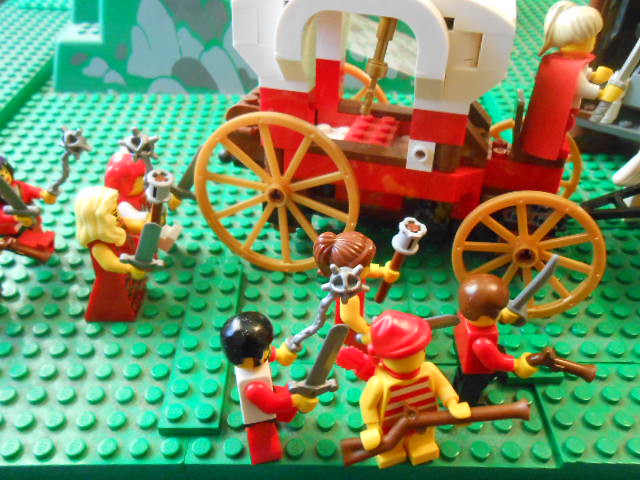 The Cult starts moving in the direction of the peasants, unfazed by the loss of the Cleric. The Cleric falls off the top of the cart somewhere along the way. 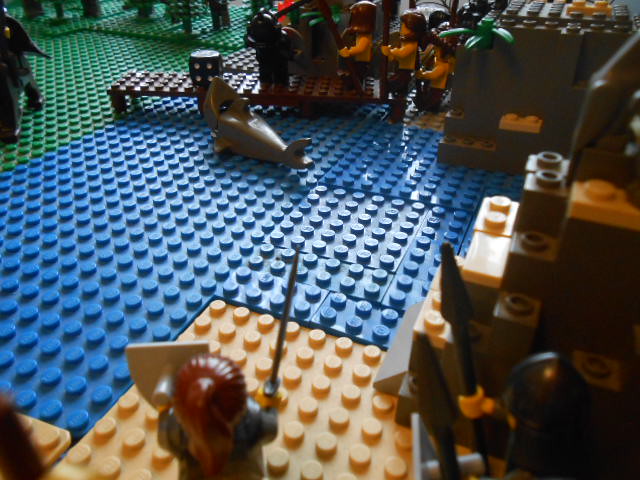 The Matriarch tries to use her influence over beasts to get the shark to attack the Bulls, or the bridge they're standing on, but the Feat narrowly fails and the shark loses interest in the Bulls instead. 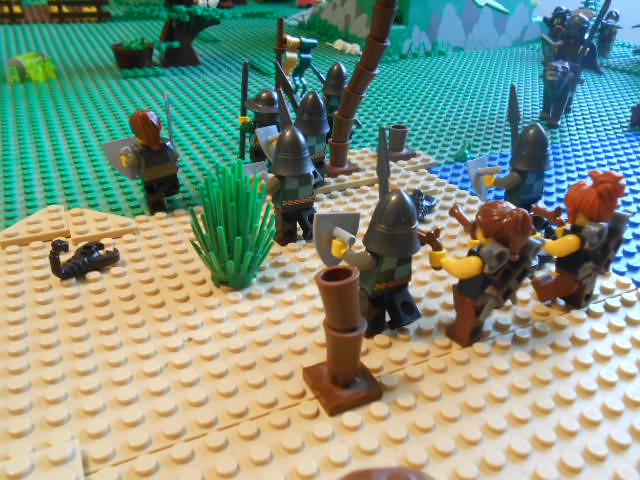 The Reavers start sprinting towards the Arktifakt while the Disciples provide covering fire. 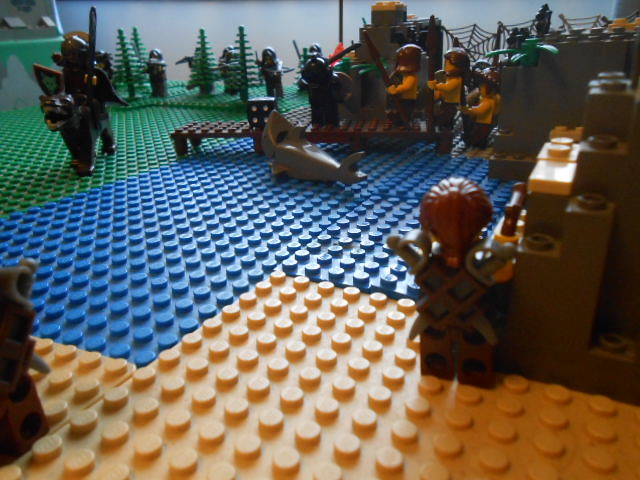 One Disciple takes cover and keeps an eye on the Bulls, who are currently out of range.

by Craigallot
THE PEASANT REBELLION 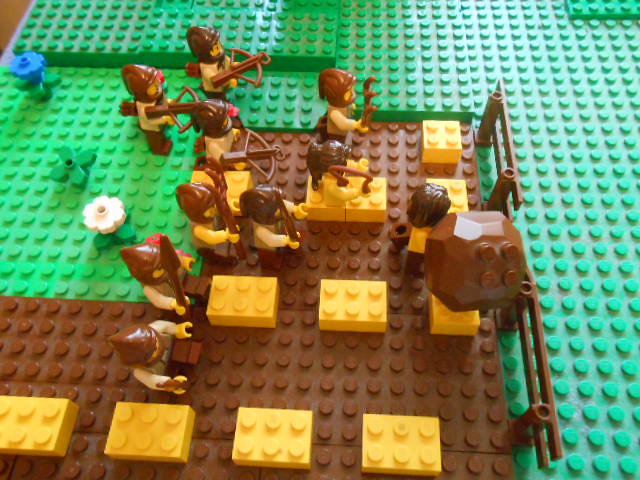 The peasants run into their field. Is it back to work for them already? 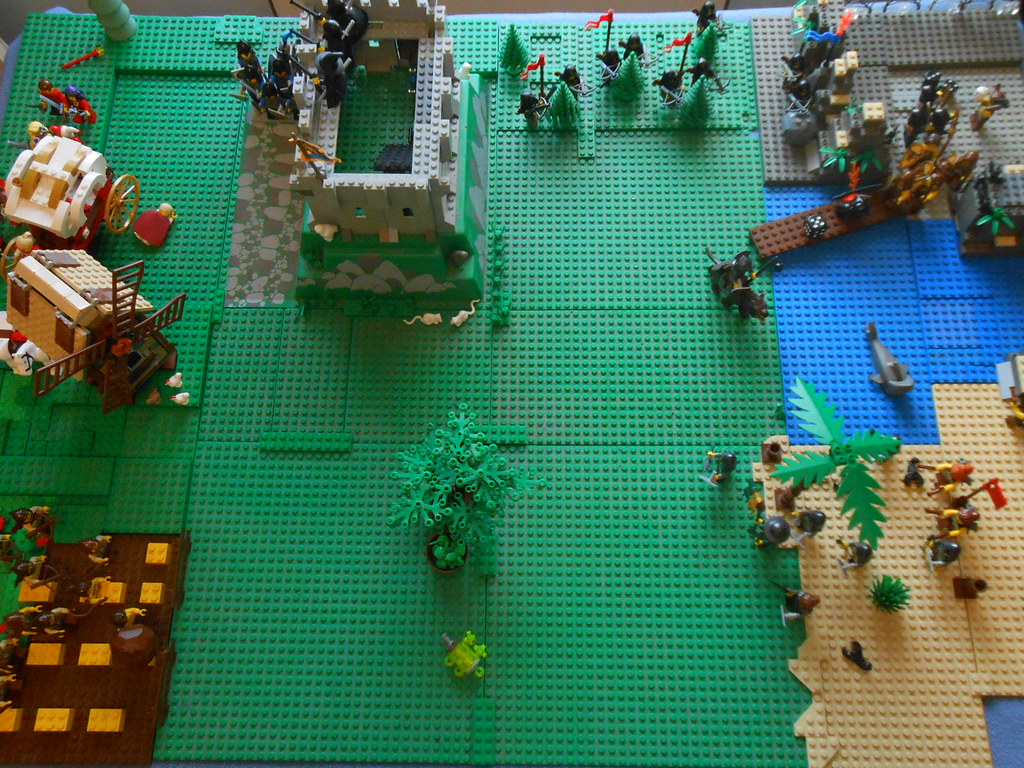 Now accepting orders for Round 2! Turn order will remain the same and I'll take my turn before I read your orders.
All times are UTC-05:00
Page 1 of 1
Powered by phpBB® Forum Software © phpBB Limited
https://www.phpbb.com/