BrikwaRPG3 - Turn 0 and Beyond! (COMPLETED!)

Huh. I sent orders; let me know if they didn't come through and I'll send them again.

stubby wrote:Huh. I sent orders; let me know if they didn't come through and I'll send them again.

Ok. I got them. I'll probably get the next turn done tomorrow or Wednesday.

Sorry for the late update. Have been extremely busy lately.

Alphafalcon's Son: "Why don't you listen to me?!? You shall pay for not listening to me!! BURN!!!"
2 Manly Men are burninated.

Nadine moves up the ramp.

The Bavarians all combine fire on and destroy the Brag Squad's last turret. 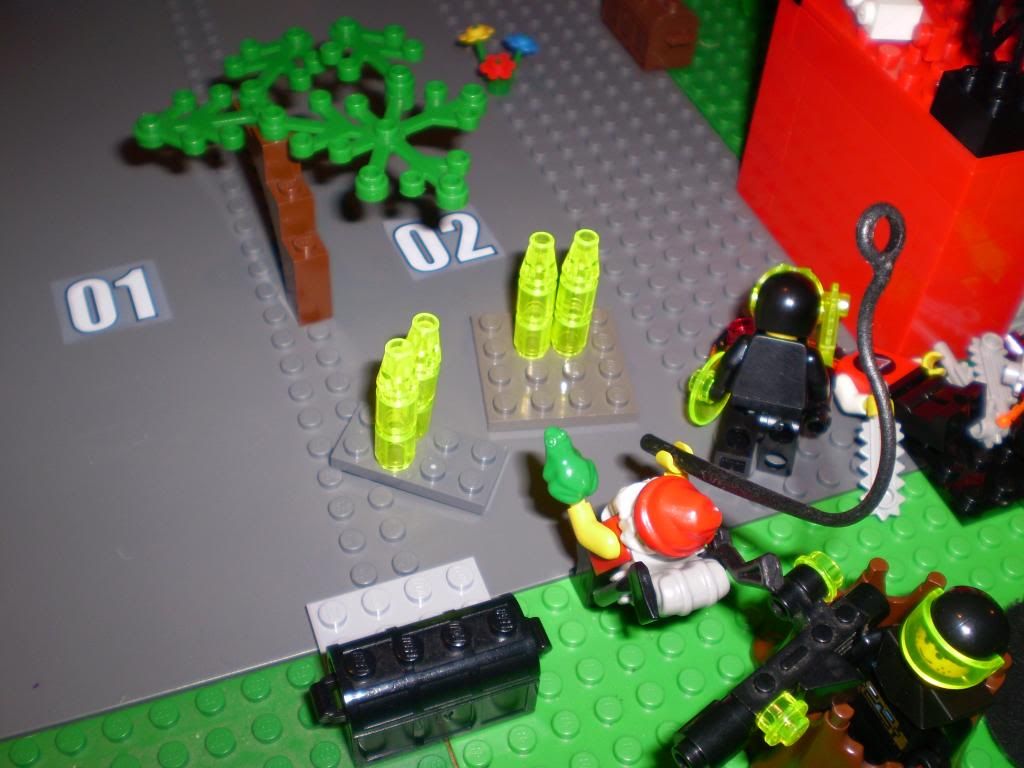 2 Manly Elves are summoned, each one holding a bow and a goblet of the good stuff.

One elf grabs the frog from MFS and ties it to his arrow. He aims carefully...

The dual chainsaw Manly Man attacks a ZMC berserker. The berserker survives by parrying with his shield.

2 other Manly Men move up and finish him off though. 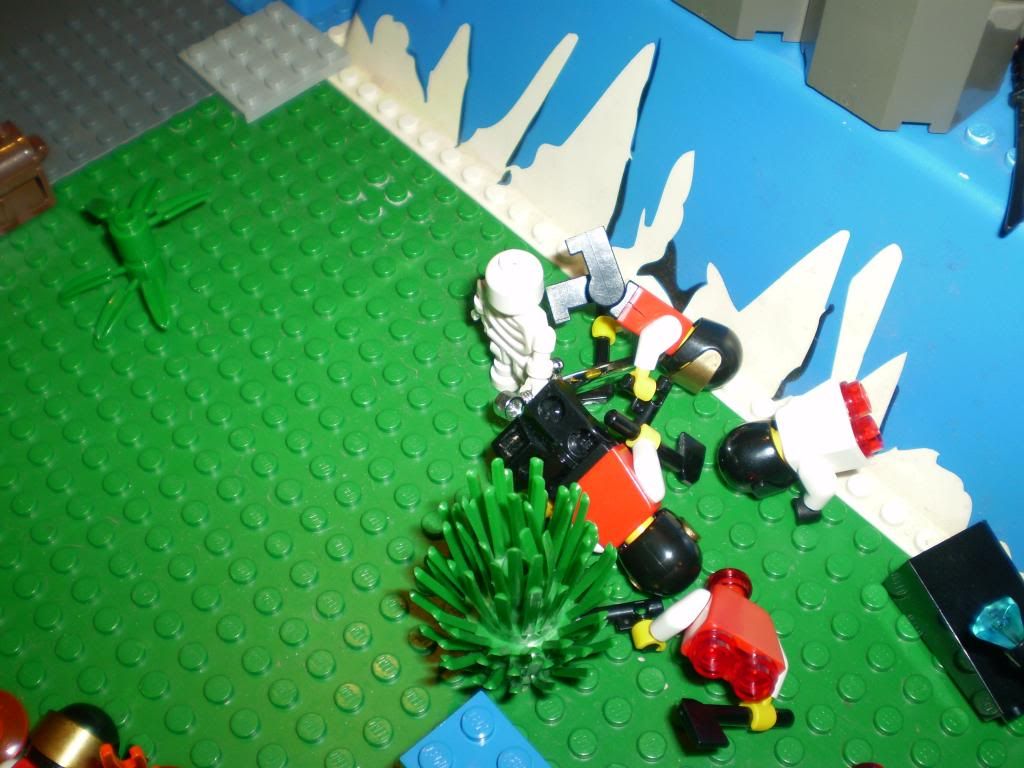 The 2 Manly Men that were disrupted by the Avalonian Pyramid Artillery last turn both get up and try to ride the skeleton like a horse. They both fail.

A Brittanian moves over to a chest and opens it. He finds and equips another gun.

The rest of the group joins him. The Professor General uses a feat to create a makeshift wall. Then everyone fires on the Bavarians, killing both heavy weapons specialists.

Scribonius: "Minion! To me! Here, take this knife and use it well."

And he does, dissecting a Manly Man. The skeleton now knows about the minifig anatomy.

Likkle Tank starts moving toward the other side of the fort.

Rade: "Scribonius! Put out those flames! I'm going to rebuild the turret!"

Zupponn jumps into the air...

...and pounds the ground with his power mace! Andromadev, MFS, an elf, and a Manly grunt are all disrupted by the aftershocks.

The last ZMC berserker moves in to attack the disrupted MFS.

One of the elves redshirts for him though.

The 2 ZMC Heavy Infantry move in to attack as well...

The ZMC Hardsuit takes out the OT Scythe wielder.

A ZMC grunt and the Gun Bot shoot and kill the double chainsaw Manly Man and a Manly grunt, respectively.

Then the rest of the troops move up.

Kadia: "You! Melee Specialist! We need to fix the Dreadnut. Come here."
She starts casting a spell on the soldier's beamsabers.

Instead of giving him tools and mechanikal skills, she manages to turn his beamsabers into a torch and an oar.
Kadia: "Well, that didn't go as planned."

Both Jeremiah and Duke Crystoph move up with Nadine.

This guy finds some dynamite in a nearby chest.

The Pyramid Artillery is out of range, so it moves up.

The rest of the troops are right behind it, while the spies are still nowhere to be seen.

...and the sleigh's horse runs over to him.

General Bluebelly: "To death and glory!"

The Scythians return fire on the ZMC, killing two.

The Rolling Bomb moves up while the Med Bot fails to heal again.

Scrabbles then runs up and decapitates a ZMC Heavy Infantry.
Scrabbles: "Haha. Noob."

The mechanix work hard to create themselves a hang glider, but who will pilot it? 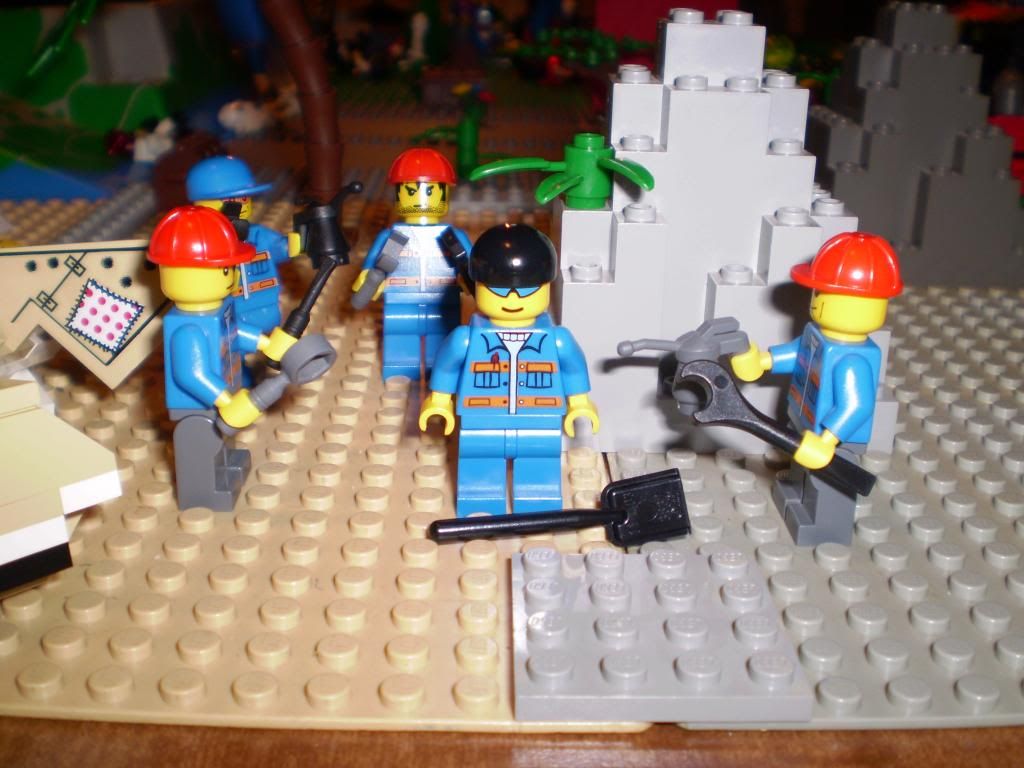 One Mechanik turns his hat backwards. He must be a badass.

After he gets in the hang glider, the arm grabs it...

stubby: "I better hide this chest in this pile of rubble. If anyone finds what's in it, they could become all-powerful!"

Wheelbarrow looks longingly at the Bavarian mech and gives out a sigh. Those metal armor plates have such curves...

Khaar starts driving towards the Manly Men.
Khaar: "The nerve of these Manly Men! Always leaving messes for me and never even saying thank you!"

He runs one over and doesn't care.
Khaar: "Serves him right, the jackass."

The Chainsaw Squaddie grabs the table...

...and flips it, partially blocking the entrance.

The other Chainsaw Squaddie moves up.

The rest of the Brag Squad forms up near the bridge while Von Brag types furiously on his computer.
Von Brag: "Come on, activate dammit!"
Some machinery below the fort starts humming.
Von Brag: "Vere you go!"

stubby makes a hologram of himself appear in front of Khaar.
stubby: "Ah, Khaar, long time no see! After I sensed your presence on this battlefield, I just had to let you know that you can increase his janitor level and unlock new janitor abilities by gathering up junk and depositing it in the junkyard. +1 to fighting dirt monsters is not really that exciting, so I know that you would be totally pumped by this opportunity. Back in my day we..."
Khaar: "Cool, stubby, but your in my way! I can't see through you, you know." 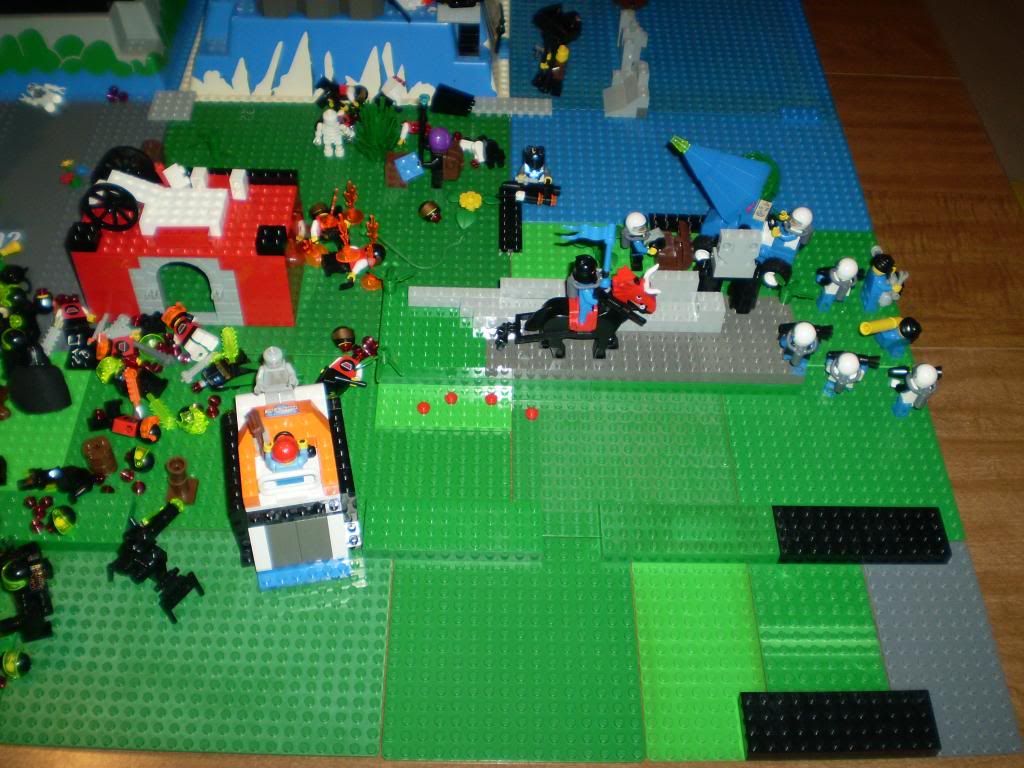 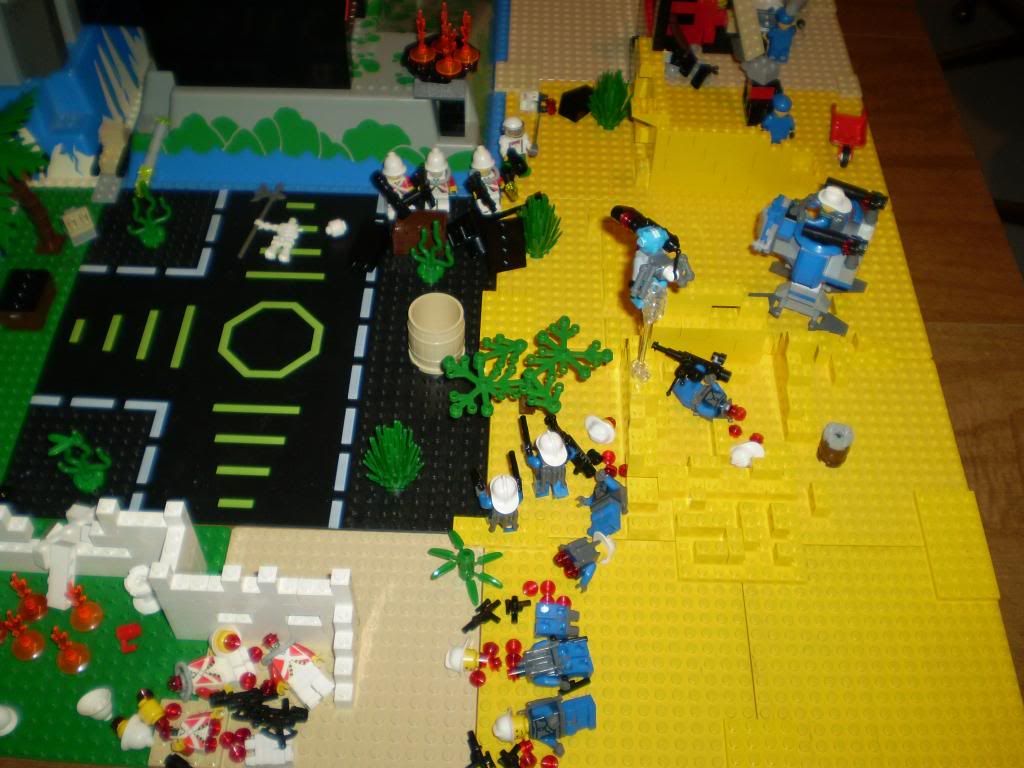 Send in Orders for Turn 4!

Was that really necessary, Natalya?

Zupponn wrote:One Mechanik turns his hat backwards. He must be a badass. Well, that went badly. How many do I have left?

Falk wrote:Well, that went badly. How many do I have left?

I had already hacked it last turn when you failed at killing it! I mean, I poured a bottle of whiskey into hacking that thing! I LITERALLY HACKED IT BY POURING A BOTTLE OF WHISKEY ON IT!
But you know what? I gave up having two machine pistols for that bottle of whiskey! And I put it to what I thought was good use! And then you come along and waste the thing on a misunderstanding? That's seriously uncalled for. Any chance you would be so kind as to at least repair the thing somehow and send it on its way, assuming the boozed up circuits are still salvageable?

Natalya wrote:Are you on my team?

Well he's not peach, if he swears an oath of fealty to hate and annihilate all peach kind, then sure he's on your team.
Top

Rade doesn't have time for multiple blood-feuds. His goal is to kill Bragg. That is his only goal. If helping the Assyrians will get Bragg more dead, then there is nothing wrong.

Neither of you are going to kill Brag. That's my job.
This sig is too fucking large: show anyway

Silverdream wrote:Neither of you are going to kill Brag. That's my job.

Long as he winds up dead, I don't care WHO kills him! We have to hunt down all the Brag-clones and destroy them all!
Top
Post Reply
105 posts