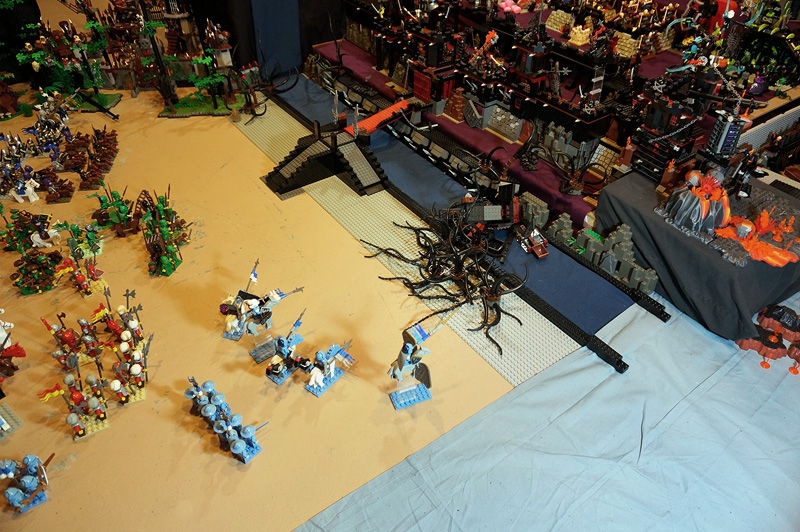 Rayho's forces move swiftly forward. Sir Rayho flies towards Dogdu's cage on his commandeered gryphon, while the gryphon's previous rider turns himself back right-side-up and gallops towards the drawbridge on Shadowhax instead. 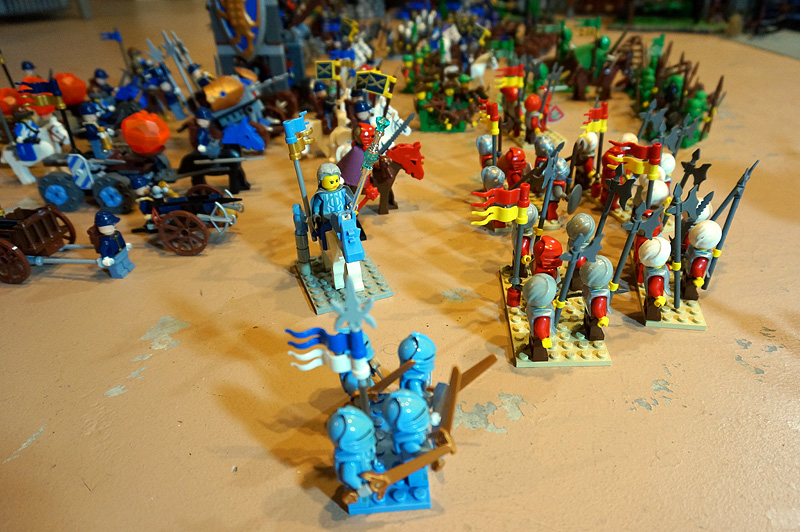 The heavily armored infantry are not reaching the wall as fast as Rayho's Mom would like. She calls upon the spirits of the air.


RAYHO'S MOM: There's no time to waste! Let the power of the wind carry you forward! 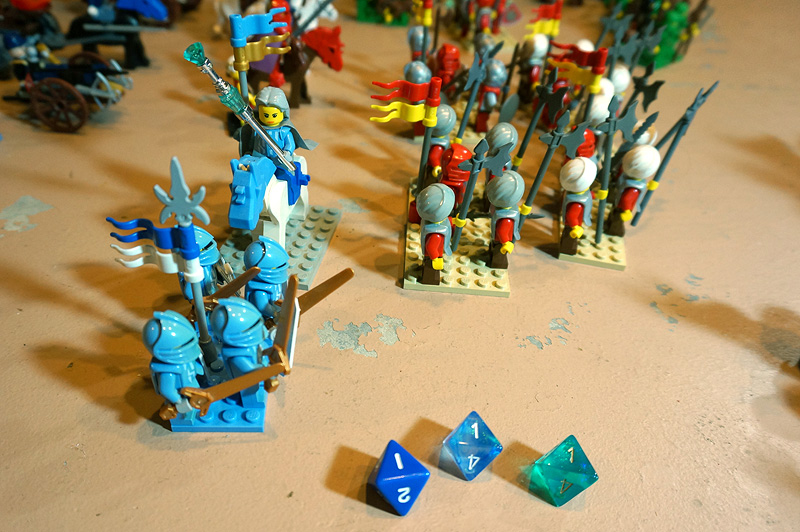 Her magic roll is unfortunate. 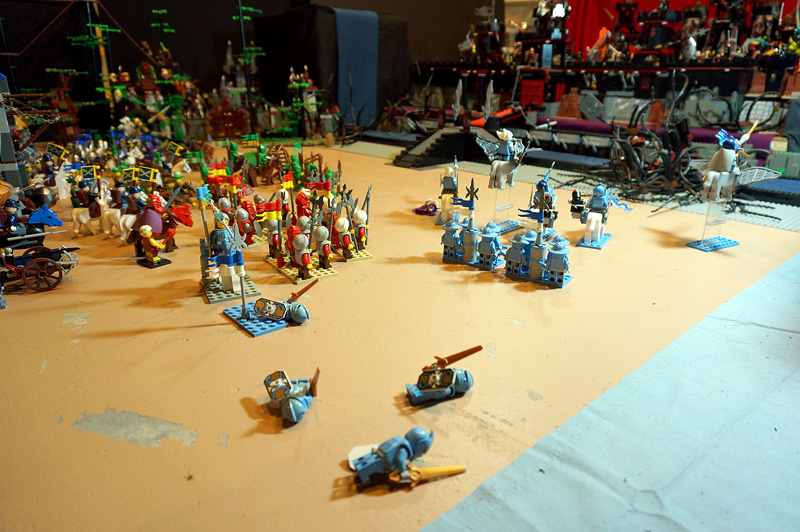 Instead of propelling the soldiers forward, the spell Fumbles and breaks 3d8 worth of wind. The troops are launched into the ocean in their heavy armor. Luckily their Physical Opposition rolls shave just enough inches off the distance to save them from drowning.

RAYHO'S MOM: Quick! Everyone get up! Maybe no one noticed! 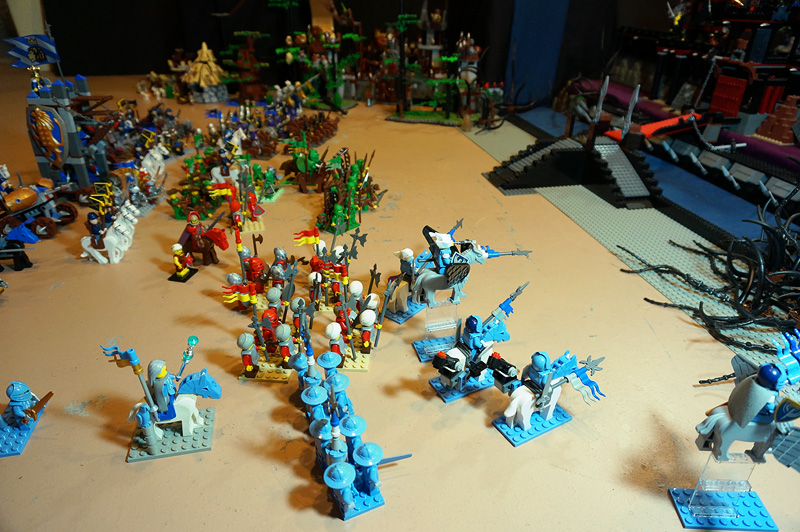 Stalin's troops move up the right flank (as much as they can, with the Rayhos in the way). 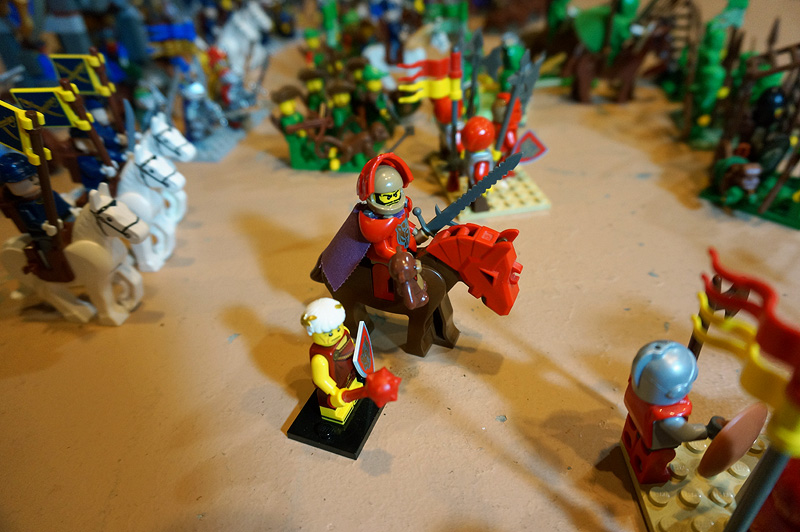 SIR STALIN: That's a rare talent. Rayho's Mom can blow four of her own men at once.

COMMISSAR LT. KRUSCHEV: "If you cannot catch a bird of paradise, better take a wet hen." 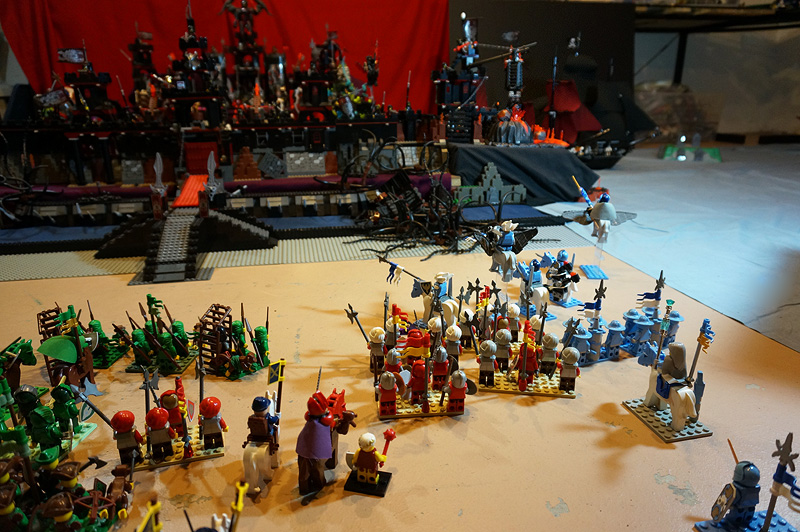 SIR STALIN: Sir Rayho isn't going to reach Sir Dogdu in time. I'll have to open that cage myself.

ROYAL SCOUT: What can you do? It's over forty inches away!

His helmet is stifling.

His bear is snuggly. 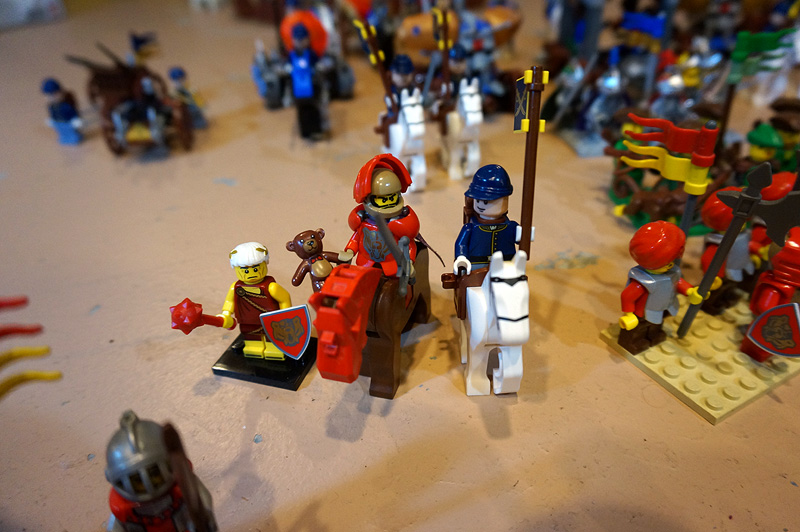 SIR STALIN: Can you mark the target for me?

ROYAL SCOUT: No, it's too far. What you're asking is impossible.

KRUSCHEV: "The more bombers, the less room for doves." 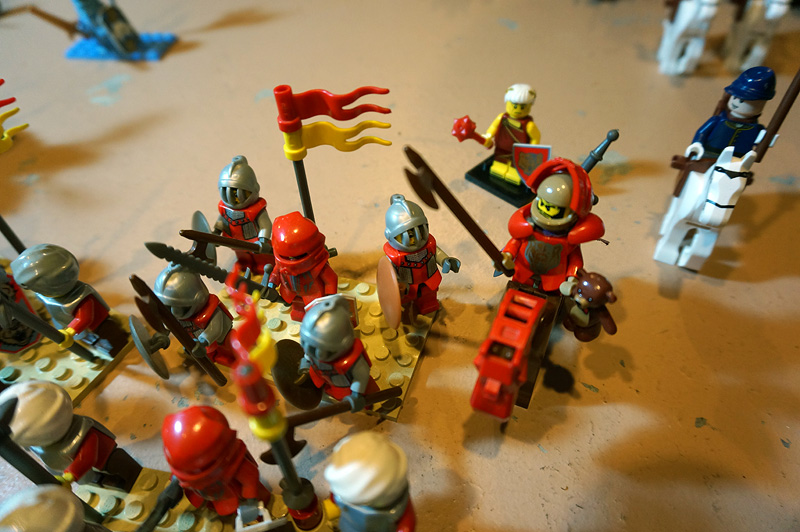 SIR STALIN: Thanks, Dimmy! But that's an axe! 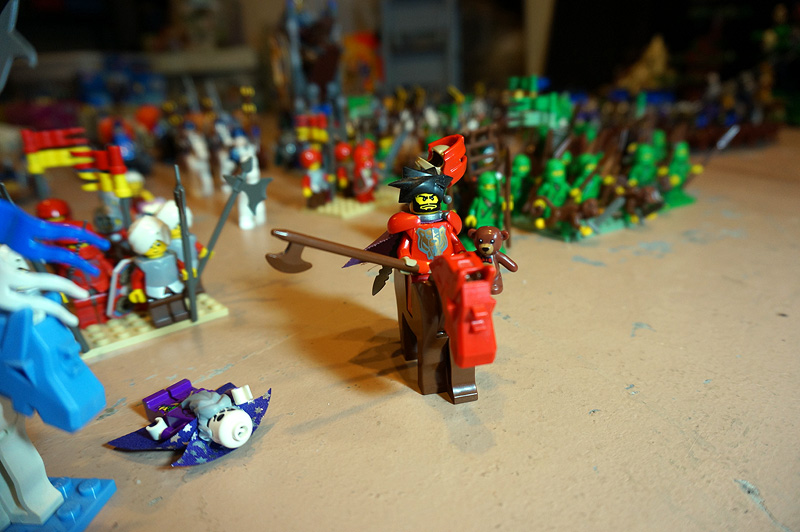 His helmet was stifling. It narrowed his vision, and he must see far. 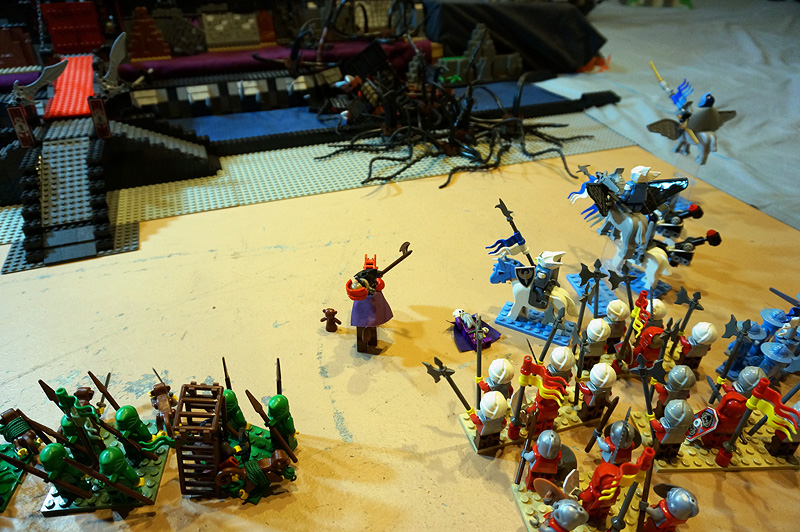 His bear was snuggly. It was a cuddly distraction, and his target is far away. 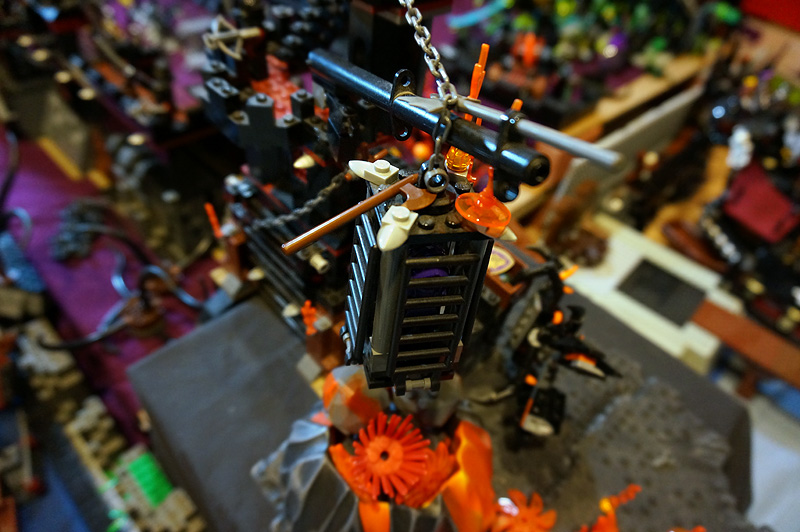 The old ones say Stalinists are known for their strength ...

Feat of Strength successful, although only barely (roll of 2 vs 2) - Stalin is able to ignore range limits for the throw. He still had to make the Skill roll to hit the cage door though. 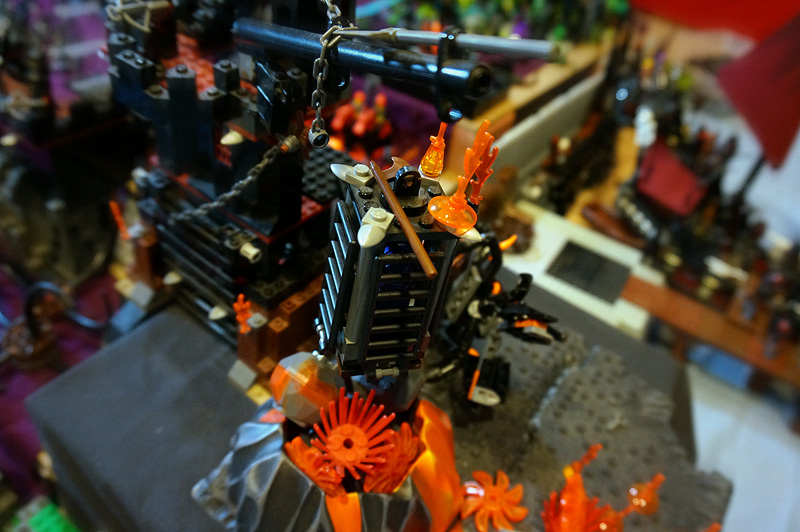 So I've had some adventures since posting turn 1! You might notice some damage to the floor; I had to move the whole battle aside while we dealt with some minor flooding issues, and the tape I used to mark everyone's locations pulled up the paint. Everybody should be back in their correct positions now, or close enough for Fudge's sake.

Looks like Sir Dogdu's about to be the butt of some hot dog jokes when that cage falls into the volcano. Has anybody heard from Arkbrik recently? I think I'm going to need some emergency orders for the Dogdu team, but I don't think he's been around since November.

Last I saw he posted was in that magic thread and yeah, that was november.

Still no word from Arkbrik, we'll have to assume he died. I still need orders for Dogdu though. Who should I draft as the Dogdu understudy for Arkbrik? Bonus points for dog or wolf-themed suggestions. Is Theblackdog in this battle yet?

I would guess no.
Send him a pm, he might not be watching the fail train.
Top

I could take on the task of running the Dogs.

or should I say

Hmm. I'm hesitant to give the venerable Dogdu to someone as new as devincp, but he did speak up several days before ikensall. Who should I go with? Someone give me a half-assed ill-informed opinion.

Toss a coin/roll a die

both are cool guys so it's a win-win

Give them to Zahru.

It says it's a railgun.
Top
Post Reply
115 posts