Is This The End? (Finished)

by Legomc
I got them this time.

by TastySkippy123
OK, thats a relief.

by Legomc
I still need orders from Steel_Valkyrie. You have about 10 hours.

by Legomc
Actually I didn't get orders from General Hawke. My bad.

He then walks towards his adversary, casually moving the mech out of the way.

The Lord of Light decides to use a more effective way of dealing with the demon, good old-fashioned face smashing. The Lord of Terror loses 1 HP (3 remain). 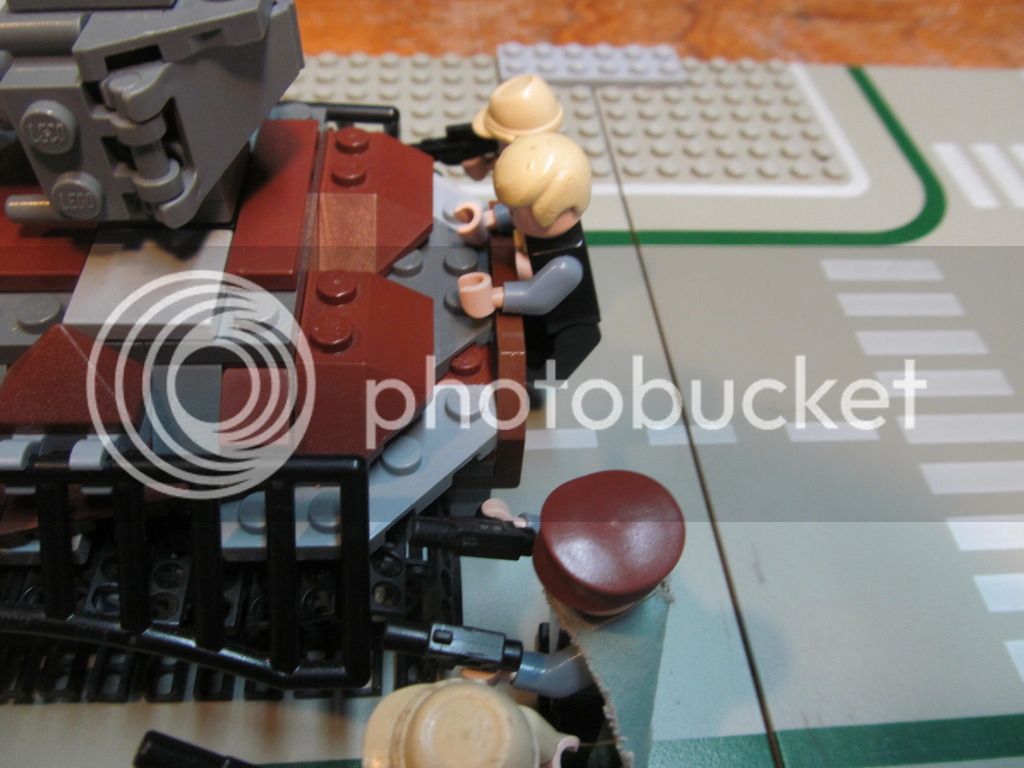 Peter climbs onto the back to the tankette.

Once he is on top, the tankette backs up.

It then aims at the Lord of Terror. The attack fails to harm the creature.

Sargent Johnson: "Damn it! I didn't get to use my feat or my feet!"

The pilot makes the mech do a back flip.

She lands it, crushing a regular trooper and a jetpack trooper. 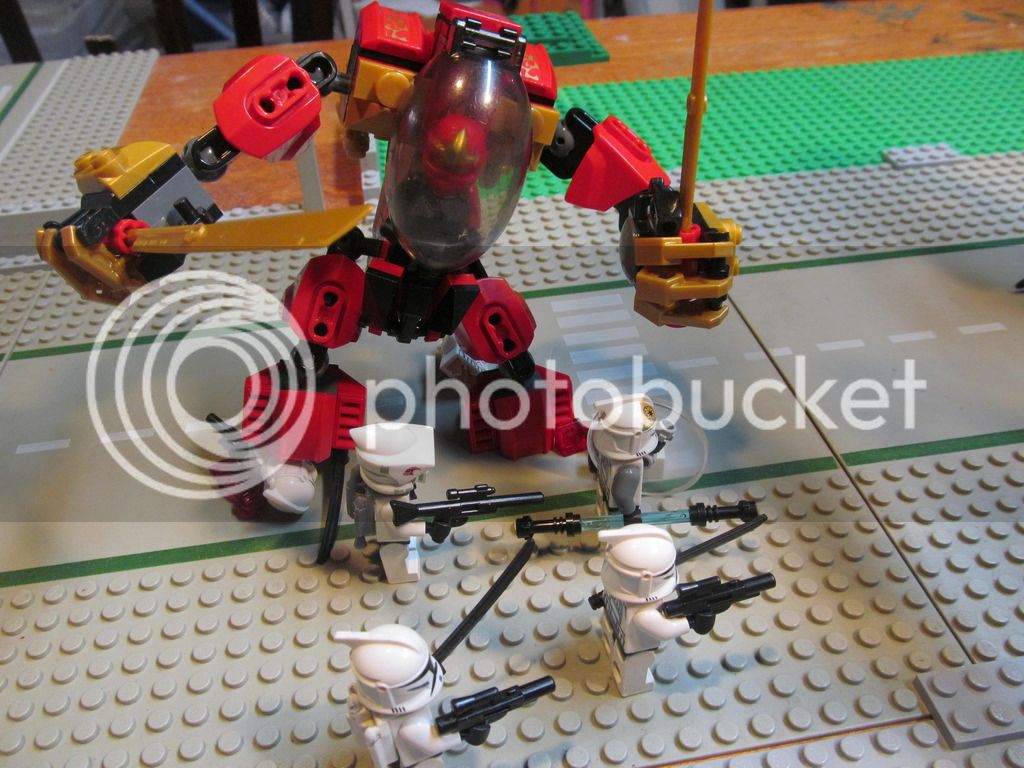 She then draws her blades and readies for an attack.

The clones spread out and head towards the TRONG forces, but don't make it in range. Instead they fire at the mech, dealing 1 damage (2 HP remain).

Commander Dax sprints towards the Greeks.
Dax: "Let me show you how to get somewhere!"

He trips over a clone.
Dax: "Damn it Swanson!"

The blow is blocked easily. 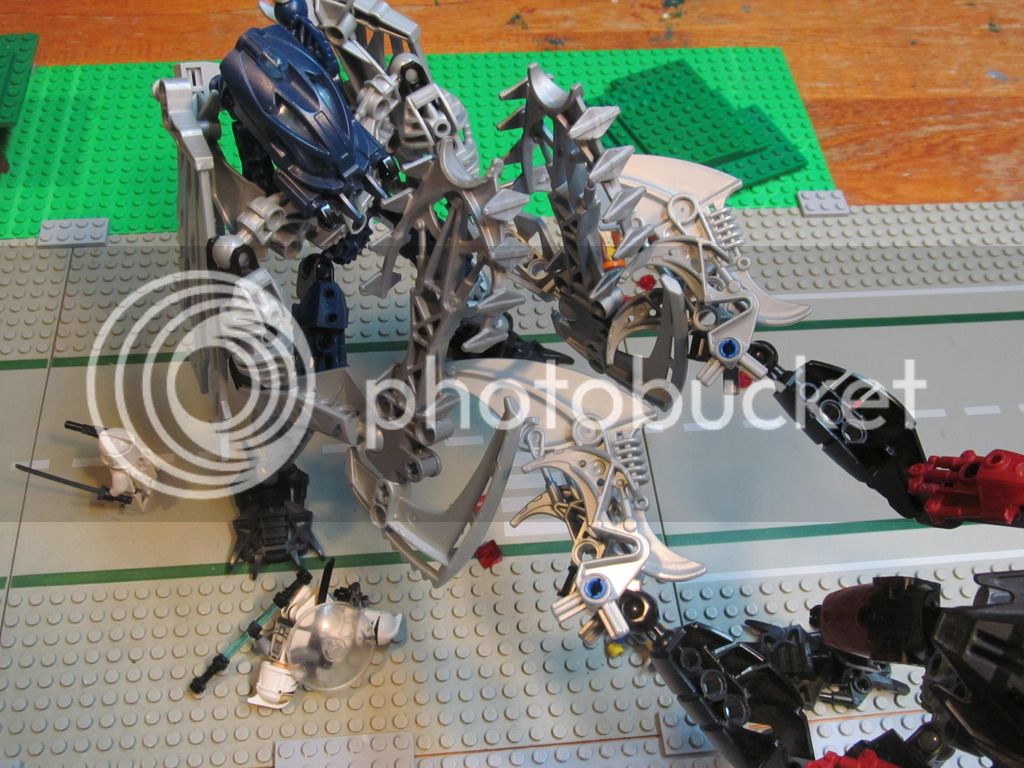 The Lord of Light blocks again without breaking a sweat.
Lord of Terror: "I guess you were prepared!" 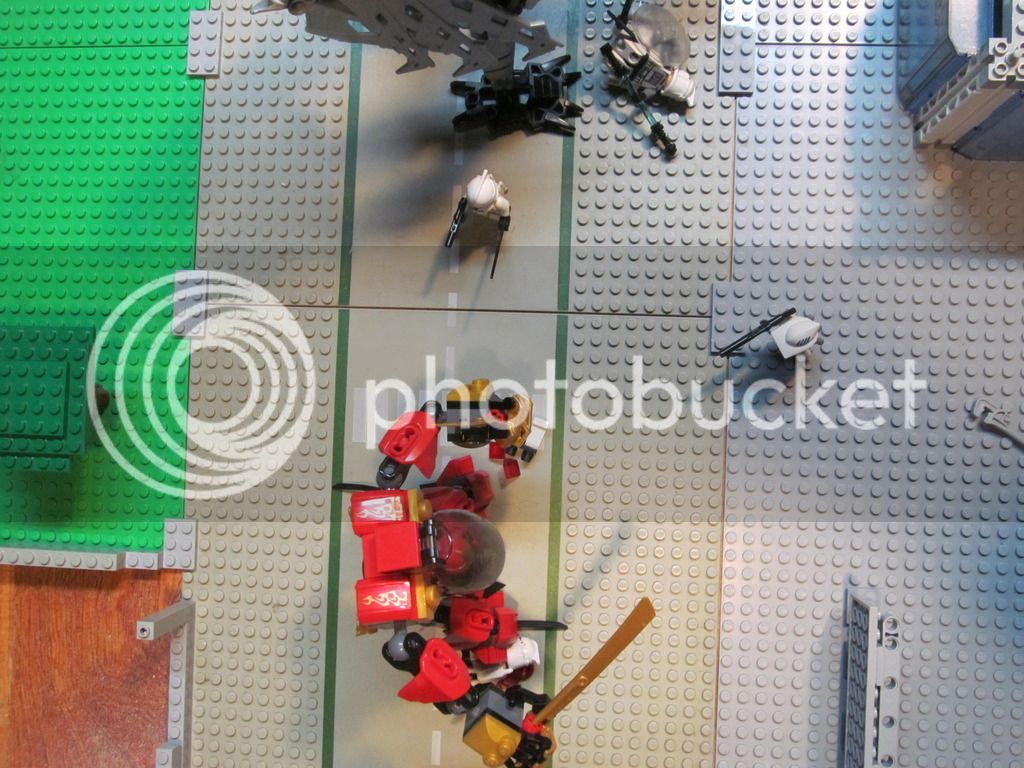 Technical notes:
6. Both Lords can always use 8" of weapons and always have 3d10 armor.
7. Objectives, and the status of completion, will remain secret until the end of the game.

by TastySkippy123
This is going....un-according to plan! Oh well, thats

This looks to be an awesome battle.

by Legomc
Still need orders from lordintype and General Hawke. You guys have 24 hours to send them in or you will be NPC'd. Also, General Hawke don't send orders, somebody else can take the Lord of Light if they want to.

by motorhead fan
Can I take both the Lord of Terror and the lord of Light?

by Legomc
No. And General Hawke sent in his orders. The next turn will be up late today.

After putting her swords away, the mech lady heads towards the Lord of Terror.

She climbs on top of the building. 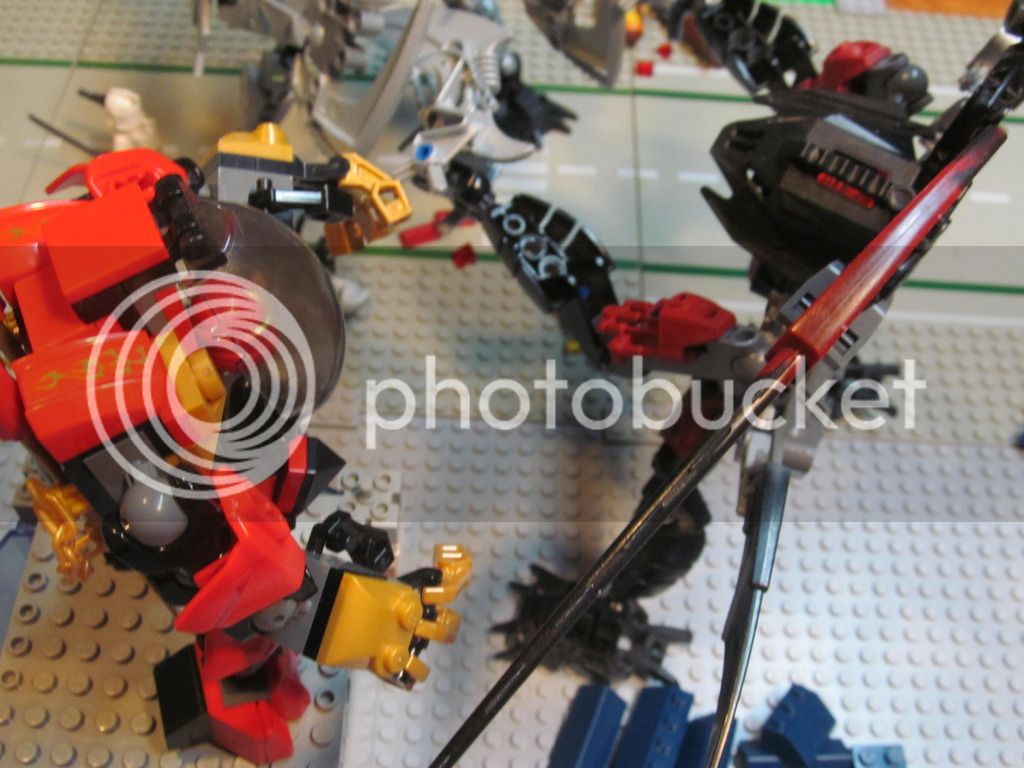 Gets ready to jump.

And lands on the Lord of Terror's back.

Sargent Jonhson: "Load the big shell."
Tank Gunner: "If you say so boss."

They fire the big shell.

The shot misses the intended target, the Lord of Terror, and hits the mech on his back. 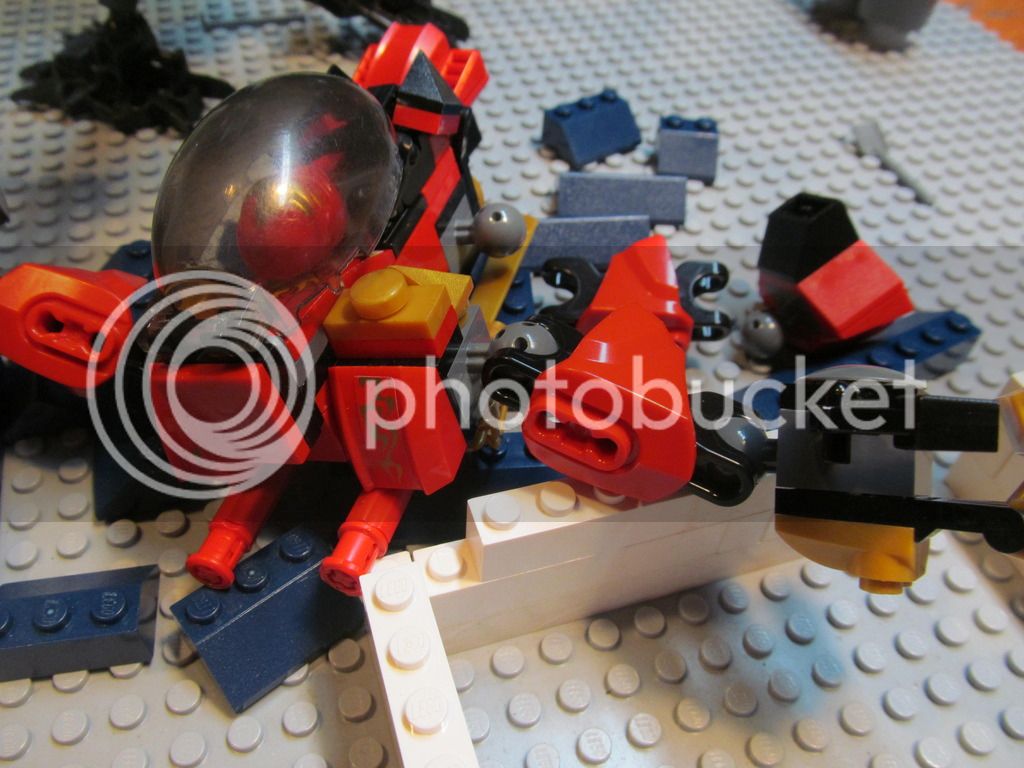 The mech is knocked to the ground and it's leg is ripped off. 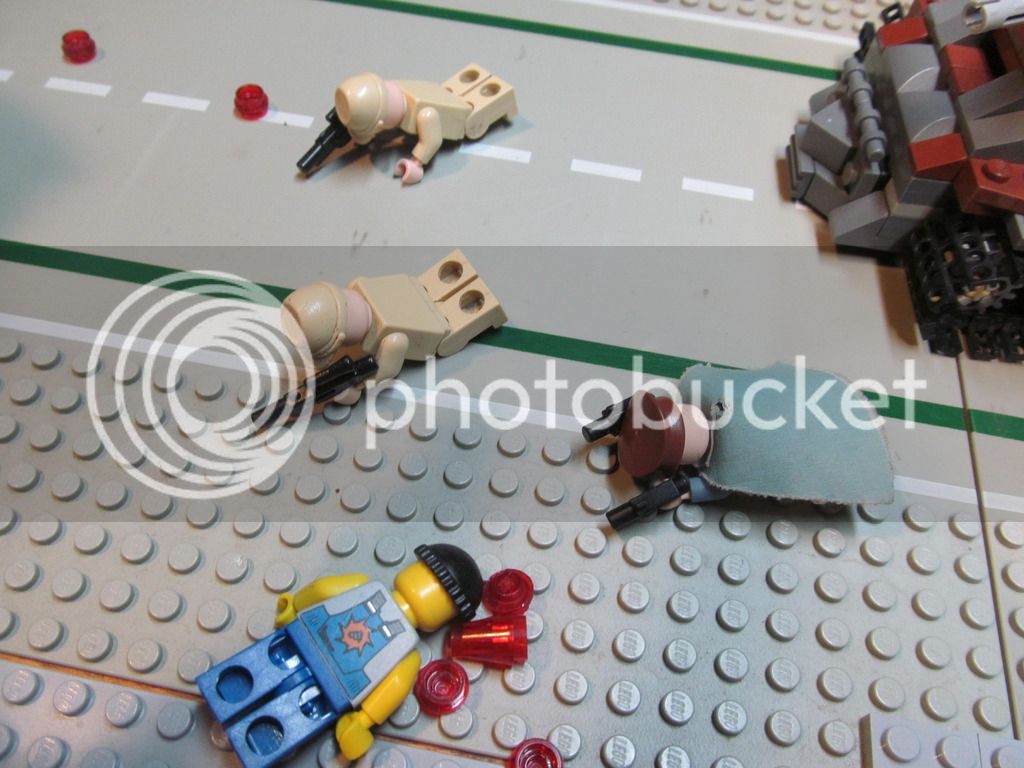 The troops then lie on the ground "to get some cover," or so they claim. They also fire at the Lord of Terror, but deal no damage.

The sniper moves over and aims at the mech, but crit fails the damage.

The remaining jetpack trooper flies onto the back of the Lord of Light.
He uses the good old gun n' sword technique on the creatures weak spot to deal one damage (3 HP remain.)

On the ground, Dax and Swanson stand up.

Swanson walks over and shoots the mech.

He manages to remove it's other leg.

Dax tries to do some running again.

This time he gets to his destination with out tripping.

He then taps the mech with his electo-staff.

After failing to use Radiance (again), Ra'tanato grabs the Lord of Light.
Lord of Light: "Nice wings you've got there."

Lord of Light: "Let's see how well you can fly."

He then throws Nok'traan across the map. However, no damage is done. 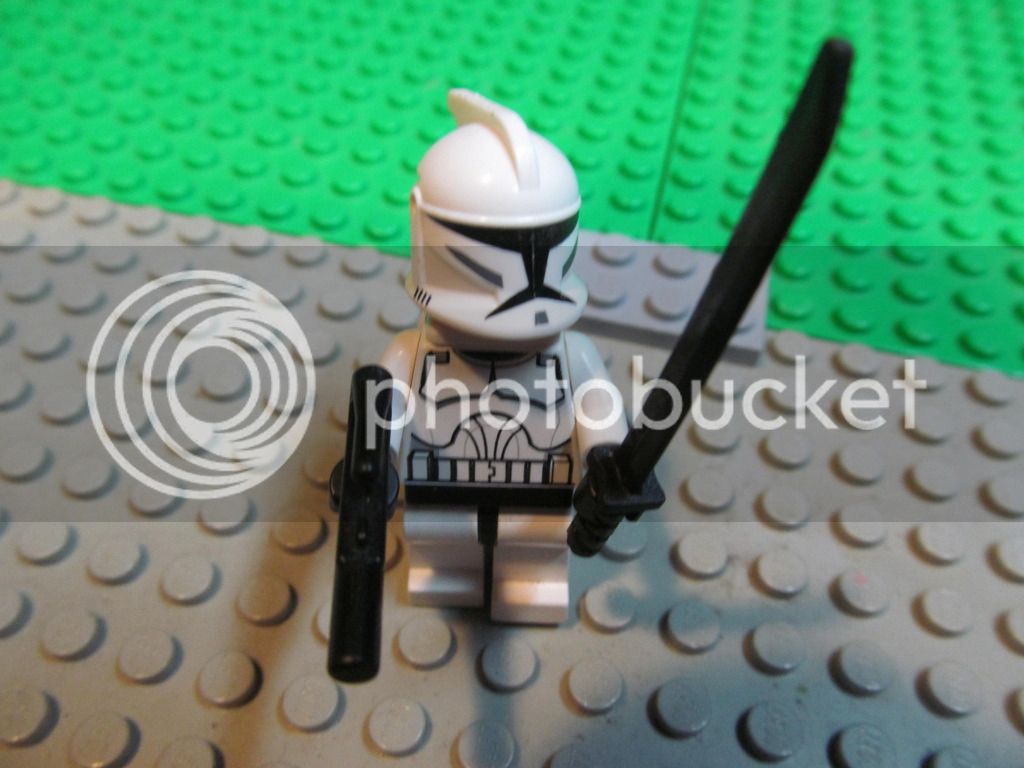 The clone that was on Ra'tanato is shaken, but not stirred unharmed (thanks to his jetpack) after falling off the creature's back.

The demon gets up.

He leaps at his adversary.

The Lord of Light is smashed into the ground and is brought down to his last HP.
Nok'traan: "Your death shall be the beginning of my reign of terror."

The TRONG soldiers were a little to close for comfort.

Johnson and his troops stand up.

Johnson walks over to the destroyed mech. 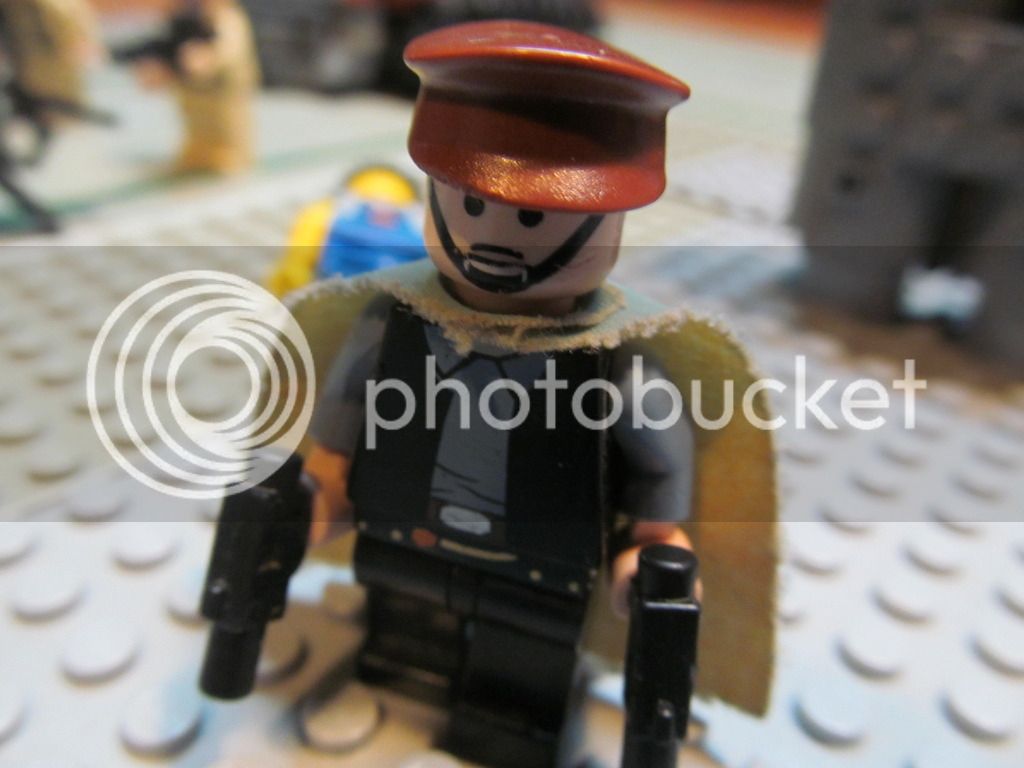 Sargent Johnson: "Alright, ladies I challenge you to a gentleman's duel. Drop you weapons, if you aren't a coward."

Commander Dax: "Coward? I ain't no coward!"
Mech Lady: "Hope you're ready to get your ass kicked by a girl."


Rules of the Gentleman's Duel.
6.Only heroes can take place it a Gentleman's duel.
7. No interference by people outside of the duel.
8. Instead of a normal turn, each figure in the duel picks one person in the duel to fight that turn.
Both those people roles their skill. The higher role deals 1d10 damage to the other person.
9. No heroic feats can be used during a duel.
10. If a people is reduced to 0 HP while in the duel, they are knocked unconscious.

He connects with the clone's gut.

Dax: "It'll take more then that to stop me."

The other soldiers head towards the remaining clones and try to shoot them.

The tank steps up where the soldier failed.

As the Lord of Terror lifts him weapons to strike the fatal blow, the Lord of light feebly raises his own weapon in the hope of surviving.

The blow comes down and, miraculously, the Lord of Light survives.

Nok'traan: "Pitiful. You should just give up and die!"

Ra'tanato (Struggling to breath): "Though you have beaten me, you are not yet victorious. Evil shall never prevail.
And with those words life left the god. Lord of Light Eliminated

The clones move in on the Greeks. The Jetpack trooper fails to kill anyone (by one damage!)

The sniper however falls off the building. He is unharmed.

Commander Dax: "Now it's my turn!'

Dax swings at Johnson, who dodges the punch.

Dax then receives what he failed to give. This time he takes one HP of damage.
Commander Dax: "Damn! Why in the stomach?"

The lady swings at the Sargent from behind.

However, the soldier still manages to avoid being hit.
Johnson: "I've been in quite a few bar fights. You won't get me with moves like that."

He then kicks his attacker.

by General Hawke
Well, crap. At least I made it to the final round in the one where I played as the civilians.

by Legomc
Still need orders from Steel_Valkyrie (and I know you've been on.)
All times are UTC-05:00
Page 2 of 3
Powered by phpBB® Forum Software © phpBB Limited
https://www.phpbb.com/