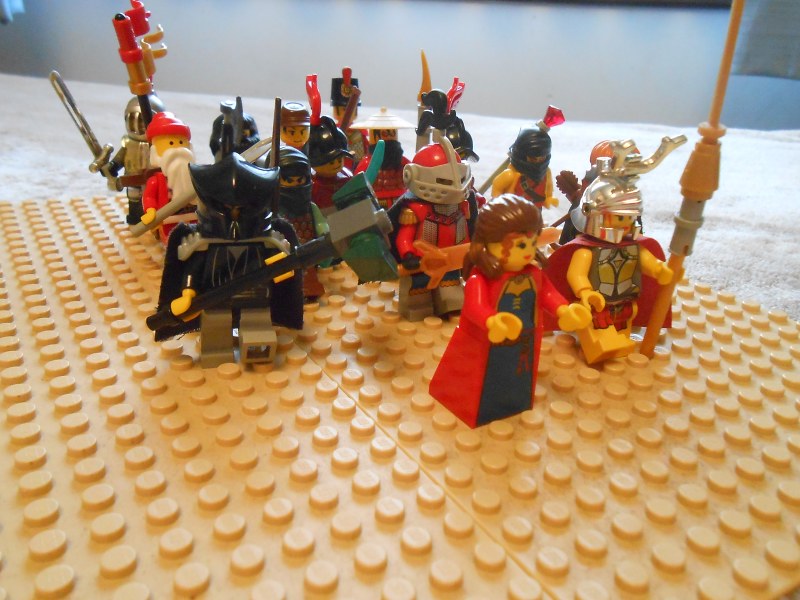 After their first skirmish with the Falx and Bull fanatics, Queen Lara has gathered her volunteers and now traipses the unfamiliar desert with Falx generals Croses and Augusta in tow, expecting a Falx attack at any moment. 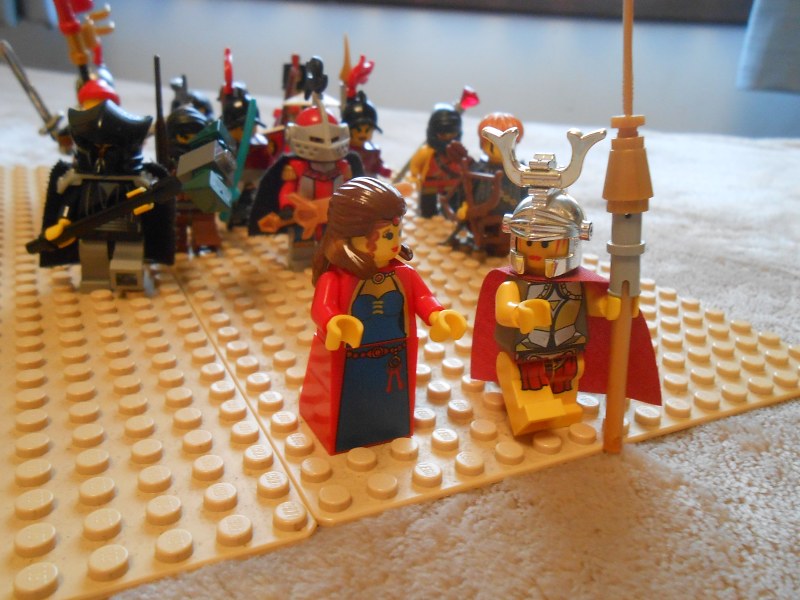 Princess Lorreaine, clearly agitated, beckons her mother to walk ahead out of earshot of the volunteers.

Lorreaine: "Mother, are we to just walk around in this desert without a plan?"

Lara: "Don't be so impudent, child! I've just finished scrying our surroundings, and I have already come up with a plan!" 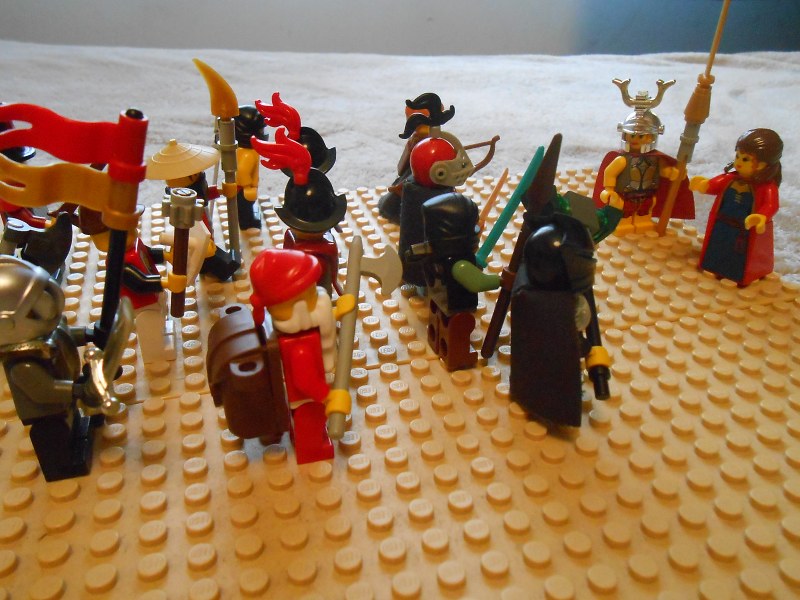 Lara: "Volunteers! I suspect someone's tampered with our portal, which is why we arrived separated from our army! We will have to move fast! We need to find our men, find shelter and a suitable oasis, and fast. Princess Lorreaine, Aloysius and Lord James will head north. Tachi, Nodachi and Boras, go east! Lord Godfrey, Rolys and Droe, head south! I can sense there's an oasis somewhere there! Rolys, once you've found it, shoot one of your flare arrows and I will teleport what men I have available to you to help secure the site. Lord Drakeseye, you and your retainers will keep me up to date on the different groups' progress. Joul and Punik will stay here to guard the prisoners while I continue scrying the surroundings." 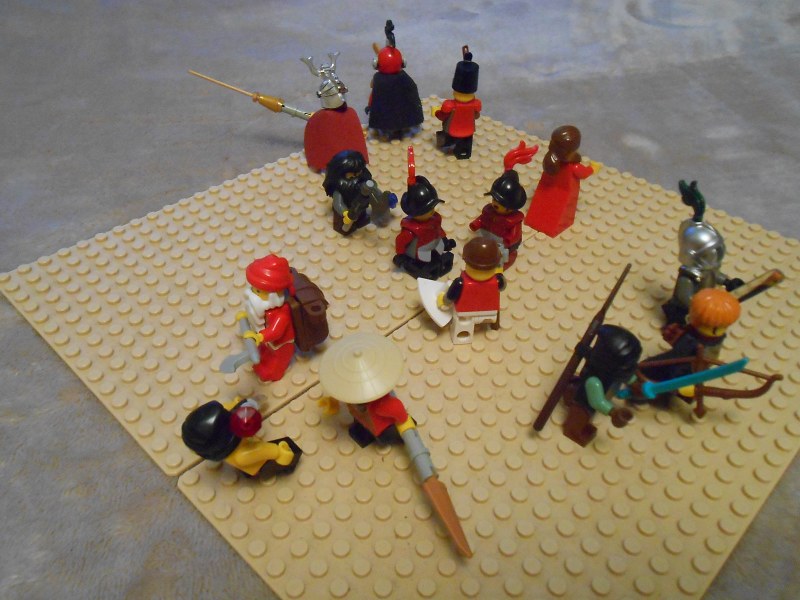 Croses, one of the captive Falx generals, looks at Augusta, who is visibly shaking despite the sun being on them.

Croses: "Are your injuries playing up?"

Augusta: "No, the queen healed me enough to stay alive... I hate being on the sidelines while our men go into battle, and I'm thinking of the idiots Varius is going to put in command in our absence!"

A short while later... 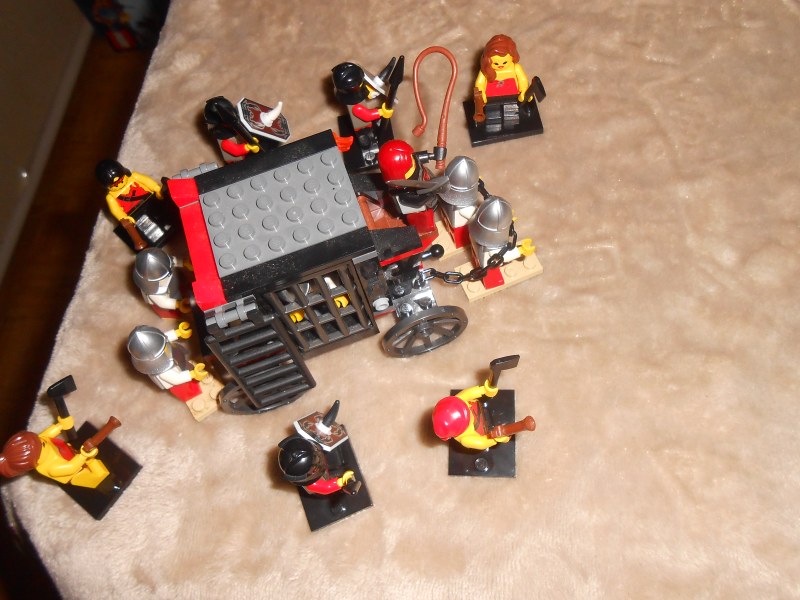 A Falx prison wagon moves across the desert, pulled by a group of captives. 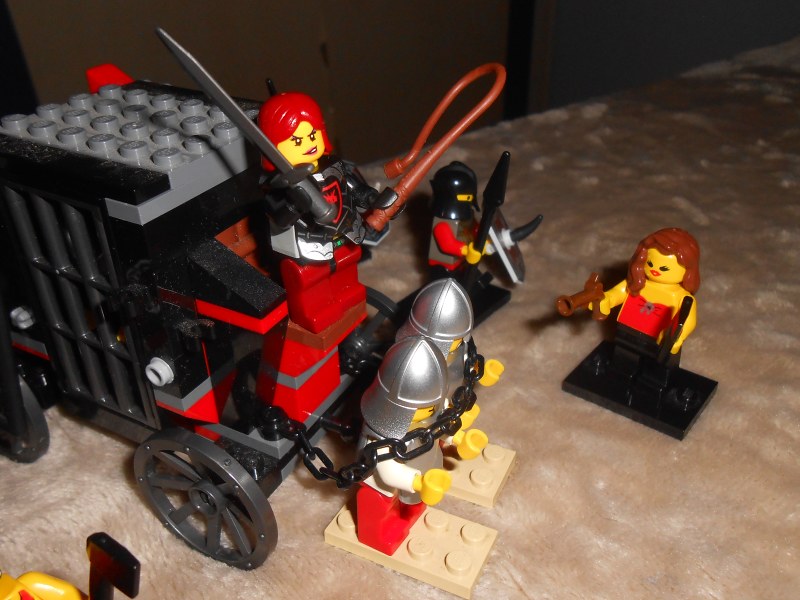 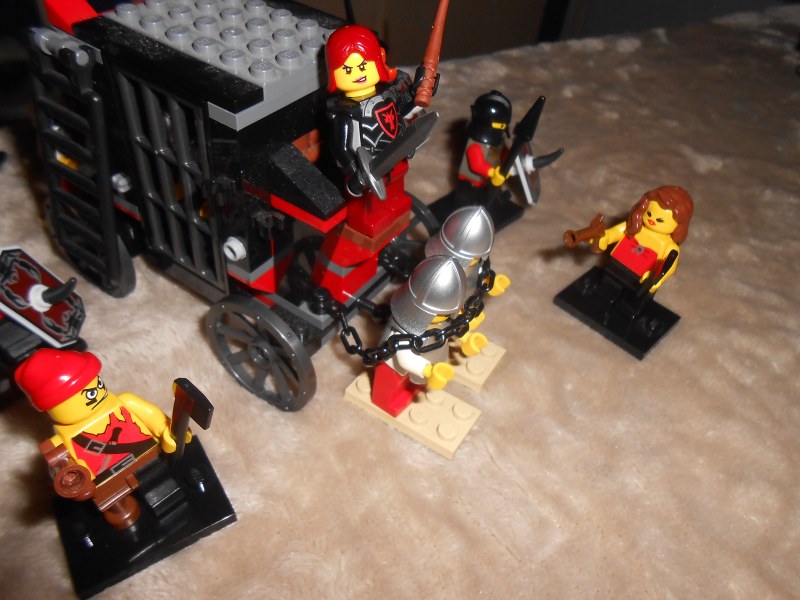 Peg Leg: "If you stopped whipping the prisoners for a second you could see it!" 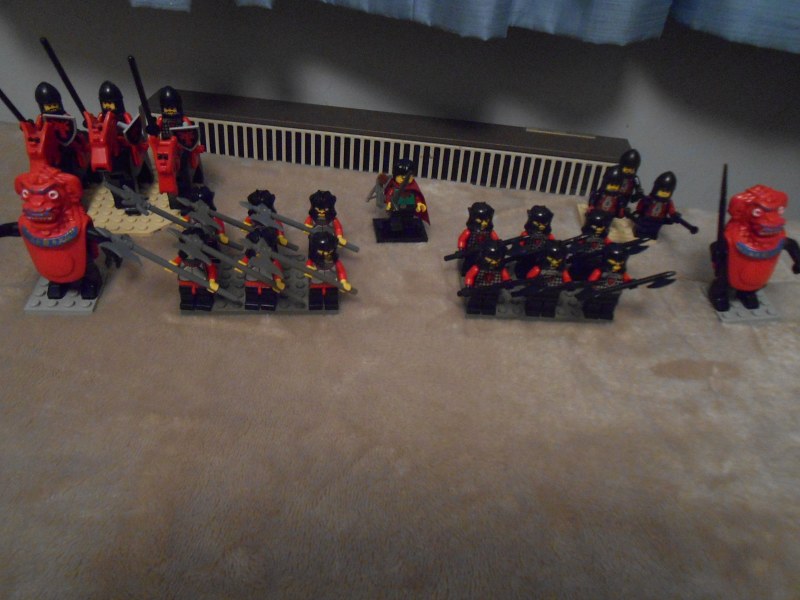 Lucia: "Oh, right! Hah! It's that wretched Magio! Looks like he stopped licking Varius' boots long enough to lead an army for once! Not much of one, though!" 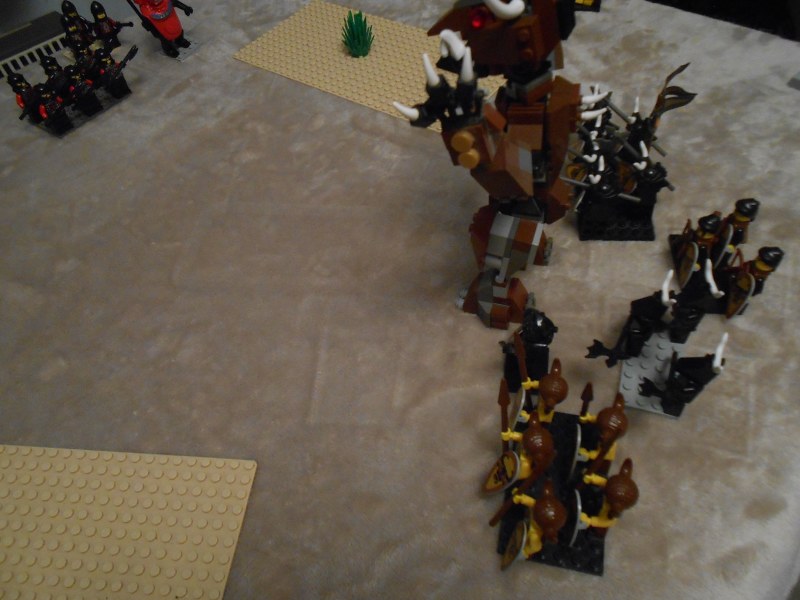 Lucia: "And he's attracted the ire of some of those filthy barbarians! Good! Let them kill each other while we slip past! They'd make a good addition to my collection, but that'll have to wait. Varius promised a gold coin for every barbarian we brought him, so let's do it, boys!" 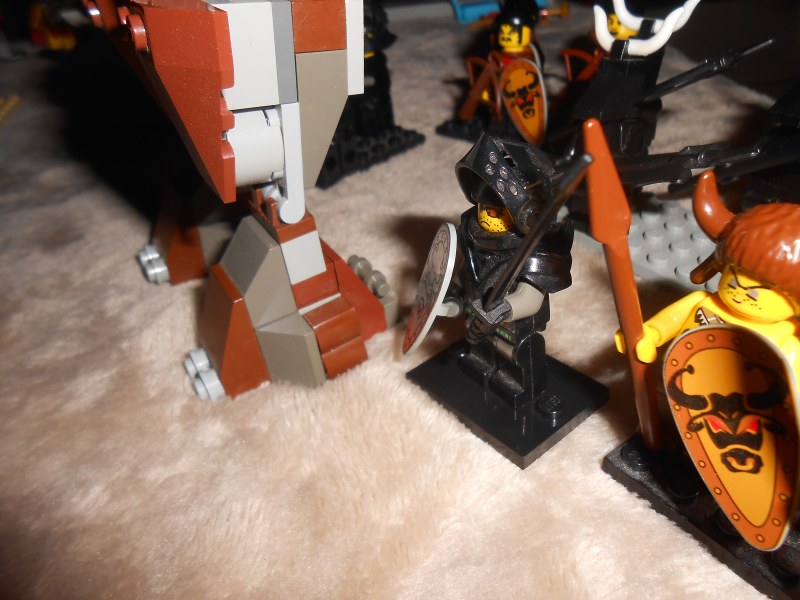 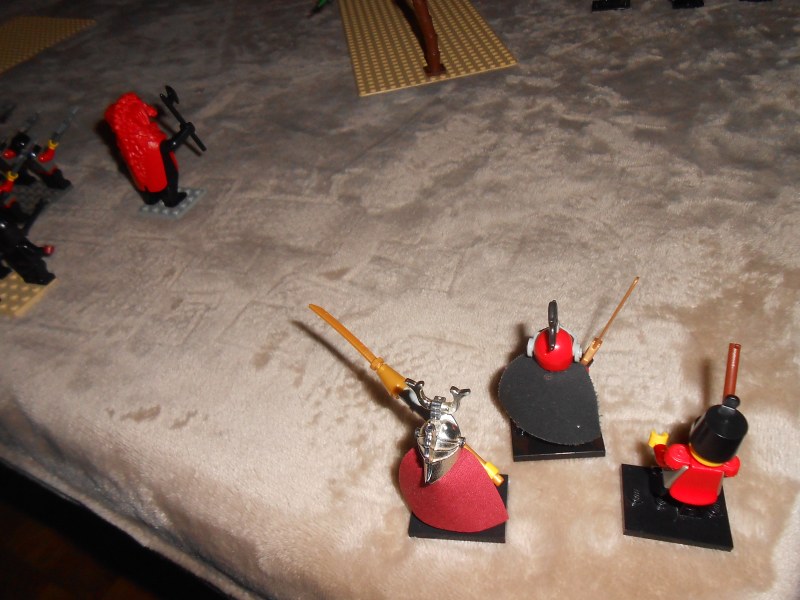 Lord James The Black, Princess Lorreaine and Aloysius Black happen upon the battlefield. 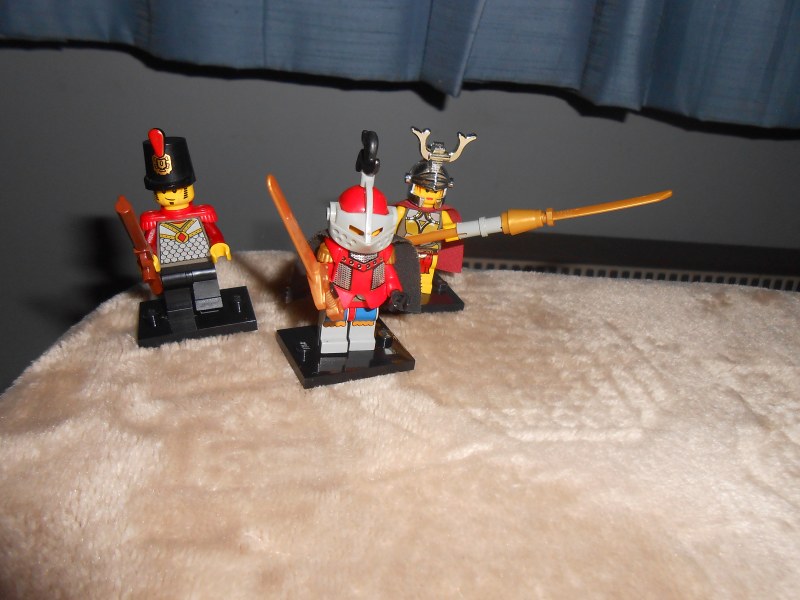 Lord James: "That screeching banshee over there has some of our soldiers! Let's gut her, and kill as much as the Falx and Bulls as we can while we're at it so they don't bother us later."

Princess Lorreaine: "We could help the Bulls as well. They fight the Falx, like we do, they may prove useful allies."

Lord James: "I doubt it. They already attacked us once."

Aloysius: "Can we just focus on rescuing our people...?" 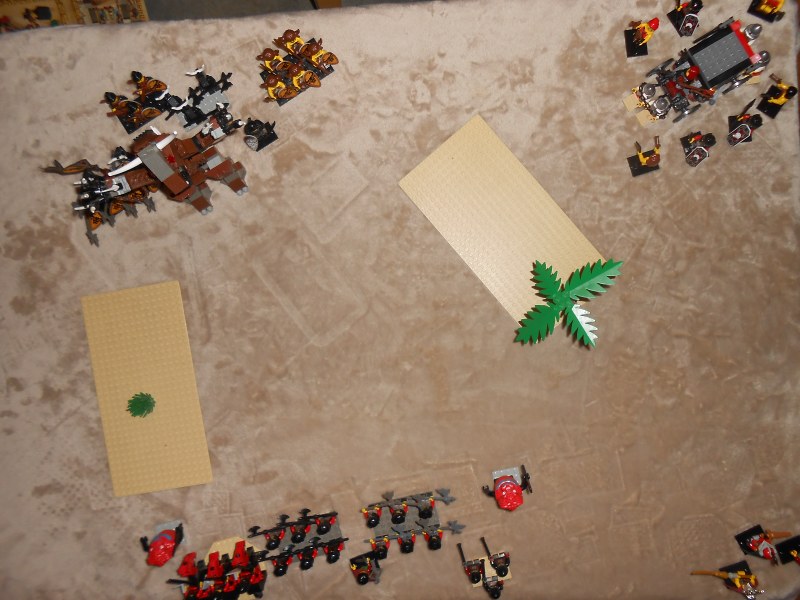 Welcome to 'Chains Are On'! A battle (intentionally) a bit more in the style of Zahru (though I lack the beige carpet).

Lucia's cutthroats: 1x Lucia (hero, brutal and sadistic), 4x cutthroats (pistol and hand weapon), 3x spear legionnaires. - Archduke
Objective: reach the corner of the map opposite to you with your cart and as many prisoners as possible (you have 6).

WIth 4 people pushing, the cart can move 10". Prisoners outside the cart need to have one minifig keeping an eye on them or they will try to run (it's enough to be within 3" of them as long as the mini isn't in combat).

Phalanx have the phalanx and compensating traits. Icons each have 1d6 SN dice.

Crimson Crusaders: (1 player per hero)
- Lord James the Black (cold-blooded, powerful knight, feared commander) - RedRover
- Princess Lorreaine (paladin of the Holy Flame, warrior princess) - Falk
- Aloysius Black (master engineer, marksman) - Duerer
Objective: rescue the captives. Optional: kill all the Falx to get a chance to ally the Bulls, or kill all the Bulls as well as the Falx.

Crimson Crusade battles are more hero-oriented so all heroes will have 2 HP.
Westeron Restored (Fantasy BrikWars)
My Twitch - My blog
Top

I'll leave this open for a couple more hours and then if no one's taken the remaining spots I'll play Lucia and let one of the guys controlling the crusaders also control Aloysius. Those of you who have signed up can already start sending orders.

Turn order will be randomized for the first round.
Westeron Restored (Fantasy BrikWars)
My Twitch - My blog
Top

Are we gonna get stats for the heros?

I'll take a team if there's one left over

Alright, you can have Lucia and her cutthroats. Everyone can start sending their orders.

@Falk: The heroes all have standard stats aside from having 2 hp.

James the Black and Rax have heavy armour, which means they move at half speed.

Heroes with Heroic Artifacts are Rax (his blessed shield), Lorreaine (her helmet), and James the Black (his armour).
Westeron Restored (Fantasy BrikWars)
My Twitch - My blog
Top

Is there somewhere I can find some background info on James the Black? I want some inspiration for feats and such

While the rest of the kingdom was off fighting their silly war against the FALX, Lord James was off conquering the eastern hinterlands. Vast forests and less-than=friendly natives led to the lasting image of untamable territory. Lord James begged to differ. The brutal subjugation of the Eastern Hinterlands at the hands of his army took many, painful years, but in the end the kingdom's domain stretched from the Western mountains to the eastern sea.

While stories of the atrocities committed by his soldiers(The burned villages, the crucifixations, and snuggle are but a few) chill the bones of even the most coldhearted men, James the Black was made lord of the eastern hinterlands by the king himself.

Having nothing better to do, Lord James went with the queen to conquer new territory.

Weapons: 6-foot long broadsword. While not using a shield may seem odd, there are some things you don't have to worry about when you're a six-and-a-half foot tall dynamo of death

Skills: Other than being an powerful, raw swordsman, Lord James the Black is an expert tactician.

I... have no idea what to do.
I make apocalypses and apocalypse accessories.

Read some old battle reports where Warhead played the Bulls, I'm sure they'll inspire you.