2 rounds in one day thanks to speedy orders! 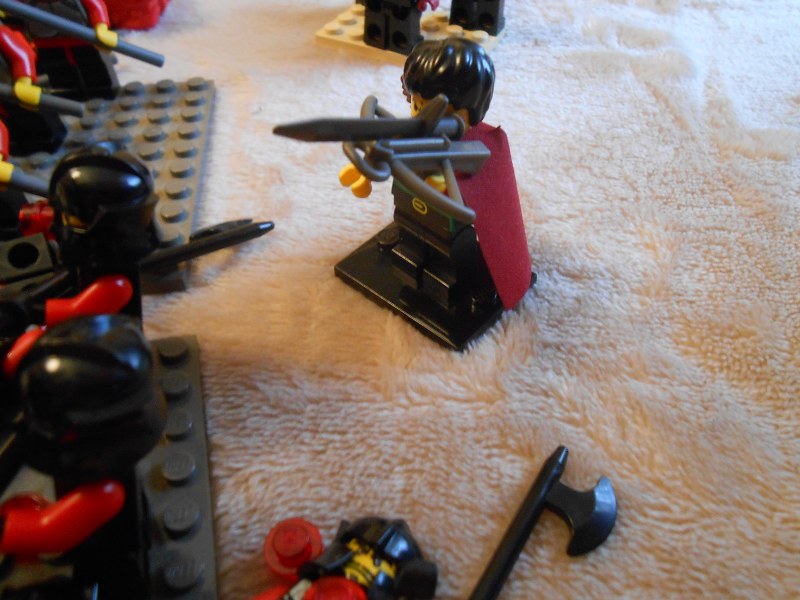 Magio loads his sword into his crossbow, combining the damage of both! 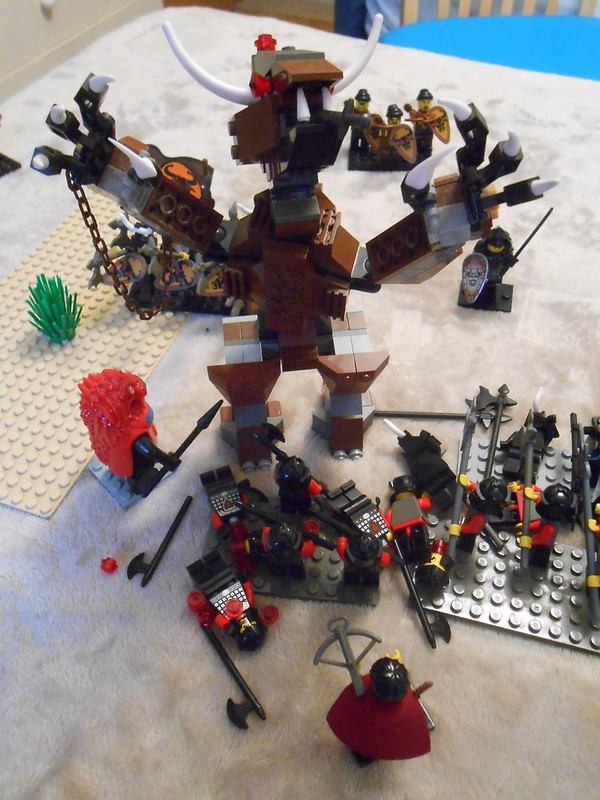 Lots of 6's mean he damages the avatar further, nearly killing it! 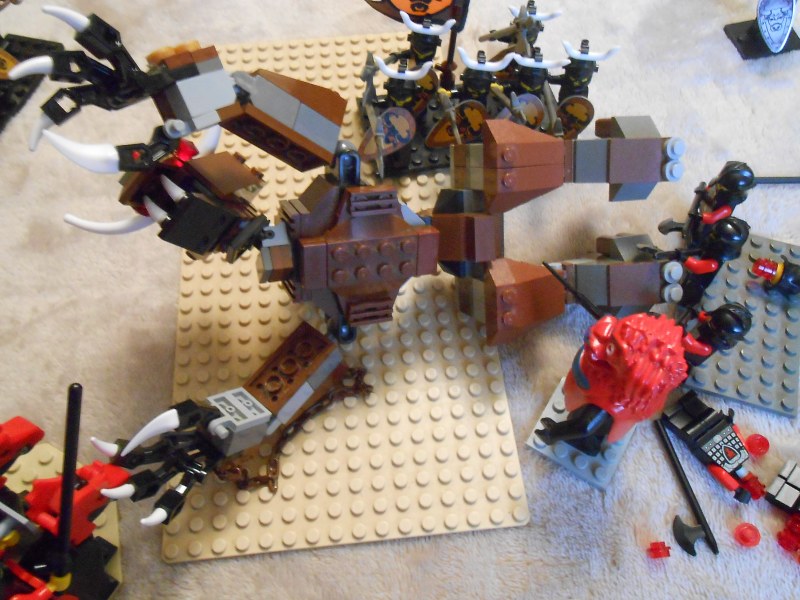 The death seekers and war beast finish the job. 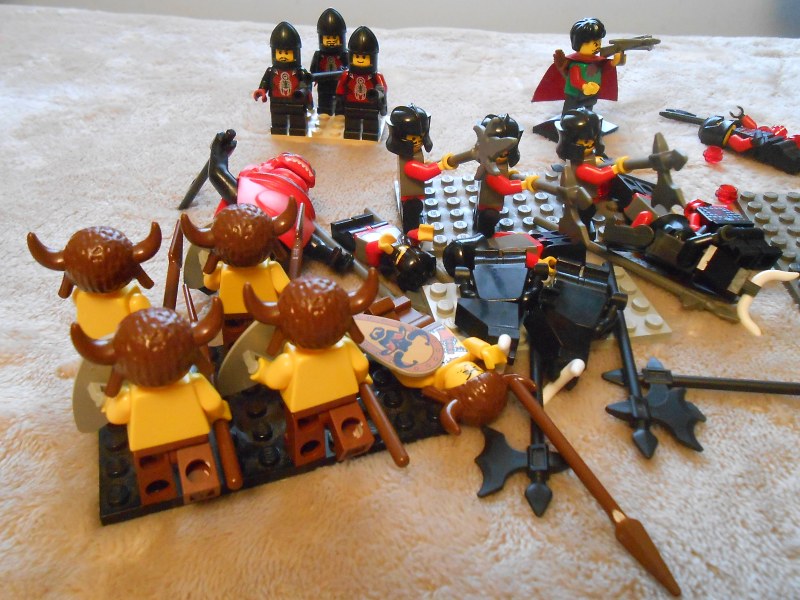 Halberdiers kill the icon, while gunmen shoot a shieldbearer. 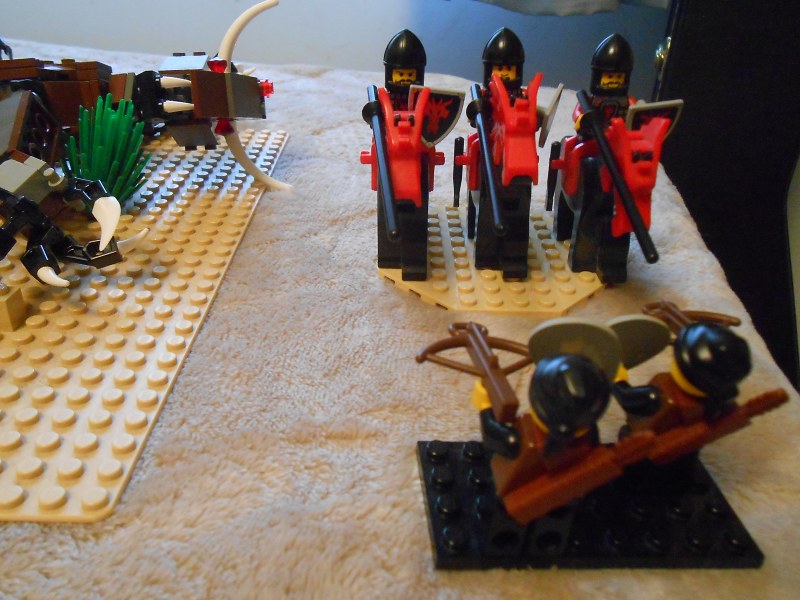 The lancers charge the unfortunate crossbowmen... 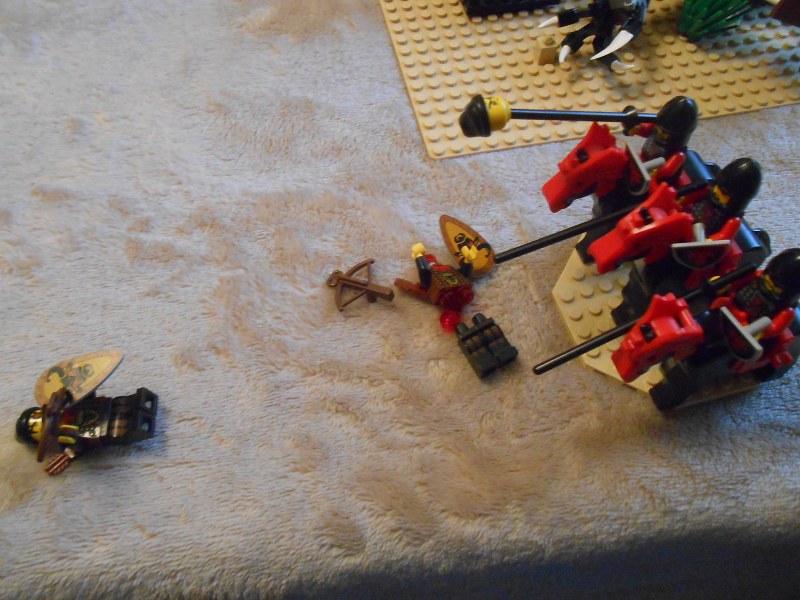 One is killed outright, the other miraculously survives and is knocked away and disrupted (which ironically enough saves him from taking further trampling damage).
Westeron Restored (Fantasy BrikWars)
My Twitch - My blog
Top 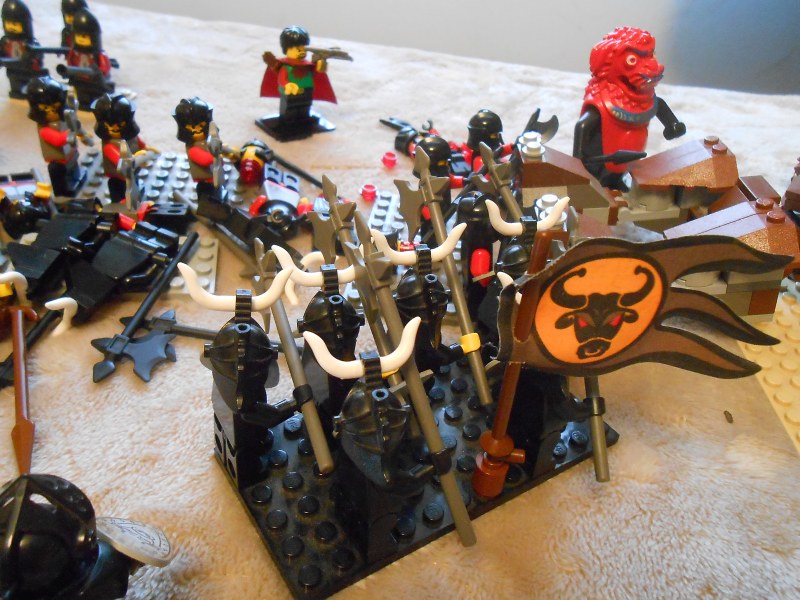 The phalanx wanted to go for the war beast, but found the avatar's corpse in the way, so they marched around, into the death seekers. Phalanx are heavies and can't move and attack on the same turn, but they're in a good position to start the fight on their next turn. 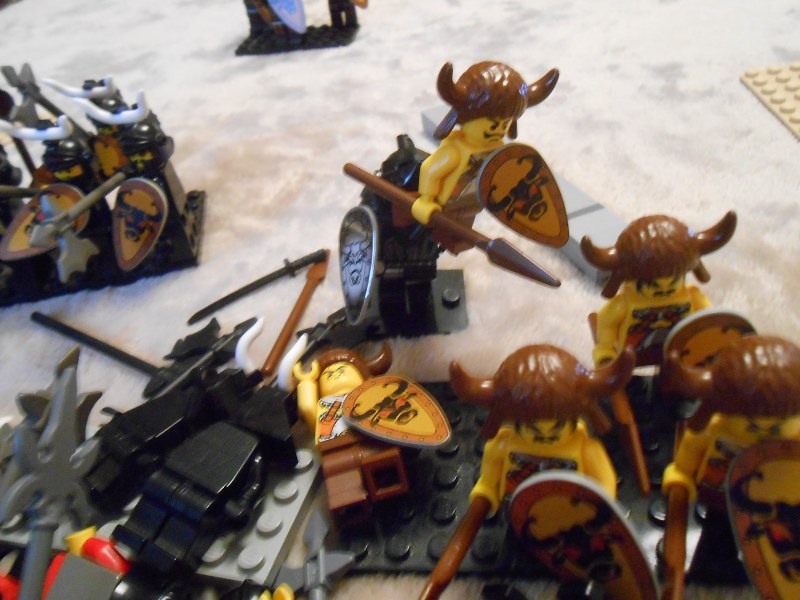 Rax picks up a shieldbearer. "YOU FLY! RAAHH!" 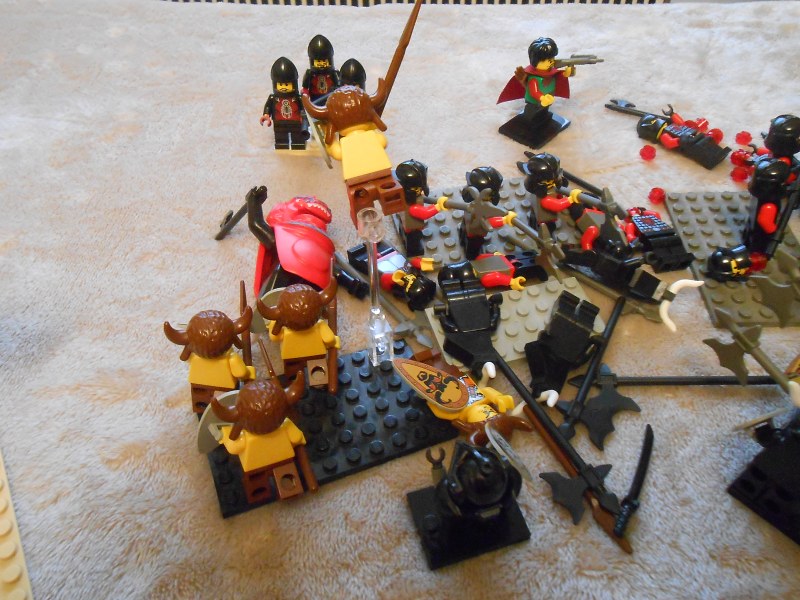 He throws him at the gunmen... 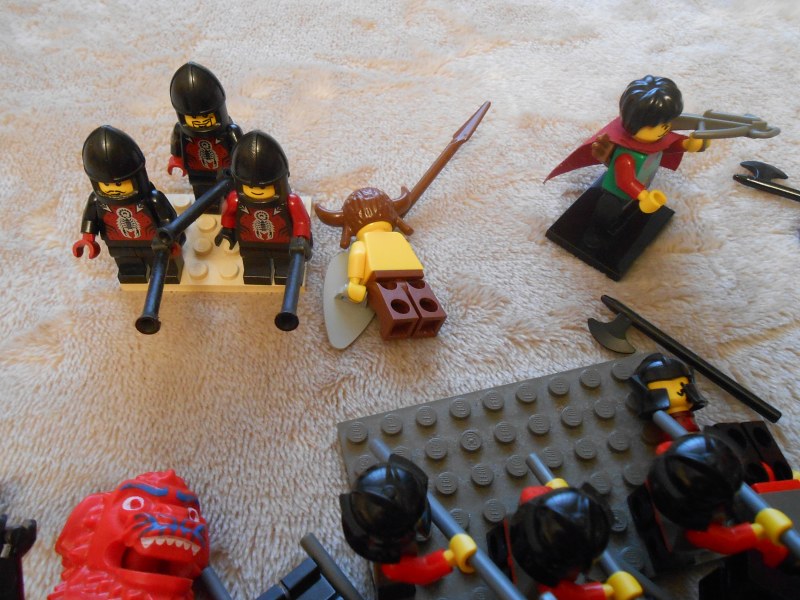 The throw fails and the shieldbearer ends up disrupted in a precarious position. 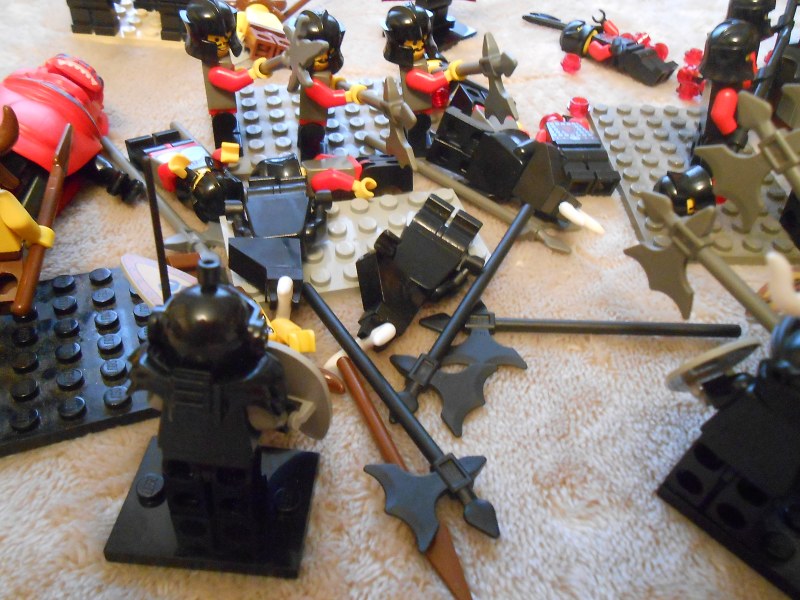 Rax, much to his chagrin, isn't close enough to reach an enemy. 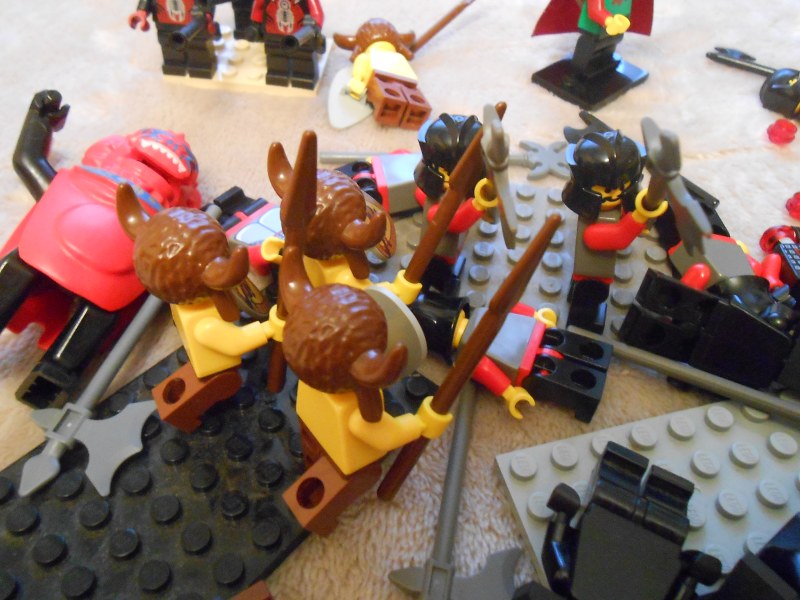 Shieldbearers choose the target they can more safely reach, move in and kill a halberdier. 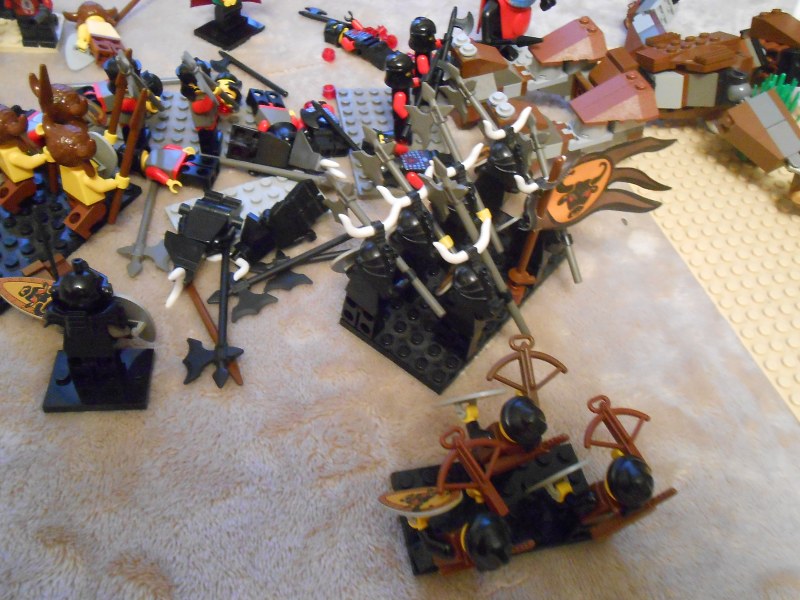 Crossbowmen move up and shoot a death seeker. 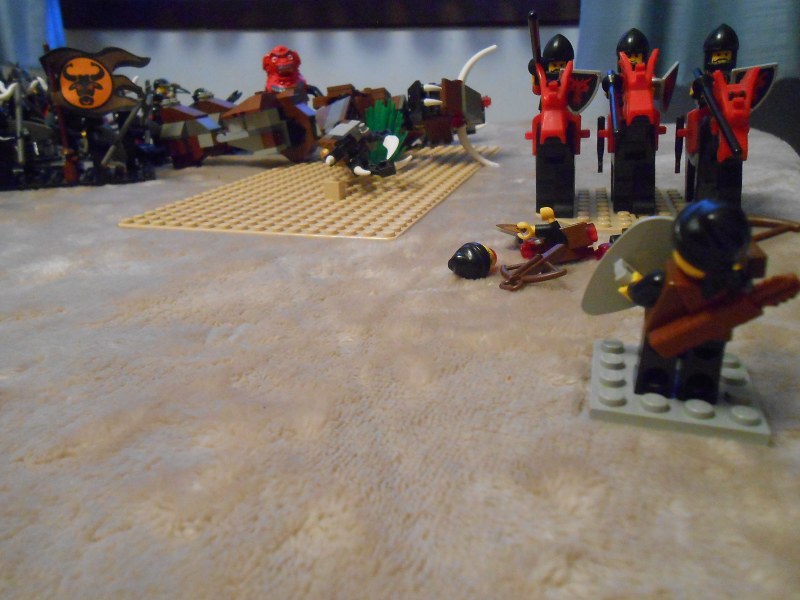 The disrupted crossbowman picks himself up and fires at the lancers, but, probably still dizzy, crit fails and misses.
Westeron Restored (Fantasy BrikWars)
My Twitch - My blog
Top 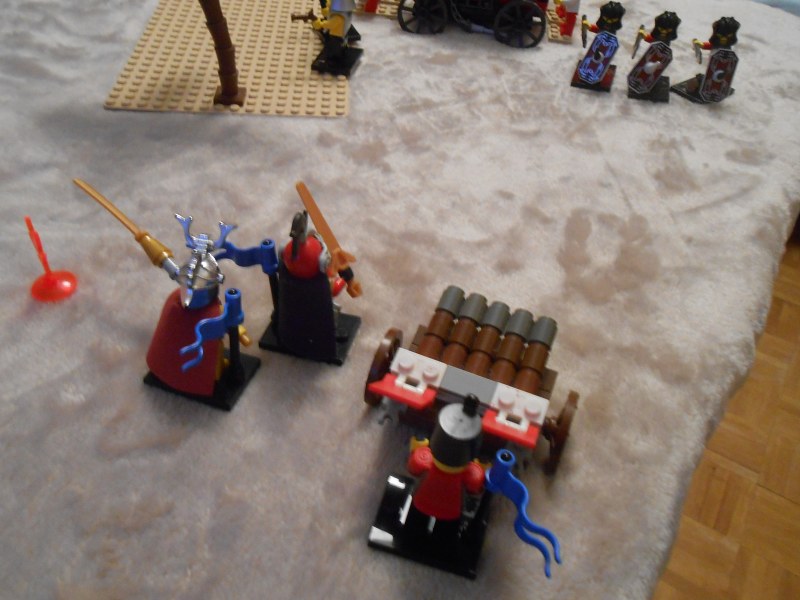 Lord James continues his steady advance. "Visors down, arms up, shields in front of you! Look lively!" he says, reliving his conquest of the eastern hinterlands and seemingly unaware he's giving orders to royalty.

Despite the awkwardness of the situation, his tactical presence does remind himself (and his allies) to keep their wits about them and protect themselves, giving them +1 armour against the next attack that will hit them. [I kinda messed up since he was supposed to go last so this effect won't come into play until the start of round 3] 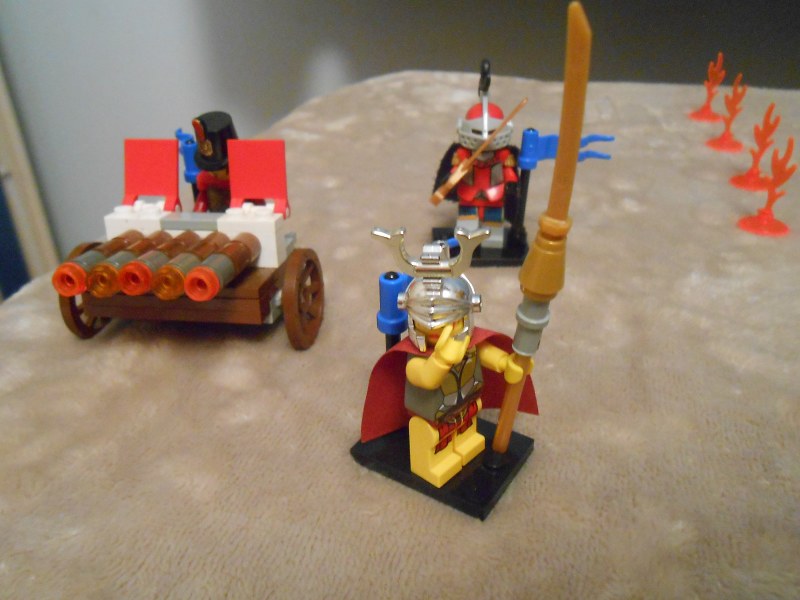 The ribault opens fire across three arcs. With the enemy partially hidden behind their tower shields, this seems somewhat optimistic even for a skilled gunner like Aloysius. But wait! Princess Lorreaine is sending the light reflecting off her helmet into the legionnaires' eyes... 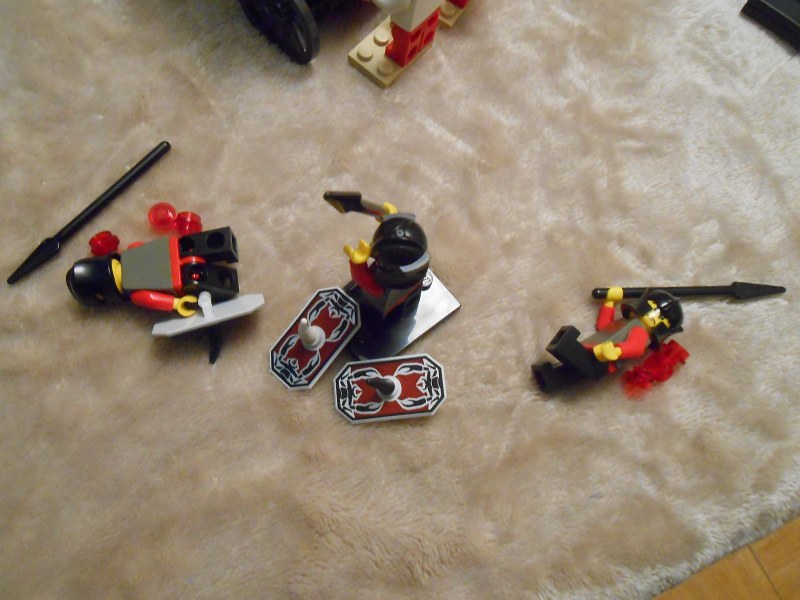 This causes them to drop their shields, which leads to two of them getting killed by the ribault. 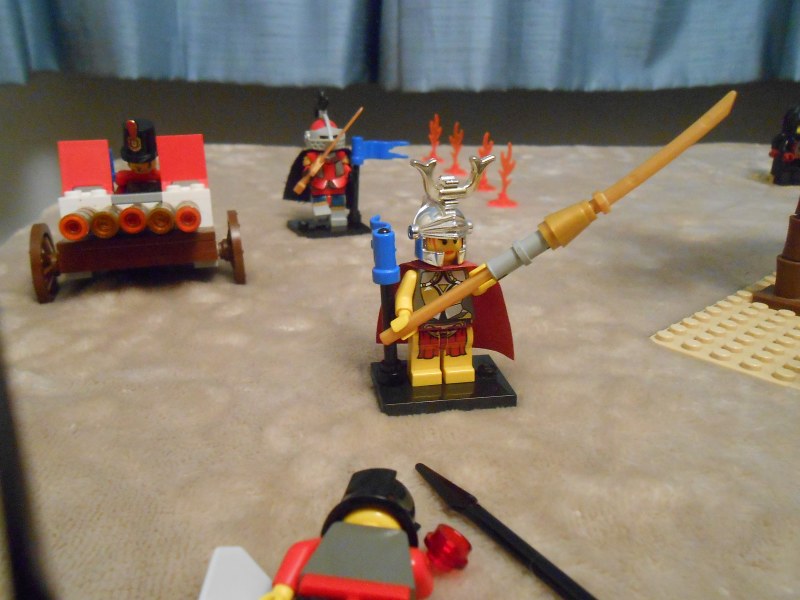 Lorreaine then takes a defensive position in front of her allies. 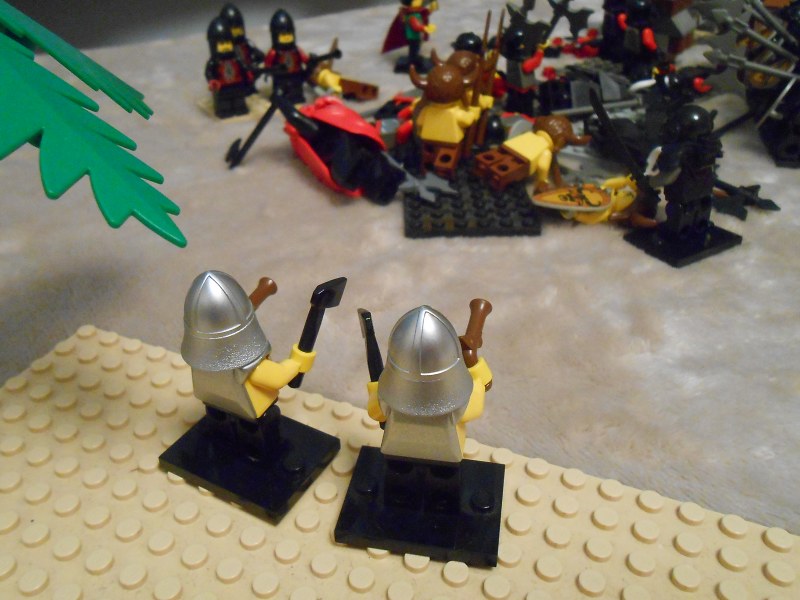 Cutthroats in the front move up and fire, this time without aim penalties. It results in one shieldbearer falling. 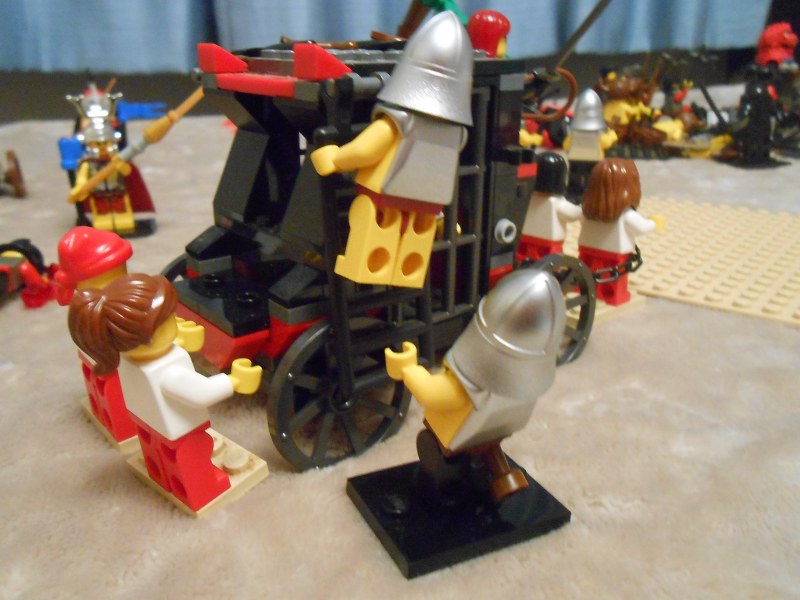 The other two throw their weapons to the top of the cart and climb it. 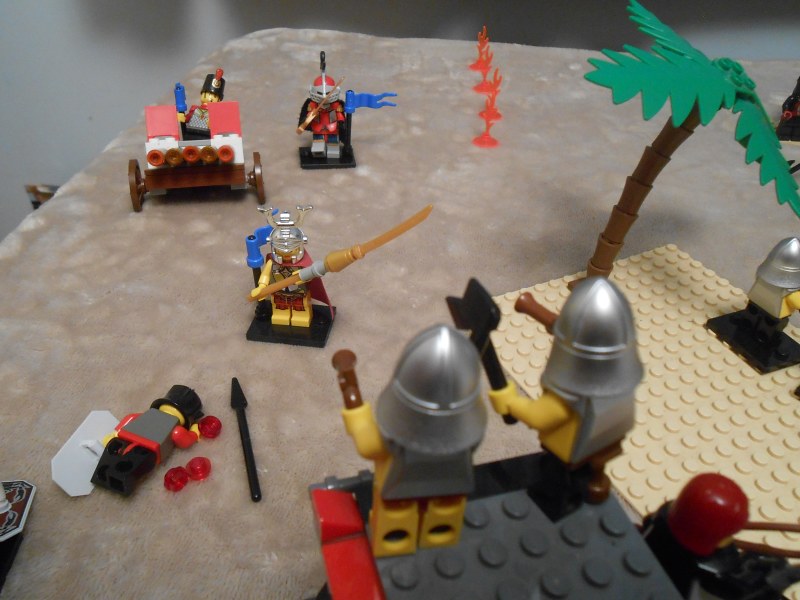 The height of the cart gives them some extra range, but Aloysius is still 3" too far away, not to mention partially covered by the ribault. They try their luck anyway and shoot at him, one actually managing a hit, but it doesn't beat Aloysius' armour. 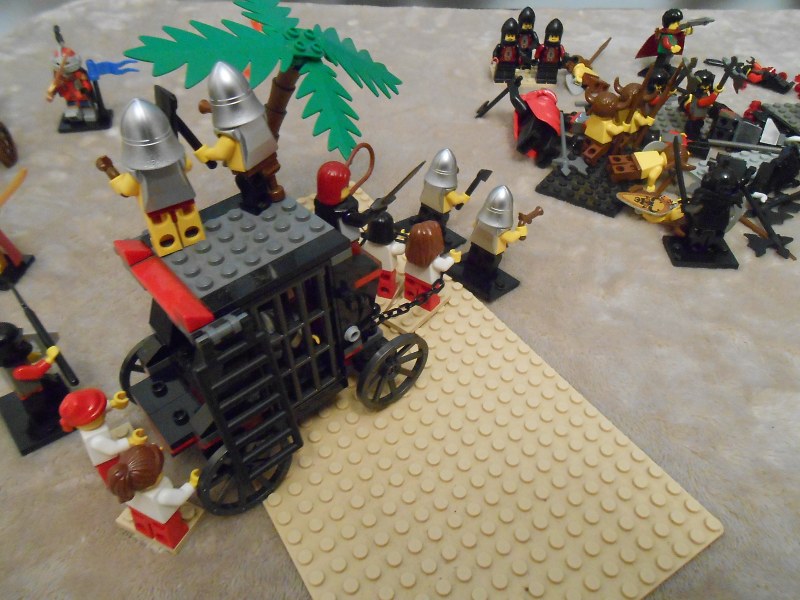 The cart then advances towards the gunmen. 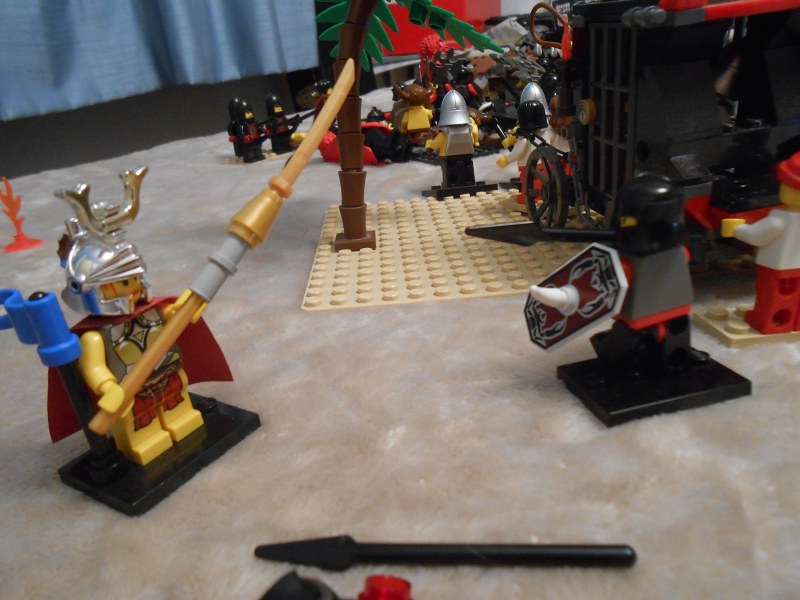 The legionnaire keeps pace with it, careful to stay out of Lorreaine's reach, and ready to (at least attempt to) react should she try something. 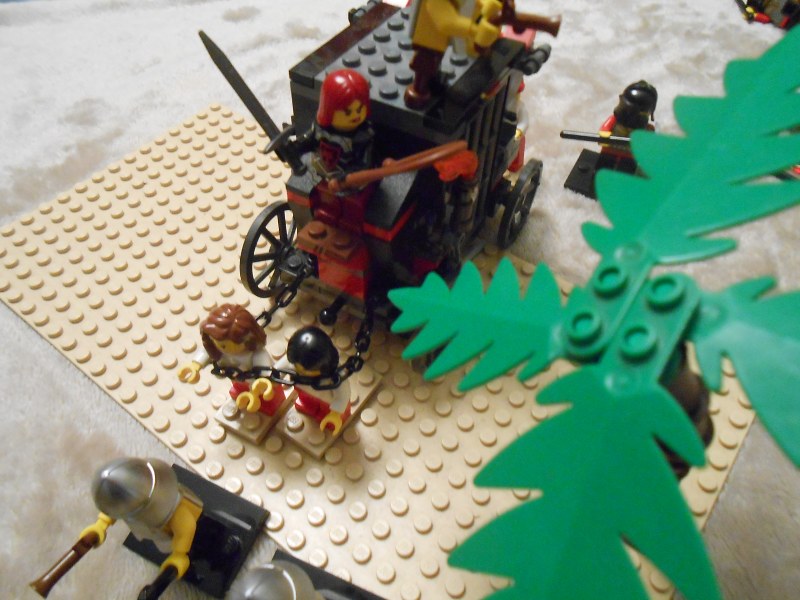 "Why do they have artillery, and we don't?!" Lucia says angrily. 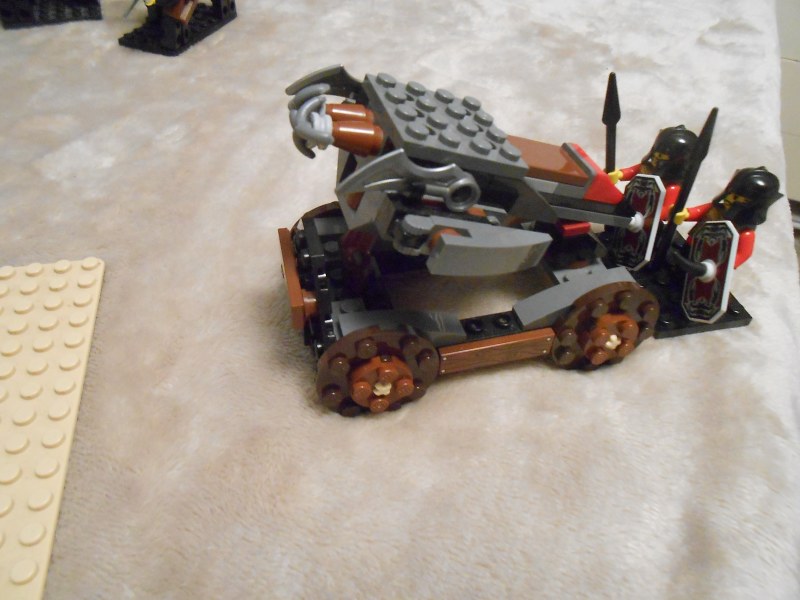 As if on command, a Falx ballista, complete with crew, rolls onto the battlefield. Maybe they got lost looking for a different battlefield or position to reinforce? With the current (lack of) Falx leadership, anything is possible. It is a size 3 Gun with Use: 5, Range: 14 and Damage: 3d6. If the crewmen operate it together their highest roll counts. [Critical success] 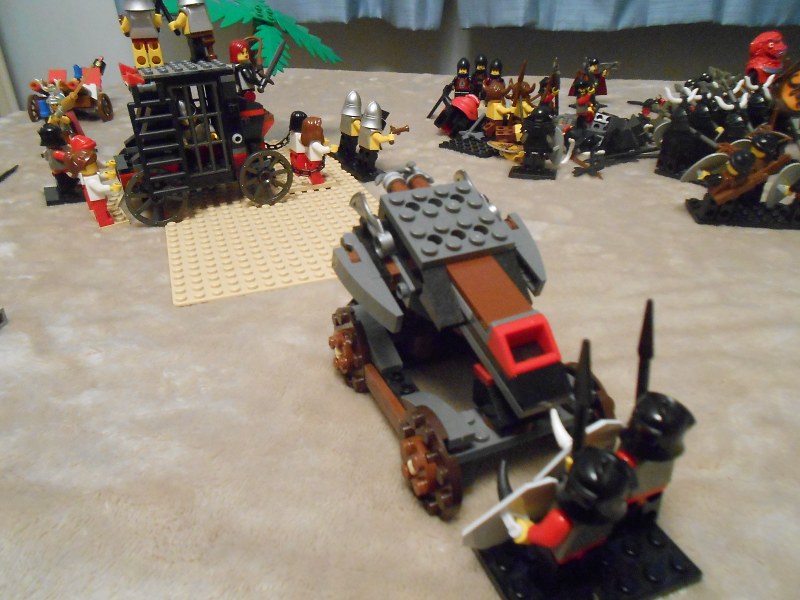 "Now THAT is what I'm talking about!" Lucia jeers. 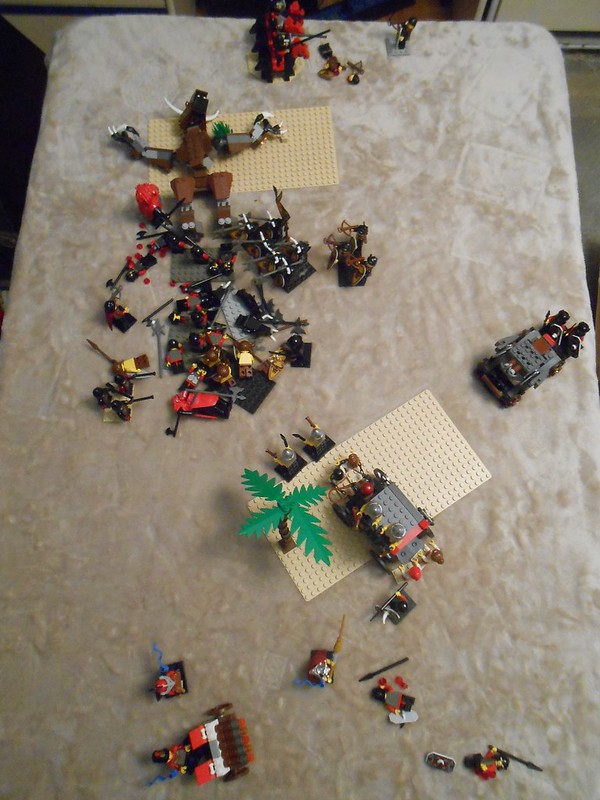