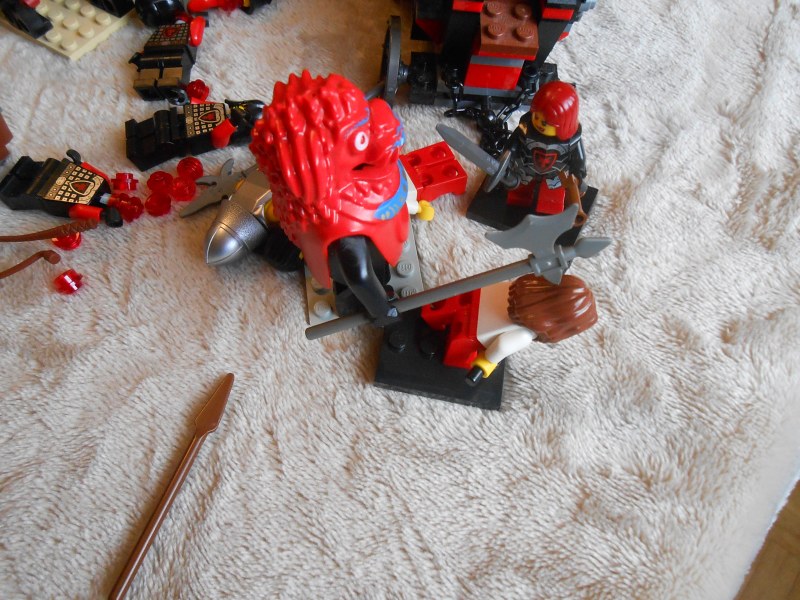 The unfortunate prisoner gets knocked out again. I can just feel an ache at the back of my head looking at this picture. 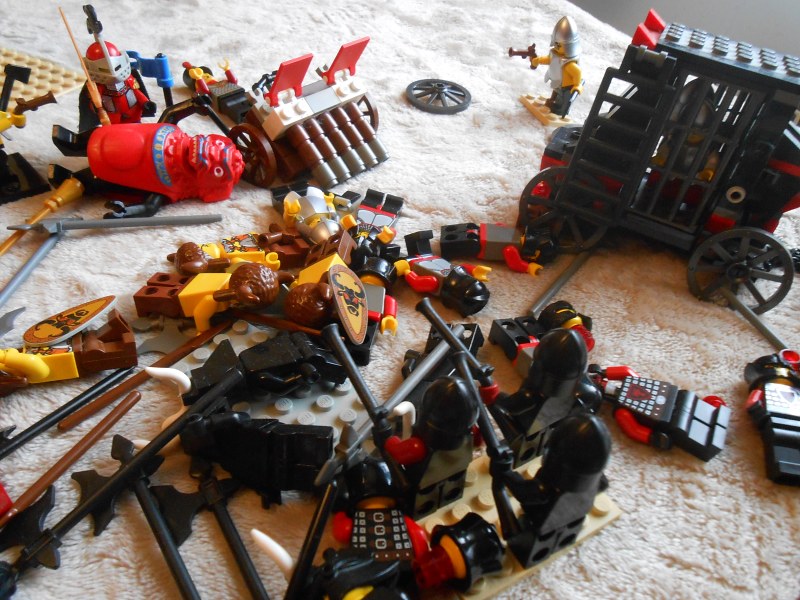 Gunmen are on fire. One misses, but the other two deal 23 damage to Aloysius despite his cover, finishing him off. It's all up to Lord James now! 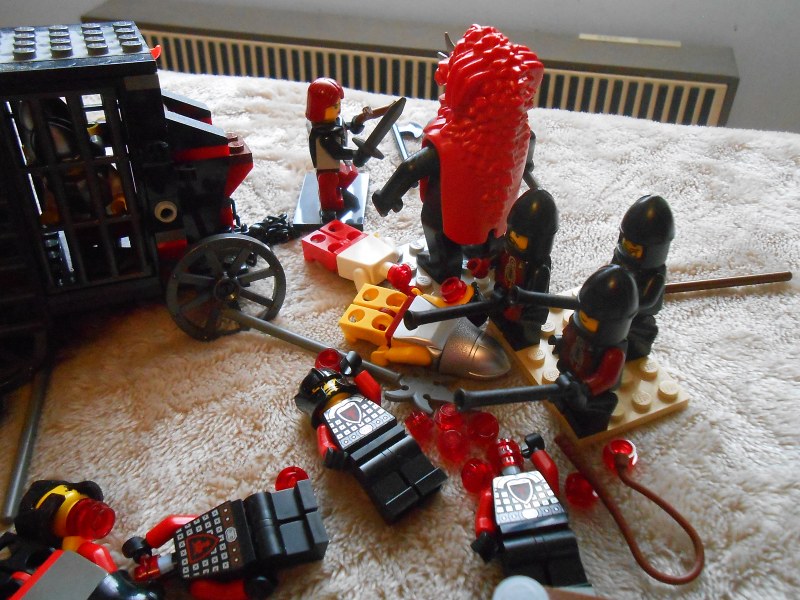 They then move to defend the wagon. 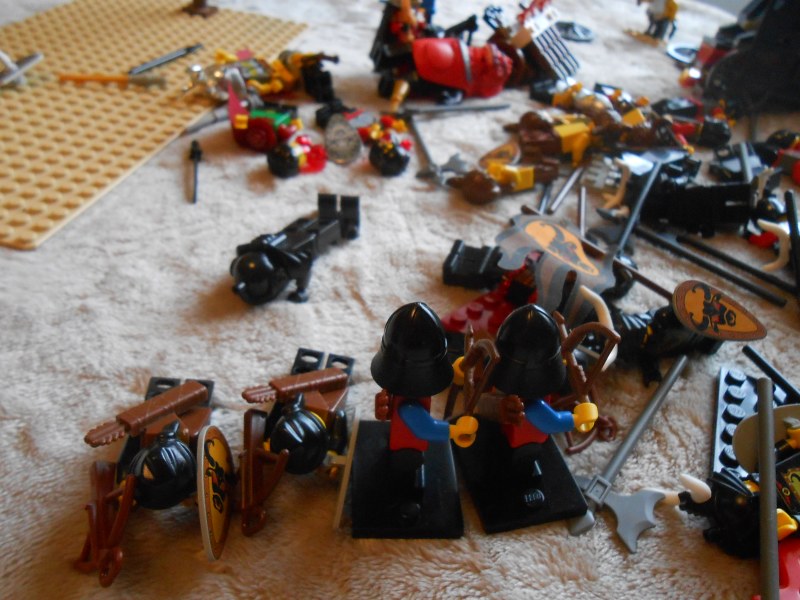 The marksmen close in and, in range now, kill the cutthroat they failed to kill earlier. One remains. 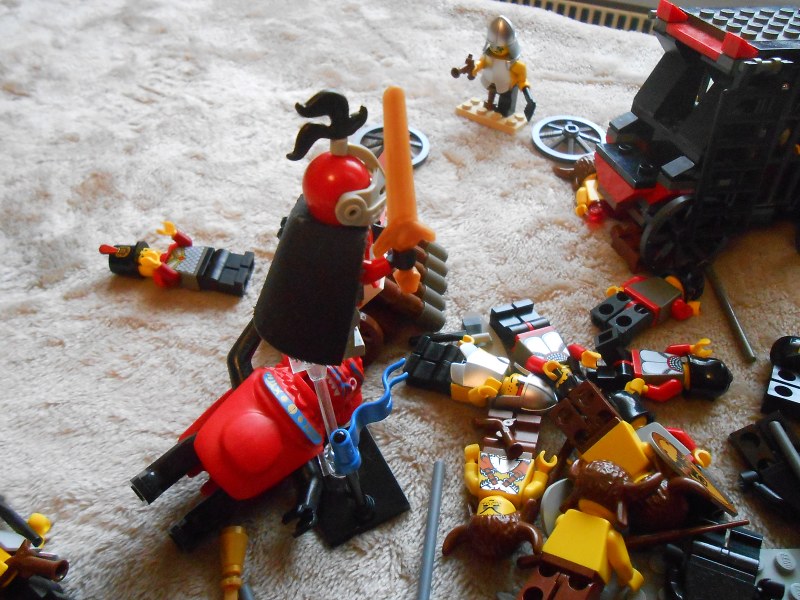 James bounces on the war beast's belly like a trampoline, and then launches himself forward. 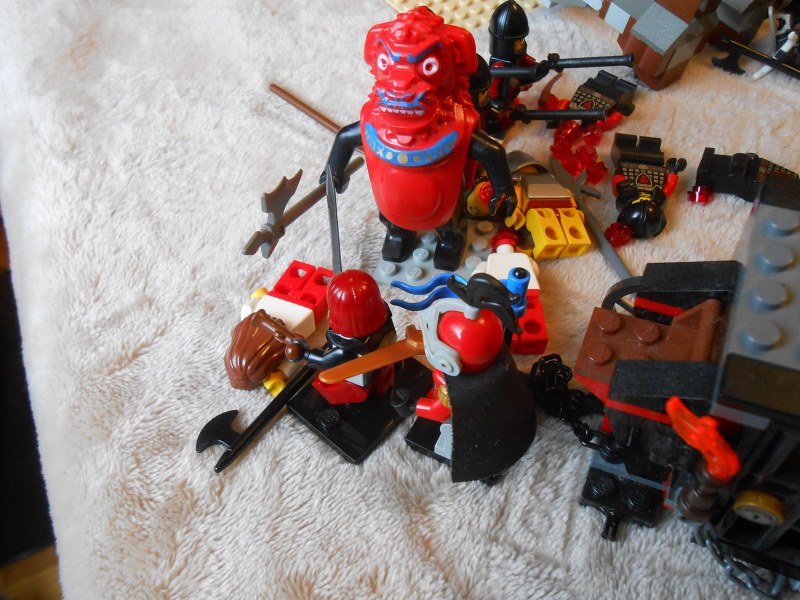 Critical success! He strikes down hard with his sword as he lands, gaining 1 MOM... but only does 8 damage. 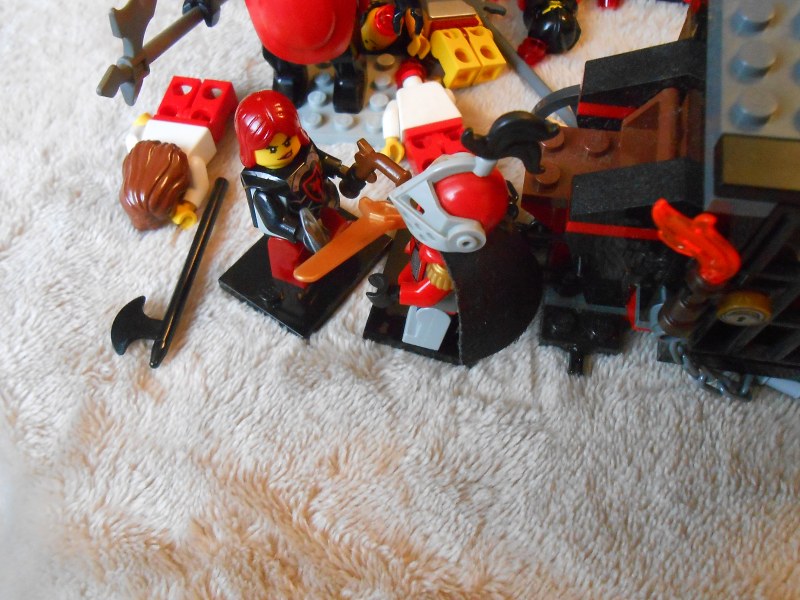 He tries a normal attack, but by now Lucia is ready to parry most of the damage. She reverses the grip on her pistol and delivers a shattering blow with it, but James' armour is strong enough to hold on. 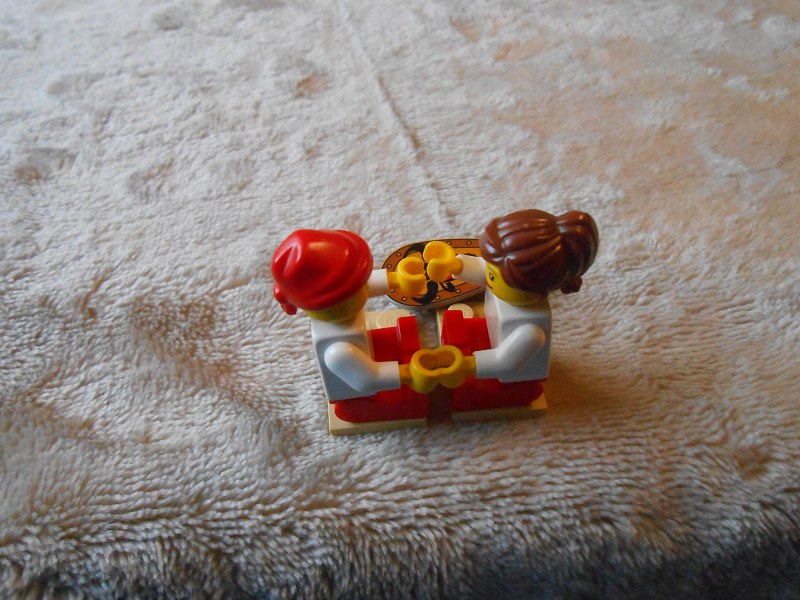 The former prisoners sit down and play patty cake. 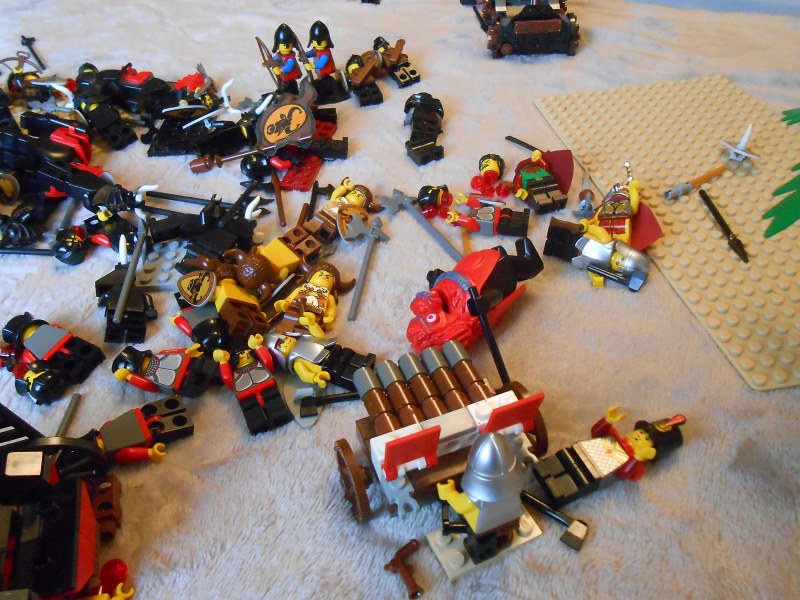 The last cutthroat aims the ribault at the marksmen. Though out of range, he fires anyway, and predictably misses. 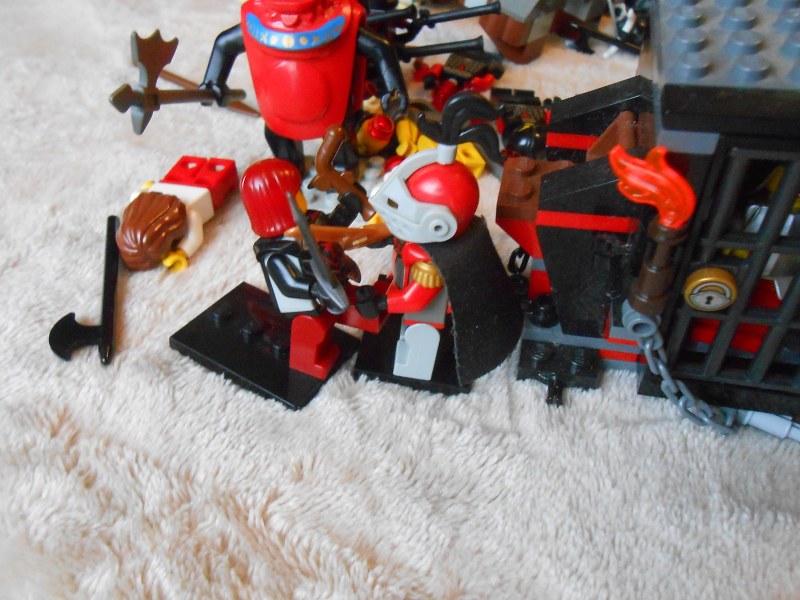 Lucia tries to go for a less than honourable kick to leave Lord James defenseless... 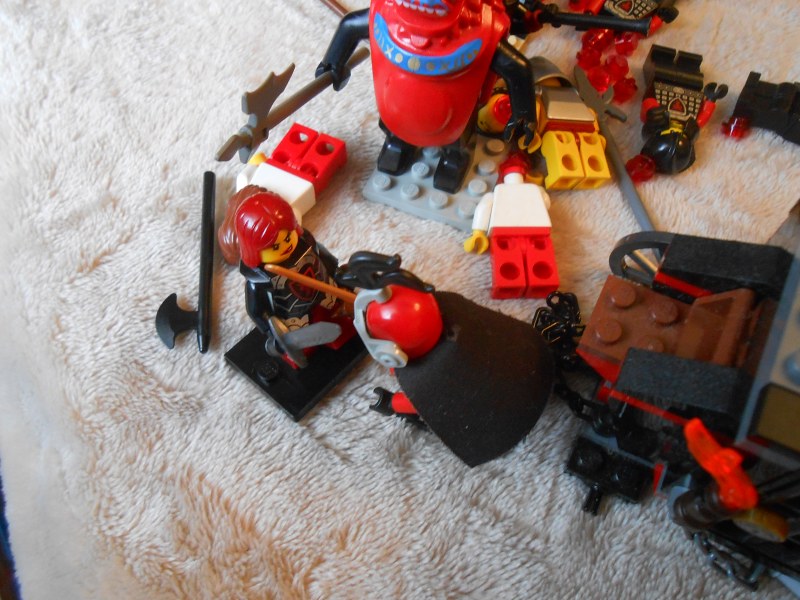 The feat fails and Lord James gets an automatic hit against her instead, but once again fails to beat the tough Falx armour. 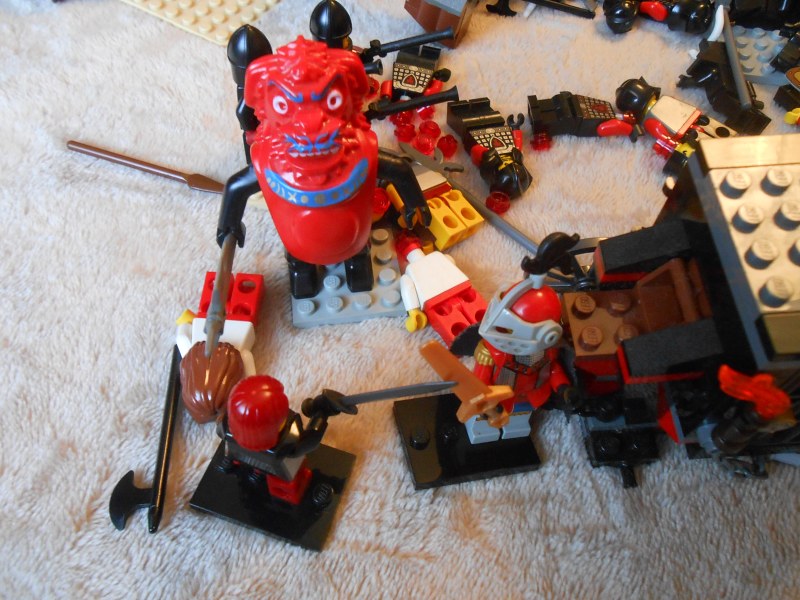 Lucia then overskills her regular strike, but Lord James overskills his parry as well, locking the two combatants in a stalemate for now. 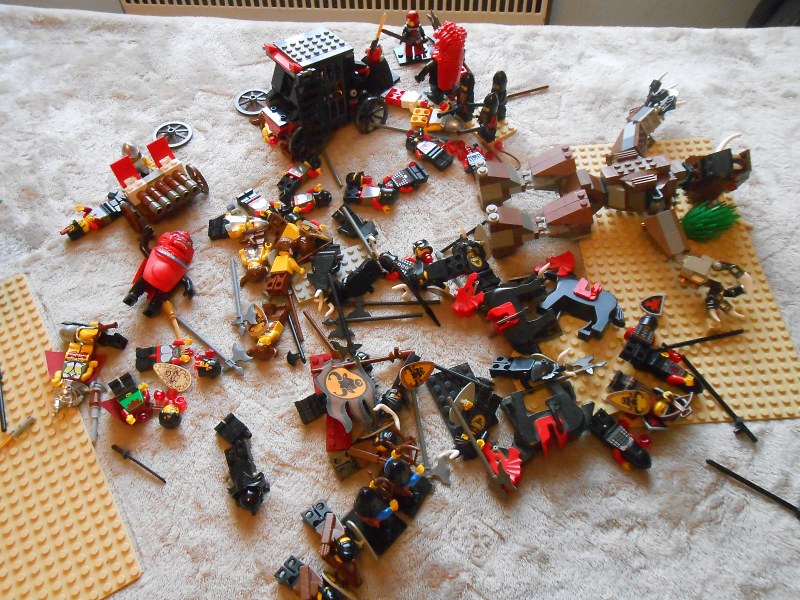 Lorreaine lays in the sand and plays dead

I reveal that Rax was really three bull soldiers in a costume and they pop out and kill people!
I make apocalypses and apocalypse accessories.

Tactical retreat. You can just play it out at this point

They try and make it four enemy factions in four rounds and fire at James the Black. The warbeast joins in as well. If it goes beyond that you can just play it out.
Times banned by Natalya: 8 (+ 1 alt).

This really was a coup for the Falx

Yeah I didn't expect them to do so well, kudos to TheVengefulOne for defeating the Bulls with what I thought was a slightly inferior force (although I did my best to make them about equal strength), without his reinforcements I wouldn't have fancied Lucia's chances.

At first I thought I didn't give Lucia's faction enough troops and they'd be doomed, but she did very well as well, rolling critical successes on her first 3 feats.

Of course, it's not over yet, as we've seen in 'The Arktifakt', a hero with heavy armour is no joke. I was already thinking about playing it out, but wanted you guy's perspective on it. I'll post the conclusion (and probably, the sign-up of the next battle of the Crimson Crusade) tomorrow.

It's a good thing I still have some plans for this story arc, 'cos the Bricklink seller I ordered the parts from that I needed to make the imperial figs people had posted in the armoury is being extremely slow.

Honestly, I don't know if I could've beaten the Bulls without Lucia's cutthroats coming in and finishing off the shieldbearers. The power of teamwork I guess!
Times banned by Natalya: 8 (+ 1 alt).

On the other hand, I felt outnumbered from turn zero and even if I had used the SN dice (

) I don't think I would have done too much better. The dice turned against me after what looked like a decisive first turn

A good sign of a good battle is if everyone feels like the underdog, so kudos to you, Bragallot.
I make apocalypses and apocalypse accessories.

The dice are usually the most important factor, yeah.

With the sprint rolls I made, the Bull army got a good charge off, but may have gotten a bit more spread out than intended as well. Poor Rax only got to make an attack in round 3 and that was after he'd already been cut down, crossbowmen didn't get a volley off in the initial engagement either (but then, they usually don't kill much anyway

I thought the phalanx would do a little better but I think they'll be the type of unit that'll be better in higher numbers and bigger battles with more units to stop them from getting outmaneuvered. Free deflection against anything hitting it from the front and 5 armour is no joke. Not being able to move and strike at the same time (they're also heavies) is a bit of an issue but less so with ranged support that'll force enemies into them, and in the end they're still swinging two-handed weapons at your face, which is pretty massive against units with deflection. Just in this battle they got outmaneuvered pretty hard.

The Falx are kinda cursed though, they didn't exactly lose in Enemy At The Gates (first battle they appeared in) but they definitely didn't win either, they lost in Freedom's Blood, Winter War, First Strike, and After the Rift and Mill Village raid. That's 6 battles they've been in without a win. So you never know if the dice might turn against them again, even in a situation that's looking favourable.

Honestly the whole "can't move and attack in the same turn" thing just feels too limiting to me. It feels like it makes kiting way too easy and takes the teeth out of the phalanx. Maybe they'd be better off with half movement on any turn they attack or some other negative modifier, but in this battle I honestly felt like they were the least of my worries, when they should have been tough opponents.
Times banned by Natalya: 8 (+ 1 alt).

Well, they should slaughter most other infantry in a frontal engagement, in bigger battles, they'll probably be better.
Westeron Restored (Fantasy BrikWars)
My Twitch - My blog
Top
Post Reply
12 posts • Page 1 of 1