Crusade's End - Send orders for Round 3!

Re: Crusade's End (Need Round 2 orders)

Ah, sorry for the late orders, I've had some stuff come up.

Godfrey will carefully (CAREFULLY) turn around and begin waving his sword around, trying to keep his balance and maybe even kill some enemies! Joul will begin climbing up Godfrey's pile of horses to get a better vantage point. The paladin will assist Godfrey primarily by warding off attacks.

The Marshal of the bloodguards will attempt to do a sweeping blow that cuts the heads of both halberdiers and their halberds in one swing. The other bloodguards will keep moving Lara forward towards the portal, primarily ensuring that she isn't in any danger.
That's Supersonic Spaghetti Warrior to you, sir. 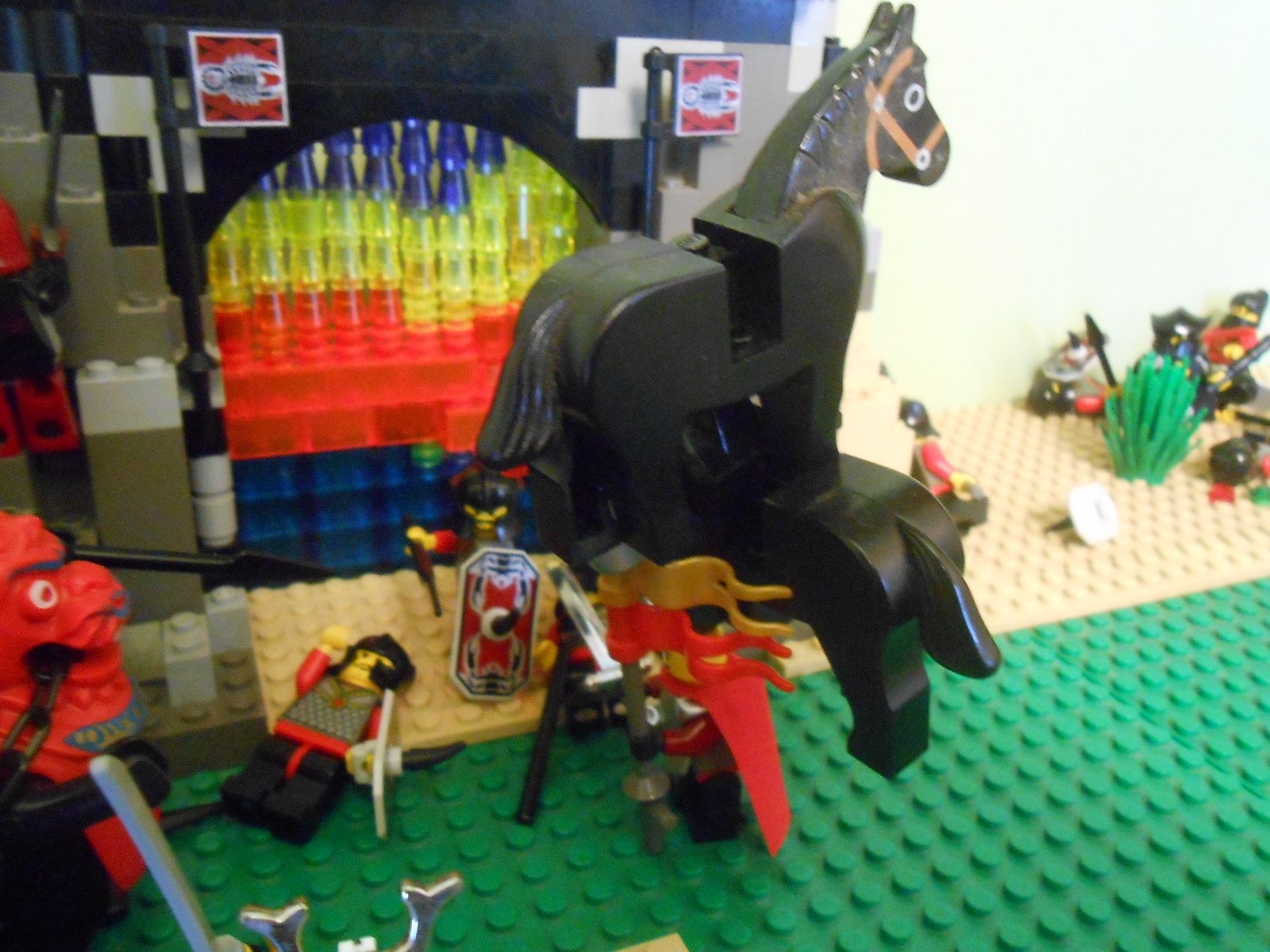 Godfrey swings his sword through one of the Falx, careful not to drop the horses from his head. 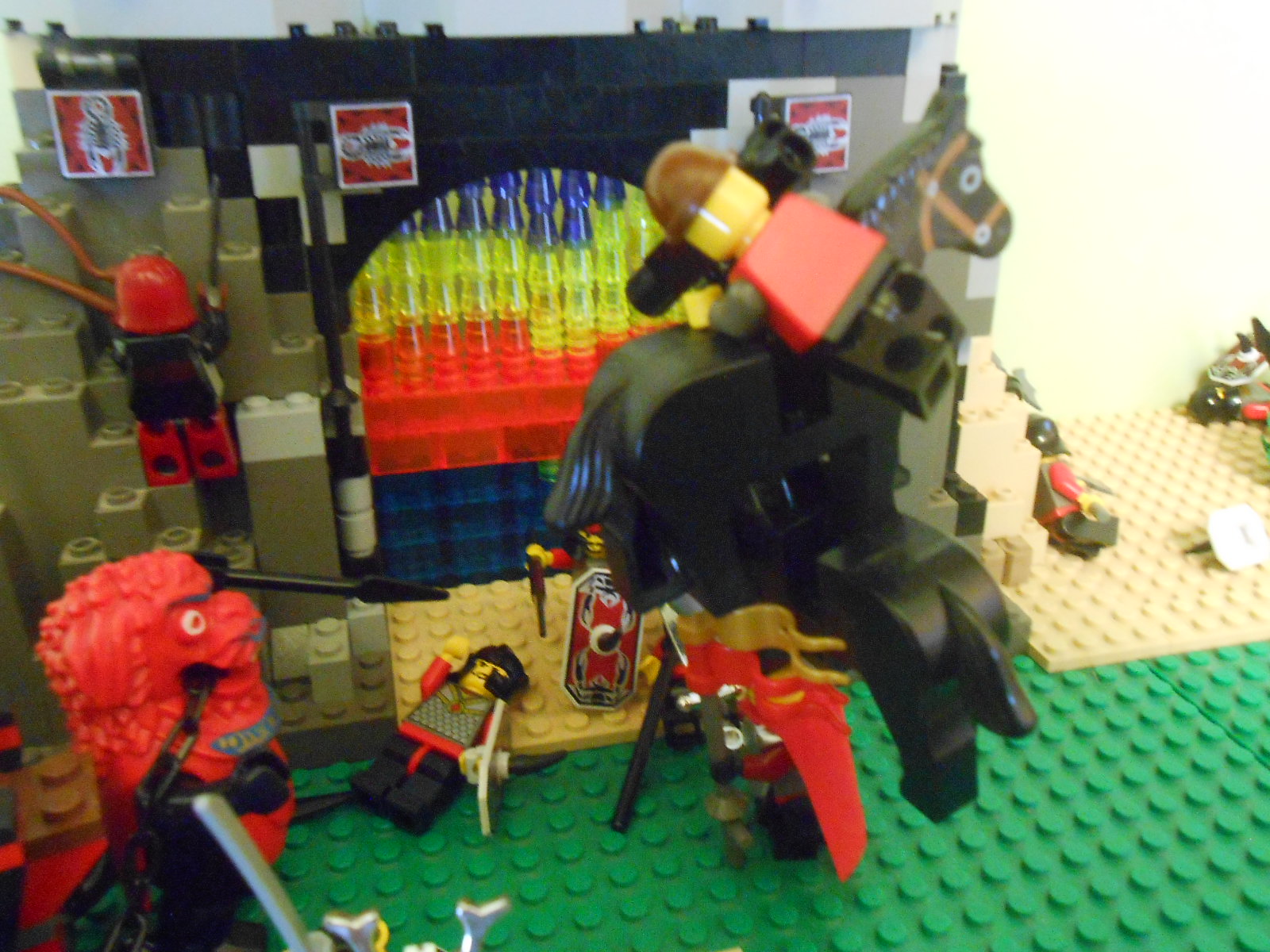 Joul leaps to the top of the horses to get a better vantage point. 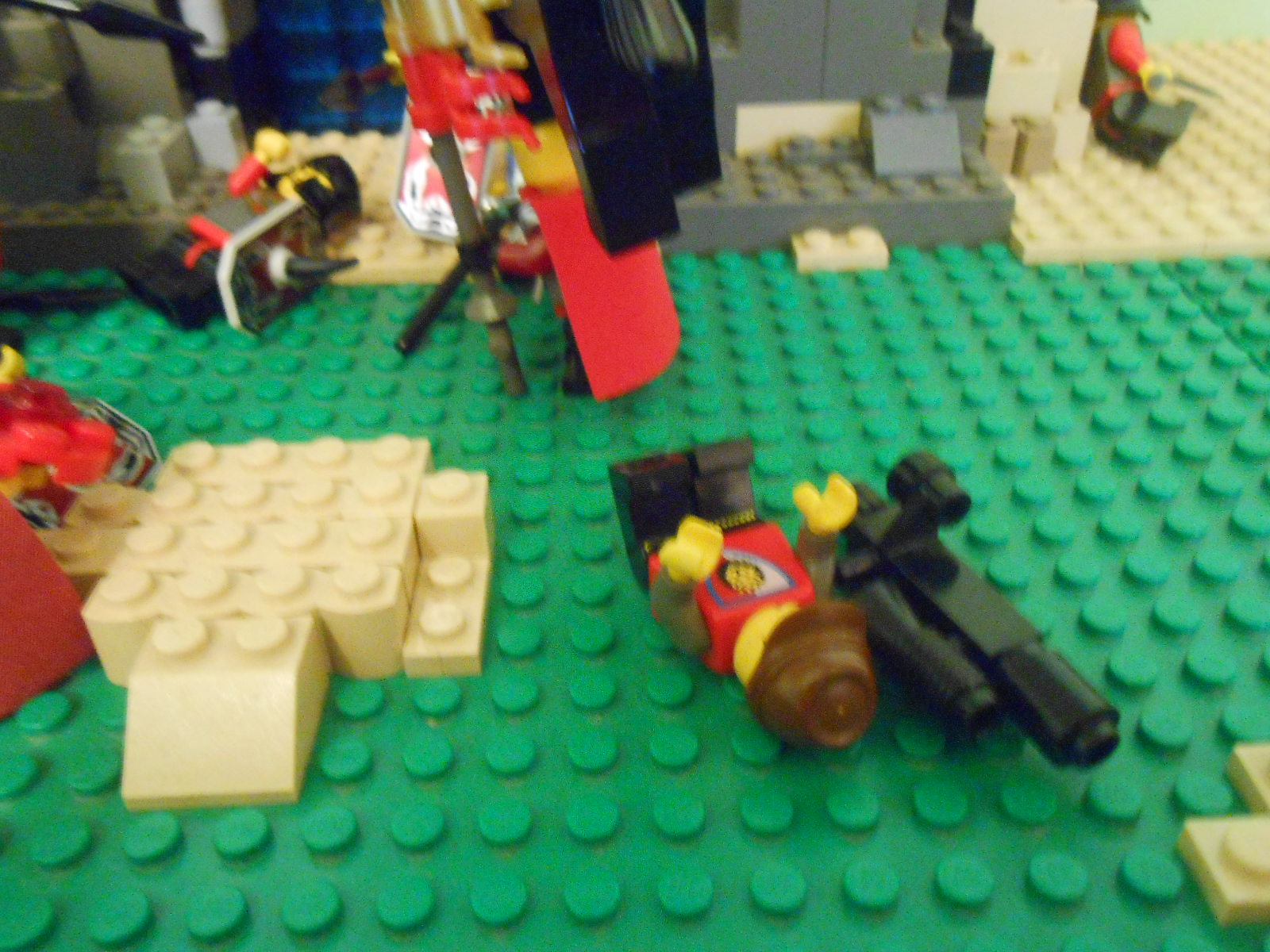 He tries to steady his aim but forgets to steady himself and falls down. No problem, it's only 1d6 crash damage. But he rolls two '1's' on his armour roll and gets incapacitated.

So much for being lucky. 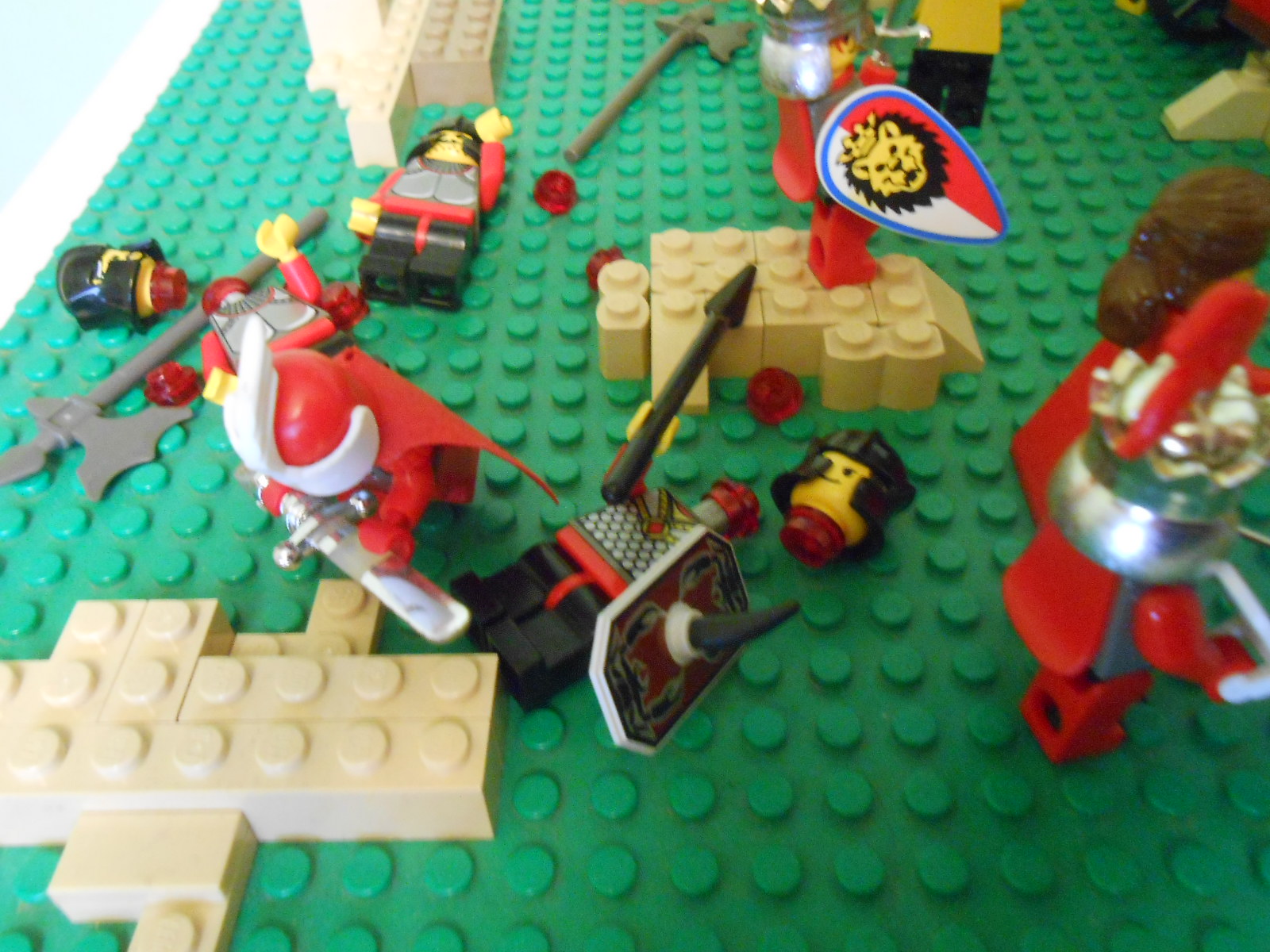 The Captain of the Bloodguard kills two Falx with a wide arcing swing. 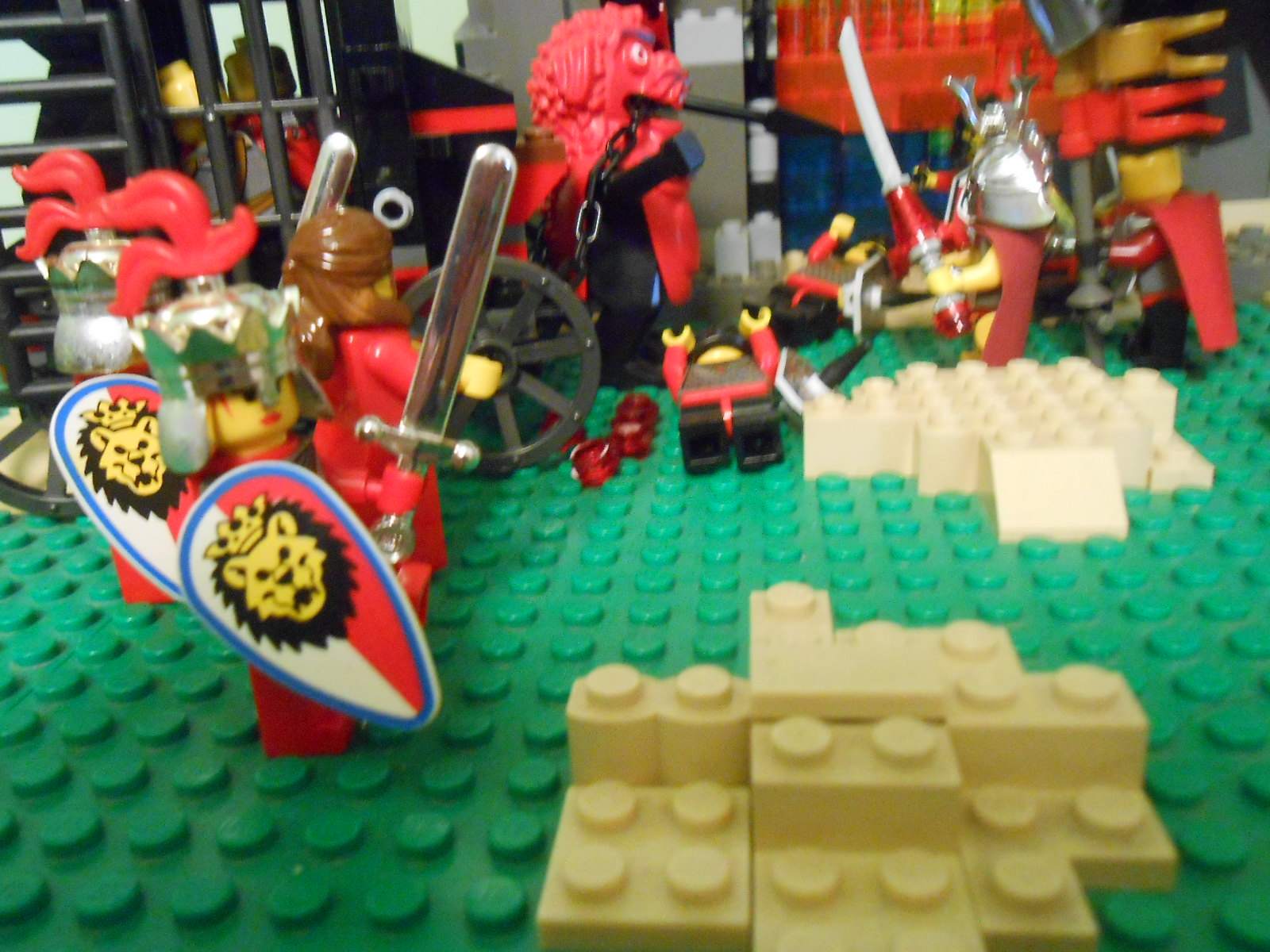 Lara, guarded by the Bloodguard, has almost reached the portal! 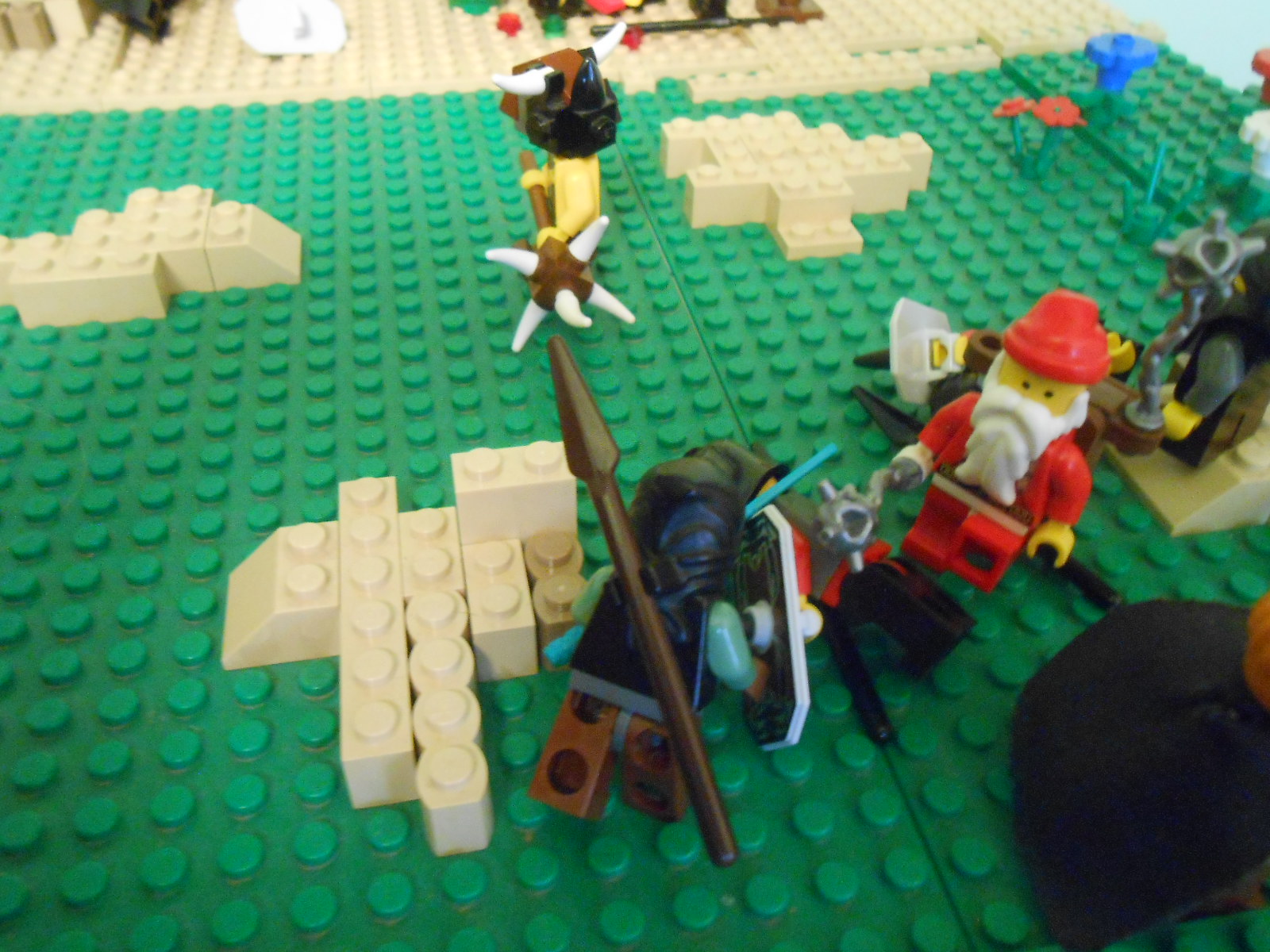 Droe slashes the Falx that MFS beat down. No one said he has to be alive for him to do it. 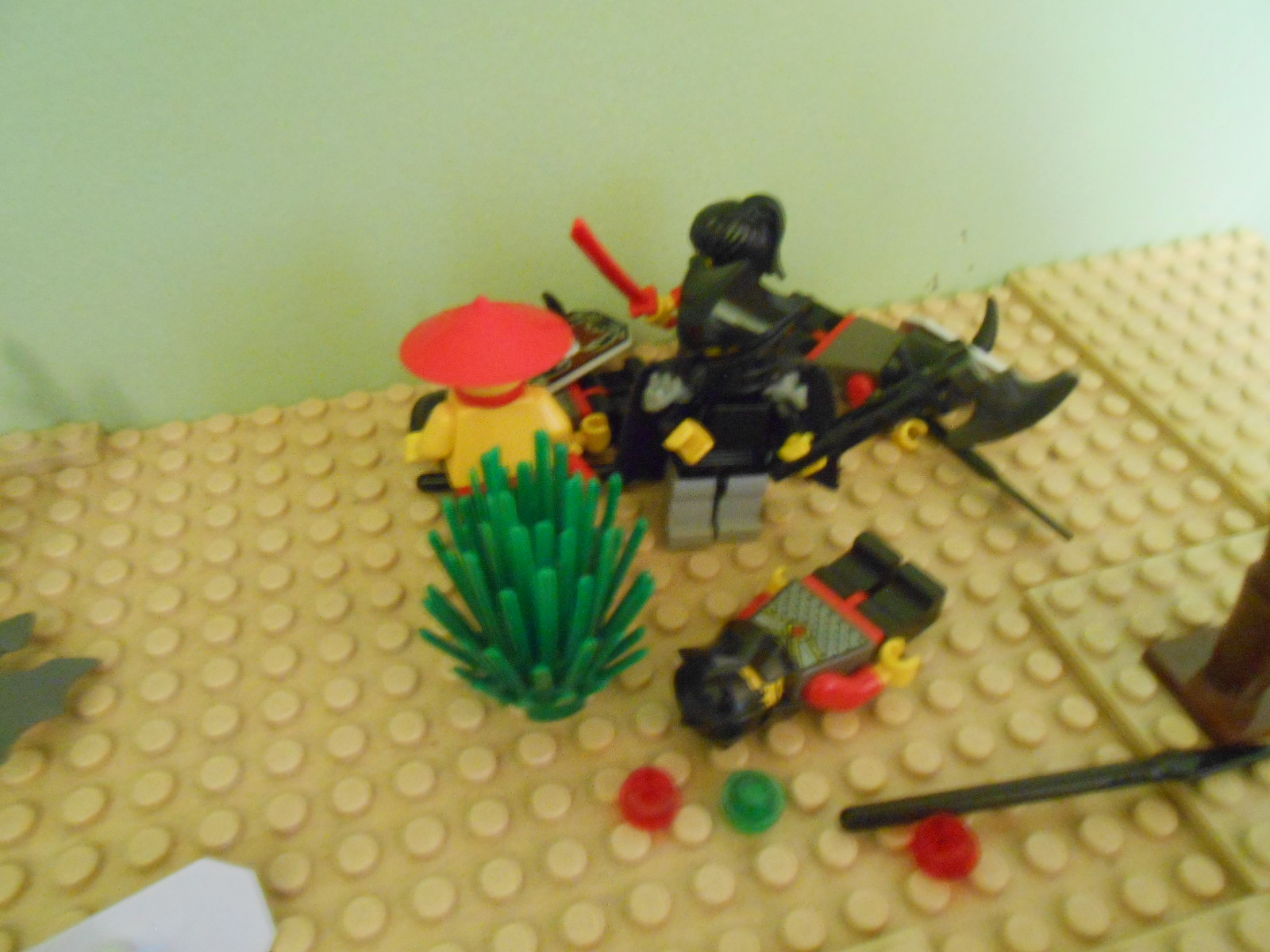 Tachi and Nodachi take down the legionnaire. 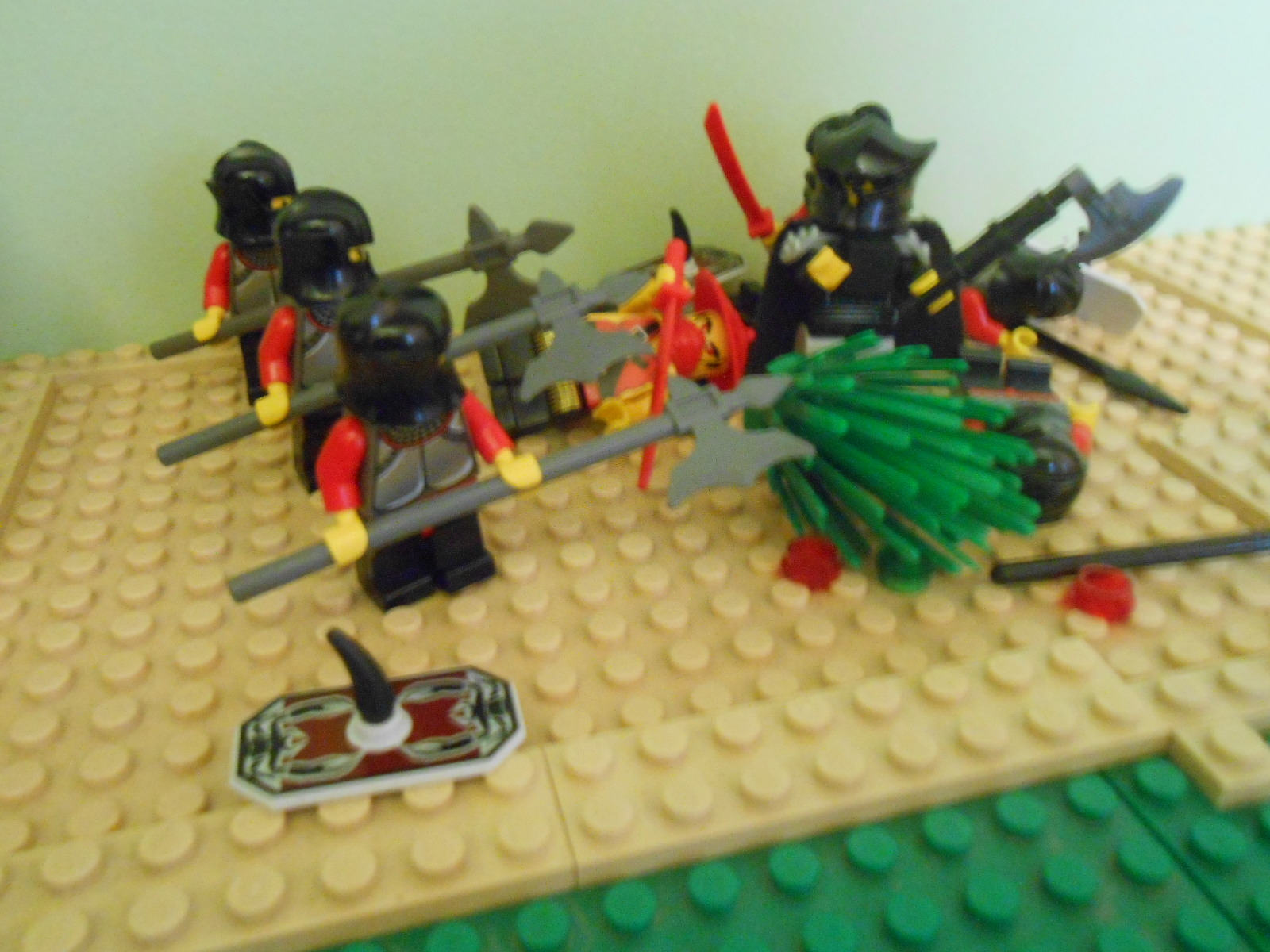 The halberdiers recover from being disrupted and move forward at half speed. Nodachi parries one attack but gets incapacitated by the second. The last halberdier can't get close enough to attack Drakensy and angrily cuts down a plant instead. 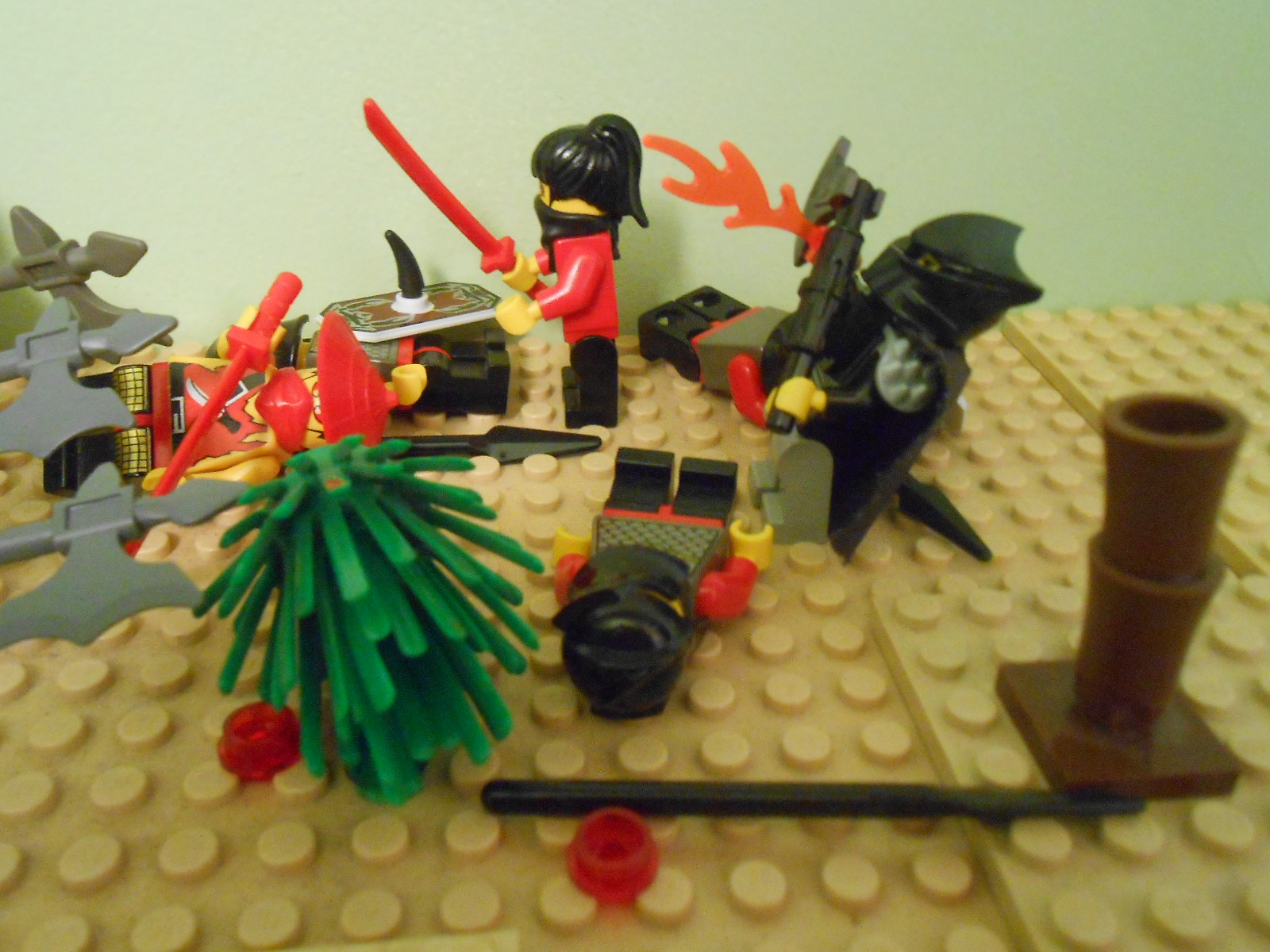 A shot from the battlements nearly hits Drakensy, but he somehow gets the blade of his axe in between himself and his shot. 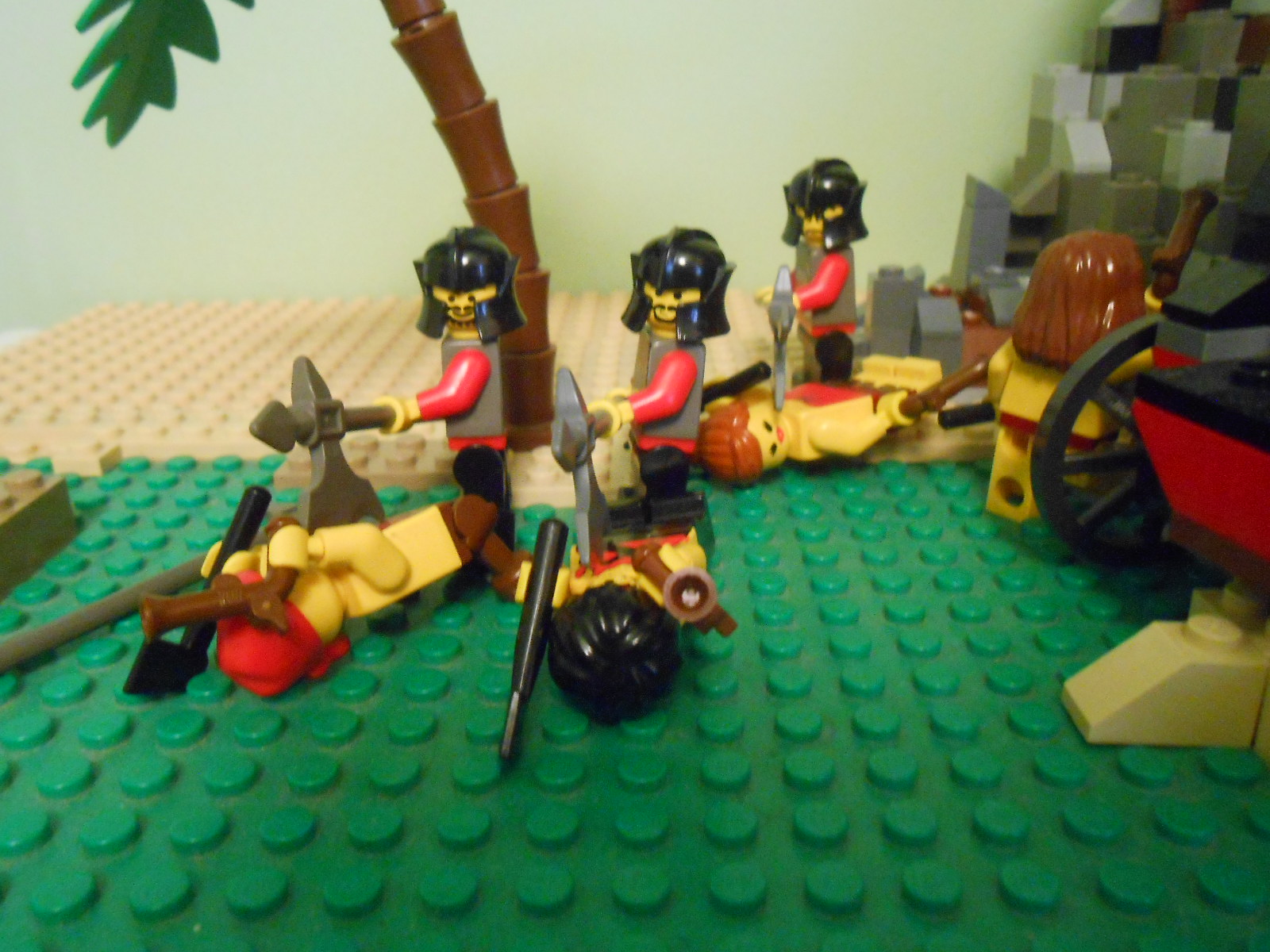 The halberdiers advance and kill three of the traitorous thugs. Not pictured: the troops firing from the battlements shoot at various targets but kill none of them, the last legionnaire attacks Godfrey but misses. 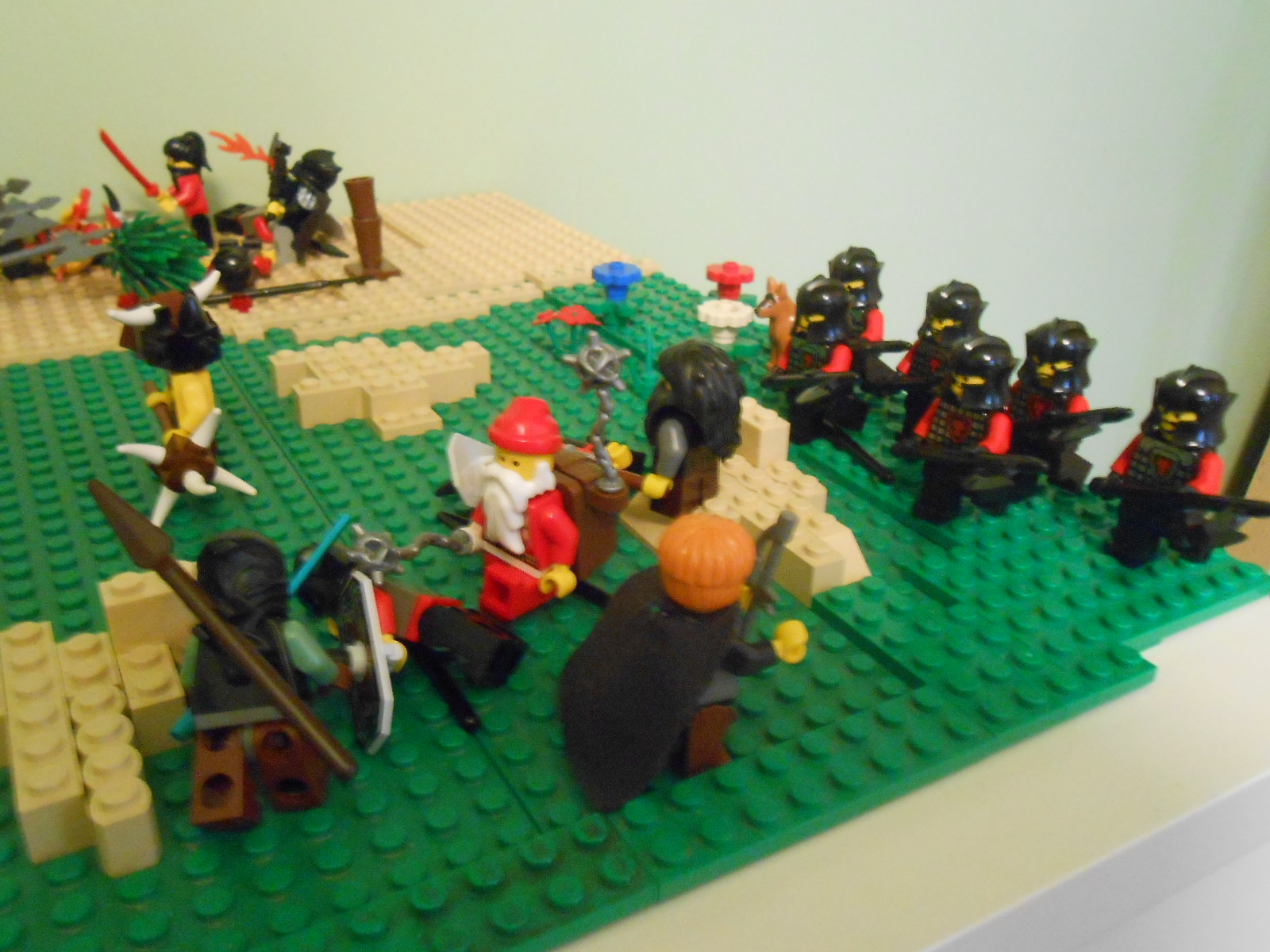 A Falx Deathseeker squad arrives from the East. Be careful, these guys can charge and wield their axes two-handed, so can ignore a level of deflection. In other words, they can do terrible, terrible damage! 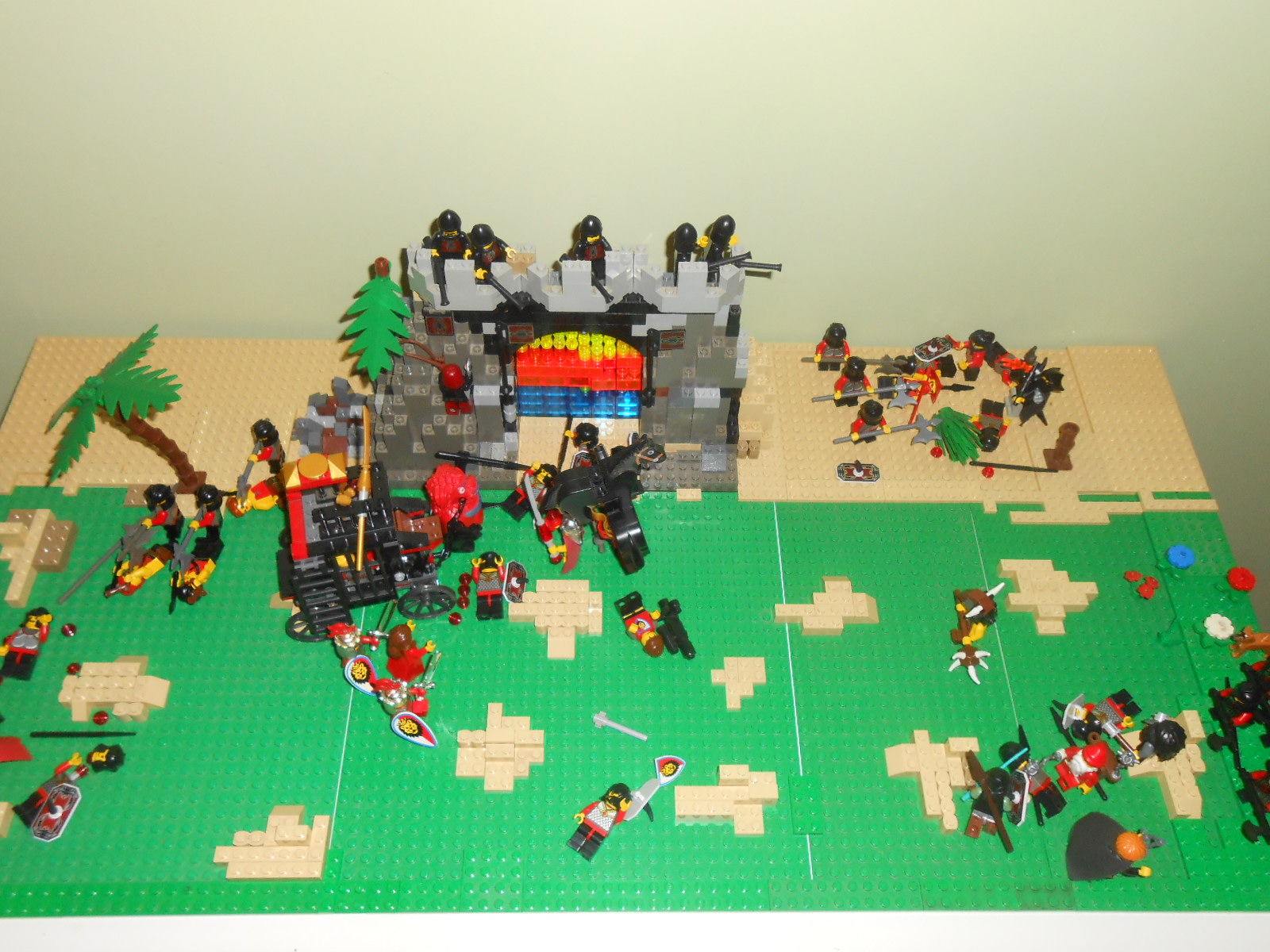 Punik looks at the incoming elites and a plan forms in his mind. It isn't a terribly original plan, but it is a plan. He walks over to Nazlam, looks up at him, gestures towards the elites, and says "throw me at them." If Nazlam agrees, he is going to try to spin as he is tossed to act like a spinning flail-ish thing...

Rolys, however, believes discretion is the better part of valor. He's an archer, not a front-line warrior. He sprints away from the elites to the second little rock (?) pile along the front of the board, then turns and fires at the elites.

Drakensy is in a bind. Three halberdiers, one of his allies knocked down, and now people on the hill are shooting at them? Well, time to even the odds! He grabs a spear from one of the fallen enemy and hurls it at a halberdier! If he has enough time, he'll do it again - there's more than one spear near his feet, after all!
Top

Re: Crusade's End - Send orders for Round 3!

The Marshal of the Bloodguard will charge the Falx guarding the portal, to kill and/or knock him away, while Queen Lara and her guards advance close to the portal
That's Supersonic Spaghetti Warrior to you, sir.

The real Piltogg was the friends we made along the way.
Top
Post Reply
19 posts