+++TUNE IN TOMORROW FOR THE CONCLUSION OF THIS CLIFF-HANGER+++

Damnit Warhead. I need to find out if any of my Bitches died!!!

warman45 wrote:OMG! 18th century artillery! FIRE THE GRAPE SHOT (grape shot is essentially a giant shotgun-like spray that kills everything in a cone)

Bah!
Grape shot is for 18th century cavemen.
19th century gentlemenne of leisure use canister shot (like grape shot but with more pellets)

I think the worst must have been that sticky burning substance they used to fire at each other with howitzers, can't remember the name tho.

Massam wrote:How many rockets do I have left?

Rocket Girl has only one Rocket left on her backpack. I'm surprised nobody but Lrdofbriks has checked out any of the equipment lying about. Some are better than others but I'm sure there are extra rockets amongst it all.

@Adrian: Mwah-hahahahahaha! Tomorrow I'll put you out of my misery... Hey, that's what I tell Mini-Warhead each night before bed too, as it happens.

Yeah, I find it amazing when a host packs in all these brilliant features for example a viscous pizza cutter dangling over a "Hostage Chef", yet no one cuts the wire.
My terrible youtube channel
My terrible soundcloud
My terrible steam profile

not true. grape shot was balls about the size of a grab that were useful for demolition and antipersonel. canistar shot was a cylinder made of a thin sheet of metal that was filled with rifle sized bullets and pieces of shrapnel. it sucked at demolition but could devastate personnel. i tend to think of it as the first fragmentation rocket.

Right, enough of the 18th Century guide to shrapnel pish... 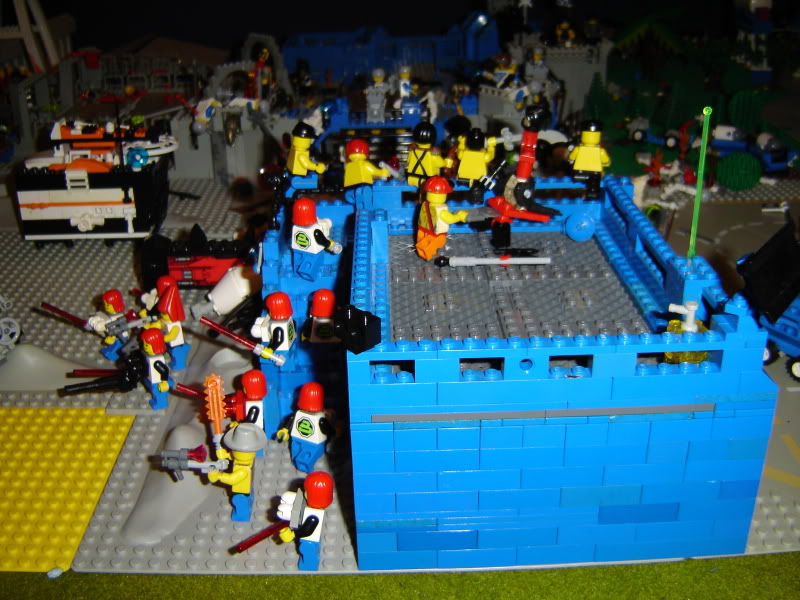 The Bitches fall back to the blue buildings roof. The unarmed Necromancer doesn't stand a chance and is easily taken care of by the two Man Bitches. 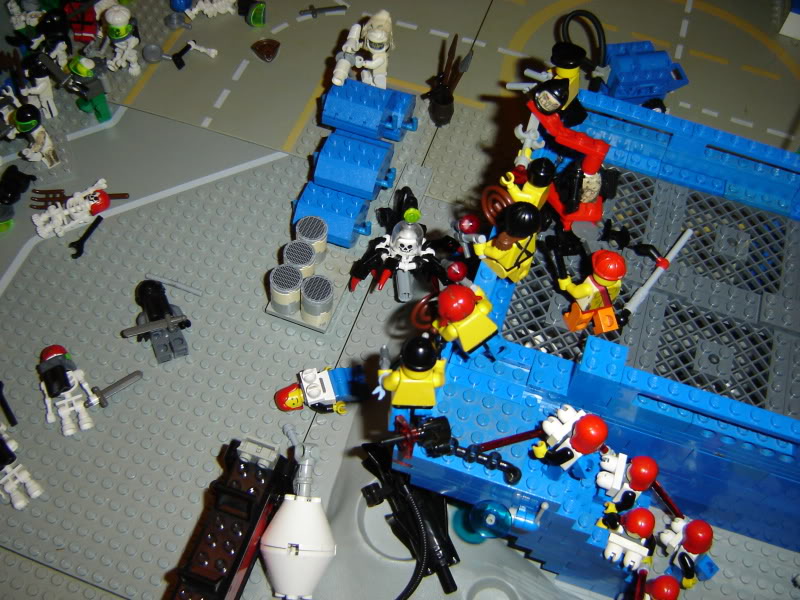 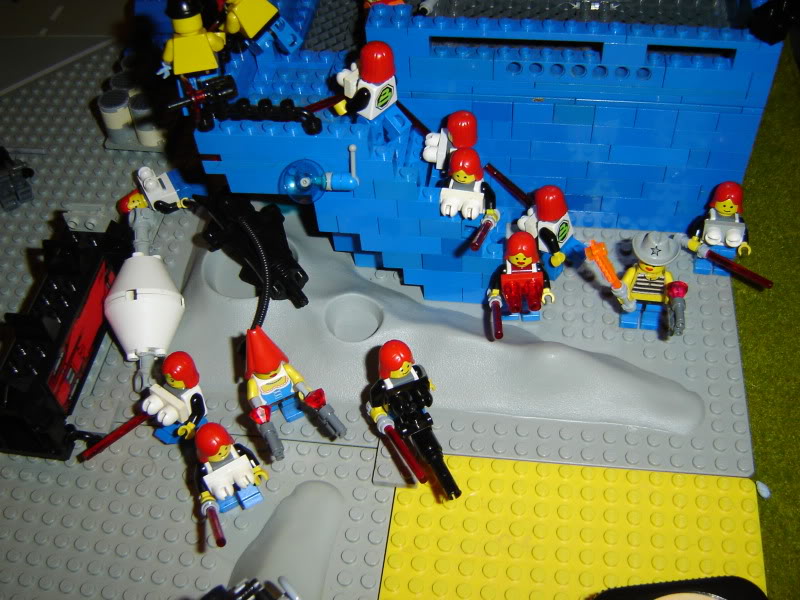 Those that can, take up position overlooking the Creeper. The others face the newly arrived Red Baron De'ath's Horde. 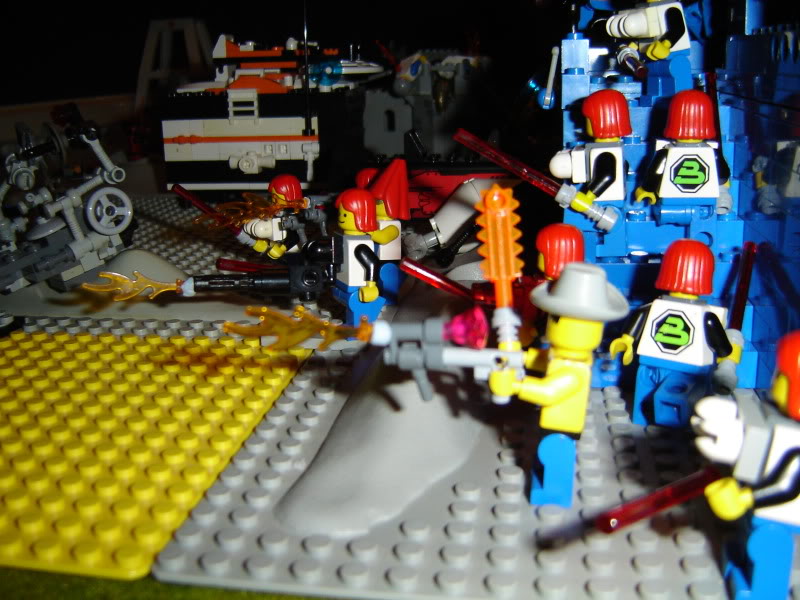 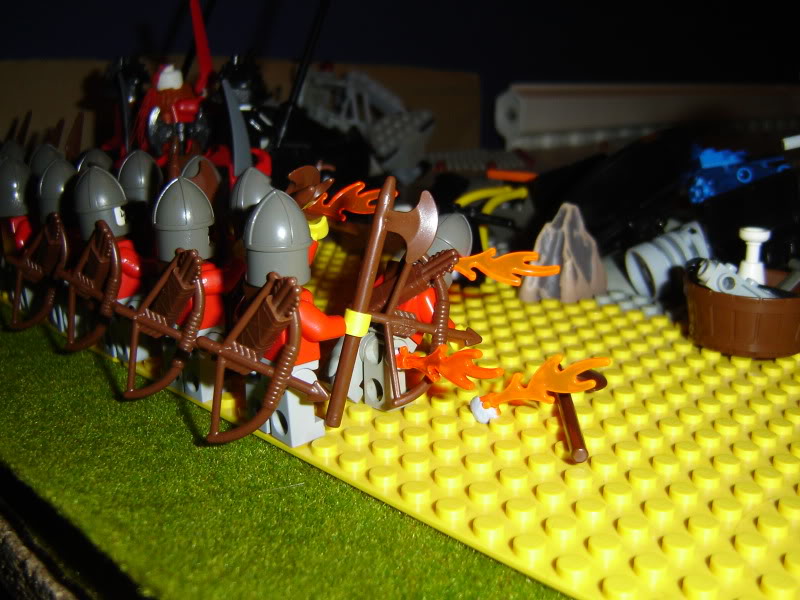 Only two of the Undead Knights fall. Prudently the other Bitches hold their fire for the inevitable charge. 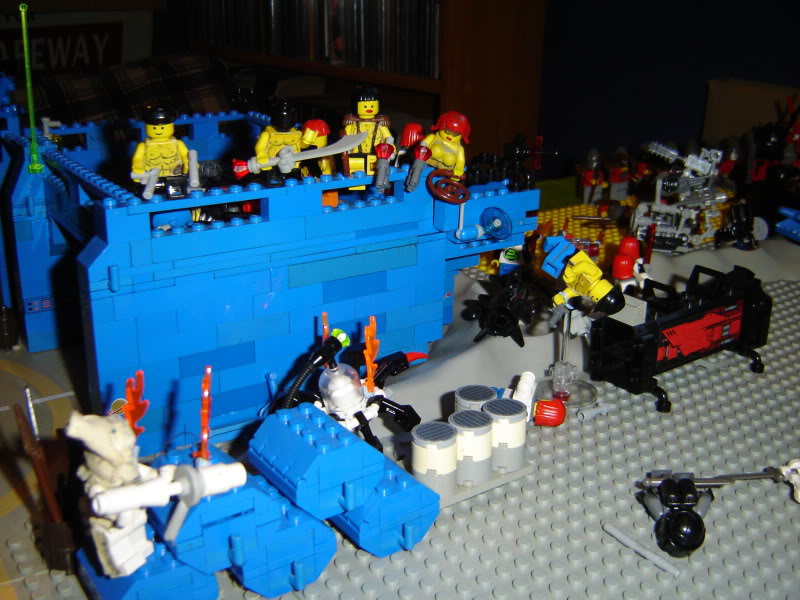 One of the Man Bitches rolls a fumble and falls off the wall, ouch... he's alive but stunned so can't move next turn. The others fair just as badly. Out of the three hits not one of them exceeds the Creepers or even the undeads armour. 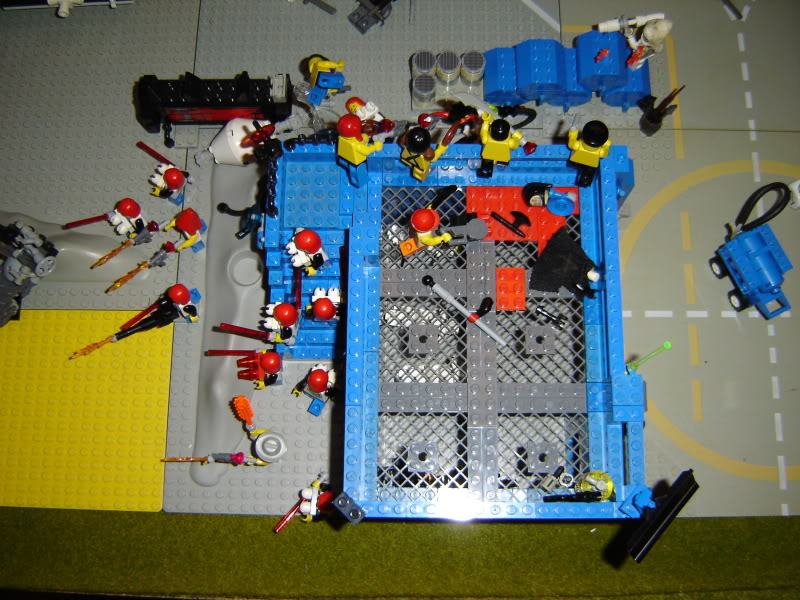 The Bitches are left holed up in a defensive position, unable or unwilling to move.
Last edited by Warhead on Thu Dec 24, 2009 1:24 pm, edited 1 time in total. 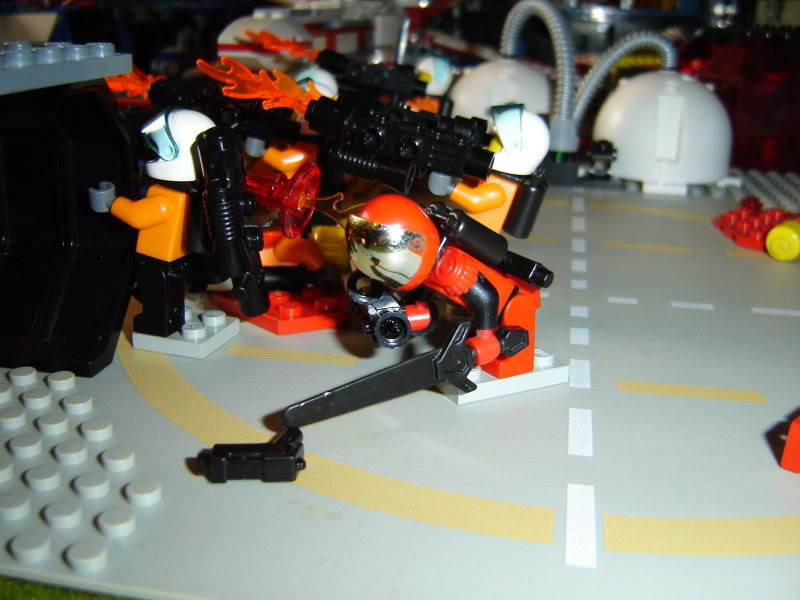 The Captain discards his Auto-Pistol and grabs the fallen troopers heavy laser. 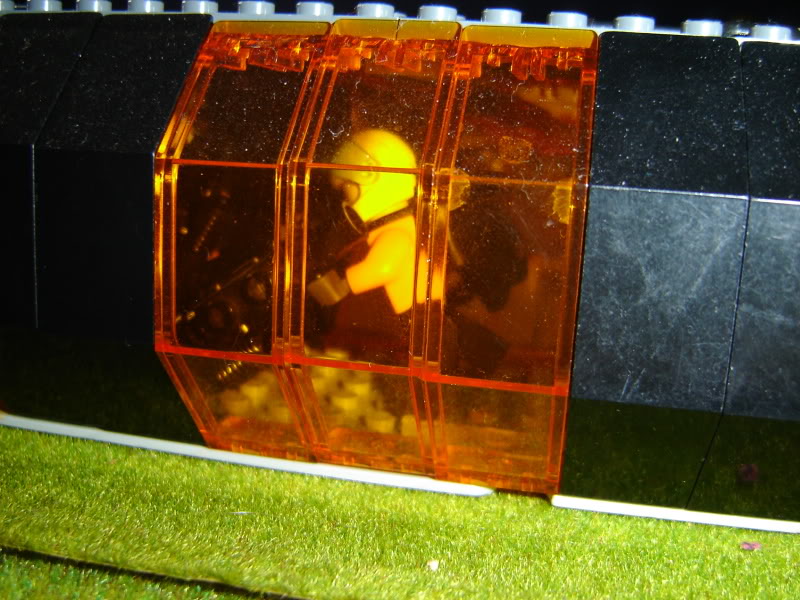 The Trooper carrying the Computer Core makes it to the safety of the hanger. 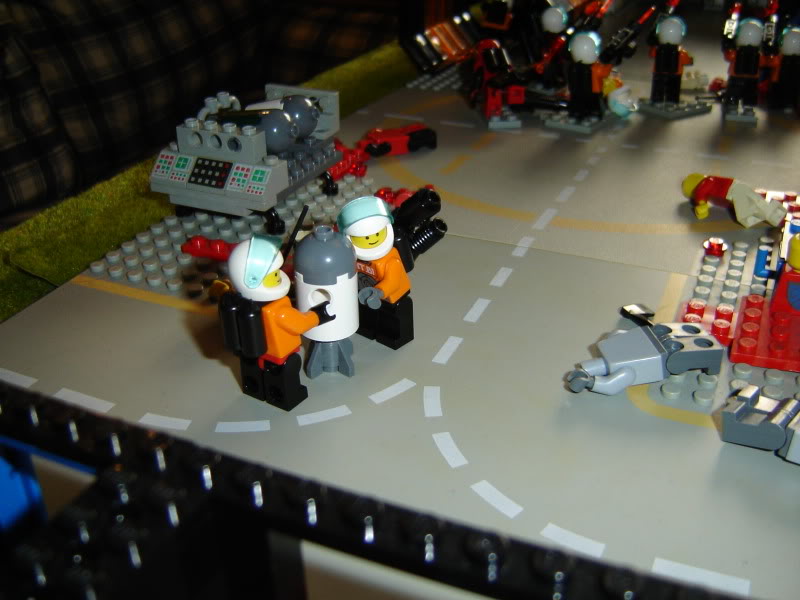 A Trooper and the Squadron Leader manage to man-handle a Bomb. They take care to place it just so... 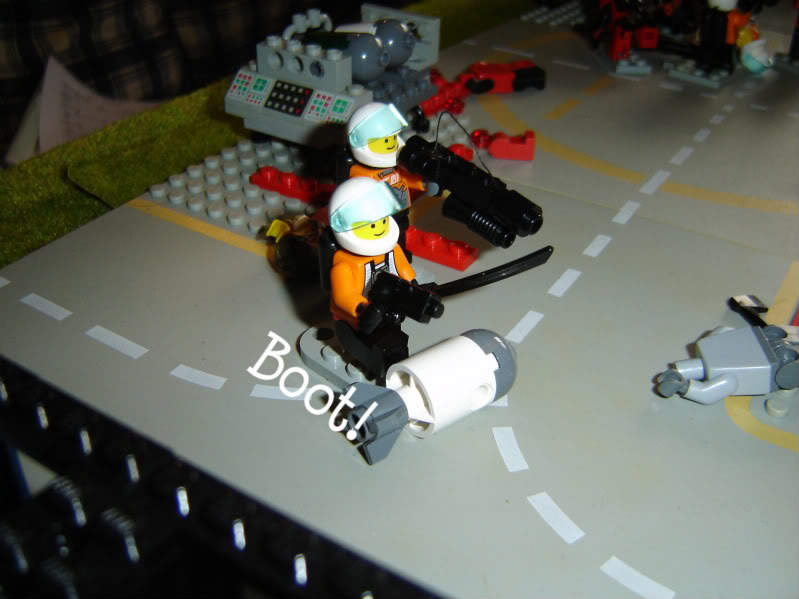 ...before giving it a send off in the right direction. 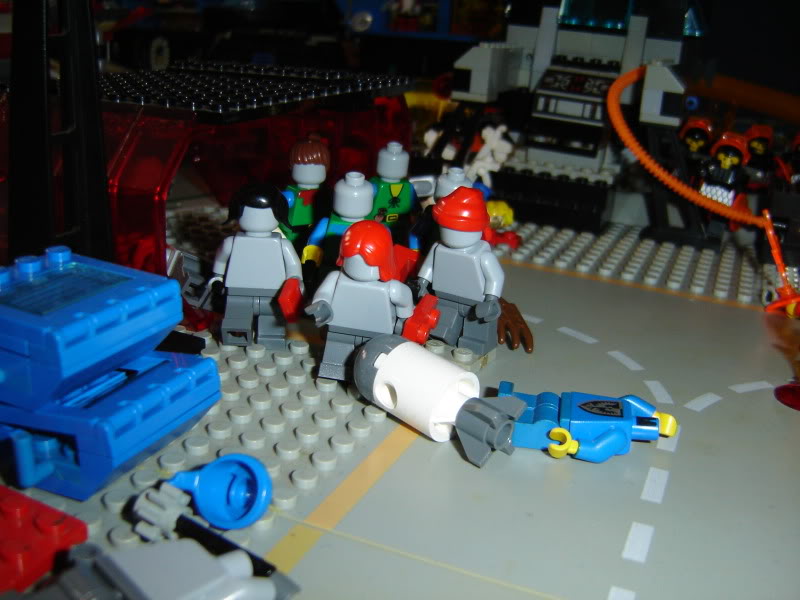 Right on the Money. 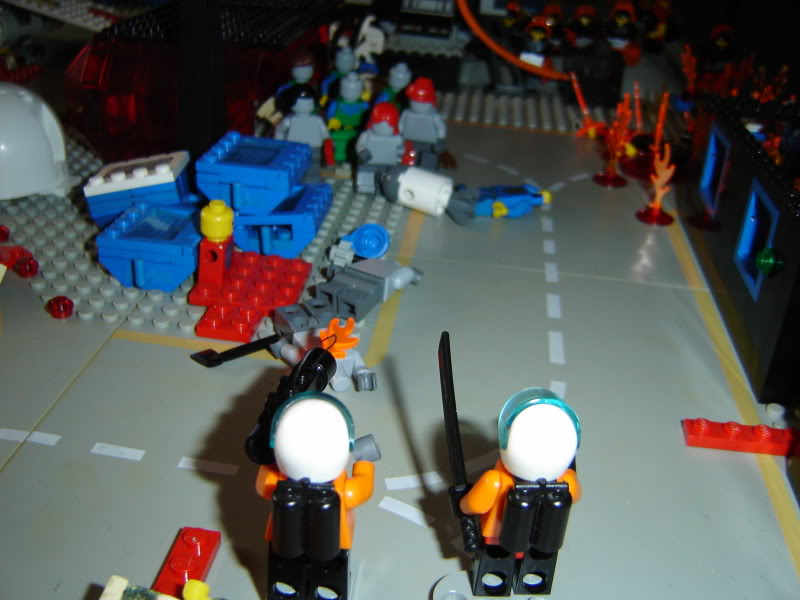 The Trooper takes the shot, and it's good! 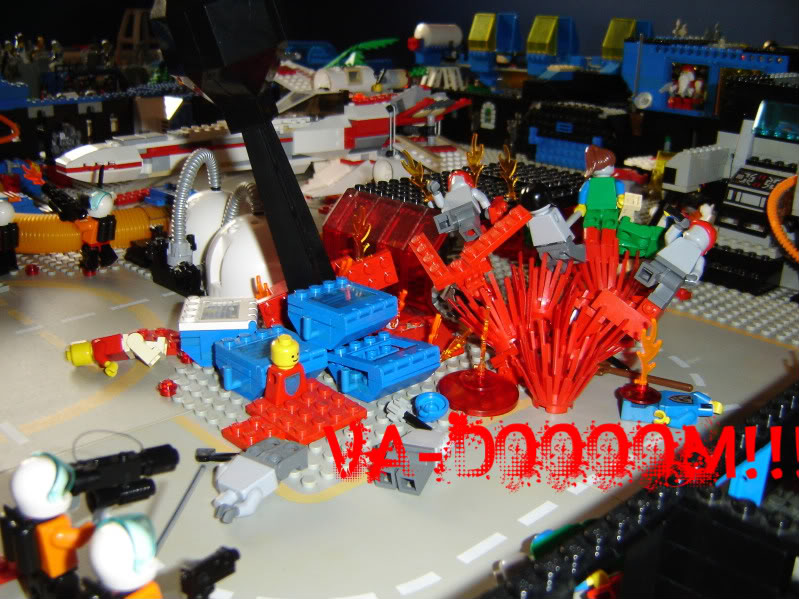 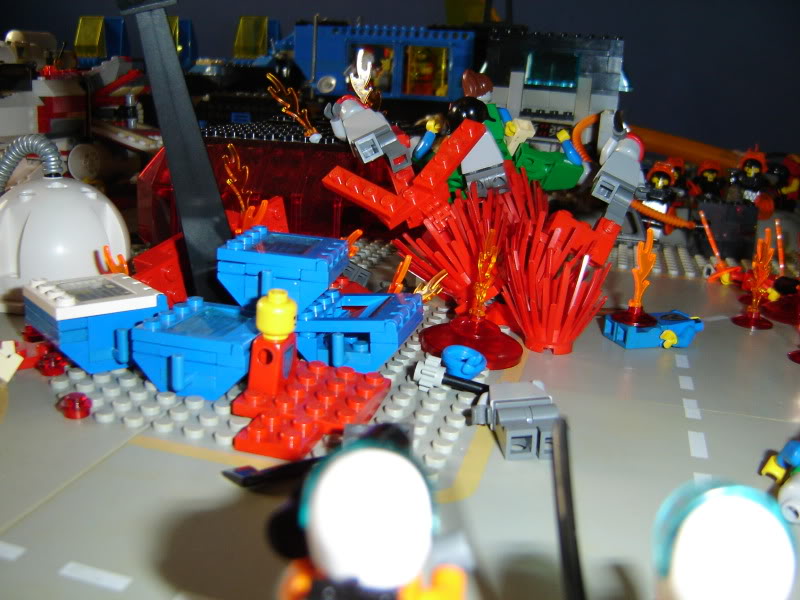 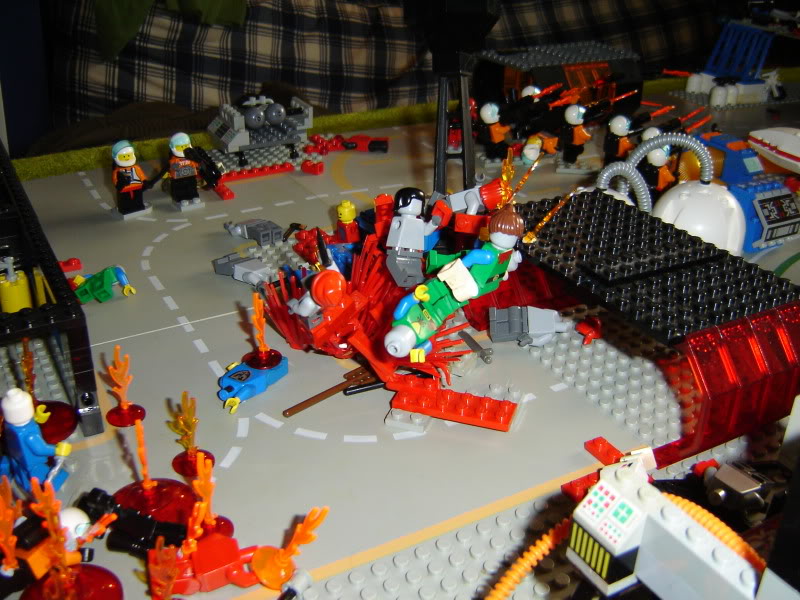 It took me ages to get them like this, so you're getting three pictures of the same thing, just shut up and lump it, I don't care. 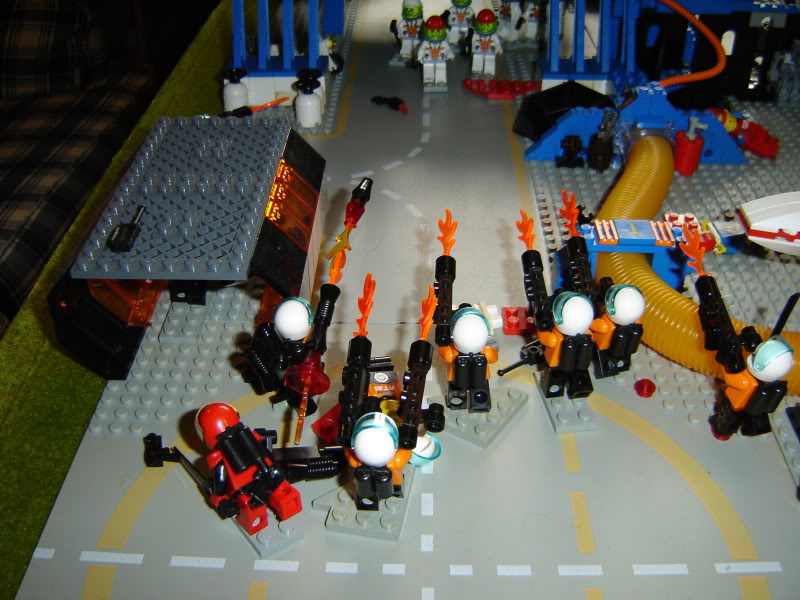 Impressive Firepower! Six Heavy Rifle attacks blaze a massed volley at the Creeper. Laser shots sizzle and burn against the Creepers armour but nothing seems to penetrate.

The Trooper with the Immortal-Tech Portable Rocket Launcher however managed to point it in the right way, he nearly burns the Captain with the backblast. Once it's fired it's discarded and can't be reloaded. 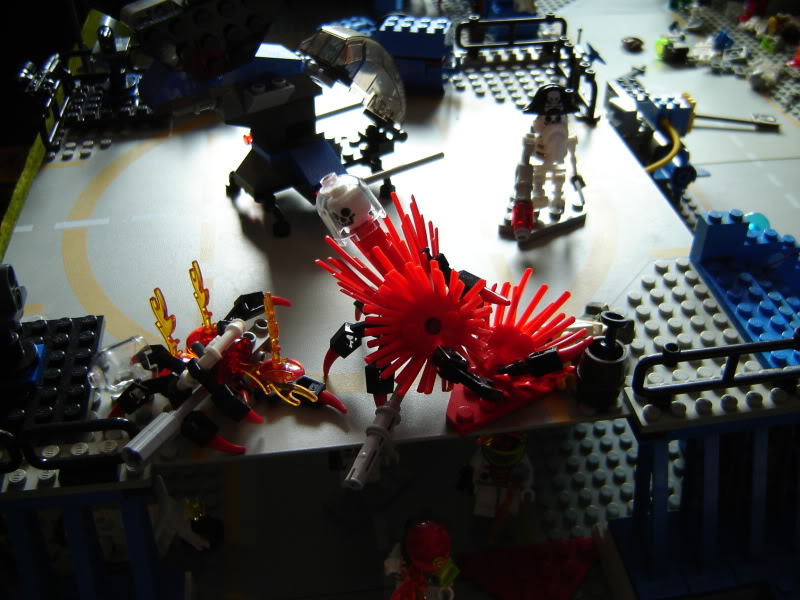 But it's the shot that counts, scratch one more Creeper! 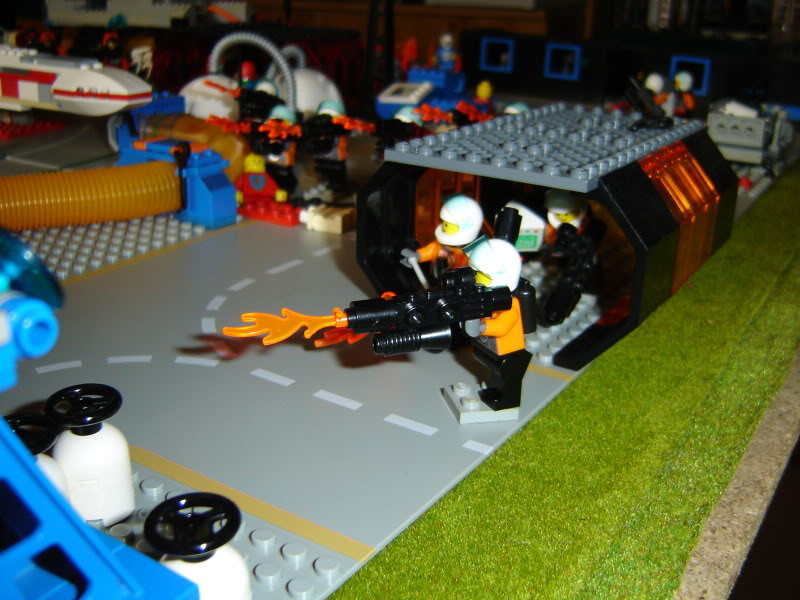 The Trooper with the Heavy Bolter and his squad mate take up flank position and lay down suppressive fire on the undead to try and keep them back. 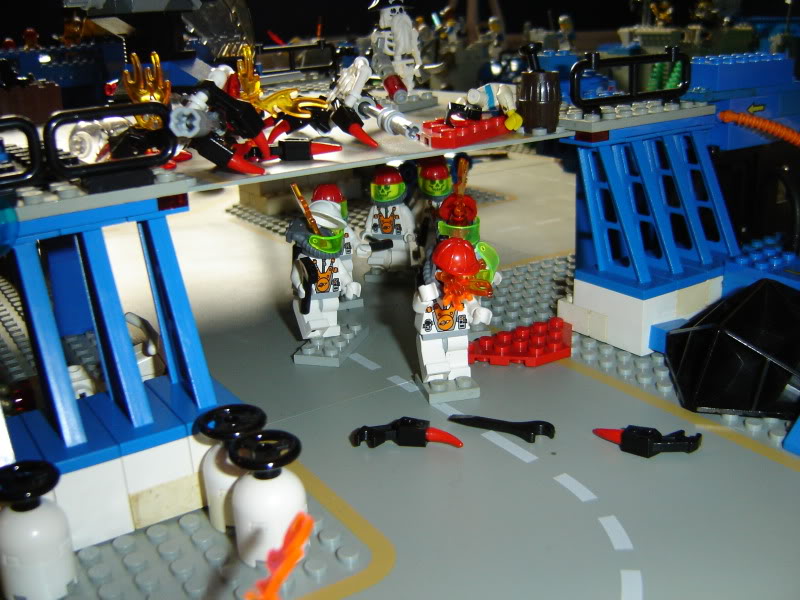 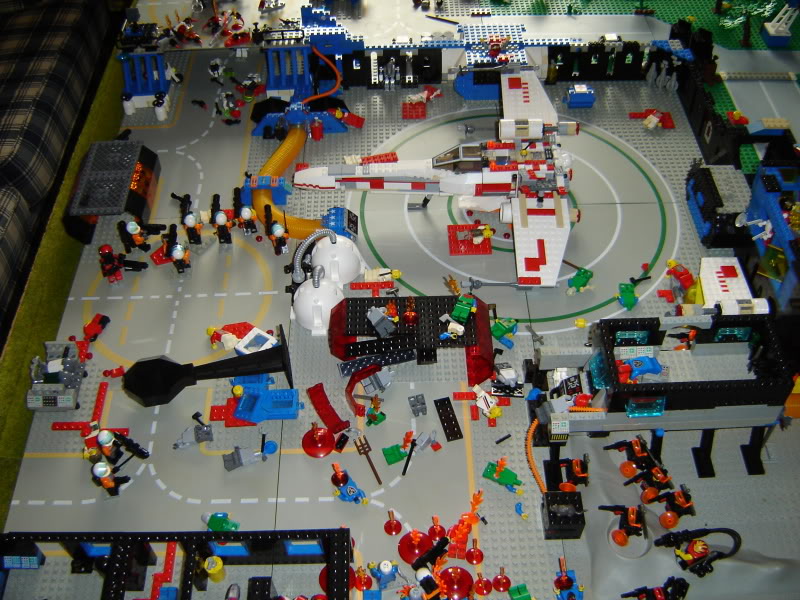 @Natalya: There, I hope that helps you work out where the fuck they are.

I'll probably be too busy to post stuff now but I may get a chance when the wife's watching one of her drama's (puke) on Manly Santa Day night, you never know. In any case, I hope you have enjoyed it so far and have a Great Manly Santa Day guys and I'll get the rest posted in the next few days.

That bomb attack was awesome. I was afraid my soldiers might have rolled a 1 or something and screwed it up, but it was executed perfectly. The ASE will prevail today!!

*EDIT*
Something more... Stop shooting at Zombie Michael Jackson. You can't kill him -- he made Thriller!!
▲
▲ ▲

I was very pleased with the bomb orders too, and that they worked. Your NCO had to make a fairly high skill roll for that to come off, the Trooper too. I think some sort of Battlefield Honour would be in order, IF they survive.

FOR THOSE THAT HAVE POSTED TURN 5 ORDERS!

TURN 4 IS STILL ON GOING! THE PEACH PIRATES AND SECRET FACTION MAGIC SOAP AND THEN THE UNDEAD (WHO ARE ALWAYS LAST IN INITIATIVE IN EVERY TURN AND ALWAYS WILL BE) AND THEN AN END TURN WHERE REINFORCEMENTS AND NEW TEAMS ENTER PLAY IS STILL TO BE DONE.

Fine.....my orders are pretty general though......but I'll change em if I have to.
everyone < massam
Top

Eh what? What happened to the Manly Men? They deserve to go before the f'ing peachies! Especially considering their orders...

one thing stood out from that last message:
REINFORCEMENTS.

lrdofbricks wrote:one thing stood out from that last message:
REINFORCEMENTS.

He probably meant zombies. They keep popping up.