AT LONG LAST THE MANLY MEN!!! 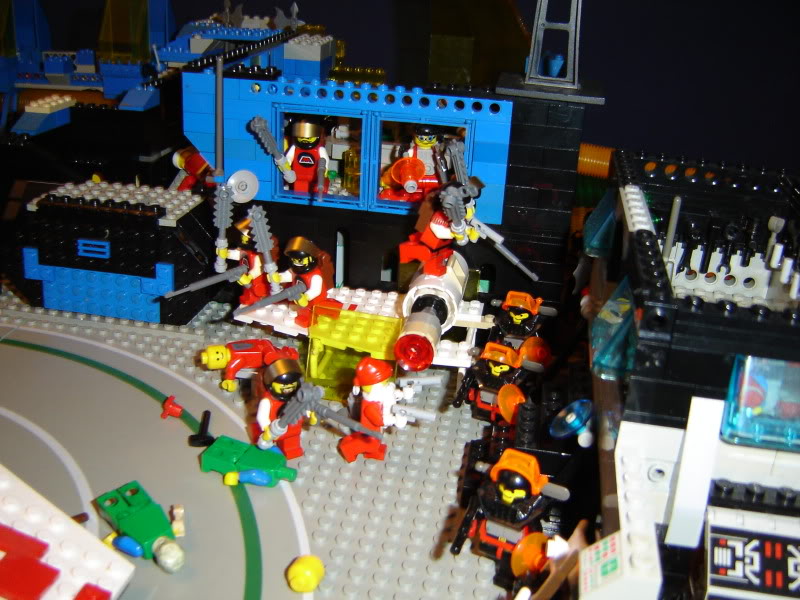 Manly Santa and the Manly Men each take a Swig of what they think is another barrel of Warhead Beer, only to find it's a barrel of Confiscated Cheap'N'FuKin'Nasty" Maniac beer. Wah-hoooo! Instantly pissed on pure rage they attack the VOL. 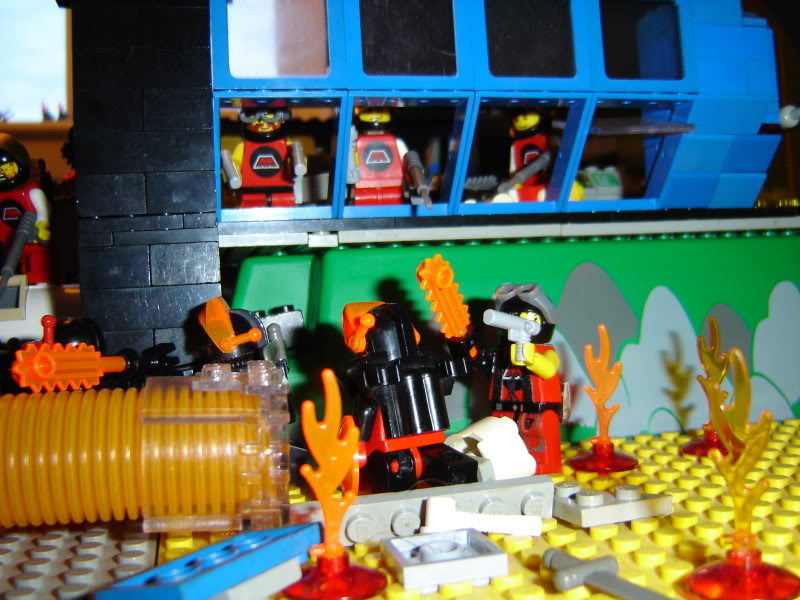 Those unable to leap out the windows open fire. 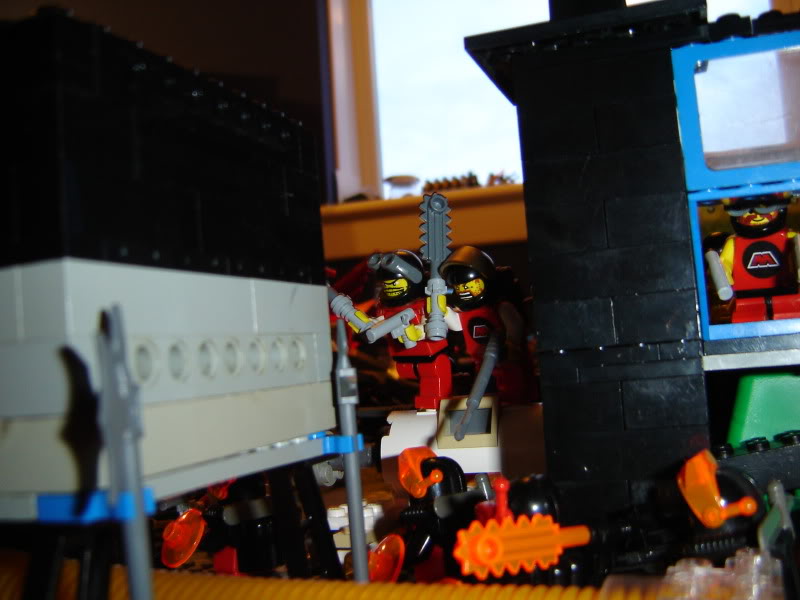 The Mighty Ombri and a Manly Man ambush the advancing VOL from above. 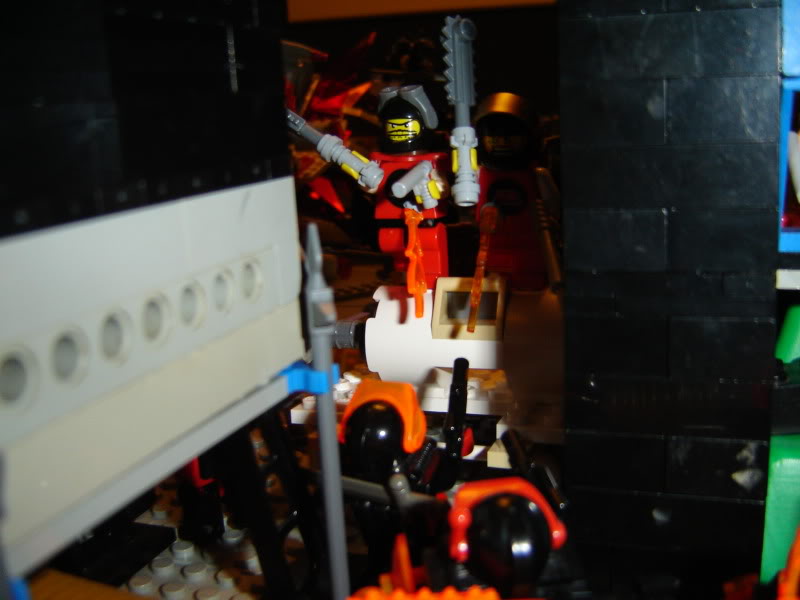 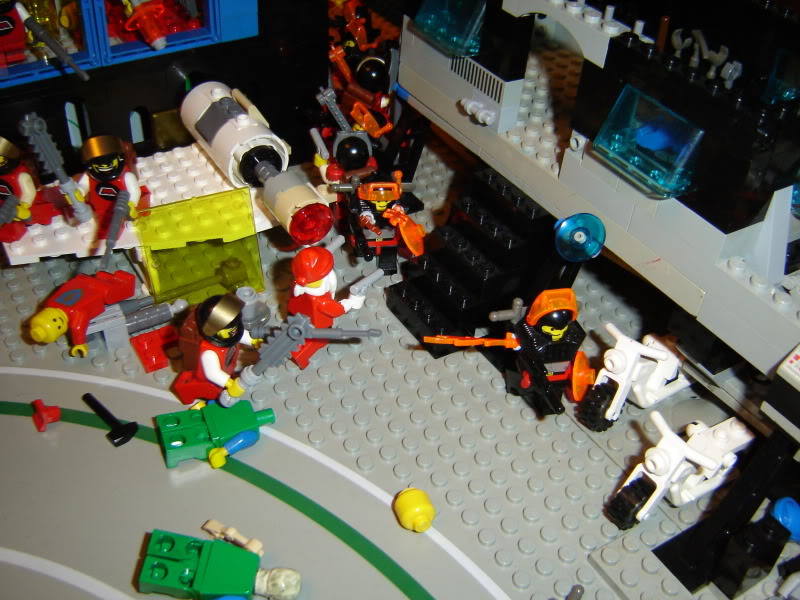 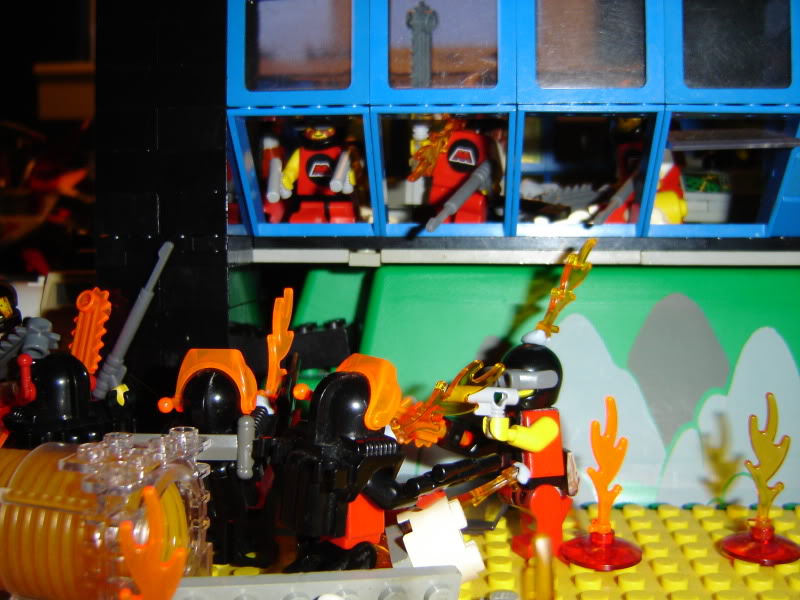 Shots blast into the VOL, but their serious armour proves superior and no damage is taken, even when a Manly Man critical fumbles a shot that strikes the Tough Ombrie in the head. VOL reaction fire kills one of the Manly Men. 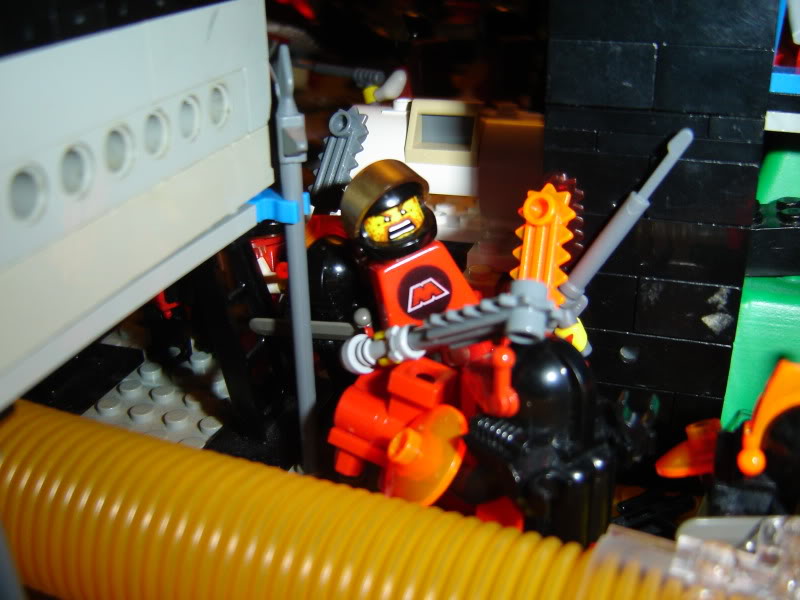 The First to die is a Manly Man who fearlessly/foolishly takes on Commander Leonidus who managed to save himself from harm with the help of his shield and armour while practically exploding the Manly Man in a shower of gore and slashing OTC. 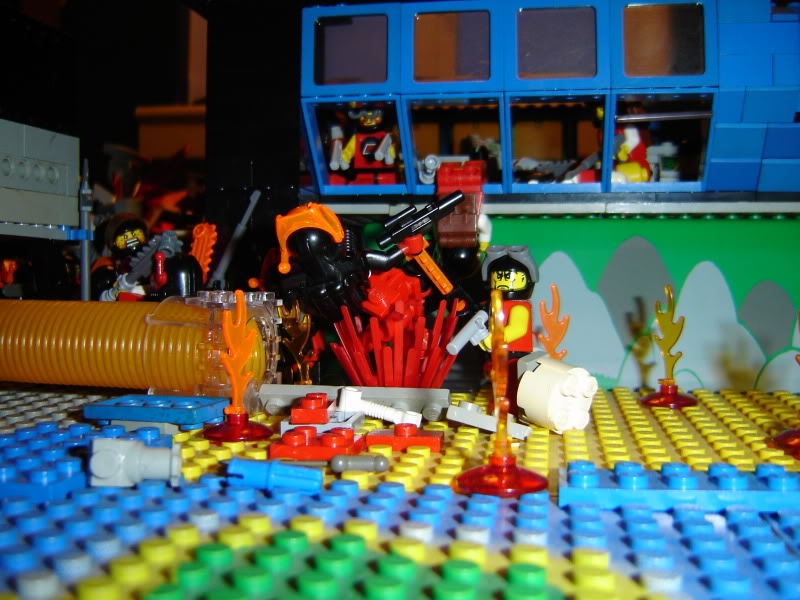 The VOL trooper is torn apart in a spray of arterial blood as the Tough Ombrie shows that VOL armour is no match for an OTC at your side.

THE ARMY OF DARKNESS 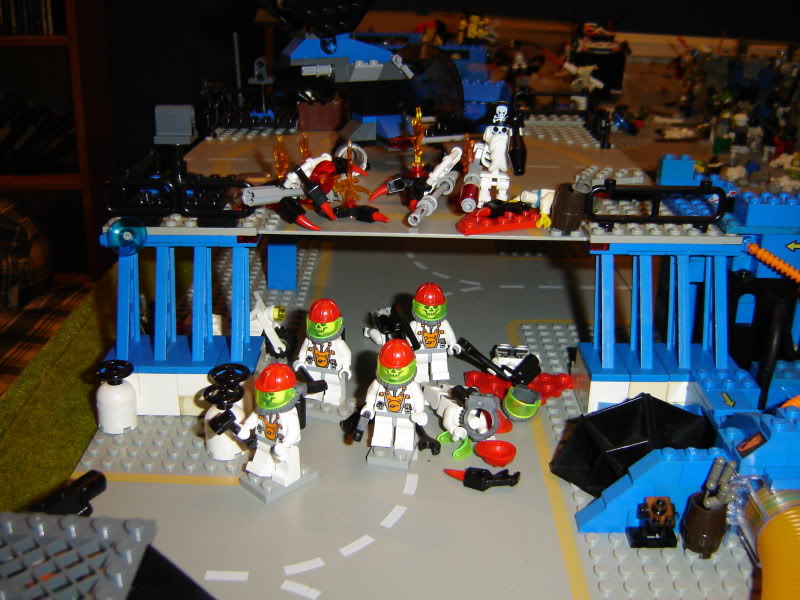 The few animated undead in front of the Assyrians try to close the distance, but fail. Their Captain finds a rocket, a lucky find. He then opens fire with his Cyborg Arm but misses the Assyrians. 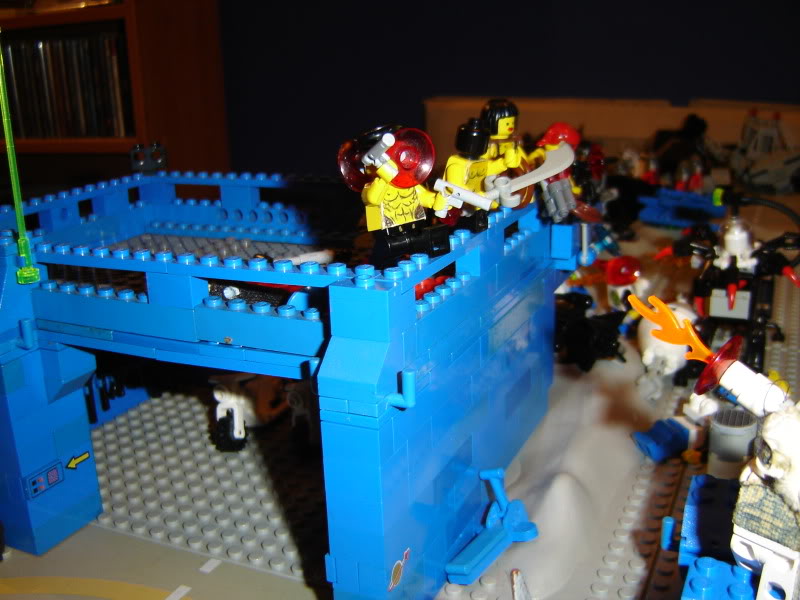 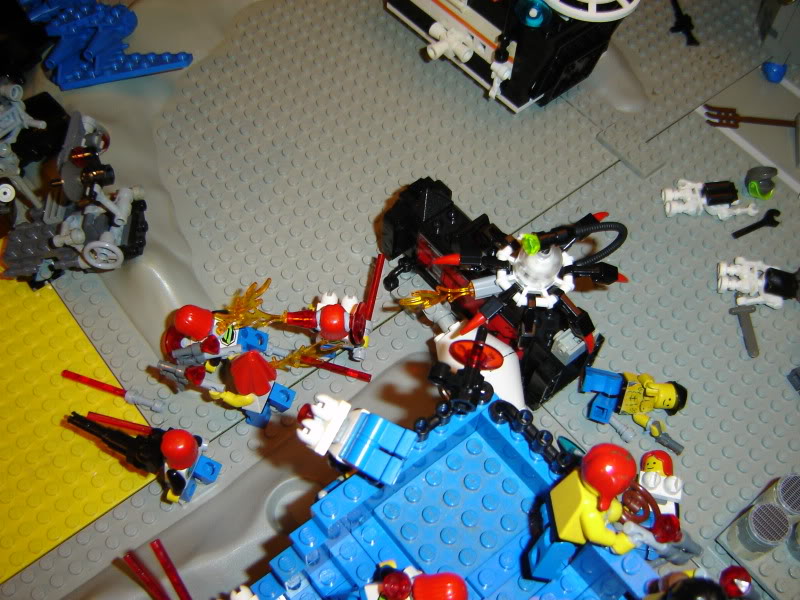 The last Creeper opens fire on the Lil-Bitches and their Mistress. Two Lil-Bitches die but the Mistress proves too tough. 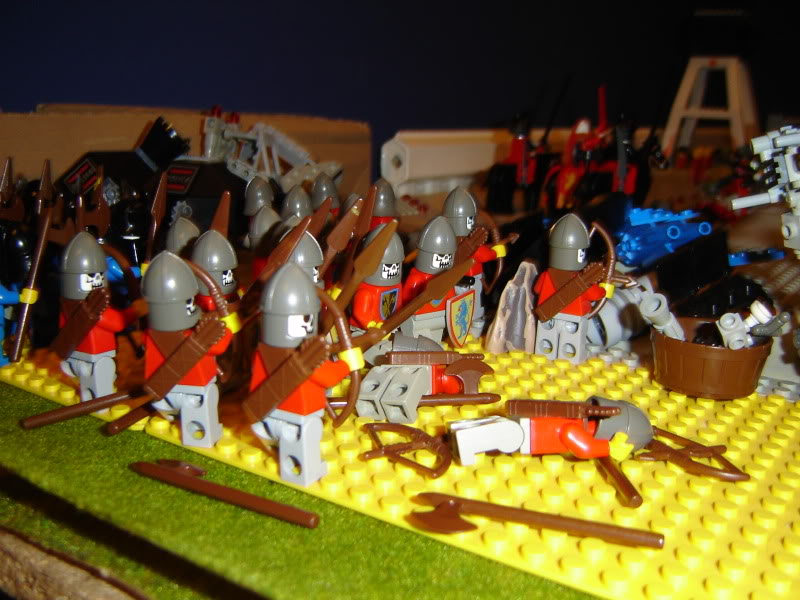 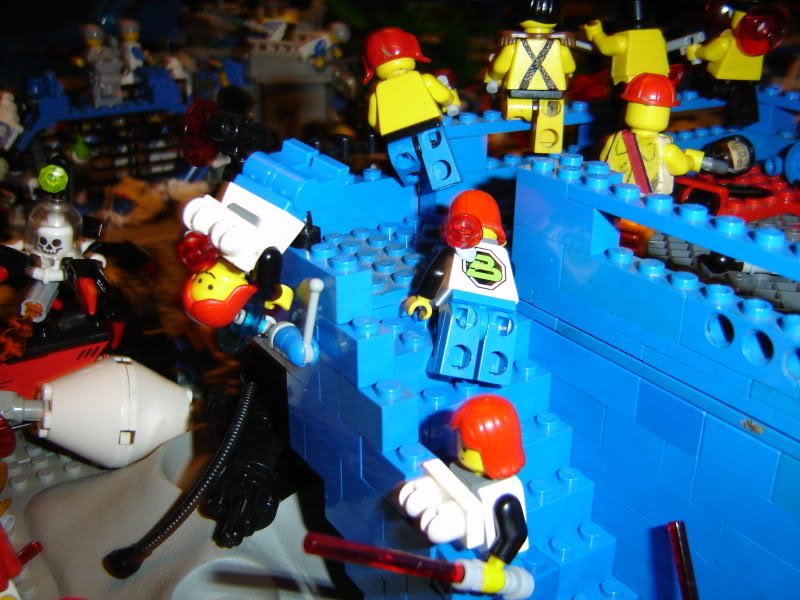 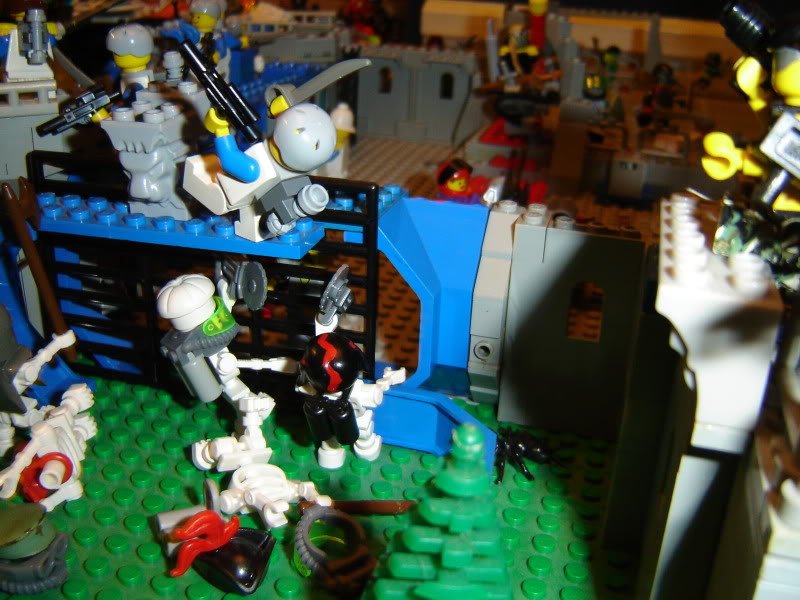 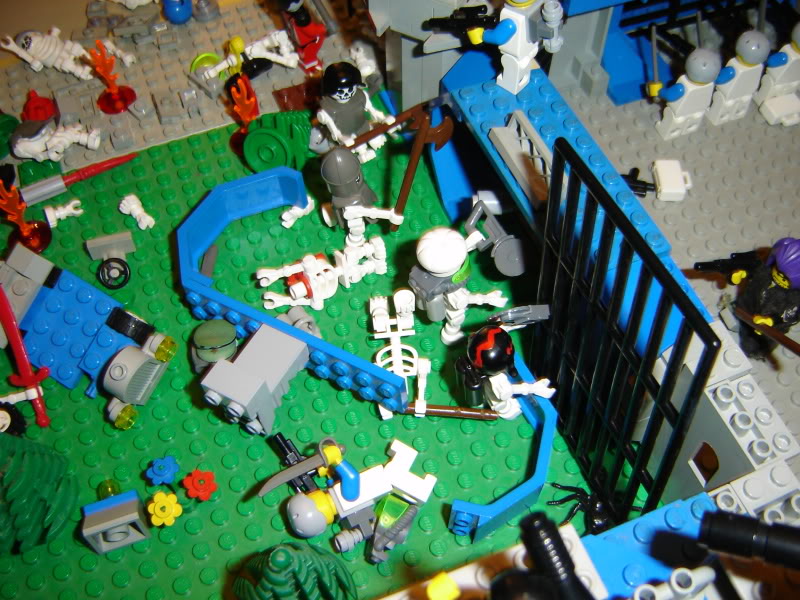 One of the gates begins to topple as the undead manage to use still saws to take it out. The Gate is now open. The Britannian Assault Trooper fell but is unharmed and can act next turn normally. 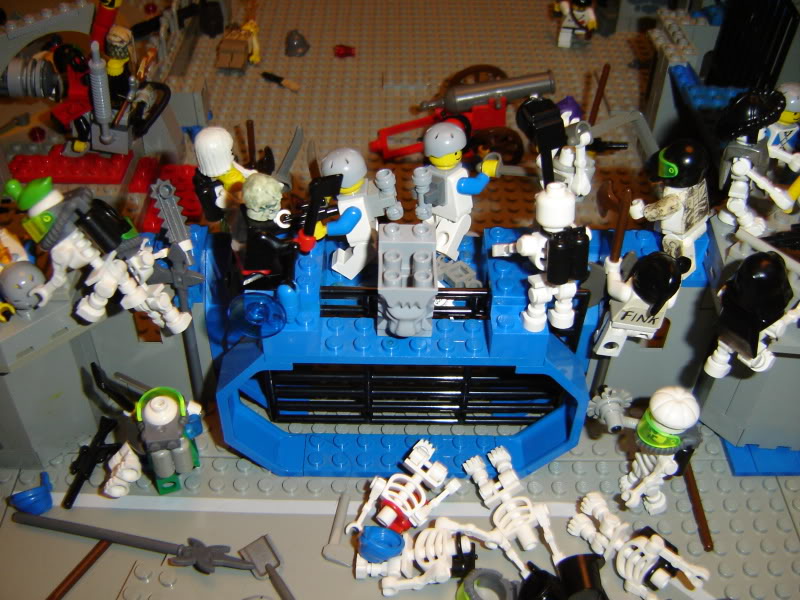 The undead assault proceeds, they avoid the well defended gate and climb the sides. The Britannian Assault Troops are beginning to be over run. One Undead is decapitated but the rest are unharmed, it's proving harder to beat undead in close combat. 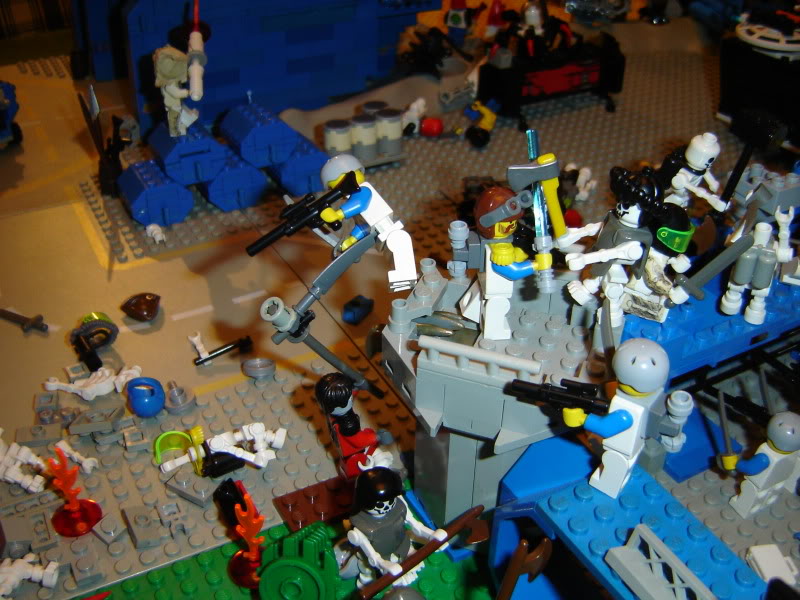 ZMJ plucks a Britannian defender off the wall with his acquired scythe. 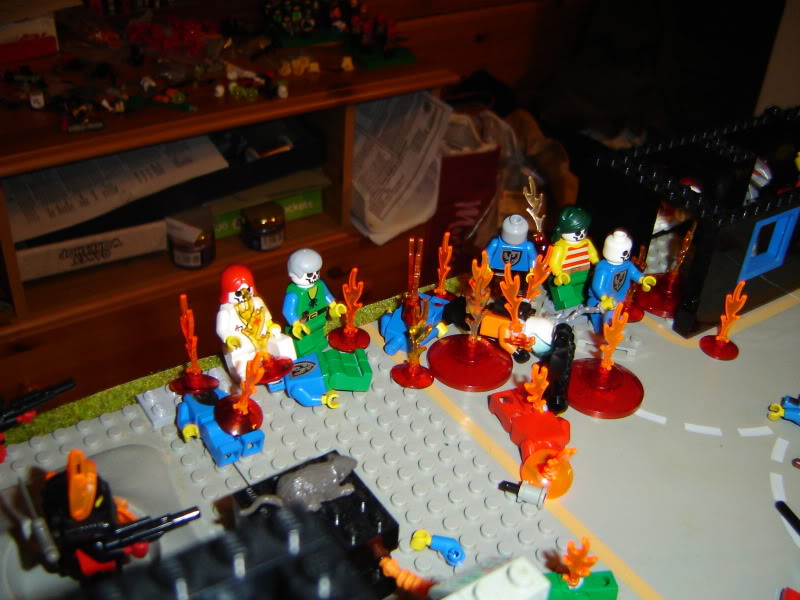 More Undead arrive from the city. 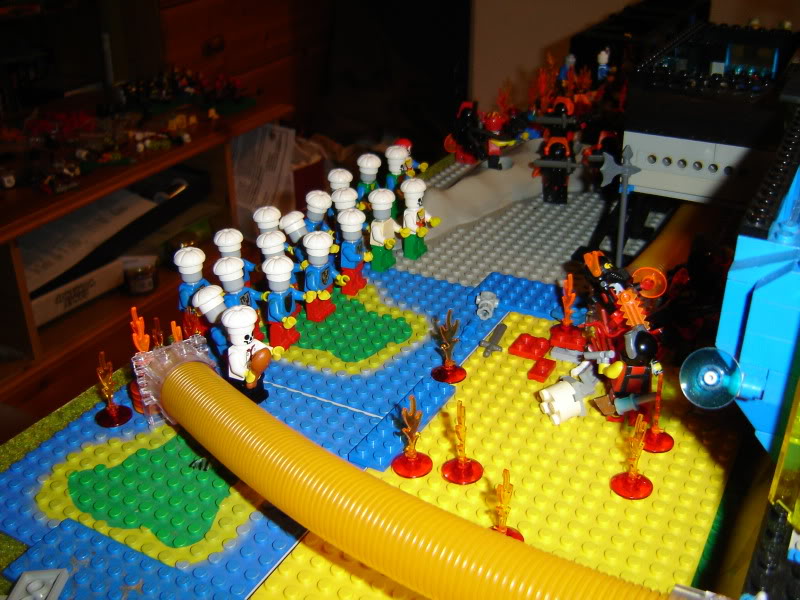 And even more undead. A party of Trainee Chefs lead by the Undead Wight, the dreaded Gordon Ramsey. 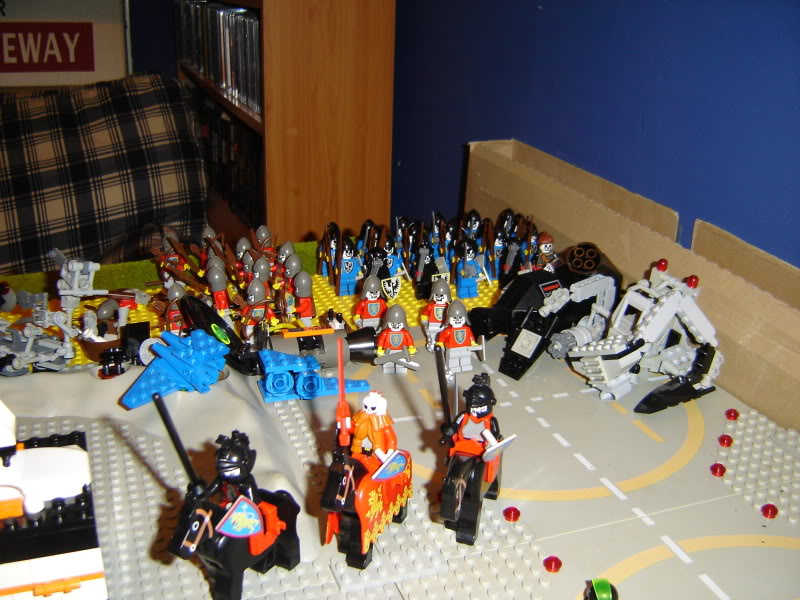 Yet another wave of The Red Barons undead Horde arrive looking for trouble.

Good lord that turn looked just plain nasty . . . lots of brikky death - I like =D I've been waiting to see an update of this for a while!

Capt. Zipps has entered the game. 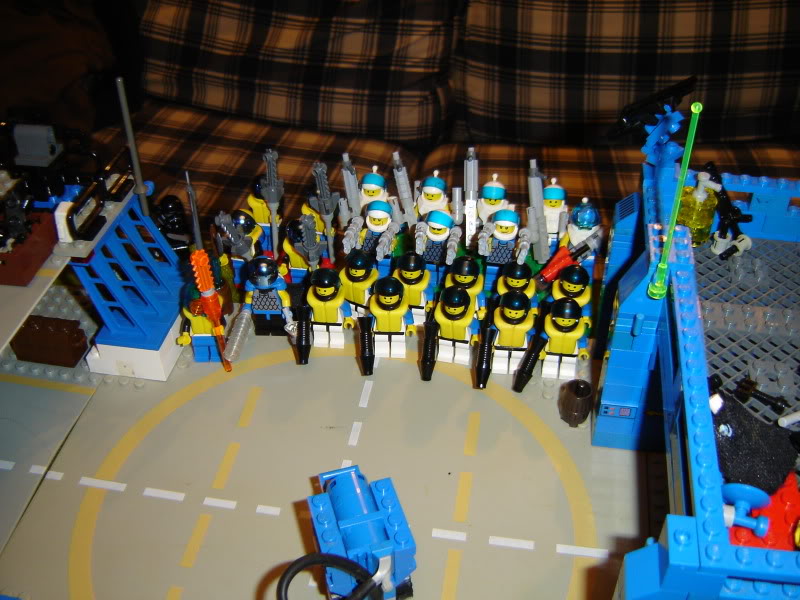 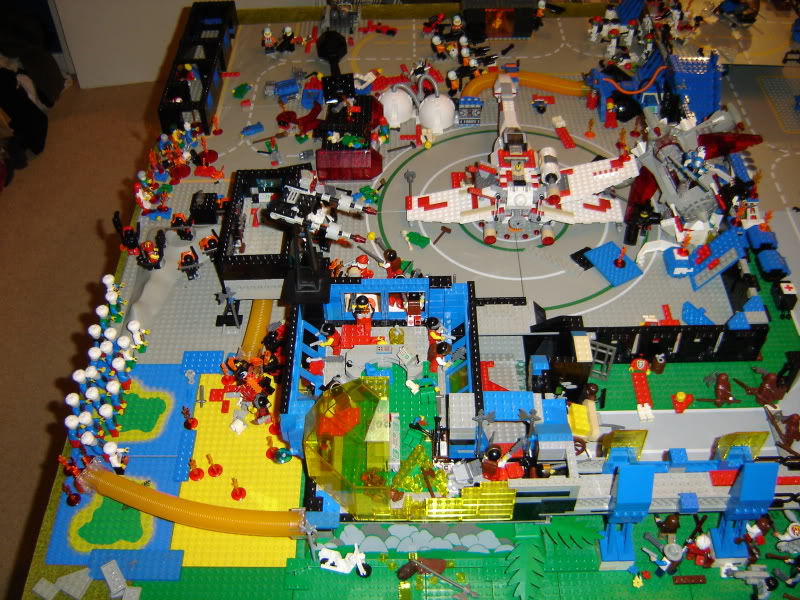 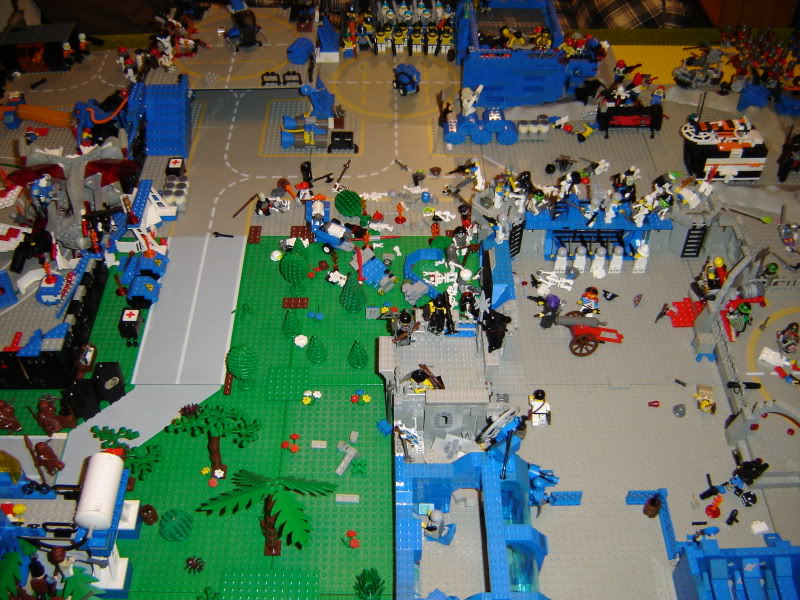 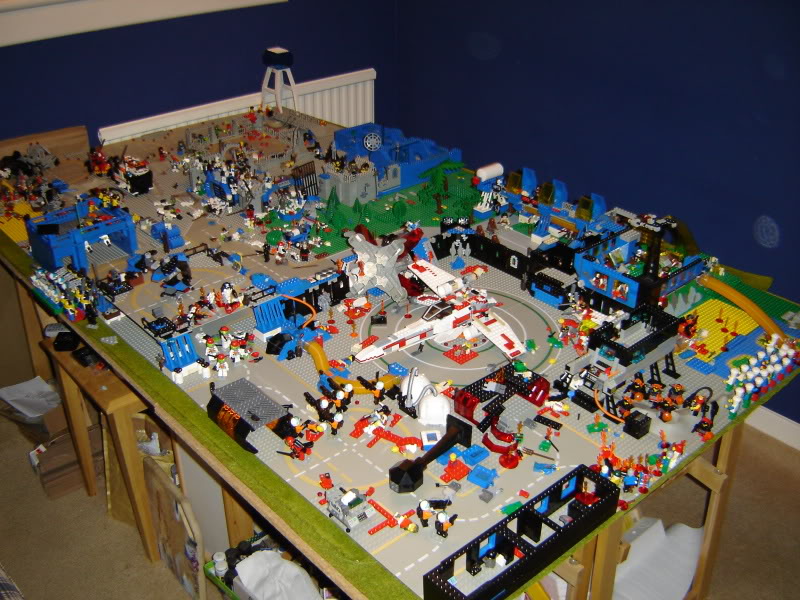 theirs soo many undead!
"some people are like slinkies there really good for nothing, but they still bring a smile to your face when you push them down a flight of stairs"
"Triangalism! What's the fuckin' point!"

Thanks guys. It's good to be back, even if I still can't use flash or editing.

@tahthing: I haven't even started using my Deadly Spacemen yet (200+ mini-figs)... and then there are the 200 mini-fig Immortals and the crew and personal guard (40+ mini-figs) of the Immortal Thunderchild still to use AND any reinforcements or other teams still to arrive.

Ok, so I'm boasting a bit but it's no idle boast, unlike some.

wow, this battle should be awesome when all teams have all troops oon field.
"some people are like slinkies there really good for nothing, but they still bring a smile to your face when you push them down a flight of stairs"
"Triangalism! What's the fuckin' point!"

Well, it's unlikely the game will last long enough to have that many zombies on the table, but I guess we'll soon find out.

why didnt i just shut up and take command of the daemons and the britanni league? 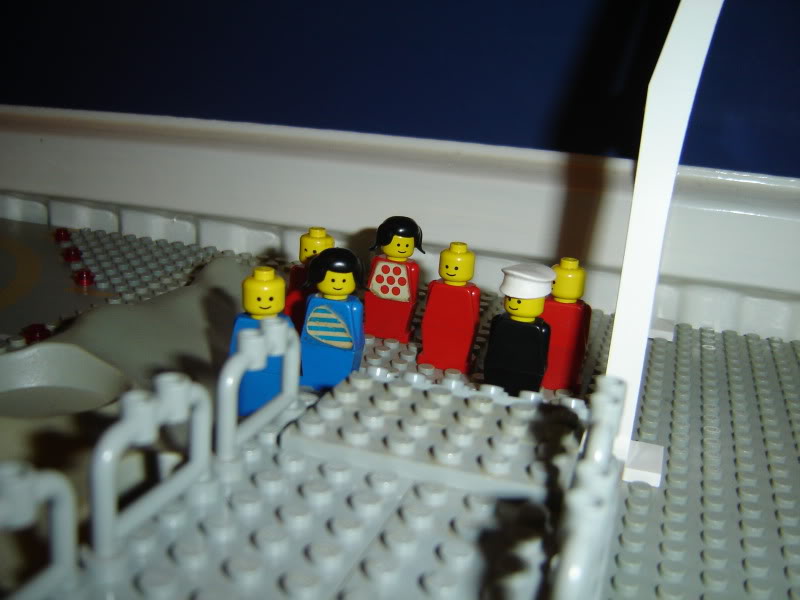 The Proto-Fig Reinforcements also arrive... or will, really soon.

wow im actually keeping up with natyla in kills!

Just saw Shaun of the Dead, I soooo want those undead to die now.

Please bring on faction Iscariot! to complete the 'inconquerable badassness objective' for the Game Master Faction

Man, I can't believe you just YouTubed me when my Flash Player doesn't work. You suck.

Ok, I'm only kidding, but you still suck for that.

I need orders guys. Carnage waits for no one. I'm fuckin' back!

Epic! Manlyness waits for no man, on to the slaughtering!

And did you mention deadly spacemen? I see an alliance of epic porportions on the horizon...