this is awesome on so many levels!

another dsm dead how many guys have i left? 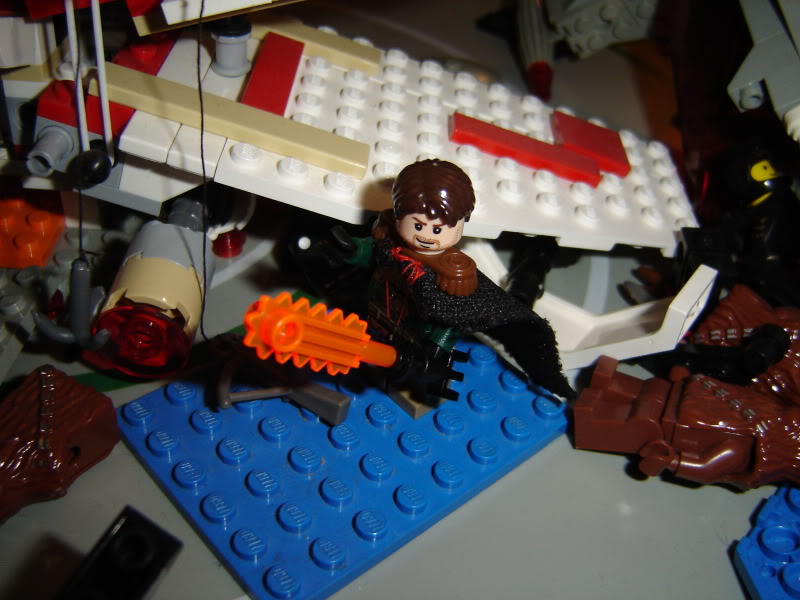 Captain Badass dusts himself off after the crash. 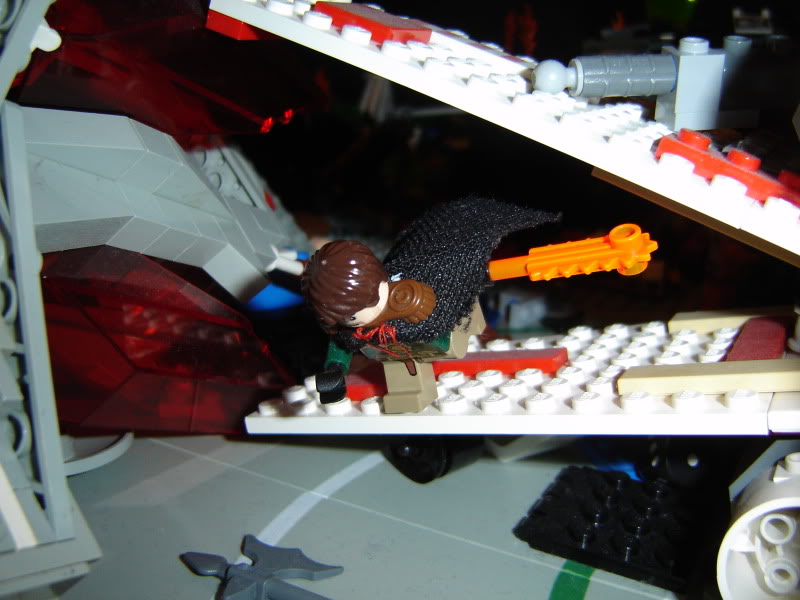 He then dashes off, through the wings of the X-Wing and away from the few remaining men he has. 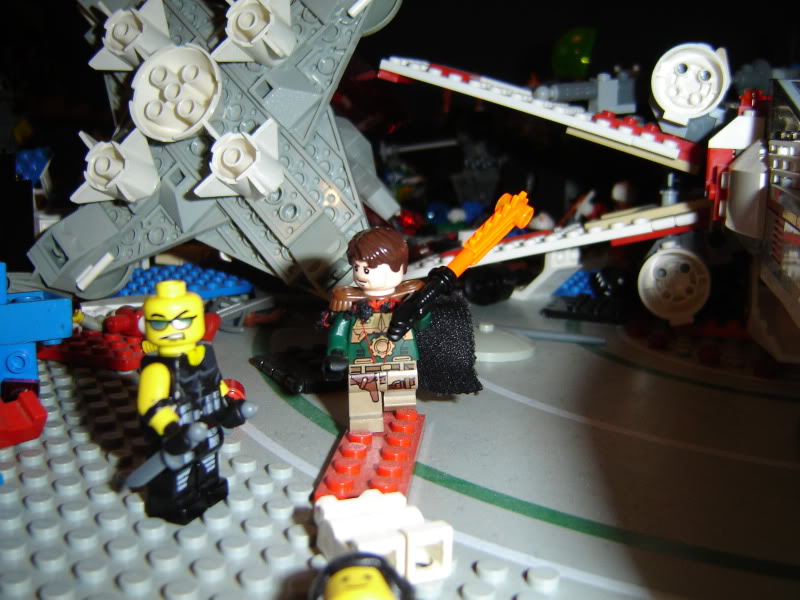 He meets a weary traveller who has also survived the crash. May I lend some assistance, perchance? 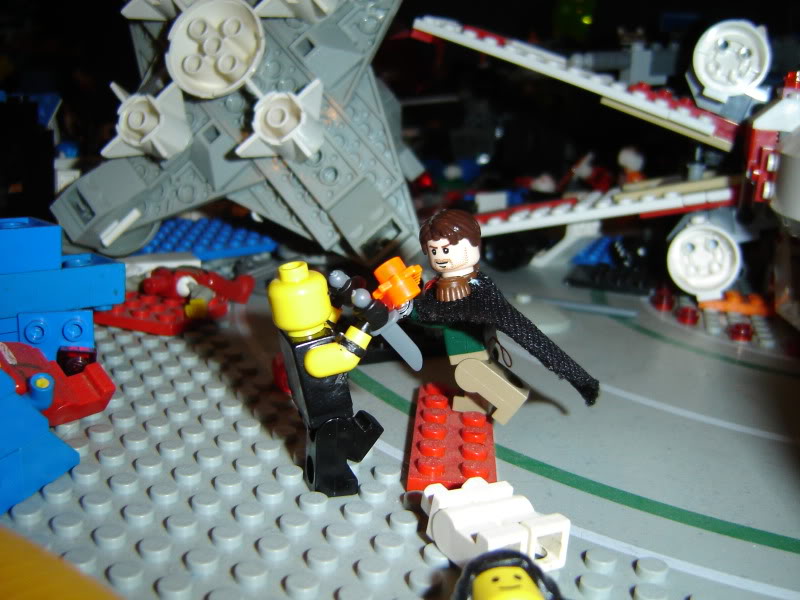 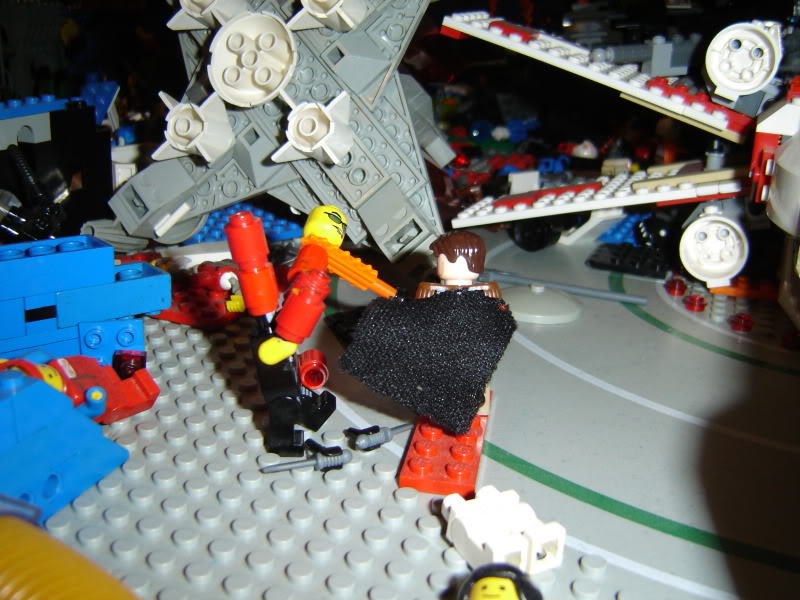 ...and becomes another statistic on the OTC non-parry learning curve. 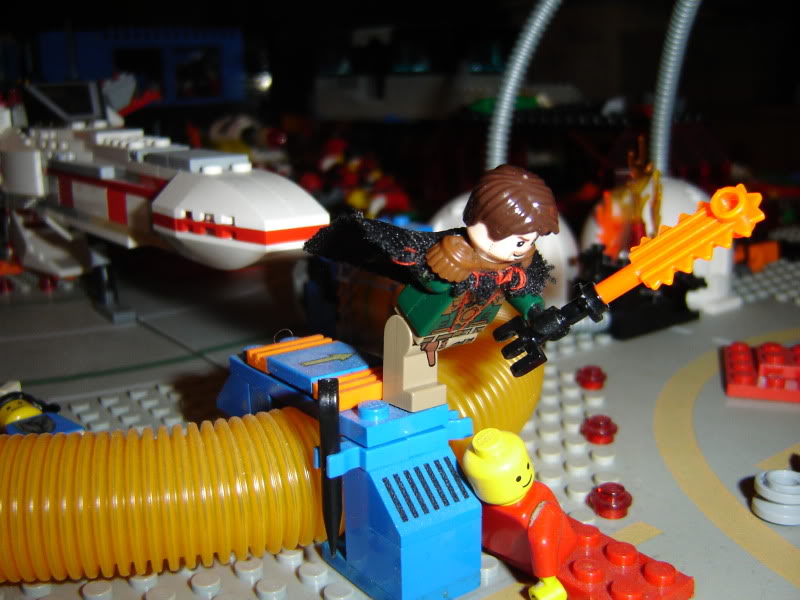 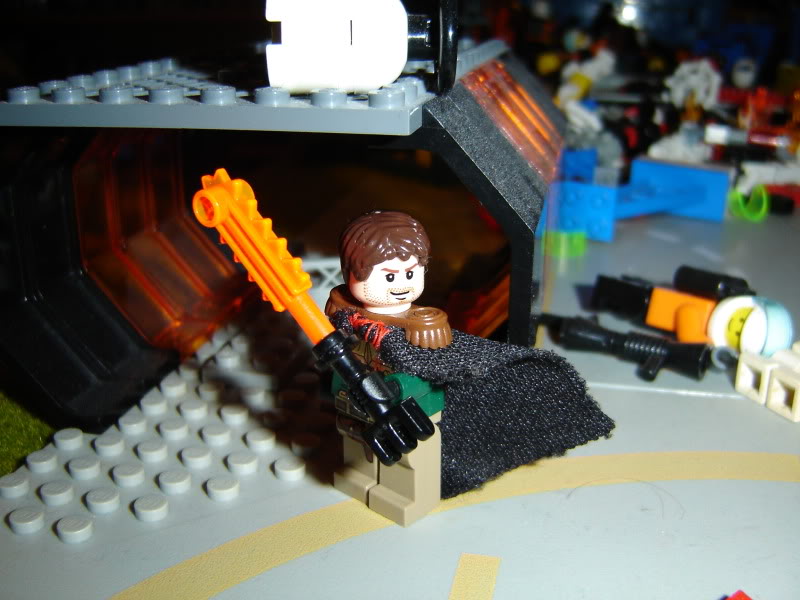 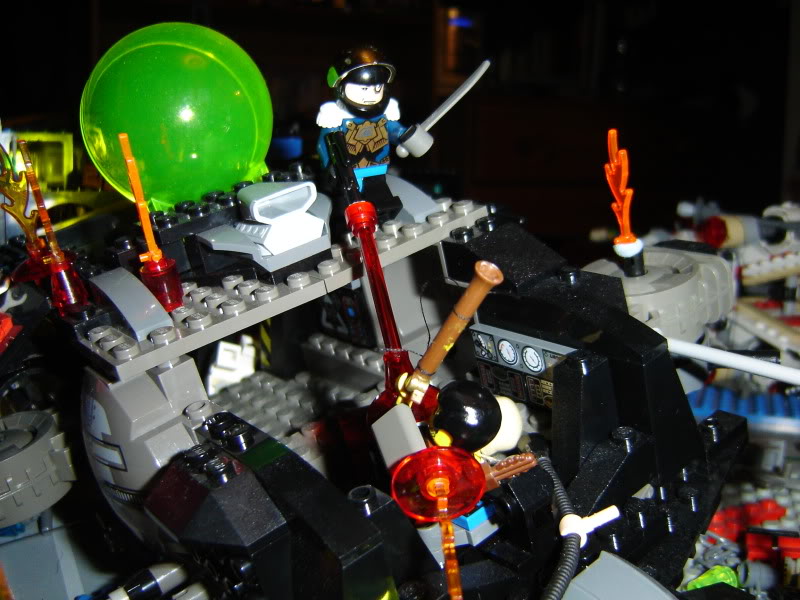 Meanwhile back at the crashed Gunship...

The Peach Pirate survivor in the wreckage turns out to be a minor Hero and he puts all his skill into a well aimed shot. 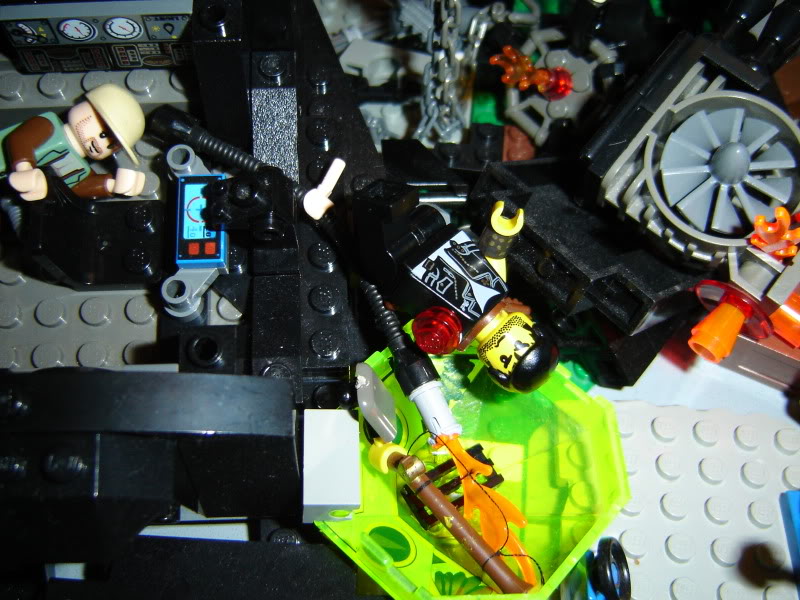 mAd MaX sAm takes a bad hit and loses an arm before falling over stunned. He's not dead yet. 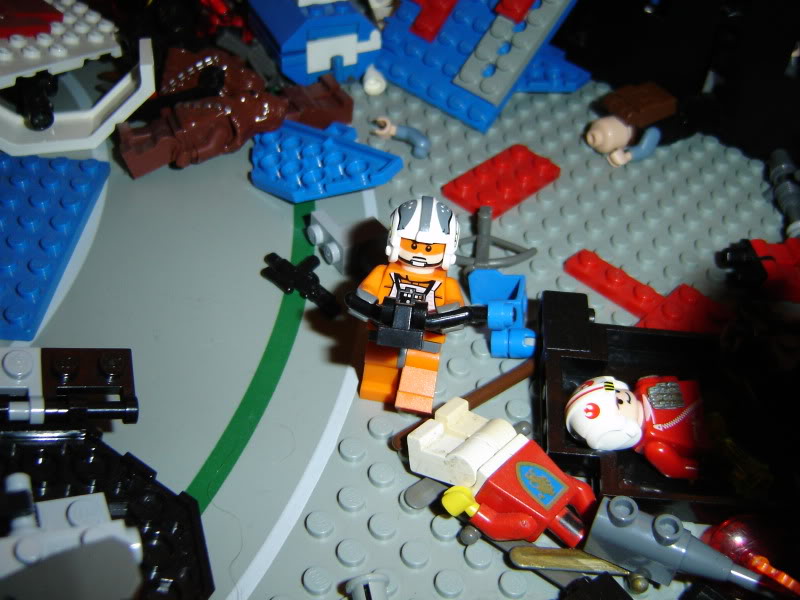 The rear gunner is still a bit dazed and can't figure out what happened. 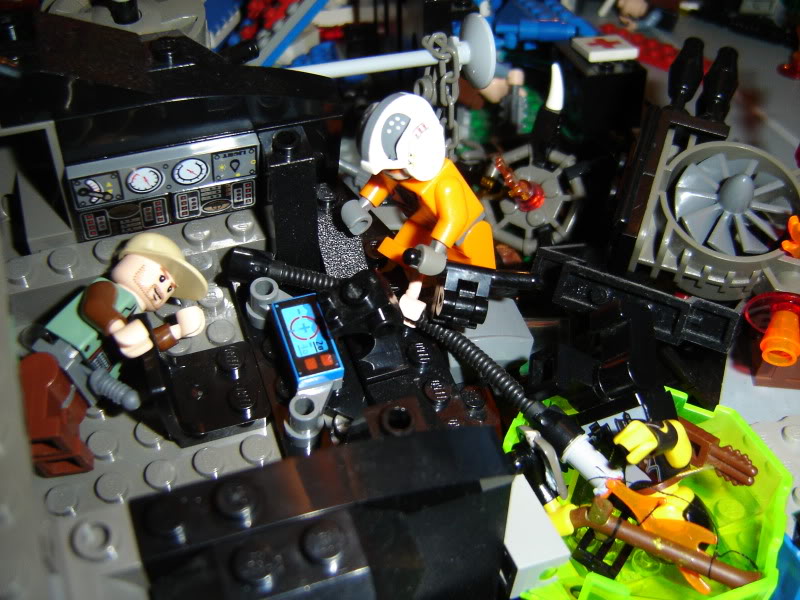 He shambles over to the ruins of the cockpit, on the way past he accidentally knocks mAd MaX sAm into a flaming canopy, Ahh! It burns!!! He's still not dead but he'll have a face like well done bacon. 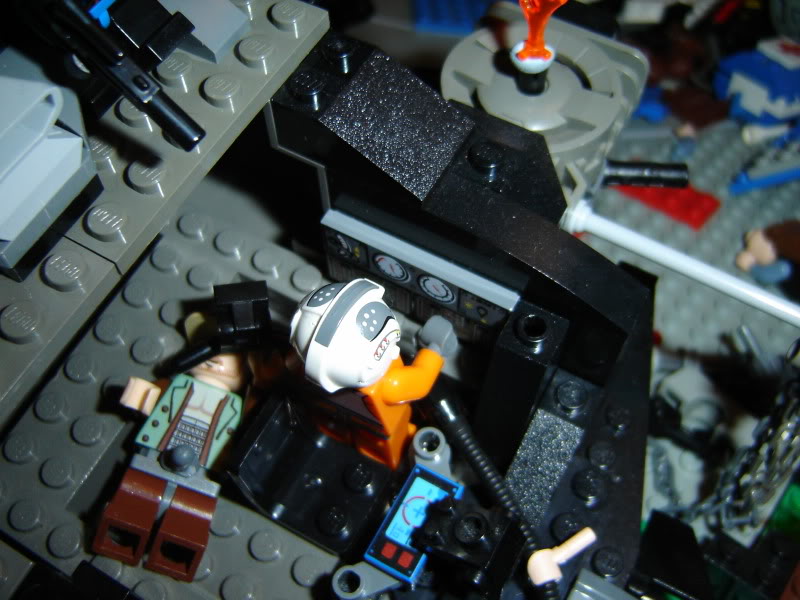 Still being confused and disorientated the gunner doesn't quite understand what he's doing, but this series of instructions and codes he's putting into the computer seem particularly important... if only he could recall why... Well, what ever it is it's done and look, lots of pretty flickering lights who's numbers seem to be ever decreasing. 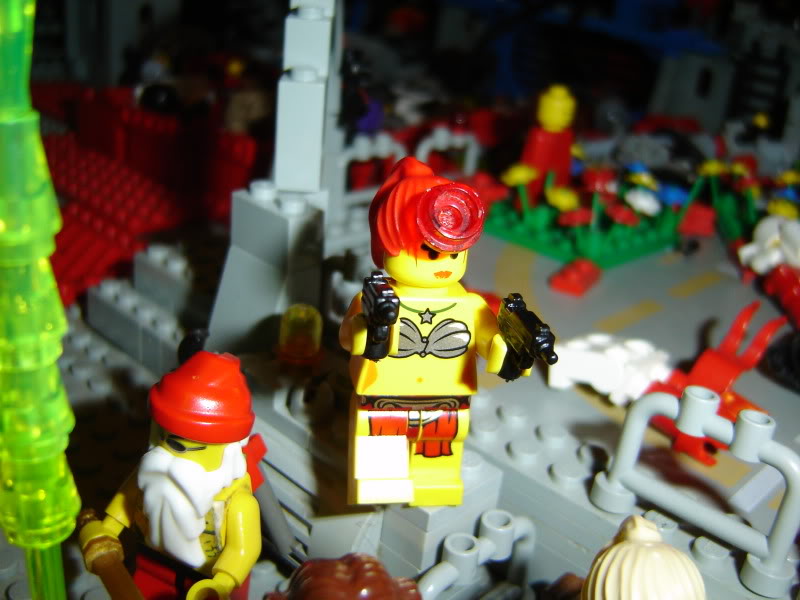 Hey! Who's playing around with a laser target on one of Manly Fuckin' Santa's Hoes?!? 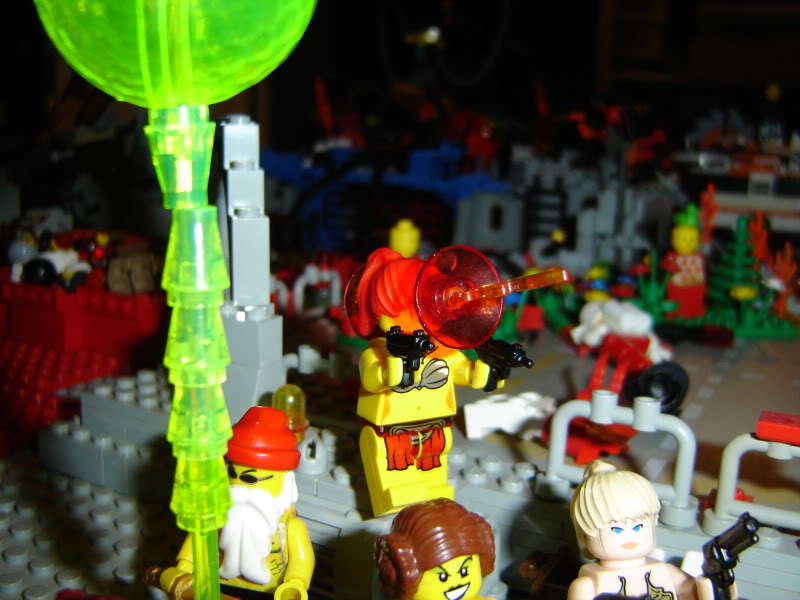 Her head explodes with a scarlet flash of energy fire, but from where?!? 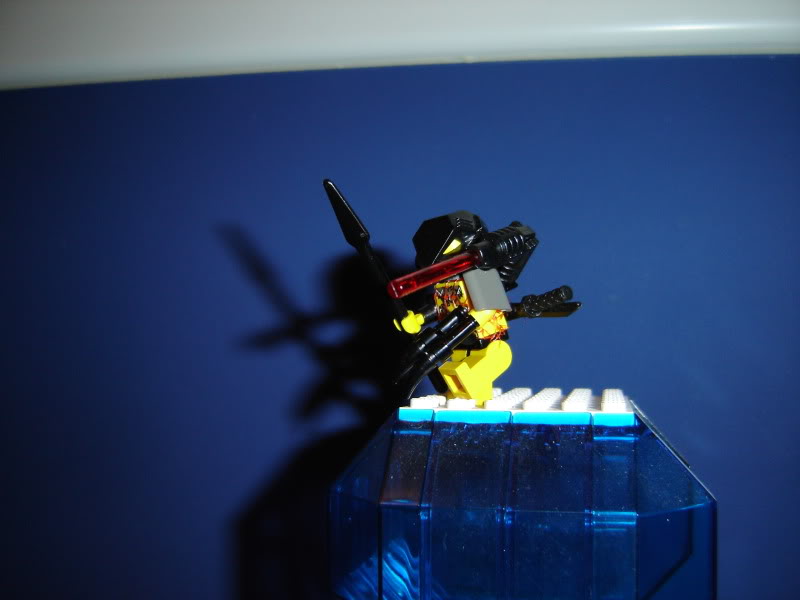 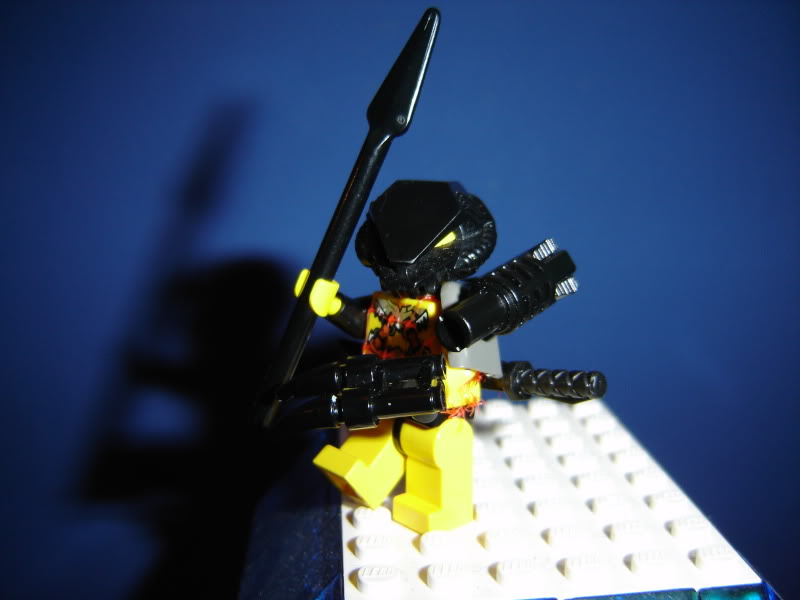 Predator roars a challenge, who else would challenge the might of Manly Fuckin' Santa. Folks! they gave you AvP now I give you MFSvP... which oddly enough is the same sound men make when they catch their penis in a zipper. 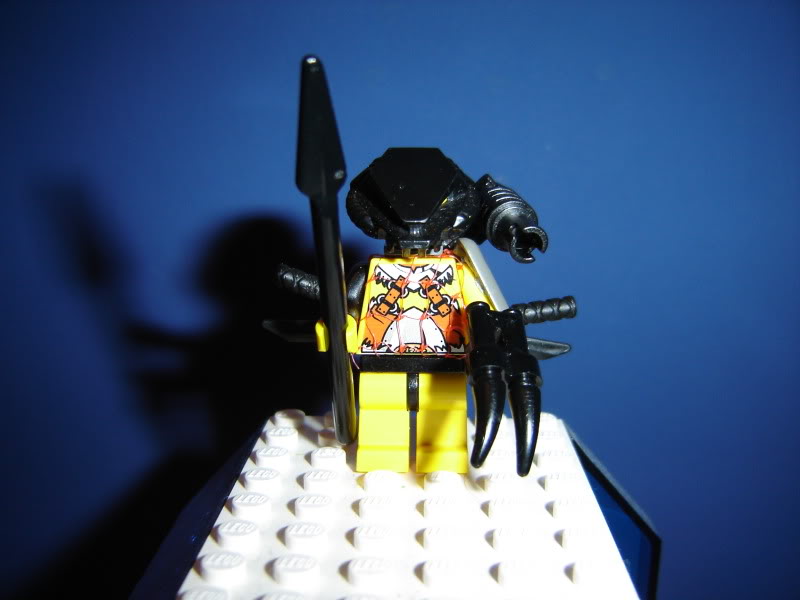 Thanks RJ for the Alien and Predator ideas.

Predator's shouting a challenge to Manly Fuckin' Santa and shooting one of his hoes? He doesn't realize how fucked he is, he should have sniped MFS when he had the chance 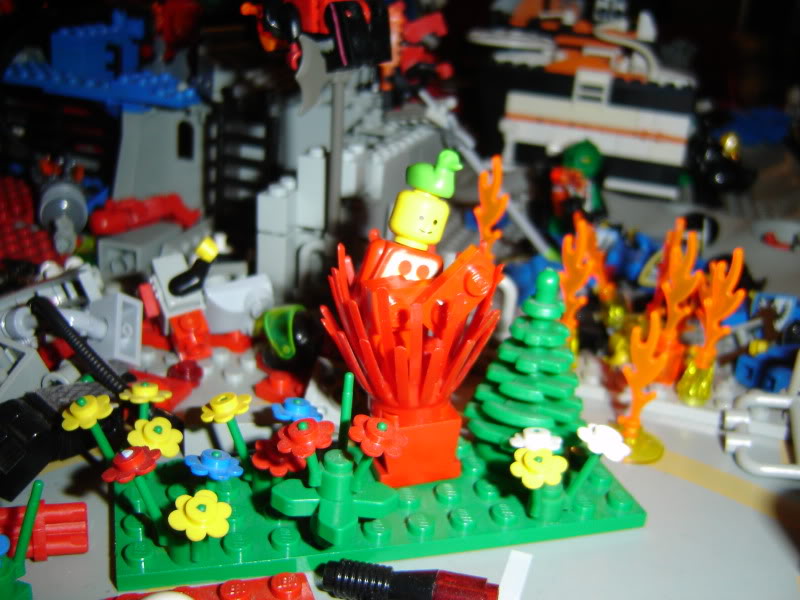 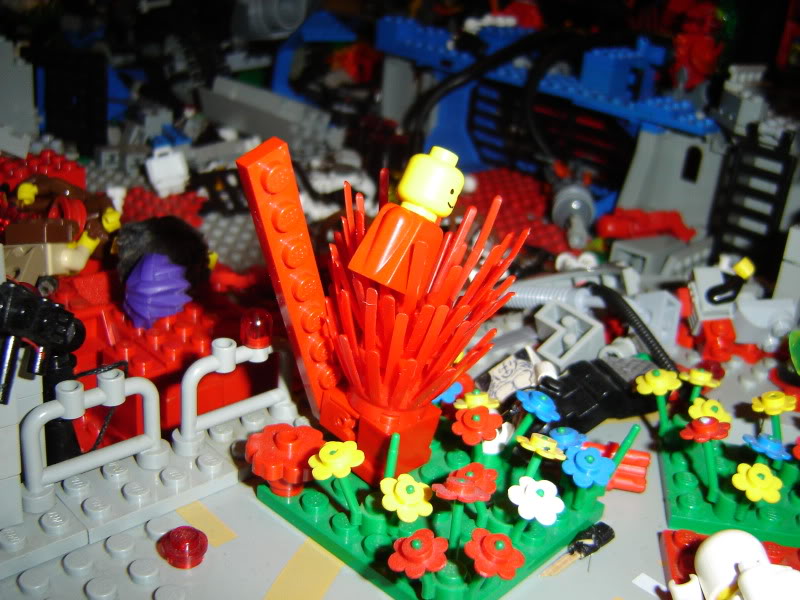 The reek of death and carnage awakens two more DSM who hatch from the last Proto-Figs. 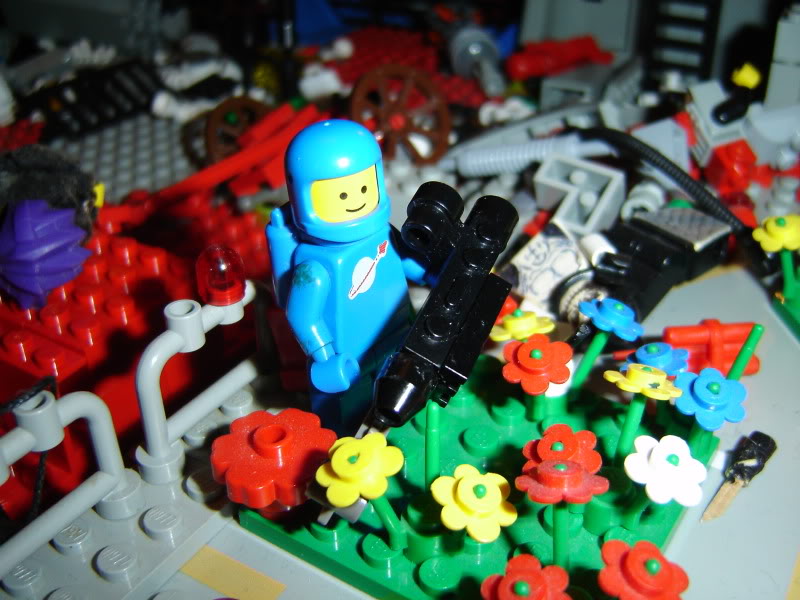 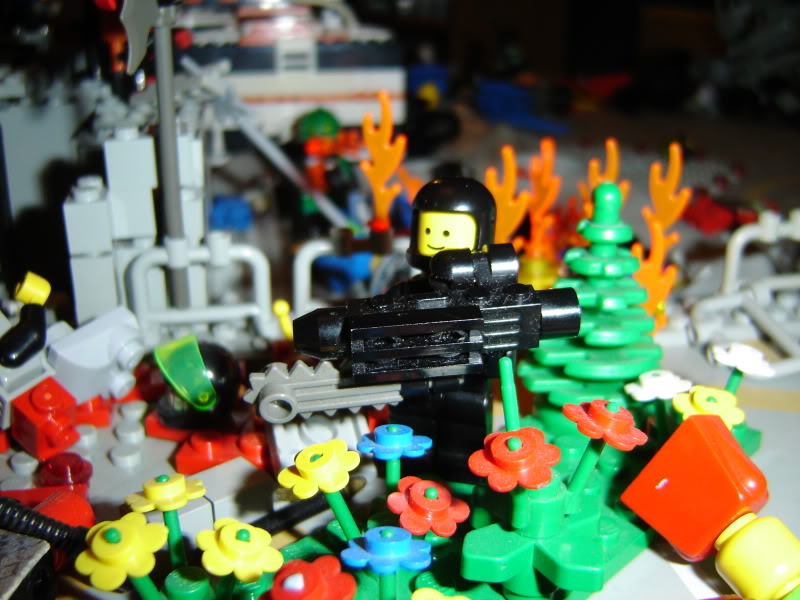 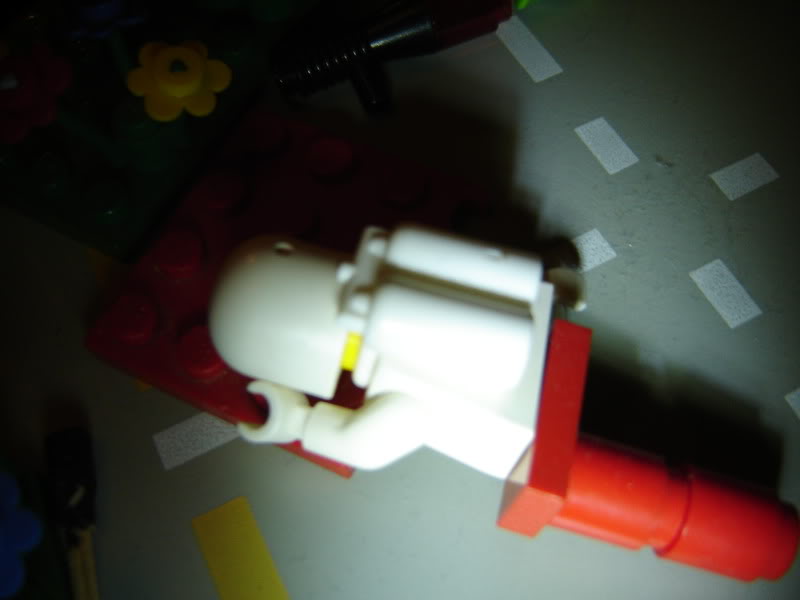 But that's far from all. The remains of the White DSM take on an eldritch glow... 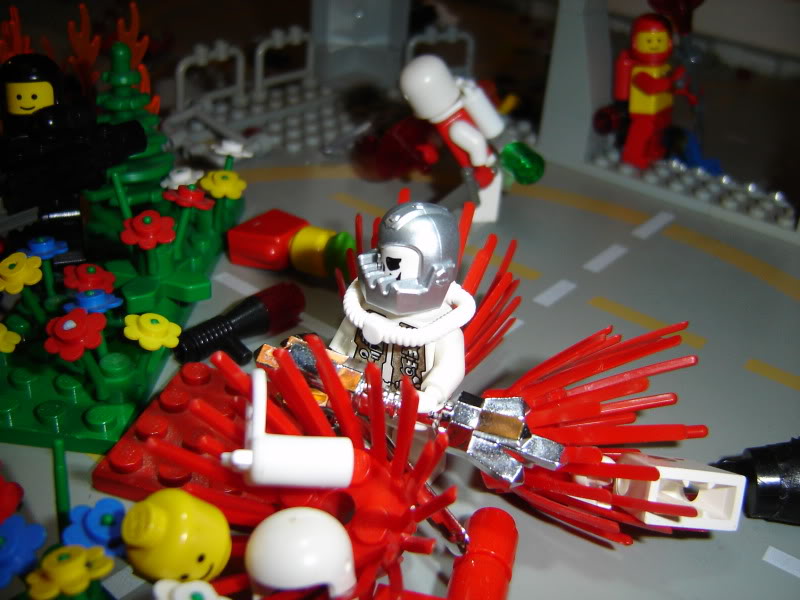 ...and explode! Revealing a DSM ALT account. H'mm, I wonder who this is supposed to be? 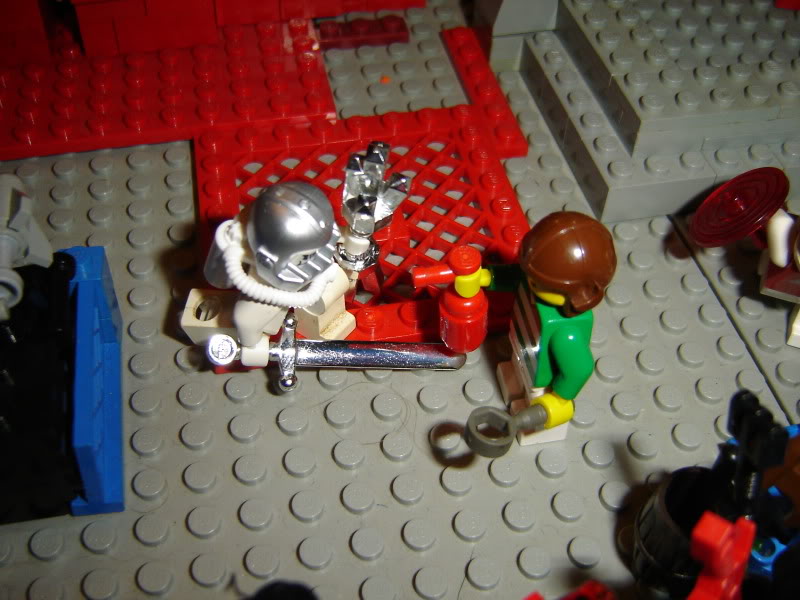 Without pause ALT DSM Silvadream bends the knee and pledges his undying loyalty to BoB. BoB accepts his devotion and the DSM have a new ally. 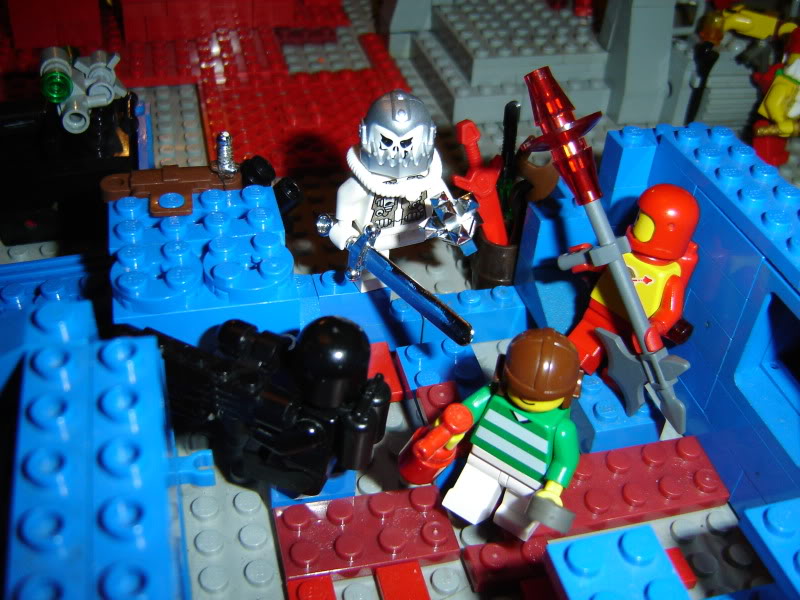 They all sprint for the hole in the blue building. 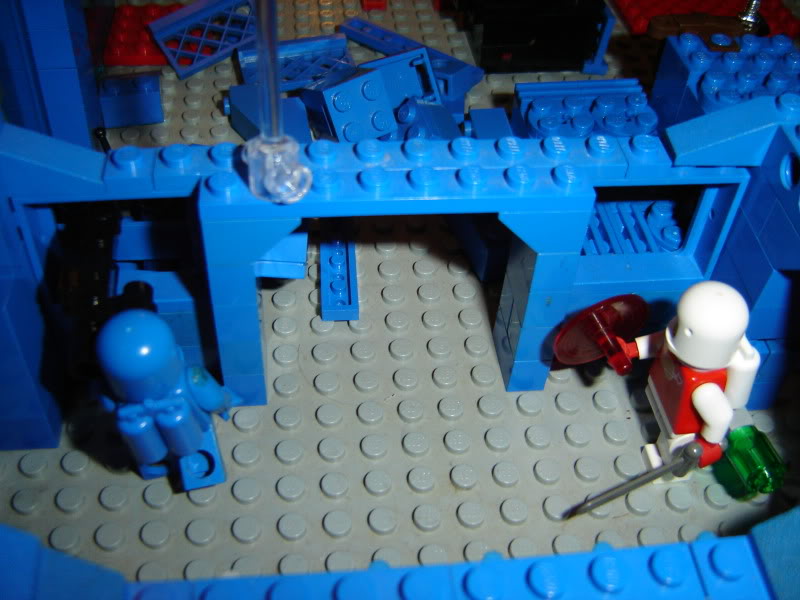 Where they take up defensive positions. The base bristles with response fire.

Lol, this battle is getting more and more random. Which of course means it's getting a lot more osum.
Top

WTF? Can anyone join this game or something?
My youtube channel:

"If someone ever tries to kill you, you try to kill them right back." -Malcolm Reynolds

By my current estimates based on destruction so far in comparison to the number of new players joining the game, it will be round 37 when this game concludes naturally, the previous 5 rounds will have been a Manhunt for the last surviver who'll probably be a hero.
Almond Status: ACTIVATED
Top

Huh? You actually think I would let Silvadream near my stuff? Ah-hahahaha!

Not even if I got to kill him with my hands first... um, well probably not... although, yeah ok, maybe I would. Just like with J+B I don't mind sacrificing his effigy on the alter of Brikwars. SEE! I'm benevolent AND magnanimous but you can fuck forgiving. BoB and Silvadream are now DSM Heroes, they didn't have any so that needed to be balanced. Arkbrik got to play as himself (well he is Arkbrik after all) but I have another sort of indirect surprise in store for another forum member...ish, but only as an NPC.

I know there are many people who might want to be included here but it just wasn't possible. I feel Piltogg should be in this. Maybe next time.

Mm no, I don't think its necessary for everyone to get their cameo in there, though it's of course fun for the person playing.
Westeron Restored (Fantasy BrikWars)
My Twitch - My blog
Top

dilanski wrote:By my current estimates based on destruction so far in comparison to the number of new players joining the game, it will be round 37 when this game concludes naturally, the previous 5 rounds will have been a Manhunt for the last surviver who'll probably be a hero.

Actually I'm planning on finishing it all come my turn.

Warhead wrote: I feel Piltogg should be in this. Maybe next time.

One battle field can only contain so much awesome you know.
Top
Post Reply
145 posts