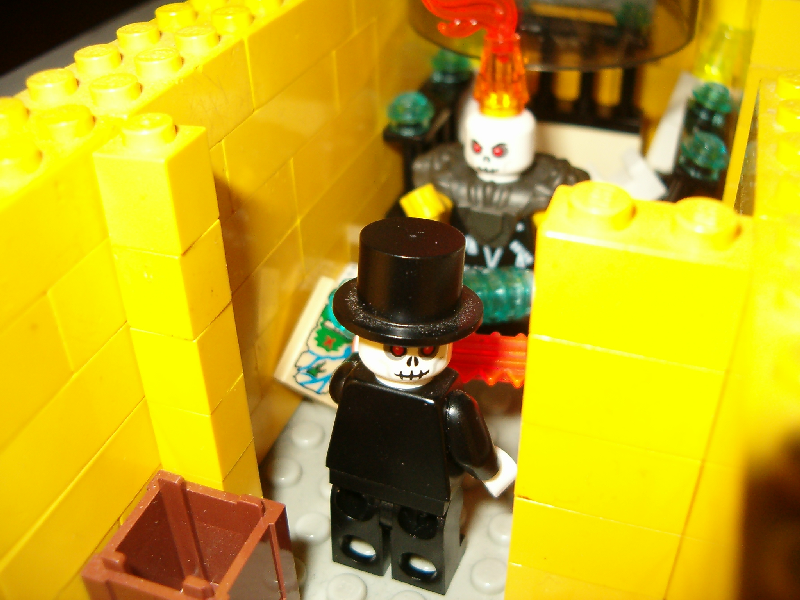 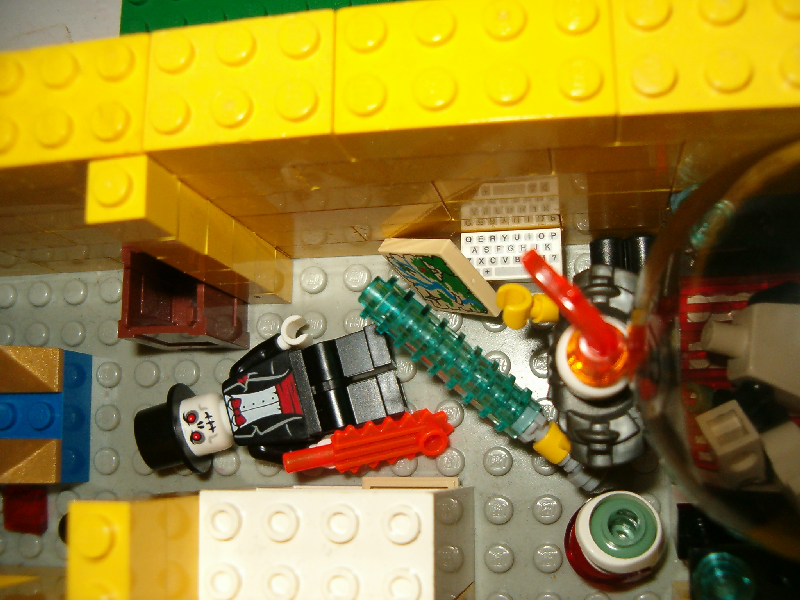 Not being able to defend himself just for a split second Zombie Lincoln is slain.
But can that which does not live be killed? 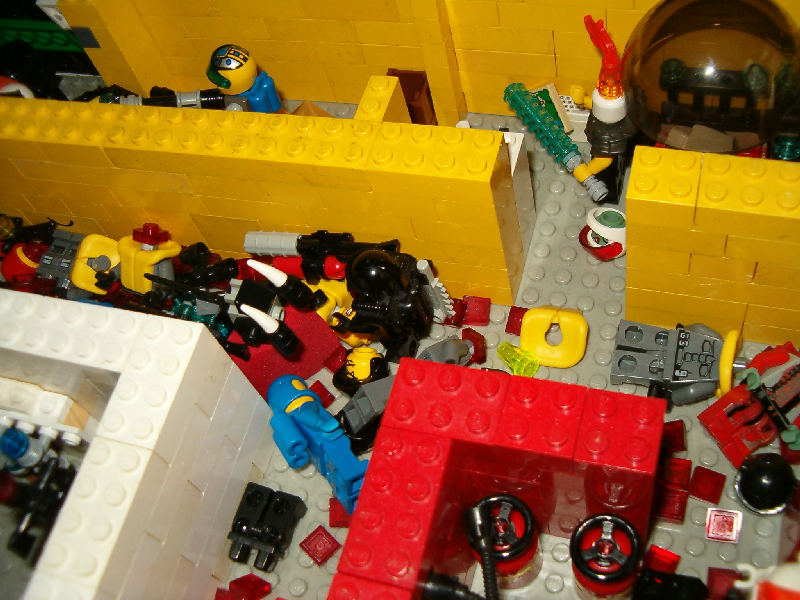 On his way back to the bridge the Terrokhan joins Apollyon in the corridor of death but there are no targets to be seen for now. 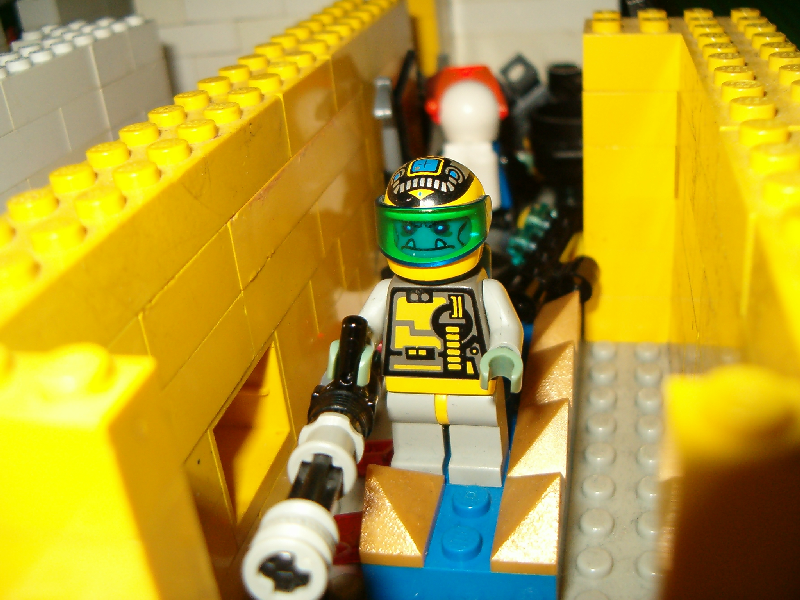 The minigun wielding undead turns to avenge his masters "death". 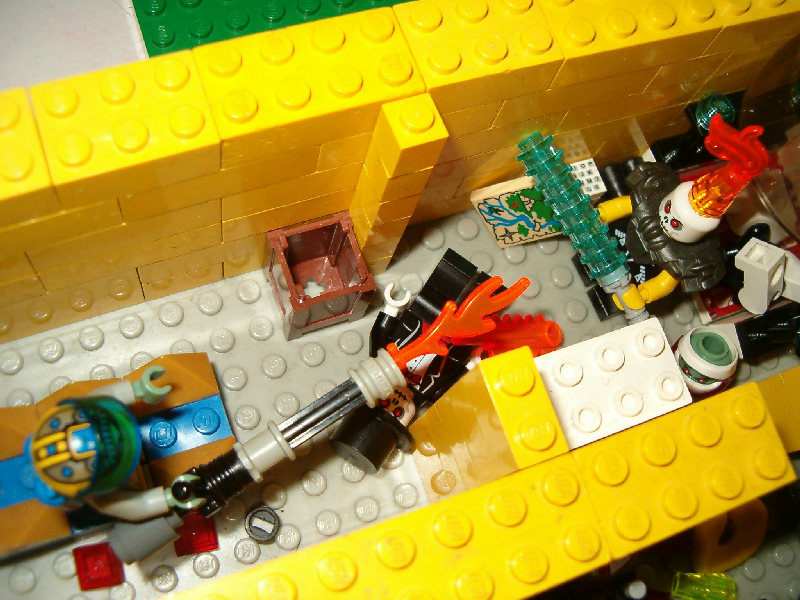 Little does an undead zombie know about the powers of a Nova Sword. 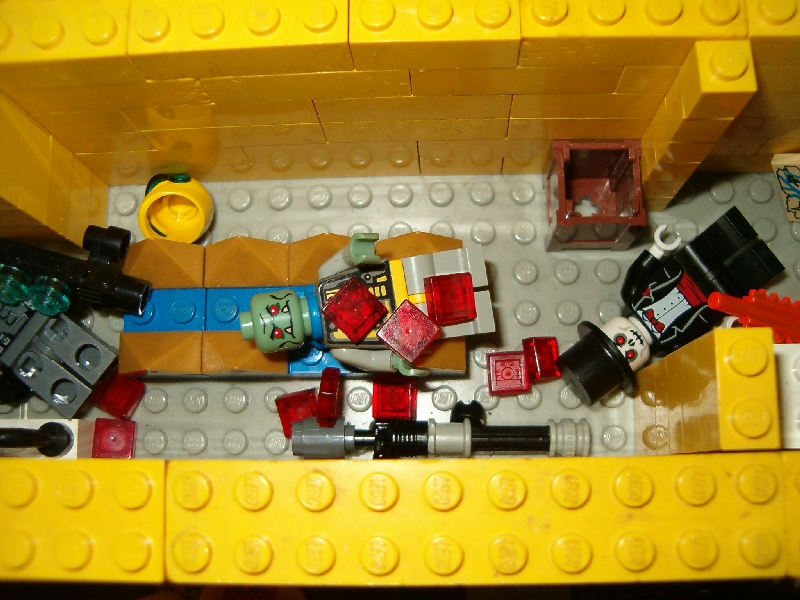 Warhead deflects the rounds fired at him and kills the undead. 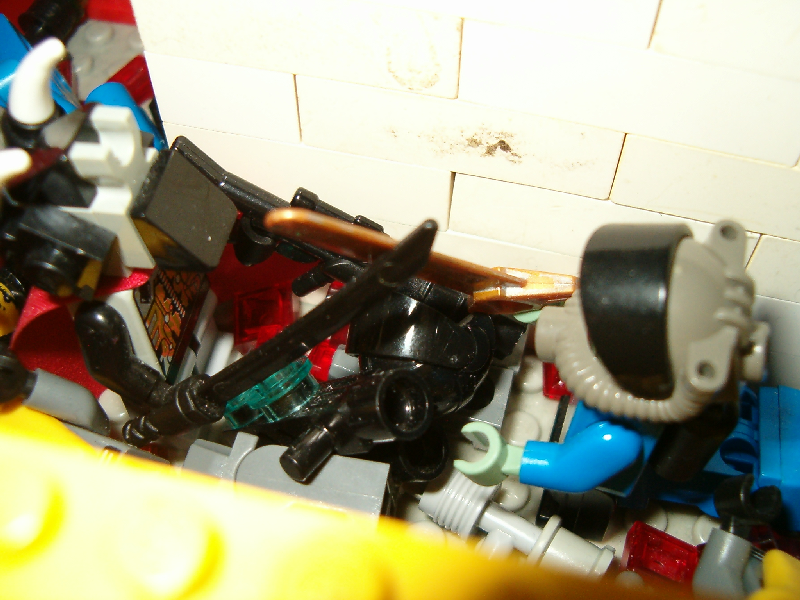 Another undead spaceman decides to fight the next target in range, Apollyon. 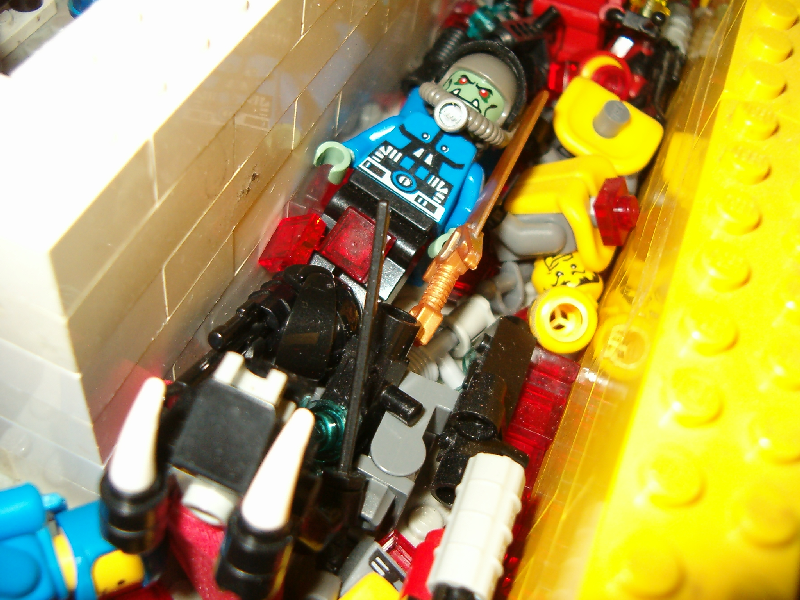 But fighting heros is dangerous even if you are already undead. 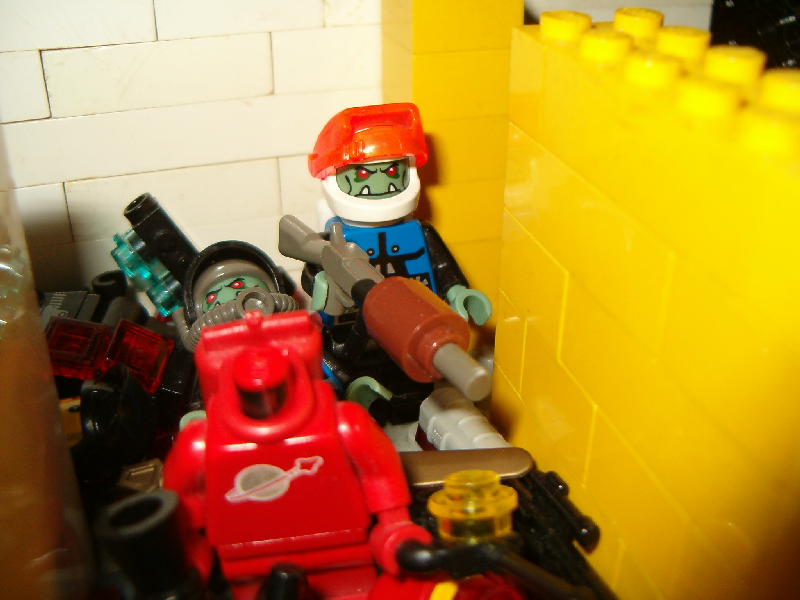 The next one fires at the Terrorkhan, but cannot penetrate the heavy armor. 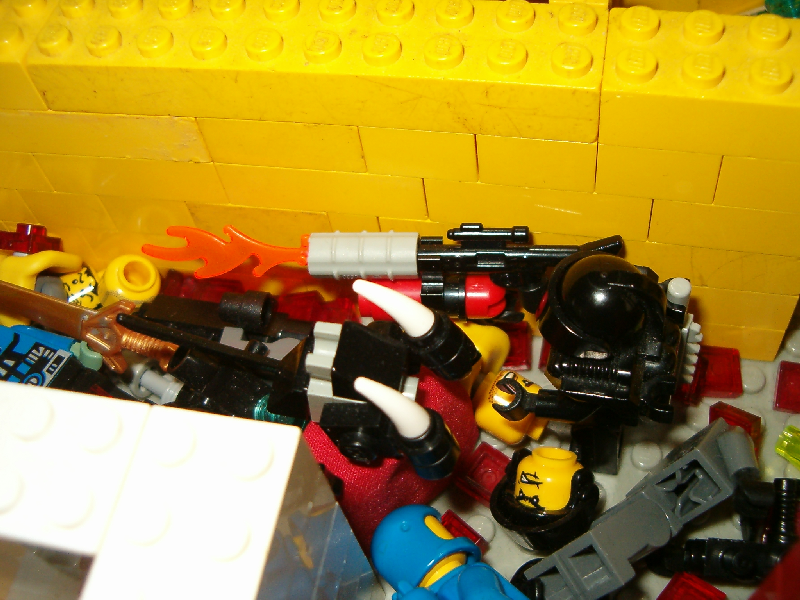 The Terrokhan returns fire and kills yet another undead. 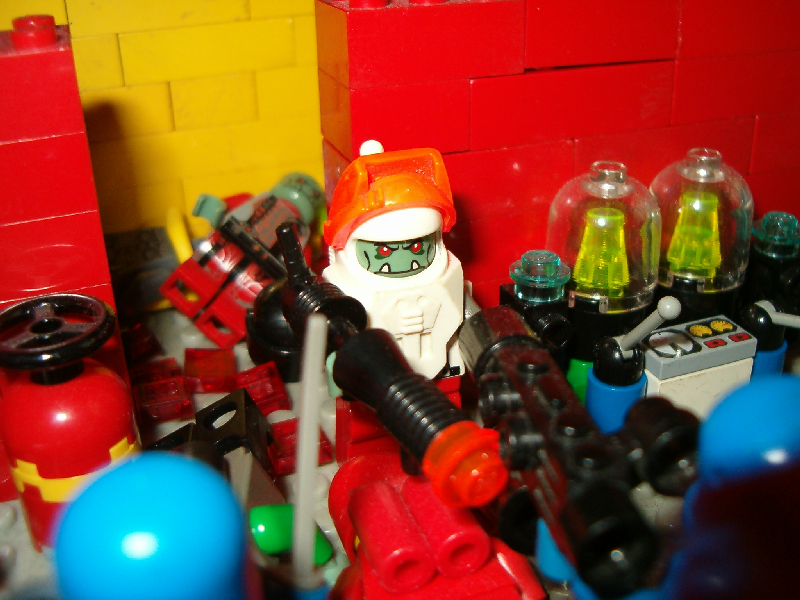 The streak of bad luck continues for the undead as the last one's weapon jams. :-/ 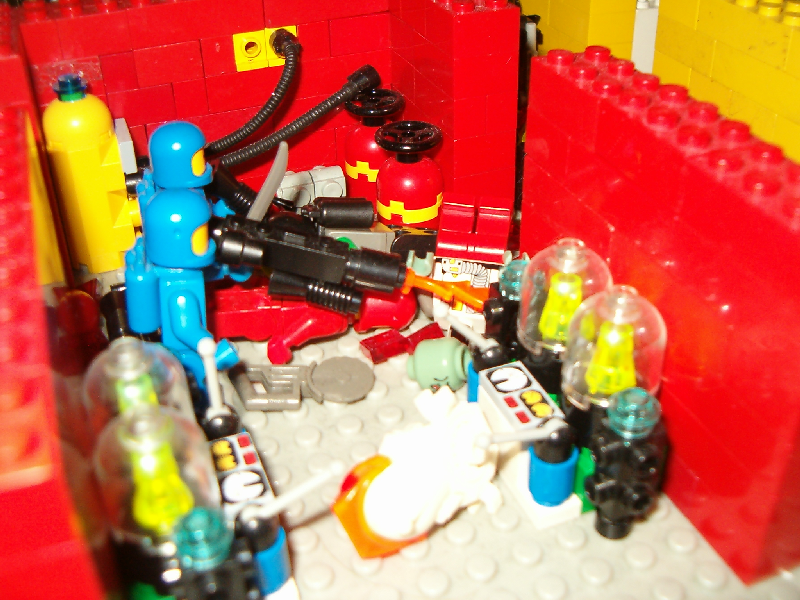 Blue with the Assyrian laser rifles rips the last undead on board to pieces. 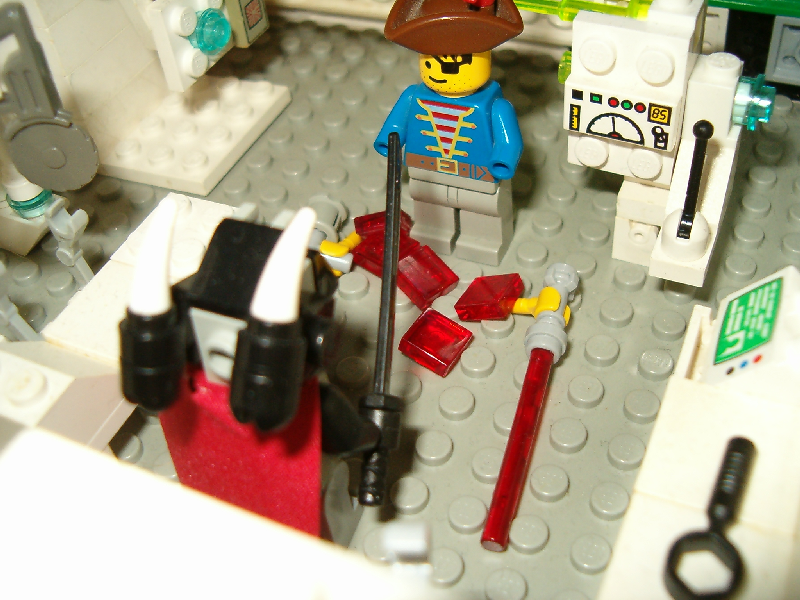 Apollyon hunts down the last pirate and cuts off his hands rendering him helpless.

This is also the end of the battle... but the story of the INS Hyperion continues further down.


Now for some Overwatch shots of the carnage before the Hyperion gets dismantled (sniff). 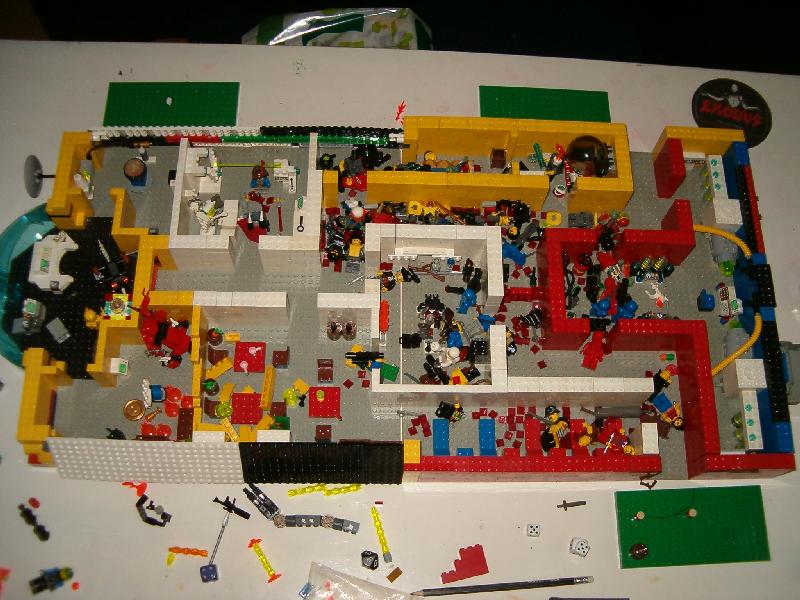 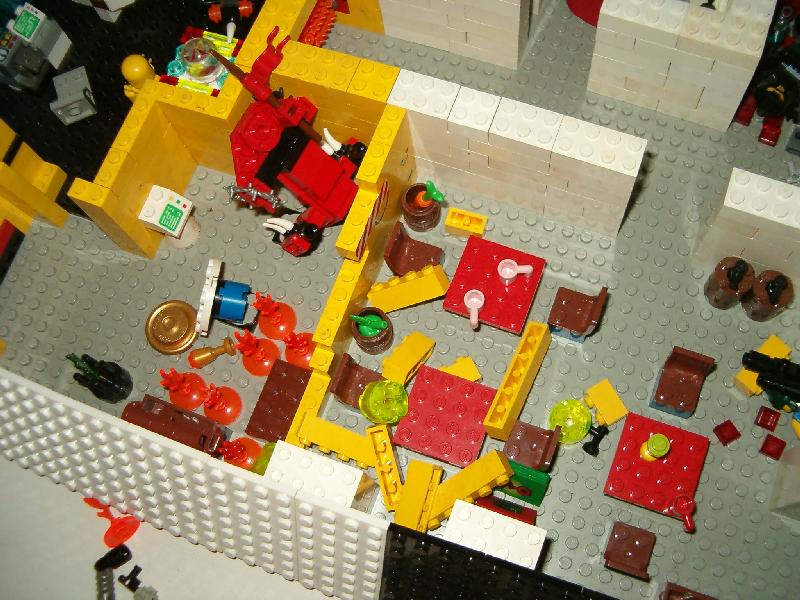 Warhead's room and the ship's mass. 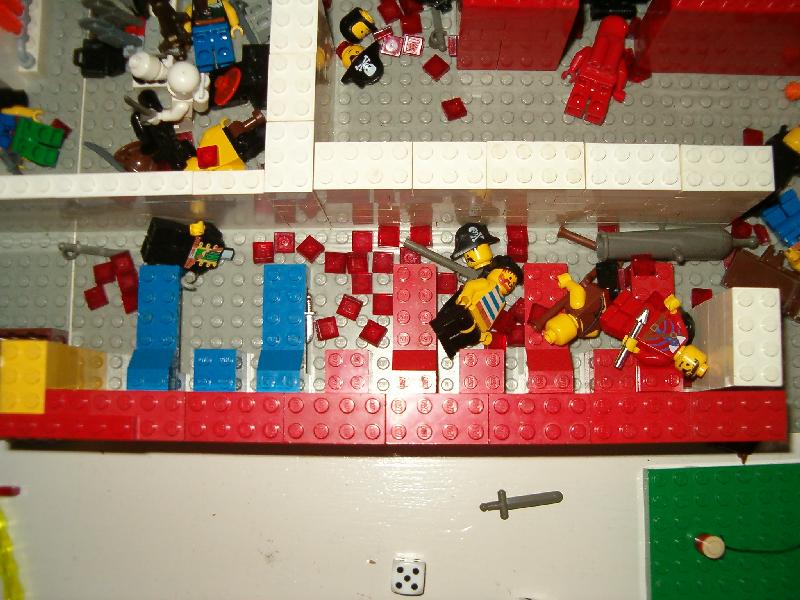 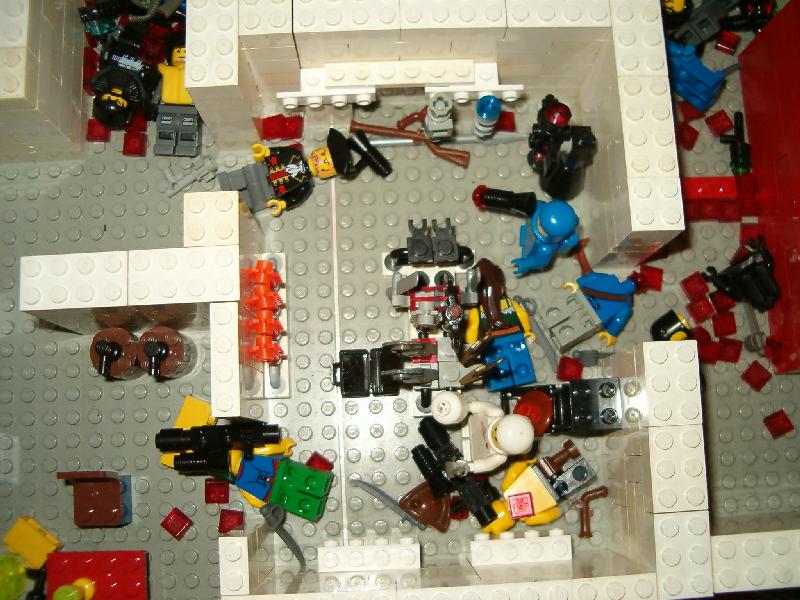 The armory everyone liked to enter so much. 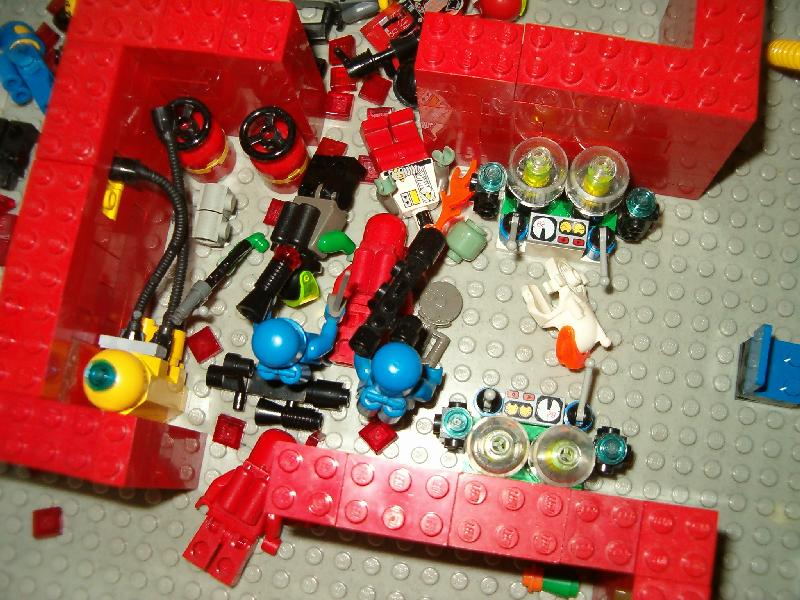 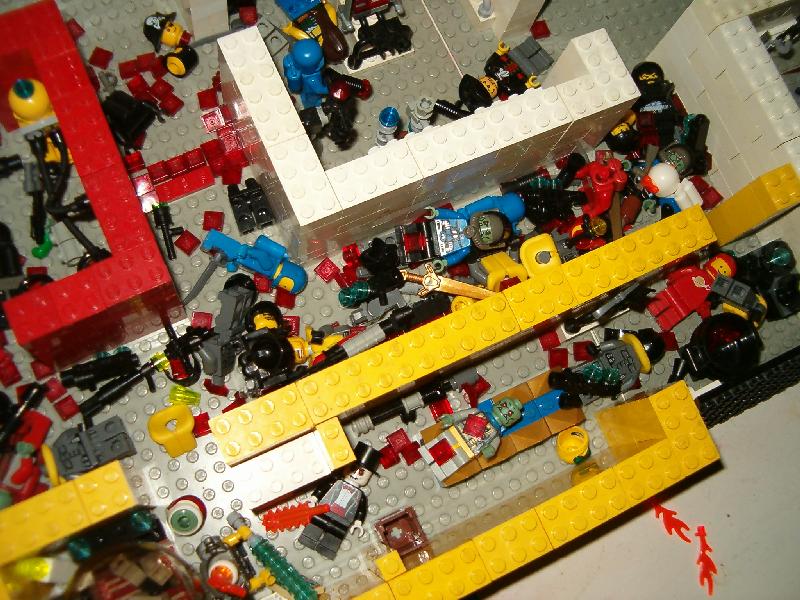 And the corridor that saw a lot of death. 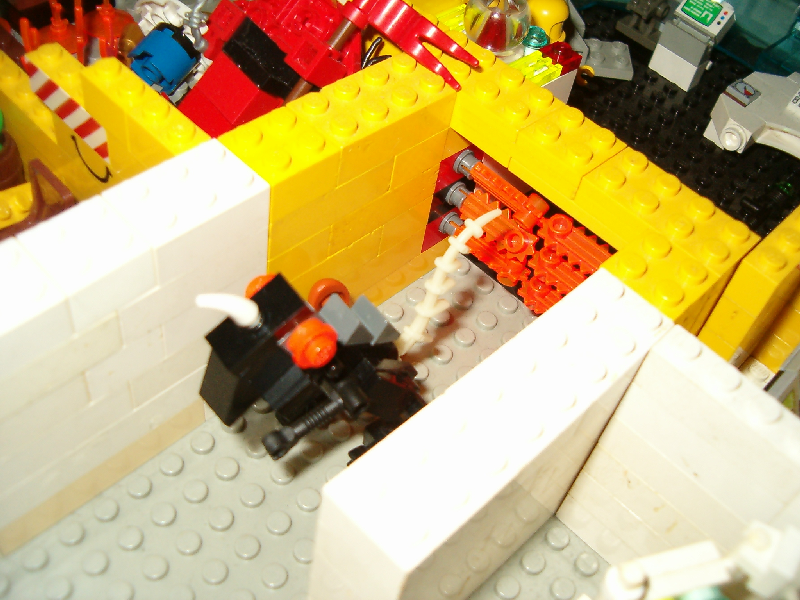 Two things that sadly were not put to use: the OTC door and "Beaky", a robotic velociraptor contraption.

This not the end yet, hold your breath for the

Indeed, characters like Zombie Lincoln cannot be killed permanently but they can be captured... 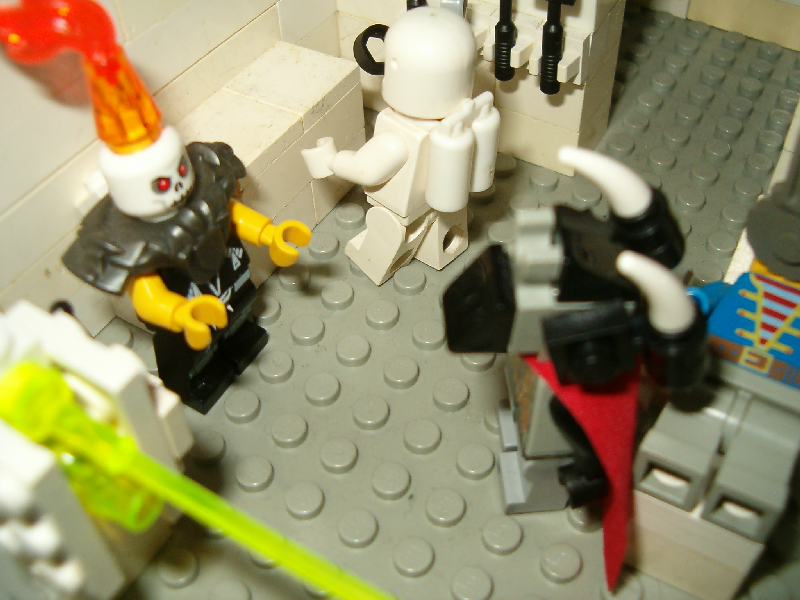 Apollyon: "Zombie Lincoln has powers over the Undead. Perhaps he can be useful now that you have captured him. You could send him anywhere once your warpgate is repaired." 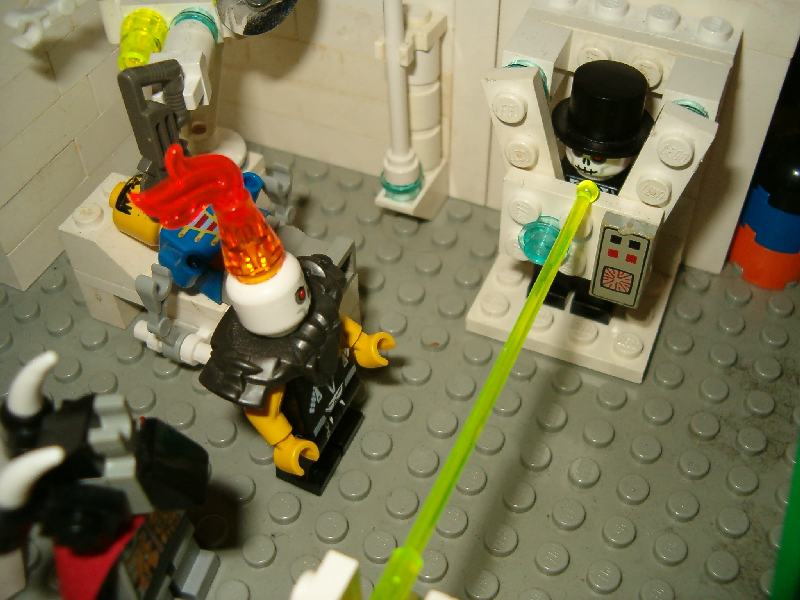 Warhead: "Indeed. The Immortal Empire could supply him with an endless number of sacrifices to swell his ranks.
Ah, what masterpiece of teknology! We gave it to the peaches, too. Just because we can." 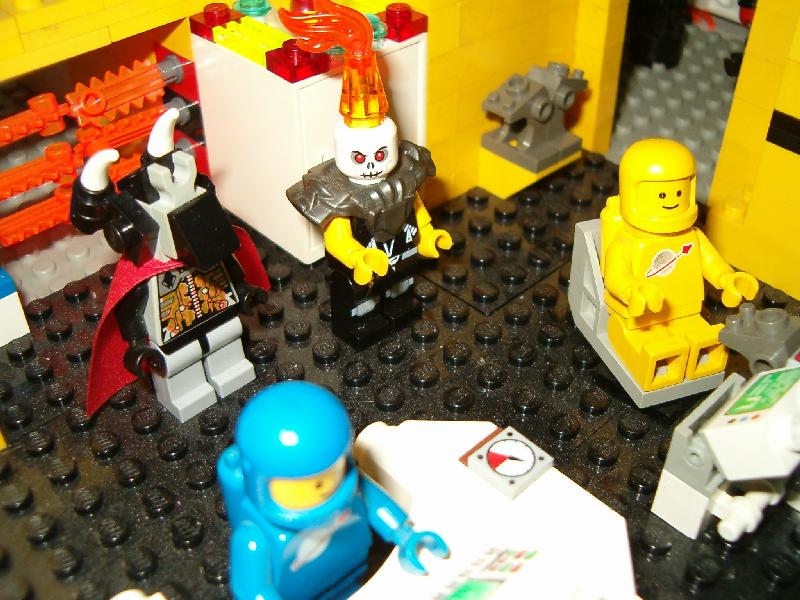 Warhead: "Commander, drop Apollyon at the coordinates he will give to you. After that make sure the computer core is delivered." 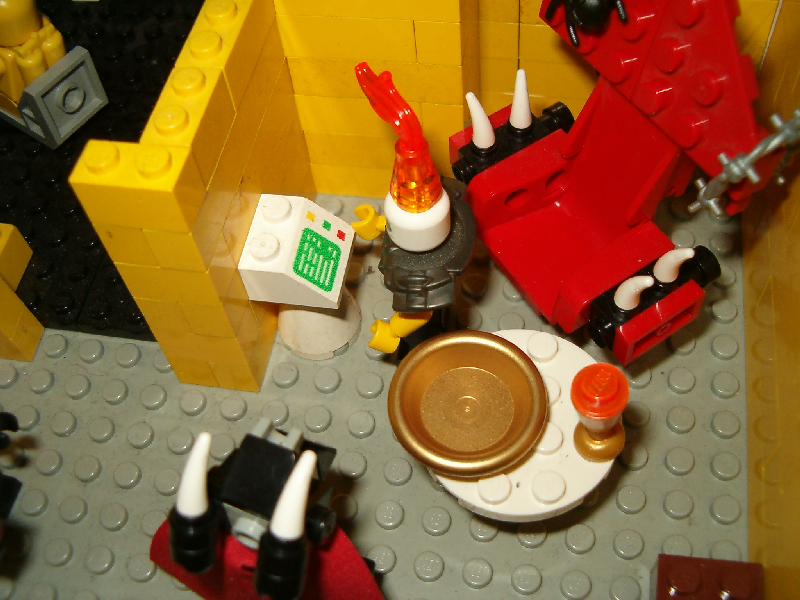 Warhead: "You cannot possibly imagine at what lenghts i had to go to retrieve this computer core or what would happen if it got into the wrong hands. And then you come along and try to raid the ship." 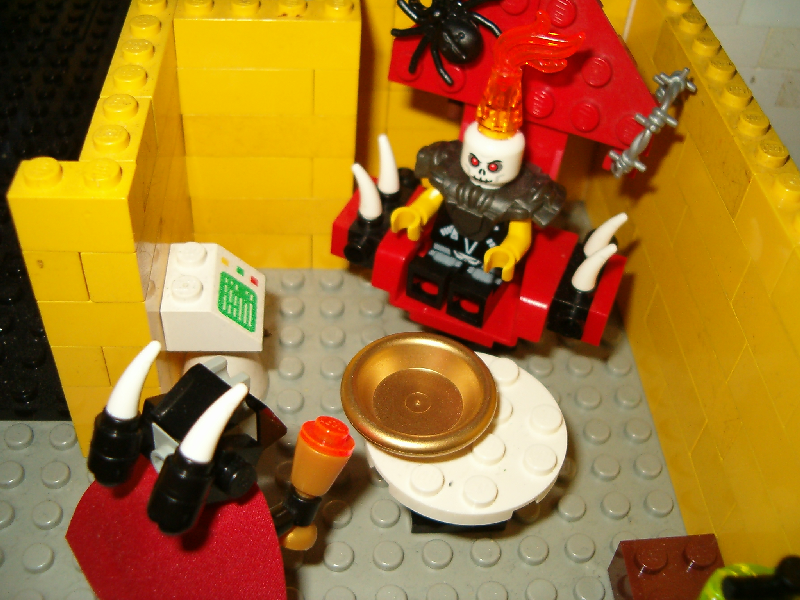 Apollyon: "That was just a matter of koincidence. You do know that the Briktopian Empire will not tolerate any Immortal agression towards its territory... not to speak of your blasphemous support of peaches! Next time we meet it shall be on the opposites of the battlefield again." 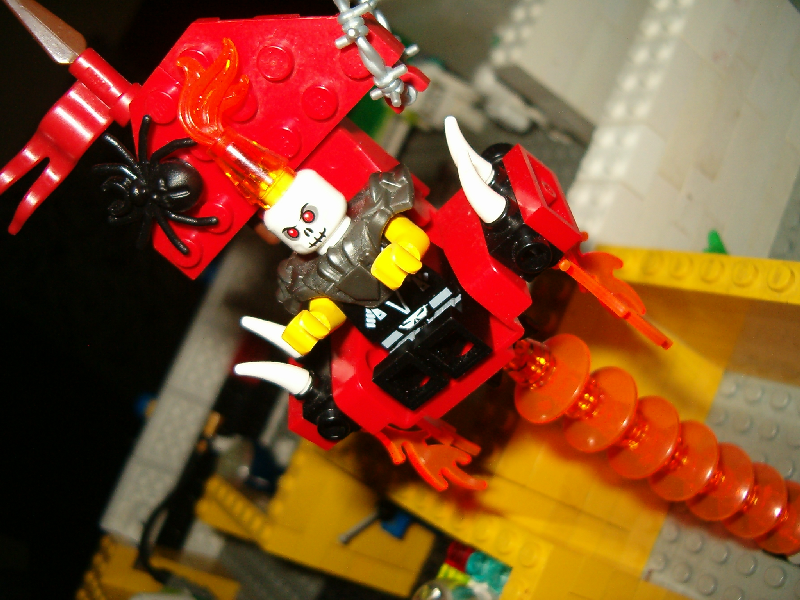 Warhead: "Well met Apollyon. But i have other matters to attend to now... on Fico. MUAHAHHAHAHAAA!"
Apollyon: "Godspeed! Warhead.
Last edited by Apollyon on Wed Aug 08, 2012 8:58 pm, edited 1 time in total.
If you're not into Metal you are not my friend!
Top

Ah, finally. It is done. Now where is a battle that i can join? I want to play and see someone else do all the hard work. 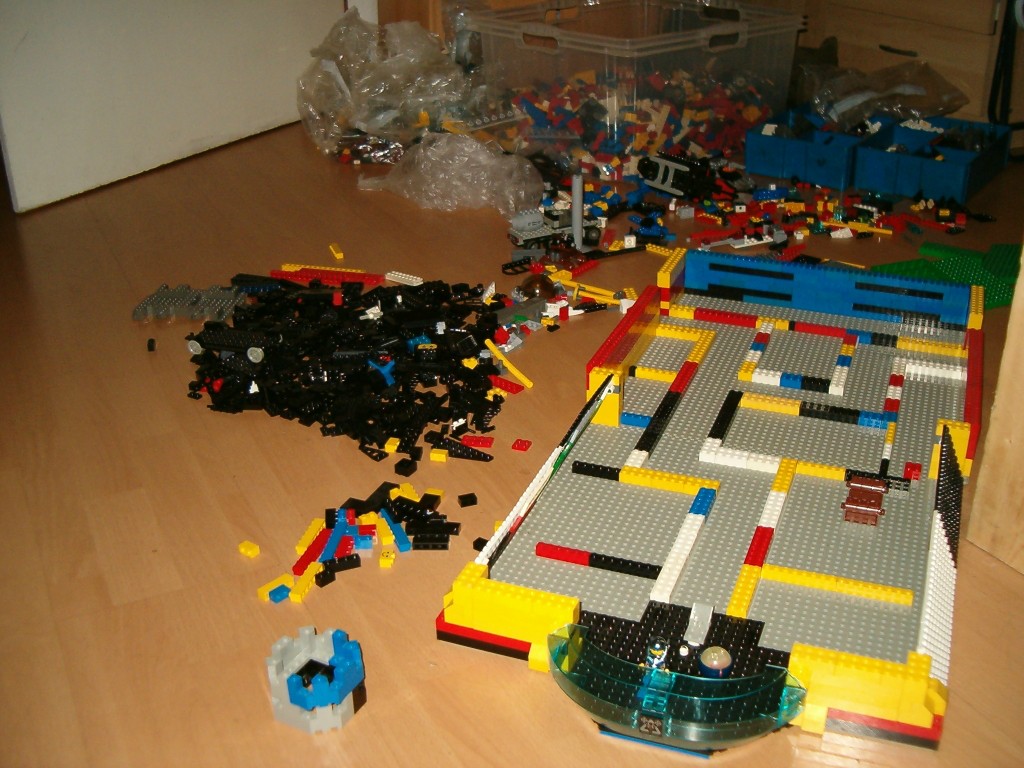 I did show this pic on the chat some months ago and it reminds me of how much time it took to build the Hyperion. Add to that the time it took to play this battle... I can vividly imagine what Warhead is going through right now building Fico.
Last edited by Apollyon on Wed Aug 08, 2012 9:02 pm, edited 1 time in total.
If you're not into Metal you are not my friend!
Top

It has been a privilege and an inspiration watching this unfold, I really want to build a vast ship interior using all my baseplates after the Fall Of Fico.

It was a shame the enemy ran out of reinforcements but I'm glad my so called tactics paid off so well, the corridor of death shall be remembered.

My brute
"Having enough Dakka is an illusion created by those too weak to stomach true warfare."
"A river of blood begins with a single drop."
Top

Told you it was a trap.

Ah, yes... Very good, you have kept our bargain and a deal is a deal., besides the prisoner will make for fine sport.

Expect your supplies of Maniac Beer to start arriving before your return to your home world, I have taken the liberty of sending word ahead. To prevent any Immortal entanglements (see: Invassion by drink crazed Rouge Maniac Horde) I would suggest you do not attempt to export more than 2% of the consignments shipped to you. 2% is ample in today's economic climate to help fund a new arms expansion or invasion fleet... have I shown you our ebrochure of accredited and tested weapons of mass and lesser destruction? http://www.brikwars.com/forums/viewtopi ... 81&start=0

Appolyon, please add this to the Immortal War page of the Wiki, cheers!

Re: Boarding the Hyperion - turn 6

Wait didn't I win too? I got the computer core .
My brute
"Having enough Dakka is an illusion created by those too weak to stomach true warfare."
"A river of blood begins with a single drop."
Top

Apollyon wrote:Objective: Retrieve the magnetive tape containing data from the Strazzel IX campaign from the tactical computer in Astrogation. 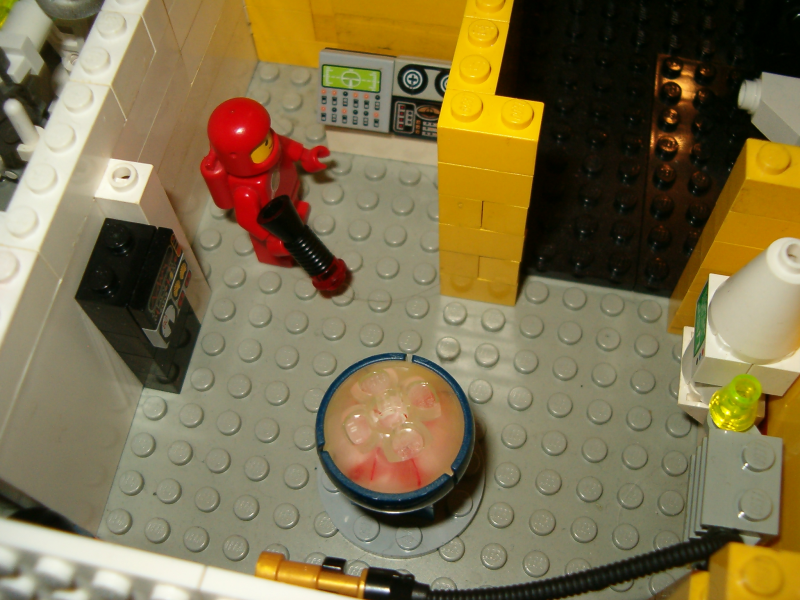 Your hero survived because of Warhead's successful heroic feat to join him (yes, i did roll for that. if that roll had failed the end of the battle and the storyline would have been very different). Also you did not kill and humiliate all other factions, which is the standard secondary objective naturally. So technically you survived - but you were far from winning. I hope you had fun anyway.

Yeah, but me and my crew were just minding our own business until this lot attacked. So, I've had a broom inserted into the pirate prisoner, he can walk about and sweep up the dead as he goes.

Warhead wrote: I've had a broom inserted into the pirate prisoner

My brute
"Having enough Dakka is an illusion created by those too weak to stomach true warfare."
"A river of blood begins with a single drop."
Top

Well, damn! That didn't go well, I guess I'll need more Pirates. Who knew the broom was supposed to go lengthwise and not sideways.

Warhead wrote:Well, damn! That didn't go well, I guess I'll need more Pirates. Who knew the broom was supposed to go lengthwise and not sideways.

My brute
"Having enough Dakka is an illusion created by those too weak to stomach true warfare."
"A river of blood begins with a single drop."
Top
Post Reply
21 posts