Okay, this is it. The final part of Piltogg's quest to obtain the Head Separator is here.


And so, Piltogg's fleet which slipped into Assyrian space while the rest of the fleet was distracted at the space battle along the ASE/CSR border has arrived in the Aratus system. The second planet is a small Assyrian colony. Akkadian spies were able to discover that this small world is where the mighty Head Separator is stored. The Assyrians chose this world to hold the Artifakt because its small and unassuming nature would not rouse suspicion that they were hiding something there, but the Akkadians learned of its whereabouts and are now assaulting the planet. The Head Separator is housed inside an ASE defense wall gate complex for a massive wall that surrounds one of the cities on Aratus II. 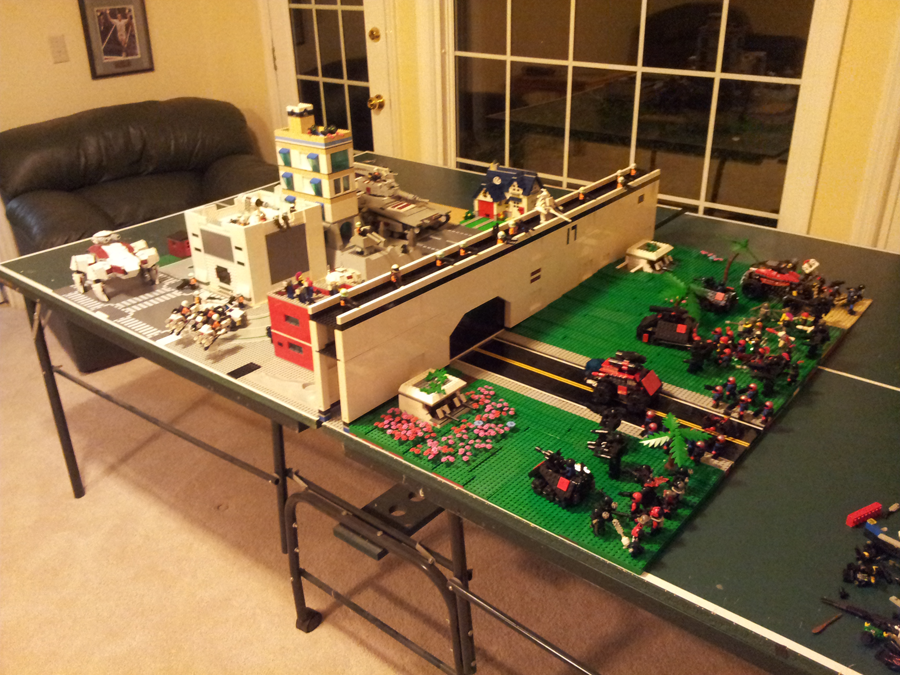 The battlefield takes up almost half of the ping pong table. I ask that you only use land with baseplates for the battlefield. 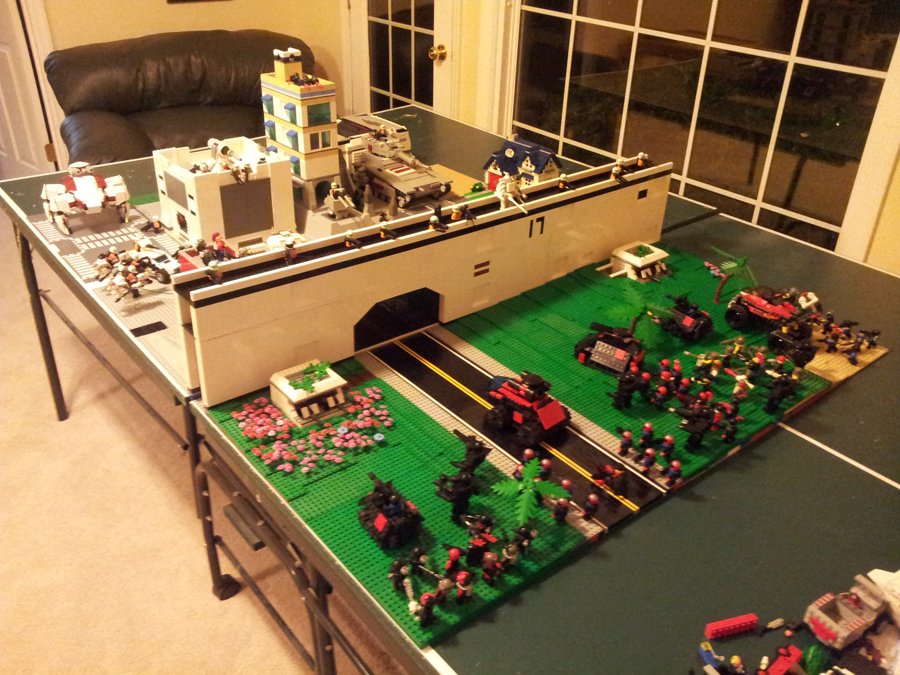 The Akkadian approach. They're coming at the city from the outside. Let's take a look at everyone present. 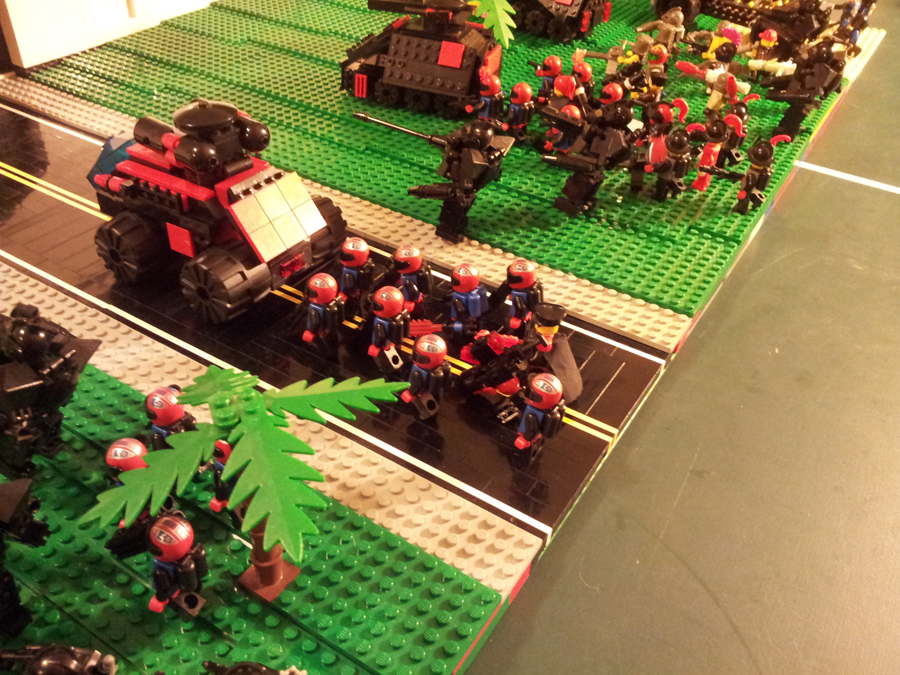 The main Akkadian group travels up the main road. You can see Piltogg in the back there. These are just general Akkadian soldiers behind their main attack vehicle. 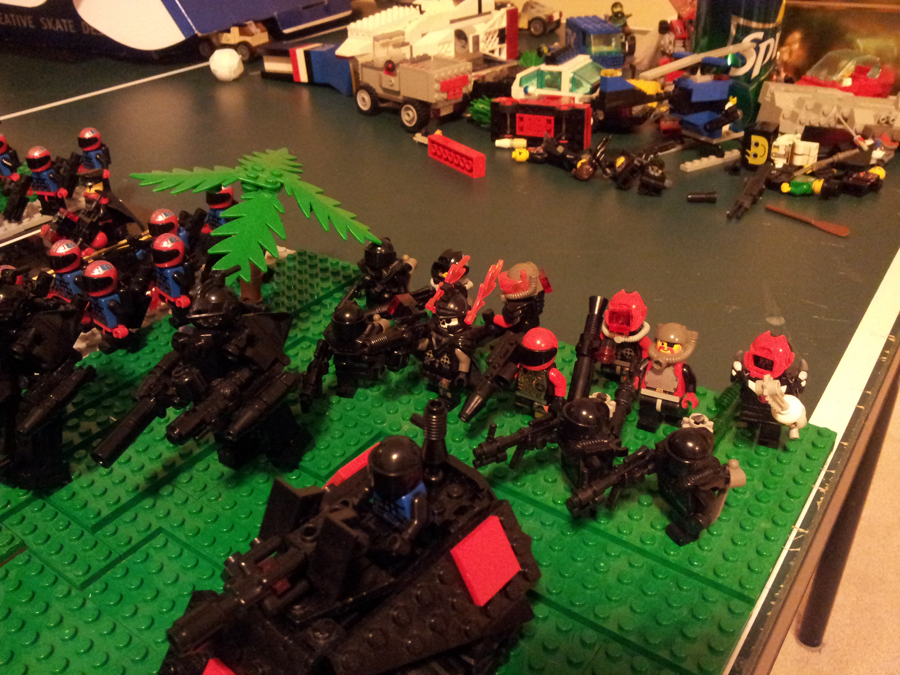 Right next to them is Warhead and the Immortals. The six Black Knights are spread out across the whole field. The Akkadians stole these from the Czechs during Phase 1 of their attack. 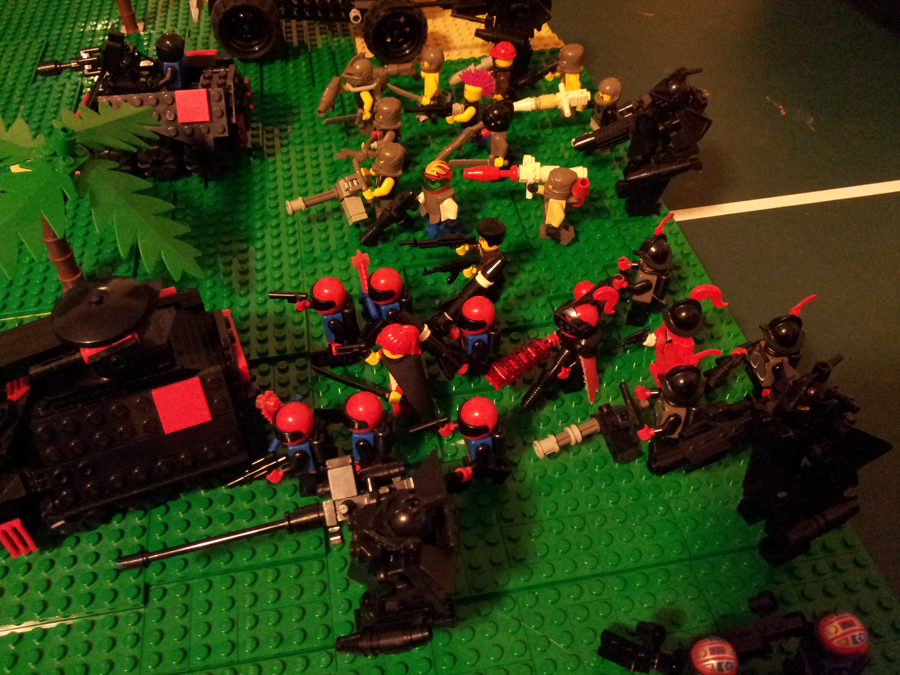 On Piltogg's other side is another squad of his men lead by Vas Kallas. It's hard to see what is going on, but this is a specialist squad. There is a sniper, a rocket launcher, two OTC people, and two men with small pistols and hand-scanners. 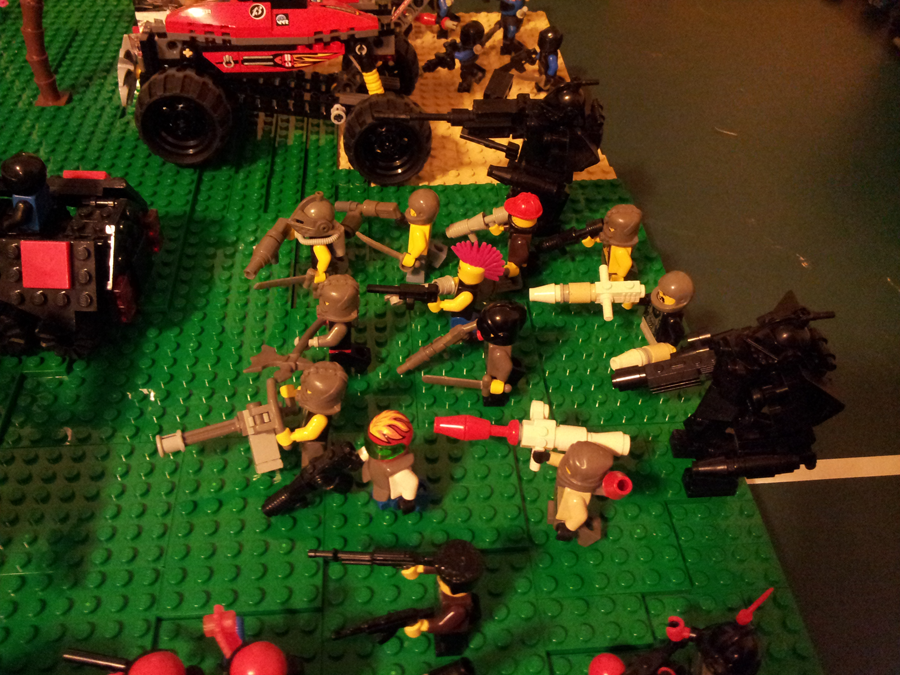 Next to them is the group of Akkadian fanatics. They are led by Freiderich who has the halberd. 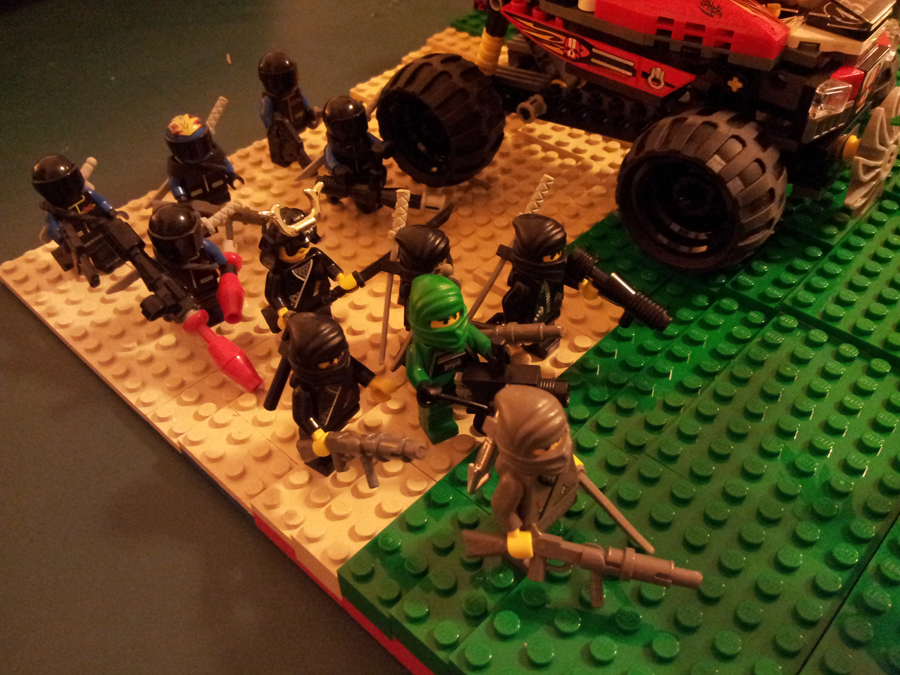 Then we have the Space Ninjas. These guys are always a pest to the ASE, siding with anyone who will attack them. 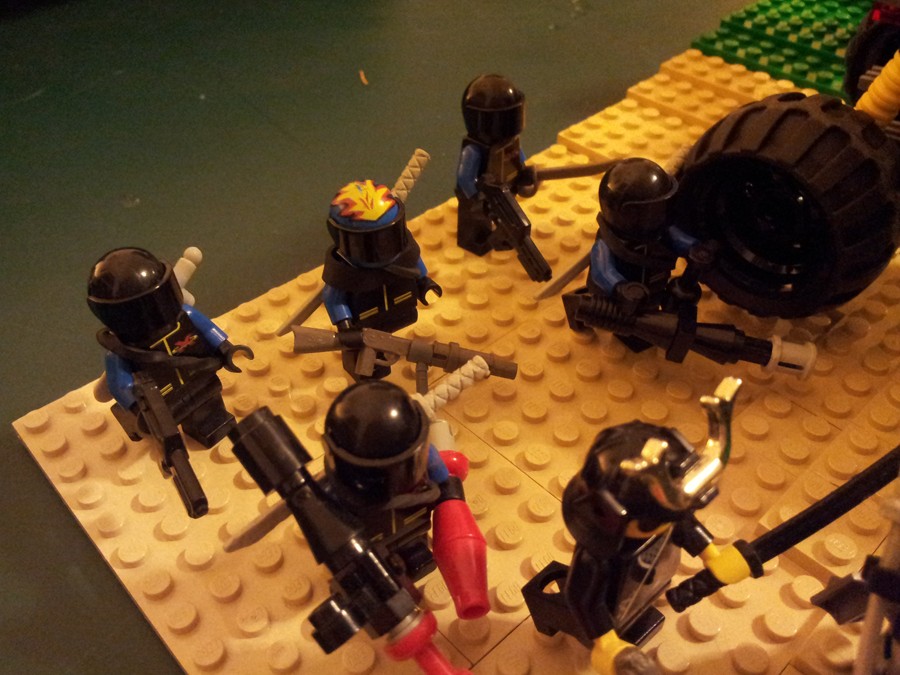 Behind those guys are the MAOX Death Korps led by Major Riker.

Now for the Assyrians... 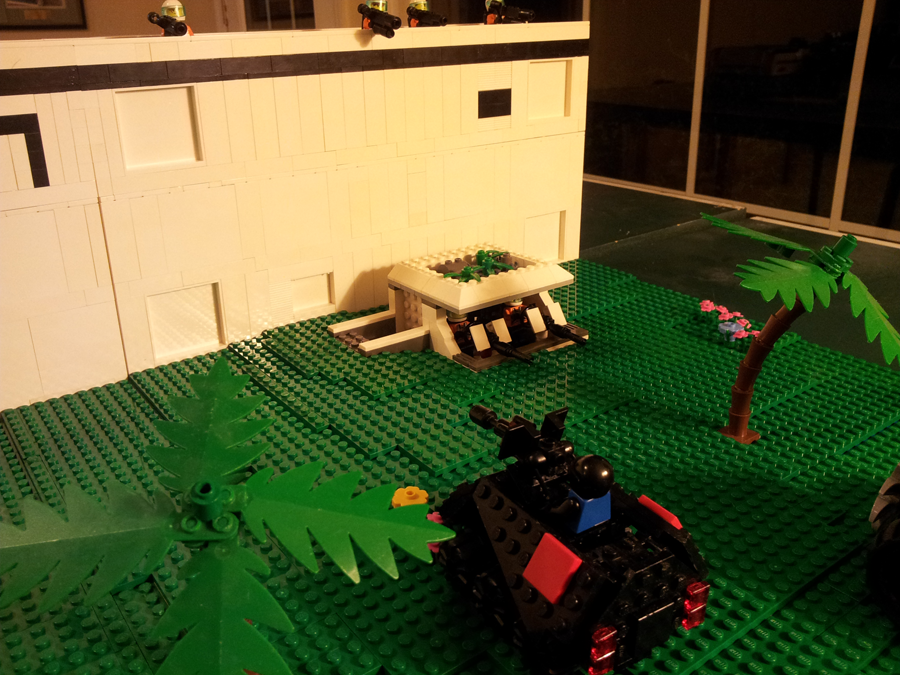 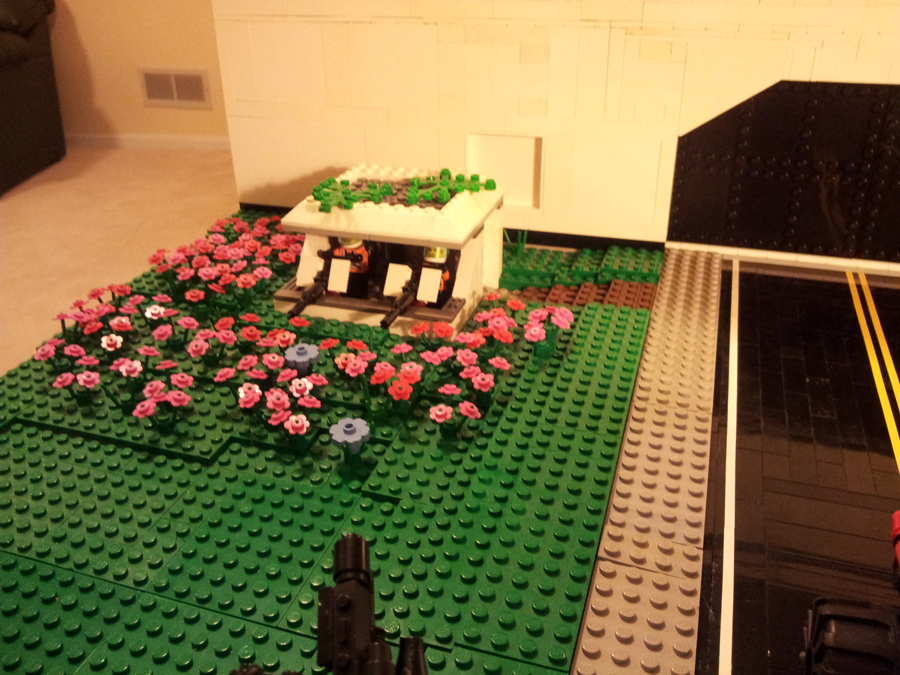 The Assyrians have two pill boxes outside the wall. They are already being manned. 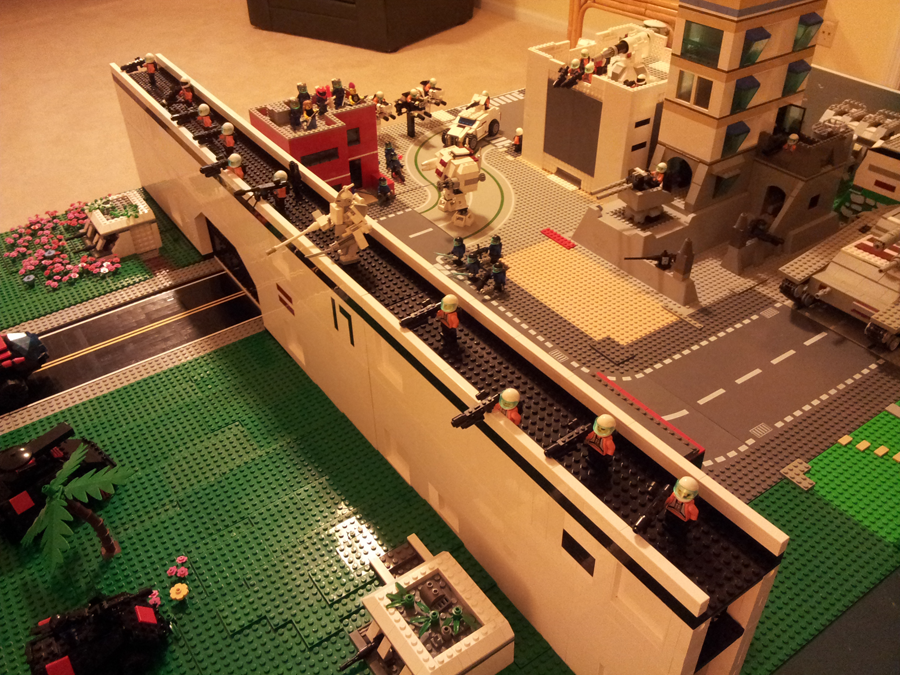 The wall itself has ten men on top along with their White Knight. 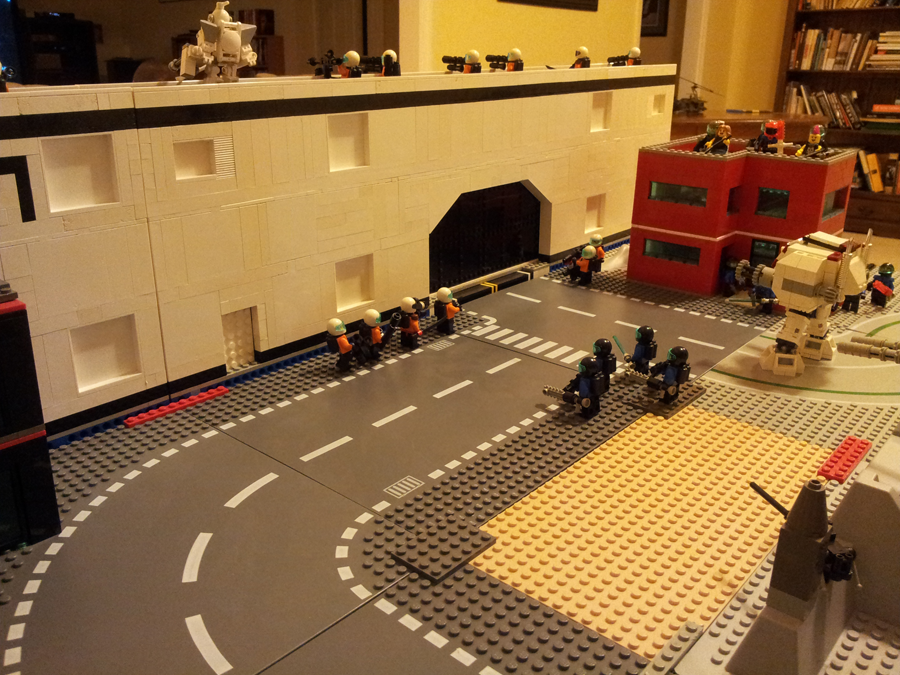 Behind the wall is a number of men waiting for the attack. The inset door to the left of the gate is where the gate controls are.

The Vanquisher Super Tank idles nearby. 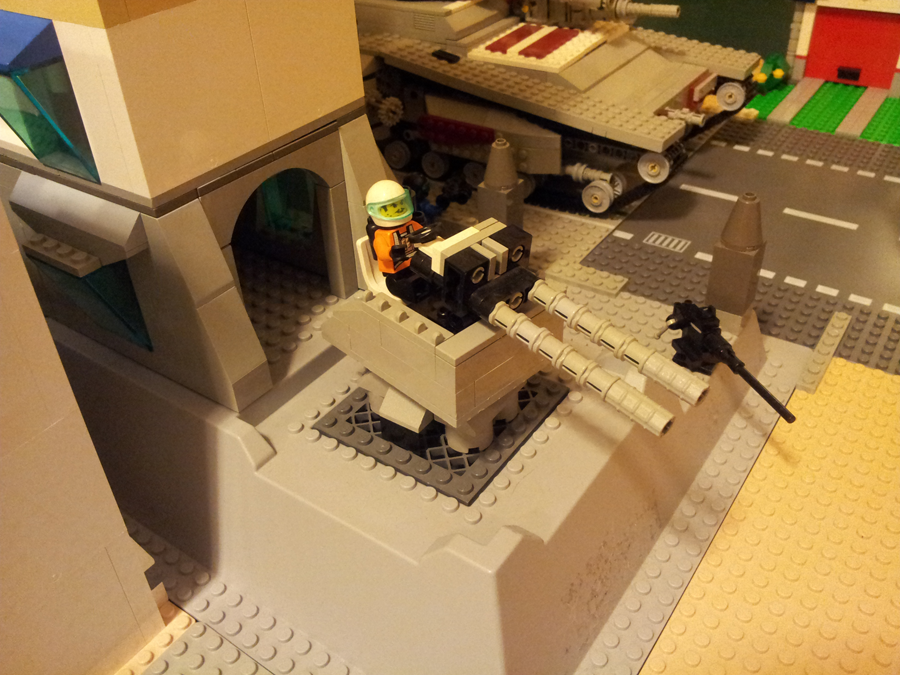 The tower has a huge gun turret out front. 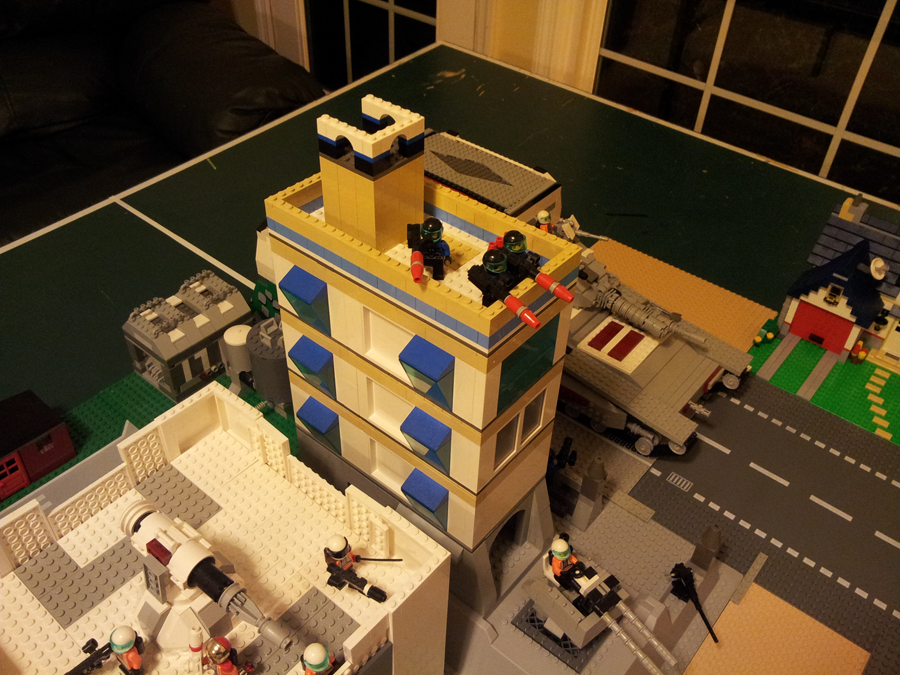 Major Natalya, Major Smith, and Regulus all start inside the tower. 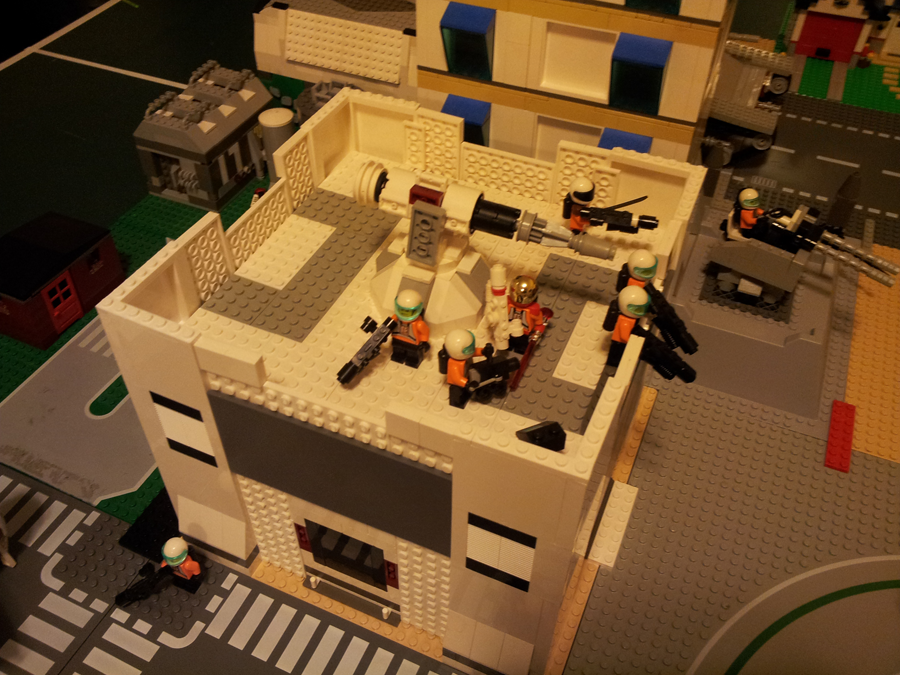 And next door to the tower is this large square building with a huge gun on top. 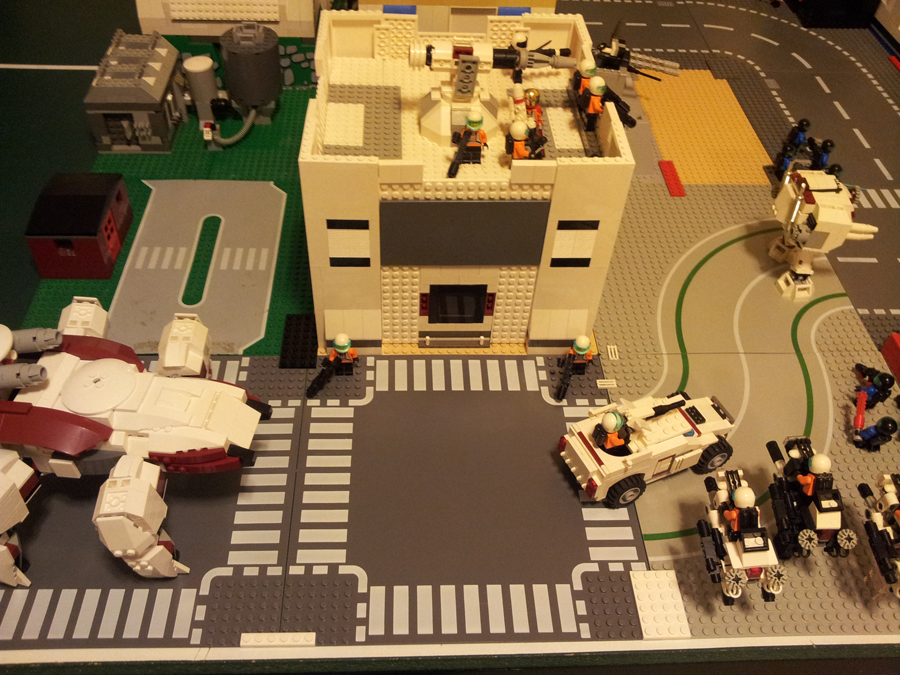 The door to it is here. This building holds the Head Separator. 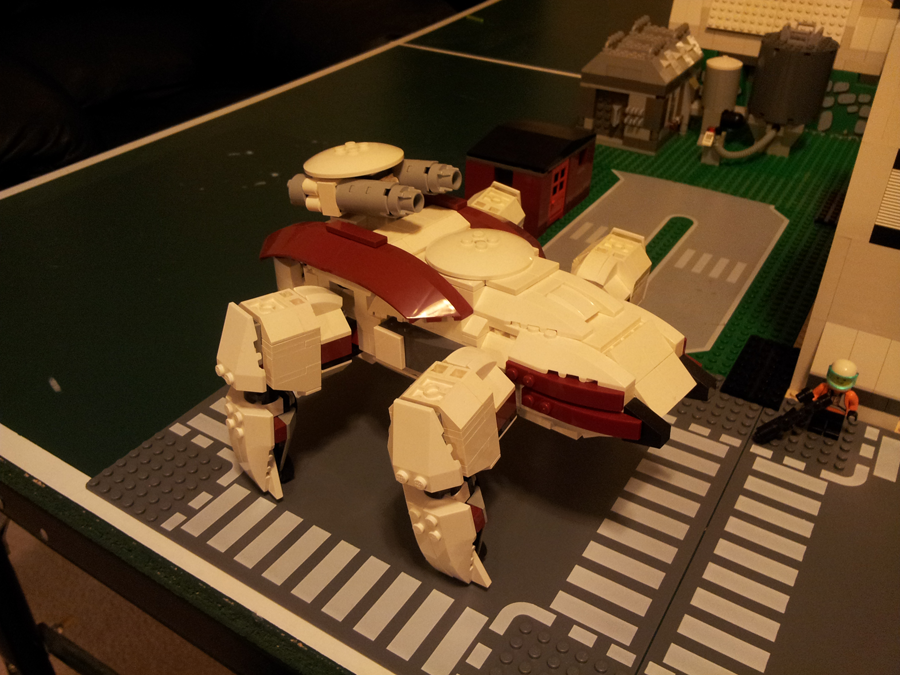 Outside an S-143 White Widow Spider Tank is ready for battle. 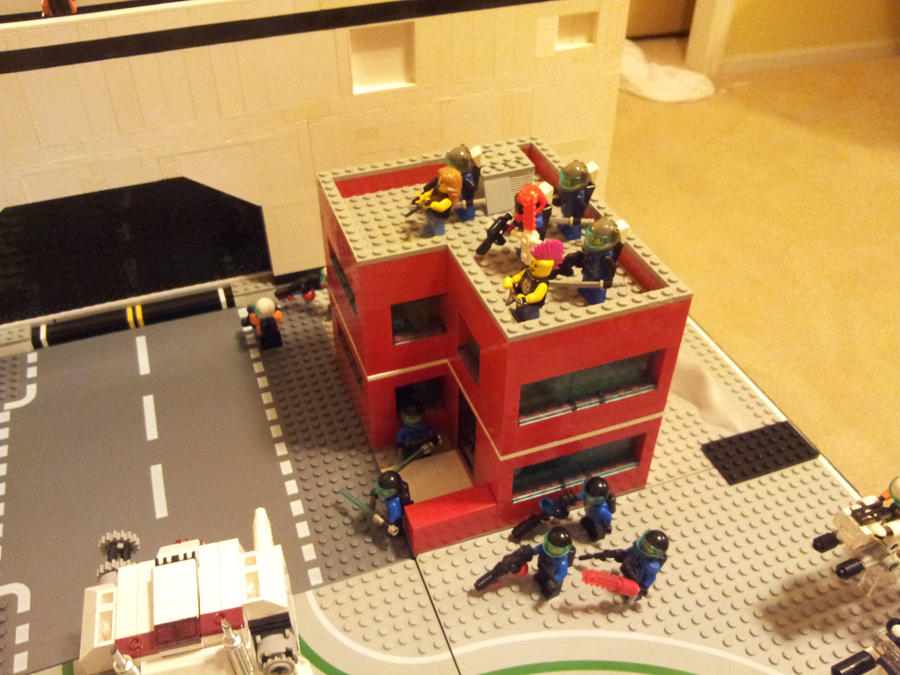 The last building is a brick house with some guitar players filling the air with the sounds of Metal. 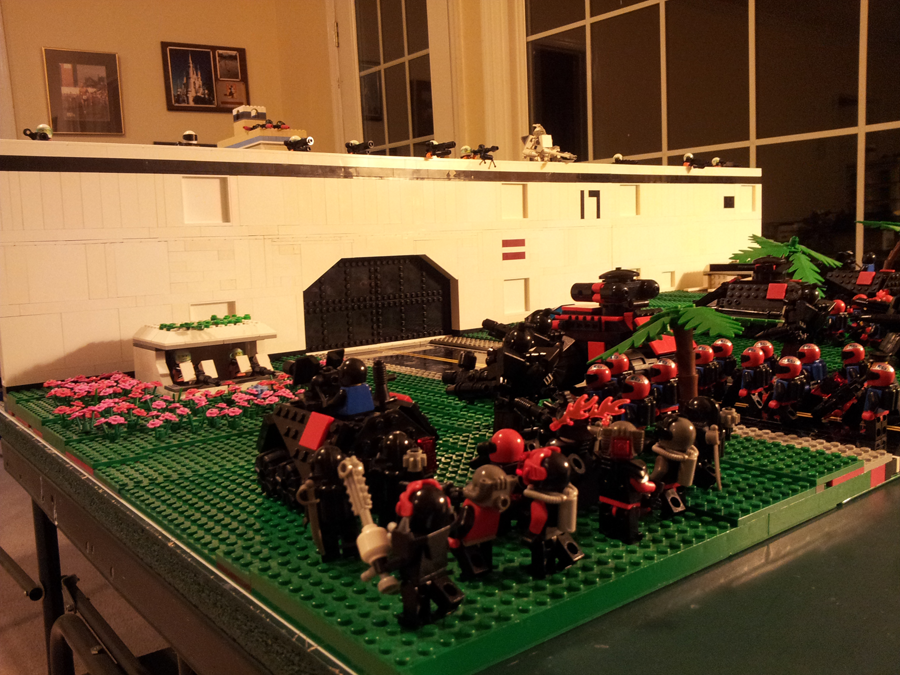 The Akkadians and their combined allied forçes prepare to strike. 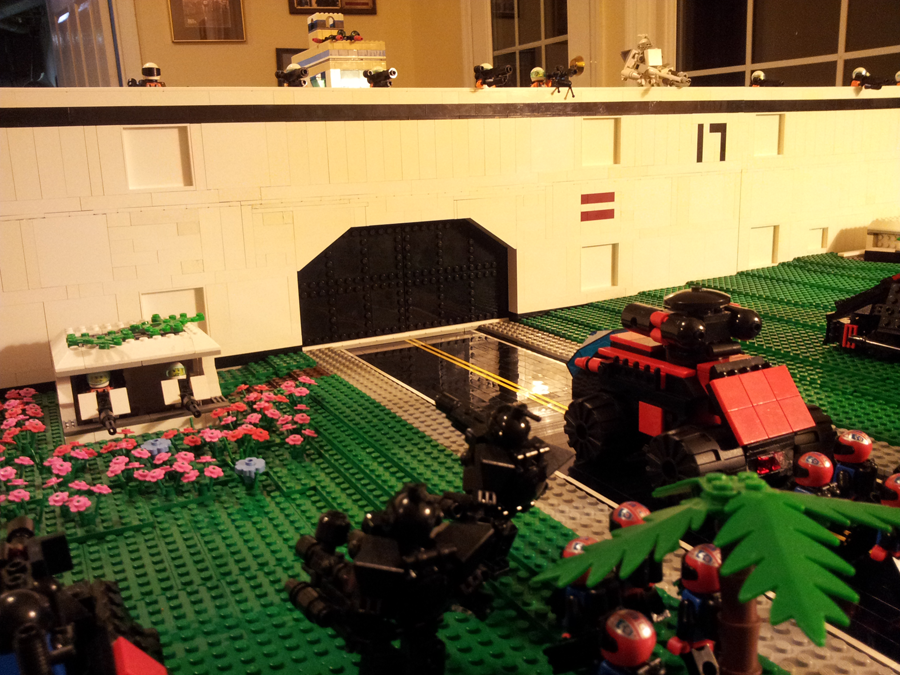 The wall however has been greatly improved. You can see that it is now taller and has a much more formidable door. The door is very close to 6 bricks thick now. The wall also increased in width to be 10 bricks wide. The wall's new strength prompted me to get more Akkadians and to build them that new vehicle with the huge laser turret on top. I'm also letting the Akkadian mob use the vehicle with the catapult. It could be used to climb up the wall or to throw someone over it.


@Piltogg:
You're attacking this place so you don't have to go with the way I set up your men. If you want to move their starting positions around before turn 1, let me know, but they must start at least 6" from the wall.


Sign up now. If you have a slot reserved for you but you don't want to play then please let me know so I can open it for anyone.
▲
▲ ▲

AT LAST! PREPARE FOR BADASS!!!

Lol okay. Note: No faction is hostile towards the Guitar Players at the start of the game. I mean you could choose to become hostile but I don't know why you would kill some people who are just trying to play some Metal.
▲
▲ ▲

I wanted the commandos! Oh well, can I have one of the reserved spots if their person doesn't show up?

I'd love a spot, if one is left.
An army marches on its stomach, and its favorite food is fudge.
Top

The hymn of this epic conflict will be sung throughout future generations...
My Armies: Knights of Aldasveign, Arcadian Federation, Calvarian Empire
My art thread
Top

If anyone doesn't take their reserved spot or something I'd love one.
That wall is amazing

Only 2 things are infinite the universe and human stupidity, and I'm not so sure about the former- Albert Einstien.
Top

If anyone drops out can I take there spot?