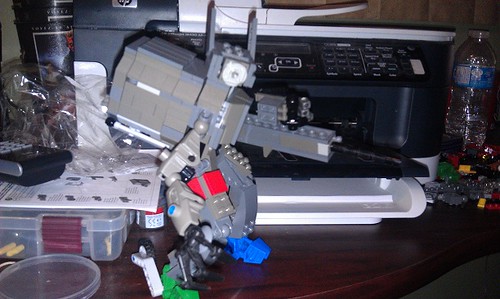 The Universal Union RP-11 Glasgow Humanoid Autonomous Armored Knight, or "Knightmare Frame".
The prototype and flagship unit was piloted by Matthew "Cadians" Bri, Emperor of the UU, during the landings on Straxis IV. The Red thigh markings denote a command unit. 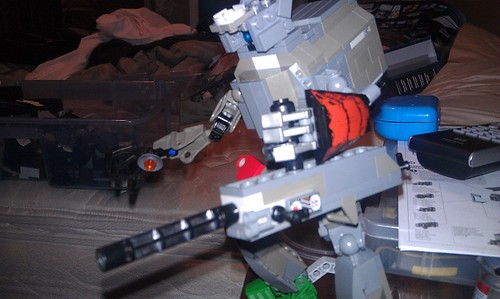 The Long Range, Anti-Armor 105mm Cannon. On the far arm is the prototype Radiant Wave Claw, which was proven very effective during the Daemonic Incursion on Straxis IV. 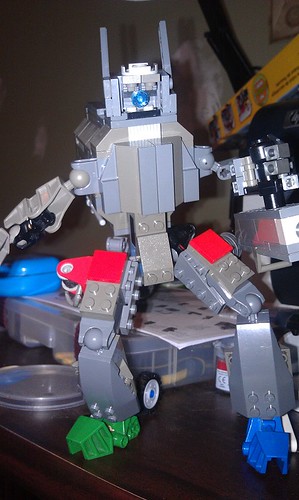 The armored face of the head flips up to reveal a small sensor suite that allows for better battlefield knowledge, including Thermal vision, target marking and tracking, and magnification. The dual aerials on the head allow for constant communication with it's fellow frames and infantry forces. 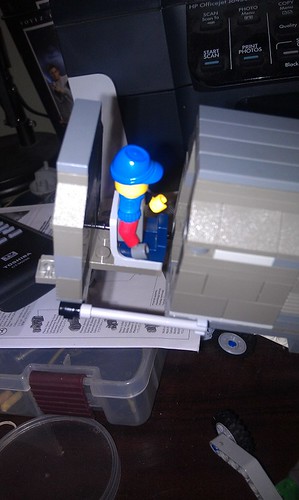 The seat slides out, allowing for easy entrance/exit of the cockpit and maintenance to the Cockpit block. 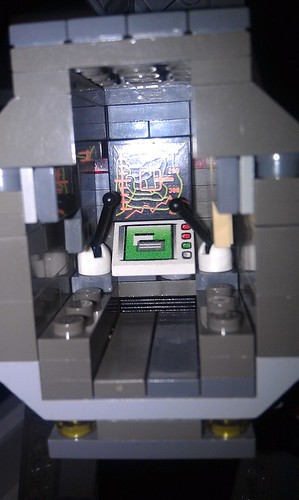 A shot of inside the cockpit. This is one of a few areas that needs work, as i need better 2x2 flat "Screen" parts. 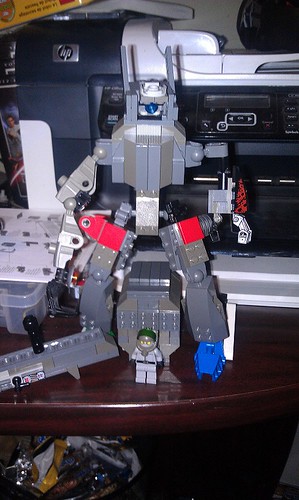 A test pilot in front of the mech, with the cockpit block behind him. In case the mech is knocked out, the block can eject the pilot to safety. You can also see the large size of the mech here. On the right hip is a zipline, to help with climbing, and on the other hip is a "grenade" of sorts that the frame can throw out to deploy a small minefield.


And yes, i have to empty my trash can.

In before condemnation of ball joints.

Does the cockpit sticking out so far interfere with balance?
An army marches on its stomach, and its favorite food is fudge.
Top

Does the cockpit sticking out so far interfere with balance?

Too late, Natayla blasted me on steam for it.


And no, not really. It's pretty poseable, but if i shift too much weight to the back, it falls over on me.

You glorious bastard.
This sig is too fucking large: show anyway

This has made me want to rewatch Code Geass... again.

A very nice design, the only things you could still do that I can see is use a larger disc for the eye (or perhaps 2, a black one over an orange one to make it look more authentic?) and beef up the shoulders a little by maybe using longer bricks. Some more tiles on the thighs, matching colour feet could also help to further perfect this design, as it's one of the better Lego Knightmares I've seen so far. I was working on a more realistically sized Gekka a while back and building a hatch that works and keeps the mech balanced isn't easy.
Fantasy battles - Scifi battles

Ball joints. Also, you could improve your photography with a neutral background, more lighting, and no flash.

My camera (i took these with a cellphone) and neutral background are broken. I just wanted to get this up to show MGB.


When i build more, the photography will improve.

I actually think this is pretty rad. I'd been considering something like it my self.

Pretty cool mecha, the head reminds me of Shockwave. Also, that giant block with the pilot sitting in it seems like more of a weakness than a bonus.

Robot Monkey wrote:Pretty cool mecha, the head reminds me of Shockwave. Also, that giant block with the pilot sitting in it seems like more of a weakness than a bonus.


Those are later frames, but the concept is the same. The Pilot block allows ejection, also, it's cool.

Why all the hate for ball joints? Almost all of my mechs use them. Personally I detest the exo-force style click joints.
Top

They're a little too slippery, and won't stand up to much weight without employing things like natalya's paper trick.

Keldoclock wrote:They're a little too slippery, and won't stand up to much weight without employing things like natalya's paper trick.

I'm using them without papertrick, (except in these pictures, the black hip bit has it, but no longer, i found an uncracked replacement bit). The other hinges wouldn't hold up the weight of the rear cockpit.

I've already started making the UURP-12, which will feature a larger chest that balances out the front(complete with chest machinegun like the Glouscters have).