After the PLE allied with the Galacian Republic, a special division was based in the Leaf Galaxy known as The Cyan Order. The Cyan Order is a side branch of the Galacian Republic who embrace a more honourable and chivalrous path. They make use of BT, a substance very common and powerful in the Leaf Galaxy. The Cyan Order usually deal with terrorists and thugs. They are not to be underestimated though, as they have been responsible for taking down entire communists governments and organizations. 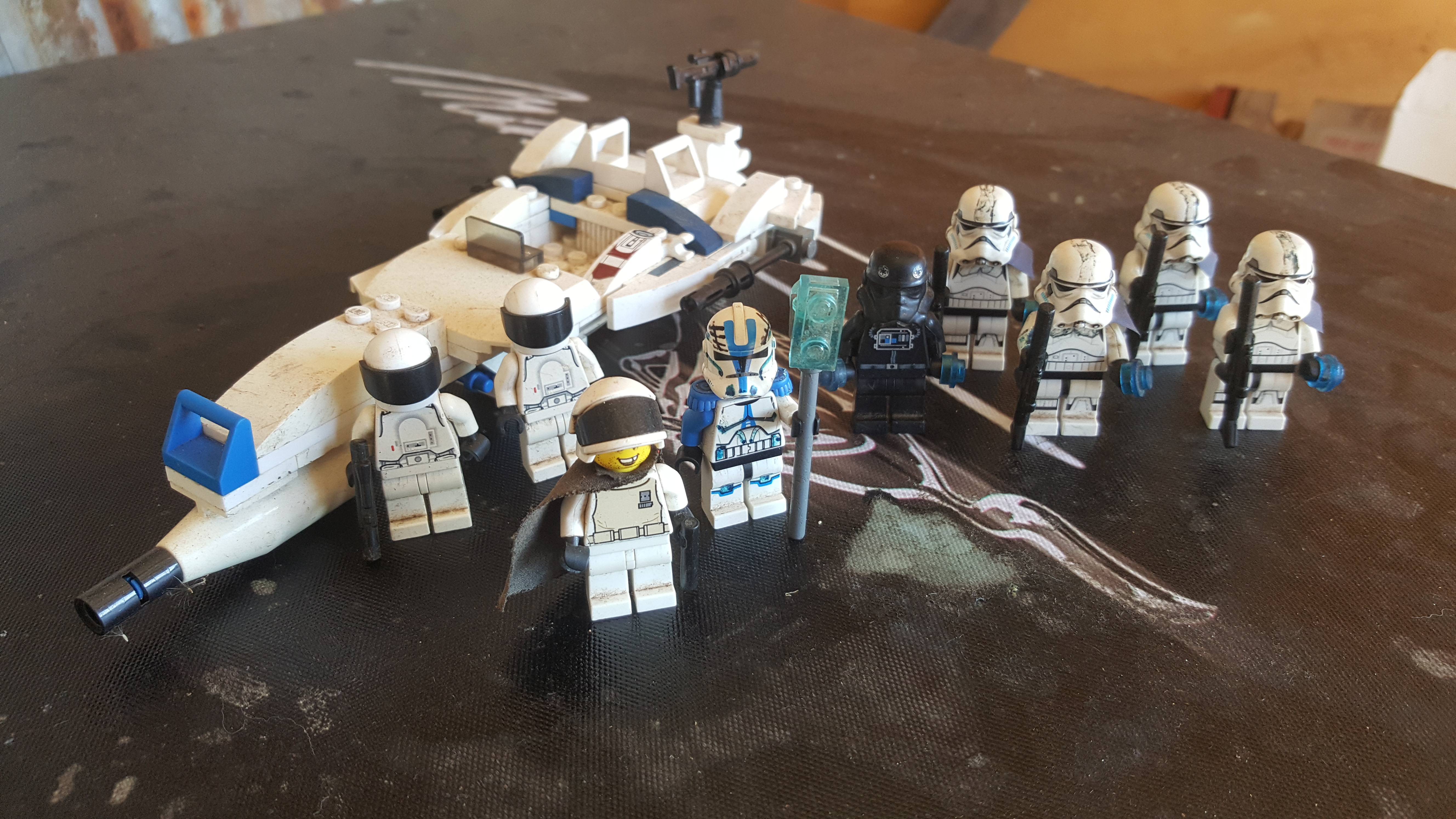 Lord Mark, head of the Cyan Order. Lord Mark, or Lord M, is the Military commander of Galacia in the Leaf Galaxy. He is noble and just(to some extant) and wields a mighty grav-hammer. Many have been turned into jam at the might of his hammer. 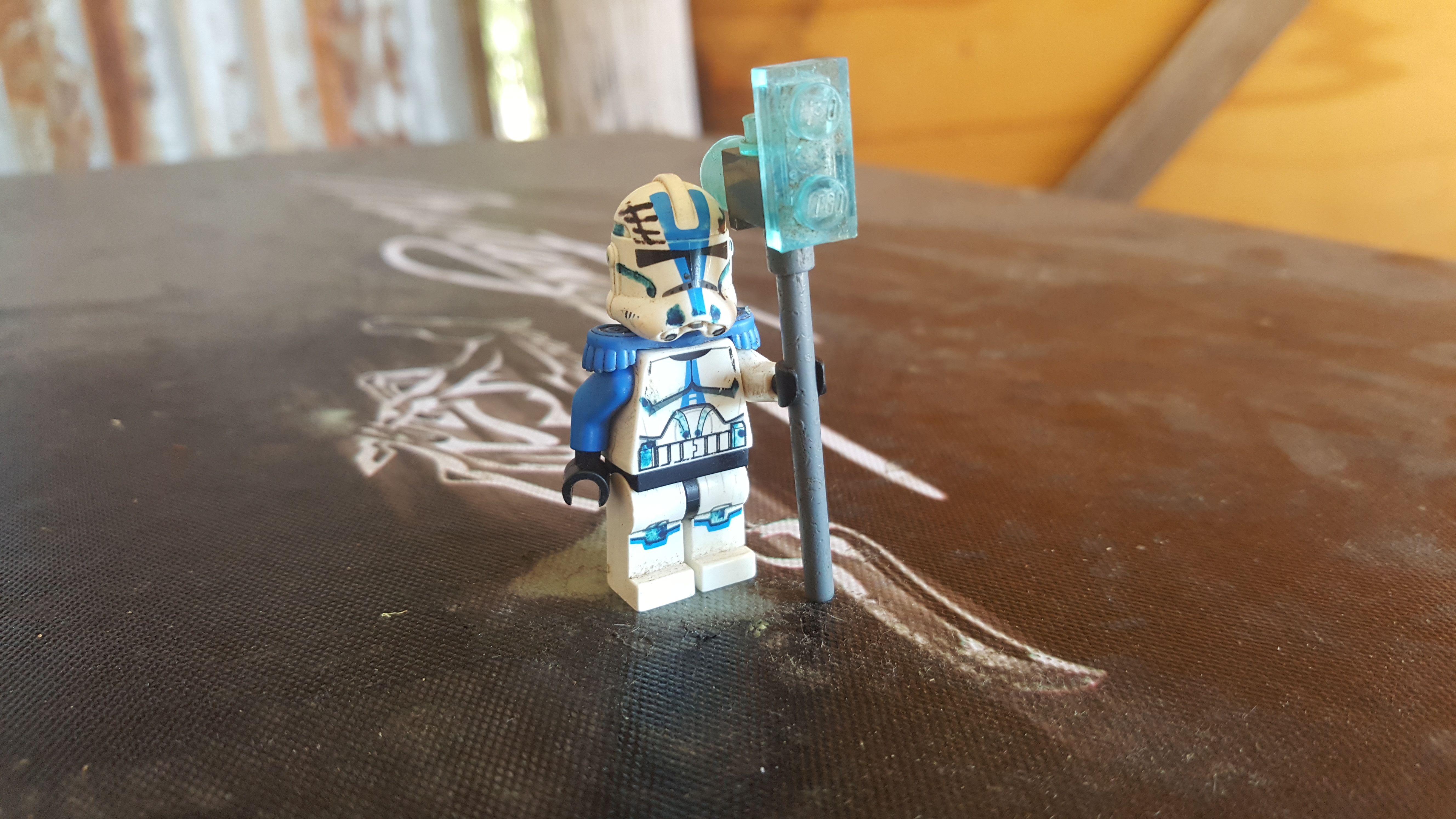 The White Knights are the warriors of the Cyan Order. They are trained from a young age and grow up to become brave, strong, honourable and just. Each White Knight has his own squire, who is taught all that his master knows to become a white knight himself one day when he comes of age. White Knights are armed with tactical rifles and BT gloves, a technology the PLE has perfected. It is disputed whether the gloves are of magic or technological origin, but what is known is that they are deadly weapons. They can morph into deadly swords, or high powered shields to deflect enemy lazer fire. 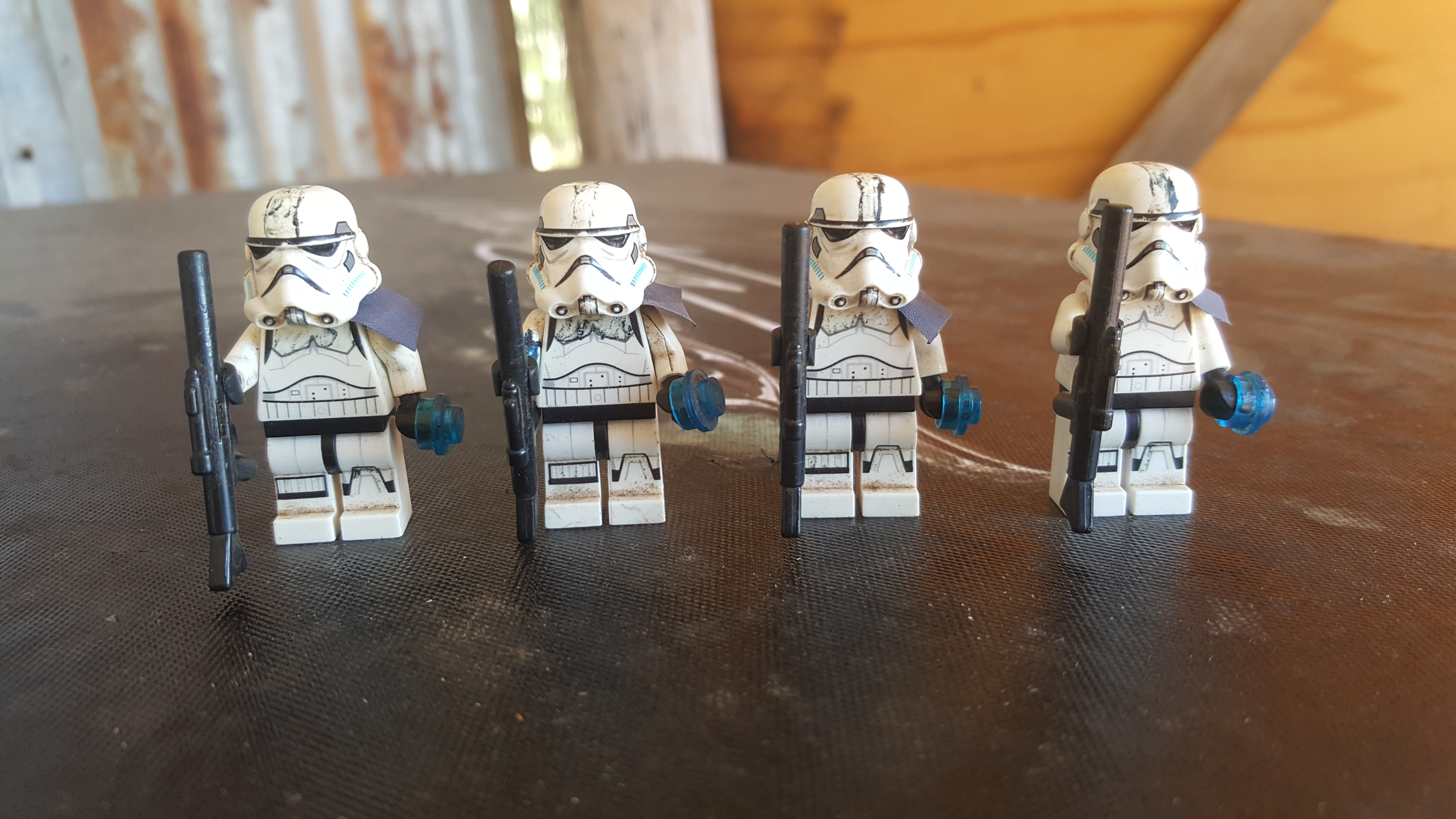 Dark Knights are the highest rank for a Knight to achieve, and only a chosen few reach this level. Often used for covert or one man missions, Dark Knights are stealth specialists and are never seen with another Dark Knight. You will often see them leading White Knights into battle though due to low number of Knights that join the Order. They refuse to wield any gun or bow in battle, and prefer BT gloves or other forms of advanced melee weapons. 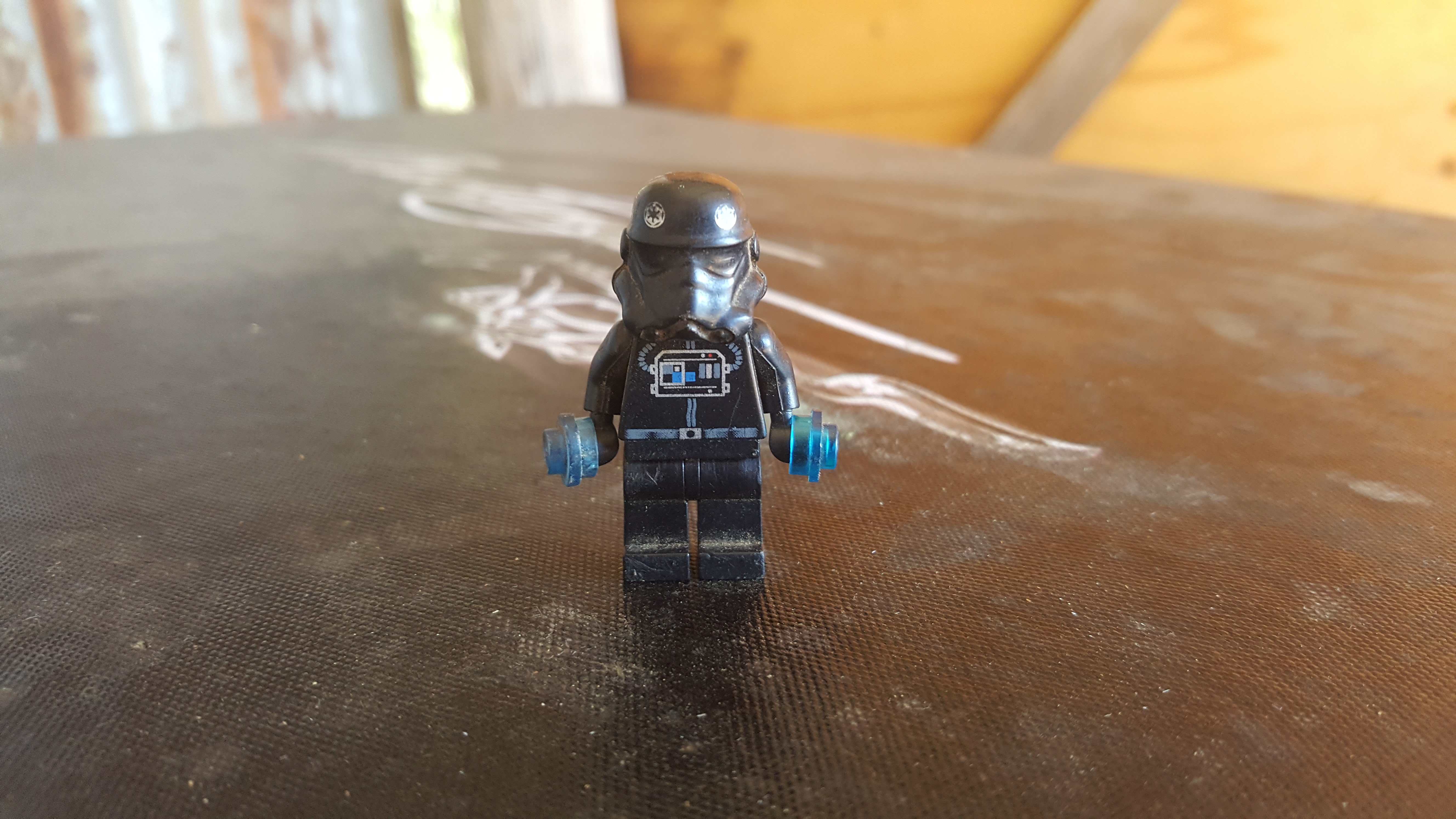 The Galacian Republic still has a political presence in the Leaf Galaxy though. The GR Representative for the Leaf Galaxy is Mr. Arch. Mr Arch does not look the brightest, but that should not let you alter your opinion on his intelligence. He is often quite brutal, but wants the best possible outcome for both the PLE and GR when it comes to trade agreements between the two empires. He is also deadly with a Glock.

Here he is with two Galacian Troopers. Flanked by a speeder. 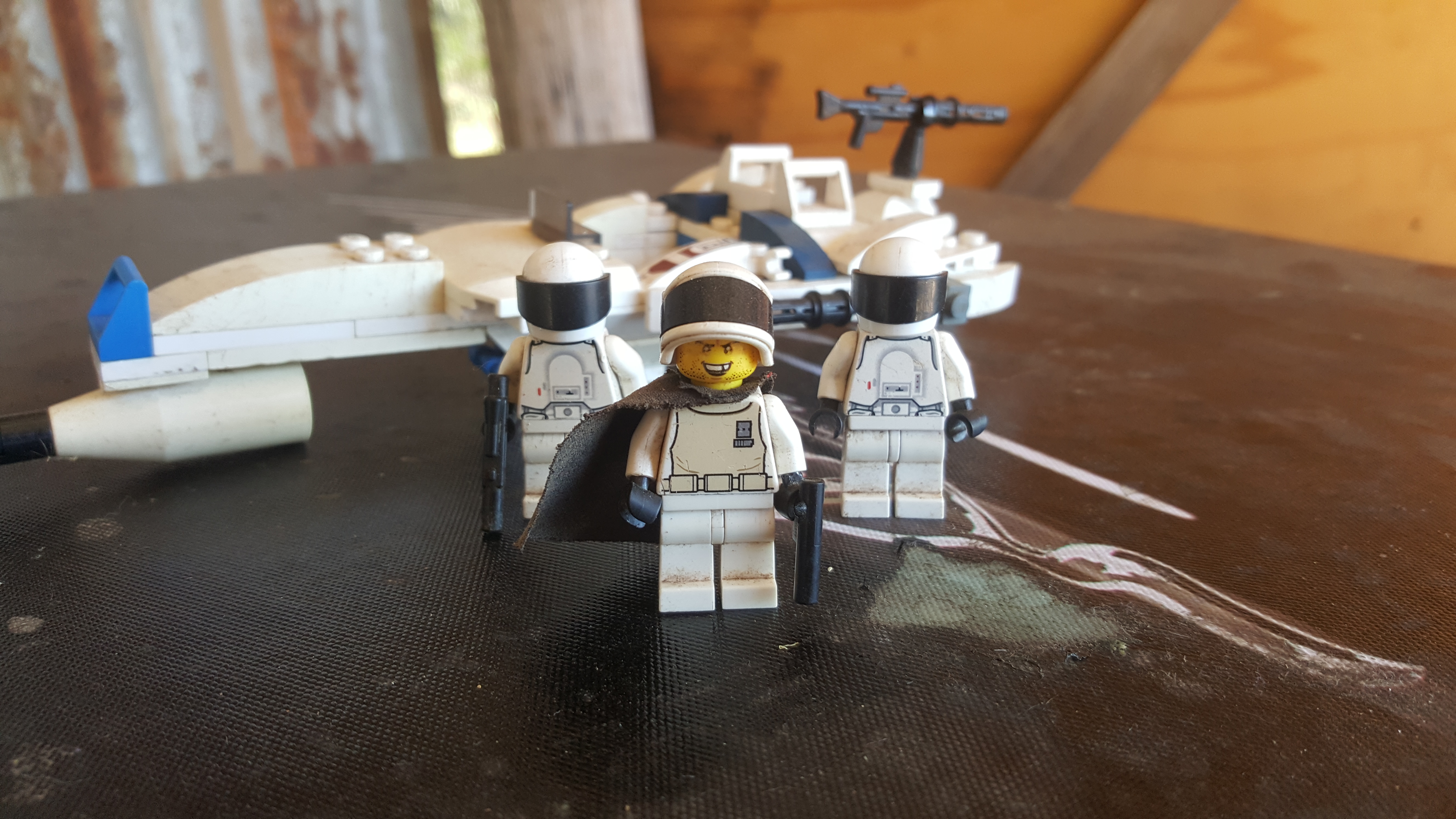 The "Ambassador" speeder. The Ambassador is an all terrain vehicle primarily designed for taking dignitaries and important officials over harsh terrain. They are used by The Cyan Order on the battlefield from time to time. They are fast and agile with strong front armour and armed with one blaster on each side and a heavy blaster on the nose tip. It also has a bipod for a Galacian heavy rifle. 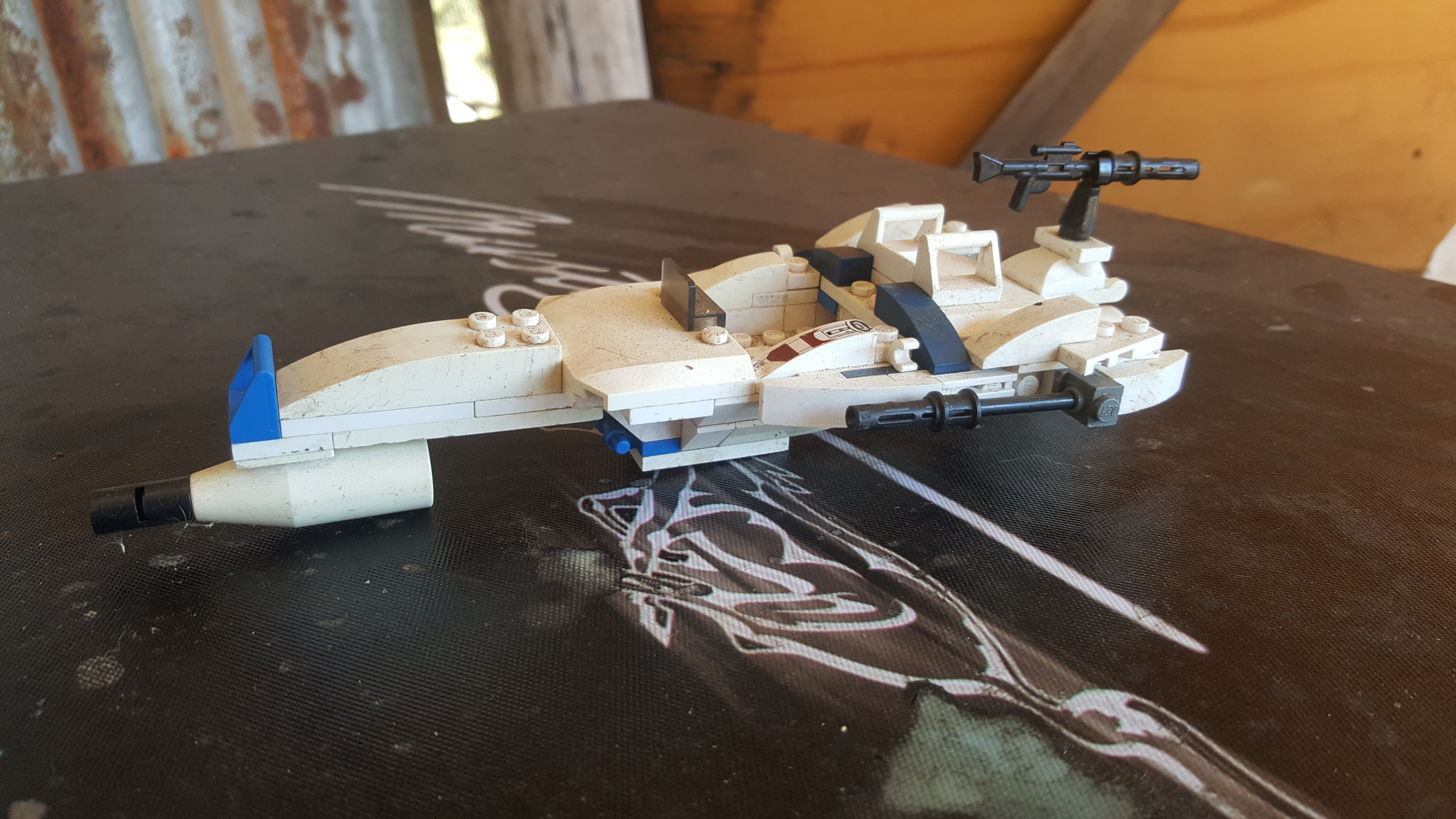 The ambassador with passenger, pilot and gunner. 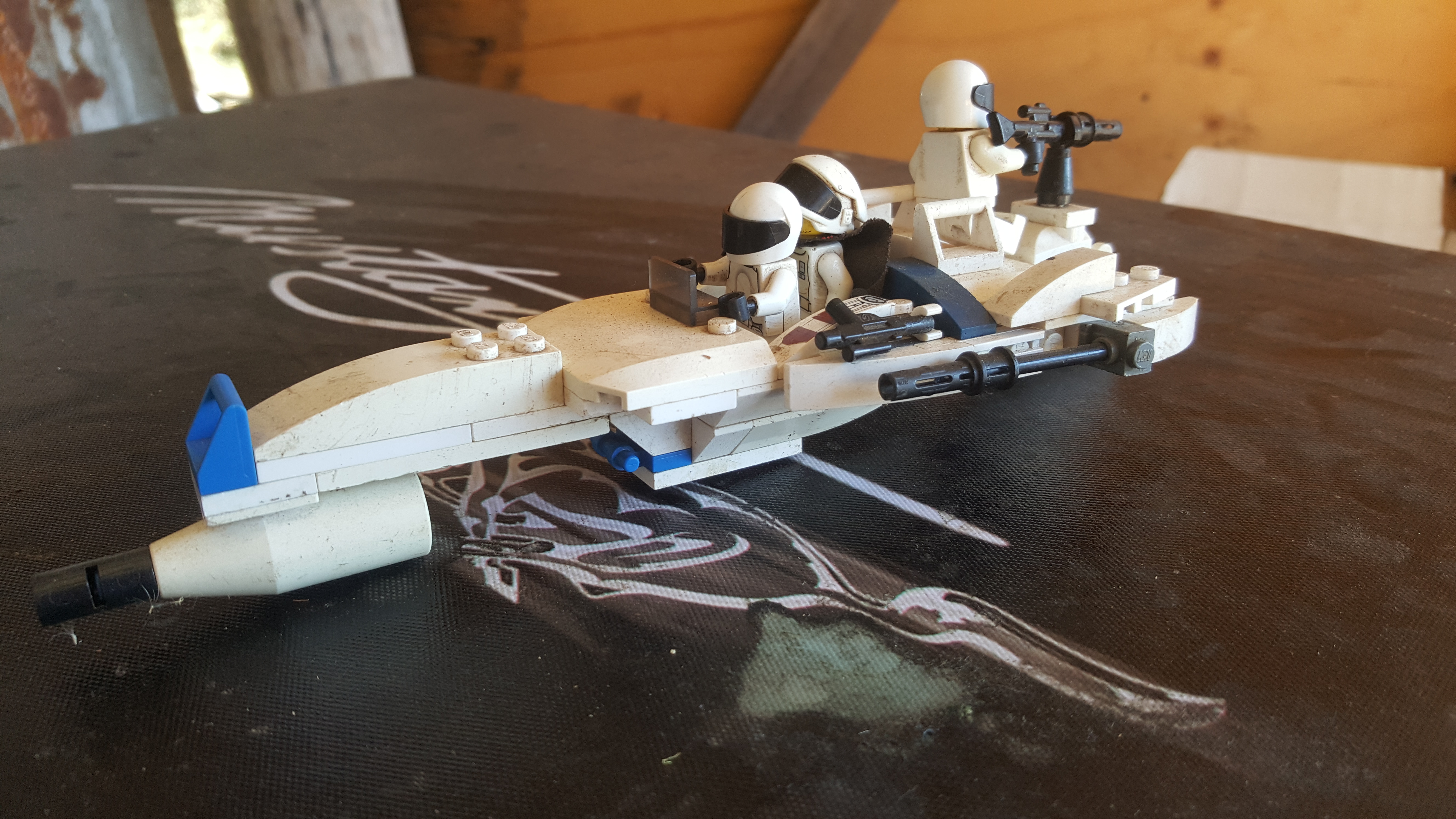 Knights of the Cyan Order fighting beside their Levitican allies against the communist tide. 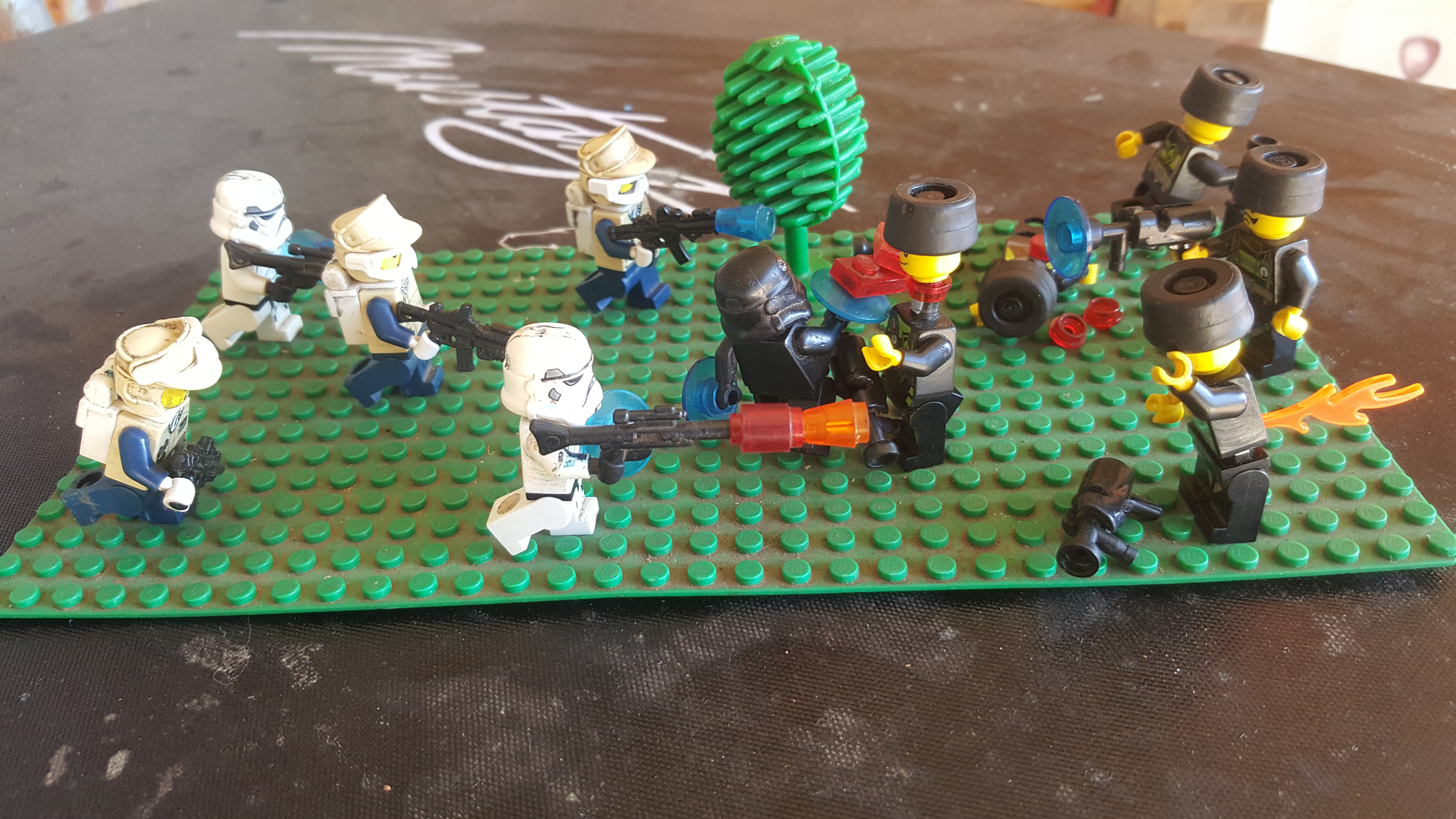 Any compliments, feedback, suggestions or criticism welcome. I was a silly child, and drew on my Storm Troopers with permanent markers. I apologize for any seizures or fits that this may have caused.


I am not entirely happy with the Ambassador but it will do. I am not the greatest builder. Any building tips would be sweet

The sharpie marks, dirt, and the kind of dusty look your legos have make this faction look like they have been in the field for a very long time... without resupply. Also, the White Knights are awesome.
gotta love knitting needles. i can make you a scarf. i can make a hat. i can stab your eyes out. i can make mittens.

yeah they look dirty but, like, in a cool way
Top

sahasrahla wrote:yeah they look dirty but, like, in a cool way

This was explained before you joined.
He lives in a desert, his Lego in in a room where one wall doesn't exist and is open to the outdoors.
So things get a bit sandy.
Top

Yeah but I think they actually work in this case! The Cyan Ordee seems like it's been serving far past the point they should and now are an empty vessel of what they were
"Tallyho lads, snuggle the houses and burn the women! Leave not a single potted plant alive! Full speed ahead and damn the cheesemongers"
Top

Well thanks for the feedback guys.

All that tzan said is true! (Apart from it being a desert, that's a tad exaggerated, but lets not let the truth get in the way of a good story

). I also went through this stage where I drew on my lego men with markers. I regretted it the day after.

In this case it doesn't actually look too bad(The sharpie, I mean) I think the sharpie just adds to the "needs more equipment" vibe
gotta love knitting needles. i can make you a scarf. i can make a hat. i can stab your eyes out. i can make mittens.

I missed these guys - they look pretty cool

Thanks. I posted this when a bazillion other armoury posts were posted so it kinda faded away.


but those blue 501st clones, those are actually worth quite a bit of money on bricklink


Also I used to draw on lego too, I have a few blank faces with my own faces sharpie'd on them
And I also used to tag bricks with graffiti since I was going through a phase when GTA San andreas came out, gang graffiti or something

Kastrenzo wrote: but those blue 501st clones, those are actually worth quite a bit of money on bricklink

Yeah, the 501sts are really expensive. I tried to get some of their torsos and pilot helmets, saw the price tag, balked, then got something else(namely the rogue one hovertank drivers). Damn you bricklink!

OSSUM!!!
Really nice...sweet sweet sweet goodness.
I love the way you've made the troopers look dirty, it really adds character to them..
God in comparison to these, my troops suck balls.

but those blue 501st clones, those are actually worth quite a bit of money on bricklink

I deeply regret drawing on my 501st trooper.

Hiremas Alkerith wrote:OSSUM!!!
Really nice...sweet sweet sweet goodness.
I love the way you've made the troopers look dirty, it really adds character to them..
God in comparison to these, my troops suck balls.

Thanks, man. And I actually didn't make them dirty, they just slowly became dirty XD

I deeply regret drawing on my 501st trooper.

Nothing a few q-tips and a little brasso won't fix.