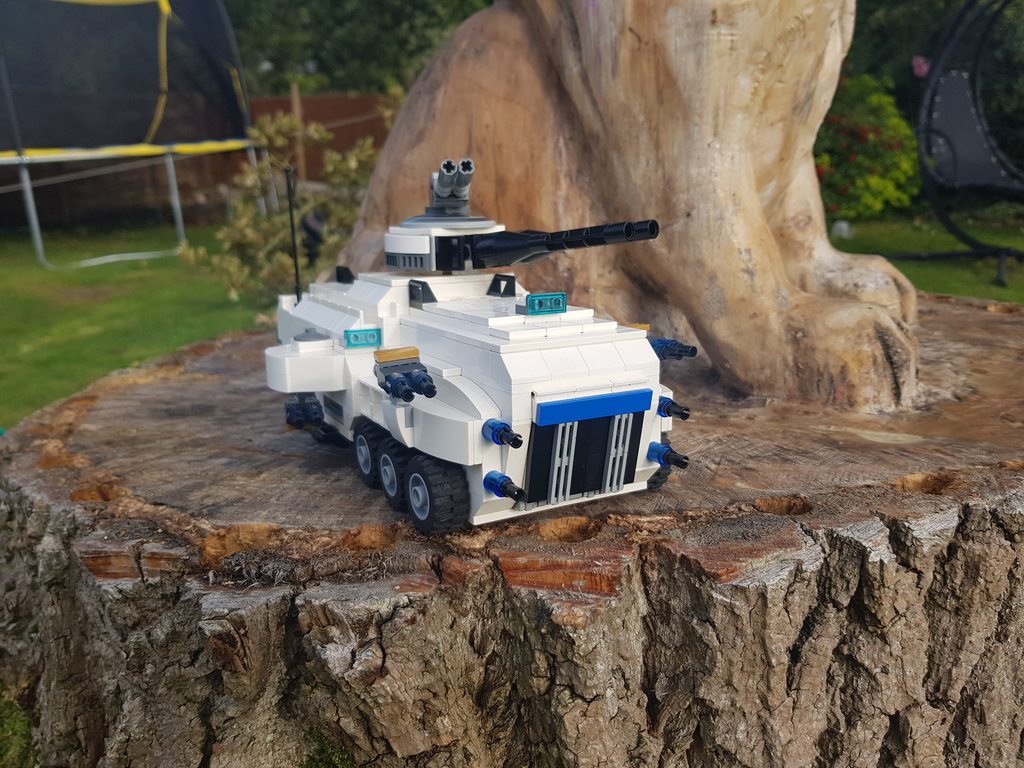 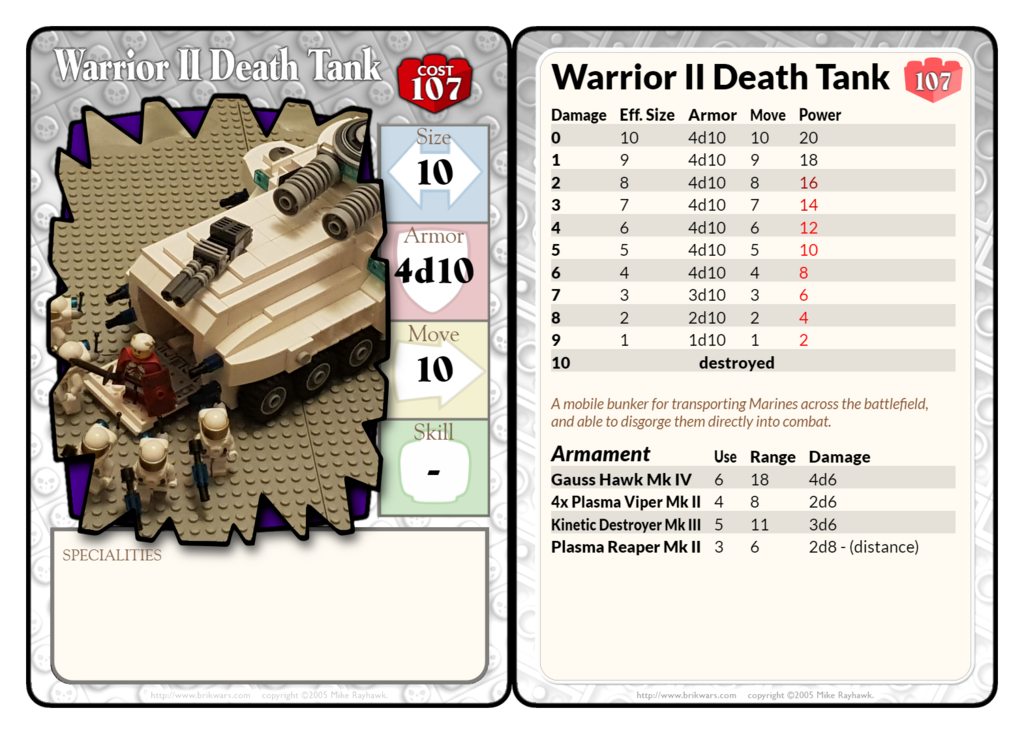 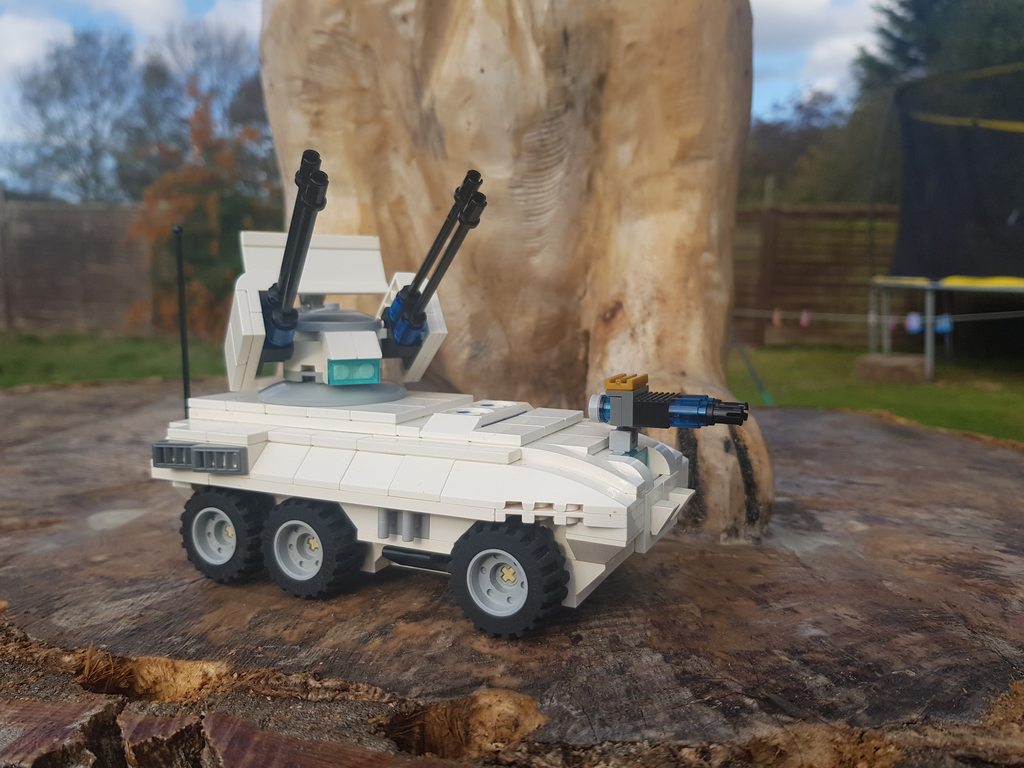 The Cavalryman is an Anti-Air armoured fighting vehicle, built to provide cover for Commando light tanks. Built upon a common frame as the Commando, the Cavalryman is faster and lighter, allowing it to better move about the battlefield to intercept enemy airpower.
Almond Status: ACTIVATED
Top

beautiful curves. can it fit a minifig?
Top 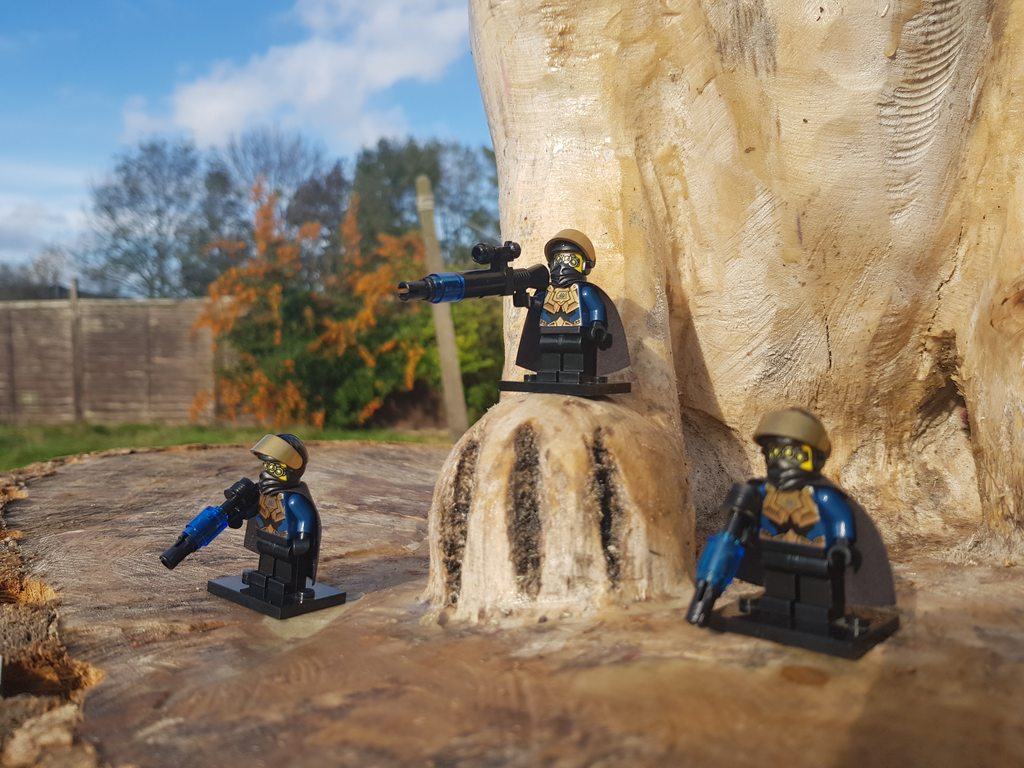 The Ministry of Intelligence's Death Squads are a special branch of their Tactical Operations Group. Cybernetically enhanced with the MkII Mod.17 Class-S “Saint” Cybernetic Enhancement Package specially provided by RARCom. Death Squad Operators are terrifying to behold in combat. Featuring superhuman senses and strength, their cybernetic frames include a number of powerful tools, such as integrated weapons systems, and a short range teleporter.
Almond Status: ACTIVATED
Top

also, I'm stealing that rifle design because it's inspired
Top

sahasrahla wrote:also, I'm stealing that rifle design because it's inspired

Which reminds me, I've been needing to do an infantry weapon overview: 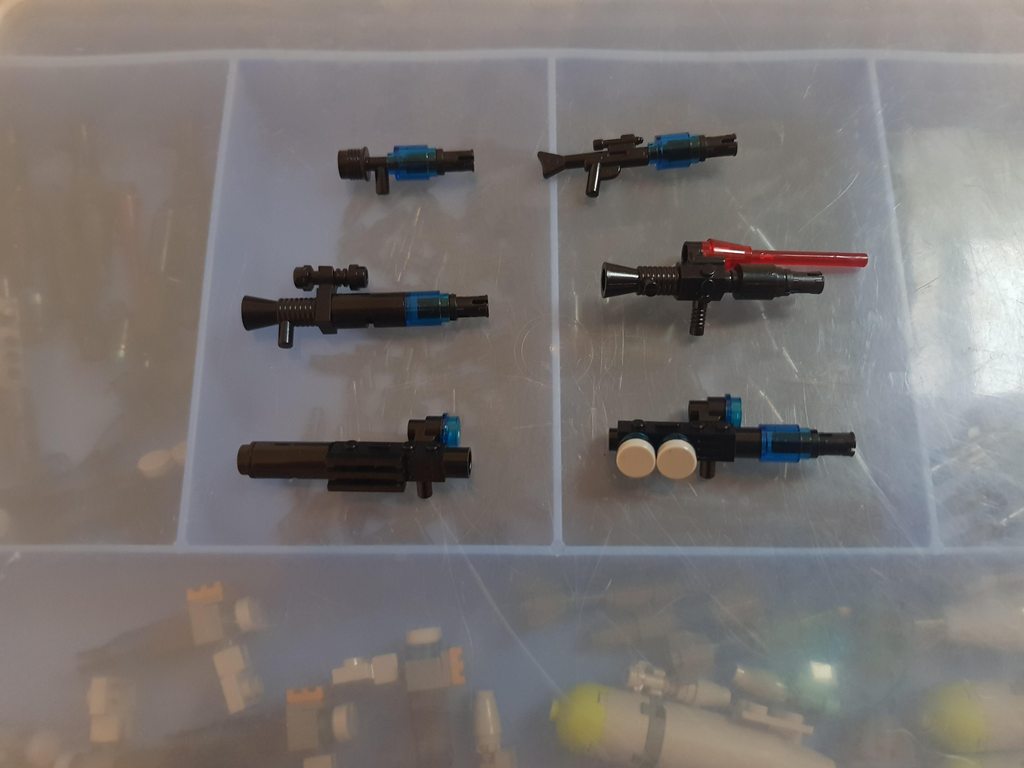 Descendants from Krukov's original line of plasma weaponry. The A7 shares the most in design with these original weapons but is slowly being supplanted in numbers by the more compact C2 Carbine.

Employed almost exclusively by Death Squad Operators, the Agenda makes use of a secondary plasma accelerator to fire projectiles at stunning velocities. Its main drawback is the highly visible nature of its firing, making it most suitable for those with unwavering aim and the ability to make a quick getaway.

Plasma Shotguns have been a signature weapon of Praetoria since their inception. Originally adapted from crude weaponry used by frontiersmen, modern plasma shotguns are reserved for close quarters engagements and dispatching the odd oversized space beast.

Using an EMALS, the Raven fires a variety of projectiles in a safer manner than older rocket propelled designs. These projectiles may feature their own secondary propulsion and guidance systems to give extra range to the weapons system.

A miniaturised single barrel version of the Plasma Viper seen on Praetorian vehicles. The Boa is mounted as part of a Myrmidon Shock Marines flight suit, but is also carried as a shoulder fired weapon by marines, and underslung for Guardian Drones.
Last edited by dilanski on Tue Oct 17, 2017 6:52 pm, edited 1 time in total.
Almond Status: ACTIVATED
Top

Love the armored vehicles, the turret on the Cavalryman really appeals to me for some reason.

What are all those models underneath the cover the sexy guns are resting on?
gotta love knitting needles. i can make you a scarf. i can make a hat. i can stab your eyes out. i can make mittens.

Omega Prime wrote:What are all those models underneath the cover the sexy guns are resting on?

I am glad you asked. It is my Box of Dreams™ 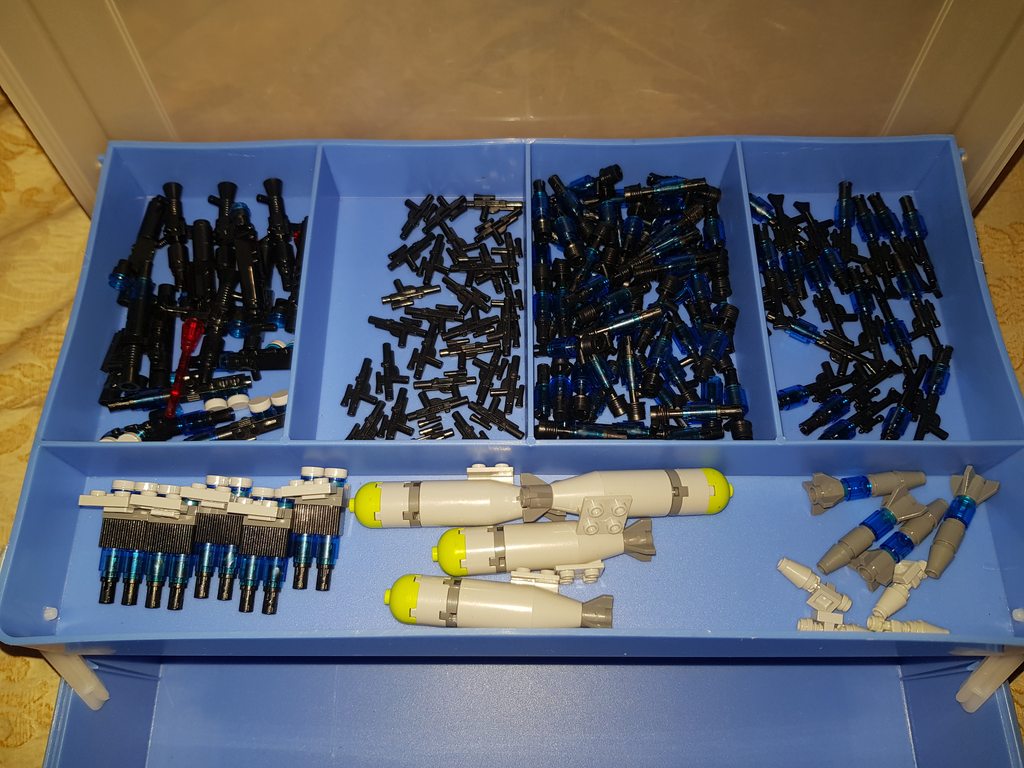 The top rows are storage for infantry weapons, in order Heavy Weaponry, Vehicle Crew weaponry, C2 Carbines, A7 Battle Rifles. All heroes and the Myrmidons keep their weapons on the models, so this is really just for my infantry. Bottom row however is excess vehicle weaponry. I have 5 Vipers ready to be put onto whatever vehicles I build next. And the bombs and missiles are surplus for the Ace Fighters, likely to go onto a bomber/gunship/dropship when I get around to building one. The small missiles with the clips are used for the Raven Launchers, for which I need to make more ammo types.

I have parts sitting around to build another ~50 C2 Carbines, but I am too lazy to put them together.
Almond Status: ACTIVATED
Top

I used to have oodles of guns.

then the minifigs went all 2nd amendment fetishist and everyone has guns now. Now there's only muskets and sharp sticks left
Faction Index - Flickr Gallery

Sharp sticks are the best kind of sticks.

Only the second most controversial defence project in Fleet Commands history behind Project The Next Day. The replacement for the veteran Heathen class battleship has been in development since late GR2013. This would lead to two more iterations of the Heathen in the intervening four years until a true successor would finally emerge.

The Nemesis Dreadcruiser is part of a new class of intermediary warships between the Super-Dreadnoughts and Juggernauts that rule the spaceways, and the Battleships that form the backbone of every major stellar navy. Packing a massive and flexible arsenal of weaponry, Nemesis is able to outrun, outgun and outlast an Exodus-Class Dreadnought.

The designers of the vessel insist their reasoning for waiting four years was sound. Nemesis is the first production vessel to feature RARCom's Infinite-Entity Engine, originally developed for the Universaerium Infinite. This engine can provide an everlasting supply of power to the Nemesis. This sets the tone for the vessels design philosophy. The class was not built to fight in Nehellenium, Omegalon or Magikallenic. Rather these vessels are designed to push the boundary of where Fleetcom can engage a target. While no confirmation has been given, it is speculated that these vessels are capable of intercepting the Immortal invasion fleet, or possibly even reaching the Immortal home galaxy.

Aiding this is a switch from plasma weaponry to a laser based arsenal. Ten "Extinguisher" batteries compose this weapon system, providing a massive upgrade to the "Fire-Torrent" plasma batteries used on the Heathen. These weapons are supported by a stockpile of 96 "Seabiscuit" warp-capable interstellar ballistic missiles. Each missile topped with 12 fusion warheads capable of independent planetary re-entry.

These weapons pale in comparison to the two "Obliterator" antimatter accelerator cannons mounted on the vessels bow. These weapons were made possible by experimentation with the Universaerium Infinite that found the drive capable of producing antimatter. The creation of this terrifying weapon was a byproduct.

Praetorian shipyards are ramping up production in anticipation of the new class. It is ironic then that the Nemesis are not expected to fully supplant their predecessors. Over the years a massive fleet of Heathens have been produced, with experienced crews fully trained. But when needed these new warships will be ready to meet any challenger. 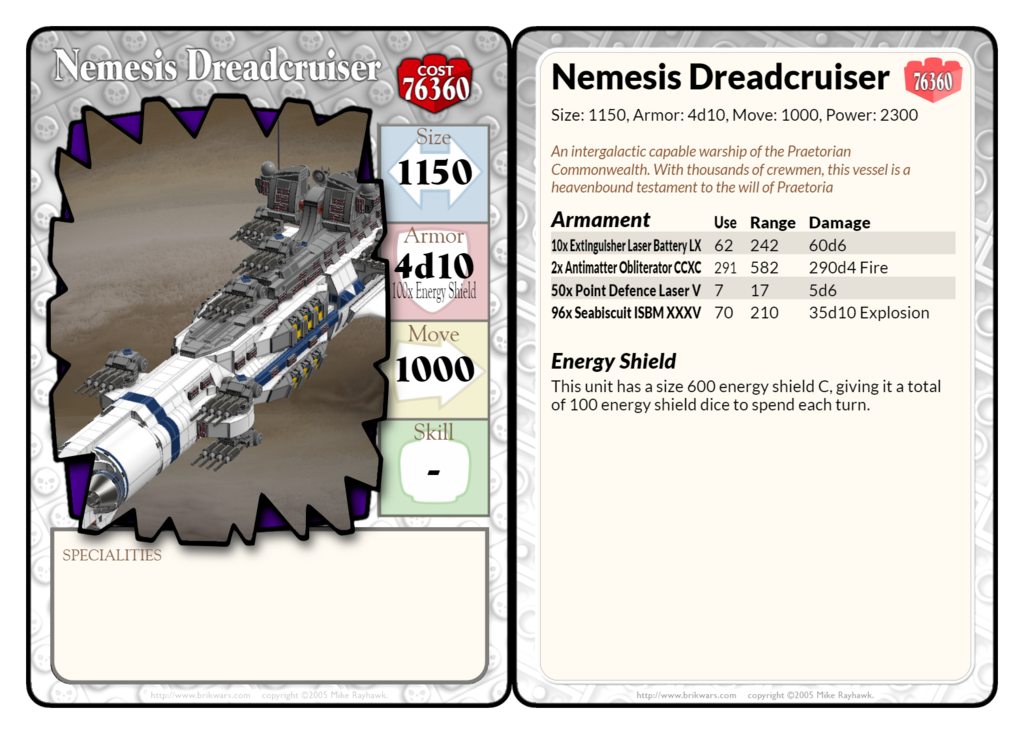