Here's an entry into the 2019 Blarney Build in the Brik by Brik category. It's the fourth in a series of iterations on what has turned out to be a very versatile frame. 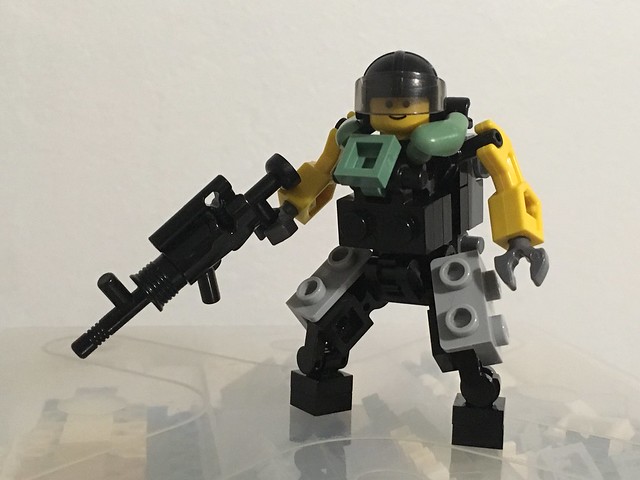 Introducing the new armoured, augmented, and impressively muscular addition to the USA's ranks. Not only can these soldiers resist most small arms fire, they can also carry higher calibre weapons with more mobility than both standard infantry and larger vehicles. 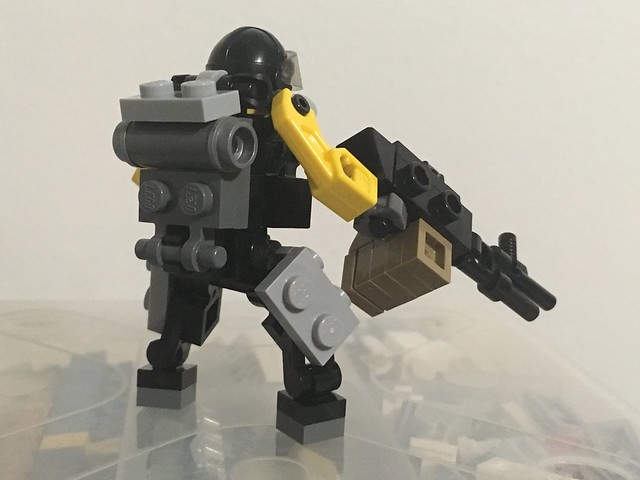 While the soldiers selected for this role are incredibly strong in their own right, this powered armour provides mechanical augmentation to further enhance their physical abilities. 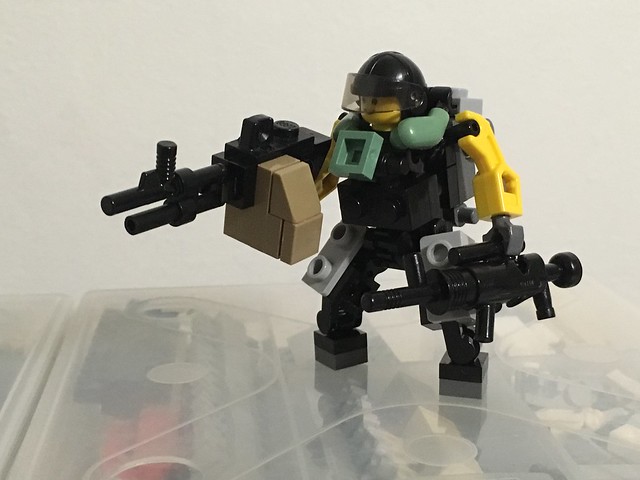 Two weapons have been developed specifically for use by these soldiers: the M1600 assault rifle, and the M6000 machine gun (huge thanks to ninja_bait for letting me almost completely rip off the rifle design). 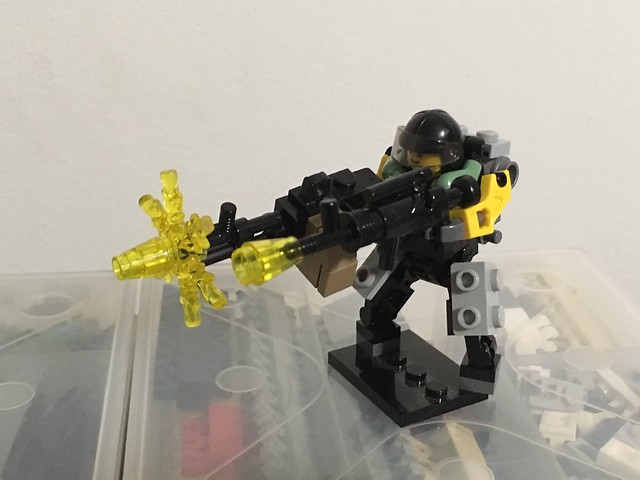 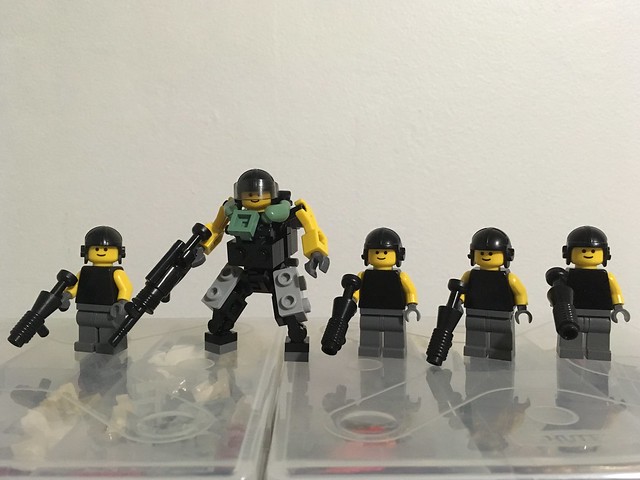 These soldiers tower over their unaugmented brothers. 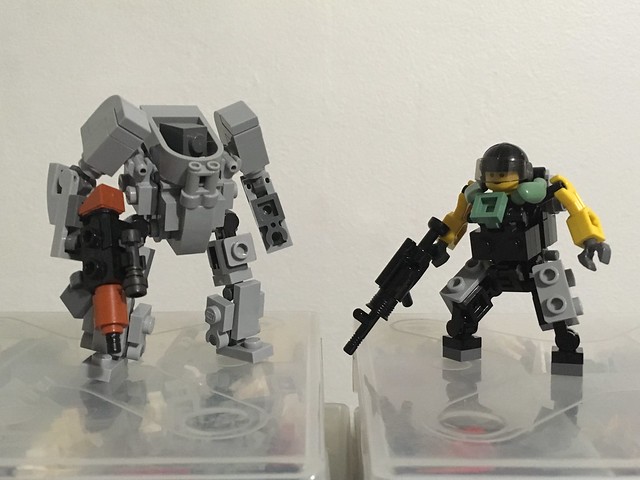 While not an exact equivalent, augmented soldiers provide a pretty close counterpoint to the 45th Union's Centurions. What these units lack in sheer size and stronger metal structure, they make up for in cost efficiency and versatility. They also tested far better with the citizens of the USA than robots did. 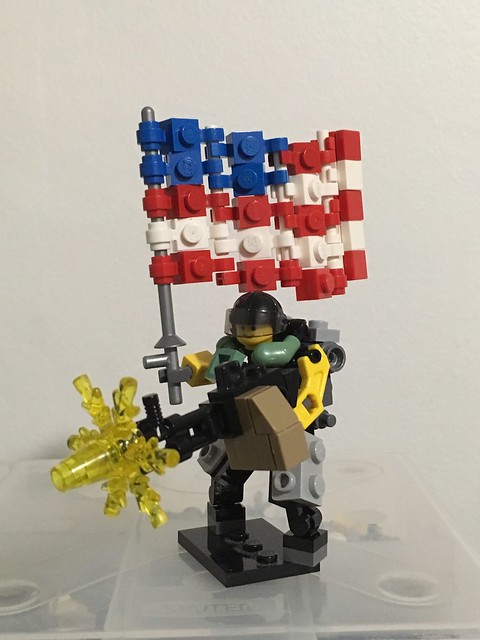 They also make for great pictures like this, making them a recruitment officer's dream come true.

This is amazing! Can I request the building instructions for the USA frame + the 45th union mech?
My Youtube Channel About LEGO and Toys
Top

I love the suit, but especially the flag and guns!

I think that the light bley bits would look better in dark bley, sand green, or black.

Style: 8 - Overall pretty good but I'm not sure about the color blocking with the green and grey
Substance: 9 - technically impressive, I like the guns
Photography: 9 - appreciate the comparison pics
Boast: 9 - That flag tho... USA! USA! USA!
I make apocalypses and apocalypse accessories.

Style-8
I really like the beefy look of this guy, although I also kind of agree on the color blocking.

Substance-10
Have always loved your technical skills when it comes to brikking, this one's no exception.

Photography-8
Nothing to complain about here.

Style: 8 - Not a fan of the yellow arms. Are they flesh? are the mechanical? It detracts from an otherwise badass build imo

Photography: 9.5- I like the other pics to show off the American Flair

Boast: 50 - One for each state in this glorious Nation of MURICA!

Thanks for the feedback, guys!

The light grey bits were intended to be exposed armour plates, as this is less of a full armour suit and more of a super soldier/armour suit hybrid, though I guess that didn't really come across very well. I'll look at some possible alternatives, but I don't have the brackets in dark grey and I don't think they exist in sand green yet, so this will stay for now. I did try a version in all black when building this (possibly a space-faring version?): 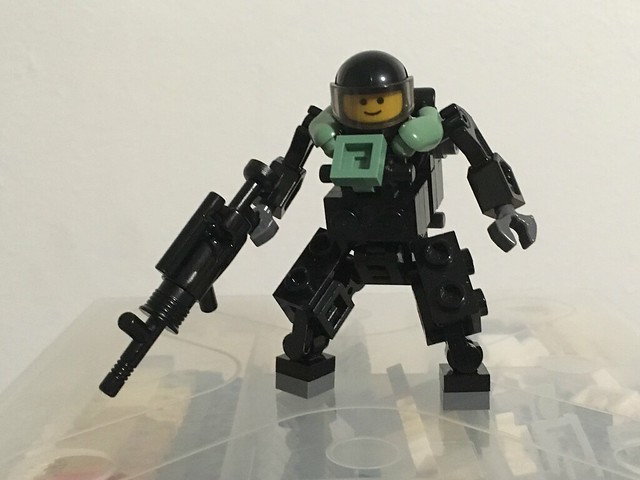 They're intended to be flesh, just amped up. I might change the legs, but I think the arms will stay as is to make them fit in with the rank-and-file troops a little more.