Just a little intro: See I have all these guns and I know what abilities they roughly should have (descriptively) but what stats should they have? Also, I thought some of you might like the weapon designs. I posted in the style of an arms dealer... that's one of the things Dial'O'Death do... hope you like.

We join our gallant and unfeasibly violent heroes as they step out of the recently destroyed bunker of a now dead Tyrant...

Oh Hi! My names Kruze (sounded as Cruise... as in the Missile)... yes that is a Claymore Mine strapped to my chest... I'm an Immortal son, it'll hurt but not as much as it will the people in front. Now, I supply... well, weapons but oh so much more besides... So if you want to forestall the day when your Tyranny is deposed like this poor sap that used to own this bunker then why not let D'O'D take care of all your personal weapon needs... 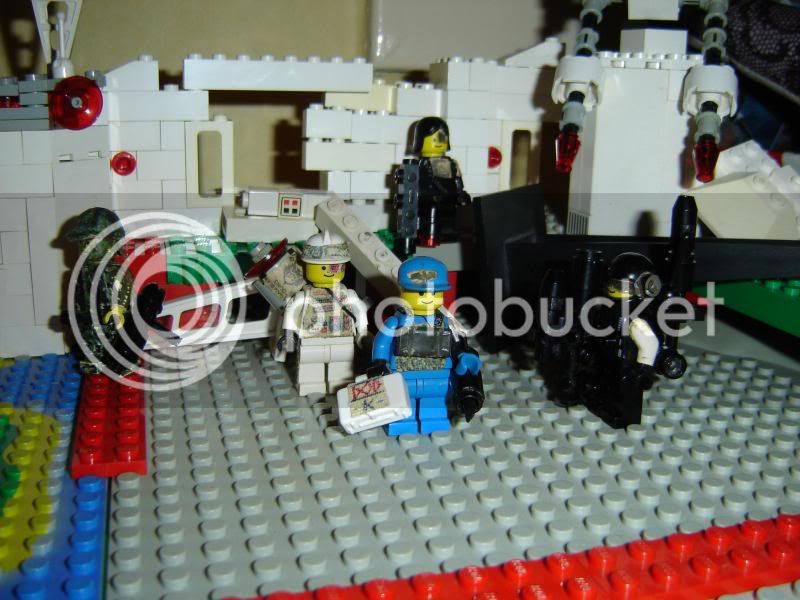 What's that?.. Where are they?.. Why, in the suitcase of course... we Immortals have refined and miniaturised the InfinityCaseTM... look I'll show you...

...see, just a few select items for you too see. If you like, my associate Joe Pineapples (the dude in black with the backpack) and Ulysses Sweet (Adamantium Power Armour and the Fireman's Helmet) here will take you inside and show off some of our wears... have fun now...

Quick, get these bodies cleared away and take the prisoners to the slave pens before anybody notices... Hah, that'll be the last time that client Welsh's on a debt...

Extraordinary. Love the weapons.
"You can get more of what you want with a kind word and a gun, that you can with just a kind word." - Al Capone
My official post number 1000 was "The whole battle?" 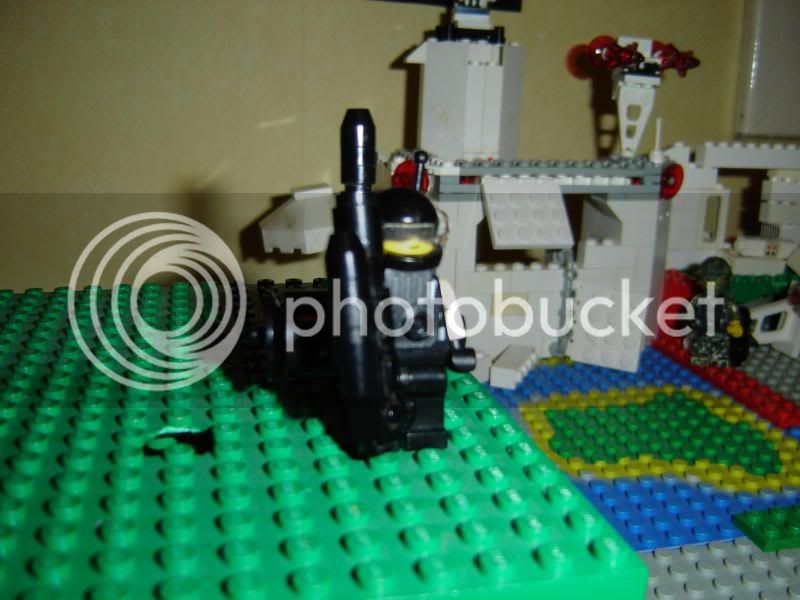 Mr Pineapples is styling the typical Long Range Sniper ensemble with a Plasma Blaster on the Backpack with Railgun barrel upgrade and shoulder slung Blaster...

The Barrel attached to the Blaster makes for a very powerful Railgun Sniper Rifle. Deadly in expert hands.

The Plasma Blaster is fairly short ranged but may fire every turn. It can defeat most medium armoured opponents and has a defused blast area setting for anti personnel and room clearing effect.

The Plasma Bazooka Destructor is all about armour penetration through sheer force. This monster is long ranged and very powerful. No known armour can withstand more than a few blasts from this. It's only draw back is the re-charge rate.

The more commonly seen Plasma Bazooka is a standard Immortal Portable support weapon. It has the same range as the Destructor, a better rate of re-charge but not quite the same power.

The Mini Bazooka is suitable for the use of mortal troops used by the Immortals or as a fine light support weapon. it has a rapid fire and recharge rate at the expense of range and still packs enough punch to cause most armoured vehicles to think twice. 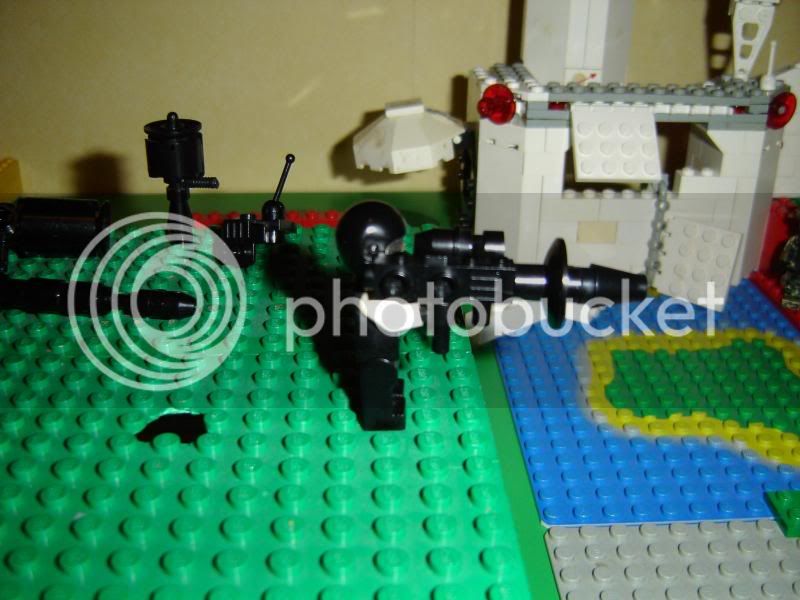 The Plasma Rifle can be used by mortals but due to it's relative light weight, hitting power and rapid fire has found a place in the personal arsenal of the Immortals. Even some of the Maniacs have found a fondness for this weapon.

The Plasma Cannon is in some ways even more powerful than the Bazooka. Able to fire a defused yet powerful blast or an intense pinpoint beam of power that can blast through ANYTHING. The backpack is necessary for the amount of power used and to aid in re-charging.

The Plasma Cannon can be stored on the backpack and is Immortal portable. With the Cannon stored this leaves the operator hands free to use his personal weapon of choice... or the barrel and the backpack can be removed leaving you with a Blaster rifle.
Last edited by Warhead on Sat May 09, 2009 3:23 am, edited 1 time in total.

The Service Weapon is a laser pistol used by mortal crews as a hold out weapon should their vehicle become inoperable.

The Flechette SMG is more of a light weight crew weapon for Immortals. It's high rate of fire can tare even a Maniac to pieces but it is no use against any type of heavy armour.

Another Flechette weapon but with more power and range. Excellent for crowd control, room seeping and just messing with the citizens.

The Ion Blaster is a short range rapid fire personal weapon used by many Immortals as the weapon of choice. (Think SMG)

The Ion Blaster Carbine has a slower rate of fire but a higher energy output.

The Blaster Rifle is a standard weapon for mortal troops and not used by the Immortals otherwise.

The Laser Rifle is another weapon used by mortal troops. It's suitablity for accurate long ranged and power have made it a stable weapon choice.

The Blaster Carbine has a slightly better rate of fire and power and mostly used by Elite mortal units or mortal officers.

Pump Action Blaster Shotguns are mostly used by Immortals and many Maniacs favour the brutal damage these can provide in close fighting.
Last edited by Warhead on Tue Jun 01, 2010 1:27 pm, edited 2 times in total.

The SAW (Maniac) Autoblaster provides squad support for a moderately powerful rapid fire weapon. Mortal Troops can use this unassisted too. Many Immortals and Maniacs use this weapon. It can be fired from the hip at the run by an Immortal/Maniac.

The Maniac Bastard Gun is a very rapid fire and powerful blaster rifle favoured by Immortals and Maniacs alike. It's durable and makes a perfect battle rifle of choice for most warfronts.

The Flechette Grenade is able to flence unarmoured bodies into meat paste or puncture even light armour but it is usless against any hard armour. It can also be used to bash in heads in close quarters.

The AT Rocket Launcher MkI. A small and very portable weapon capable of taking out medium armour vehcles and reinforced doors. Made for use by Mortals but adopted by Immortals too. This weapon has a very short range and is a fire and throw away weapon.

The Ion Hand Blaster is a bare stripped down and dangerous weapon, really only suitable for Immortals as the radiation and extreme heat would quickly kill a mortal and Maniacs just don't have the brains to use this temperamental weapon. It is short range but very powerful, good for close fighting so long as you can withstand the blast back caused by the explosions.

A proper and safe way to throw Ions around the Immortal Portable Ion Partical Beam weapon can sustain it's output or fire a rapid burts. Armour can not stop it.

The Ground to Air HiVe launcher provides man portable AA defence. No Evasive manoeuvres, Chaff or Electronic countermeasure will work against it. Once armed and locked the solid core missile instantly arrives at target without any discernable travel time at a staggering velocity. The results are devastating to the target.

There are other customised hybrid variants of Ion and Blaster technology. Here we see Ulysses Sweet modelling his own personalised Ion Blaster Rifle... he wont let anyone else touch it.

Ok, too awesome.
"You can get more of what you want with a kind word and a gun, that you can with just a kind word." - Al Capone
My official post number 1000 was "The whole battle?"

Thanks, any chance of letting me know your thoughts on stats and costs?

The Dirty Harry of Blaster Weapons. The Bastard Blaster favoured by the Emperors Brother Nameless (That's his name, he says he doesn't need one so STFU... sorry, that's just what he's like though).

The Mini Gun Blaster with Under Barrel Grenade Launcher... as used by The Emperor himself.

Warhead wrote:Thanks, any chance of letting me know your thoughts on stats and costs?

So much awesome weapons...I can't think of perfect stats for them all.
"You can get more of what you want with a kind word and a gun, that you can with just a kind word." - Al Capone
My official post number 1000 was "The whole battle?"

Loooot of wpns...and yet lot of spacemen in one pic...
NO!THERE ARE NO POLAR BEARS IN FINLAND!!!