UNWANTED: The Immortal Rejects - The Wallies

UNWANTED: The Immortal Rejects - The Wallies

WARNING: Insane wall of text, if you're too dimmie to read the text below then you must know these two things. 1) The Mini-Figs are meant to look like this, and 2) You're most likely a dick and if I make a sig of you it will probably end up here.

The Wallies are the throwback rejects of the Immortals, and their living shame and torment. The Wallies are stupid but not like the Maniacs, these guys are like your worst ever Dimmie on speed. They are simply not cool or related in any way to anything cool. Each can be shot or hunted without repercussions from the Immortals, most times it's the Immortals doing the shooting anyway, especially Maniacs, they HATE the Wallies. Many have thought the Immortal Wallies would make excellent allies or fitting specimens for dissection and study but although they retain the Gene Core and above human strength or special abilities they still suck a big bag of dick and are so, so very sub par and annoying that it has to be experienced to be believed. They are concentrated fail to the power of infinity... or something mathematically big anyways.

Basically these guys are what happened to ideas for characters that ended up being sucking. Later it became a joke between my mate and me and we deliberately made some ideas up just for a laugh. This is the result. (Please remember that this was when I was a very young teen and not the mature serious minded broad viewed and tolerant model citizen I have become today)... *whistles*

The guy in the middle is Amok, you may think cool name, until you consider that it sounds like the name of an ancient Conan rip off movie Ator the Fighting Eagle http://shitbusters.vaevictis.nl/screens/ator/04.png (should have been haircut, they spent more on his doo than they did on the film). Amok is the leader (being the first Wallie) and although stronger and brighter than most Wallies he's still a total joke. On the Right is Super Nerd, he is weak and although he can fly he's deathly afraid of heights. The other is Captain Vincible, he is pointless.

from left to right this time: Fat Man... sort of explains itself that one, Creampuff, another obvious characterisation and Chicken Man, he's a chicken... he can sort of fly and give you a not at all nasty peck, he also constantly try's to lay eggs with epic degrees of tedious fecal inevitability, he can also cluck quite well.

Next, again from left to right are Mr Smarties, he's from an advert "only Smarties have the answer" (?) Well anyway, it was very annoying just like him, he used to have a Smarties Cap on his head but now he has an extra hand for ineffectual hitting. Then their is Pansy, Amok's Ladyboyfriend and The Teenage Mutant Ninja Turd, yeah... I always hated the TMNT's.

Ok, these three only fit in with the Wallies because nobody else would allow them to stay. First is Smelly, she's... yup, she is the failed daughter of Eugene the Maniac and so retains his Sewer Dwelling preferences but she generates her own stink of heroic proportions. The next is Sue-Ellen, she is a lush beyond compare and is constantly drunk. She has the special ability to always finding drink no matter what. Yes, Sue-Ellen just like Dallas. The peg leg is hollow for all the booze. The family did try once to invent a sobriety pill but the results where catastrophic and they don't like to talk about it. The last in the picture is the failed son of Eugene, Slimey (imaginative, don't you think?) He is not only smelly but also oozes green caustic slime and acid spit (it is rumoured that one of Slimeys body fluids is used as an ingredient of Maniac Beer, nobody dares ask which one). He carries one of his dads teeth which broke off in one of his attempts to kill him. Both Slimey and his sister like rancid mess and are thoroughly disgusting.

Lastly the Visable Man... he is visible and not very good at spelling. Next is the Cosplay Sailor Moon, she is the latest addition (I was trying to make something for ZZD and it turned out really bad) and last of all the wallies and I dare say least is Robin Hood the Questionable Blade as played by Russell Crow.

Why show you these? We'll they aren't here for no reason, oh, no. They are meeting someone. An alliance is about to be formed.

Dimmies! Runny is there just because his sig looks and acts like a Dimmie, Silvadream was still busy fighting in ZZD and could not be here today. The Dimmie in the 'B' (Blacktron) 'T'shirt is a disciple of BoB, he has the Trollflame and BanHammer of Dimmie. The others are just Dimmie henchmen but the banner holder has big hair because he scalped a Pre 1974 Lego Giant Homemaker.

Wallies meat Dimmies for the first time. The disciples of BoB and the Immortal Wallies.

What depths of irritation could this alliance mean for the Brikverse?
Last edited by Warhead on Sat Jul 17, 2010 5:41 pm, edited 1 time in total.

Re: UNWANTED: The Immortal Rejects - The Wallies

Warhead wrote:Next is the Cosplay Sailor Moon, she is the latest addition (I was trying to make something for ZZD and it turned out really bad)

Ha ha, that'd've been awesome if it'd panned out. I had to ask google if anyone had succeeded elsewhere. It didn't give me any minifigs, but it did give this: 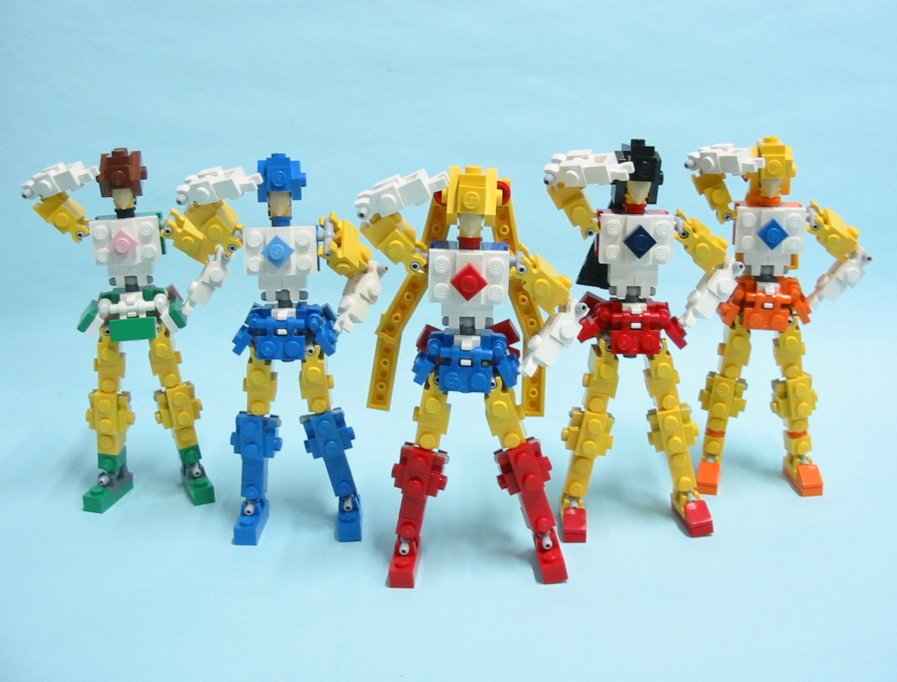 I have a feeling Chicken Man and Sailor Moon cosplay are destined for great things.
Top

Is that a wonder woman i see?