Where have I seen flaming skulls before?

Where have I seen flaming skulls before?

In the Halcyon Empire there's an elite unit entrusted with the most dangerous missions. Picked from veteran marines and trained in stealth and (even more) demolitions, only a handfull are selected and sucessfully pass training each year.

Now, it has come to the empires attention that someone else is using the flaming skull as sort of a trademarked icon everyone recognizes. The discussion went something like this:
"Your highness, this Warhead is the leader of terrible armies and prone to attacks with almost no provocation. If it comes to public attention we've used the imagery things could go boom very fast."
"But we've used this imagery for countless generations?"
"If it was know, shit would hit the fan even faster."
"I see. These Immortals... are they great warriors?"
"Yes higness."
"Send this years skullwarriors to the Immortals as tribute, in the hopes that they will not attack us first."
"A wise decision higness, it shall be done." 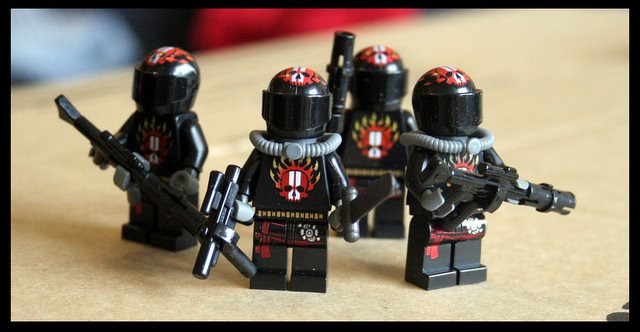 So this is a tribute from the Halcyon Empire to the Immortal dito. We haven't decided wich side of the fence to stand on yet (as in all wargaming it makes sense to gang up on the biggest threat at once...) but anything is possible. We're contemplating things.

Squad of four soldiers: 2 with assaultrifles, one with scoped rifle, one squadleader with smg and sword.

Communiqué to the Emperor of Halcyon from High Lord Warhead leader of the Immortal Vanguard wrote: You have indeed honoured us with a most gracious gift my Lord, and we would be less than gracious in refusing it. I gladly welcome the Halcyon Empires tribute and shall put such stalwart troops to good use against those that would cause our Empires harm.

May I also do you honour by issuing an Immortal Envoy to your home where she can ease any fears you may have about our intentions and we can learn more of our noble cousins the Halcyon..?

Regardless my Grandfather the Emperor himself shall hear of your generosity and I am sure I can speak for him when I say we would be glad of the friendship of the Halcyon in the coming days of strife.

Nice troopers, they really look like an elite force!
NO!THERE ARE NO POLAR BEARS IN FINLAND!!!

Are these guys custom?
An army marches on its stomach, and its favorite food is fudge.
Top

I think those are World Racers pieces.

Yep, World Raiders. I need some of those helms for Immortal Terrorkahn troops.
she/her | formerly known as ross_varn | exiled for the good of the f.e.l.c.
Top

yes, these look seriously badass. they would fit in perfectly with the Immortal troops, I might have to pick some up...
Paladin Corps
Paladin Corps vehicles
Top "Father, what is this I hear about you contacting the Immortals?"
"Indeed I have done so. It seemed like a wise decision not to anger them, and they proved to be both gracious and well mannered, something that is rare in these days."
"But there is a vast alliance forming against them! If we side with them, we are sure to be destroyed in the ensuing conflict!"
"Nonsense! And there is no formal alliance, I am yet gauging what manner of men they are." "But sending a tribute? Will that not be viewed as taking sides? And our best! You weaken us!"
"We have been offered an envoy in return, a direct link to the Immortal high command. That is valuable."
"Surely you are not going to let on of them here?!?"
"My dear son, it is already done. I can still rule this empire just fine on my own. Here she is, greet her politely." "This is insane father! She will report everything!"
"Naturally, and we will no doubt be deemed an empire worthy of consideration."
"Does Lord Cake know about this?!?"
"He does not, and nor will he. That is partly why the palace is not situated on the ground, and you will not tell him either - I forbid you. My word is your command."
"Father! Cake has helped us since we first made contact, he has helped our empire more than anyone or anything else, and you do not involve him in this decision?"
"He is not part of the family, even though valuable. In time he will know and approve. Now go and remember my command." "Very well, but I say this - your flirting with the Immortals will end badly."
"The Halcyon Empire will be stronger thanks to this, you will se in time."
"The emissiary will steal our secrets!"
"She is watched, trust the training of our watchers like you trust in your own on the battlefield."
"We will speak of this again another day father."
"We will. Now go." That particular Immortal Envoy is prized for her skills... of, um, rigorous nocturnal negotiations.

I believe if I'm not mistaken her name is Lotus Vyper. A lovely gurl, one of the Empires Psi-Intel Corps too I hear. Good Psionics are so hard to come by these days.

The set is amazing! Wonderful job Muff, love that throne room. One day I shall have one just like it too. The family look great too, very regal.

agreed. Nice bit of plot there, hopefully leading into a forum battle? Anyway, those elites look seriously awesome, hope they side with the Anti-Immortal Alliance (you know, after this stupid guy is kicked off the throne

enders_shadow wrote:agreed. Nice bit of plot there, hopefully leading into a forum battle? Anyway, those elites look seriously awesome, hope they side with the Anti-Immortal Alliance (you know, after this stupid guy is kicked off the throne

Well, as of now I guess Lotus Vyper will have her shapely legs wrapped around the old emperor in no time at all. The immortals does have the diplomatic advantage since there's someone to negotiate with, the anti-alliance should have someone responsible for foreign relations and do a bit of smooth talking...
Halcyon Empire Marines * Halcyon Empire Arts & Culture
Crocs
Top

Hey, I used those helmets for the Vol Huskarls.
Hmm, maybe they were originally taken from slain Halycon Elites as a test of the Huskarl's battle prowess. Do you mind if I work that into the backstory?

Either way, Awesome units.
"If someone ever tries to kill you, you try to kill them right back." -Malcolm Reynolds

Tuefish wrote:Hey, I used those helmets for the Vol Huskarls.
Hmm, maybe they were originally taken from slain Halycon Elites as a test of the Huskarl's battle prowess. Do you mind if I work that into the backstory?
Either way, Awesome units.

I don't mind, go right ahead

(So, maybe we share a border? Or are you just raiding far from home?

)I thought it strange noone used those helmets or torsos before since they're very brikwarish and extremely Immortalish, but apparently you did without me noticing. The Huskarl's look very good and the helmets fit in well with the red/black overall colorscheme. Nice.
Halcyon Empire Marines * Halcyon Empire Arts & Culture
Crocs
Top