iProducts are bullshit and I don't even like beer.

Hello, and my name is Steve Jobs, CEO of Apple Incorporated. Have you ever heard of the TSOC? The Scythian Empire? The Assyrian Star Empire? All of their brilliant AI's were developed by us, here at planet Cupertino (Not Briktoid though, those are Microsoft and see how much success they're having?). We are the leaders of the computing industry, and are currently the most valuable corporation in the Brikverse, beating out Royal $hell, Googel, and AMScythia. Every corner and citizen of the brikverse uses our superior products in both military and civilian fields. Now, I'd like to introduce you all to some of the mind-blowing innovations we have come up with recently.

First is our core of human enforcers. Consisting of enthusiastic college interns who want to do more than peddling iPads at our stores, they keep our AI units in line and supervise battles. They are led by my trusted advisor Tim Cook in his suit of [reinforced] recycled-aluminum armor.

The majority of our forces, however, are made up of MacBots. The iBot Commander in the front is enhanced with command abilities and leads the other MacBots. Trailing him are normal MacBots with built-in lasers, then armor MacBot Pros armed with a rocket each, and finally a MacBot Air in the back.

Special Ability: At the beginning of its turn a MacBot may declare that it is going to Risk the Spinning Beachball. It rolls a d6, and with a roll of 3 or higher it may take 2 actions that turn. If it fails, its processors take a spinning beach ball and it shuts down, losing its action for that turn and taking an action next turn to reboot. Upon a second spinning-beachball the processors cause a size 1 explosion.

Additionally, in order to protect our Scythian factories from protestors and labor unionists we have created an AI tank, powered with the processor of a single Macbook Pro. While it is manned with a human gunner to ensure it does not go rogue, the AI can handle itself on the field of battle and can easily dispatch enemies such as Microsoft box-dropships and Google's wizards of evuul. 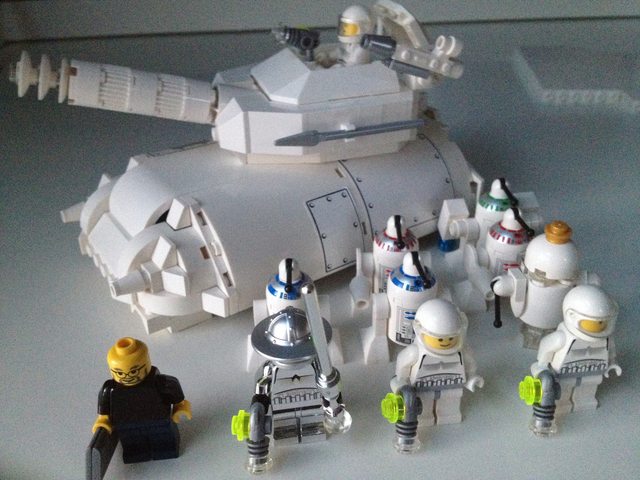 A small sample of our military might. At this rate, Microsoft will not only be kicked off the S&P 500 but from the very brikverse itself.
Last edited by Colette on Mon Apr 03, 2017 12:49 pm, edited 2 times in total.
Top

It can't do shit, though.

It can't do shit, though.

Also, all Enforcers have Mechanikal Ability, I guess. Now I need to go get some Series 7 Minifigs and build an army of genius programmers.

These guys look like they'd fit right in, style-wise, with the Pax Corps.

stubby wrote: These guys look like they'd fit right in, style-wise, with the Pax Corps.

Apple Corps is the company the Beatles own.

Did you mean Apple Inc.?

Meet Siri (no not the Trattorian one) and her genius programmer friends.

Stat time: Siri is a super-intelligent Apple Hero but is incapable of doing anything without orders. An ally can command her to do something but must roll a d6 to see if she understands him. Upon a roll of 3 or better, Siri follows the order, but on a deficient roll Siri doesn't understand and instead searches the web and accidentally causes something hilariously bad to happen on the guy who gave the order (i.e if Siri doesn't understand "fire gun" then she searches for it and a mercenary sniper appears to blow off her master's head, etc.)

Genius hackers roll a d6 against an opponents d6 (like heroic feats, really easy and I do it for mediks too), and if successful, can choose a single system on an enemy vehicle to hijack (ie tank gun, helicopter rotor, mech's leg) because we all know everything electronic is connected to the Internet. If unsuccessful, his hubris and delicate teenage-self-esteem are shattered and he gets a negative modifier of -1 for the next time he hacks, and these last until the next time he hacks successfully up to a maximum of -3.

*Optional Rule: If a genius programmer rolls a 6 on his hacking attempt, the controls for the hacked system are now infected with pr0n and any minfig using them receives a +1 skill modifier.

Ham701 wrote:Apple Corps is the company the Beatles own.

Did you mean Apple Inc.?

Honest to god, I double-checked your IP to make sure you're not posting from Norway or something and English is your second language. There was a joke, you missed it, it's too late to go back and explain it. Just go sit in the corner and look ashamed.

It's at times like this the Gamma Corps is glad it runs various versions of Linux.

Now, if only the rank-and-file techs could figure it out. 90% of the Lambent Electronic Expertise Teams were on Fico...
READTHEFORUMCODE!!!

Elmagnifico wrote:It's at times like this the Gamma Corps is glad it runs various versions of Linux.

Is it time for someone to make a giant war penguin?

And, as Natalya said, iProducts are still bullshit, even though your army is pretty good.

Colette wrote:(Not Briktoid though, those are Microsoft and see how much success they're having?).

Character ranting out of the way, nice job Colette!
Top

'MACSTERMINATE' is my new favorite word.

Plastik Armory: a bunch of weapons and abilities compatible with the 2010 rules.
Top
Post Reply
20 posts