One man, one vote

Not until you're 21, mister man.
Just Monika
Top

As stubby said, the forums always drunkenly stumbles to wherever it want to go. It always survives even the worst of things, the obnoxious trolls, the waves of shitposts, the mass deletions. This forum has seen Silvadream and "good" spamming, PandoraNuker and antimortallium kanon fucking, Asterios and his 15,000 minifigs, the Benny Purge and the Piltogg Purge and the Overlution. We've lost Quest of the Hill and the original politics threads and some of the best pieces of forum history and got in exchange n00b waves and shitposts of IRL politics, trolling, and meme flavors of all sorts.

But through it all, the forums always survives.

Overwatch, in the long view, isn't even the worst we've seen. He's just the latest cynosure in a long tradition of shitposters that have spanned this forum's history.

Stepping back for a bit, I've realized that if there was a cancer killing BrikWars, I was the really poisonous chemotherapy trying to make it better but making it worse. The AN-TA War had a good run, but forcing the forums to continue following its theme of Kommon Kanon and Scythe Kanon after it was over was like forcing the ocean to flow a certain way - futile and doomed to failure. The forums are a wild wave that crashes through whatever it wants, not able to be controlled by the dictatorial whims of a single user. And the friction produced by that enormous resistance was unhealthy and worsened the situation. The only real fix was to not fix anything at all or at least keep minimal enforcement to prevent the whole thing from totally ticking over - I just had to accept that the forums were moving in a new direction, whether I liked it or not.

I reread the BrikWars rulebook and it reminded me what the spirit of BrikWars really is about (and also that Scratch is correct about the redshirting rules) - at least in part, it's about creativity and flexibility, the creation of a ruleset that really works with almost anything. Whether you want to make a traditional space empire or a modern-day non-spacey tank army or a medieval barbarian tribe or a roving gang of shitty anime characters who fight over pink sparkly bricks, BrikWars will accommodate it. Not everything has to be shoveled or shoehorned into the Nehellenium Galaxy. And the forums should be the same way. We should be accepting of all ideas and encouraging of all newbies.

A little disclaimer: while I think broad freedom is the best way forward, I should emphasize that this is not absolute freedom. There are obviously limits (and we only really had to find out b/c of certain recent shitposters). These limits should mainly control obvious trolling intent and harassing other users, since both of these things serve no purpose or actually contradict a liberal policy's goal of welcoming all newbies. For example, IRL nobody thinks about the basic law against murder since almost everyone will probably not commit murder in their lifetime and that law exists to punish the few uncontrollable rogues. But people get annoyed when the government starts needling in tiny day-to-day affairs, like a ban on chewing gum. Overall I think the admin team does a good job of removing the truly poisonous posts so it's not really something to worry too much about. I was too worried about making the rules stricter to control the shitposting 1% and thus annoy/punish the well-behaved 99%, when really we should just rein in the 1% shitposters and leave the remaining good 99% as free as possible.

I guess forum oscillation is more accurate than forum decay. The forum has its ups and downs, but it always recovers from a rough period. Duerer, RedRover, Silent-sigfig, and KommanderKen have really done an outstanding job of picking up the slack and maintaining a healthy amount of content and activity.

The best advice, as always, for trolls is to ignore them. The more attention you give them, the more powerful they become. And if they start really doing outrageous shit, I have faith in the admin team to deal with it, as Natalya, Scythe, and Stubby, no matter how they might otherwise portray themselves, have some element of basic humanity.

Does anything really need to be done apart from what's being done already? I guess we could get rid of future forum music and the seizure avatars and the weeaboo sub-forum, but these actions are all really just "nice" things and not really necessary for survival. The forums, as stubby said, always finds a way to drunkenly stumble forward.

Oh, and for the love of god don't ban Silverdream or Duerer. The forums are very robust as I've said before and would probably eventually find a replacement for anyone, but jesus christ in the short term that would dent and limp the forum's quality content.

Honestly Durer is shoulder at least 50% of this forum in terms of brick content. He is the hero we need but don't deserve. Bravo

Aww, I really appreciate, how you back me up on that matter. You guys are rad!

But if you'd really like to have my 2 cents, I do not think, that blaming a certain group of users for dragging down the forum would make anything better in return. That's borderline-fascism! What I think is, that we should have a more consequent behaviour on dealing with shitposts like denying them any attention or even delete them (only if shit really hits the fan).

I don't understand what constitutes shit posting when the most famous member of the forum always talks about fucking milfs and one of the admins gets fucked up and drunk posts all the time.
Just Monika
Top

Drunk posts are not shit posts, they are the best posts. With that said, I see what you're saying.

I can admit that my +1's were definitely shit.

I would like to like to state I read none of colette's post but I am still very angry at him for unplugging those computers and believe he should be punished, if not by his university, on these forums.

I motion that the case of People With Morals vs Colette be promptly moved to trial.

mgb519 wrote: Can you name one person who has generally said they loved the autoplay music?

I think it's fine, but I only listen to it when I want to and I have had scriptblockers running since long before it was introduced.

we can do it, we have the technology. If anyone has all of whiteeagle's posts saved I can write a bot that will randomly post one of them into any thread. I could even make a madlibs out of his posts but I don't know if that would be coherent enough to be funny.

Inspired by overwatch, I have decided to further this discussion by the ancient ways, as is tradition. 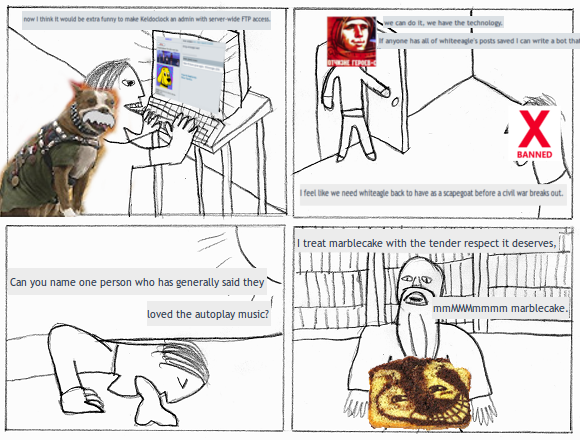 No idea, if that would be recognized by our mods, but I'm still making some suggestions for improvements:
-No music, strobe avatars, etc. - It has been already said several times by others, but considering, that we have several users, that avoided the forums just because of that, this issue can't be mentioned enough.
-Cut/Merge most off-topic boards - I get, that these are supposed for containment, but do we really have to open up a subforum for every piece of junk? I think most off-topic stuff doesn't merit it's own subforum and ditching some of them would even help out with managing the entire forum and offer less space to shitpost.
-Ditch all Goon/Troll/Noob user tags - Do we really need to put every user into some dumb groups for every dumb little shit? There's really no need for that and it could fracture the community, at worst!

EDIT:
-Abandon Preservationist stances on forum posts - I see, why it would be problematic to delete content related threads/forums, but certain threads really amount to nothing but asspain and shitposting. We don't really have to preserve every piece of shit on the forum and actually be more open towards the occasional spring cleaning.

I am all in favor of "Abandon Preservationist stances on forum posts" though. If you want something preserved, put it on the wiki, because I delete posts and threads like a motherfucker and the rest of you don't even realize.

What post number is this one in the database? 323151? And how many posts does the forum think there are in the official postcount? 204481? That's some 120,000 missing posts. That should tell you something about my opinions about preservationism.

I really think if only one of those is dealt with it should be the music. There have to be better, funier ways of bothering people that don't bother THE ENTIRE ACTIVE FORUM USERBASE. Because then all you have is people complaining about the music, and no one spends the time to laugh at them because they're busy complaining too.

mgb519 wrote:I really think if only one of those is dealt with it should be the music. There have to be better, funier ways of bothering people that don't bother THE ENTIRE ACTIVE FORUM USERBASE. Because then all you have is people complaining about the music, and no one spends the time to laugh at them because they're busy complaining too.

Ha ha ha the fact that you're still CAPITAL LETTERS mad about this is making me laugh right now and there hasn't been any music in months. It's the gift that keeps on giving

If you give me mod powers again I will happily delete posts I personally dislike or move them to forums I don't care about.
Last edited by Silent-sigfig on Mon Mar 14, 2016 11:13 am, edited 1 time in total.

stubby wrote:Ha ha ha the fact that you're still CAPITAL LETTERS mad about this is making me laugh right now and there hasn't been any music in months. It's the gift that keeps on giving