The time of war is upon us! 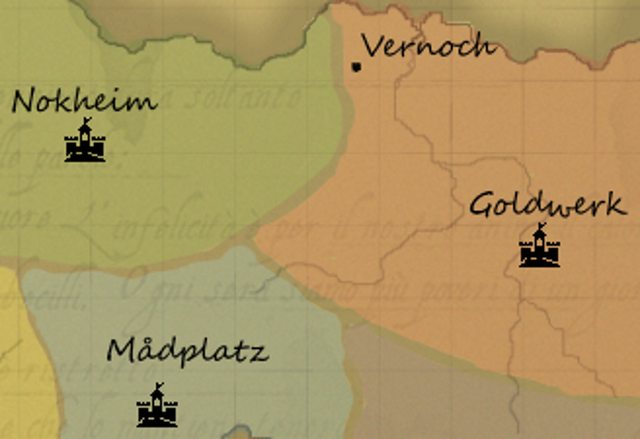 Filthy lapdog of Baron von Kraut, Kaptain Messer is launching an attack on a border village of Vernoch. The valiant lady Heidi, protector of the town has taken up arms and tries to fend off the invaders! 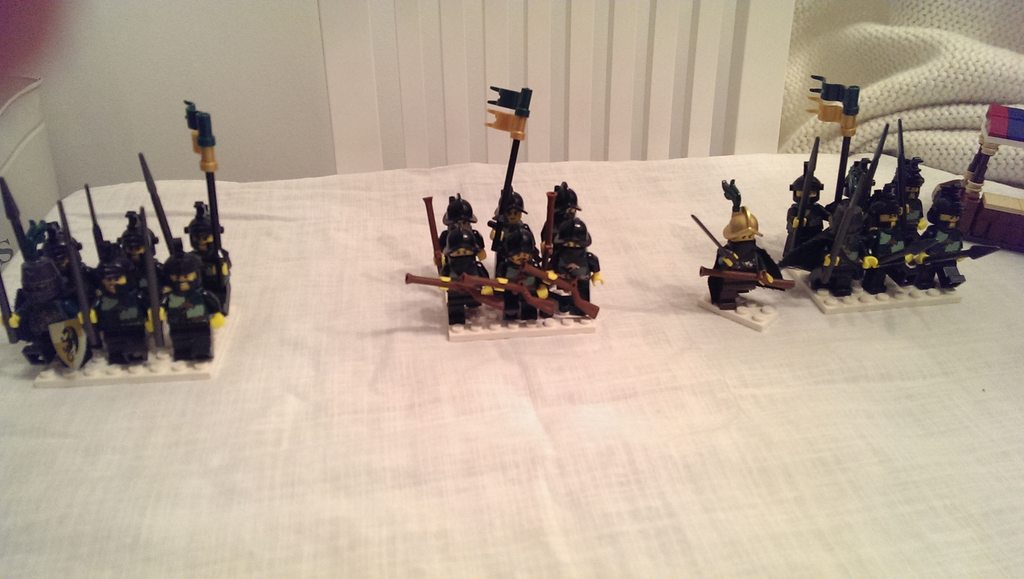 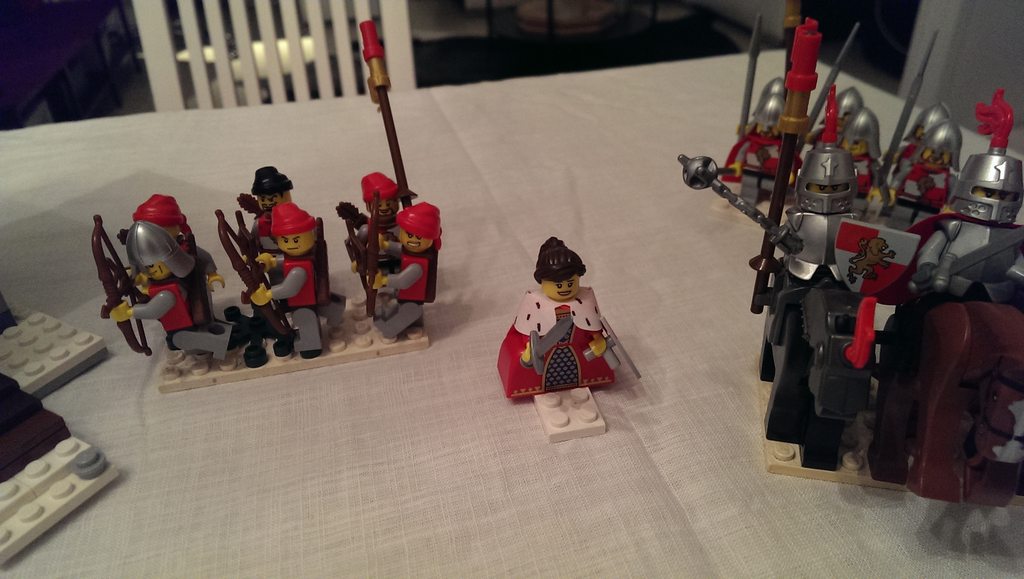 Armies have been assembled, defender being a female had the right to start first. 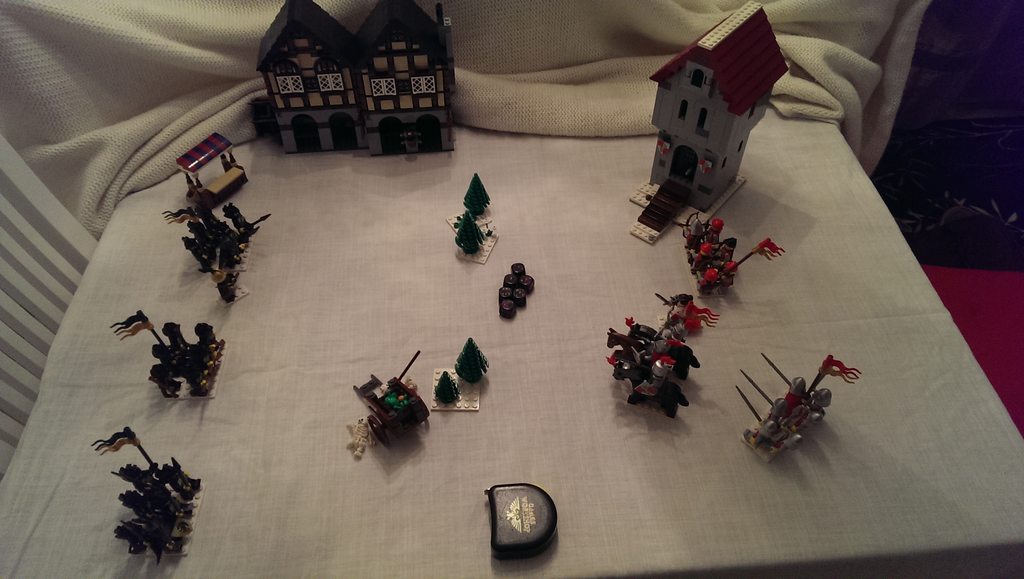 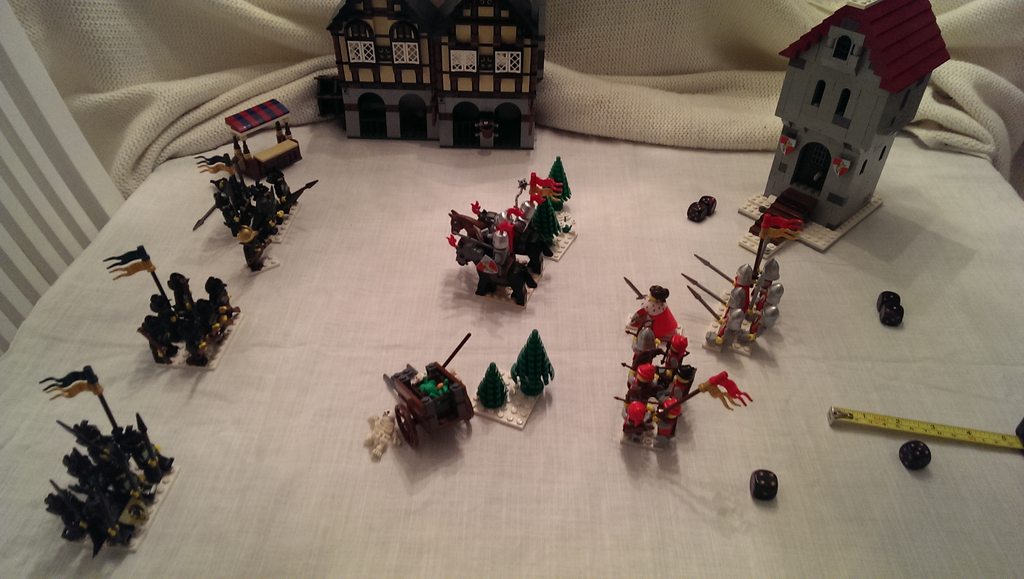 State Troops and knights march forward towards the invading enemy.
Lady Heidi uses her "Inspiring Presence" to inspire the Knights so that they will not falter! 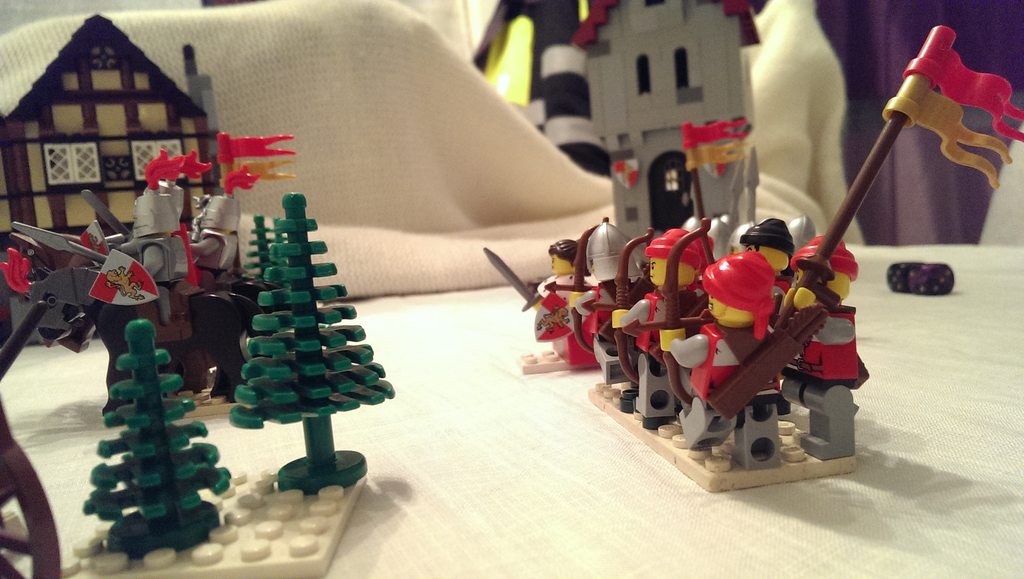 Archers rain a volley at the enemy spearmen that are guarding Kaptain Messer. 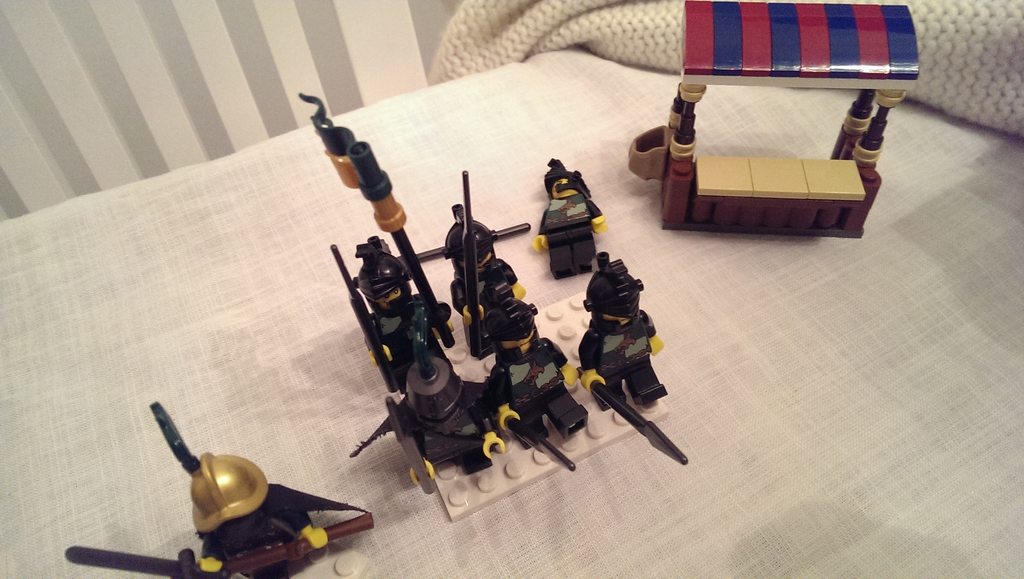 The hail of arrows struck one spearmen to the ground, bringing swift death. 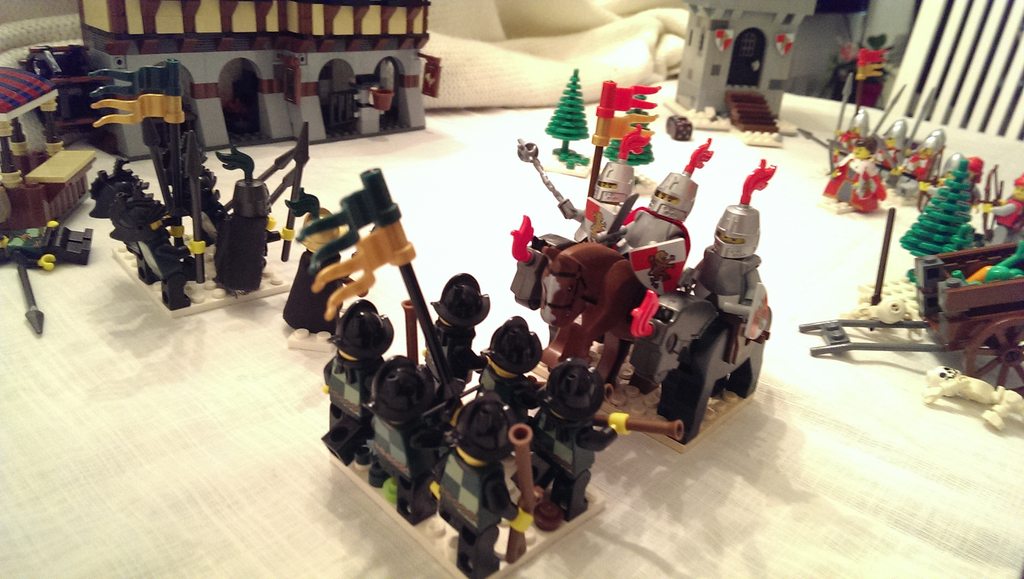 The knights are able to use charge within the first turn, immobilizing the handgunners. But unable to deal any serious damage to the unit. 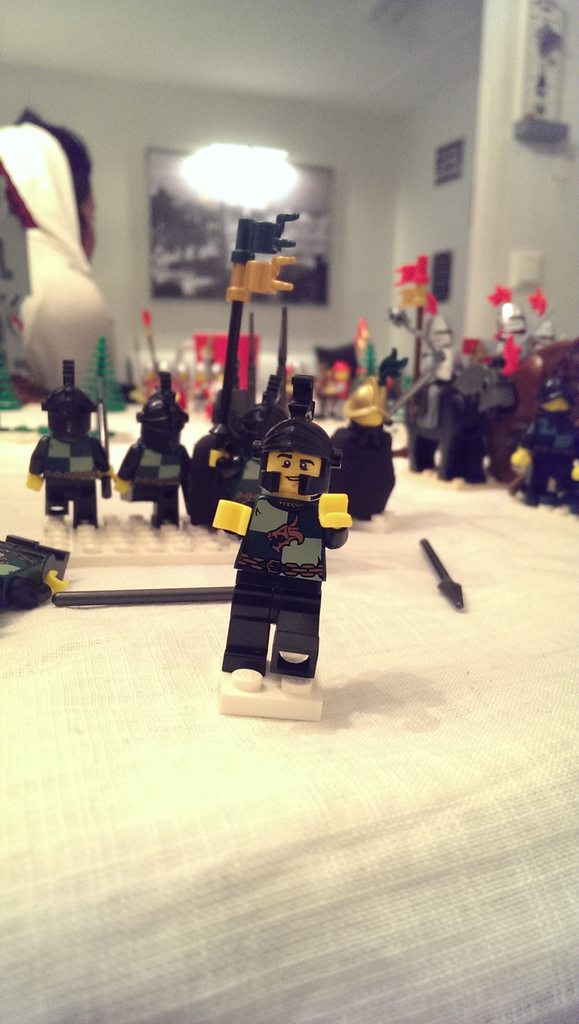 As the spearmen took losses, their bravery was at test. One of the spearmen panics and flees the battlefield in terror! 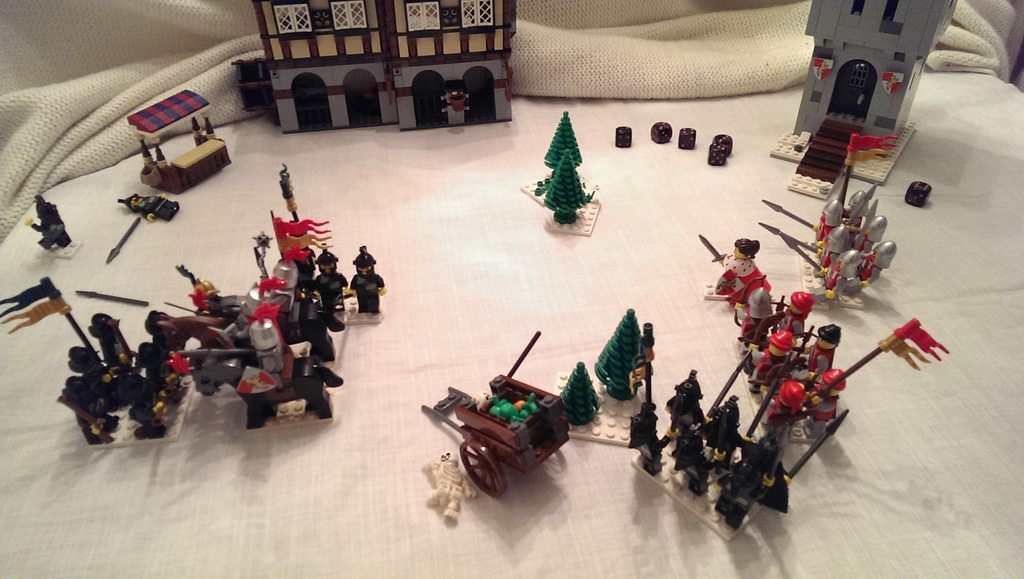 Kaptain Messer charges himself and the nearby spearmen to flank the knights, and orders the other spearmen regiment to charge the enemy archers! 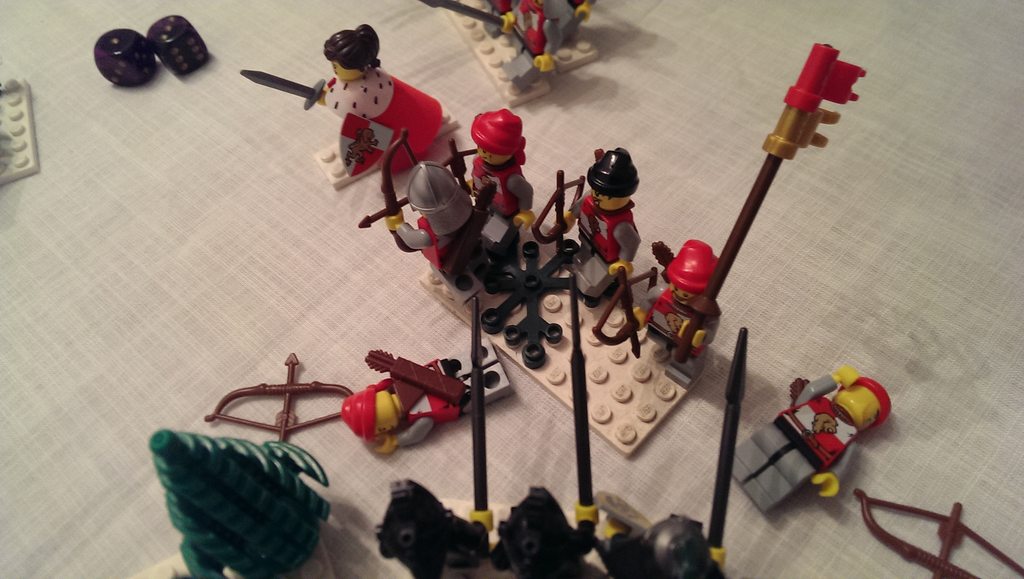 Charging the achers yield excellent results, as they ready their daggers to face the onslaught. Spears thrust into the poor men, slaying 2 of the archers. 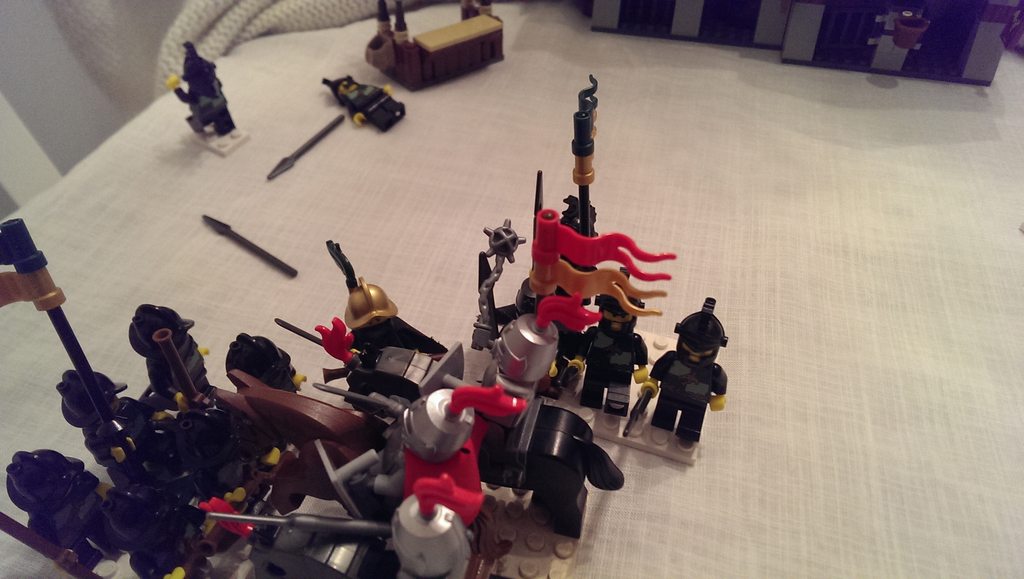 Squad on handgunners try to dagger up the Knights, dealing zero damage! Messer shoots his handgun and attacks the Knights ( he has 5x melee attacks with his sword), dealing no wounds. Spearmen apparently follow the lead and deal no wounds at all. 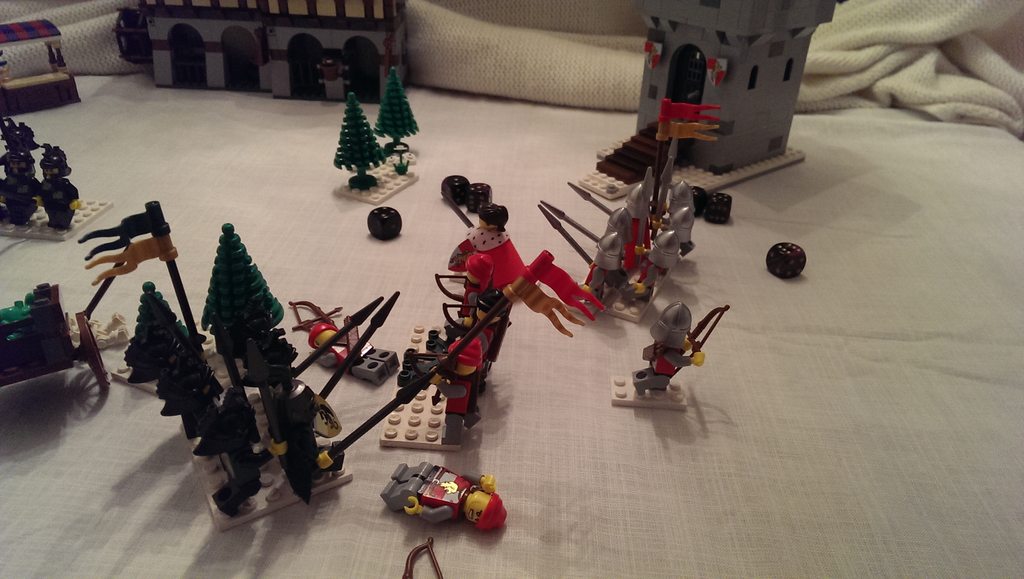 State Archers took losses, and even their leader present. They failed their bravery check and therefore one of the archers abandons the battle! 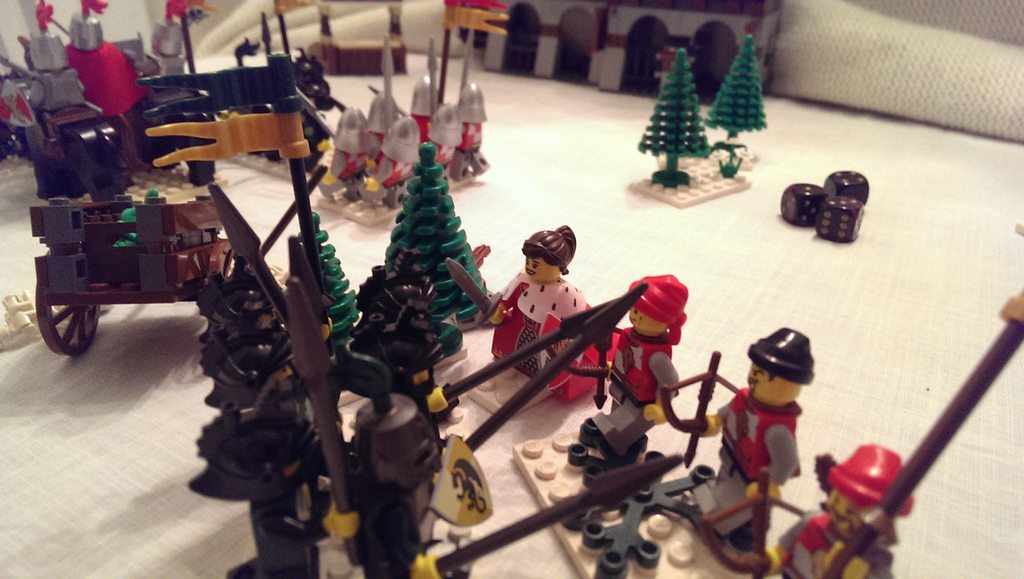 Lady Heidi uses her presence to inspire the archers so that they will hold the line!
Being a powerful swordsman and a leader, she swings her sword towards the spearmen. Bringing doom to 2 souls.
Archers try to desperately shank the enemy with their daggers, just scratching their armor. 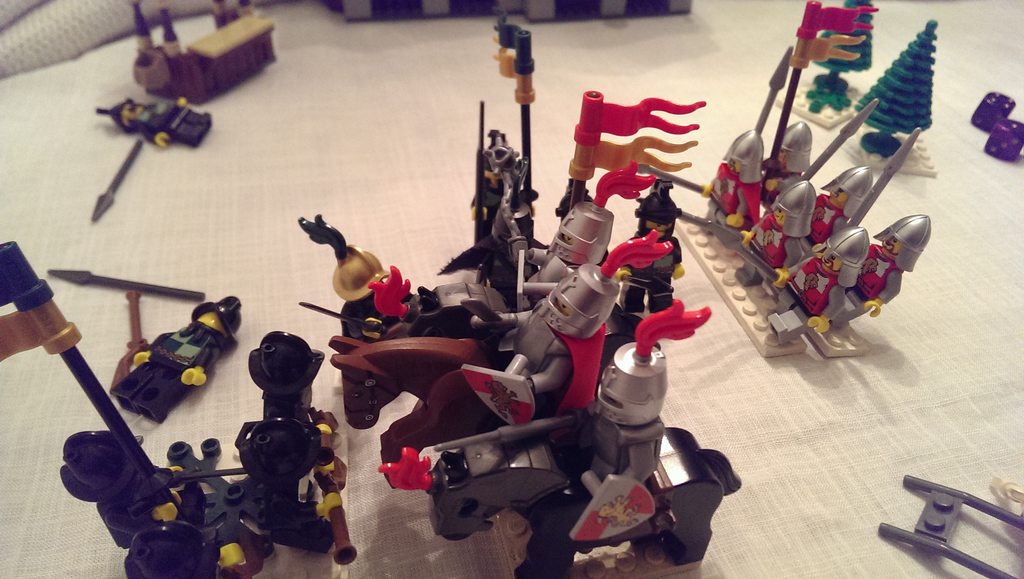 Knights strike the gunners, killing 2 men.
State spearmen flank the enemy equivalent, but are unable to damage them. 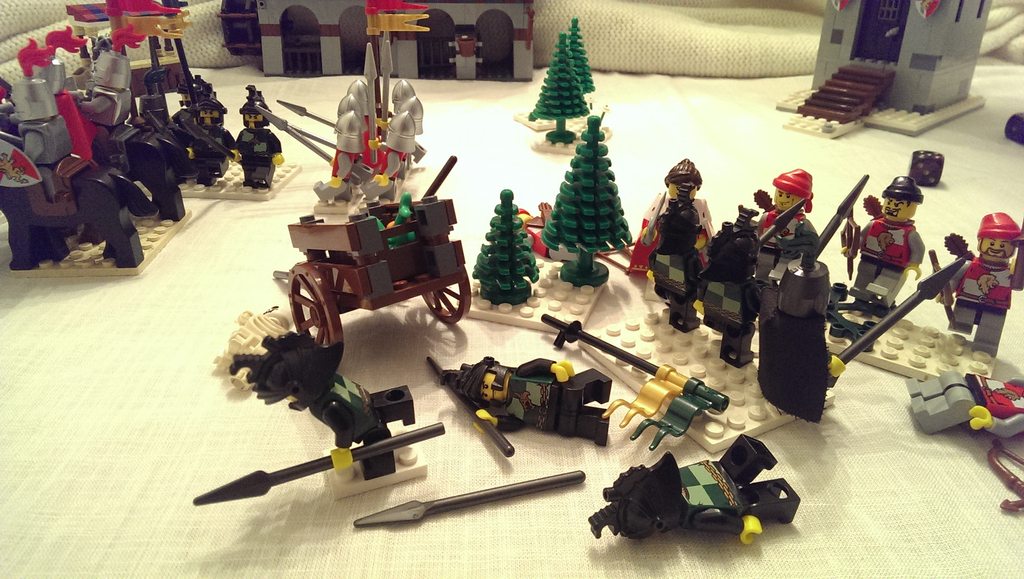 Being so far apart from the rest of the army, and having suffered casualities. The standard bearer flees his squad, frightened by the beautiful but deadly leader of the townsfolk.

Spearmen are in a big trouble, archers strenghtened by their leader. Keep holding the ground, taking no wounds! 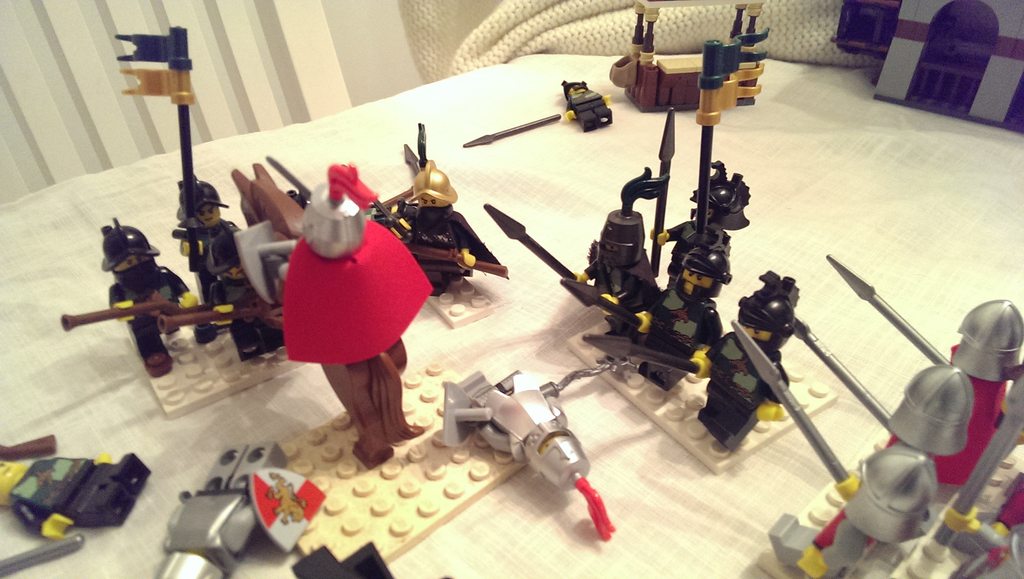 Gunners, angried with the loss of 2 comrades. Slice one of the knights from head to toe! Messer shooting his musket, throwing one of the Knights off from saddle. Incapacitated Messer punctures the Knights heart with his sword. The fight starts to turn in to the attackers favour! Spearmen hold their ground and will try to fend off the state troops next turn.


End of GREEN turn 2
Handgunners take the bravery test, passing it with Kaptain Messer fighting at their side! 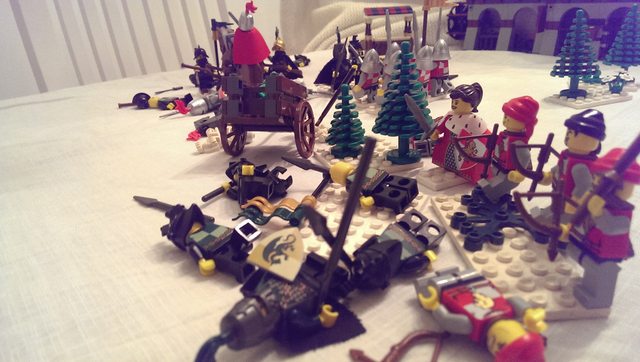 Unbelievable! Heidi with her state archers sends the enemy spearmen flying! Kaptain Messer starts to panic, having lost half of his forces and the enemy archers now free to start raining arrows at them. 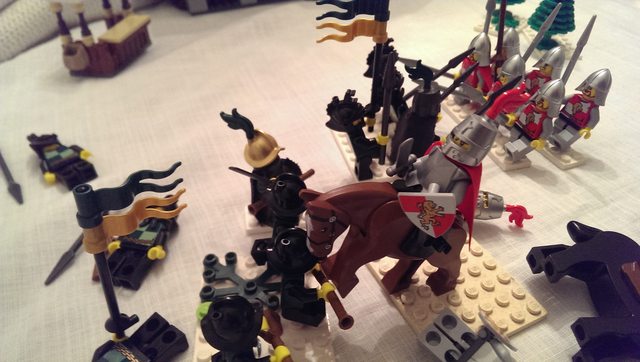 The remaining nobleman strikes a single handgunner down. 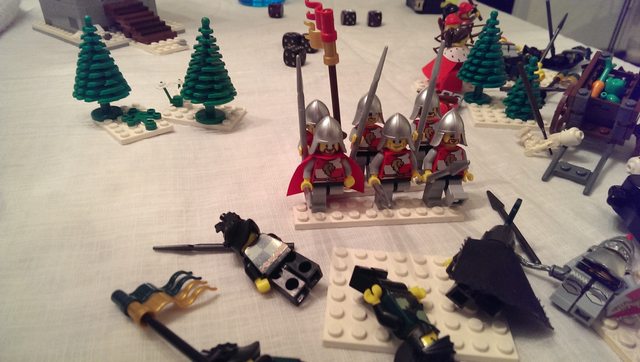 Start of turn 3 GREEN
Even the noblest of men succumb to the darkness... 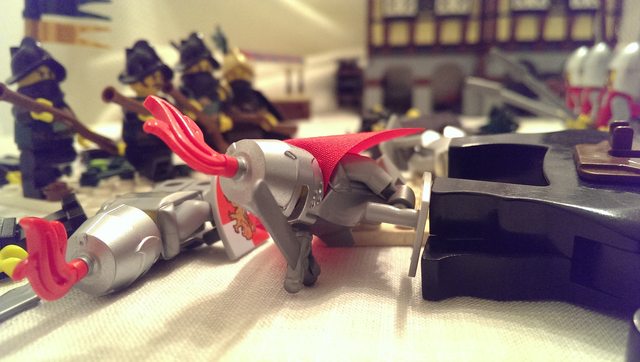 Kaptain Messer, desperate at the strange turn of tide against them. Uses his "Retreat Tactics" on the remaining handgunners. Gunners leap back from melee, and fire towards the knight. Killing him. 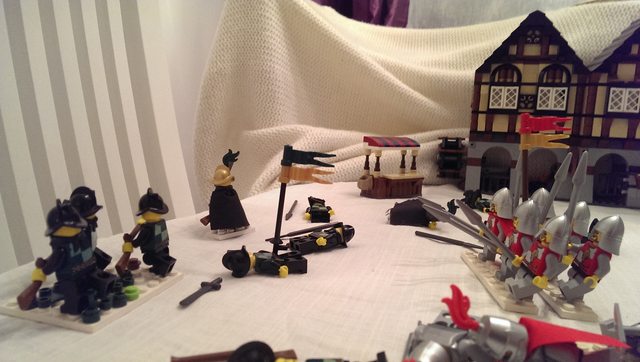 Still facing impossible odds, Kaptain Messer orders his troops to withdraw from the battle. And swears that he wont be fooled by the dice next time!

That was a nice read.
I like the way you wrote what was going on, I should probably work on the way I write
my battles, in stead of saying:"Here, a guy got shot".
Phalek empire, S.P.A., Belgïe, My claim to not being a shitbuilder.

This was nice! More blood and dismemberment is my critique.

Just curious what rules do you use for moral? i really like it and would be really interested in using it.
My Factions/My Battles/My Painting and Modelling Adventures
A mind without purpose will wander in dark places
Top

Well, if you really want some criticism...

I'm afraid, apart from scattering red plates or transparent red plates over dead minifigs, that I can't really find
anything negative to say about this; The Photos weren't blurry(As far as I can tell), the armies looked good and the story was well written.
If I was a judge, you'd get a pretty high score from me.
Phalek empire, S.P.A., Belgïe, My claim to not being a shitbuilder.

bann154 wrote:Just curious what rules do you use for moral? i really like it and would be really interested in using it.

Whenever a squad that was not affected by "Inspiring Leader", had to do a "bravery" check. Each regiment of units have their own bravery stat, for example the Knights had Bravery of 7, and the spearmen had a bravery of 5.
When a squad lost a unit during a turn, it had to do a bravery check at the end of said turn. And rolling D6 you have to get the same or lower number than what your bravery is to pass the check. But, all members lost from the squad the same turn lower your bravery with the number of members lost.

Example:
I lose 2 men from 6 man squad, their bravery is stat is 5.
Their bravery is lowered to 3, therefore I need to roll 1,2,3 in order to pass the check. Or else one of the remaining soldiers will leave the battle in panic. (This only affects the bravery check, next turn their bravery is back at full 5)

But, I found that in such a small scale battle. It had a huge impact, so I figured I will start using D20 bravery system. And squad with 5 bravery, would have 15 bravery in this new system. (bravery X 3)
This is a more realistic way in my opinion, instead of constantly losing manpower from low bravery squads. But still being a random factor in the gameplay.

I took the system from Warhammer - Age of Sigmar ruleset, but more testing is needed so I can modify it to be to my liking.
My Flickr
Top

This was an awesome battle, man. Definitely a big fan of your writing as well!

I'm not a fan of the whole Bravery thing, but I didn't let that affect my score because that's how you chose to play the game. The biggest problem with the system to me is that it almost forces the heroes to use feats to prevent retreating from happening, which takes away from a battle and really the spirit and silliness that Brikwars encourages. The lack of any real creative heroic feats or attempts at feats did detract from your score a bit.

The lack of blood was a minus as well. Normally a battle that gets posted in the Reports From the Field forum doesn't really need it, but in a competition like this one, blood can make a battle stand out from the rest. In a similar vein, although your pictures had fairly good lighting and weren't blurry, the scenes depicted could have used some improvement. Oftentimes, it was difficult to see what was actually going on in the scene. When someone gets killed or cut in half, I expect an action shot of that action happening. This is very similar to the blood critique. Normally, a battle posted here doesn't really need any dressing up to be good, but in a competition like this it sets your battle apart from the rest when the minifigs get posed well.

If you are interested in looking at a great example of what I mean in these critiques, Zombie Zulu Dawn by Warhead is a prime example of these things in action. Read it. Read it again. Then read it a third time. I still study this battle from time to time to see how I can improve my battle reports.

Kommander Ken's Halloween Hellhunt winning battle is another great example of what I mean in these critiques as well. His battle is much closer to yours in format, so it would be good to compare yours to his. Ken makes great use of close up shots and different camera angles to really showcase what's going on in the battle and his use of blood and action shots were terrific.

You seem to have the gameplay down, so once you get more experience in posting reports I think you are going to have some good reads. Cheers.

First off, this is great, especially for the first time. My biggest critique, as zipping and I said above, is lack of blood. Midevo battles should be full of blood and carnage as hammers smash skulls, swords free limbs from the body, arrows puncture the torso, you get the idea. Where in scifi you can throw effects into beam cannons, teleportation devices, ect, Medivo can really stand out in these bloody melee inflicted effects.

I would also love to see more pictures and a variety of angels, but the pictures you did present were very clean.

I thought your writing and story were great, it definitely gives a sense of it being apart of a larger conflict with depths of backstory waiting to be uncovered.

Overall, I liked it.

I have to second Zupponn's advice.
Top

Cheers everyone for taking the time to read my report. I will absorb all the feedback and hopefully that will make my future reports even more interesting!
My Flickr
Top
Post Reply
13 posts • Page 1 of 1