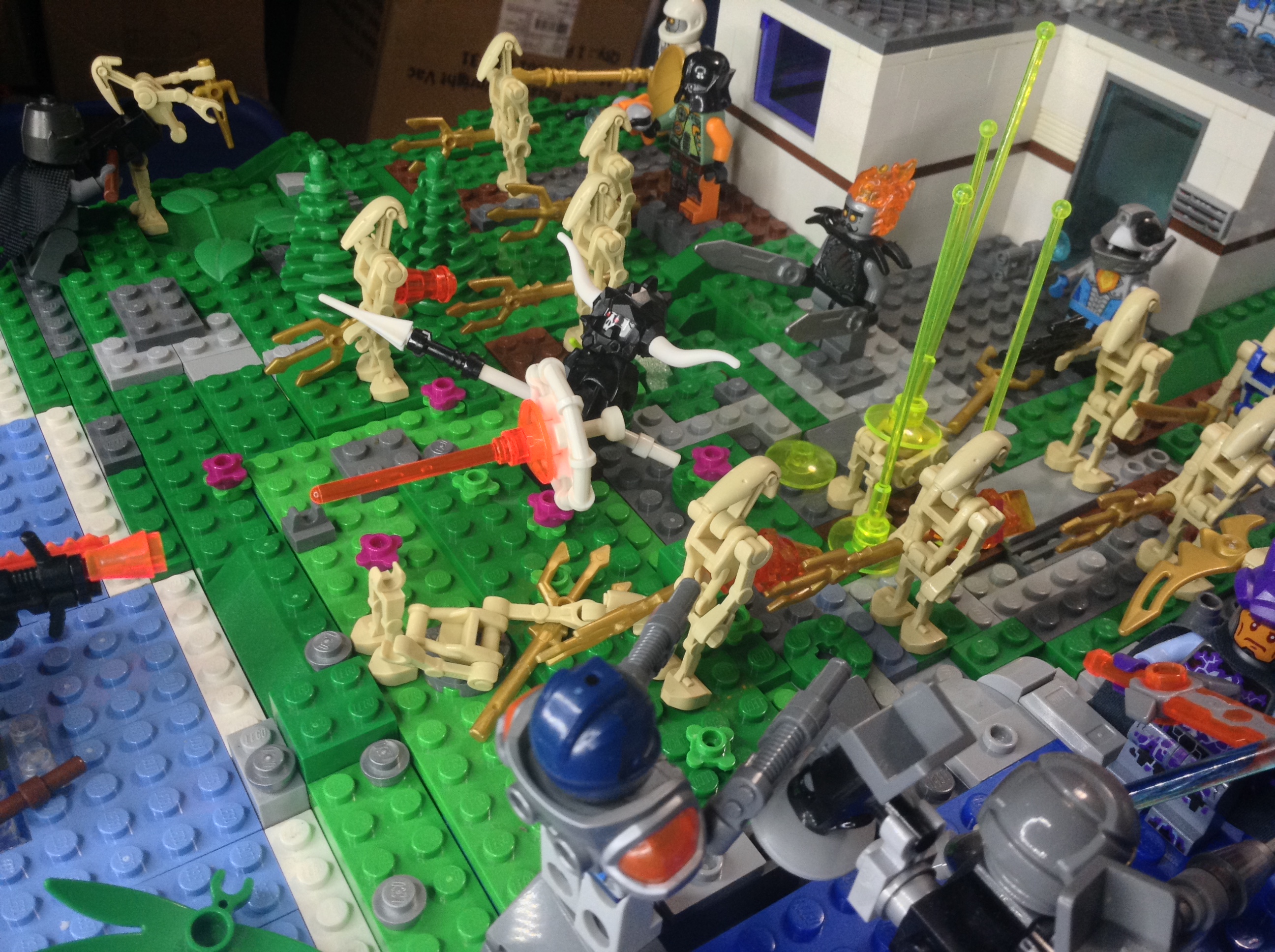 A number of droids are shredded by the heroes' collective gunfire and magik.

These heroes enter the building, hoping to find weapons or supplies, but they won't be seen again in this battle, but will be seen again 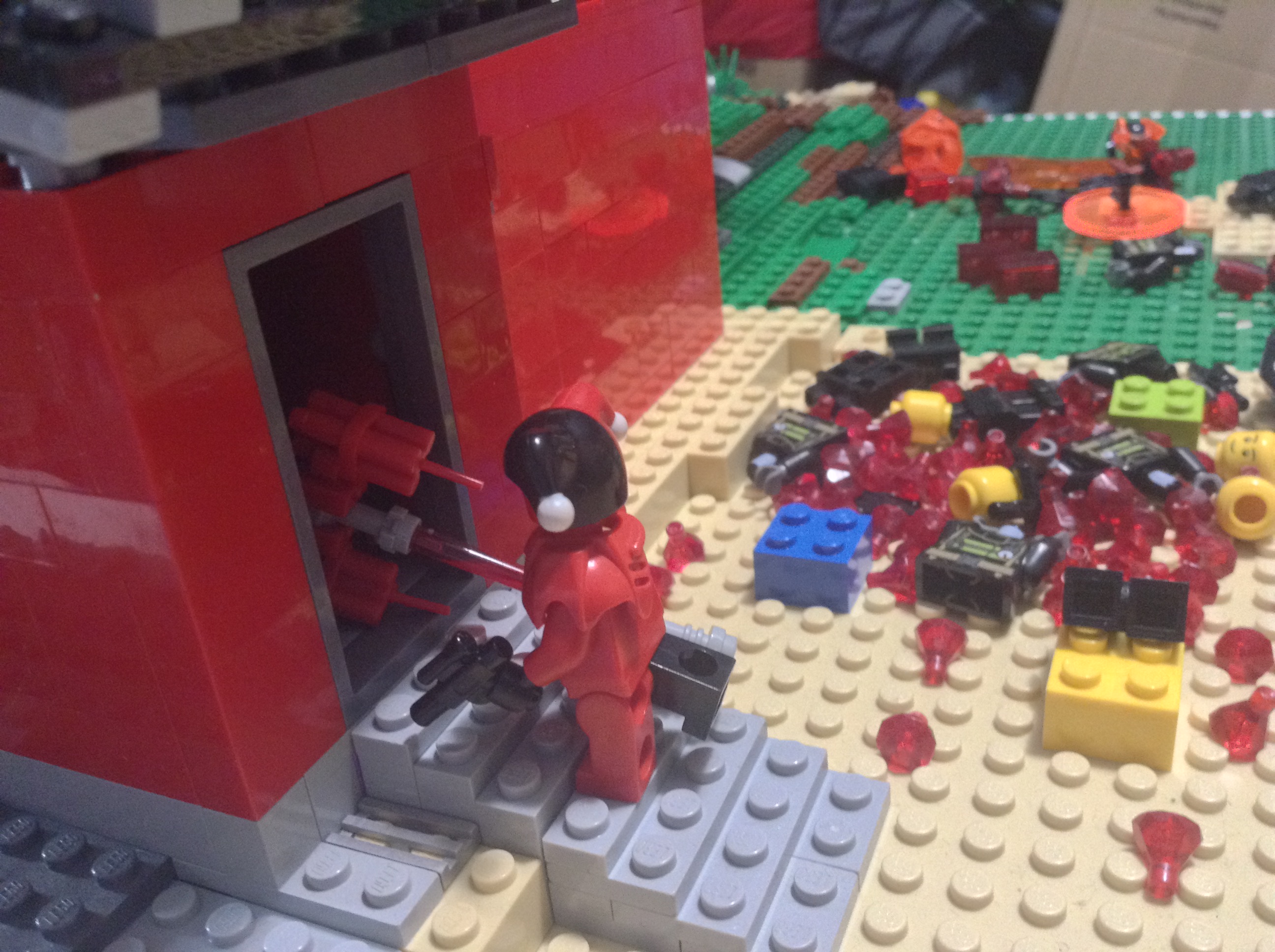 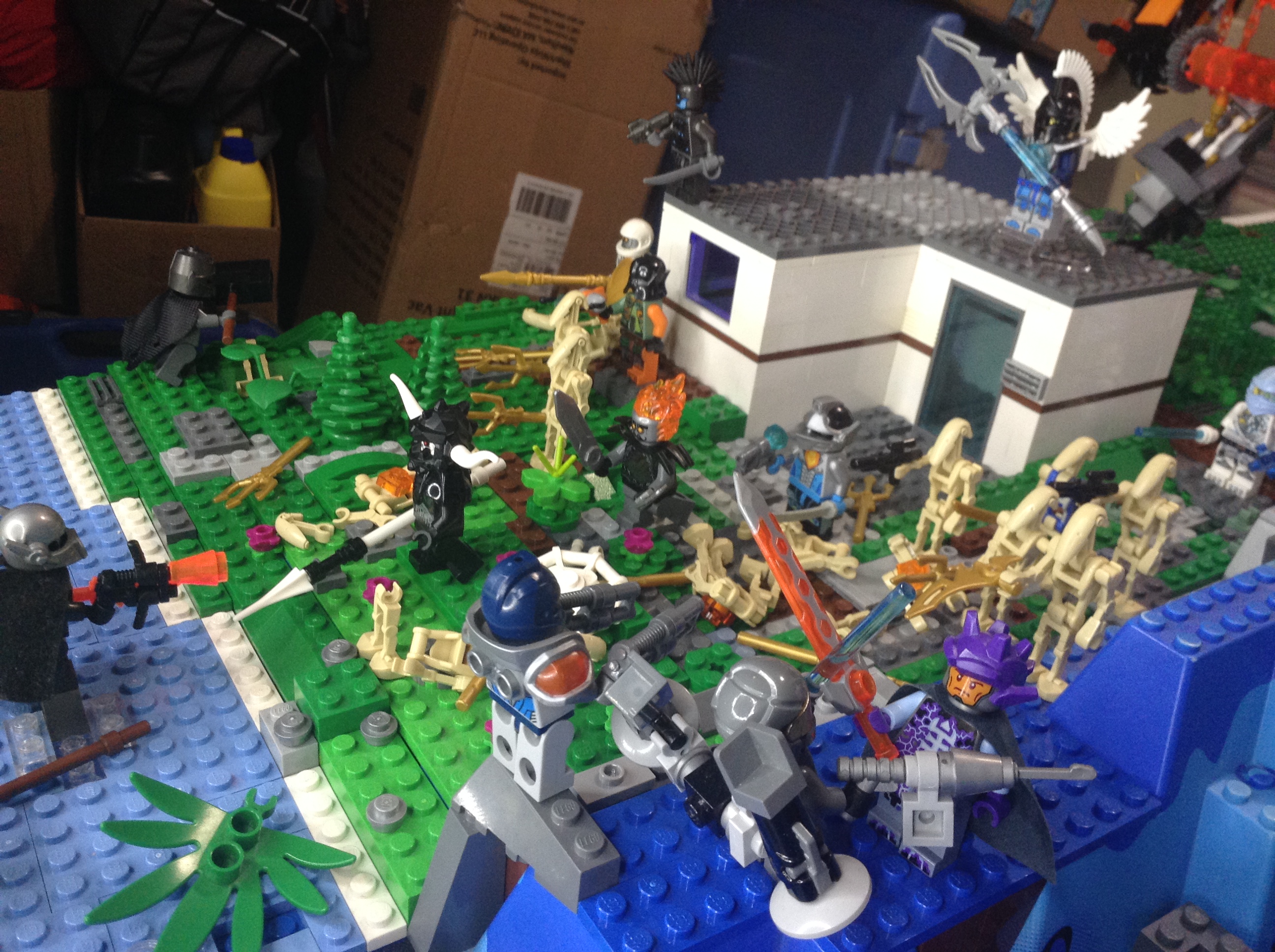 No heroes are hurt, but plot armor is only so thick.

The heroes attack again, scrapping a number of the robots. 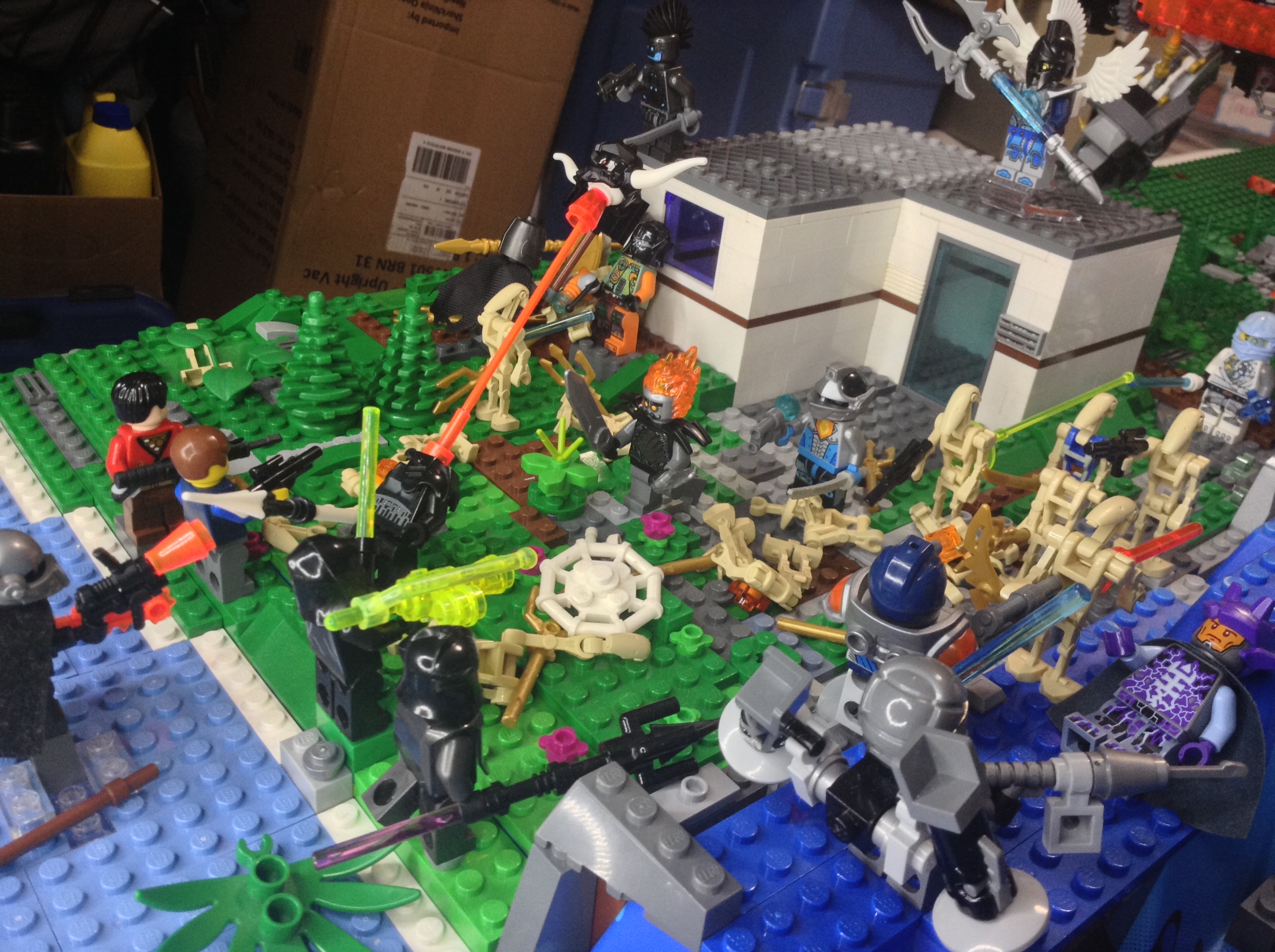 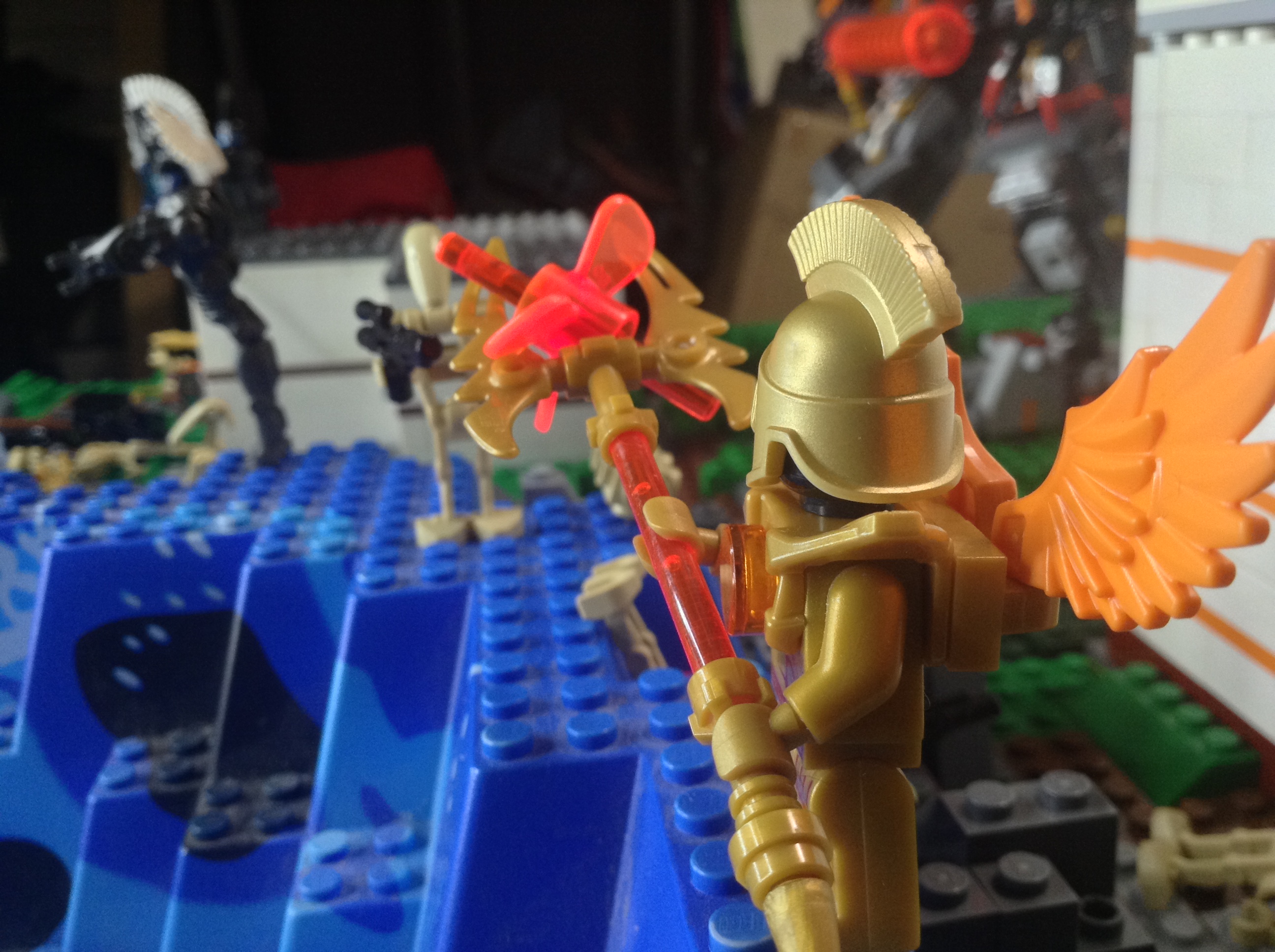 Brikthulu fires off a volley of missiles. 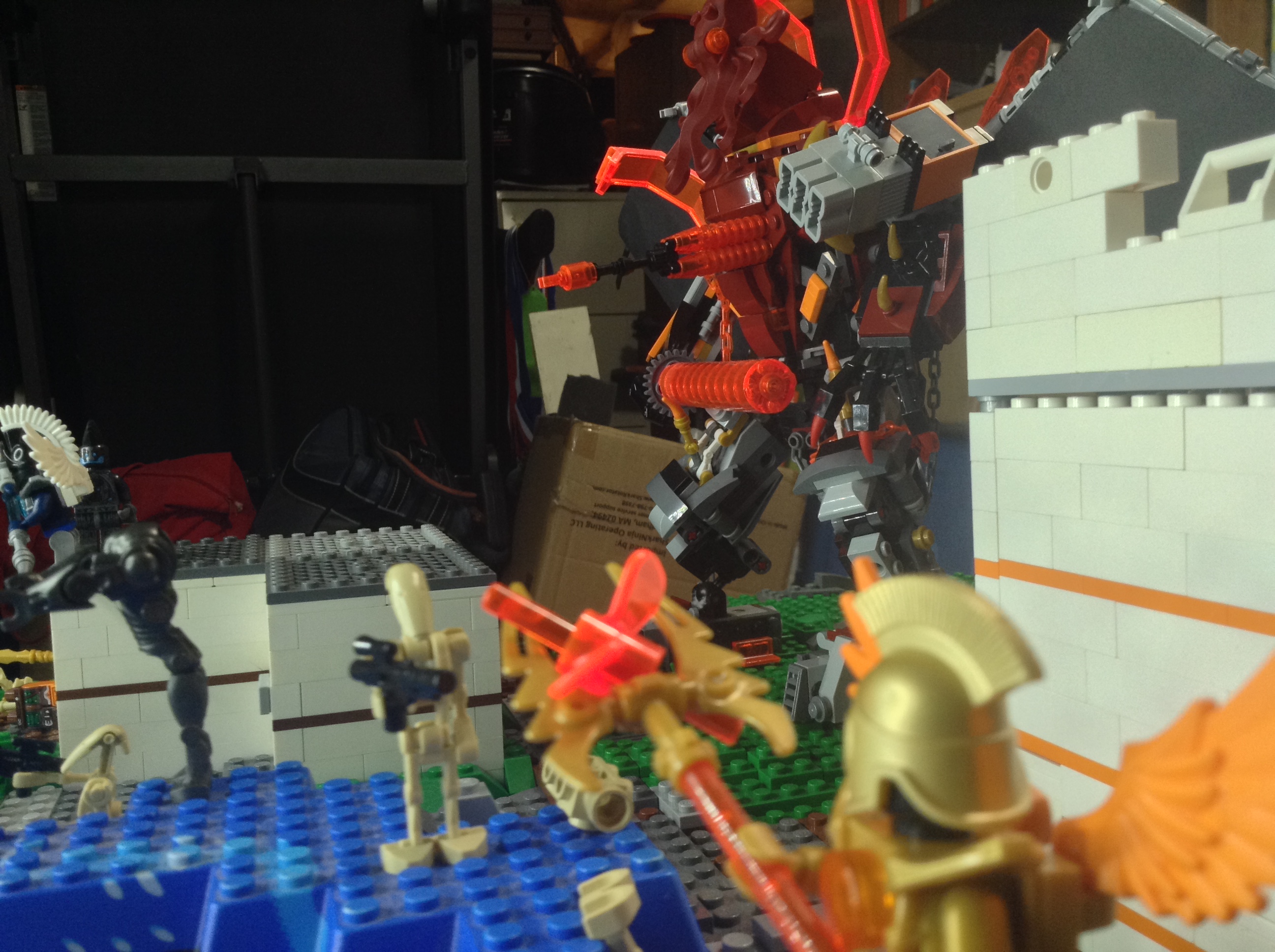 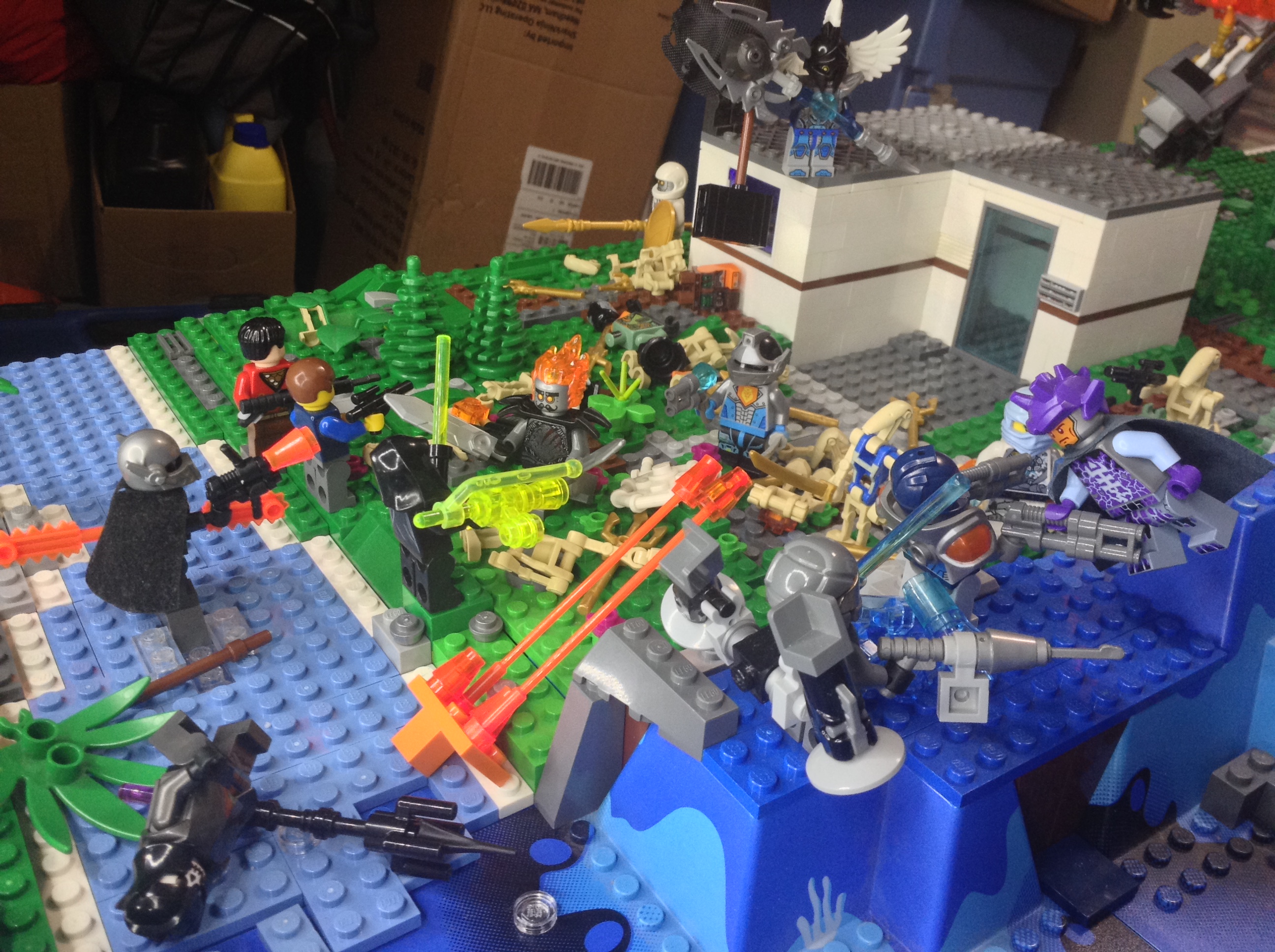 All the while, robot forces make their attacks. But is it enough?

All but a handful of the robot soldiers are destroyed: 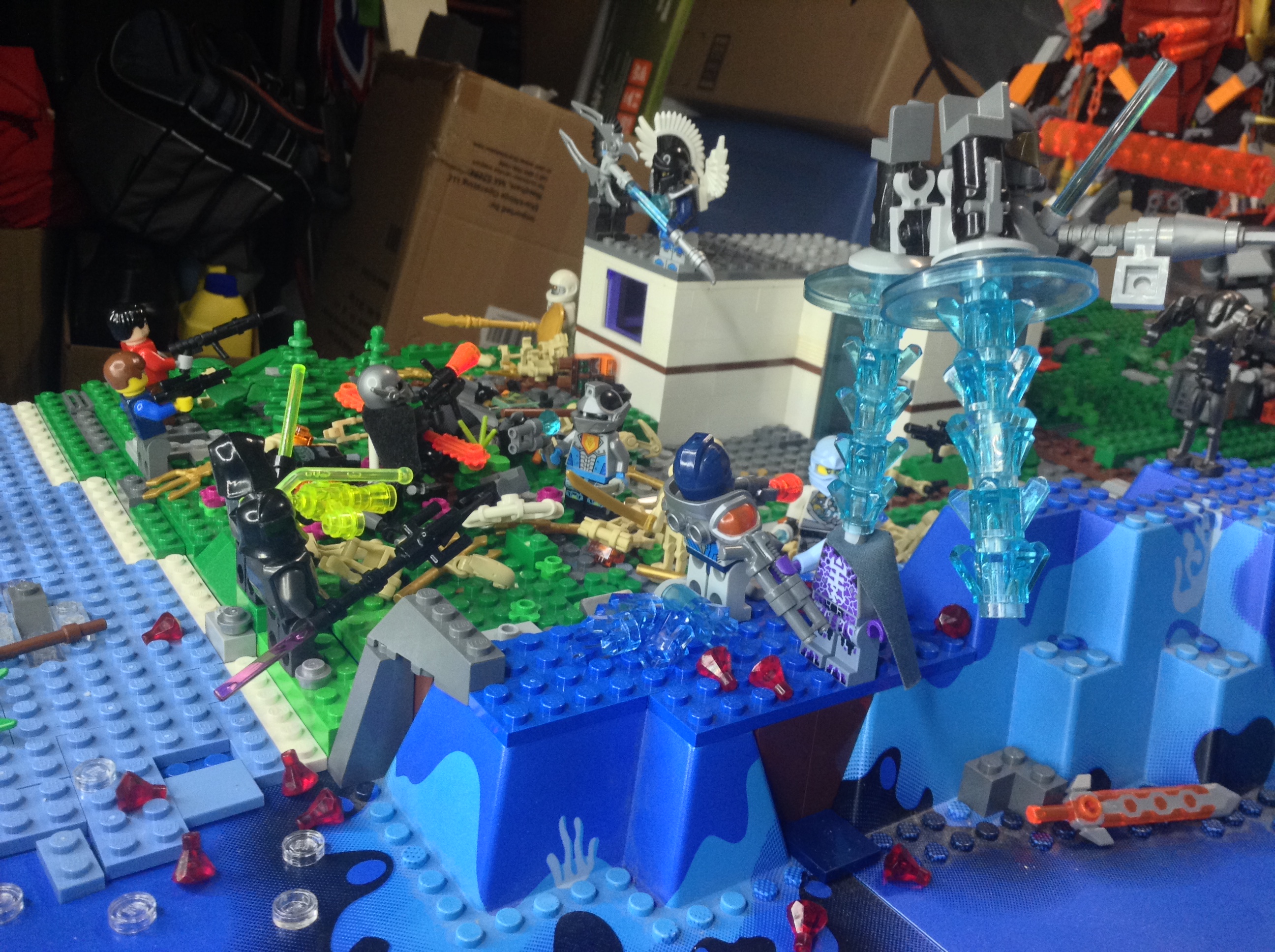 The remaining units converge their attacks on Darkstorm and the Space Repair Garage gang: 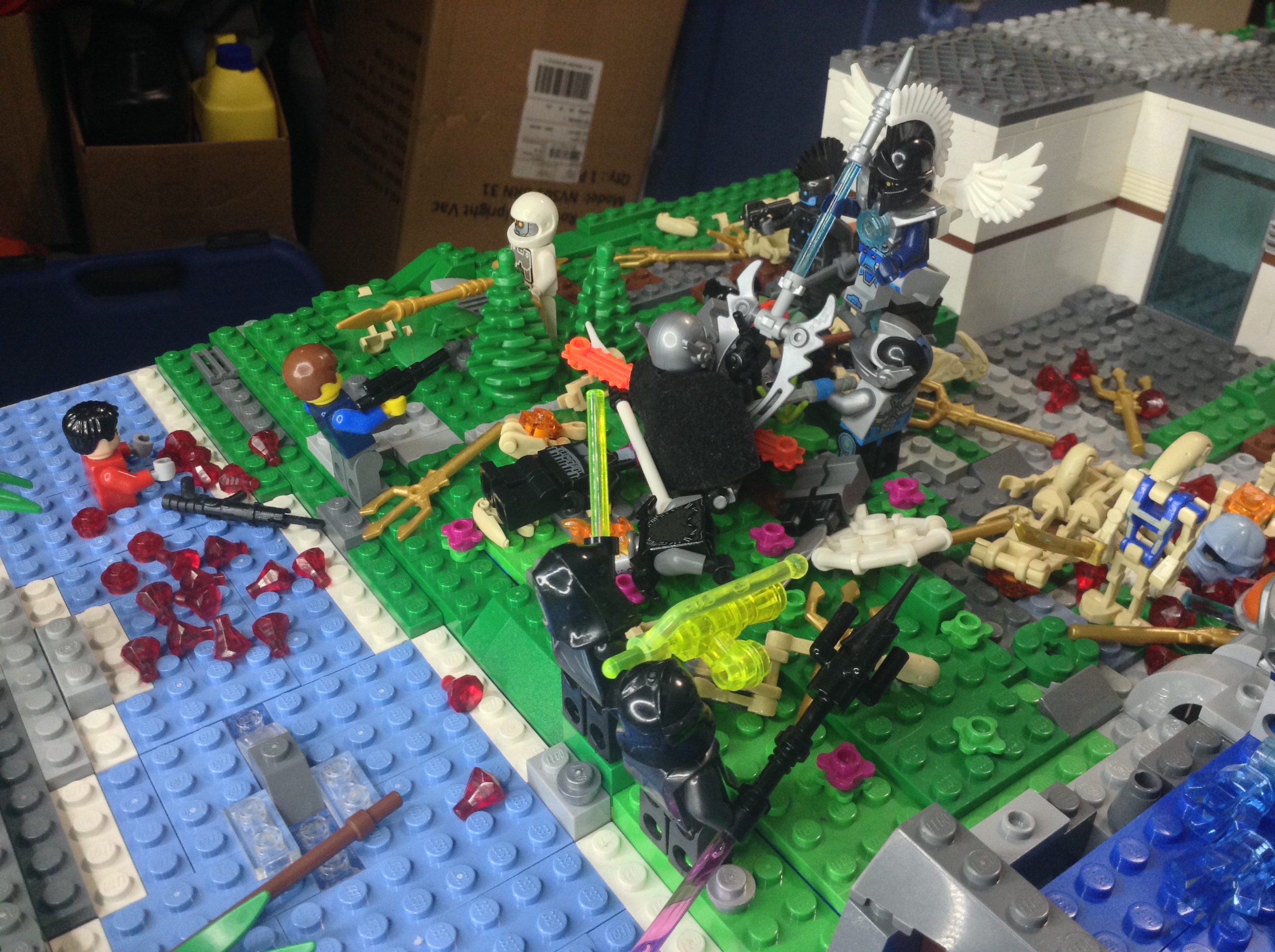 I also got bored a little bit so I had Brikthulu slam his giant OT Sword into the little shelter. It didn't have much resistance. 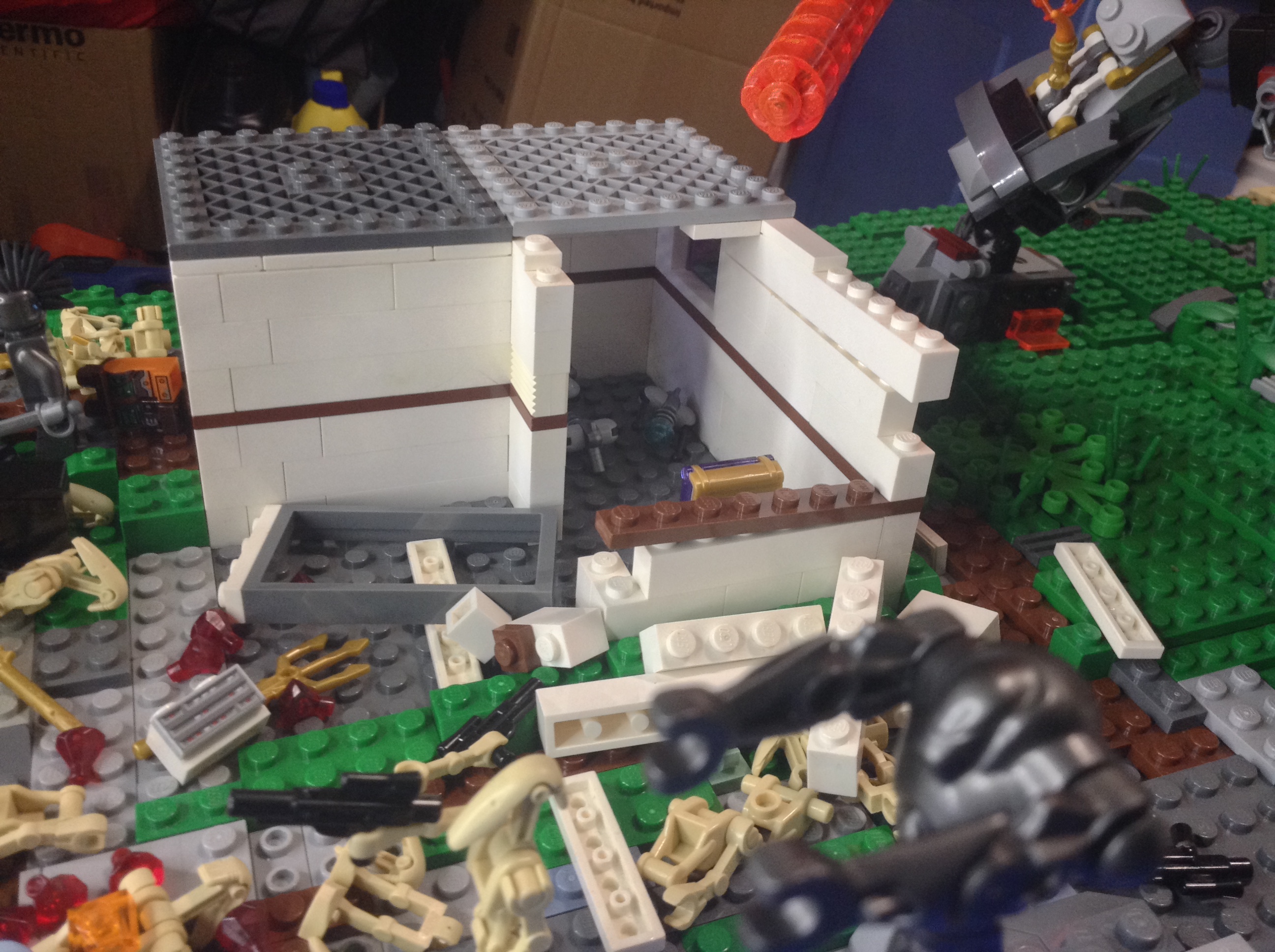 The last of the robots are attacked here. BaalBot is blown to bits by the combined fire from multiple heroes: 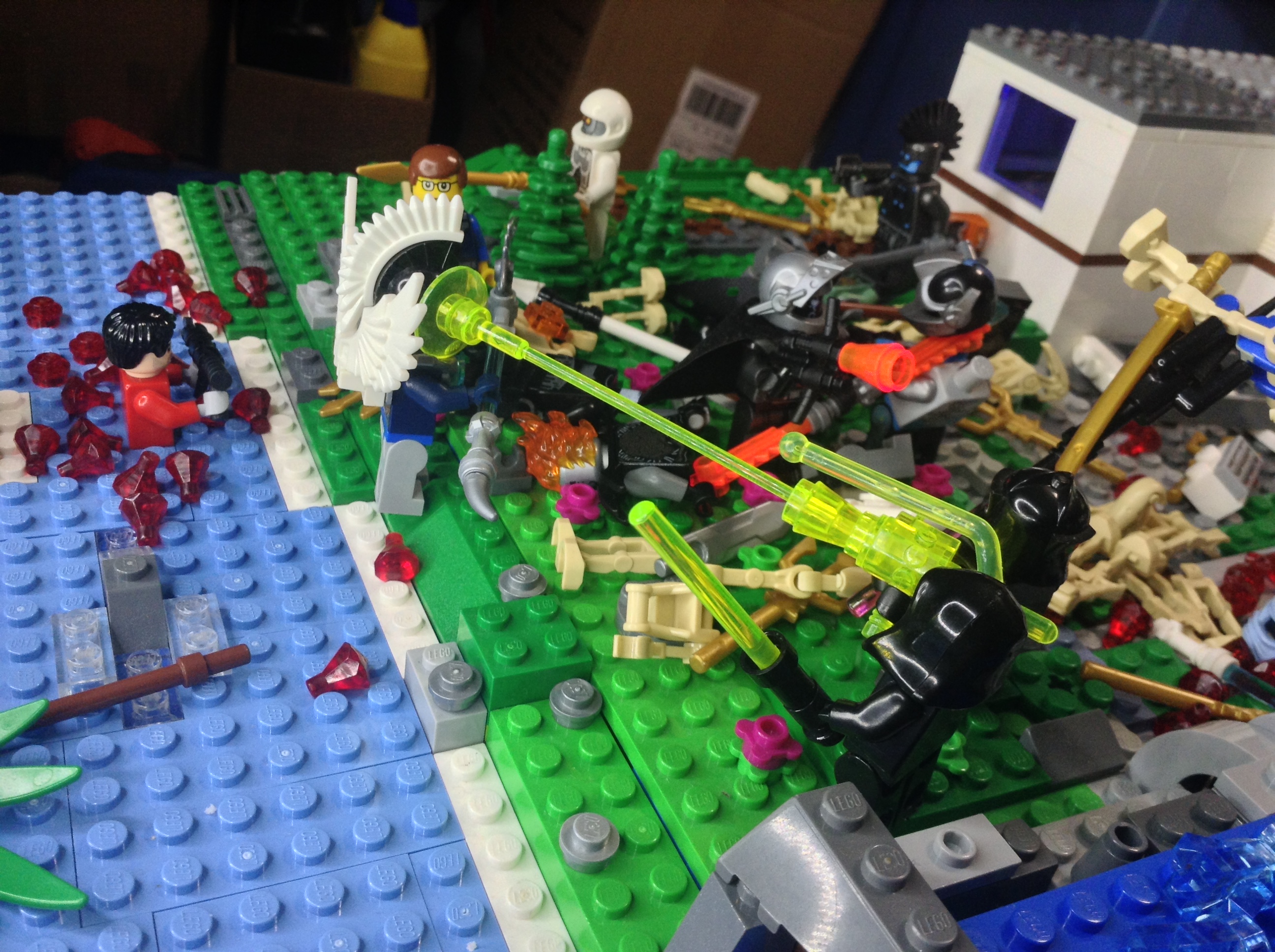 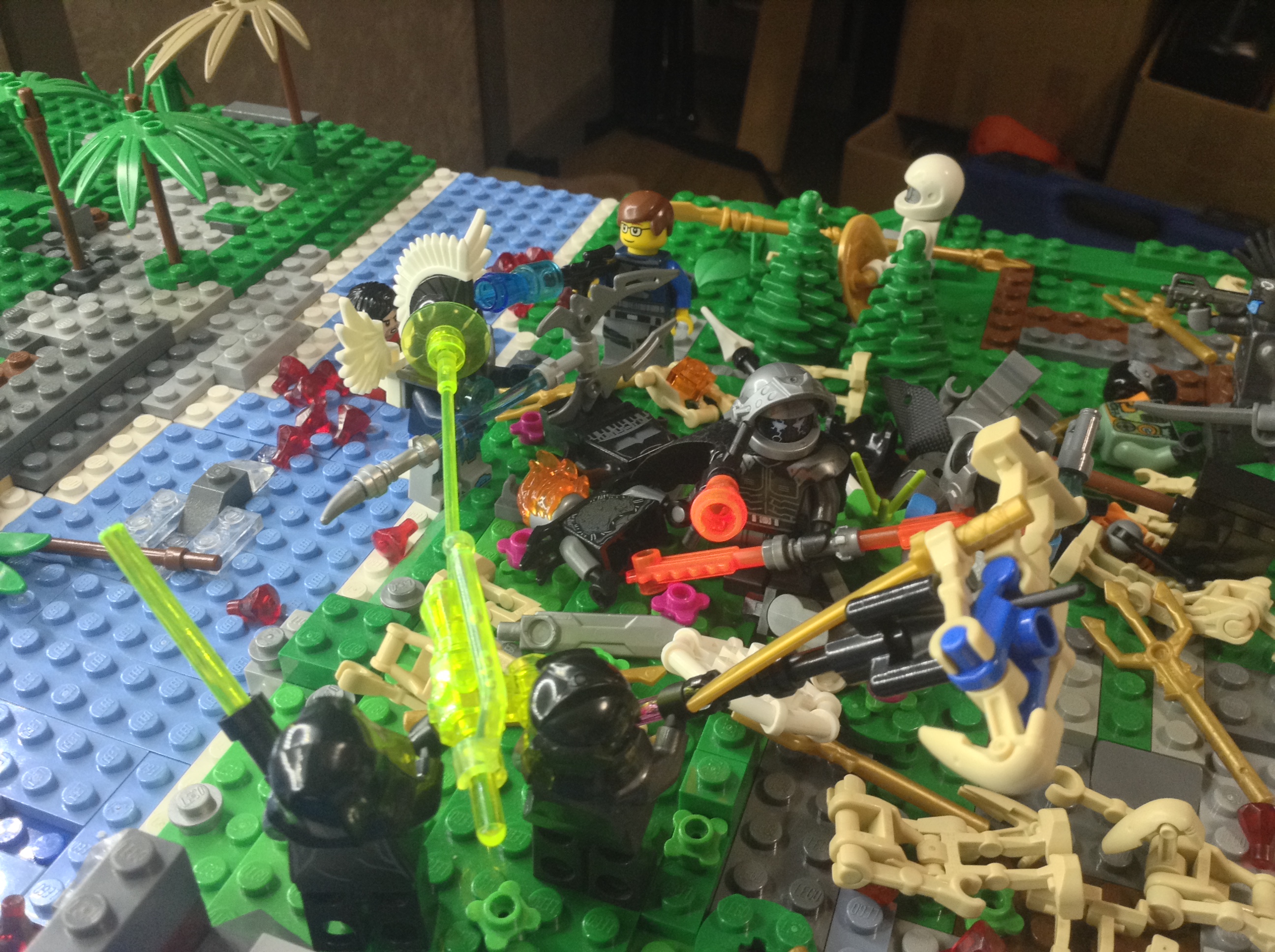 Baal himself flies up to the roof, quite likely to utilize the giant guns laying there. 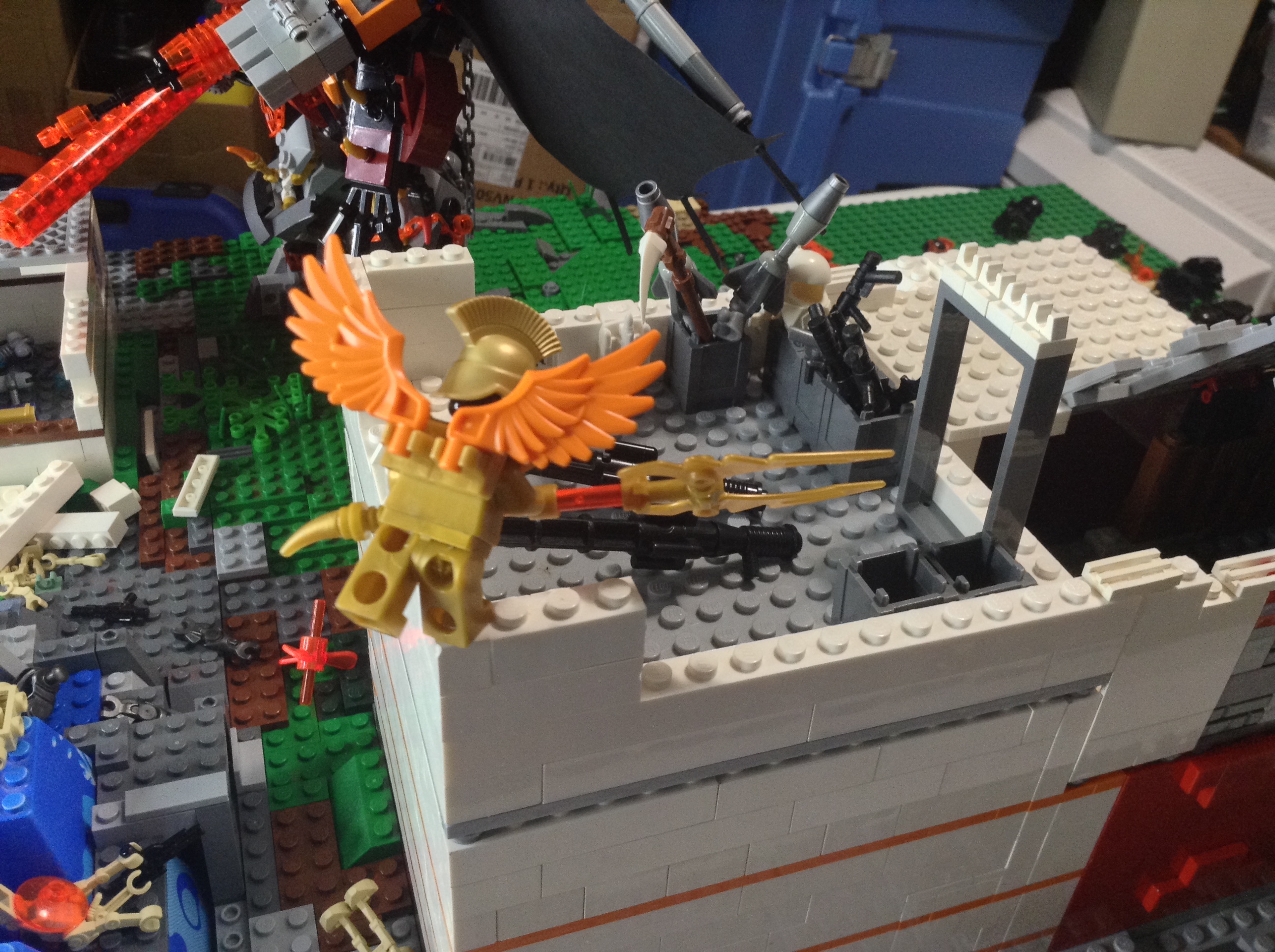 One robot proceeds to impale chives 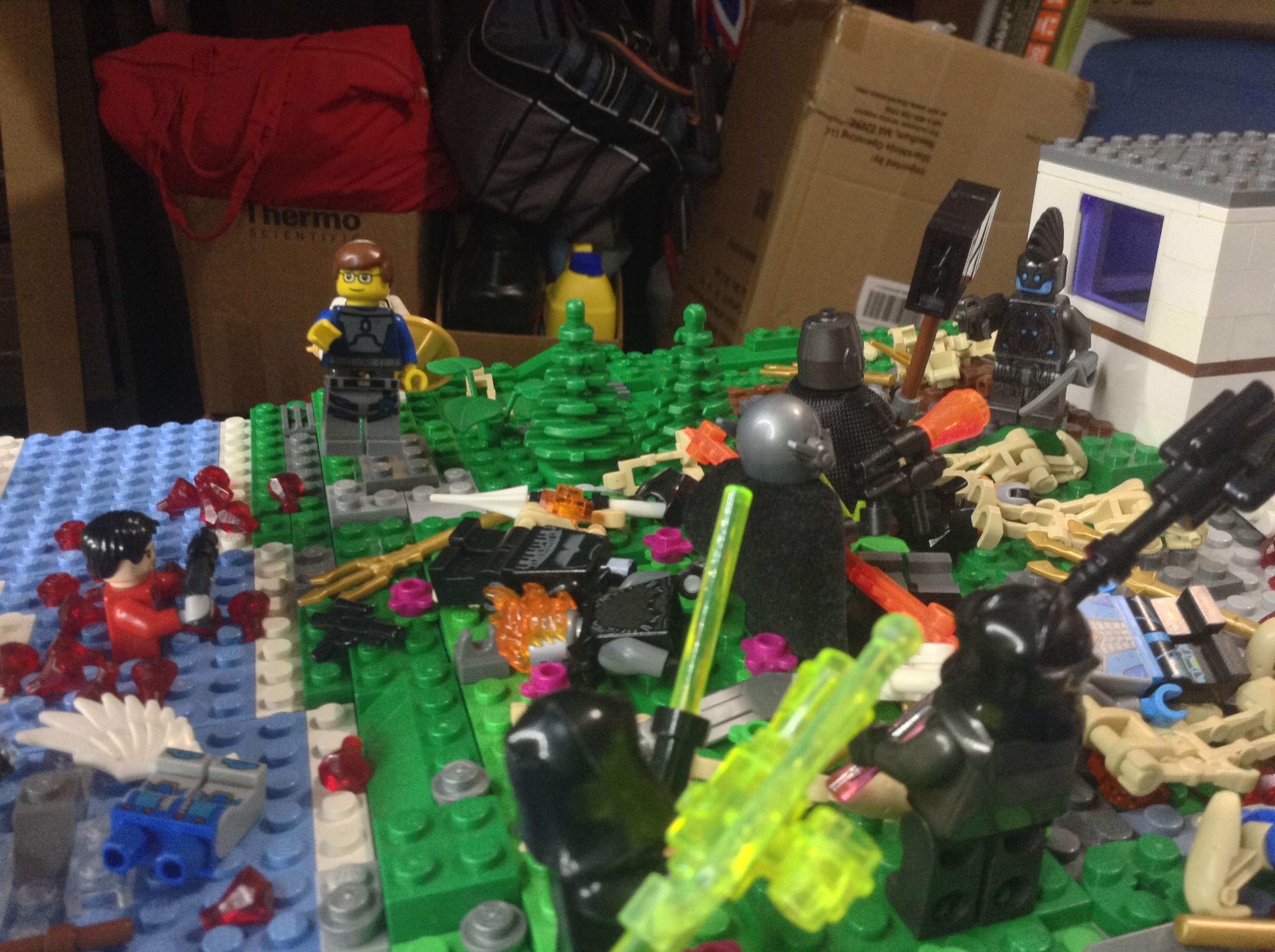 Hammaman isn't going to have it. M0h4wk gets his circuits bashed in. 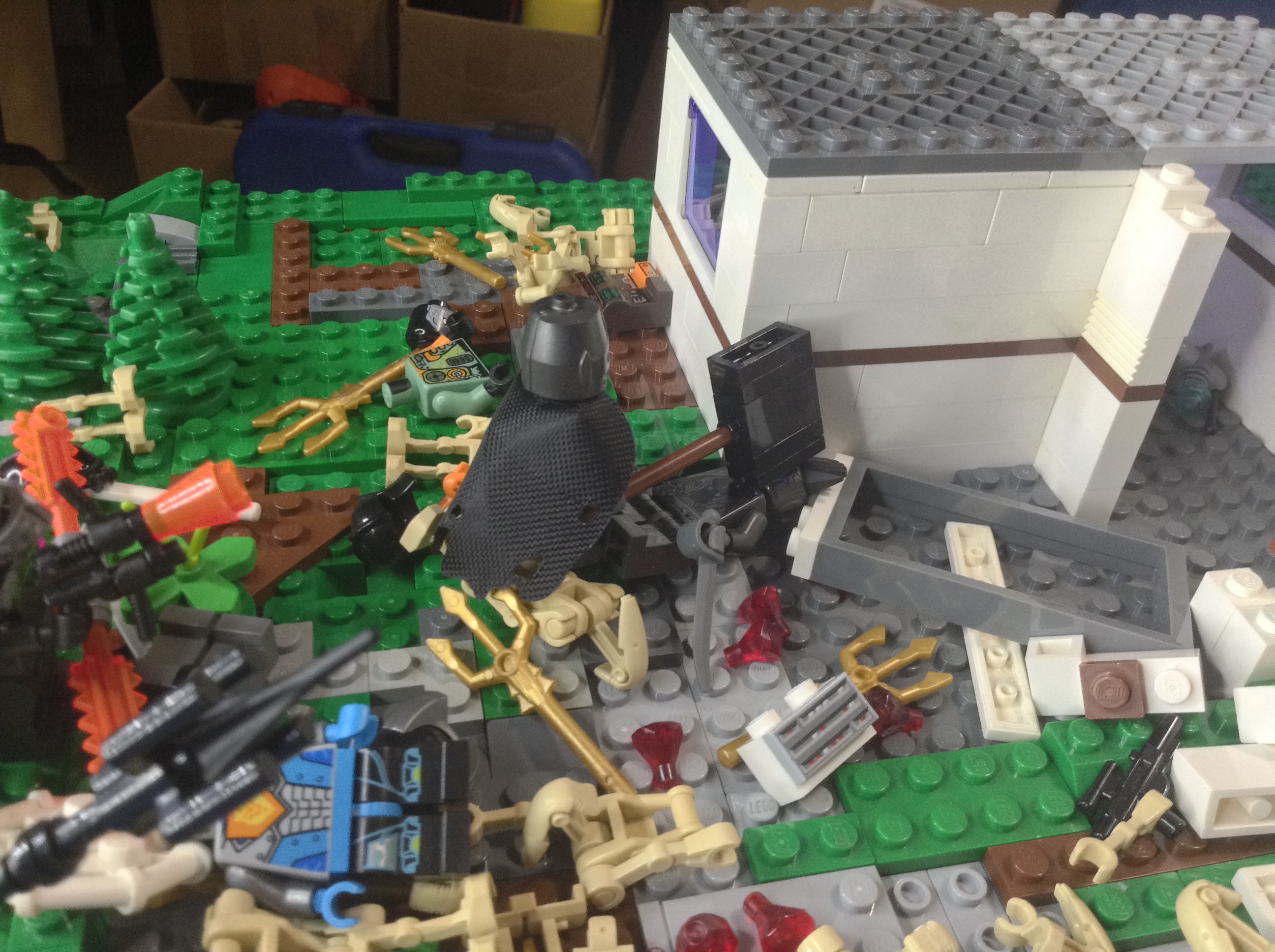 *Impaled noises*
Bigwork crawls from the river and opens fire on the robot, impressively not hitting Chives, who is mostly blocking his fire. Well actually there was a couple hits, but we don't talk about that. I honestly don't know how that man lived through that turn.

But the robot didn't! 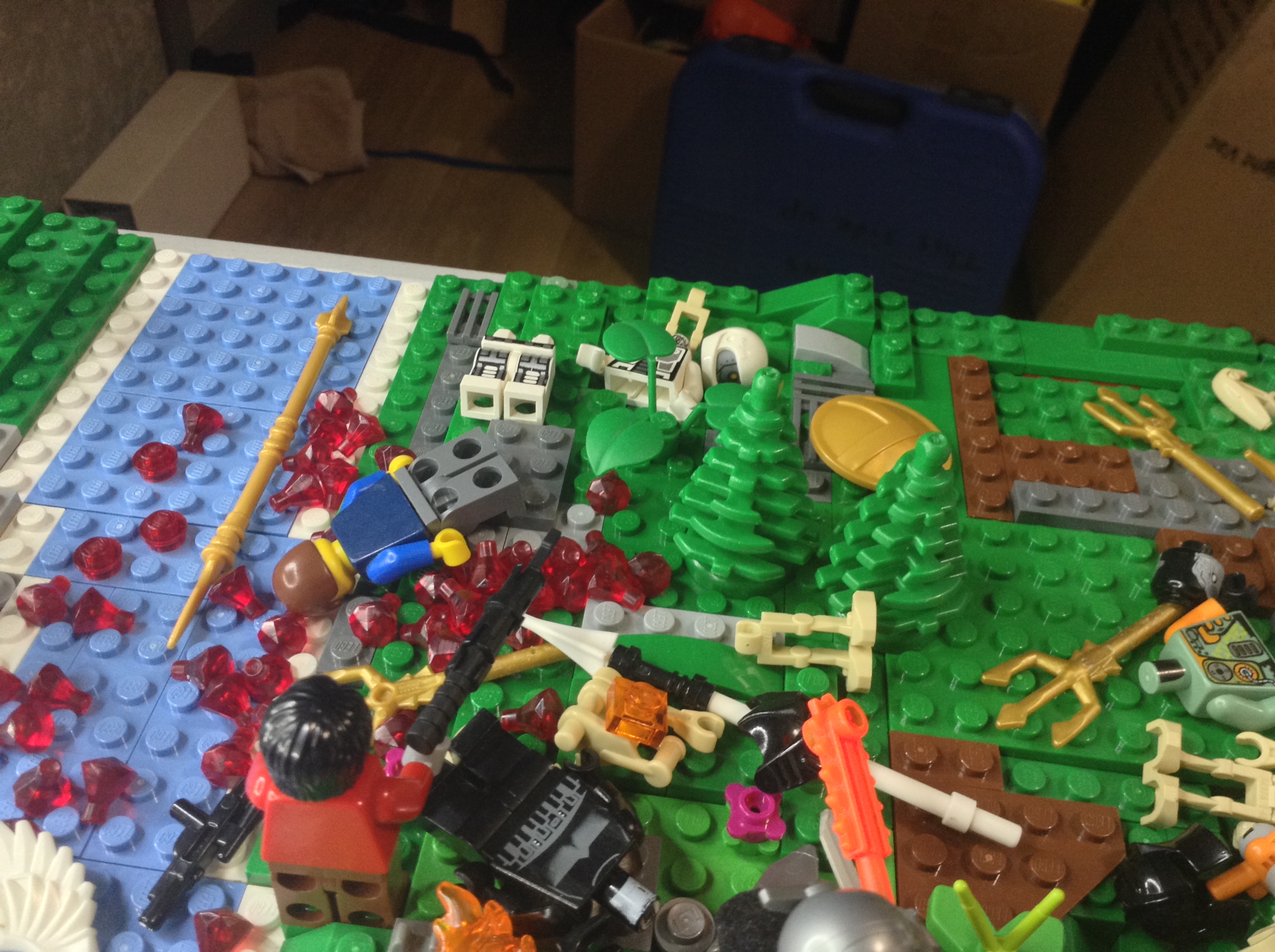 With all of the controlled robotic soldiers dead, the heroes prepare to face Brikthulu.

Brikthulu: *sigh.* How is it you constantly annoy me? It's time to die! 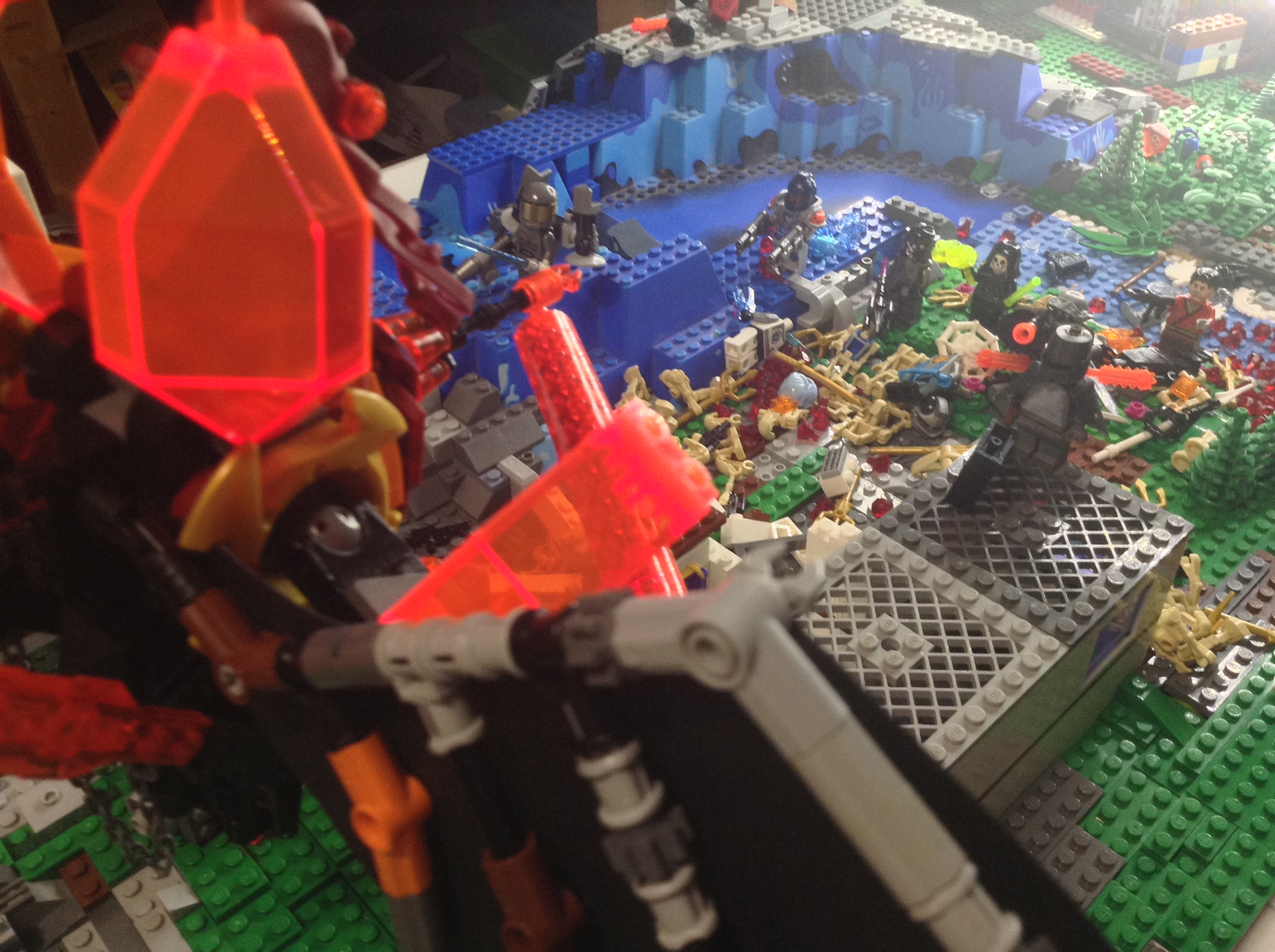 Wait? What are you doing? No, stop that!

The heroes at once unite their powers to fling Hammaman at the Mech, slam his hammer into the Hypernova Sword, reduce the structure level of Brikthulu's mech, and deal spectacular damage to it. 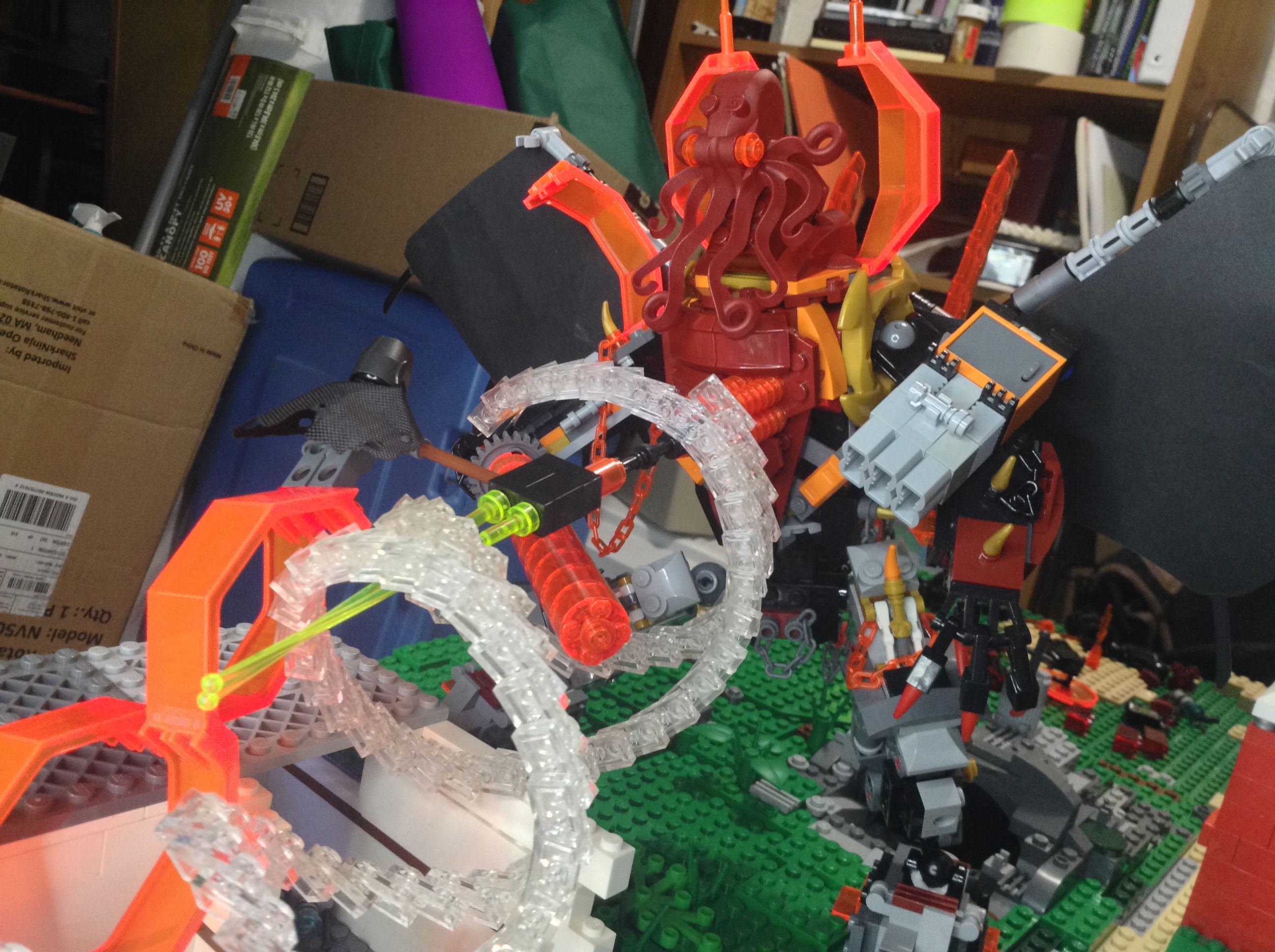 WHAT THE ACTUAL FUCK GUYS? 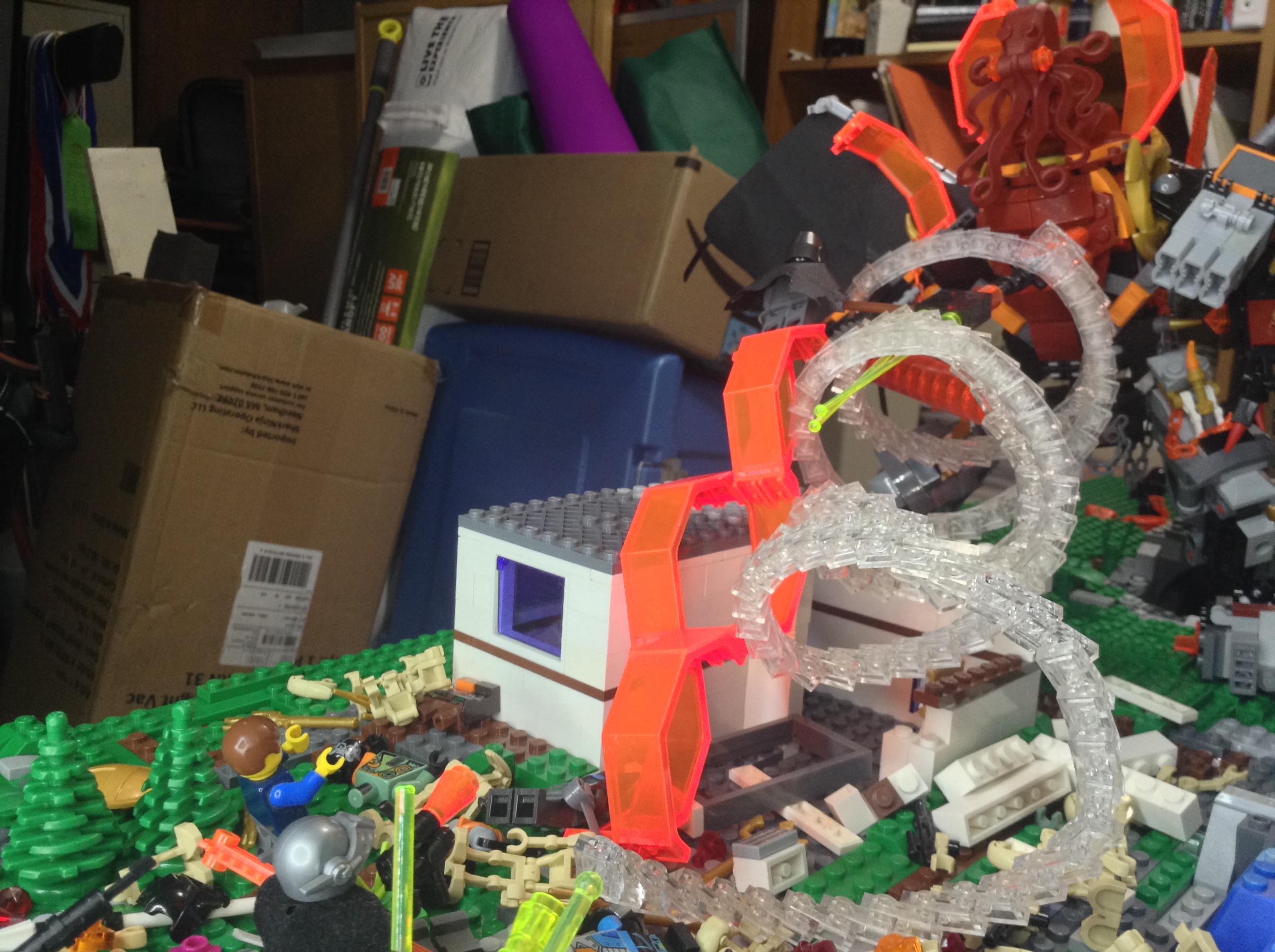 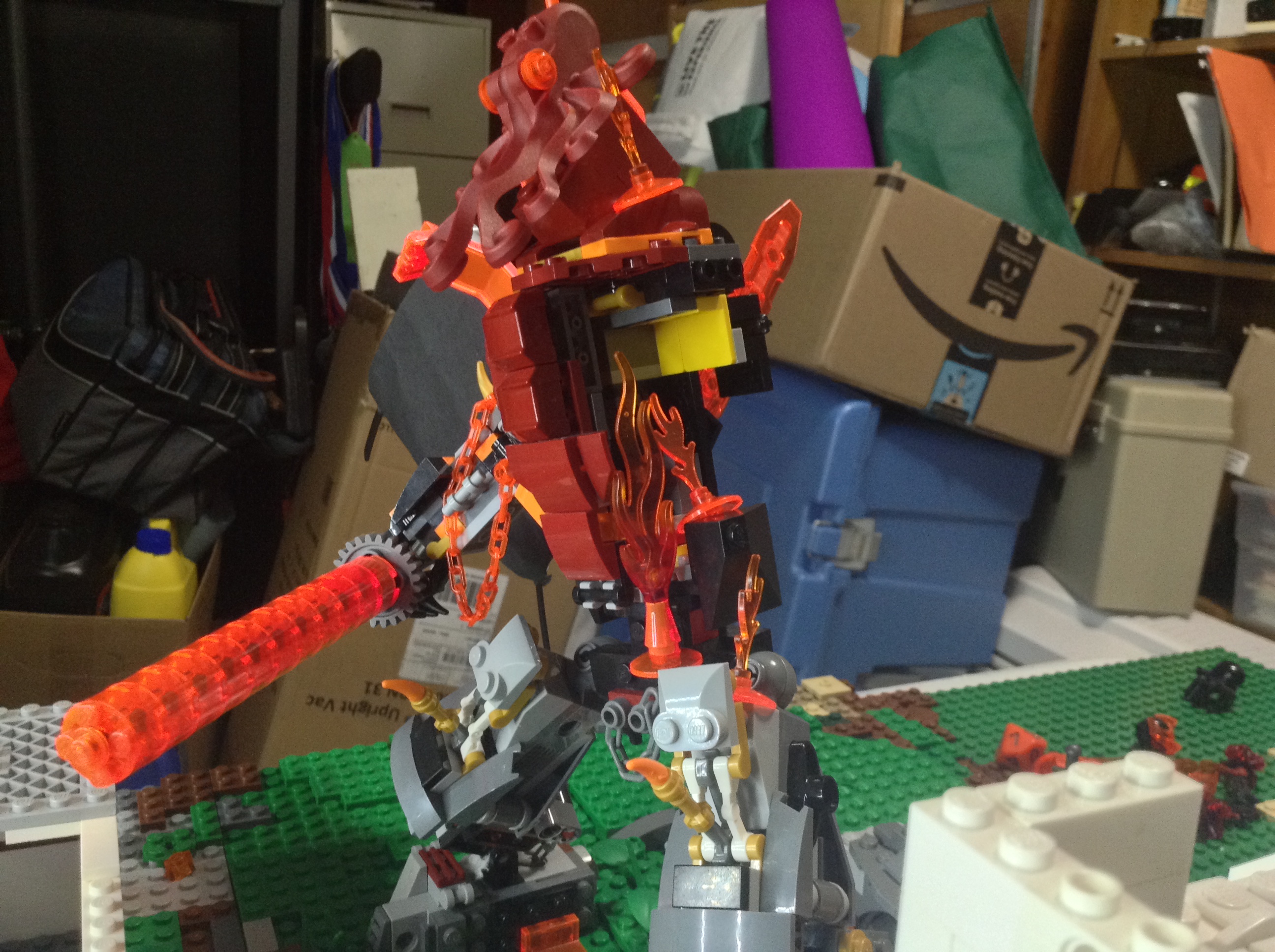 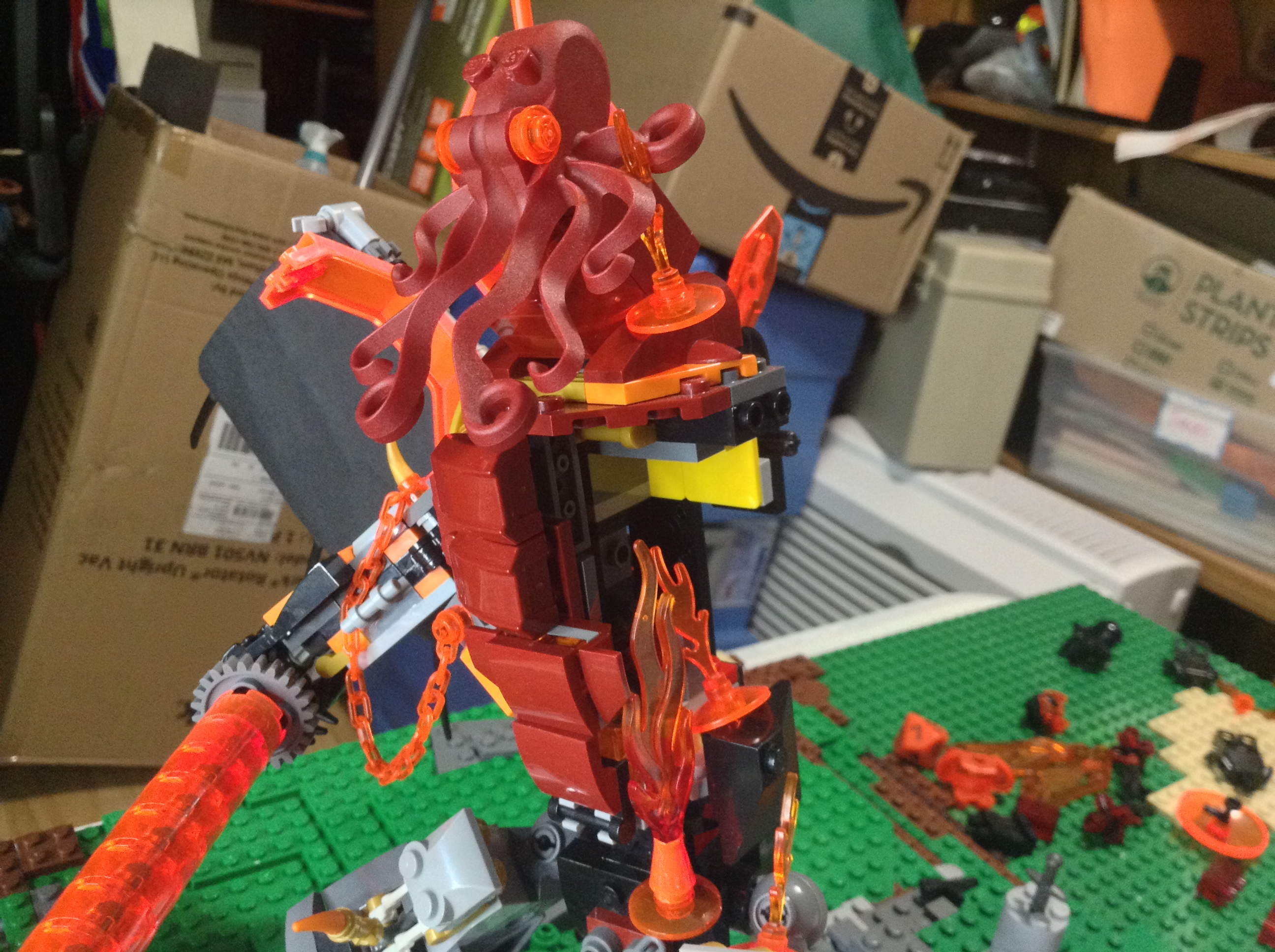 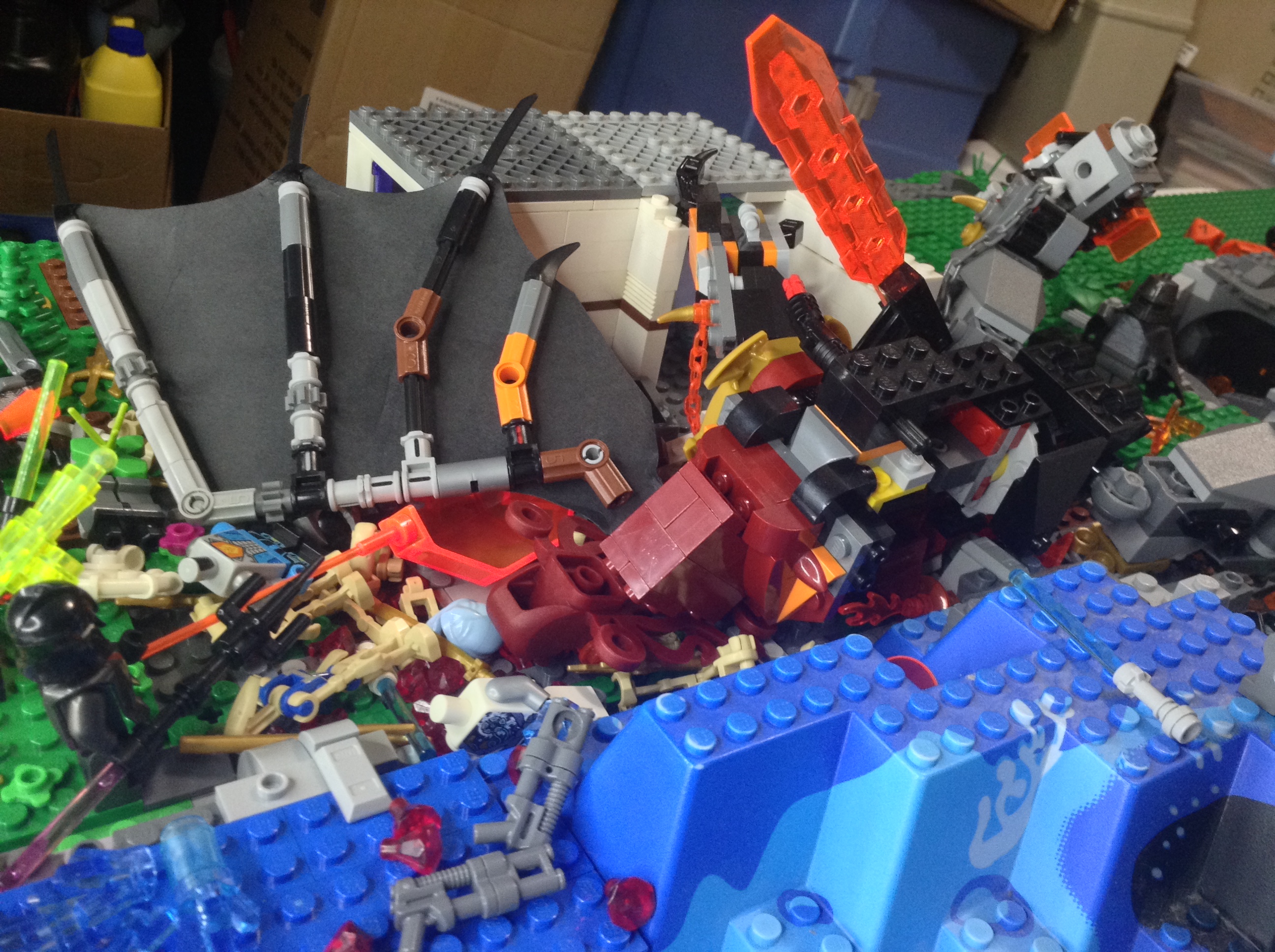 And thus, the heroes were victorious once again. What could possibly go wrong after this?
Thank you all for reading, I hope you enjoyed it! My plans for the future involve a monthly installment of a new story arc for which I, since I have free time now, will hopefully begin sometime before school resumes. I again lament my neglect of this battle, and plan to set a more...reasonable schedule that I can actually (probably) keep on time with uploading.
Until next time!
-Darkstorm
Darkstorm will rise! Someday? Probably tomorrow.
My Old Faction:Darkstorm Empire, New Faction: Phoenician Empire My Alliance:Kult of the Darkness
I swear I'm not dead, just dead inside
My bi-annual visit trend continues! See you in 6 months as usual.
Top

Re: Deathmatch: A ragnablok special (AGT2)