Apaches! 1 Hero (Guy in the Red) 1 Officer (Guy with two hand weapons)
And 3 Minifigs! (Everybody else) Objective: Kill the Cavelry

Outlaws on Horseback! 1 Hero (Indian with spear) 1 Officer (Guy with Bow)
5 Horses, And 3 Minifigs! (Everybody else) Objective: Kill everybody

Outlaws on Foot! 1 Hero (Guy in the huge hat) 1 Officer (Guy in green with Sword and Pistol)
And 3 Minifigs! (Everybody else) Objective: Kill everybody

And the Cavelry! 1 Hero (Guy in blue cowboy hat) 1 Officer (Guy to heroes right)
5 Horses, And 3 Minifigs! (Everybody else) Objective: Return the favor to the Apaches

OoF (Outlaws on Foot) win the Int roll and the hero fails to kill anything with his shotgun.

His friends move up and...

BLAM! BLAM! take out a OoH (Outlaw on Horseback) First blood to the OoF! 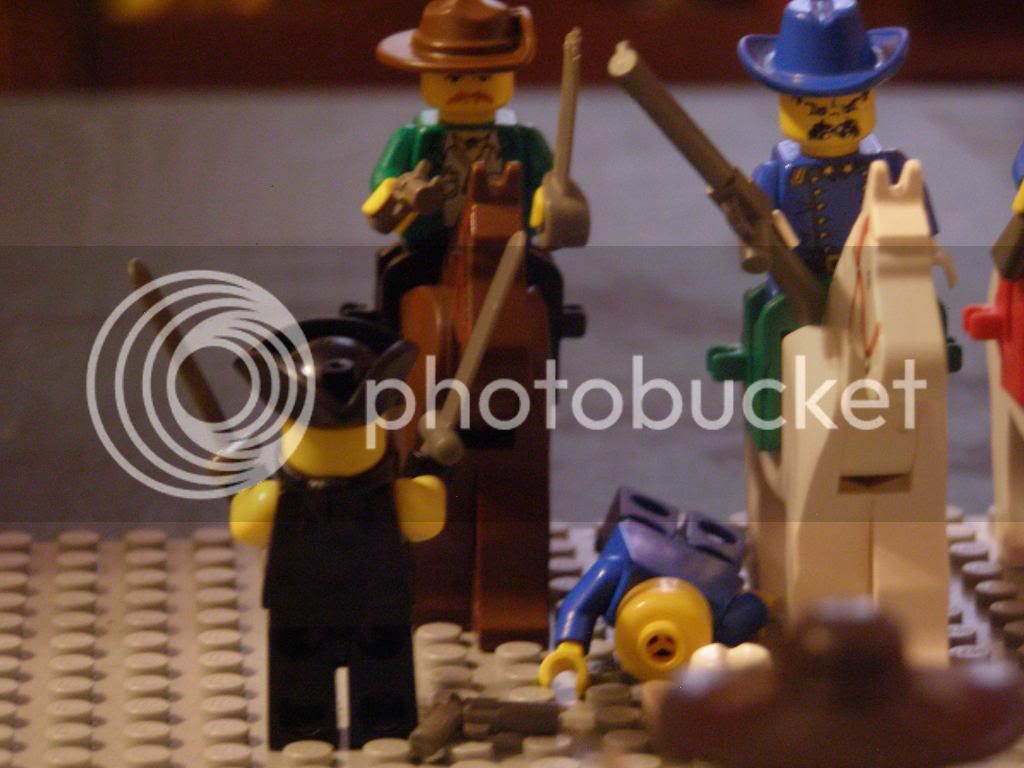 Cavelry's turn: The Cavelry Officer attacks the Apache Chief a I kid you not, this what he rolled:

The Cavelry Hero kills another Apache.

Apache's turn: The Apache are angry about their hero getting killed, so they kill the Cavelry's Hero 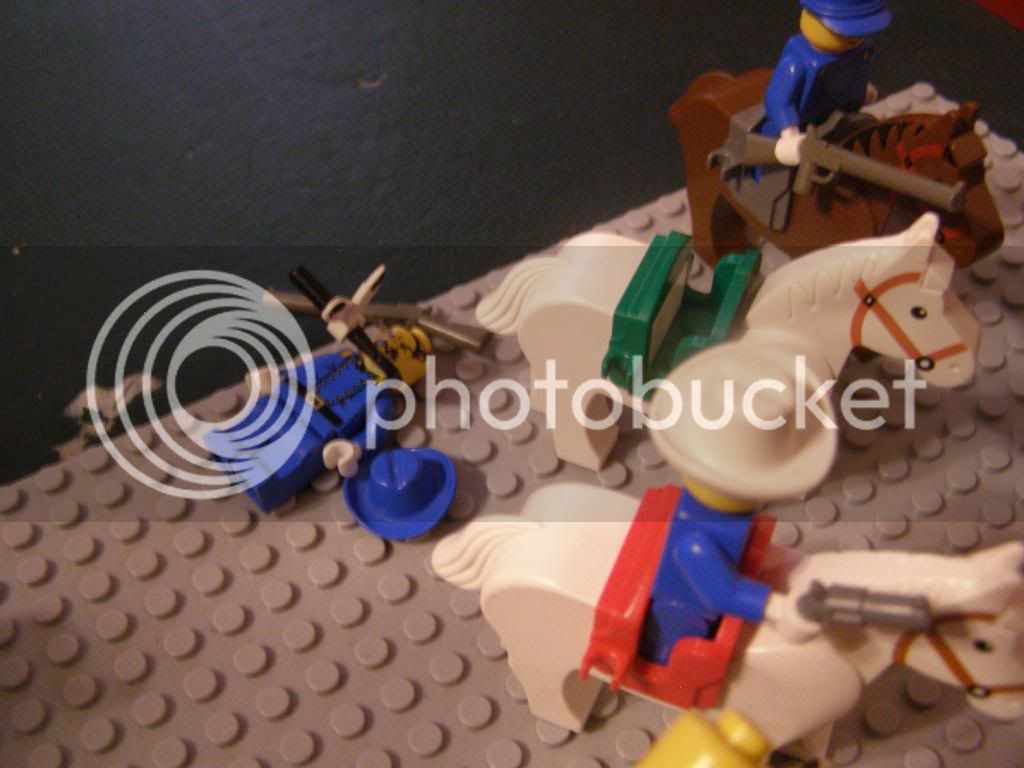 An Apache picks up the feather crest and puts it. then runs through the Jerk that killed their hero.

The last Apache doesn't do anything useful.

A rider tries to kill a OoF, and fails totally. 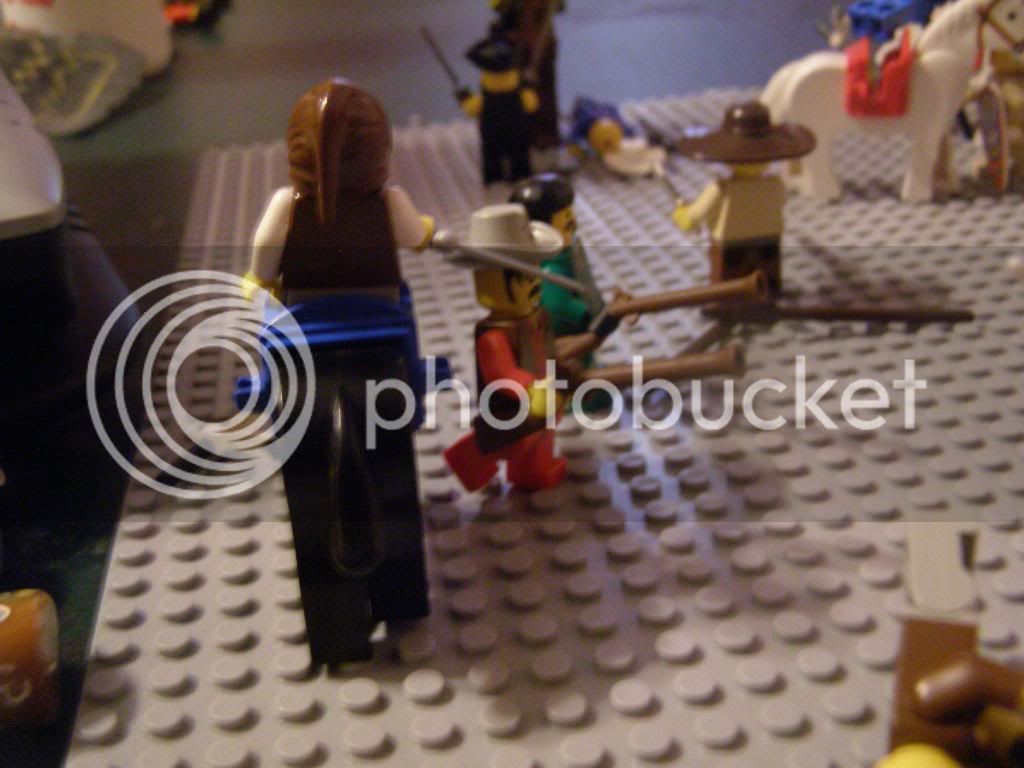 OoF's turn: An OoF kills the Apache who took the Plumage.

the OoF in the green suit fails to kill the OoH leader.

His buddy also fails to kill his opponent.

The Cavelry and Apaches can't hurt each other, even when the Apache throws his spear.

Apache's turn: the Apache with a bow fails but the other dives for a gun... 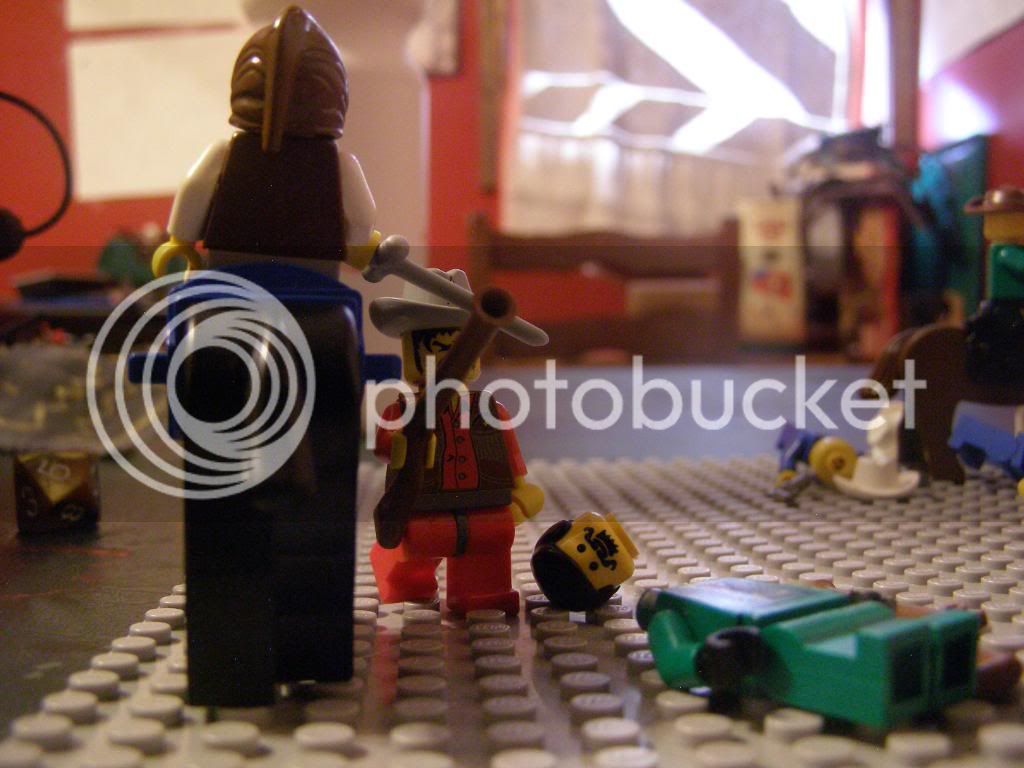 OoF's turn: The troop backs up next to the hero and....

BLAM! BLAM! the last of the OoH die. 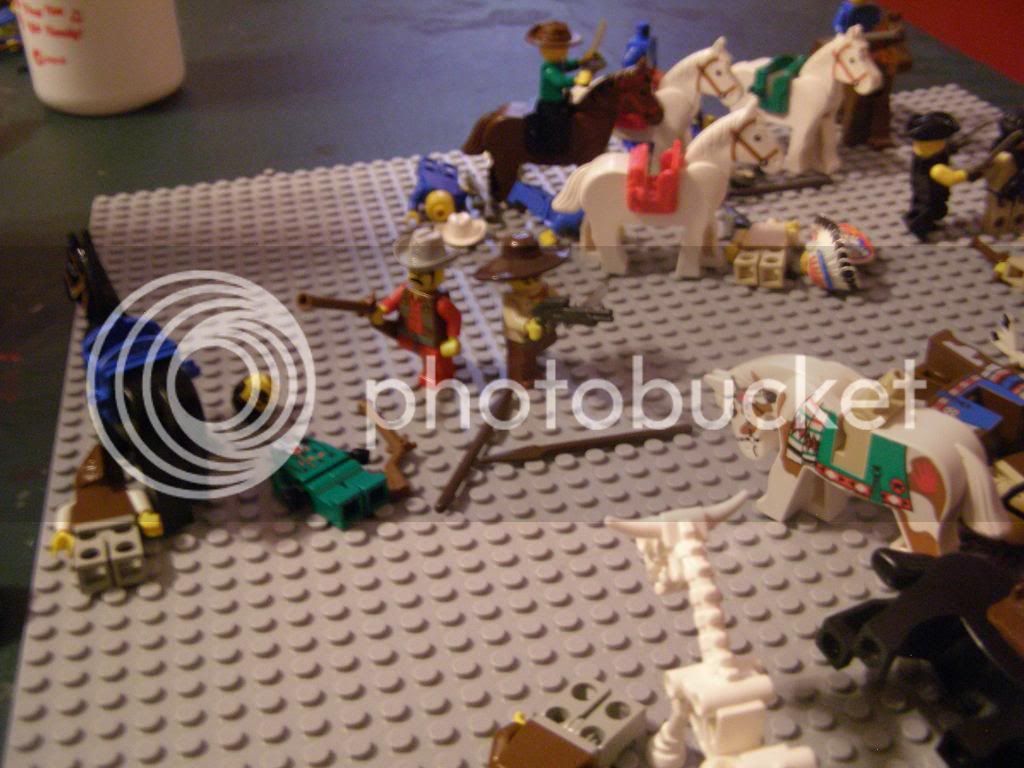 The OoF kills the last Apaches.

is brought before the leader of the OoF...

When that was said, I was suckered right in.

That being said, awesome battle! I thought that perhaps the Oohs and the Calvary would have an advantage, being on horseback. Silly me. I'll try to get a new one up on the 10th
My Brickshelf: http://www.brickshelf.com/cgi-bin/galle ... erorizer12

That's actually my biggest oversight in almost every battle I've played. I either forget that my heroes can call for Redshirts, or I forget to send any grunts WITH the hero to redshirt for him/her.
For Your Reading Pleasure: Rev's Battle Reports

Western battle, woo! You don't see those very often. Also, where'd you get the ridiculously-wide hat? My guess is the guy from cloan wars, but I'm not a 100% sure.

In the same boat as you, buddy. I use a computer to compensate.

Zahru II wrote:Western battle, woo! You don't see those very often. Also, where'd you get the ridiculously-wide hat? My guess is the guy from clone wars, but I'm not a 100% sure.

NOW! FOR THE FIRST TIME EVER IN BRIKWARRIORS BATTLE REPORTS!!!!
THE SIEGE OF RANDOMNESS FORTRESS!!!!

Orcs: Hero: Guy with big club. All others are normal minifigs.

Normal Humans: Hero: Hero for the OoF on the last battle. (Cad Bane took his hat back) All others are normal minifigs and most are wearing armor.

The Fort of Wan-Shu-Yu: Hero: Cad Bane. All others normal minifigs.

The Humans have a third force with a Ballista manned by 2 Civil war soldiers. hero: one with the bigger hat.

The Human Hero runs forward and fires his grenade launcher.

And the orcs are right there with them

The man in the Boba Fett armor shoots...

The men on the wall start shooting back but can't hit anything.

The Civil war soldiers draw their rifles and attack! ...Doing absoloutely nothing 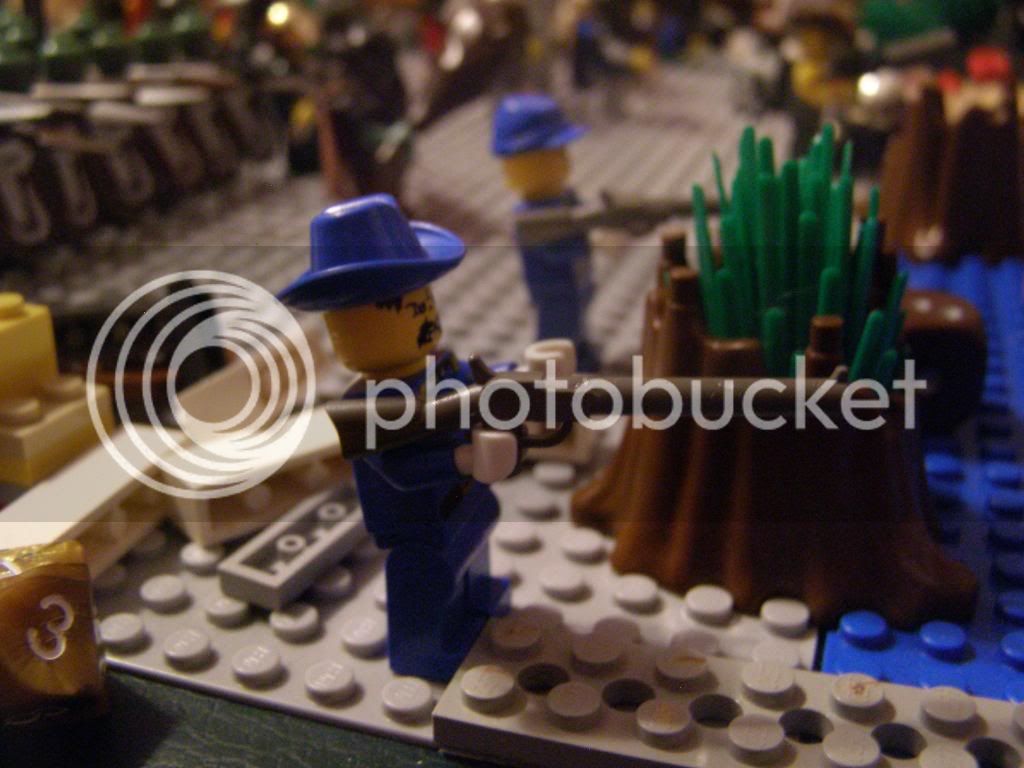 The orc hero moves up

The men on the tower fail to do anything.

The humans ninja runs up and dodges an attack

Then moves up to kill the skeleton. You can see an ax showing that his buds are almost to the wall.

Here's a shot of the attacking forces.

the civil war soldier takes cover in a tree stump. His boss thinks it's a good idea until...

The mine blows him to pieces.

The orcs move up 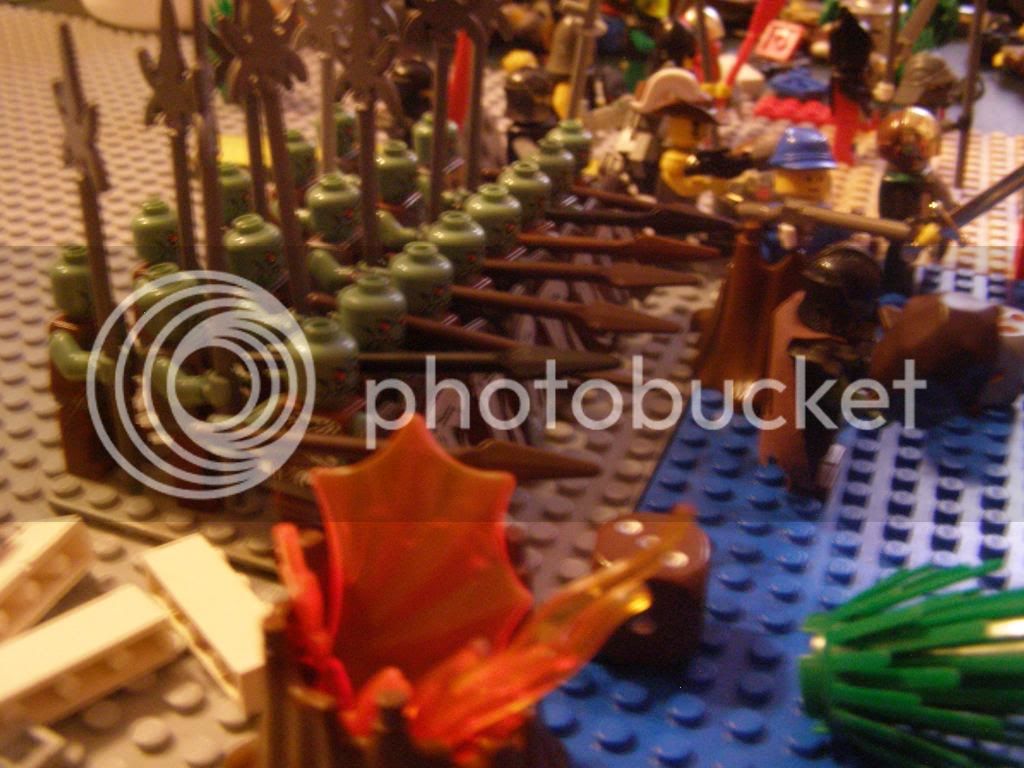 A traitor climbs the ladder and fails to assassinate the Jedi,

The 2 droids that were on the tower move down.

the orc leader pops up and...

smashes them both to pieces!

the Knights smash up against the wall. And a Wun-Shu-Yu attemps to kill the ninja...

but shoots his jedi boss instead! "oops..."

the orc leader fails to knock down a little wall blocking his way onto the fort.

The human leader moves up and fails to do damage with his grenade launcher.

The Knights kill another enemy

All the knights are surging towards the hole in the wall.

The Orcs swing round towards the hole in the wall

The man in the Boba Fett armor kills one member of the invading the fortress.

the knights surround the alien, but fail to kill him.

The orcs draw closer to the wall

2 of the guards try and fail to shoot something.

Grenade-Launcher guy brings out a mine...

BOOOOOMMM!!!! it explodes killing one of the guards.

the knights kill the alien

And the orc warlord gets trough the wall at last, leaving him with another wall to destroy. 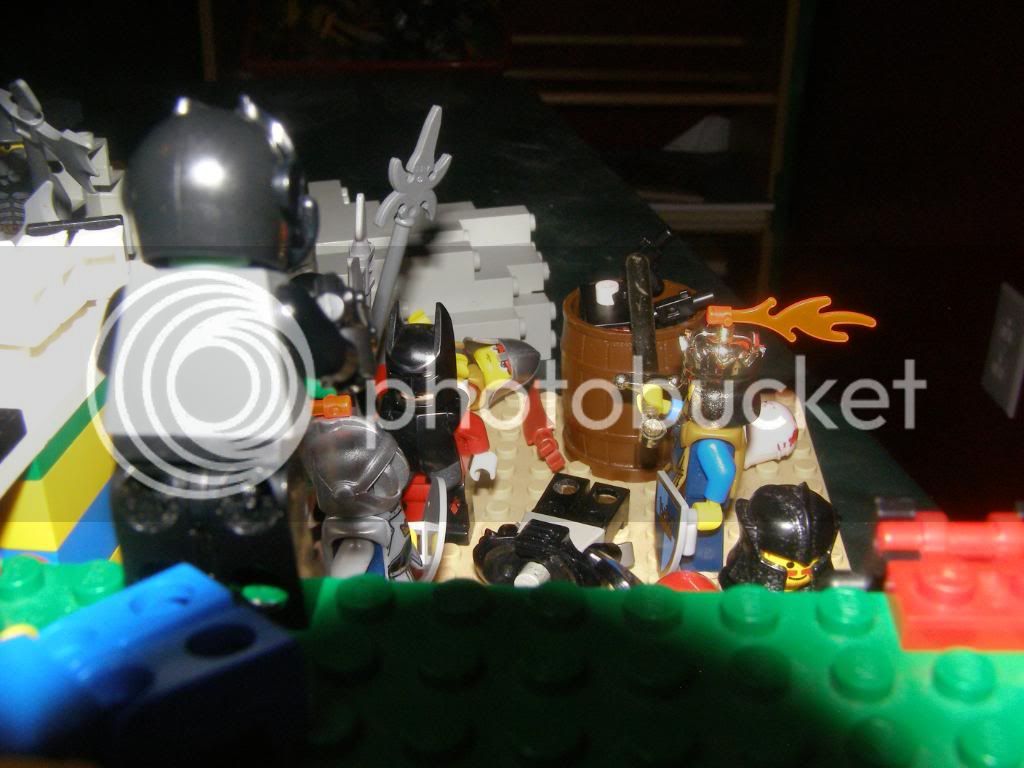 the warlord has much less trouble with this wall, bashing it right in with his club.

A knight tries to kill another guard.

Grenade-Launcher-Guy fails to do any damage.

A knight pops up on the walls. 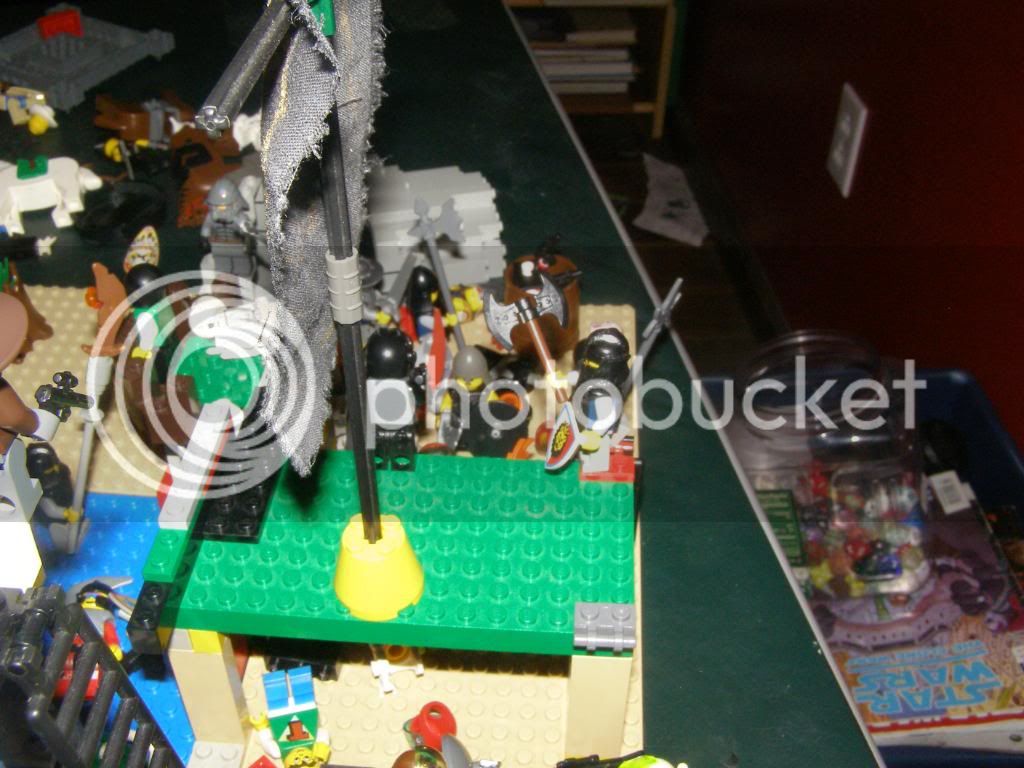 And now for part II

A knight tries to kill a guard, while other knights are moving under the bridge, attacking the guard there

The Knight on the wall kills the dunderhead who shot the Jedi.

A knight makes it trough the bridge.

The orc leader fails to knock down the tower.

they fail to gun down the knight on the wall

the guard kills a knight.

the knight on the wall fails to kill the man in Boba Fett's armor.

The Orcs betray the Knights! (well what were you expecting?

The knights pour out of the fort ready to kill the traitors.

The civil war soldier kills the last of the Wan-Shu-Yu soldiers. Now it's just Cad Bane

The Orc leader enters the fray.

The human leader fails to kill any orc scum.

"Death to the Traitor!"

The knights on the wall surround Cad Bane. And the orcs still can't scratch the knights armor

Cad Bane tries and fails to kill both his enemies at the same time.

the knights break out of the rubble.

...but the civil war soldier doesn't. THE HUMANS WIN!

Overveiw of the carnage.

I'm gonna have battles each in there own topic from now on, but I'll link then all in this thread.

Remember: "Teach" is spelled with the same letters as "Cheat"
Top
Post Reply
15 posts • Page 1 of 1