This is the start of a Full fledged Britanian LDD Navy. When I was commissioned by Colette to do the Nimitz/Concord Class, someone suggested in chat I should do the Brits, which sounded like a good idea, they're an important faction in the Immortal war, which is about to come to a boil the way things are looking. I only had three reference pieces, The ships in ZZD, a brief description in the excellent border patrol story, and Scythe's LDD cruiser, so I decided to start from mostly scratch. Obviously these are semi-official, in that it's a somewhat disowned puppet faction, but is still under Warheads control. It's only one ship for now, but I'll be expanding quickly if this vessel is well received
The Spithead Nebula is the home base of the Britanian Navy. Tall ships of all shapes and sizes can be found here, some of them dating back decades in construction, A patient observer can make out the lineage of many of these ships, as vessel design changed between ships of the same class, to a point where very few looked truly alike. The largest and most powerful, aswell as some of the newest ships found here are the Glasgow-Class second rate ships of the line.

Very few pure bread heavy artillery platforms exist, and the Glasgow Class revels in this status. It's stature puts some Dreads to shame, and its primary armament of four quad repeating artillery guns is designed to dessicate hulls in quick fashion as targets are bombarded with high velocity hybrid ammunition, battleships are ripped in two, and when multiple Glasgow ships bring their combined strength onto larger targets, the results are no less devastating.

The defining characteristic of the ship is the large ring that surrounds it, within it the vessels warp and shielding equipment is contained, in this configuration the vessel can have a faster warp drive compared to most other vessels, and can run shields over a larger area with minimal drop in intensity.

I daresay I had made one much=previous attempt towards a Britannian cruiser armed with Cavorite weaponry . . . but it doesn't hold much of a candle to this. 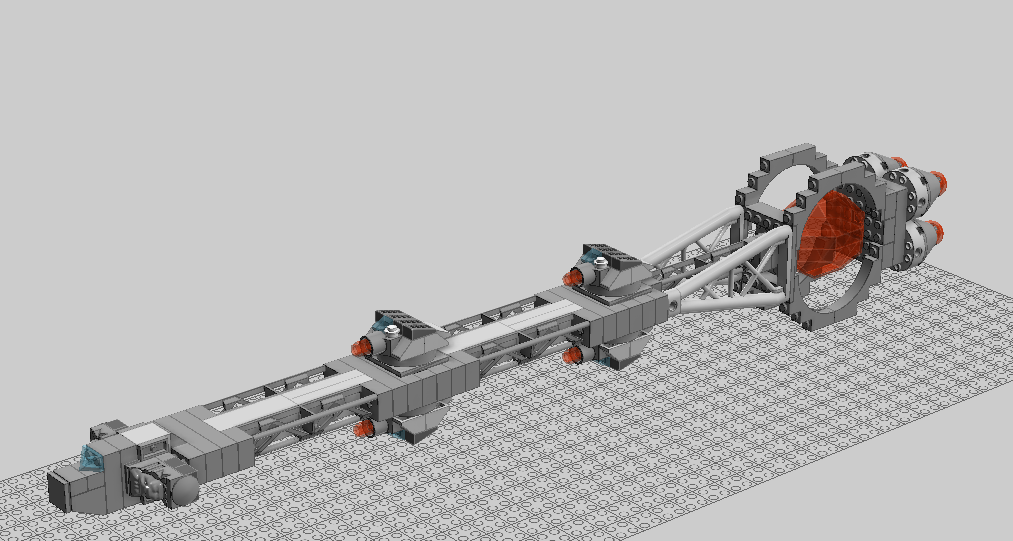 I am loving the design of this ship however, and for the first time in a long time I am inspired to open LDD.

Awesome may or may not follow.
-- WARNINK -- LINK BELOW IZ KNOWN TO CAUZE HEMMORAGE --

The Brittannians are perhaps among the most underdeveloped yet important factions, and you blew this out of the water dilanski. You've gained so much experience, this stuff is worthy of posting on those dedicated lego blogs and stuff.

Second rate? This ship's design is first rate.
This sig is too fucking large: show anyway

Colette wrote:The Brittannians are perhaps among the most underdeveloped yet important factions

And that is the absolute best thing about them. Anyone can make a Brittanian faction and have them look however they want as long as they stick to the theme. Colors don't matter. Neither does equipment. They are owned by noone and controlled by everyone at the same time.

It's a shame no one's made a Britannian wiki entry yet.

stubby wrote:It's a shame no one's made a Britannian wiki entry yet.

It doesn't help that it isn't a word, It should just be Britannia with a an 'n' on the end. I put two 't's in because I'm secretly a gibbon.
Almond Status: ACTIVATED
Top

stubby wrote:It's a shame no one's made a Britannian wiki entry yet.

You win this round, Zupponn

Goddamn, that looks good. I'll have to try building a ring into one of my next Brittanian ships. I would like to announce, that you have inspired me to work on my own third-gen dreadnought.

Colette wrote:I would like to announce, that you have inspired me to work on my own third-gen dreadnought.

Good on you, just make it an actual ship this time.

Also the Glasgow Second Rate is now available for download on the Old Wiki's LDD microspace Database. Feel free to let wreck shit it up in you Vignette's and Stories and for it to be equally shot up.
Almond Status: ACTIVATED
Top

I hate to steal, but I quite liked Scythe's cruiser design, I had hoped to implement the open structure style into the Glasgow, but it was at odds with studs up construction, so I decided to leave it for a later ship. Coming to the Third Rate I realised scythe's design could be what was needed so I decided at first to 'polish' it a bit, eventually a few things changed with it, but It's still really the same ship. Scythe never named the ship, So I've gone with the Queen Elizabeth Class, less because brits like naming ships after her (I Lie) but more because It fits in with the fluff for them, The original real life ships were Super-Dreadnoughts built in World War One, and heavily augmented to serve In World War Two.
the Queen Elizabeth Class is a Third Rate Ship Of The Line, and one of the oldest classes of ships still in service with the Brittanian Navy. Heavily Augmented through the years, there are a few different strands of ships that have emerged over the years, as different vessels received different refits, but they all retain the same general characteristics.

This design has a shielded reactor compared to some open designs, it's output is less, but doesn't require that energy for weapons, so the extra energy isn't missed. FTL drive is a standard warp drive, which while behind newer ships, still serves the purpose. Sub light thrust is provided by four chemical rocket motors, and a set of reaction gyroscopes provide the ships with turning capability.
Last edited by dilanski on Sat Dec 28, 2013 10:29 am, edited 1 time in total.
Almond Status: ACTIVATED
Top

Deep within the Spithead naval shipyards, the Britannian navy has been working on a new kind of technological monstrosity - taking the ethos of the Glasgow class and scaling it up to dreadnaught class, merging it with new technologies from their alliance with the Immortal Empire and forging an entirely new class of vessel from the results. 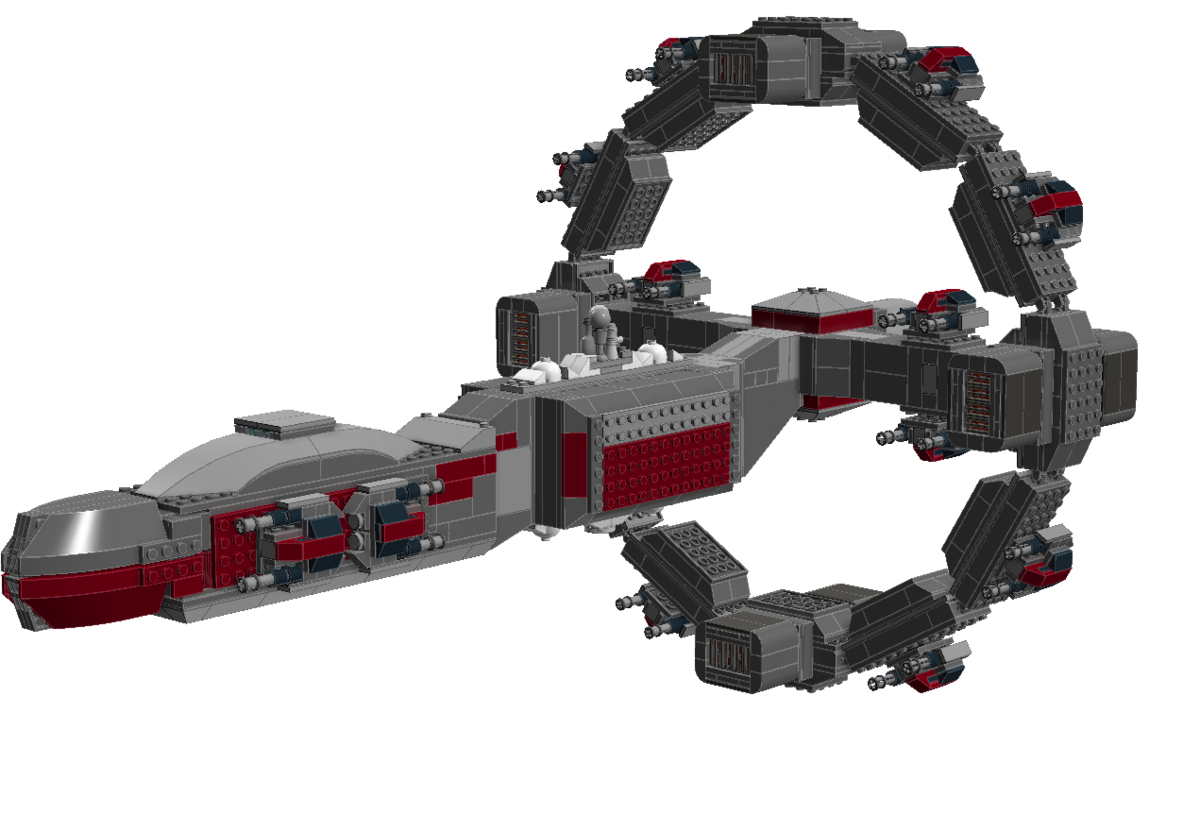 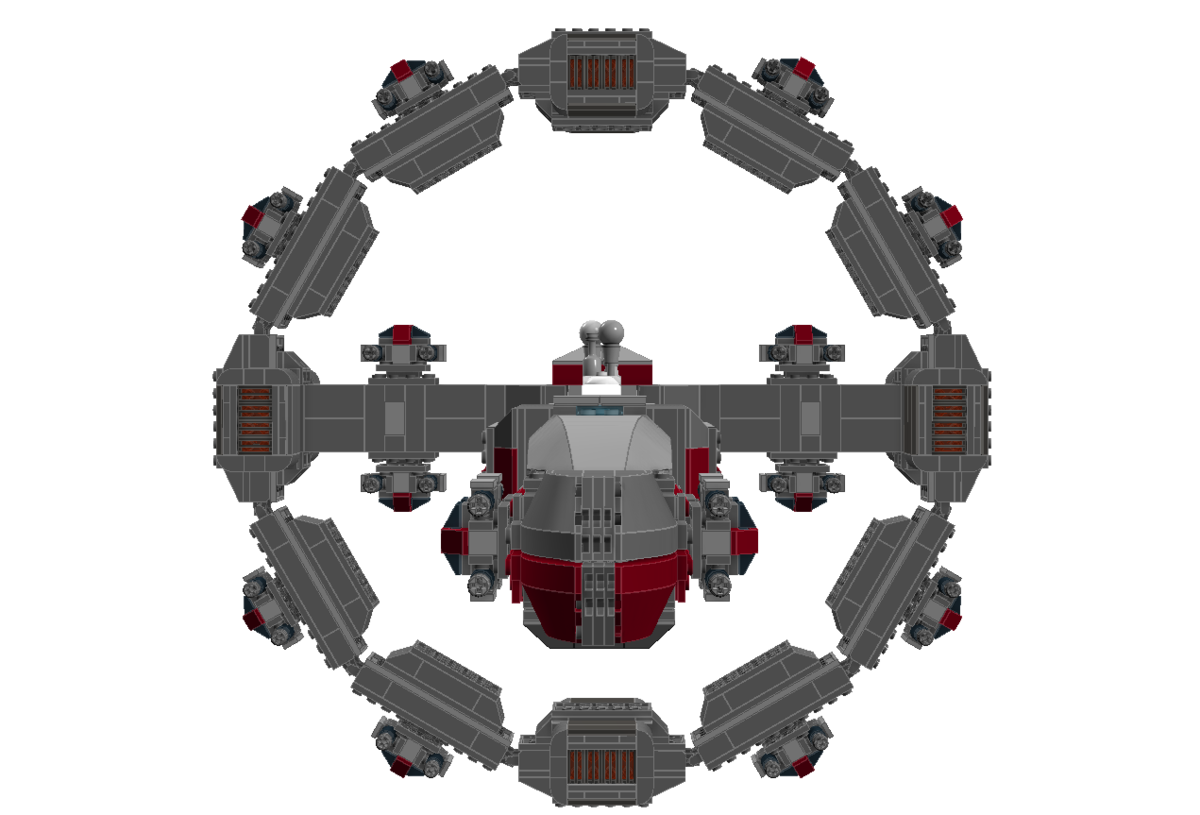 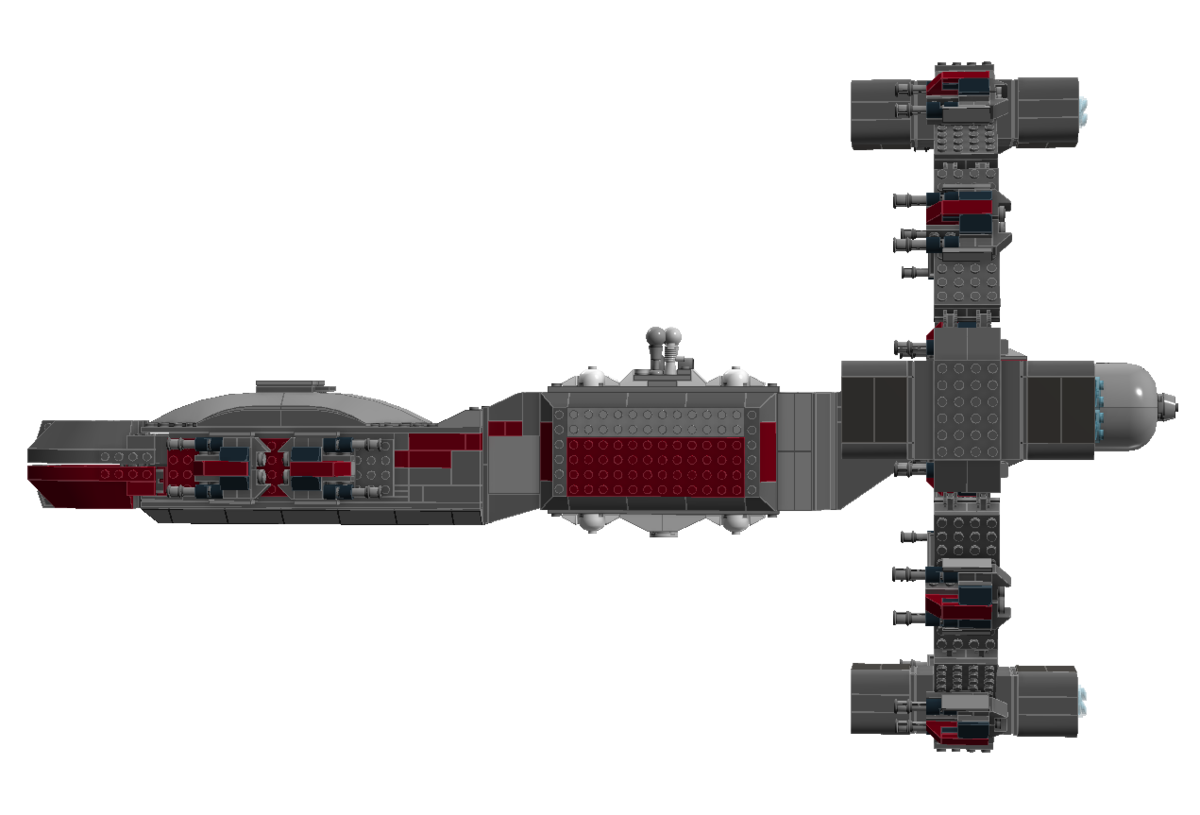 The Edinburgh class is a new breed of Dreadnaught - packing enough firepower to take on Dreadnaught class vessels in something nearly half the size. Powered by Immortal blackhole generators and kept behind thick plates of Titanium armour and advanced shields, the Edinburgh is fast and capable against ships below her class - but her main killing armament is hidden within her metal shell. 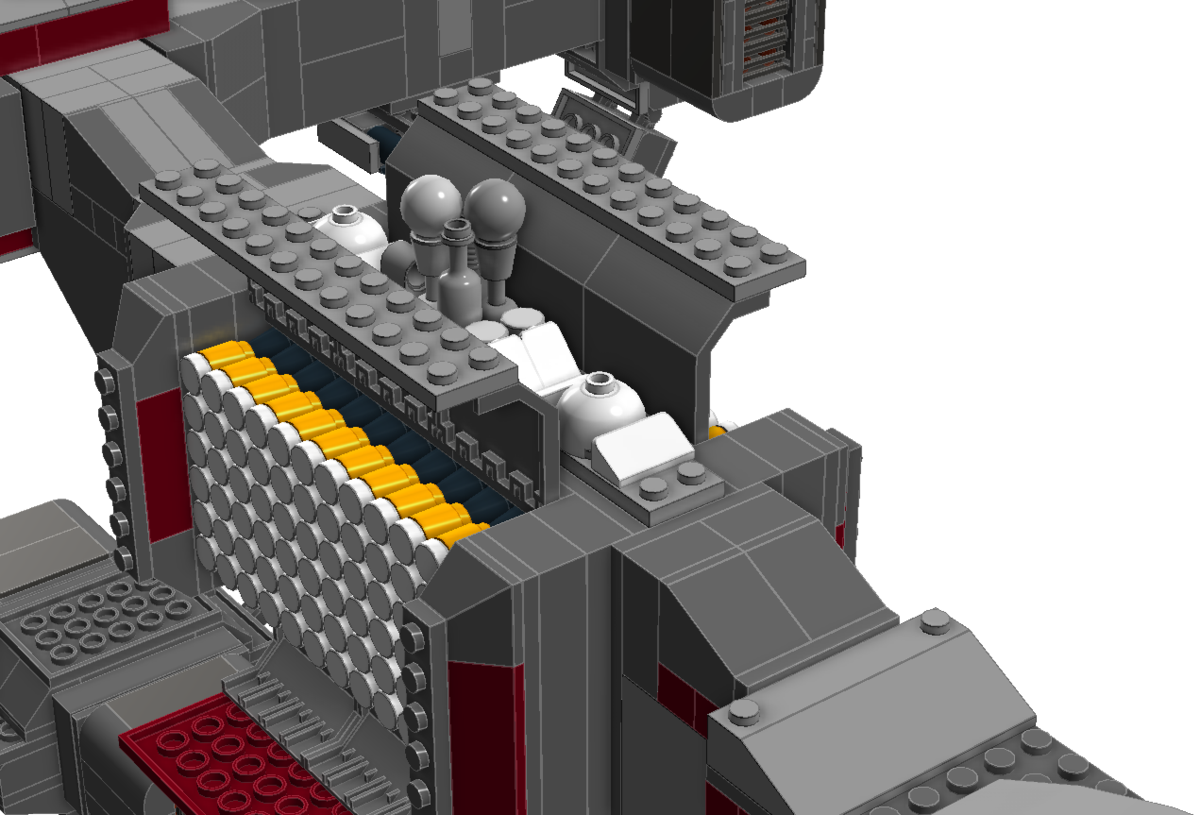 132 "Pounder" Tri-Nuclear missiles contained within the central hold to be launched as an Alpha-Strike assault pattern, every single missile at once against a single target - designed to overwhelm and obliterate any target they can match in a single salvo. 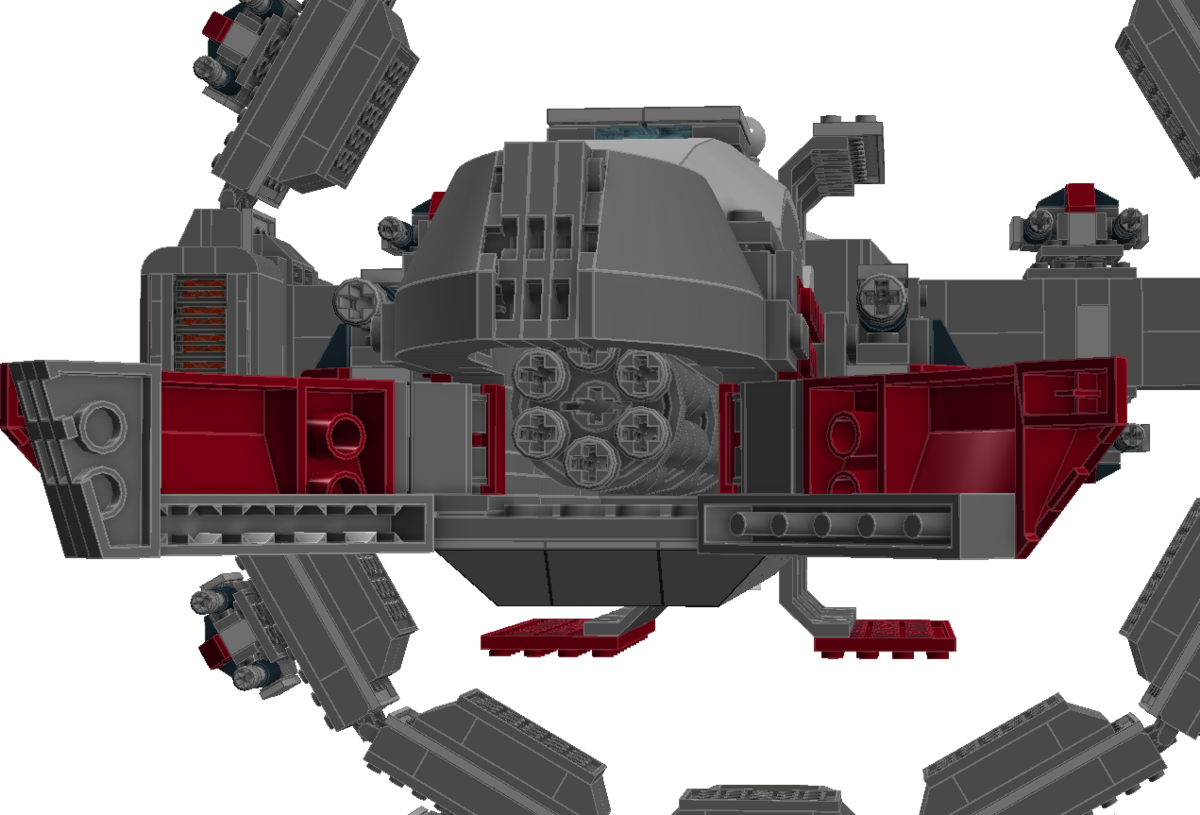 Here is the Edinburgh's Primary Weapon - the Hellhammer. Weighing in at over a third of the vessels total mass - it is a Gatling-MAC cannon, six barrels that fire in two rotations - firing no less than Twelve 575 tonne Ferrous-Tungsteon shells at .3 of the speed of light.

And it can do this within 12 seconds.

Enough firepower to level most shields, armour and internal structure of fellow Dreadnaught class vessels in a single salvo - and destroy them within three. 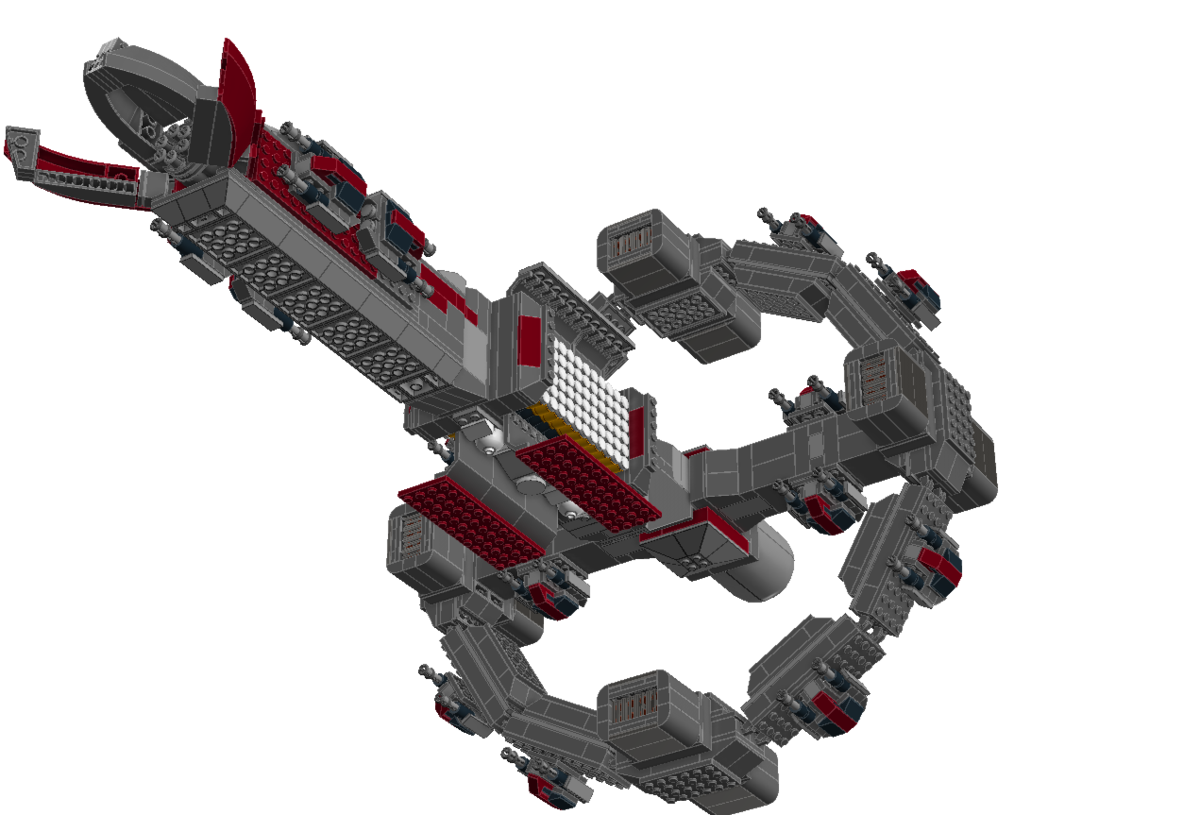 Backed up with Heavy Battle Cannons and working in wolf-packs of 3-7 Edinburgh class Light Assault Dreadnaughts (L.A.D for future reference) the Britannian Navy has brought an entirely new generation of Hunter-Killers into the void.

Colette, Dilanski - the game as they say, is afoot.
-- WARNINK -- LINK BELOW IZ KNOWN TO CAUZE HEMMORAGE --