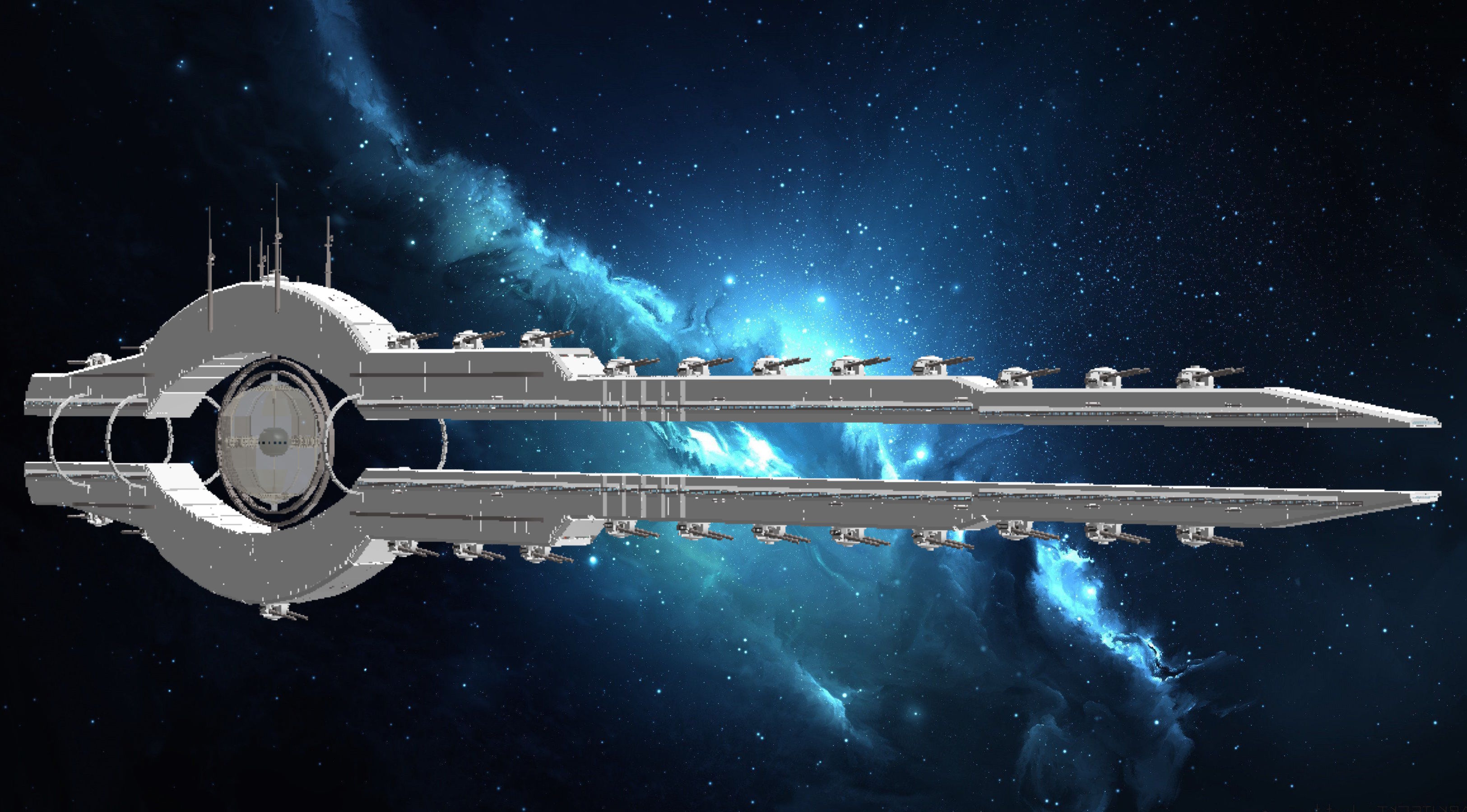 I like the overall shape and the broadside guns, but the big turrets look a little off. It feels like they might actually work better without the big dishes on top.
[21:30:33] Scritch: you can put it in theblackdog

With the increasing prevalence of missiles in Praetorian and Brittannian ships, the Trattorian empire thought a stopgap was needed. The Joint Chiefs of Staff hence commissioned the Lelantos-class orbital defense platform, to serve in conjunction with its older sibling the Helios.

A close up of the bridge. Unlike its predecessor, the Lelantos has a large bridge with an ample communications package, and a small area for hangars. Due to its explosive ammunition, it also mounts six shield generators.

Inevitable size comparison with the Helios, an Athenia dreadnought, and a Midgetman frigate.

The Curie-class battlecruiser is the newest addition to the Trattorian fleet, designed to replace the severely-outdated Peacekeeper-class (the latter's design having remained unchanged since 2011). The Curie keeps the general shape of its predecessor but increases the scale of everything- for example, many of the ball-turrets have been replaced by a more powerful quad-turret design.

One peculiarity of the Trattorian navy is its lack of a dedicated carrier vessel. Instead, the role of bringing fighters fell on the cruiser-class vessels, deploying them from external racks but lacking any means to refuel or repair them. The new battlecruiser maintains this role using the same external racks system, the difference being in the expanded capacity of 96 fighters (compared to the 6 of its smaller cousin). Additionally, the nature of the racks system allows for more flexibility- for example, the fighters could be switched out for a broadside battery.

I hope for this to be the start of a massive renovation of the severely-outdated Trattorian navy. Other priorities include upgrading my destroyer and battleship classes to modern specifications and technologies.

//CERTAIN PORTIONS OF THIS FILE ARE CLASSIFIED. PLEASE ENTER CREDENTIALS.

The Trattorian Navy realized its Invictus-class and even its second-generation Endeavor-class battleships were inadequate against the modern capital ship classes fielded by other superpowers. Thus, it approached the Engineering Department of Trattoria and commissioned "the most advanced possible ship you can mass-produce on a budget". The result of this project is the Heisenberg-class third-generation battleship, boasting 16 relativistic kinetic-kill turrets with bottomless "portal" magazines as well as a central quantum AI capable of 500 zetaflops per second.

The main advantage of the Heisenberg is its ability to maintain line of sight between a target and each of its turrets by spinning. This ensures that the Heisenberg is able to attack anyone on the battlefield with any fraction of its firepower.

The Heisenberg significantly outguns both the Praetorian Heathen and the Scythian Emperor, and is on par with some smaller dreadnought classes.

Moreover, it is, at least in theory, capable of ████████ ███, which is the purpose of the particle accelerator ring. Although the initial test proved unsuccessful (see "Large Magikallenic Cloud, 163,000 light-year test"), refinements eventually extended both the range and reliability of the ████████ ███ (see "Andromeda Galaxy, █.█ million light-year test"). Destination accuracy is now bounded within the tens of thousands of light-years. This shift in policy on the sharing of technology with the military is in the best interests of Trattoria, in the eventuality of a war with an extragalactic power such as M-Throne, RARcom, or even ███████. This exchange is undertaken with the understanding, however, that all Heisenberg-class battleships are to self-destruct given any sizable possibility of capture. Having moved beyond the past two generations of intergalactic ships, it is now fully possibletoclaimTrattori0101001an inter01110icpower.01001111000

//BOOTING USER; ALL FILES EXPUNGED UNTIL REAUTHORIZATION BY DEPARTMENT CHAIR


This recent security breach is unacceptable. Although RARcom already possesses knowledge of [DATA REDACTED], imagine the consequences of the Scythian Faster-than-Light Institute gaining access to the last half of this file. The last thing we need is for the secrets of ████████ technology becoming a public and commonplace element of the brikverse.

Also, rings do seem to be the next best thing in LDD.
-- WARNINK -- LINK BELOW IZ KNOWN TO CAUZE HEMMORAGE -- 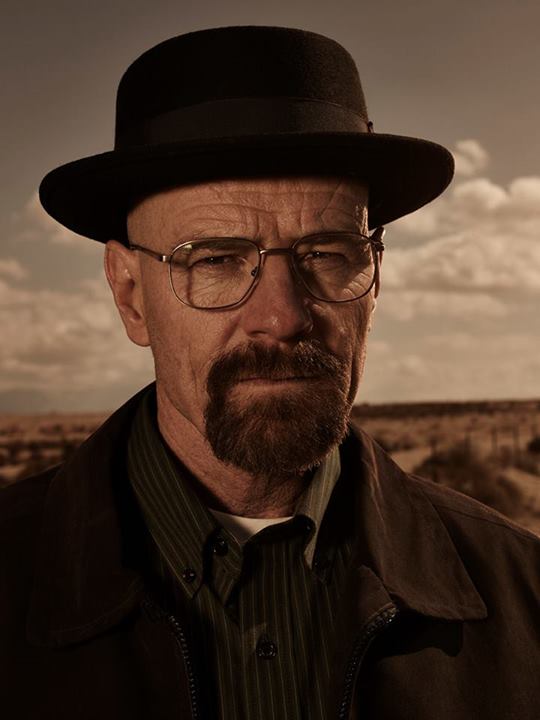 Walter approved.
This sig is too fucking large: show anyway

"What the hell! We only expected a minor border patrol group. Is that a new..."

The Bavarian Punisher Cross battleship split from the tremendous firepower leveled on it.

The EMP death cannons have increased in base power by 50% by the addition of a third convergent beam in addition to improvements to the weaponry itself. 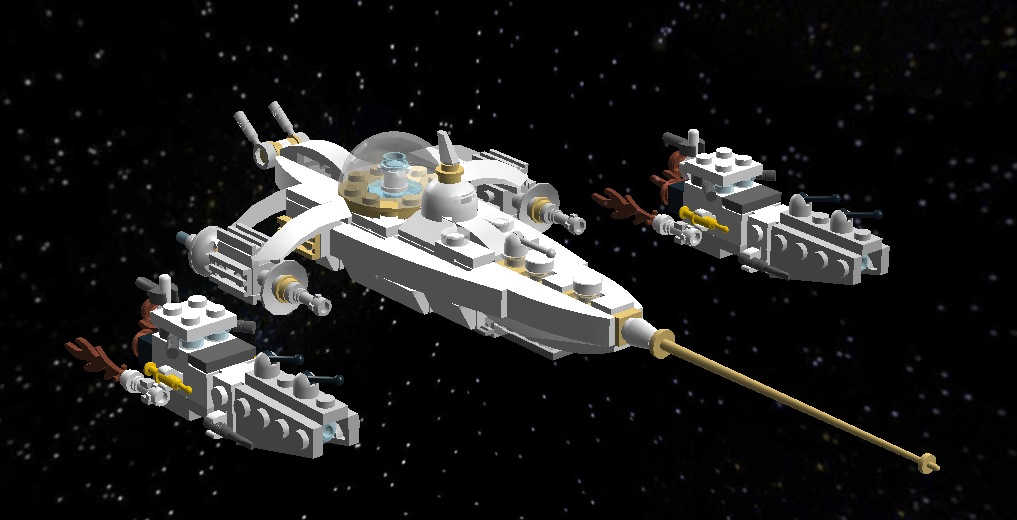 In a reversal of the situation in most star nations, the Trattorian military lags in teknology behind the civilian sector. The hull and design for the Faraday destroyer originated in the Clairaut space yacht, manufactured by Virgin Engineering (the same subsidiary company that constructs the massive luxury tori that orbit many Trattorian worlds).

The Clairaut features a swimming pool and fountain with a 360-degree view of space, a shuttle bay (a feature also on its military cousin, the Faraday), one of the most advanced Appel® navigation AIs in the BrikVerse, a fully automated robot staff, and all the other amenities you would expect a spoiled-rich super-spaceyacht to have. Plated with gold, the Clairaut is aimed at Virgin’s luxury market, with prices starting from ₮50 billion Trattorian dollars ($51.5 billion USA dollars).

Last, but not least, I finally delivered on my promise for a broadside-version of the Curie-class cruiser. In lieu of fighter racks, Curie cruisers now have the option of mounting battleship-class siege cannons.
Last edited by Colette on Fri Mar 06, 2015 11:53 am, edited 2 times in total.

A vast improvment over the Chimera. Well done!

That civilian stuff is the coolest.

This is all really quite good. Very elegant and evocative. The civilian stuff seems almost pulp in design and I like it a great deal.
Quantumsurfer's Narrative Index
Top

Out of curiosity, what kind of tactics do you envision the broadside Curie cruisers using to get the most out of their guns? I ask because most of my ships use broadsides, and I had to spend quite a while trying to figure out how they would effectively fight with that kind of weapon layout.
Top
Post Reply
42 posts