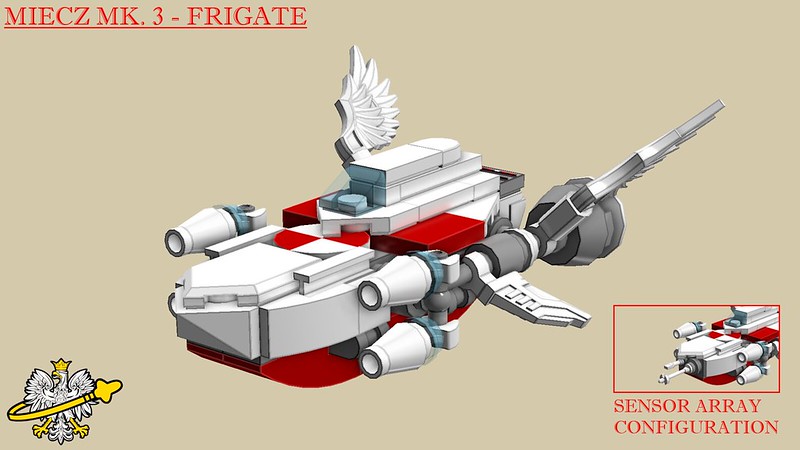 Miecz (Sword) MK 3 - Frigate
As part of the final preparations of the long overdue liberation of Lietuva, the Naval forces of the URP are currently undergoing a vast overhaul. The first starship to receive a renewal is the popular Miecz Frigate, equipped with upgraded engines and guns with better rotation for an enhanced firing arc. Each frigate can be equipped with either a battering ram to break into much bigger warships or a sensor array to detect incoming enemy movements with no difficulties.

The wings are a super cool touch.

Polish Naval Design Bureau
"PUT WINGS ON IT"
"But sir, it's in space! It doesn't need wings!"
"I DON'T CARE, PUT WINGS ON IT! IT LOOKS COOL!"

Now I'm wondering what the rest of your ships would look like with wings on them.
gotta love knitting needles. i can make you a scarf. i can make a hat. i can stab your eyes out. i can make mittens.

"What about simple triangular wings?"
"HOW ABOUT FEATHERS?"

love it.
I make apocalypses and apocalypse accessories.

Król (King) MK. 3 - Destroyer
Equipped with bigger engines and more flexible gun joints, the newest generation of Król Destroyers returns with never before seen agility for a warship of its size. Thanks to their enhanced front hull plating, these ships take even less damage when ramming straight into bigger adversaries or sweeping through hordes of smaller ones.

I like how you incorporated the hussar wings into the design - it really adds to Polonia's unique style.
[21:30:33] Scritch: you can put it in theblackdog