Finally I draw up plans for an Emerian Dreadnought!

Scroll down. Or see a eye care professional.

You will be ignored.
Thoroughly so.

Thus!
I shall go dark on all fronts save Emeria, Emerian canon, the Emerian army, and the other details to Colette. Compound, however, will resume until it ends and I start on building canon.
Now, let's look at my predictions for responses to this post.

If you voted the last category, then look at this spoiler. You make me sad.

An Idiot wrote:LOL Vami, you're a N00B. Yur army doesn't even have a IRL tank LMAO. Just give up.

You will be ignored.
Thoroughly so.
Also, LMAO is a dumb meme and you should be ashamed about it. Even more so than people are of me for using them (Overwatch, I'm looking in your direction).
Skip this part if you dislike reading my prattle and want to see my work.

A Reasonable Person wrote:Yo, Vami. I remember that (select piece, like a turret) from (certain faction, like Praetoria) being on another ship from said faction. Mind changing it?

O Rly?
Good. Point it out, and I can / will change it to the best of my abilities. I will then post the select item and you, dear reader, can determine if it passes muster. I really do want to--

I beg your forgiveness!
WITHOUT FURTHER ADO 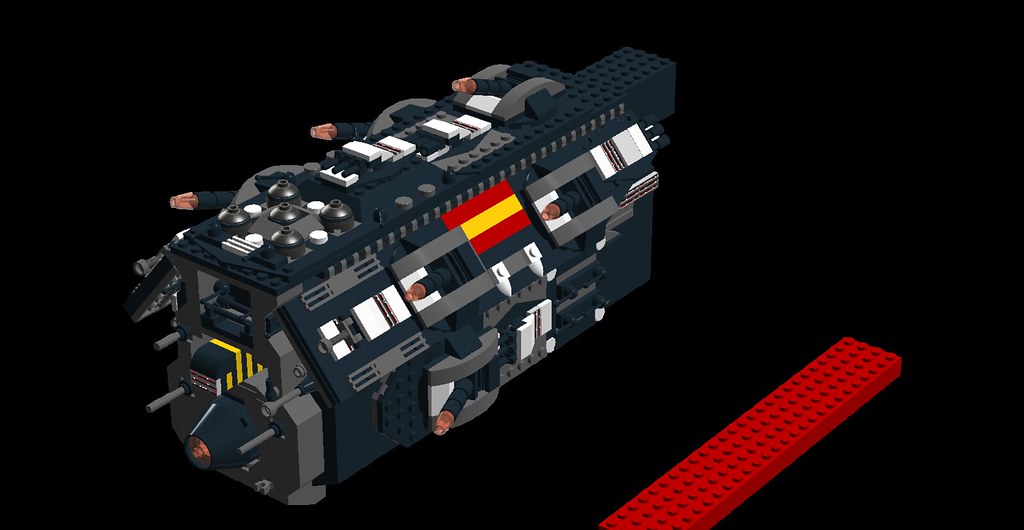 Behold, a good chunk of the top half of the bow of the very WIP EWS Rociante class Super Dreadnought (Colette wouldn't let me make it a Star Juggernaut).
Now, as this is a recent project (because no Spanish navy should have to be laughable

)
Also, this is the FRONT of the ship (should you not know Ship-speak). That OT you see is a super weapon. A small one. 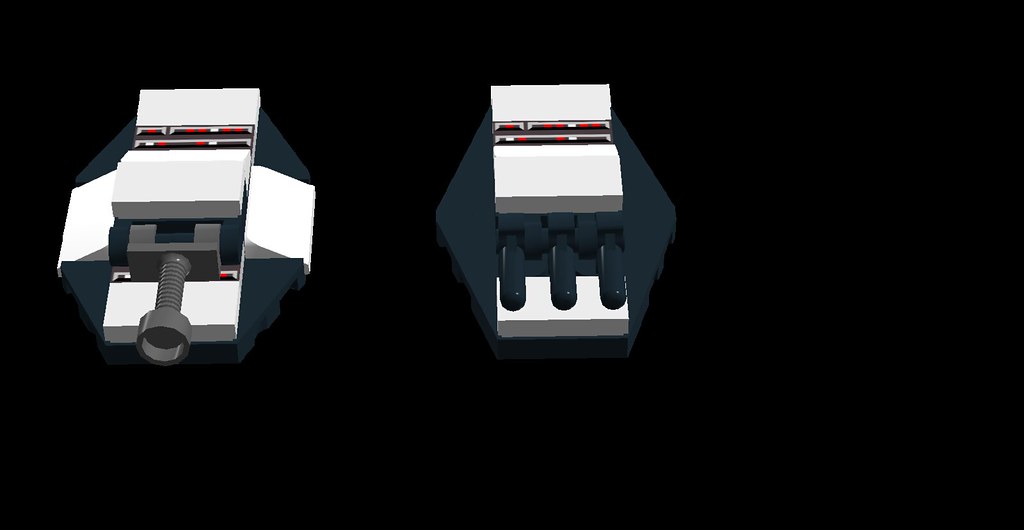 First example of having to change things. If your like Colette and get banished to an iPhone for a time while a parent uses the computer, This is a turret I built (Left) and the traditional Praetorian one that I never (previously) changed from the San Lorenzo V1's days.
Last edited by Vami IV on Thu Oct 30, 2014 11:16 pm, edited 8 times in total.
Top

--Double Post--
I thought I should show you the Concept Art I'm using for this project.
http://img2.wikia.nocookie.net/__cb2012 ... finity.jpg (Image is simply to damn big) 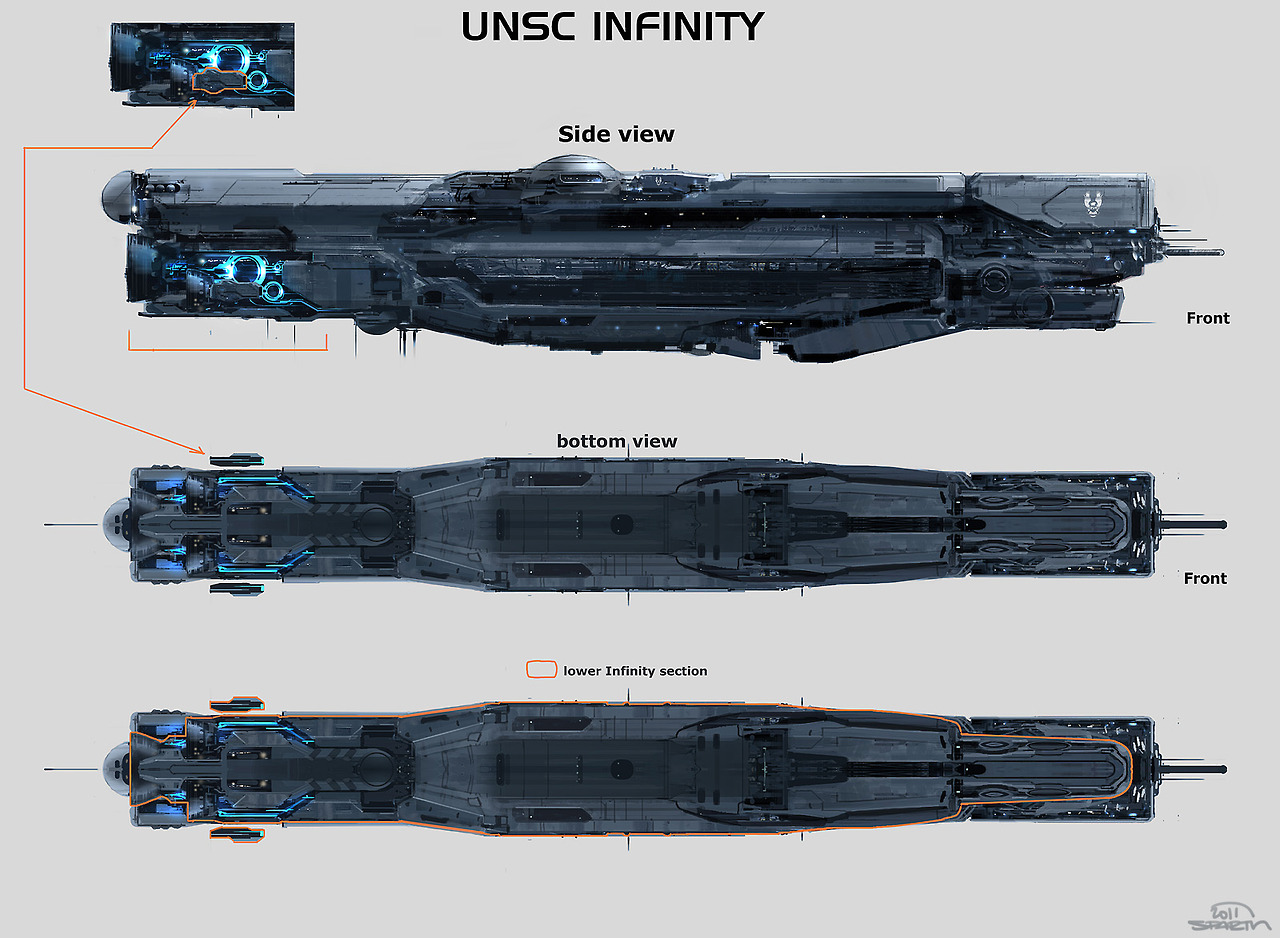 My parents do not use my computer. They just tell me to go to sleep and I can keep chatting on a phone.

Anyway, good start on the dread. It looks inspired, but not plagiarized from, Dilanski's Exodus.

Colette wrote:My parents do not use my computer. They just tell me to go to sleep and I can keep chatting on a phone.

Anyway, good start on the dread. It looks inspired, but not plagiarized from, Dilanski's Exodus.

Thanks. (Keep your Chat Sanctions for now)

I actually stole the idea for the Bow hangar bays from the Spirit of Ragnablok (also a Dilanski if the person reading this isn't Colette, Dilanski, Scythe, or anyone else familiar with Dilanski's work).
Top

Update #6 (#1 if you're not Scratch, Nimja, or BFenix) Ignore the Praetorian vessel in the background until the next pic 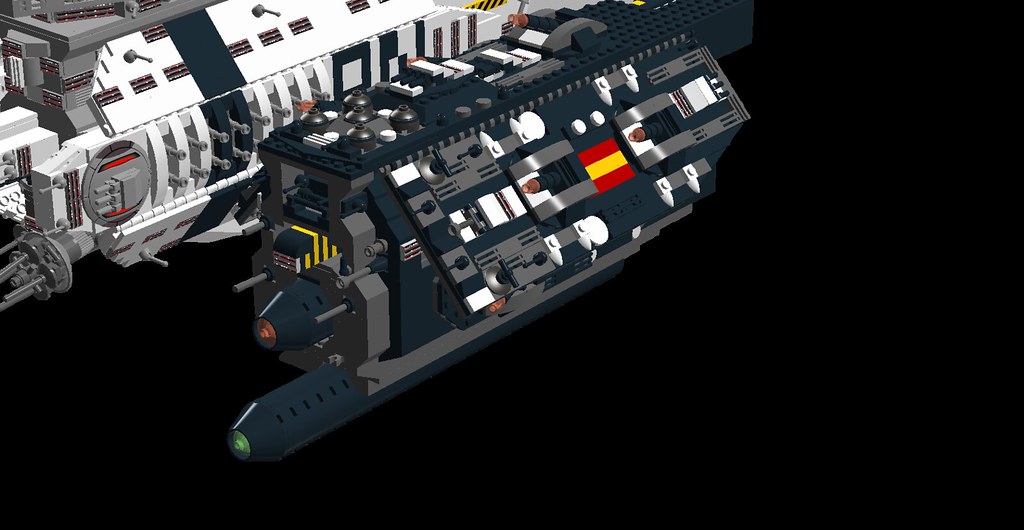 You can stop ignoring it now. That ship on top is the Spirit of Ragnablok, which inspired a fair amount of this model. The chunk of digital plastic under it is just 3/4 of the top of the bow. 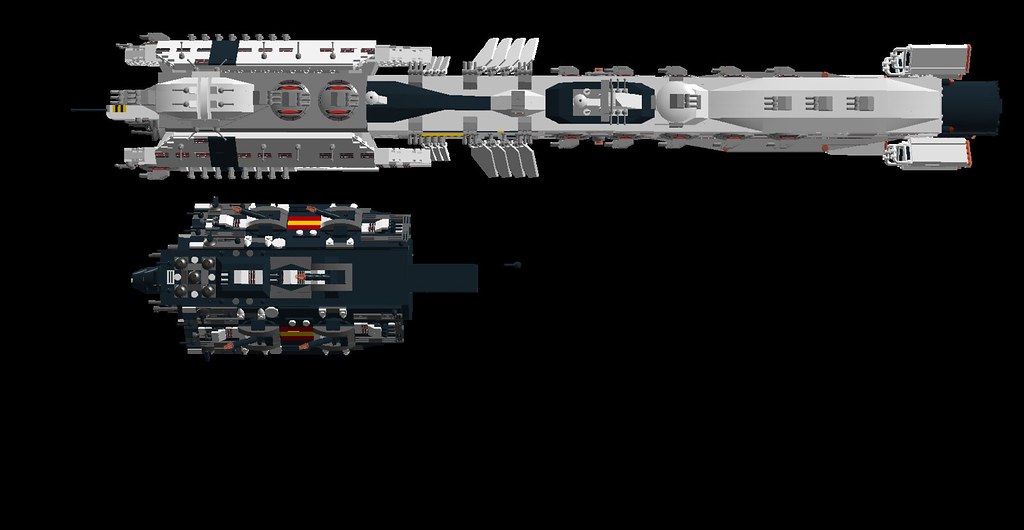 I think you're doing it wrong. You should start building chassis and shit, then build weapons and cosmetics.
Kingdom of Denmark

Yeah, LDD will freeze up if you don't do the big parts first, especially with another big model next to it.

Falk wrote:Yeah, LDD will freeze up if you don't do the big parts first, especially with another big model next to it.

I should point out that the spirit of Ragnablok was only there for a size comparison and is gone now.


Maverick wrote:I think you're doing it wrong. You should start building chassis and shit, then build weapons and cosmetics.

That's how I did start. Check my flickr if you don't believe me.
Top

Wait, what right does colette have to say you can't have a star juggernuaght? If you build it and it looks cool, you have evey right to it.
Top

There's a big part of me that is never impressed by these giant SHIPs. I'd rather see something small, Brikwarsy, and clever than something that's huge and sort of generic. That's probably why I've never built one of my own.

Brikguy0410 wrote:Wait, what right does Colette have to say you can't have a Star Juggernaut? If you build it and it looks cool, you have every right to it.

Colette, via BrikWars Chat wrote:Vami, no. Look at us factions who have built a Star Juggernaut. You're a n00b. We can't have some n00b building a Star Jug. Your army doesn't even have a tank. If you call it a Star Jug, I will employ Canon and Chat sanctions.

Brikguy0410 wrote:...If you build it and it looks cool, you have evey right to it.

Easier said than done for Vami, he's never shown me an original ship, and certainly not one that looks good, either from talent or much practice over multiple ships. In total honesty, I kind of bit my lip a little when Scythe introduced the first star juggernaut, and I wish we could shove the ridiculous genie back in the bottle. But Scythe had produced such a quantity of quality LDD material and may very well be the father of Brikwars LDD, such that you're right, I had no right to complain.

But Vami, a shitposting noob who's contributed less than people with half or even a sixth of his postcount and a notorious plagiarizer in LDD?

I think the contrast is clear. I don't think there's anything inherently stopping Vami from saying his space penis blows stars, but he needs to follow the examples of those who have done so before him and work for it, earning the privilege. Every person who has made a Star Jugg has a quality LDD and/or IRL build repertoire to support it-it's only fair to demand the same of all who want the same in the future. Furthermore, if Vami gets away with this, it will destroy the paradigm created thus far and allow every Tom, Brik, and Harry to extort the same right, citing his example. At that rate, every star in Nehellenium goes kaboom and we tip the BrikVerse kanon balance too far into ridiculous territory to salvage.

And remember- it's not what you say your ship does that matters, it's how it looks. If it looks astounding enough, others will literally make it a Star Juggernaut even if you didn't ask for it (as happened with Fredde's Mastodon).

But remember LDD is like middle school: it isn't real.

Okay, I'm not a big fan of this LDD shit nor am I a big fan of microspace stuff in general, but seriously STFU. Who cares if someone copies someone else? There's no patent on the design or anything and besides, imitation is the sincerest form of flattery. Everyone here copies other people in some way, shape, or form. So don't tell me that he's ruining the forum because of it.

As for Vami being a shiposting noob, I guess you would know more since you have more experience at that sort of thing, Pedonuker.

This is what I managed to do when I said I'd make it.

Kind of began to hate LDD with this, Bavaria, Exodus Advanced and The Next Day, so it hasn't had much love, but have the file as is, and see what you can do with it.

No, it's better than real, it's Digital.

Who cares if someone copies someone else? There's no patent on the design or anything and besides, imitation is the sincerest form of flattery. Everyone here copies other people in some way, shape, or form. So don't tell me that he's ruining the forum because of it.

It becomes a problem in LDD when you can just hit 'import'. Imagine if building IRL had an import button? No reading instructions, looking for parts, or learning how the models go together, just 'import' and you have a finished model. Vami takes a model someone else put hours into, makes 10 minutes worth of changes, then slaps it up with a new name, and he argues, uprated specs (for our eternal game of space cold war).

Ultimately I care more for the fact that often using my models, Vami has allowed himself to skip one of the most important steps of becoming a better builder, without that, he'll never come up with his own designs, which is I hope you'll all agree, tragic. Also, to debunk two of your other points, Imitation is only sincere if effort went in, a 4 year olds finger painting of the Mona Lisa is sincere, someone copy and pasting it into photoshop, then adding a buttplug, isn't. Also, I believe on a LEGO model of any complexity, you'd have intellectual property rights over it.