This is more of a community thread, where we can follow in Vami's footsteps by either modding ships from one faction for use in another, or to post original work that can be adopted by another faction.
Top 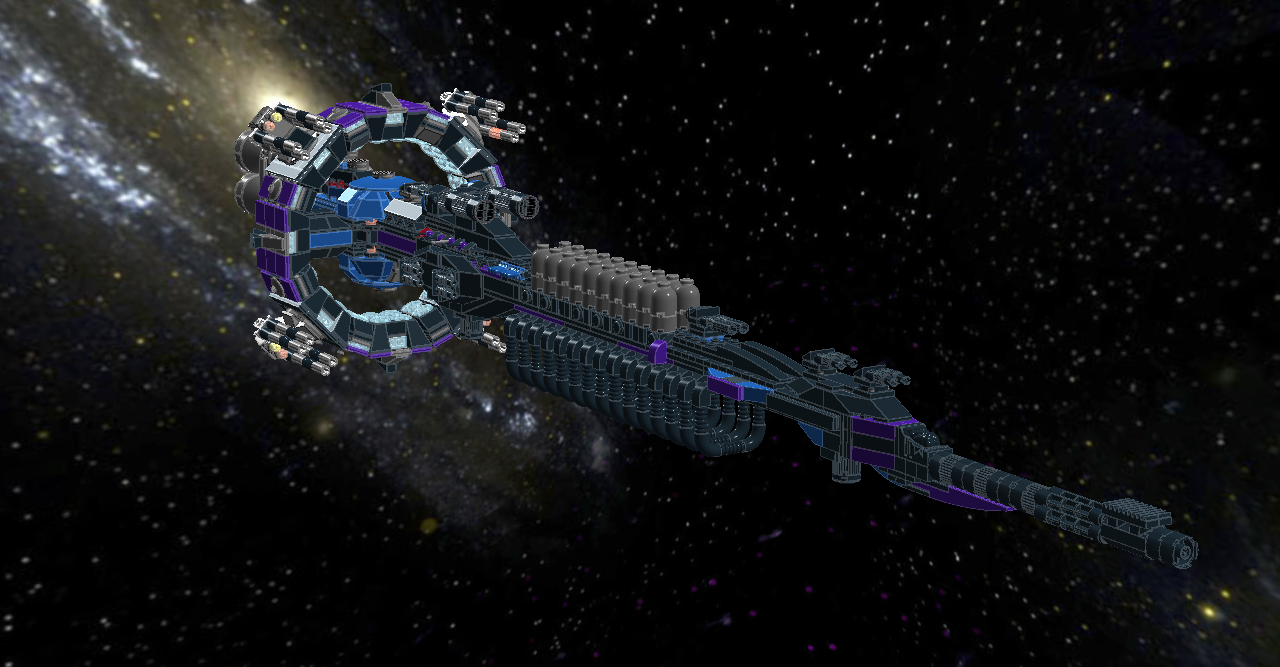 Here's an old one I did of a Britannian second rate battleship. I call it the railgun carrier.
This sig is too fucking large: show anyway


Unlike most nations, Frangerian flag officers do not usually command their fleets or squadrons from the vessels within that force. Instead, command and control is routed to a Dragoon class command ship, where the entire command structure can coordinate the actions of their ships without the distractions imposed by pitched combat. The Dragoon's sensor and communication systems allow it to operate from several systems away without lag creeping into the system.

The product of a joint design project between the Frangerian Protectorate, Britiannian Empire, and the Immortals, the Dragoon has been widely deployed with the Protectorate fleet, undergoing evaluation before it is released to the rest of the IA. The Prestatyn's fighter launch and support infrastructure has been removed and replaced with computer and sensor systems, and several "war rooms" have been constructed within the vessel's hull.

The Dragoon's engine system has been heavily modified, resulting in a much faster design compared to the Prestatyn. The engineering ring was enlarged during the design process, when the smaller ring used on the Prestatyn proved too small to hold the fusion reactor grid that the Protectorate wanted to use.

While the Dragoon isn't intended to be in direct combat, it's role within the Protectorate Navy makes it valuable target, and consequently it is well armed and heavily escorted. In addition to an array of PHASE cannons, the Dragoon also mounts an Immortal plasma quad cannon. The original design called for a heavy PHASE turret, but even with the enlarged engineering ring, the Dragoon's reactor grid was unable to support to run one of the power hunger weapons. Fortunately, the Immortals agreed to provide a supply of their much more efficient quad cannons.

The Dragoon's sensor and communications gear is based on Trattorian technology (obtained through the Protectorate's alliance with the International Space Mafia), and allows the admirals onboard to get a real-time feed of anything happening within a radius of several star systems. Then ship's computer systems are linked into UNICE (Universal Networking Intelligence Computing Entity), the AI responsible for coordinating and organizing the Frangerian military, and each Dragoon acts a mobile hub to tie the fleet it's attach to into UNICE's larger network.

Side by side with Prestatyn.


While the Protectorate's shipyards are for the most part able to keep up with demand for lighter vessels, building heavy ships is much more of a challenge. Dreadnoughts in particular are in short supply, and due to the resilience of most hostile super-capitals, the Frangerians are usually forced to pound an opposing dreadnought into scrap metal in order to knock them out of the fight, so opportunities to salvage them are rare. In order to meet demands, the Protectorate turned to its trading partners in the Britannian Empire to find a solution. The result was the Edinborough MK IIA, a variant of the Edinburgh L.A.D. designed for use in the Frangerian Navy (where it is known as the Paladin Class Fast Attach Dreadnought, or F.A.D.).

While the general hull shape is similar, the Paladin incorporates a number of new design elements that make it an entirely different beast compared to it's Britannian cousin.

One of the most noticeable alterations was the removal of the Edinborough's missile complement, as the Protectorate Navy Logistical Corps balked at the idea of trying to keep the fleet supplied with the thousands of replacement missiles it would need. Instead, the Paladin mounts four Rift Cannons as its primary armament, along with a handful of Fenris missiles. The Paladin does retain the Hellhammer cannon used on the Edinborough, which when combined with the ship's Rift and PHASE cannons, gives it enough firepower to slag anything short of a Deity-class star juggernaut in a single volley under ideal circumstances.

The Paladin carries PHASE cannons in place of the Battle Cannon's mounted on the Edinborough, including a set of four Heavy Phase Cannon Turrets mounted on the ring. The ship's reactor core required extensive modification in order to power the new, more power-hungry Frangerian weaponry. This also means that the Paladin can't be deployed on covert missions, as the new reactor cranks its energy emissions up to the point that it's almost impossible to not detect a Paladin with even passive sensors.

The final modification was to the Edinborough's engines. A pair of engines salvaged from Scythian Tyrant carriers were mounted to the Paladin's hull, giving it a massive speed advantage over most other super-capitals. This did necessitate the removal of the Edinborough's fighter bay, which in turn means the Paladin requires an escort of lighter vessels or carriers, but the Frangerian Naval Bureau felt the trade off was worthwhile.

Ok, new ship, and the first of the unaffiliated designs open for anyone to claim.

Designed to look like a giant shortsword, this battleship-sized vessel is free available for anyone to modify and adopt into their own navy.

hmmm, I'll 'ave it
Phalek empire, S.P.A., Belgïe, My claim to not being a shitbuilder.

Wiedźmin (Witcher) - Looted Light Cruiser
The Krakow Union managed to capture a considerable amount of Confederate Strażnik cruisers, took out it's original armarment and advanced energy generators and replaced it with their own weaponry. The most notable change was an Unholy Standard, that is boosting all of this ship's guns, making it a serious threat forwarships of any size.

I used my Strażnik, repainted it and took some guns from the Krakow Wilk and Wicher ships.

With the release of the Szlachcic Boarding Destroyer, the demand for ships, made by the Lechite Digital Division shrunk down rapidly, and with it their sales. As they still have outdated ships, that never saw combat once and are therefore in a very good condition, the LDD tries to sell their entire surplus to smaller nation, in order to save the company from bankruptcy. 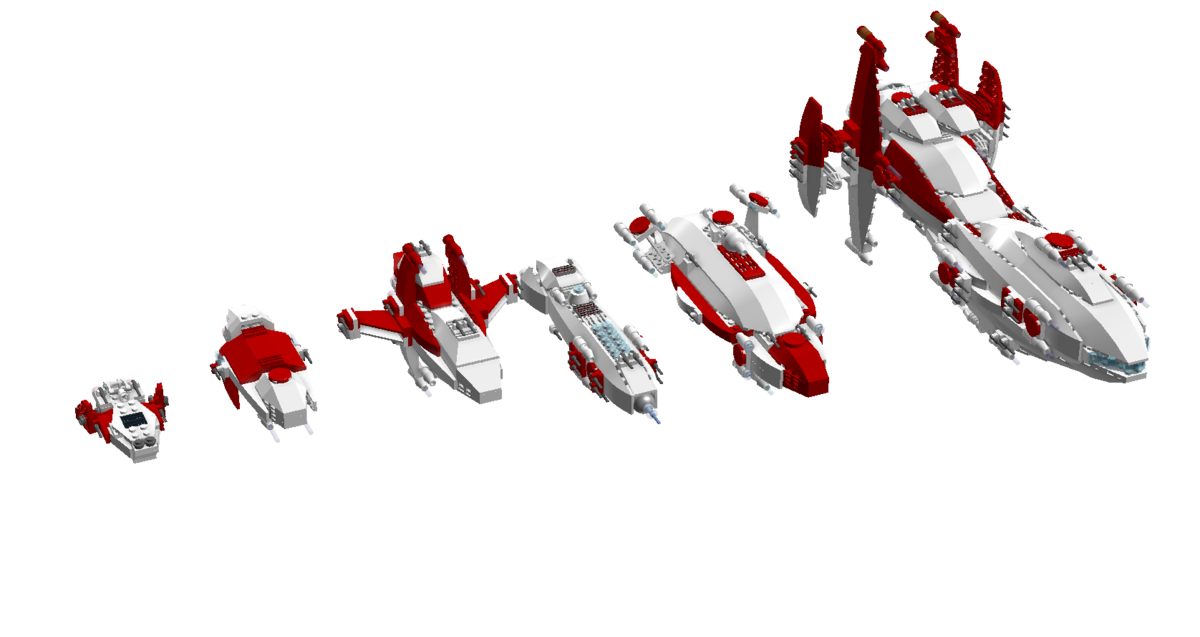 GRAB'EM, WHILE THEY'RE HOT!!

Vami IV wrote:Still waiting for someone to Vami an Emerian ship. It'll happen some day kek

It's not real until it's in the wiki.

stubby wrote:It's not real until it's in the wiki. 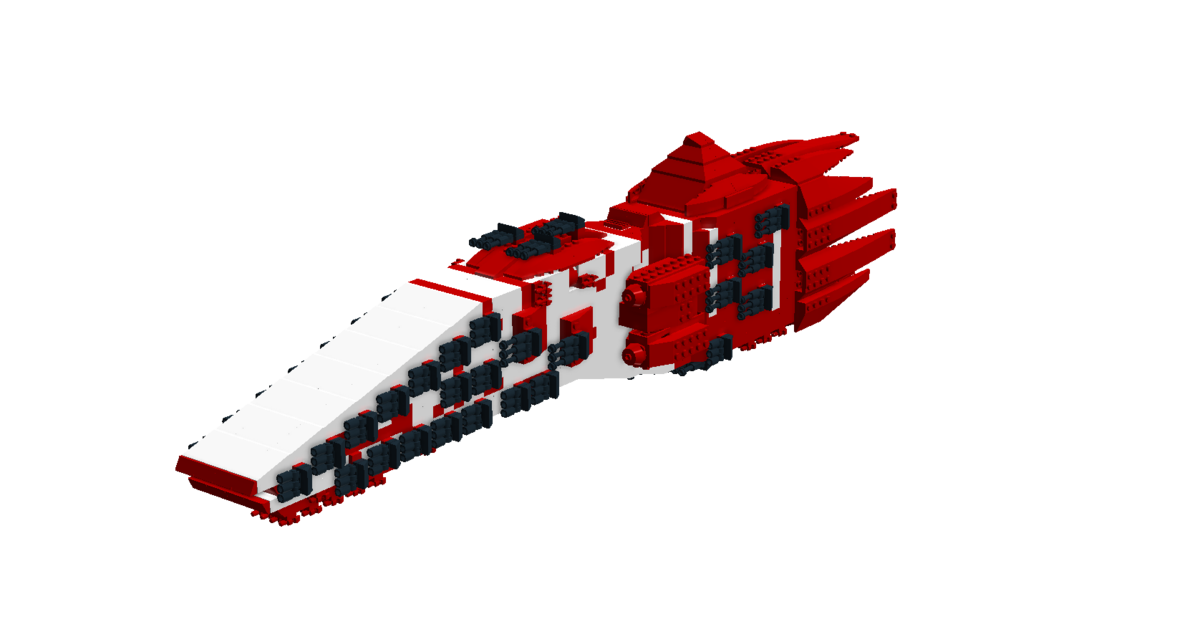 The original Adler Dreadnaught was a gift from Bavaria to consolidate relations with the Krakow Union. 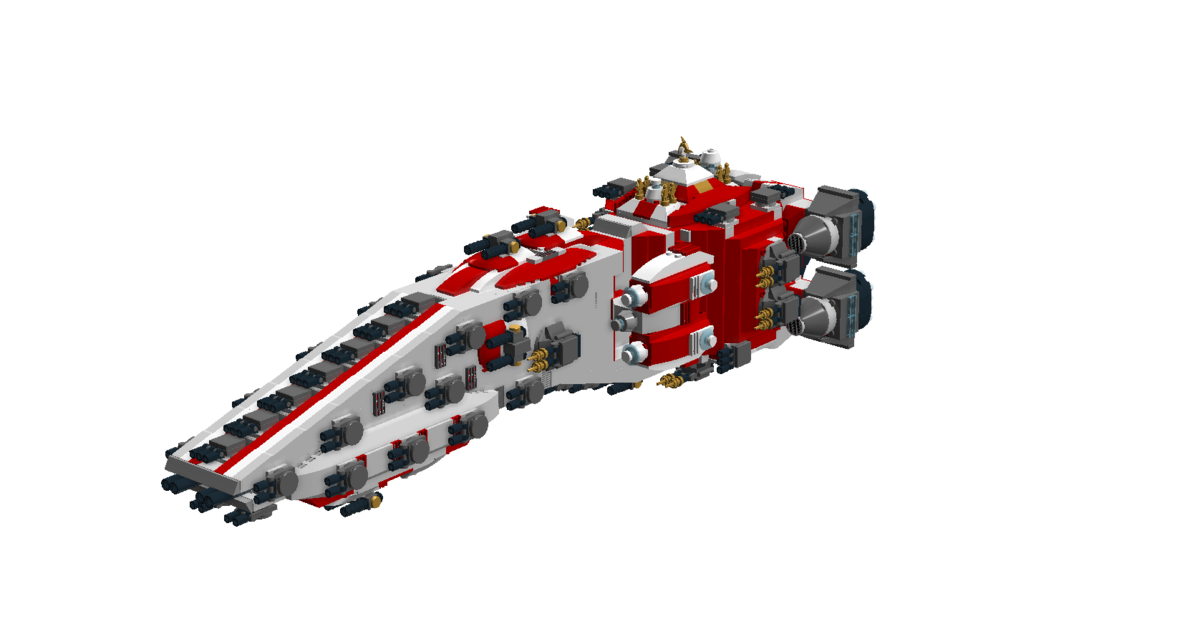 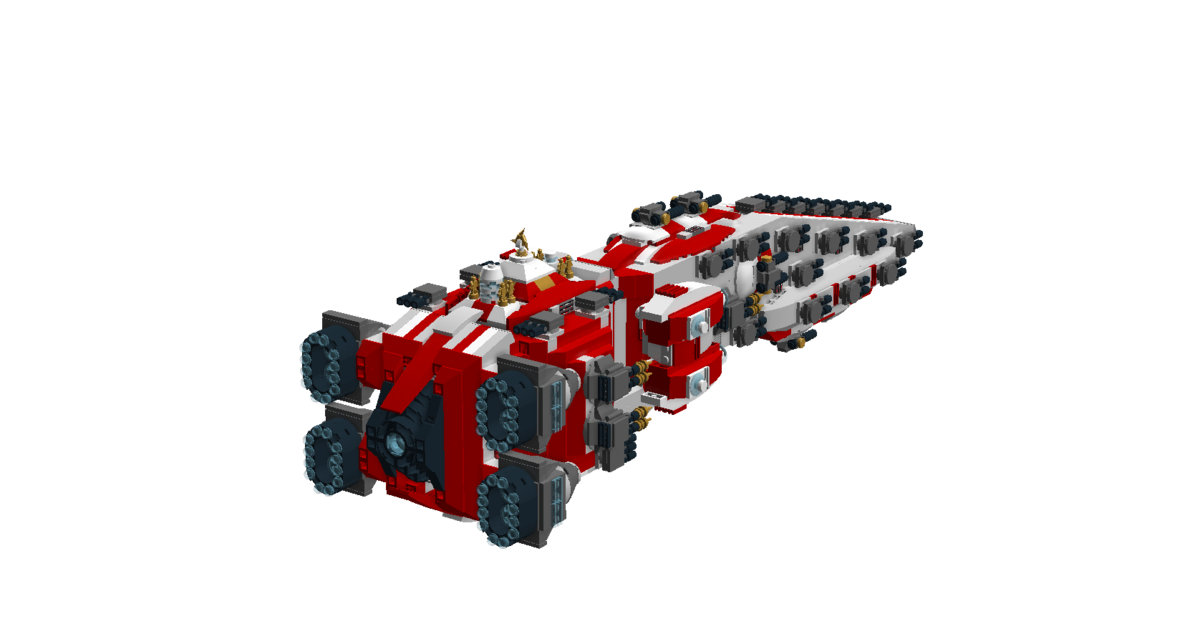 However, the Polish engineers inside the Confederation decided, that a massive overhaul of the ship's was necessary to stand a chance against super heavy warships of other star nations. The Adler Kingsajz has been refitted with bigger guns, better engines and thicker armor, in order to satisfy contemporary needs. 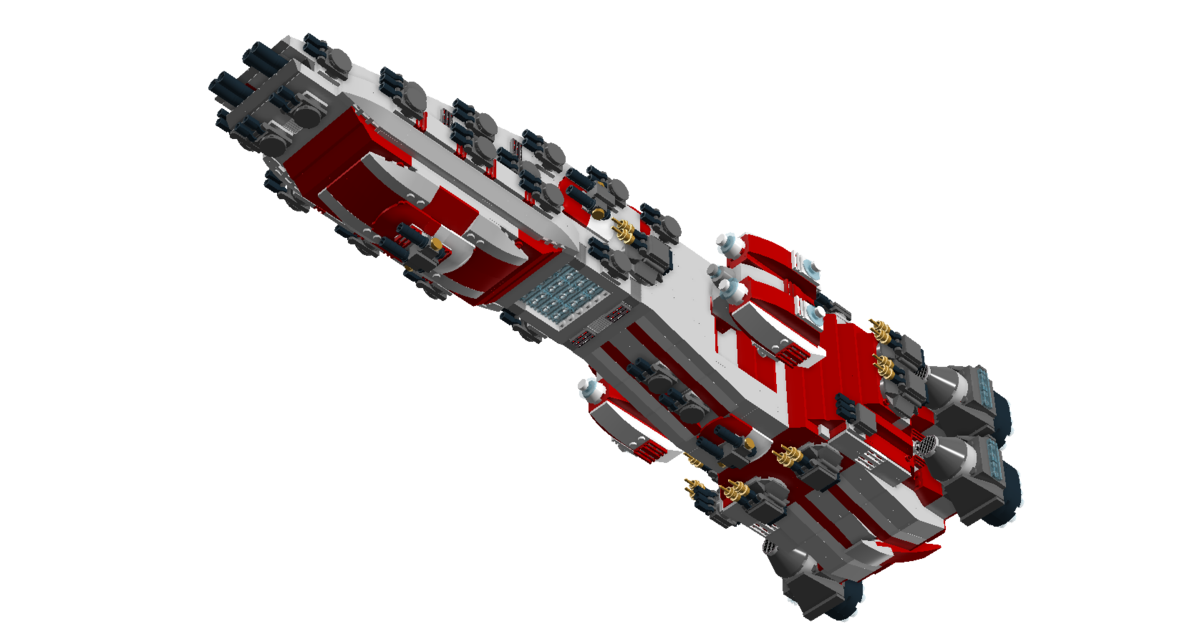 Missile chambers have been replaced by a wide hangar for hundreds of starfighters, that are now located inside the ship instead of the exterior. 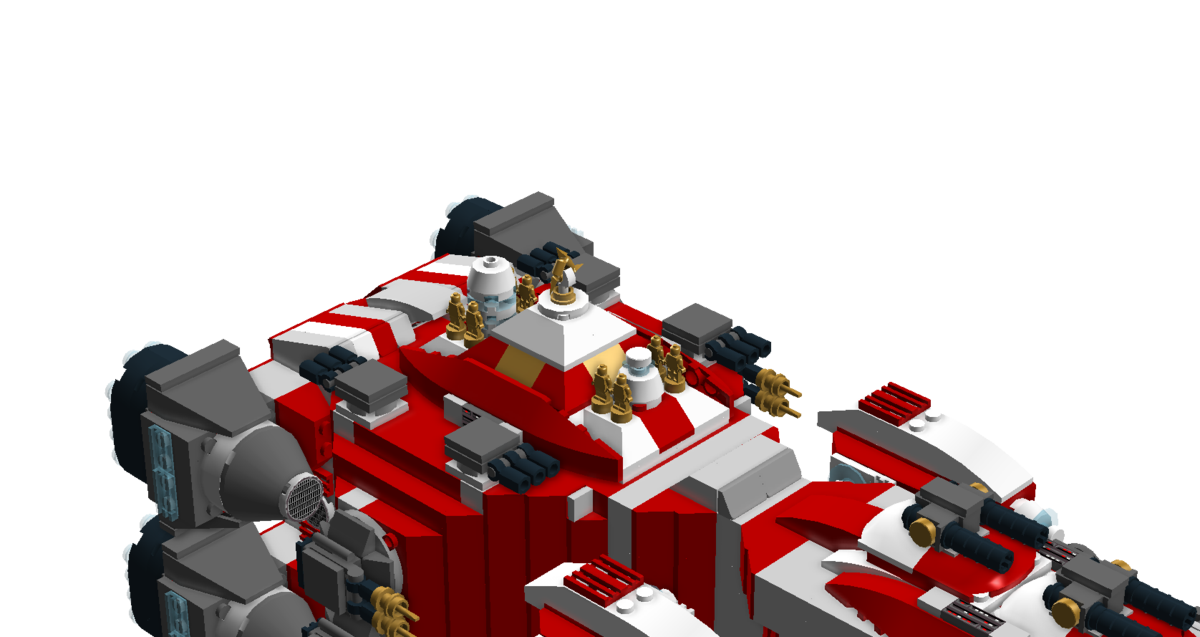 The temple has been refitted with more bling. 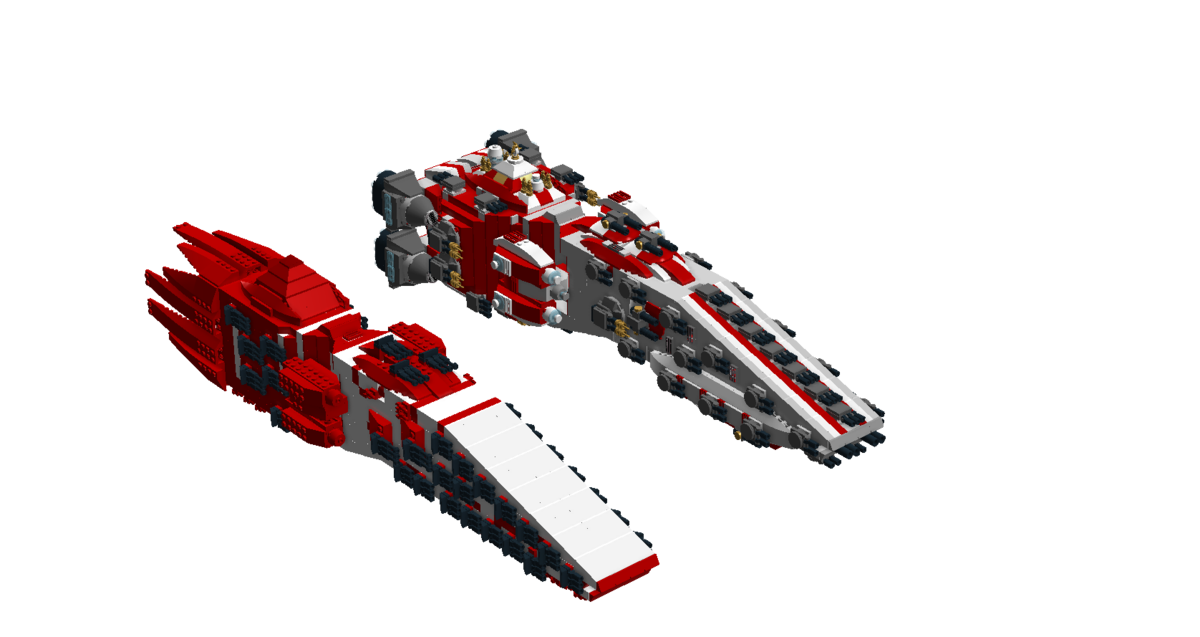 Comparision with the old one