Nice Revelation. I like the sleek look and the giant NATO logo on the side.
[21:30:33] Scritch: you can put it in theblackdog

Theblackdog wrote:Nice Revelation. I like the sleek look and the giant NATO logo on the side.

Oh wow, I forgot about the Rev. The original was a mix of that, the Abaddon, and some weird star wars expanded universe ship I found. Although it's a shame this vessel isn't as imposing as an actual revelation.

The constant battling between PAEN Systems, MoA-MRAD & Stalker Dynamics for national defence contracts and even more importantly, precious RARCom developed tech, has for the most part been beneficial to the Praetorian states military procurement, however, this has led to a lack of innovation, with these companies looking to compete conventionally, rather than asymmetrically. For this reason, replacement of sub-cpaital vessels has been held back for the better part of several years (Vanguard Class frigates date back to 2011, the unmodified hull to 2010).

Finally progress was made with Stalker Dynamics development of the Dragoon Interceptor. Below the modern Frigate classification, this vessel showcased RARComs Inertial Polarisation technology, which allows for the remote excitation of haggis bosons, essentially increasing the friction coefficient of space, stopping larger ships dead, and putting the brakes on nimbler craft.

This new vessel drew the attention of MoI, who wanted the technology scaled up. The requirements for this new vessel were hefty, it needed to have increased range on the IP, as well as multi-target capability. It needed to match the speed and agility of smaller vessels while maintaining a Destroyer profile. MoI needed compatability with there NullSig stealth technology, but also wanted to keep the low observability stealth to allow for better sig tanking, and pair it with long range intense passive scanning equipment, equivalent to those possessed on RARComs Universaerium Infinite. As a final request, MoI wanted 120 day endurance for the vessel.

The apex stealth predator MoI was after was deemed impossible, the number of techs simply too many to fit onto a hull. It was only when RARCom suggested the groups should, shockingly, work together, did the vessel begin to come together.

Enter the Apex, a Hunter Killer built for long range stealth tracking and ensnaring. The hull maintains low observability stealth, with active jamming making the vessel invisible to standard ship scanners, before NullSig kicks, effectively removing any trace of an Apexes presence. To keep the vessel manueverable, Stalker implemented a vectoring primary engine, more radical than designs seen before, for a vessel of its size, it can effectively pull off fighter level manoeuvres with twtichy responsiveness.

PAEN produced the weapons systems necessary. The vessel was deemed too fast to allow any turret based weapons to effectively track there targets, instead, PAEN mounted a set of 6 fixed pulse lasers on the front, serving as the sole offensive weapon system. To meet the endurance requirements necessary, MoA produced its most advanced automation systems, rolling out its latest self maintenance and repair systems. It's crew just 25 compared to the smaller Deathstalkers 70.

The success of the full uncut Black-Operations variant of the hull will never be known. More than likely these vessels will, like MoI's other vessels never be anything more than a momentary blip on a short range scanner. However, like the Deathstalker before it, and the Megalodon before that, these vessels will serve in a cut down stealthless form under FleetCom.

[N.B. Very sleep deprived when I wrote this, sorry for my shocking lack of a grasp of the English language]
Last edited by dilanski on Mon Jan 26, 2015 9:13 am, edited 1 time in total.
Almond Status: ACTIVATED
Top

You took my design and ran with it, and I love the results. The lines flow really well and the ship looks both fast and menacing. Awesome work.
[21:30:33] Scritch: you can put it in theblackdog 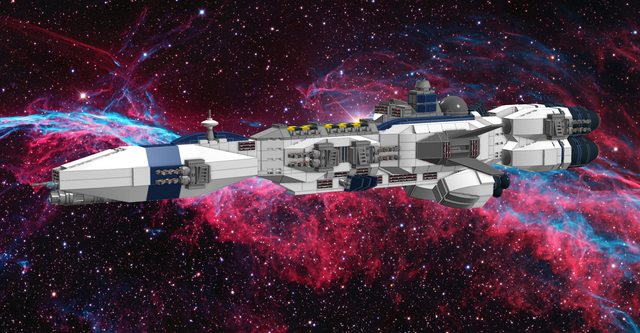 As new factions began popping up capable of producing now widely proliferated Super-Capital and even 'Third-Gen' Dreadnoughts & Juggernaughts, calls for a new Battleship platform became louder. When facing a superior Dreadnought force, deploying fast moving battleship squadrons to out track and out manoeuvre the enemy behemoths under the cover of their own heavy guns is the preferred tactic.

This requires a battleship capable of incredible speed to close distance, then make an egress should they be primaried. Also necessary is enough firepower to break through the defences and conflict damage enough to render critical systems inoperable.

The Heathen frame was clearly incapable of this, lacking the structural rigidity to mount the required thrusters, however the basic design was still considered highly effective. 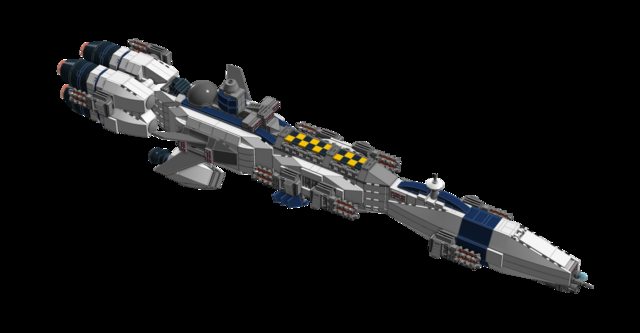 Enter the Heathen A330. It may share aesthetic similarities with its namesake, but the spaceframe is new from the ground up, built to withstand the force of its 8 engines, and the increased turning capability. 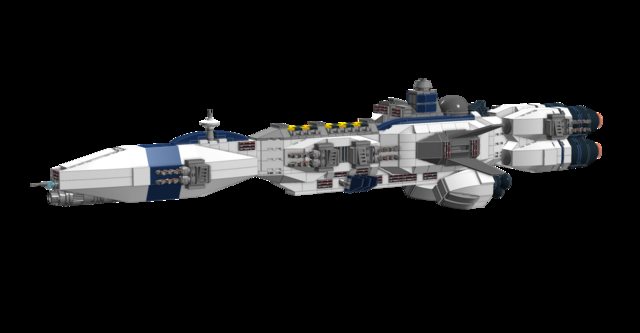 Armament is similar to the Heathen A220 (Heathen Advanced), 4 extra vertical launch missile tubes have been added, and the missiles within swapped from Red Rum warheads to a two stage Magnetic-Nuclear . Designed to create a localised break in the enemy shields before impact, only a few metres in area, to then give maximum effect of the Nuclear warhead, and its EMP effect, with a goal to knock-out critical systems. The Fire-Torrent turrets have had a slight 5% bump in fire rate, accompanied by a new cooling system. The biggest improvement has been to the 'Penultimate' HI-Yield laser system, its footprint inside the vessel has been increased, resulting in the much larger forward section of the vessel, this extra space has allowed the fitting of a laser polymation array, replacing the original single laser aperture, with 5. These lasers are combined in the polymation array, to greatly increase beam strength. 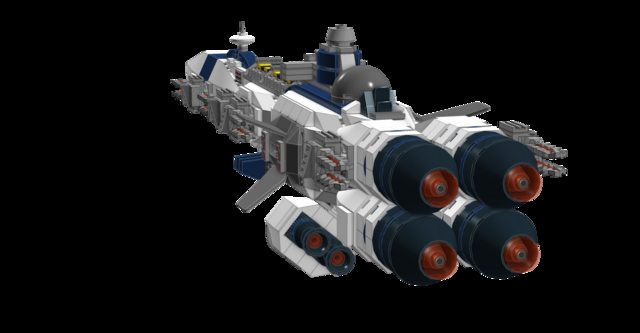 The rollout perido for the A330 into service is expected to be 5 months, a rather long period considering the 2 month period for the Exodus DN220 (Exodus Advanced), and 1 month for Heathen A220. Analysts have pointed to the production capability being used to replace vessels destroyed in combat with Bavaria, although some conspiracy theories of Praetorian secret extra-galactic shipyards, accounting for up to 20% in production, being used for some other purpose.
Almond Status: ACTIVATED
Top

Oh, I wanted to ask you, as some vessels often come in revisions, how do you want to handle that? Having 5 (well, 6) Monarch pages would get pretty painful.

I'm currently going to go with "Heathen Series", but change it if you think it should be something else.
Almond Status: ACTIVATED
Top

Vami IV wrote:I just edit the page that already exists for the ship / item. If there's a new version, I change and/or add information to the page, add and change photos, and boom. Done. I think El Burro is the best example of what I do with multiple versions of the same ship.

The Heathen might require a second page, but I think we can still squeeze the two major versions of it into one page.

Well, I've done a quick'ish version of what I think looks best, but if you have a better format, try it. I also need to figure out how to justify these damn info-boxes correctly. If I stick them all at the top, they become staggered.
Almond Status: ACTIVATED
Top

That's one of the sleekest, most intimidating silhouettes I've seen in lego form. Like a shark with rocket boosters.
[21:30:33] Scritch: you can put it in theblackdog

High end carrier capability has long been neglected by Praetorian military planners, instead, their military strategists opted to deploy battle carriers, such as the Insolent Class. With the end of the Bavarian and Third Alliance conflicts, the mission of Praetoria's space forces has changed, from one of planetary bombardment and fleet engagements, to power projection. With a looming Immortal threat, the Dreadnoughts and Battleships that filled the fleets ranks were incapable of maintaining a large presence across Galaxies.

Fleet carrier tactics were necessary, to maintain the presence necessary to ensure Praetoria's scattered assets could be defended. With production on Exodus DN220, and Heathen A330 production stalled, creating a new Super Capital, especially one that strayed so far from Praetorian shipbuilders area of expertise, took time, and numerous design revisions. Amerikan designers were brought in to advise on the vessels systems, and Trattorian talent was brought in to oversee prototyping. The final design was dubbed the Citadel F110, a name that properly describes the starbound cities that have been built.

A Citadels best weapon is its fighter groups. A high speed surgical tool, capable of destroying critical systems on dreadnoughts, and delivering precision ordnance against incoming threats. A citadel carries two full fighter groups. Each group is composed of 3 fighter wings, and each wing contains 3 squadrons of 12 fighter craft. Alongside these fighters are a number of specialist groups, including reconnaissance, and bomber groups.

Citadels, do however possess a powerful extra weapon system, in the 20 Red Rum X missiles. The latest evolution of the Red Rum series. Incorporating the two punch effect of the Nuclear-Magnetic warheads used on the Heathen A330. The gravitational charge has been augmented with a secondary antimatter charge.

Deployment has been initially to the frontier colonies, and the Beach heads within Nehellenium.
Almond Status: ACTIVATED
Top

I like the flat design of that one. Where do you get all these space backgrounds, tho?