The sun had barely risen above the tallest reaches of a mountain range somewhere in the Norselands as a group of warriors and villagers alike set off on a journey that would, hopefully, change their very lives. It was a caravan so to speak, a trio of wagons pulled by both oxen and horses. Guarded by a handful of wary militia, this caravan was on an important quest to settle below their mountainous home and establish an encampment that would commune and trade with the people of outside factions.

The wagons carried lumber, building supplies, gold, and food. Enough food to last them a few weeks, enough lumber to build their post and small dwellings, and gold to be used in the future for trade. Two of the wagons were quite nearly over encumbered with supplies, while the wagon hauling the gold was left purposefully light. Who knew what sort of bandits they would come across, the less valuables they had the more of a chance they wouldn't face unnecessary hostilities. 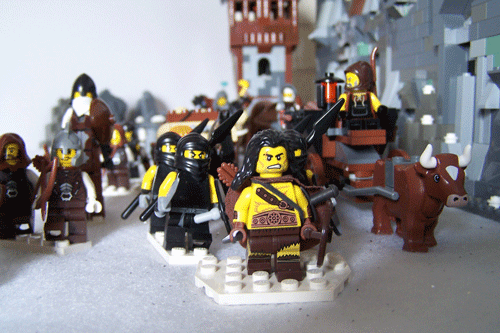 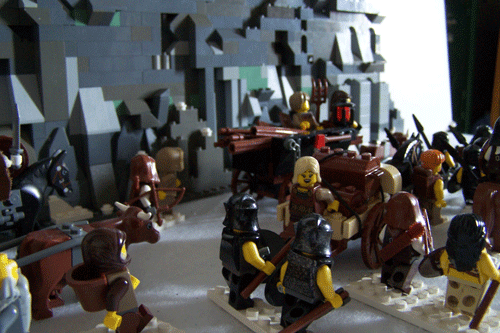 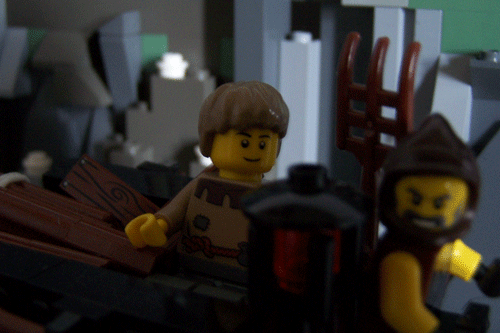 "How far are we supposed to be going?” Shouted Grith, an apprentice blacksmith. He sat at the back of a wagon full of lumber as if he were making sure the wood would stay secure, but he was really just tired of walking.

“When the mountain becomes level with the ground,” growled his uncle through gritted teeth. “Don’t you ever pay attention, boy?”

Most of the pilgrims had been silent during the course of the morning, many of which were probably still groggy from the near-sleepless night of preparation before. Most of the words that were spoken were traded between the villagers, almost all of them being quiet observations that received even fewer-worded responses. 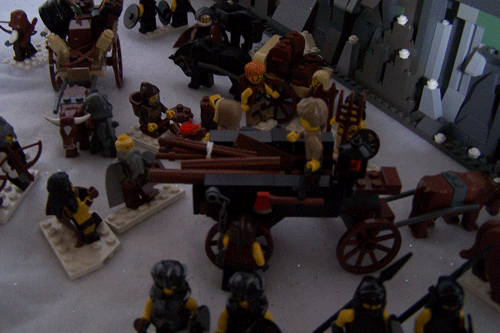 The day dragged on, as did the caravan. Night would be soon upon them so Farcus, the leader of the band of wagons, issued an order to stop for the evening and rest up to arise early the next morning. Bed rolls were opened and a cook fire lighted, and just as the dark of night crept upon them they were already fast asleep. 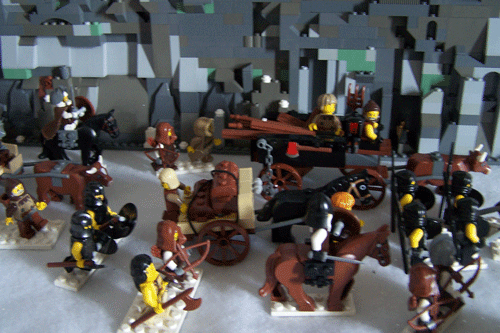 Morning arrived all too early for the pilgrims, but they set off with gusto and continued down the mountainside. Compared to the day before, the group made impressive progress. They could feel the climate very slowly change, the cold they had grown so used to begin to deteriorate into something a little warmer. The feeling it left on their skin and the surprise that they could no longer see their very breath left them curious. What other weatherly changes would they encounter along the way?

By mid-afternoon, rocky outcroppings began to appear along their path. Sure, rocks weren't an uncommon sight when on a mountain, but the route had been almost completely clear of obstacles until this point. At first, they looked like normal clumps of stalagmites and stone, but the same cluster of similarly formed outcroppings had soon become more and more common. A few of them even gave away to strangely shaped slabs of stone underneath, almost as if years of erosion and rock slides had unearthed something underneath. This made some of the journeymen a little nervous out of old superstition.

Farcus motioned toward his squad of militia to follow him, leading them just a little ways ahead of the caravan to scout out the strange ruins.

"What the hell is under here?" One of the militia ranger said as they approached another stalagmite.

"Hard to say. Perhaps there used to be a temple or castle here? Whatever it was, it's just a bunch of rocks now," replied the ranger officer.

A piece of rock from the mountainside just in front of the caravan burst apart, raining down debris and snow. From the resulting hole now in the mountainside stepped an armored corpse, an ancient and long-dead warrior. It raised it’s brutish sword at the militia and spoke in a raspy tongue unknown and more than likely lost through time. How the corpse could even produce such speech from rotted vocal chords and lips further shocked the party.

Then as if on command, a number of stalagmites burst apart and more undead warriors awoke from their slumber.

"Defend the wagons, protect our people!" Farcus yelled to his men as the nearest undead warrior approached him. He waited as the creature was in range for close combat and sluggishly rose it's sword arm to strike then he bashed the long-dead soldier in the face with his shield.

Then as the skeletal warrior was momentarily stunned by the blow to the face, Farcus promptly sliced off its head. One down.

Meanwhile the other recently risen undead took advantage of the two still-shocked rangers.

And deftly sliced the captain's neck open. It would appear that not all of the undead are as slow as they look.

Recovering from his shock after seeing his captain fall in a flash of cold steel and blood, the surviving militia ranger jumps back to give himself enough time to pull back an arrow.

Under the combined fire of the ranger and slash of the swordsman, the undead soldier falls, an arrow sprouting from the cavity in it's chest.

"C'mere ya smelly pile o' bones!" Jeered one of the militia swordsmen toward the first of the undead, irritating it enough to provoke it's attack.

After exchanging a few blows and parries, the heavy-armored skeletal soldier is finally brought down with the help of a mounted militia.

"With haste, get back to the caravan!" Farcus shouted to his men as they quickly obeyed.

Meanwhile, the back of the caravan wasn't faring much better. Just as the entombed warriors at the front broke from their rest, more seemed to raise from the ground behind them.

An undead ranger fired at the caravan and the arrow struck true straight through the back of the neck of a clueless villager.

The hooded stranger, like the surrounding pilgrims, react accordingly.

Except the stranger sighs with relief and jumps down from his wagon, clutching a dagger in his hand.

He sprints toward the fray while wielding a midnight-hued sword in his free hand, aiming to squeeze between two heavy-armored militia. After but a second or two, the stranger successfully makes it past the militia, who lower their weapons and stare after him in dumbfounded surprise.

"Coming through!" The stranger replied, a smile slowly growing on his face as he approached the skeleton, which looked just as surprised as the two militia did.

Before the crossbow-wielding skeleton could load up another bolt, the hooded stranger had already sliced off both it's arms. It collapsed as the stranger held his pose in a poor attempt to look badass. The rest of the undead are picked off by another horseman and the rangers.

Hours had passed after the battle. Those that were slain during the skirmish, the captain and villager, were laid to rest where the villagers could find deep enough snow. They labored for awhile while burying their dead, and though it seemed pointless to waste the energy when all they had dug through was snow and stone, the villagers found it the only way to honor them.

"I don't know who you are, but that was quite an impressive stunt you pulled off back there," said Farcus as he approached the hooded stranger.

"Oh, that? I just wanted to put some knife skills to the test."


Farcus only shrugged and dismissed himself. Soon they would set off again to finish their descent and off into the unknown. The caravan was safe again and one by one the pilgrims paid their respects and pack up their things. Once again they were on the road down the mountain, each and every one of them hoping that that this first obstacle on their trek would be the last.

Very well done, I can't wait for part 2.
The only unflawed system is Lego System.

I'm betting that they should have burned their fallen's bodies instead of burying them.
This sig is too fucking large: show anyway

Thank you and perhaps that is true, Silver.

Very nice. This has a Banner Saga vibe, you ever play that game?
Westeron Restored (Fantasy BrikWars)
My Twitch - My blog
Top
Post Reply
9 posts • Page 1 of 1