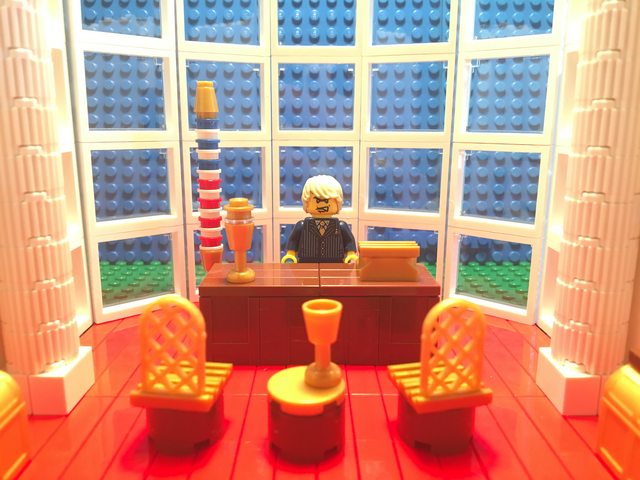 Chief of Staff: Mr. President, your 5:00 is here to see you.
Dolan Trump: Alright, send him in. 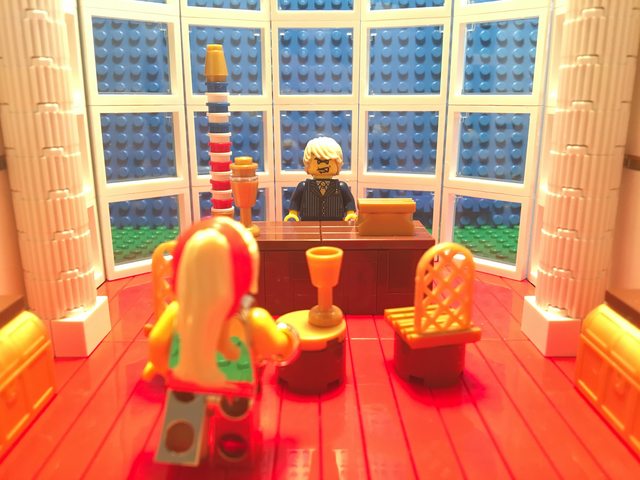 Dr. Kirisaki: Good afternoon, Mr. President. I’m Dr. Kirisaki, Chief Executive Officer of Goldman Sucks.
Dolan Trump: Hey, he didn’t tell me it was a gurl. Say, that’s a nice ass you got there, mind if grab your pussy? 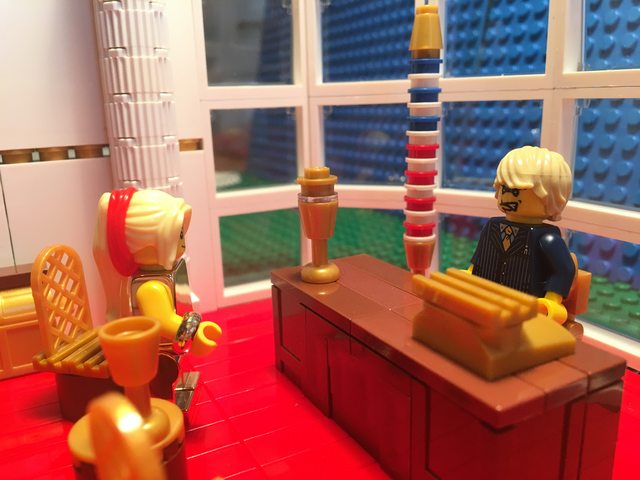 Dr. Kirisaki: I’m here for two reasons. I’m here to tell you something, and to ask something from you.
Dolan Trump: Is it my yuuuuge dick? Let me tell you, no one has gotten a yuuuger one than me. 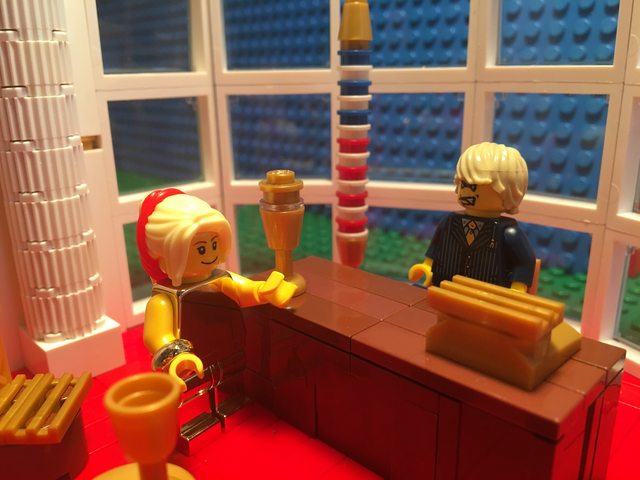 Dr. Kirisaki: Well, perhaps “ask” is the wrong word. You see, the firm has already enlisted resolutions from over half a dozen major galactic powers already, including Trattoria, Assyria, Scythia, Praetoria, Galacia, and Britannia, thanks to our influence and infiltration of their governments, so we don’t even need your pitiful USA for what we’re planning. And since we own your Congress and your administration too, consider your personal agreement to the firm’s demands as a mere nicety to smooth the process along.
Dolan Trump: Hey, get your arm off my desk! 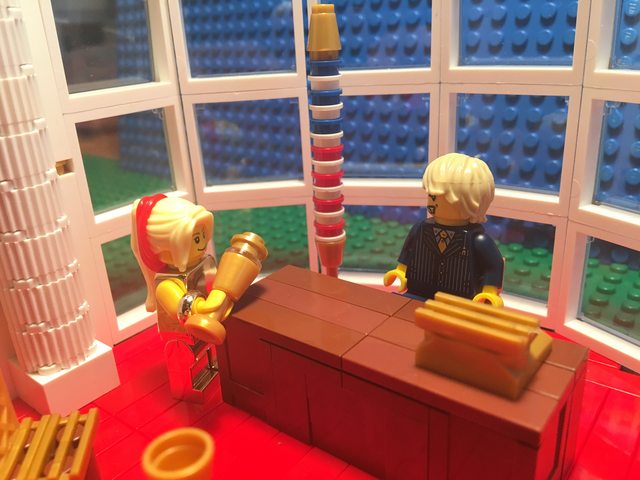 Dr. Kirisaki: A nice lamp. Too bad it’s not chrome gold.
Dolan Trump: Hey, get your hands off my stuff, or I’m summoning the Secret Service. 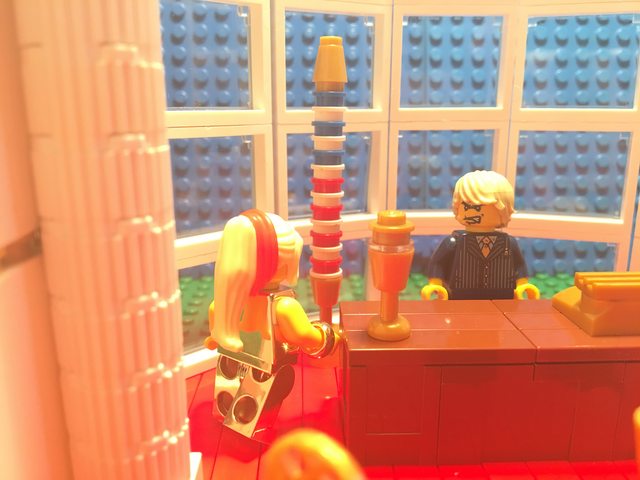 Dr. Kirisaki: Your stuff?
Dr. Kirisaki giggles.
Dr. Kirisaki: Let me tell you what I have told the past two USA presidents before you in my time as CEO.
Dolan Trump: Hey, don’t get any closer! 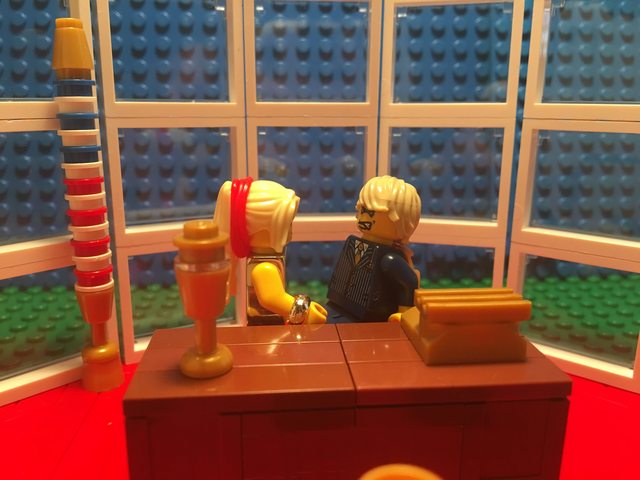 Dr. Kirisaki: Let me make myself absolutely clear. Goldman Sucks owns you. Just as it owns every politician, every thing, everywhere that matters in the Nehellenium Galaxy. Do not deceive yourself for a second into believing that you are in charge - we are.
Dolan Trump: Loser! I campaigned to make the USA great again! I’m going to help ordinary Muricans reclaim the country that the Wash-a-ton elite stole - 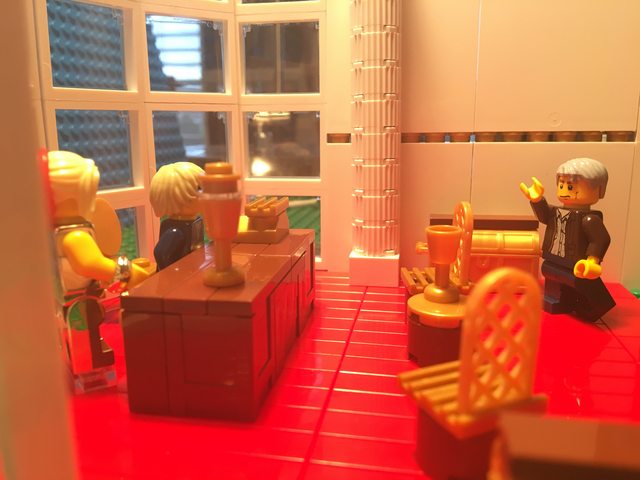 Stephen Banner: Hey, save the line.
Dolan Trump: Steve? What are you doing here? 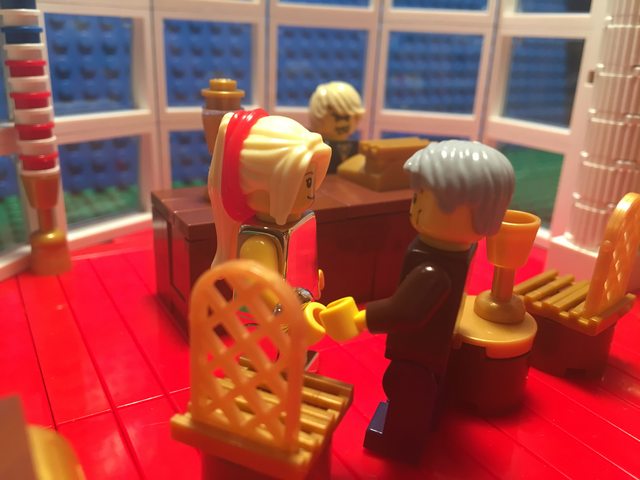 Dr. Kirisaki: Long time no see, Mr. Banner.
Stephen Banner: Same to you, Dr. Kirisaki.
Dolan Trump: Steve is my most trusted advisor! How the hell do you know each other? 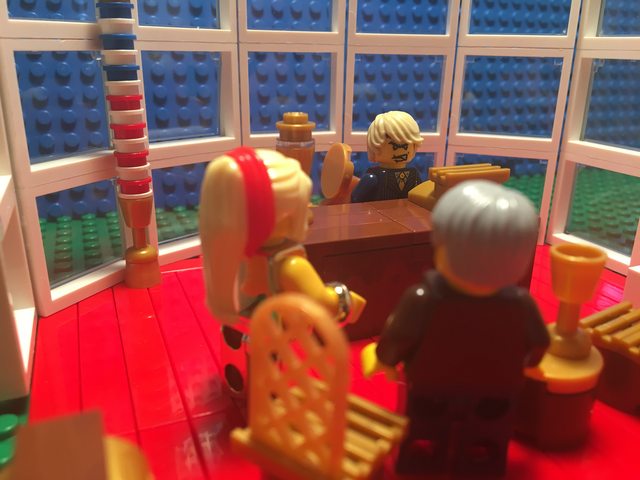 Dr. Kirisaki: He used to work for the firm, you see.
Dolan Trump: That’s impossible!
Stephen Banner: It’s true, and you better do as she says. 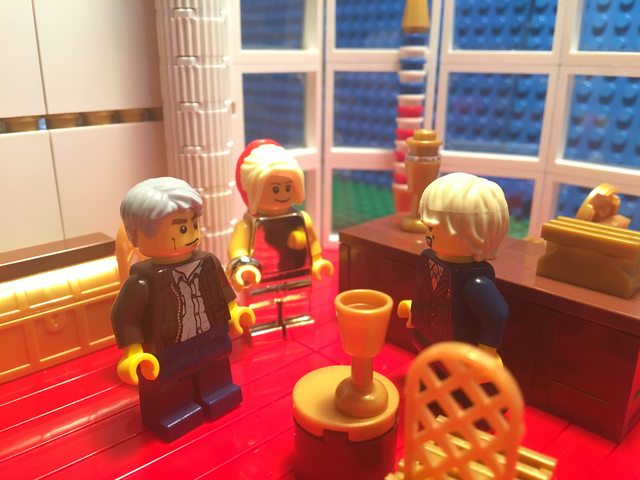 Dolan Trump: Why the hell should I listen to this bitch?
Stephen Banner: It’s for the good of the country, Mr. President. It’s for the Murican people - you trust me and my vision for this country, right? 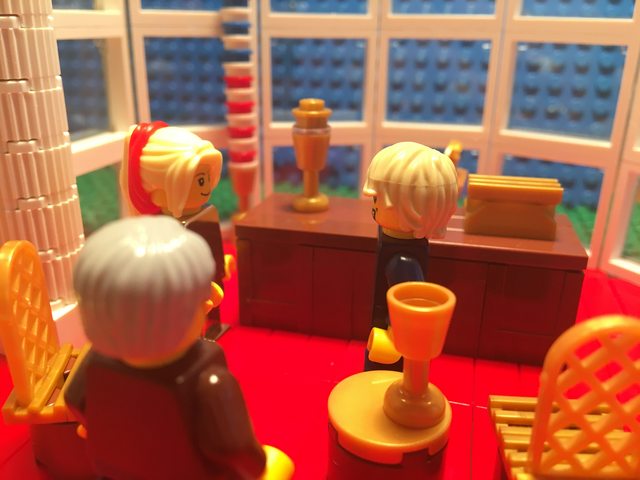 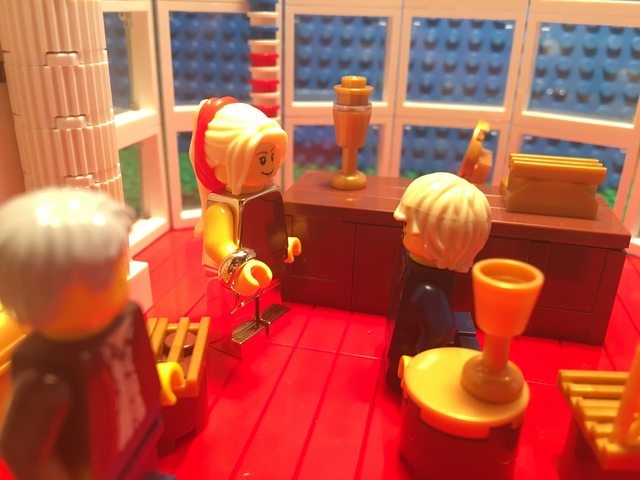 Dr. Kirisaki: Good, now you truly understand your relationship with the firm. Here’s what the firm wants - the entire better part of the galaxy that I mentioned before is about to declare war and invade the Imperial Magikstrate since they won’t get with the program.
Stephen Banner: Yeah, those damn dirty peaches will steal Murican jobs with their dirty magik!
Dr. Kirisaki: We’re going to pave the way for the reign of deregulated capitalism and, erhm, “democracy” in the IM. Since the USA is already at war, you will not get in our way and you will assist the invasion force when it gets there. We don’t need any of your bitchiness or edgy unhelpfulness when it begins. Is that clear?
Dolan whimpers. 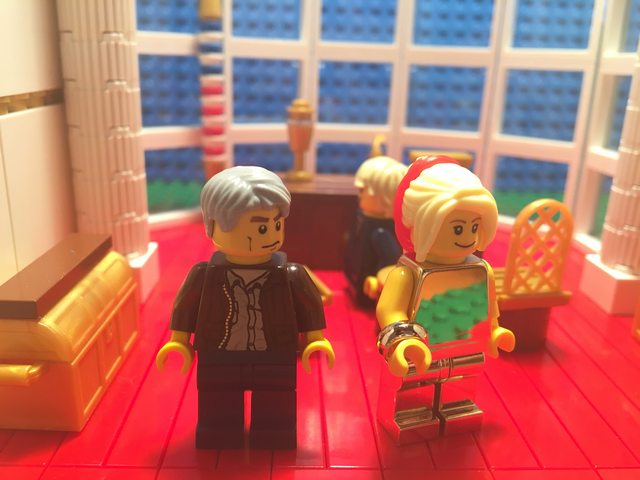 Dr. Kirisaki: Very well, we’re done here. I have a meeting in Trion in half an hour anyway. 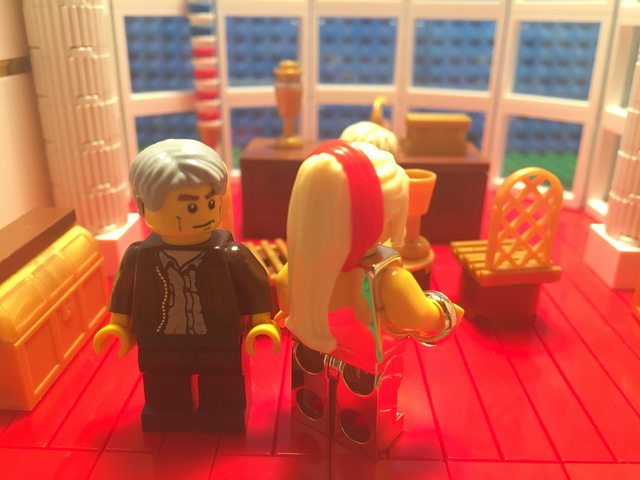 Dr. Kirisaki: Oh, and you better not fuck up the Dud-Frank financial regulation repeal like you did with the healthcare repeal. Otherwise the firm will see whether “The Electric” Pence might do a better job. 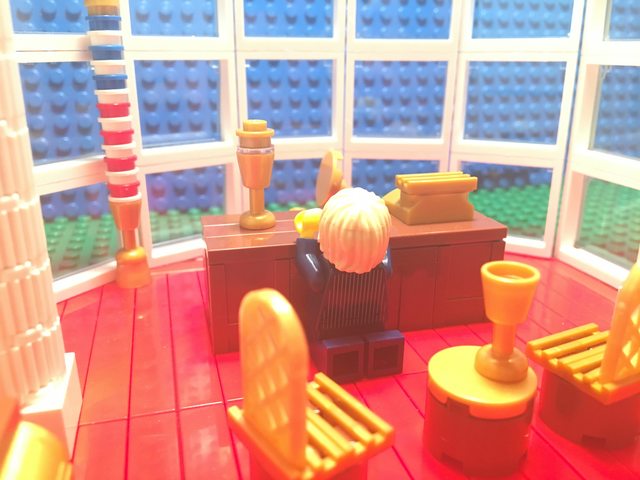 This is amazing.
Top

i can feel something pretty awesome building up here...
Top

This is great and absolutely true
Top

General Franklin Isaacs- "Thank you all for coming here to discuss the matter at hand, on behalf of the United Systems Alliance I welcome you."

"To start things off, Lady Penelope Fang has a piece of information to share with us."

Lady Fang- "Thank you so much, my husband Clarence sends his regards for his absence, he has some important business to attend to with the Declax Commonwealth and sent me here in his stead. I assure you, House Fang holds this matter with the upmost importance! before I get started, could you pour me a drink commander? I'm going to need one!"
Commander Benson -"It would be a pleasure, my lady."

Lady Fang- "As we all know, the Imperial Magikstrate has been becoming more and more of a menace. At first, we of the Anti Uasciri Coalition could were a match for them in the sector, but their power grows stronger and stronger each day. Our fear is that they gain the power to crush us and start eroding other great star nations."

"Our fear might be coming to fruition." The lady slides an envelope across the sleek obsidian conference table. "I received intel that not only confirms their growth in and monopoly of the magic industry, but of something much worse. As Trattoria ambassadors have already confirmed, the IM is forging an alliance with both M-throne and Poland, but new intel has shown there are plans to construct M-throne warp gates in IM controlled territory. This puts a near immeasurable power not only at the doorstep of House Fang, but USA and Trattoria as well."

Joseph Harrington, CEO of Prisma Industries- "Hmmm, I am not sure about an M-throne threat to Sheodar and Prisma, at least on a military scale... However, a strong IM magic industry threatens our robotics manufacturing. If they continue to grow, they will outpace us entirely."

Broosor Smith, Hells Fargo Executive - "This is Horse shit!" He springs up knocking over his glass, "An M-Throne dominated galaxy will brings peace... peaces is not good for the business of war or the business of souls!"

Trattorian Ambassador to the Magenta sector, Dr. Coda Hiroharu, slams the letter onto the table, garnering everyone's attention except Lady fang who continues to sip on her RedRum.
Dr. Coda Hiroharu- "No no no..." He trails off mumbling to himself. "Trattoria will not be pleased," he continues to murmur.

Coda looks up to everyone staring at him inquisitively, waiting for his response or at least some clarification of his mutterings.
Dr. Coda Hiroharu- "I agree. A strong IM is not good for business or the current super powers... They have showed time and time again their unwillingness to get with the galaktik program. However, any proposal for Trattoria action will have to go through our legislature. I will..."

Before Coda can finish his sentence, the door to the conference room begins to open.

A figure clad in a red pant suit and frizzy yet flowing hair approaches a suited USA agent at the security gate.

USA Security Agent- "Excuse me ma'am, you need a green security level to access this point. May I please see your ID."
Woman in Red- "My, my, this place has some tight security."

The woman produces her ID
USA Security Agent - "Oh, I am so sorry I didn't recognize you Mrs. Konman. We were not expecting you!"

"Past the guards and through the glass doors you will find the conference room."
Kellyanne Konman - "Thank you."

"Hello Ladies and Gentlemen, I would say that I am sorry to come unannounced, but I am not."

General Franklin Isaacs- "Mrs. Konman, what a pleasant surprise and perfect timing. We were talking about the Imperial Magikstrate situation and our potential course of action, maybe you could give us your input!"

Kellyanne Konman - "You can cut the shit Isaacs, we both know you are the least bit happy to see me. However, I'll take you up on your offer because that is exactly what I am here to do. The President is tired of beating around the bush, are your forces ready for combat?"

General Franklin Isaacs- "Well, we are already engaging the IM on multiple fronts and holding certain strategic positions in the sector."

Commander Larson- "We are currently secured on the front we share with the Technocratic Union."

Commander Benson- "We have also secured new black-site locations since the breach of the last one."
Lady Fang- "Our forces are stationed to defend and my husband is making preparations for Declax involvement as well."

People murmer amongst themselves, while a 45th union representative gets up in arms.
45th Union Representative - "This is ludicrous! Do not get me wrong, we are not fan of the Imperials either, but to have the USA growing in arms and pushing in closer and closer to the 45th Union does not inspire confidence!"

AN Representative - "I think rushing into war is unwise without consulting the security council. This seems like a knee-jerk reaction made out of fear and not thought."

Kellyanne Konman - "I believe you guys do not understand me once again.."

"I was giving an order."

A shot makes its way out of Kellyanne's golden pistol and into the head of the peach, decorating the conference room with his blood. Everyone jumps at the shot.

Kellyanne makes her way over to the AN representative and speaks directly yo him
Kellyanne Konman- "Now, do you think you can scamper back to the security council and convey the message?"
AN Representative- "Y.. y..yes.. M..ma...ma'am." He says quivering in fear.

Kellyanne Konman- "The rest of you lot, I advise you prepare for war."
Everyone looks around and nods in some sort of agreement.

"Glad we could all come to an agreement after a productive meeting."

The gas turned them into peaches? The horror!!!

Now I feel obligated to participate.

I said I was going to anyway, Built up Magiksrate, M-Throne and USA armies but just got busy.