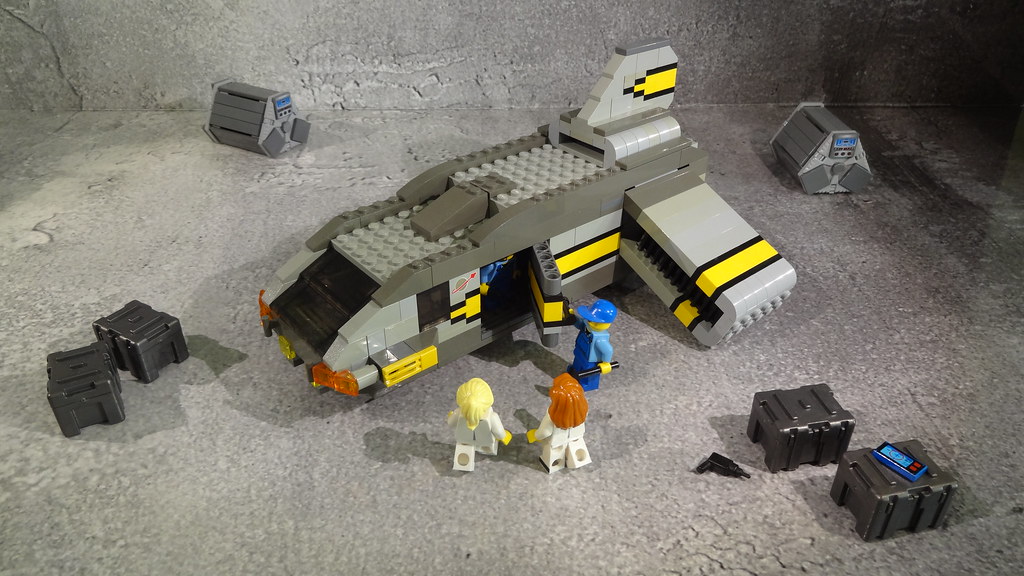 Somwhere deep in the Hangars of a StarCorps research facility, a team of engineers and scientists examine a derelict vessel that was recently found adrift in the outer territories. 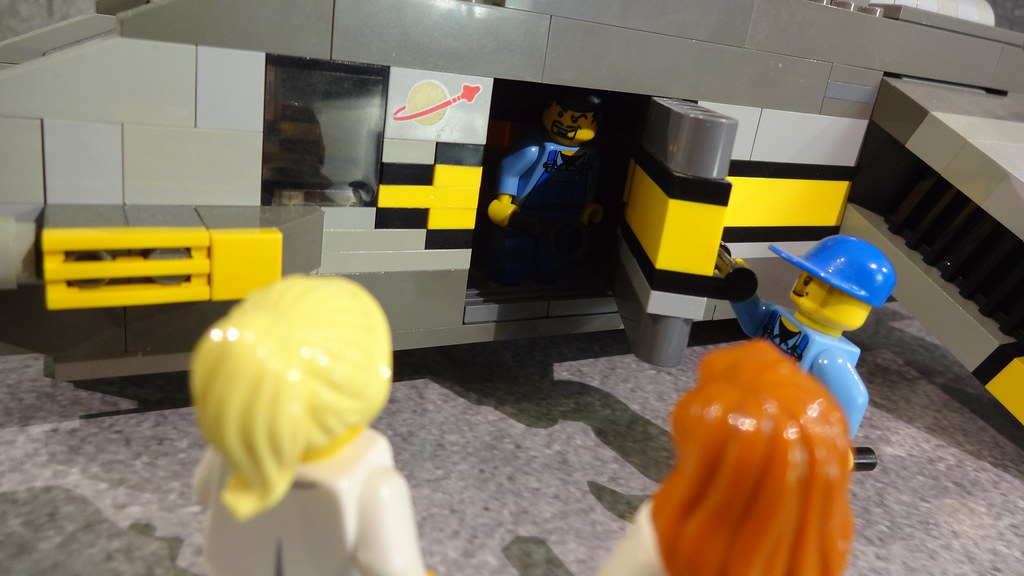 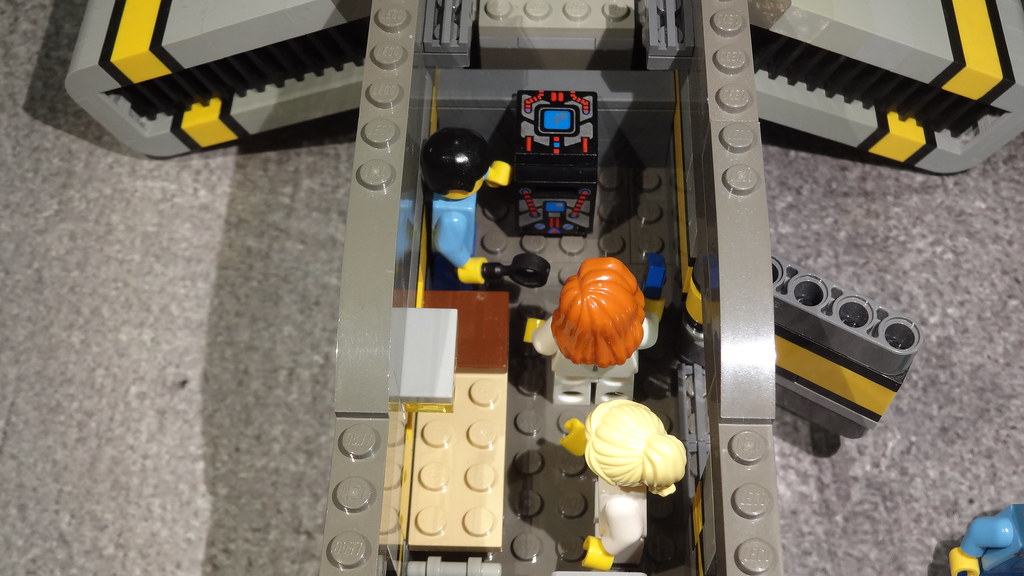 "Well, I guess you already noticed that an alternate version of the StarCorps logo is attached to the hull. Yet this is none of our designs. No technology I would recognize from our archives. The ship itself is rather unspectacular, except this device, that doesn`t fit the overall picture. It was definitely installed retroactively."
"Yet it looks strangely similar to the old devices we used many decades ago. Can you open it?"
"Yes, Ma`am, but do you think it`s a good idea to..."
"Do it." 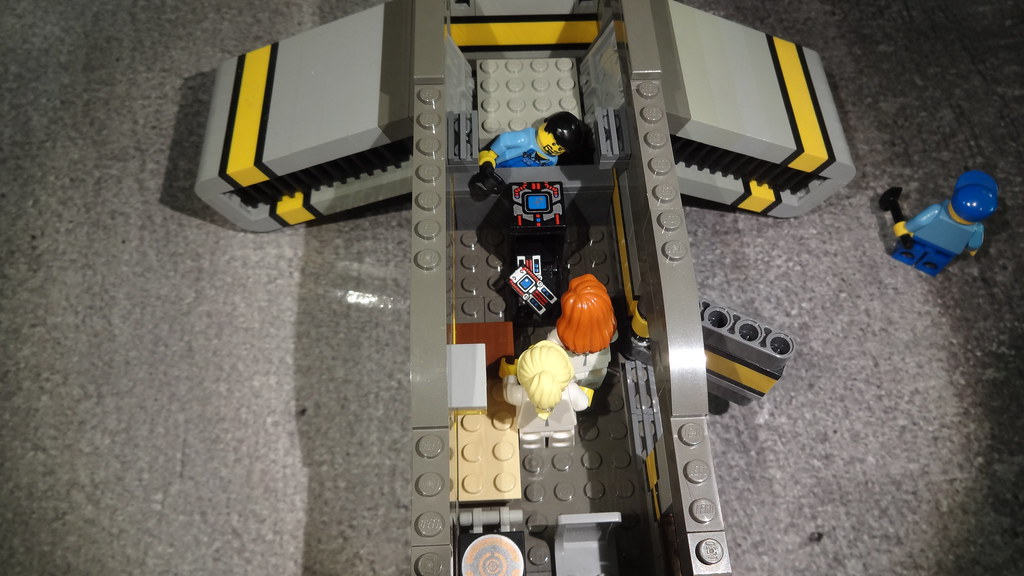 "Okay, just gimme a sec"
He climbs over a small support on which the device seems to be mounted and reaches for a release mechanism he found before. The device shortly clicks and the front hatch opens.
"There you go."
"Just what I thought. Old data storage units! Very chunky but extremely durable. Whoever was on this ship wanted to preserve the information on it for posterity." 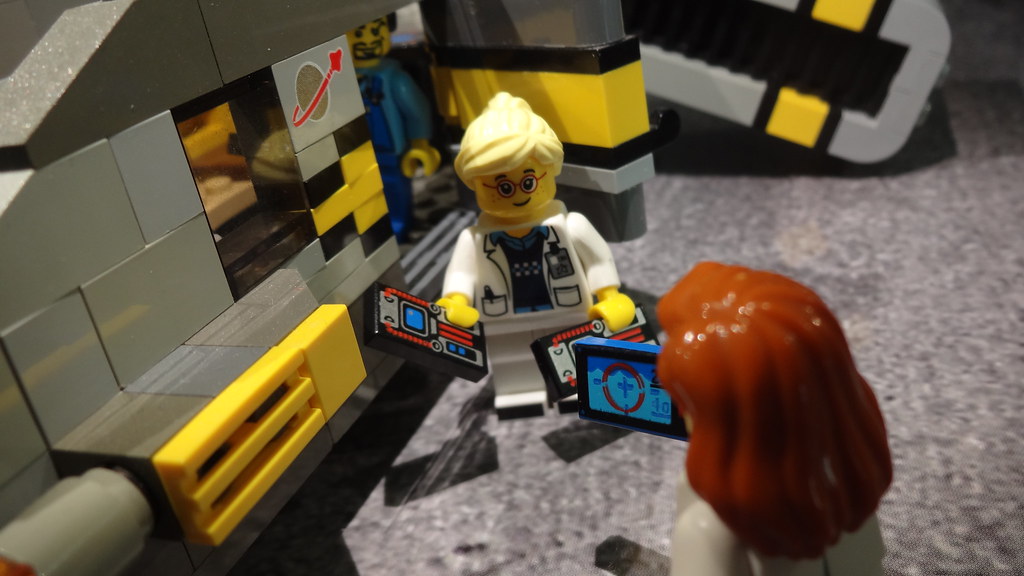 Researcher Peggy Shness: "Yay, age-old data files. Like an old copy of tetris or something? Meh."
"Oh shut you just up, Peggy! Much more comprehensive than that! These disks` capacity is enormous, they could contain the knowledge of an entire civilization."
"Um, yeah. if you say so."
"Just let me scan these disks and contact the Officer of the science department. He needs to see this. What a huge and exceptional find!"
"That`s what she said..."
"Shut up, Victor!"

by Bookwyrm
Good stuff, looking forward to seeing more of this

by Space Bunny
Really good! Can’t wait to see what happens next!

by MadMario
Thanks guys! I am currently building sets and props for the next chapter, which is more time-consuming than I thought initially. Hope I can upload the next installments in about a week! 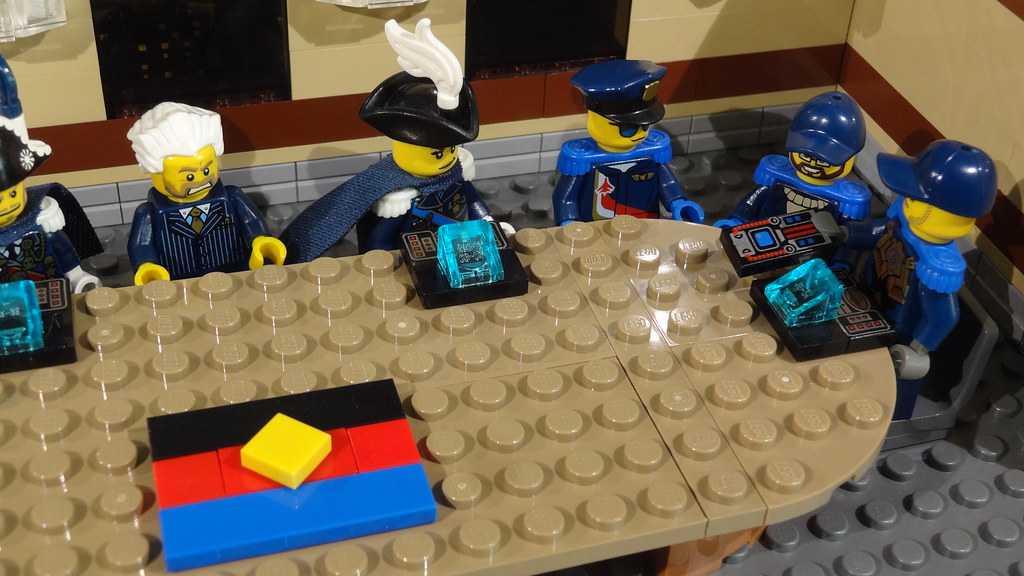 Nye Tyson, Officer of the StarCorp. LLC Science Department: "So our scientists found some data storage units in this shipwreck. They tried to restore the data, but large parts are unreadable or lost, probably due to ionic storms that hit the ship befor we found it."

"Not at all, far from it! The bits of data we could decipher were all the more revealing! In particular, we found several references of the old worlds that are mentioned in our history records, as well as names of companies and corporations similar to these used by us. And one thing is pervasive on all data and documents..." 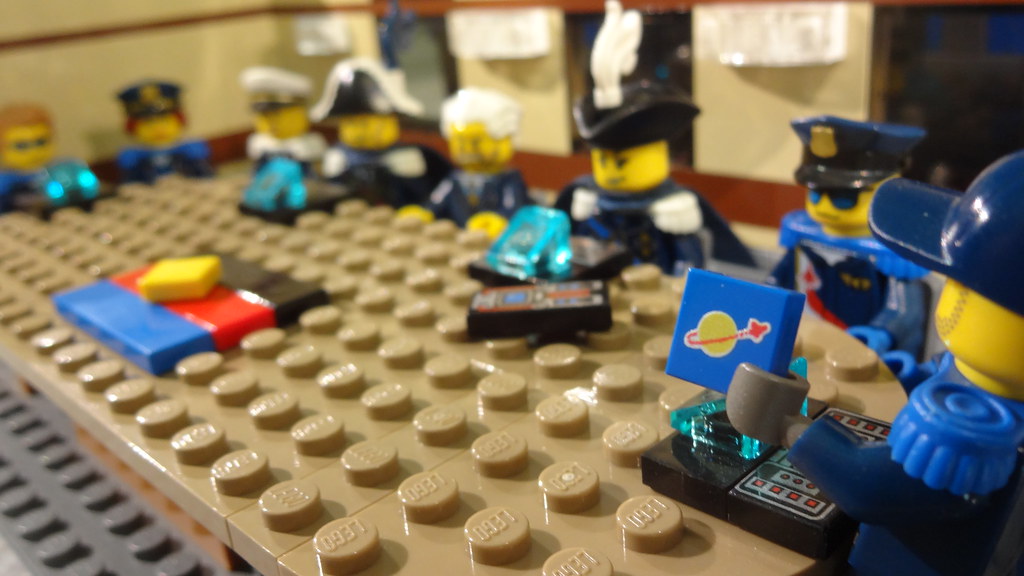 Tyson pulls out a datapad showing a symbol. The other councilors start to mumble in astonishment, only Deele seems not to be impressed.
"The emblem of The First Starfarers, the ancient nation that some believe to be our direct ancestors."

"Uhm, yeah. So we have some old names and planets and symbols. What`s the use for us?"

"Knowledge, Sir. Deeper understanding where we came from. Filling the gaps in our own history records!" 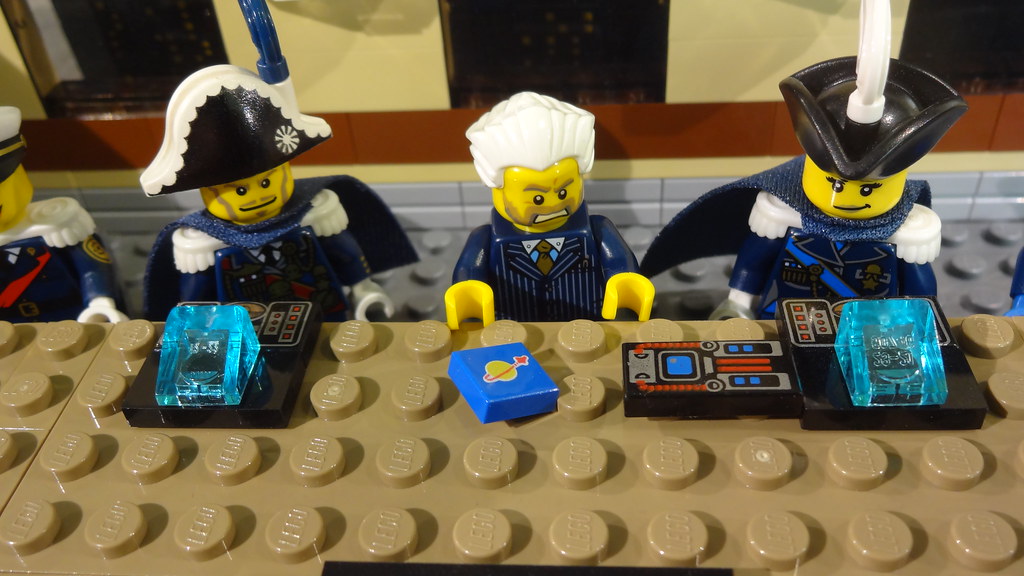 After agitating the pad with the symbol and the data storage in his hands for a while, Deele drops them parenthetically on the conference table.

"I see no profit in there anywhere. And not much information that`s useful for our business goals."

General Welfare:"Sir, with all due respect, this could be one of the most important discoveries of our recent history. The data fragments speak- among other things - of a well hidden base on Ikan, which we occupied some time ago. It would save lots of expenses to investigate a planet we already control. Just send an expedition team there for a few days and see what happens. Just think of what unimagined treasures could be concealed in that hidden base..."

Deele throws an angry look at the pad on the table.

"Do the other officers agree with Welfare`s opinion?"

All council members eagerly nod, each one curious about the things that are to be found.
Deele mumbles something unintelligibly. He is obviously not pleased with the decision at all, but he is overruled.

"You assemble a team to find that base on Ikan. They have one week to get me something useful."

by MadMario
Chapter I - The Discovery On Ikan - Part I 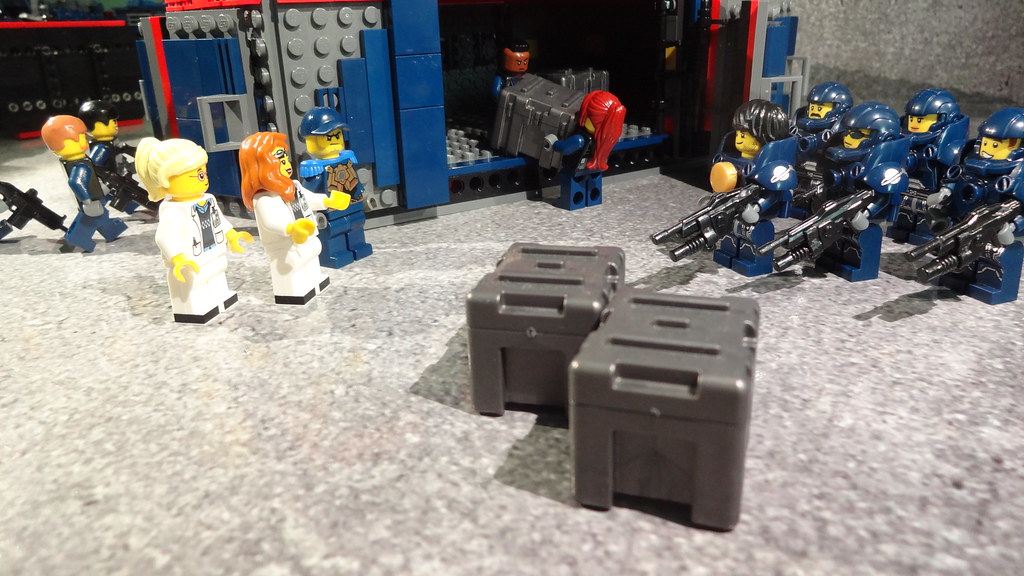 Shortly after the council approved the expedition to Ikan, Nye Tyson, Amanda Taekin and Peggy Shness compiled their equipment and assembled a team. A Heron Dropship is being prepared to take the team there as soon as possible.
A Trooper Squad approaches the scientists, who supervise the loading progress.

Trooper Officer Arnold Willis: "Officer Tyson, Scientist Ladies. My squad will escort you to Ikan, we`ve been relocated there anyway. I personally will stay with your team on Ikan, yet my men can`t. But I see you bring your own soldiers with you."

Amanda Taekin: "Yes, the council was generous in expectation of what might be found there." 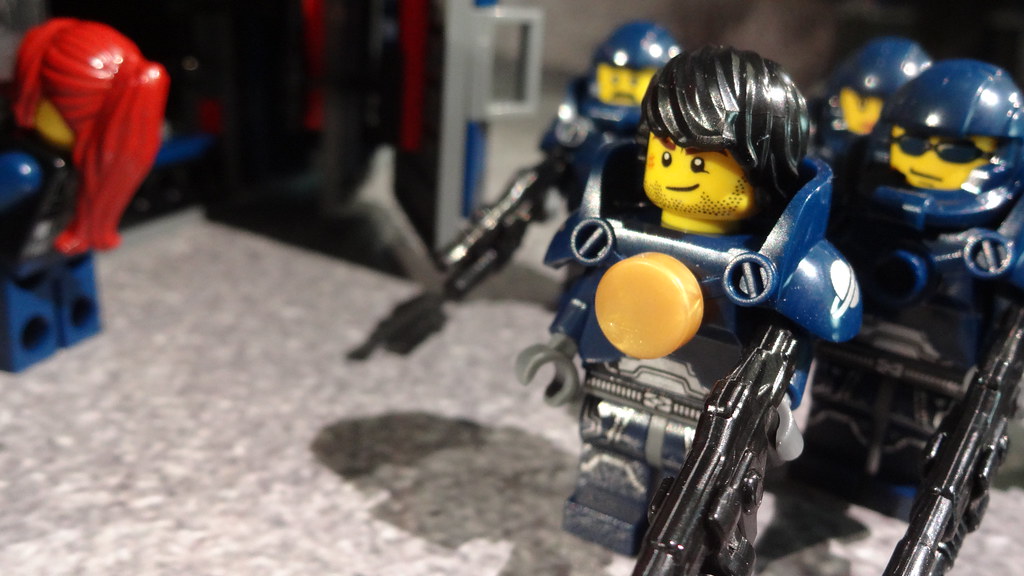 "I bet Deele is fretting and fuming about this decision?" 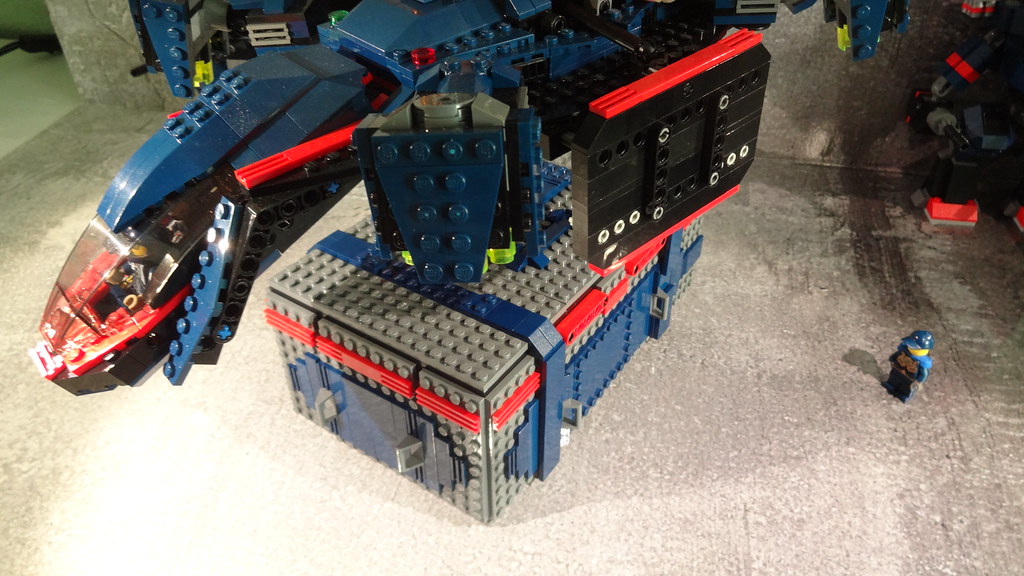 A few moments later, all and everyone is stowed in the container unit, except Tyson who has to return to the council and keep them updated. The Dropship slowly approaches the container`s docking clamps, and with a metallic rumble the container is locked in place. The Heron leaves the starport and approaches the orbiting G.A.T.E. 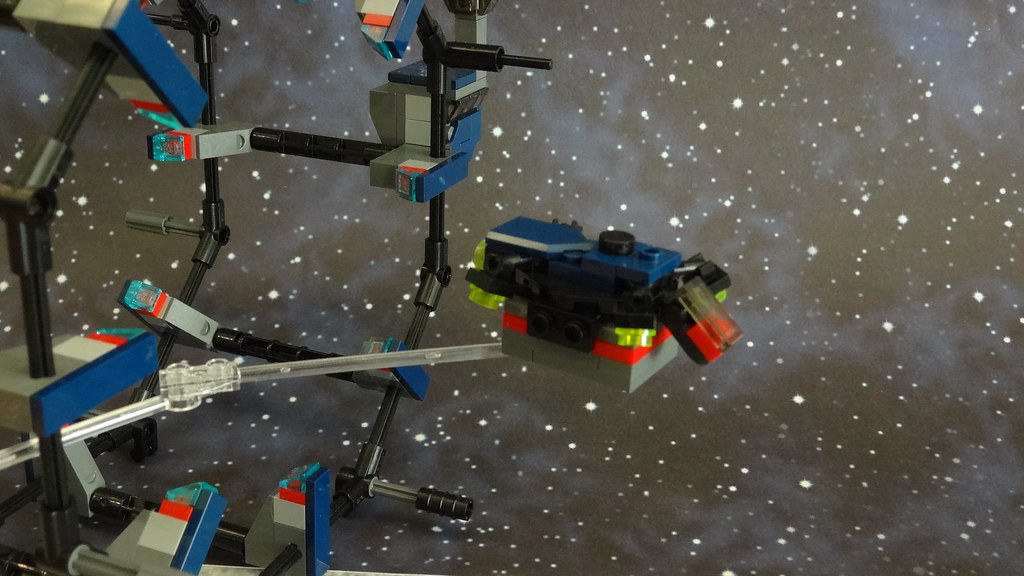 The ship navigates through the G.A.T.E. Network with ease, and soon leaves it near the planet Ikan, where the StarCorps has established a base after driving off the forces of the Red faction called MagnaCorp. 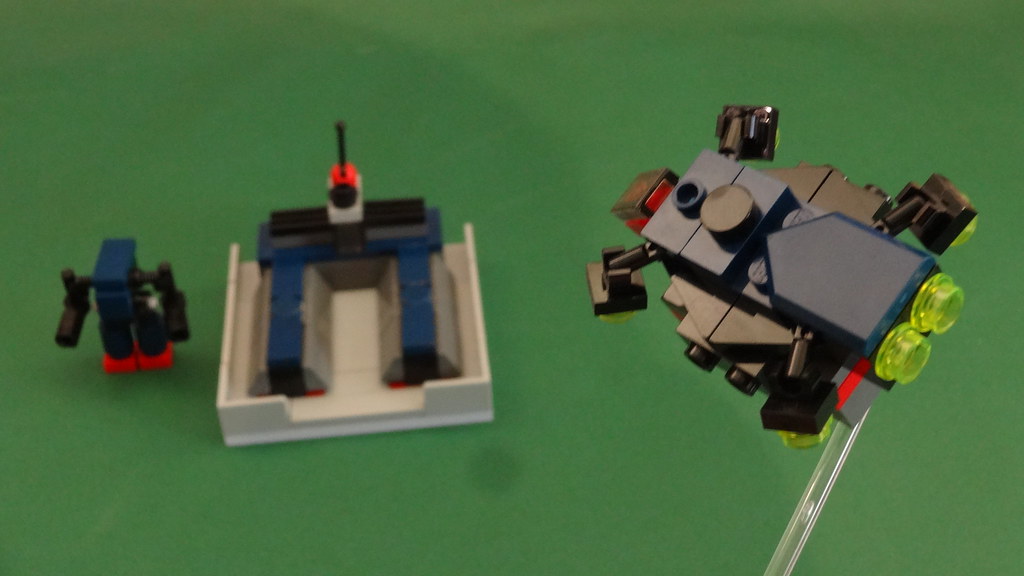 "Aah, good to be back on the frontline. I kinda missed the lurking threats and the military drill."

Peggy Shness: "What? There`s no safer place in this entire galaxy than our core worlds, and you feel better when you leave that safety? What`s wrong with you?"

"Safety is relative, dear. More than this - It`s an illusion. A blanket to soothe the crowd. The presence of danger keeps your mind attentive, it stimulates the inventiveness. Constant safety would prevent us from advancing!" 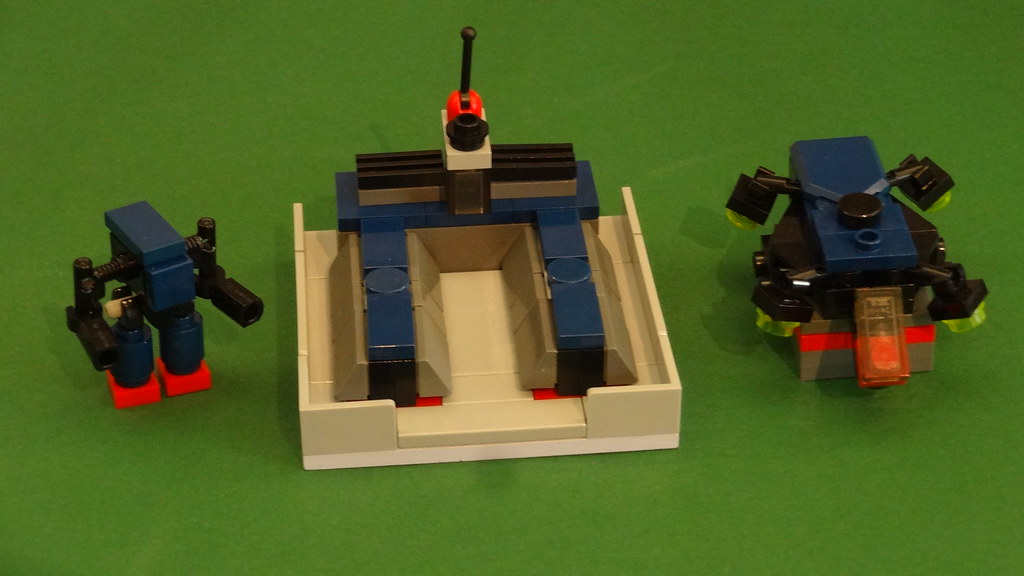 The ship gently touches down right beside the barracks.

"You can discuss that later, lovebirds. We have a mission. And not much time. I`m not willing to dissapoint Tylers hopes, and I definitely don`t want to return to Deele empty-handed." 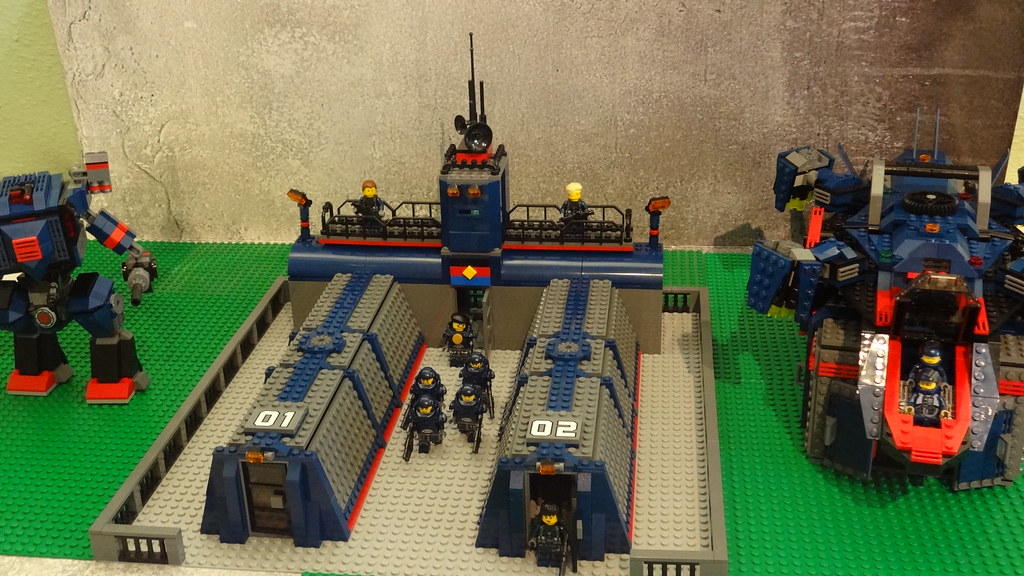 As the sounds of the Heron`s engines slowly fade, the members of the expedition team unstrap their seat belts and prepare to unload the equipment. The base commander and some troopers approach the ship to welcome the team. 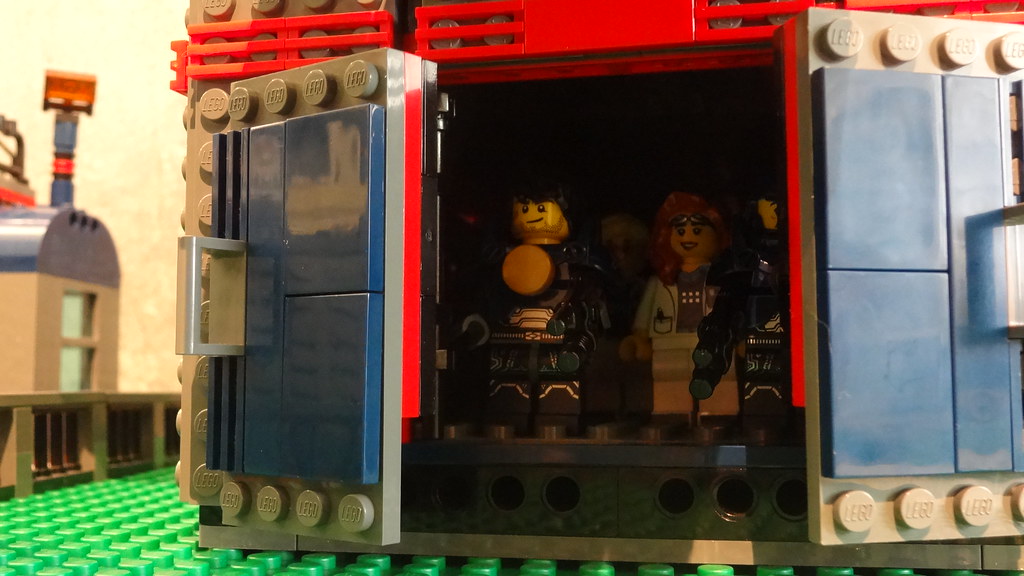 The container unit opens its front door with a whizz, and the team takes a deep breath of the unfamiliar air.

"Mmh, the smell of danger."

"Mmh, the smell of adventure."

by Duerer
Oh man, that's some nice transition form microscle to figscale right there. And that base is hella sexy as well!

by MadMario
Chapter I - The Discovery On Ikan - Part II 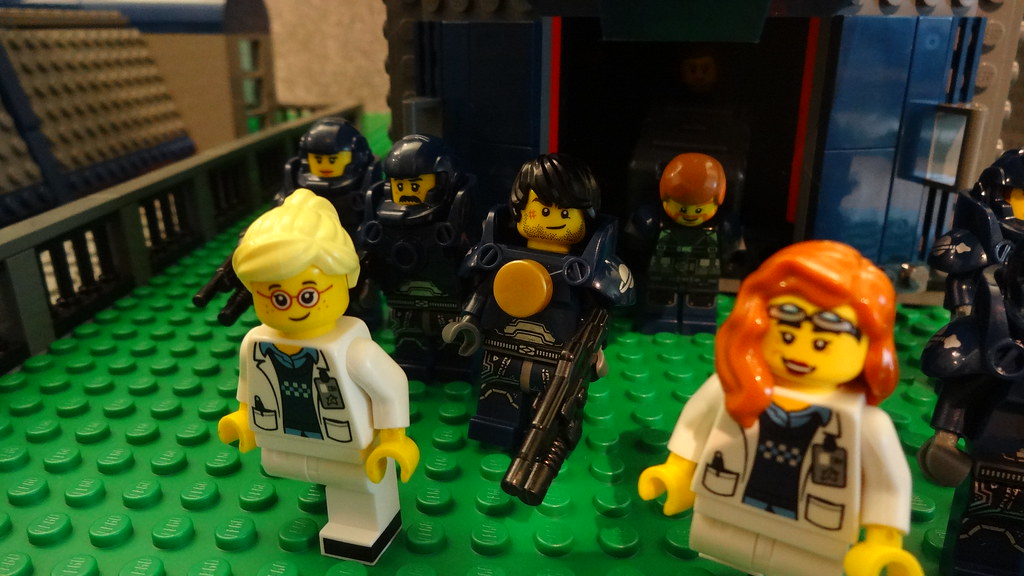 Troop Commander Arnold Willis: "Ladies and Gentlemen, welcome to Ikan! One of the most remote outposts of the StarCorp. LLC territory. Where dangers and adventures are always at hand!" 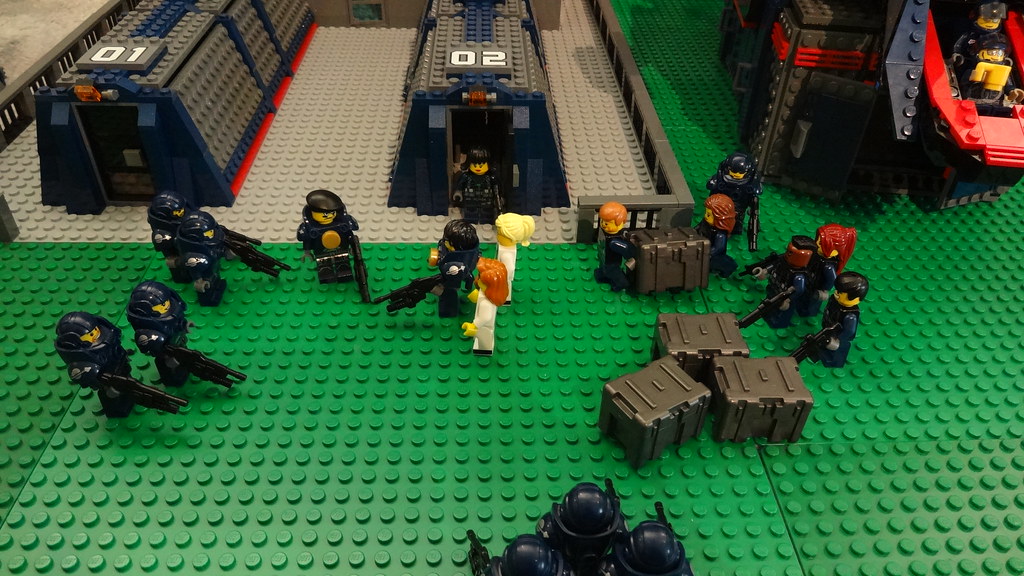 "Reporting in as ordered, Sir. We have supplies for the base, and my men will stay here right away. I myself have orders to assist the expedition team for the next days, and then escort them back here."

Captain Crimson, leading officer of Ikan outpost: "At ease, Commander. HQ already informed me about your mission. Welcome back. Anything else you need for this expedition thing?" 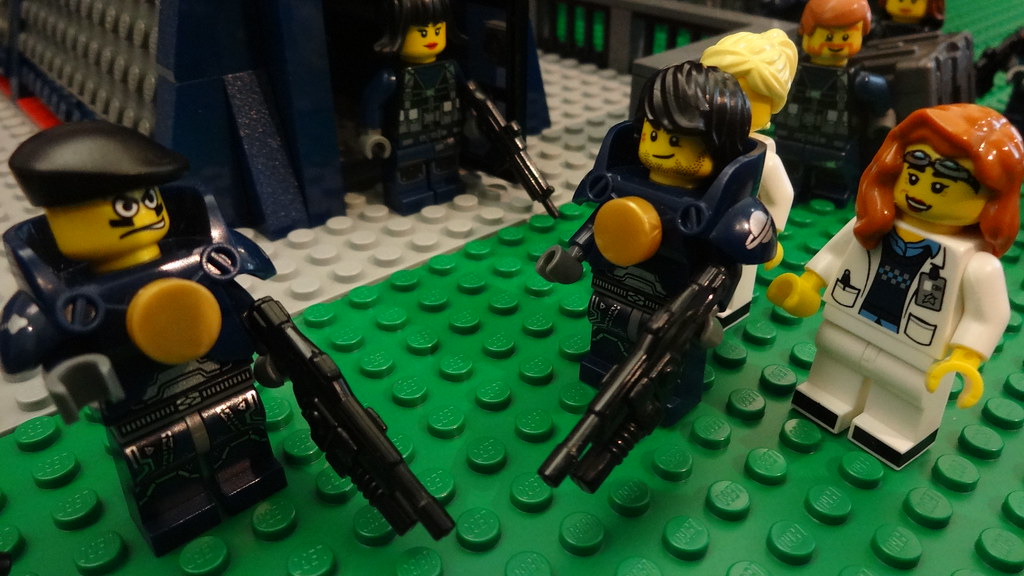 "Thank you, Sir, but we have brought everything and everyone we need."

Amanda Taekin: "Thanks for your support, Captain. But we have no time to loose. Deele wants results."

"I`d have chosen some different phrasing for that, but yes." 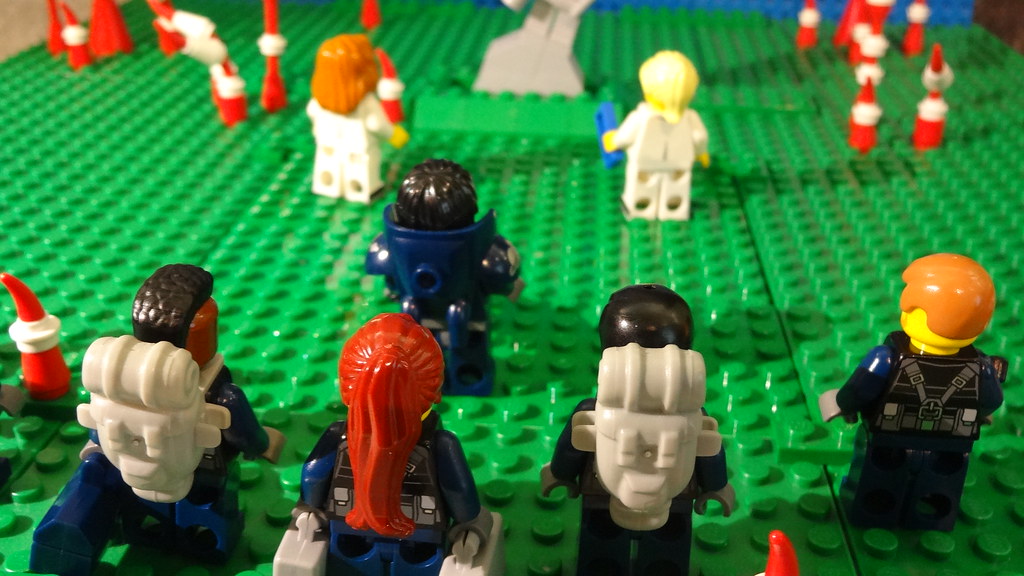 Shortly after, the team starts its journey to the place where the ancient coordinates portended. Approximately two hours later they reach a clearing where an old, mossy statue is slowly devoured by nature.

"There we are. That`s the former location of a big outpost of the ancient starfarers!"

"Doesn`t look very impressive, how many people may have lived in that statue?" 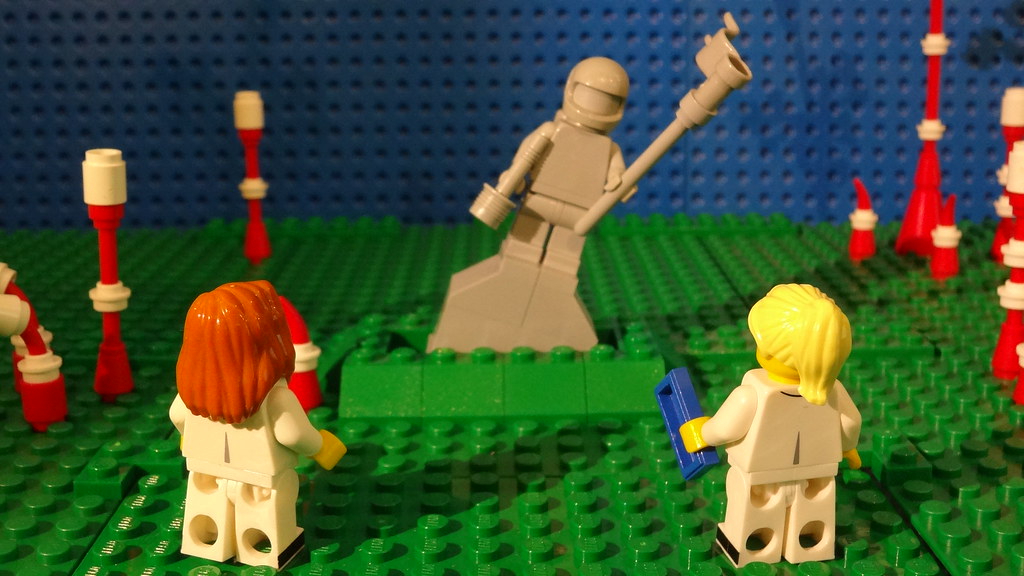 Amanda and Peggy approach the statue.

"Can you validate its age?"

"That`s pretty vague for such an accurate device. Chrono-Particles?"

"Well, I guess it`s time for some classic archaeology stuff." 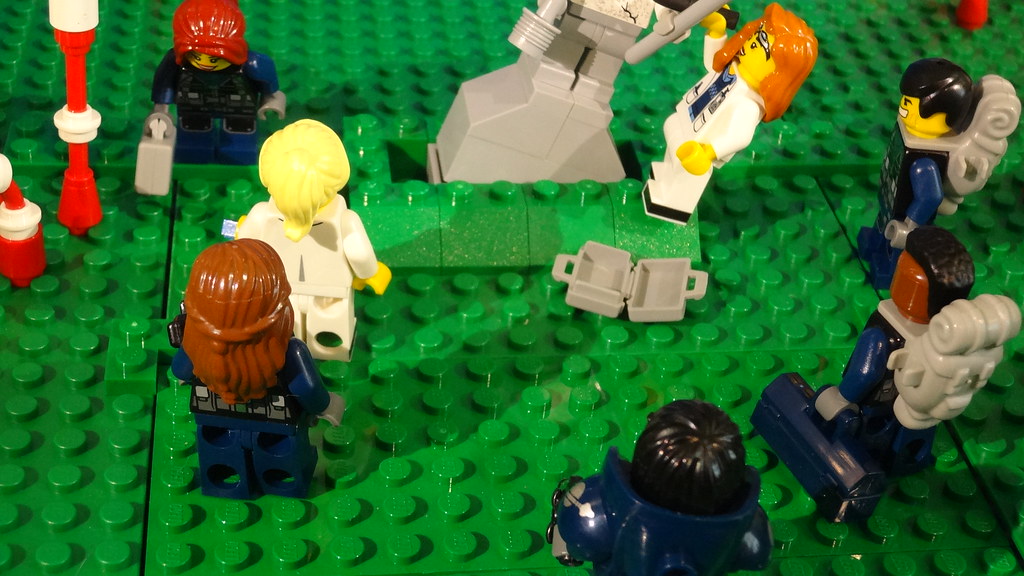 The team gathers around the statue as Amanda Taekin begins to carefully treat the statue with a brush. As the minutes go by and the team unpacks more and more equipment, Amanda makes a howling discovery...

by sahasrahla
these builds are all so good. i want to make a base like that now

by MadMario
Chapter One - The Discovery on Ikan - Part III 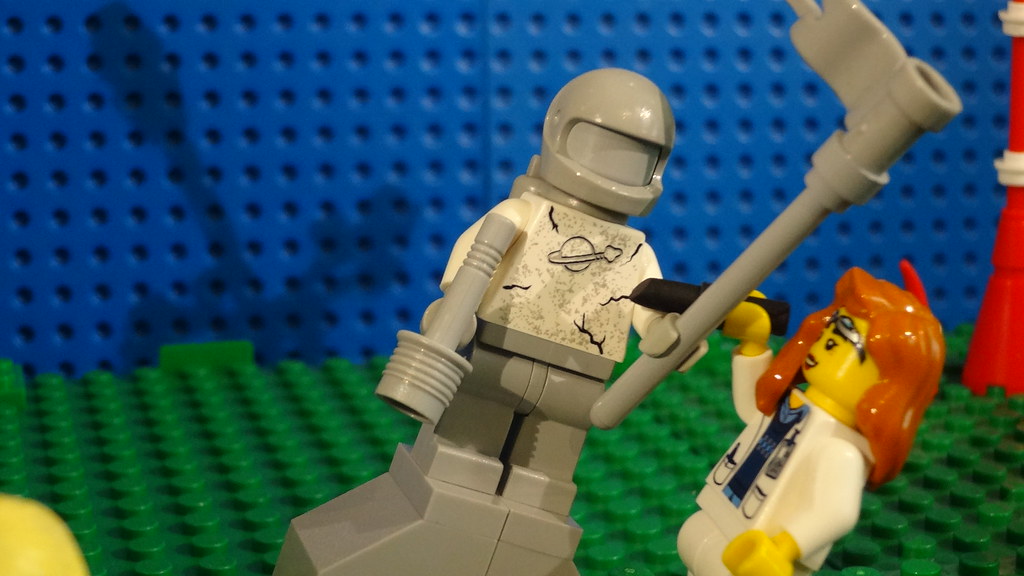 Amanda Taekin: "Unbelievable. The Starfarers symbol! They were really here! My theories of our cultures` origin may be correct!"

Peggy Shness: "Yay, that`s a run-of-the-mill logo of a rocket surrounding a ball and you think that changes our whole origin story? Ease off..."

"I`ll ignore this once, but another impertinence like that from your mouth and I`ll rip your head off and clean that statue with your scalp, you ungrateful brat!" 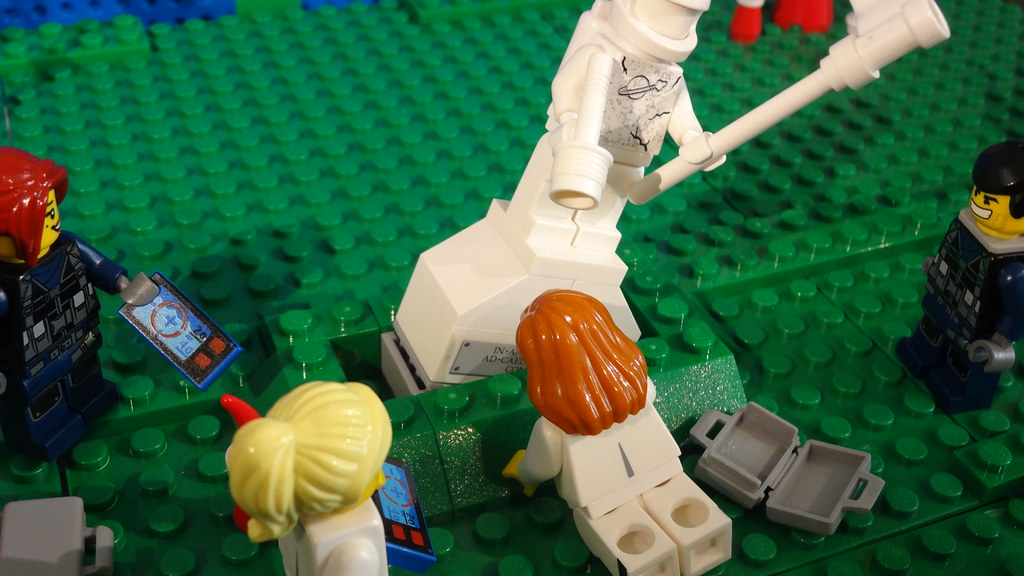 Peggy suddenly becomes very tight-lipped. Silently they work on the statue, freeing it from all the dust. No one speaks for
half an hour. When Amanda reveals some scriptures in the Statue`s pedestal, the group becomes flustered.

"I can`t decipher it completely, half of the socle has sunk into the ground..." 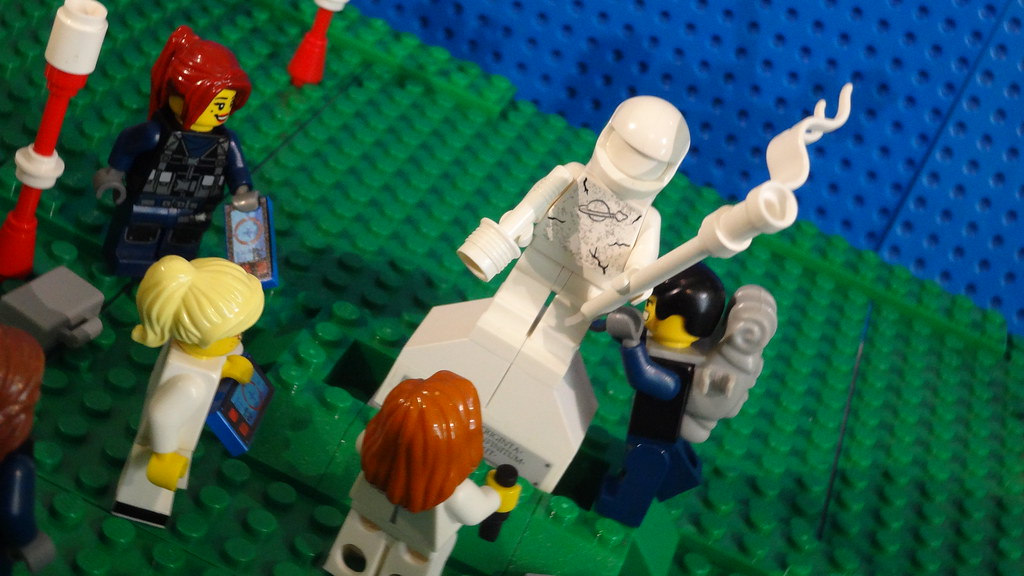 He walks up to the statue and starts pushing the sunken side up. After nothing happens initially, suddenly the whole statue moves jerky, making the soldier lose his balance... 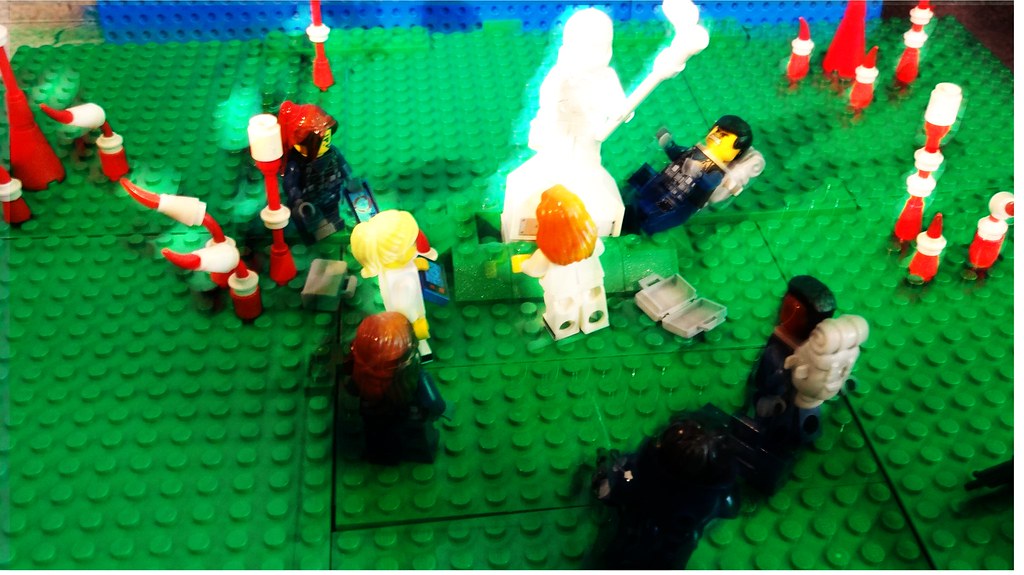 CRAK! ...rrrrRRRRUUUMMMBLEEEee...!
The whole ground seems to move, and now also the rest of the team can hardly stay upright...

"What did you do? What`s going on here?" 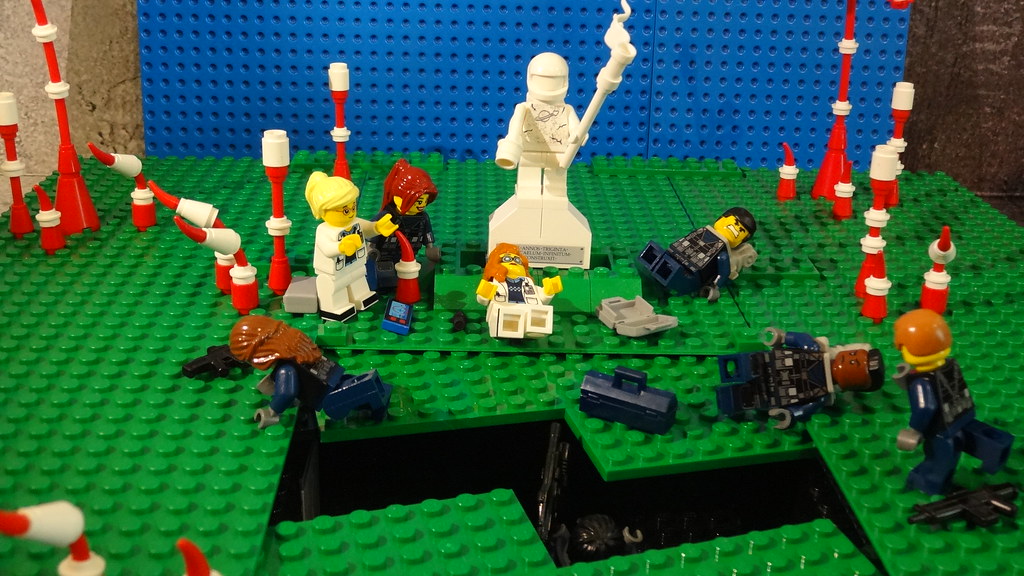 Suddenly, a large hatch starts to open right in front of the statue! Most team members are able to bail out of the way, those who stood furhter away help those in the danger zone to get away. Only Officer Arnold Willis, who happened to stand right in the middle of the hidden hatch, is consumed by the ground... 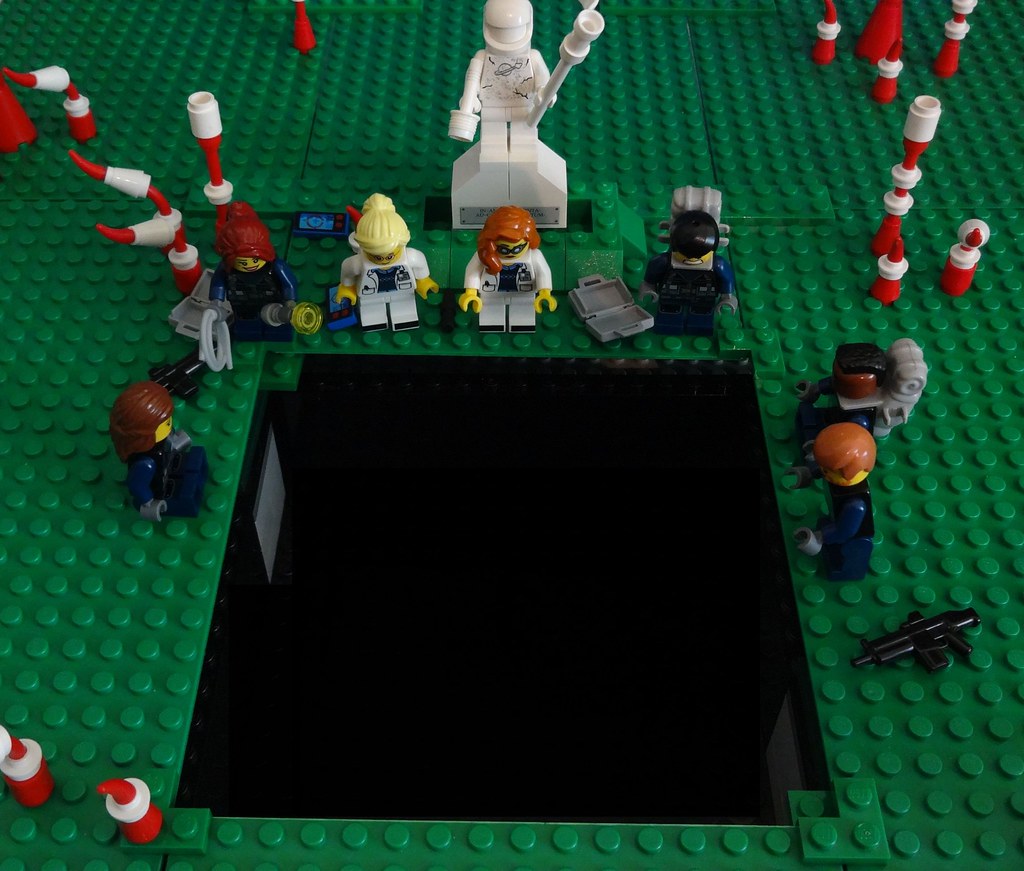 The expedition team stands shocked at the yawning abyss, and the only thing they hear now is the fading scream of a man, followed by the clunk of a power armor hitting a metallic ground.

Then there is silence.