The intelligence officer was able to take down the foreigners shield, allowing the Avalonians a chance to avenge the deaths of their people.

The men took up their positions and began to harass the enemy.

However, a repeater cannon on the wall dampened the Avalonian morale.

"Call in reinforcements! We're getting butchered out here!"

"Hand me your gun soldier!"

"Let's see how they like it when everyone decides to be a sniper..."

"Alright! Give them everything you got!"

"While the Olwen is pounding the wall, I want you and your men to climb the rocks and even the odds for us."

The Olwen tank's main turret targeted the wall and began its barrage.

"Alright men! Into the breach!"

Meanwhile, Beta Group swam through the wreckage and began to climb the rocks.

The attack was halted as more foreigners took up positions on the ruined wall.

But fell prey to the mini-gunners.

The Olwen used its front cannons to return fire.

Foreigners continued to hold the wall...

... Until Beta Group got the jump on them and taught them a lesson on respect.

"We cleared them out Captain. We suggest knocking down the rest of this wall before charging in again."

"Roger that! Everyone get behind cover!"

The Olwen destroyed the wall, exposing the rest of the hive to Avalonian guns.

Suddenly, from high in the sky, Mordred landed on the Olwen and began to rip it apart!

The pilot begged for mercy...

... But Mordred felt it was more satisfying to smash his head in.

Semaj and the others fired at Mordred in retaliation.

But the monstrous foe flew back into the sky.

Meanwhile, Avalonian soldiers began to crawl over the wrecked wall. They came into contact with Slashes and responded with firepower.

Unfortunately, one of the Slashers managed to jump far enough forward to embed his sickle into a soldier's head.

The soldier was quickly avenged.

The Avalonians made it through the rubble and began to engage the foreigners inside the compound.

But the foreigners in the hard suits were too powerful for mere infantrymen to handle.

While the hard suit foreigners continued to mutilate the dead with their terrible firepower, Semaj hid out of sight, trying his hardest to come up with a plan of action.

"Commander, do you have any fudge?"

"No sir. I ate my last piece just before this battle."

"No matter. Have the Aldwyr Trooper fire a rocket at those demons!"

... But the hard suits were heavily armored.

Soldiers that had advanced to fill the gap were pinned down with no where to go.

So, Semaj decided to set an example for his troops.

He did a hand spring towards one of the hard suits....

The other hard suit was shot down before it could return fire.

The Avalonians swarmed the foreign stronghold.

Semaj and the commander tried to disengage the missiles from launching. Before the intelligence officer had died, he warned Semaj of two missiles the foreigners were about to fire into the sky.

Suddenly Mordred reappeared, ready to finish the Avalonians once and for all. A Line Infantryman quickly fired at the fiend.

"Do you really believe that your puny weapons can stop me?" said Mordred as he caught the laser bolt.

"Take your silly laser back!"

Semaj and the Fudge-Eating Commander tried to retaliate...

... But they were knocked down again.

A special ops soldier rushed forward and began to shoot.

Mordred was a powerful foe and caused a beam of pure OT energy to erupt from his hand and blast the special ops soldier to pieces.

It was a truly horrific way to die, but the commander was not going to let the death of one of his men dampen his resolve.

With heroic zeal, he launched himself into the air and plunged his blade into Mordred's eye socket.

But rather than anguish in misery, Mordred thought it better to cut the commander in half with his massive weapon. Semaj watched in horror as he witnessed the death of his close friend.

With his blood boiling, Semaj rushed forward and cut the end of Mordred's weapon off with his OT Beamsaber.

Cutting the weapon was not enough. After he cut off the monster's hand and wing, he plunged his weapon deep into Mordred's chest and waited for the despicable being to breath its last breath. But Mordred never breathed a final breath.

As it turned out, Mordred was not a living being at all. He was an android!

"If he was an android, then who built him?"

"Captain, there is a room just behind me that we haven't searched yet. I suggest we look for answers there.

Suddenly, from out of no where, a Slasher rushed toward the soldier and hacked him to pieces.

He was quickly eliminated and the remaining soldiers rushed to clear the next room.

The Avalonians stormed the room.

"Your highness!? How did you end up here?" 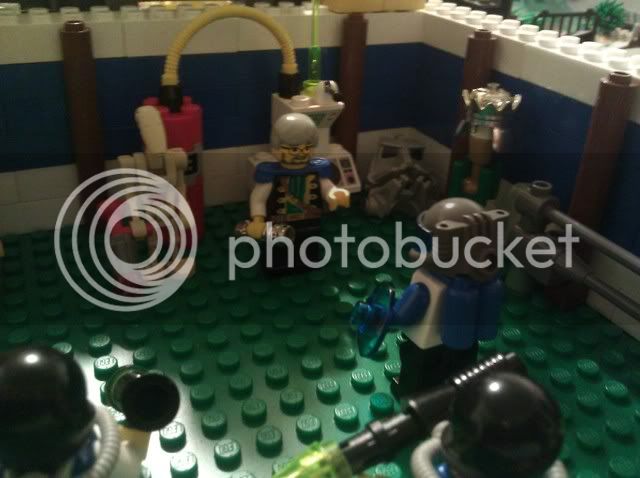 "How did I know that you would be the one to find me here?"

"Your excellency, we must get you out of here. It's not safe!"

"No my lord. The foreigners have missiles that may go off at any moment!"

"Oh how I wish everyone would stop saying foreigners..."

"They are the Menggu! How hard is it to remember their name?"

"That they are called the Menggu? Because I hired them! I hired them to exterminate this tiny, backwards, disgusting planet!" 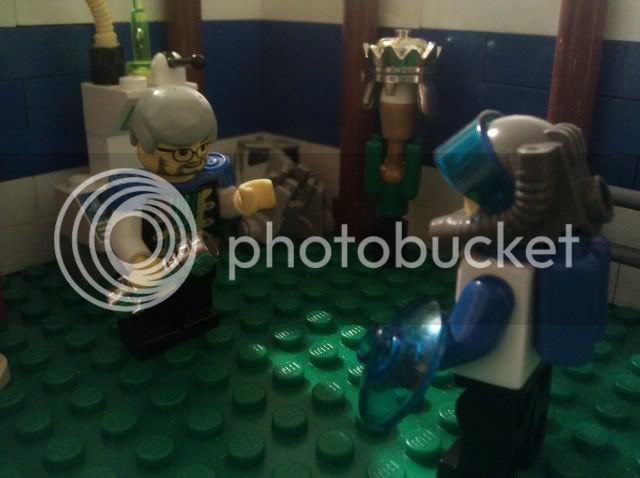 "Oh Semaj, you're an idealist, not an opportunist! How could you possibly understand? I learned long ago that our system would be compromised sooner or later. What better way to protect ourselves from slavery than to create weapons from the strongest material in existence? You see, it was I that hired the Menggu to come to our world and begin the great cleansing. I knew that enough violence on our pitiful planet would cause demons to come forth and change the world. Another deposit of OT would form and I would be the man that the rest of the galaxy would turn to for weapons. Do you think those barbaric Iceworlders would have been smart enough to offer fair prices like me? Not a chance! The fools hardly know how to cultivate a good business! Do you have any idea how much money I could have made?"

"Weak descendants of a once proud name! But the old days are over! Yellow Castle is lost to history! We would never have had such honor unless we had OT!"

"Glad you asked... A two stage weapon I designed. One rocket contains the DNA of the Menggu's most savage soldiers in the form of endospores. When the first rocket explodes, it will fill our atmosphere with them and then the second rocket will emit a radioactive pulse that will further mutate the already twisted DNA. The survivors of the great cleansing would be infected with Menggu DNA and turn into them! My own army would have been created without any prior training!..."

"Your highness, you are under arrest for murder, misuse of the imperial army, high treason and for being the scummiest being in existence."

"Ever the knight in shining armor. Let's see just how well you can use that pretty saber of yours."

Meanwhile in a distant part of the galaxy.... 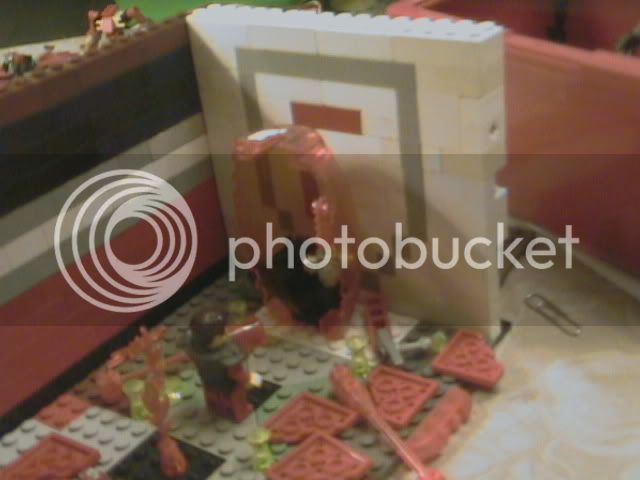 A being of immense power had splintered into fragments. The pieces of the former being fell into a portal and dispersed all across the galaxy.

A part of the portal opened right under the corrupt king's feet.

Silence filled the air. A strange being stood before Semaj Nagirrac and the confused soldiers.

"What are you doing? Don't touch that crown! It's a sacred symbol of our people! Who do you think you are? What's your name?"

(That was a great battle!

...And a nice way to introduce Warhead

That was an incredible story from start to finish. Semaj Nagirrac, the Avalonians and the Menggu will always have a place in the Brikwars universe now. When I get home I'll see if I have any minifigs that match their uniforms...

Also, Warhead, way to drop in with the final line. That was awesome.
[21:30:33] Scritch: you can put it in theblackdog

THIS WAS THE MOST EPIC THREAD EVER PRODUCED BY ANYONE.
This sig is too fucking large: show anyway

I rally enjoyed that.
Great job!

Also, props to Warhead for the ending line.

Han Solo wrote: Hokey religions and ancient weapons are no match for a good blaster at your side kid.

That was really cool nice job
Only 2 things are infinite the universe and human stupidity, and I'm not so sure about the former- Albert Einstien.
Top

Wow that was great! 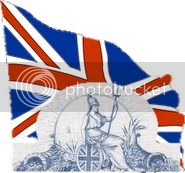