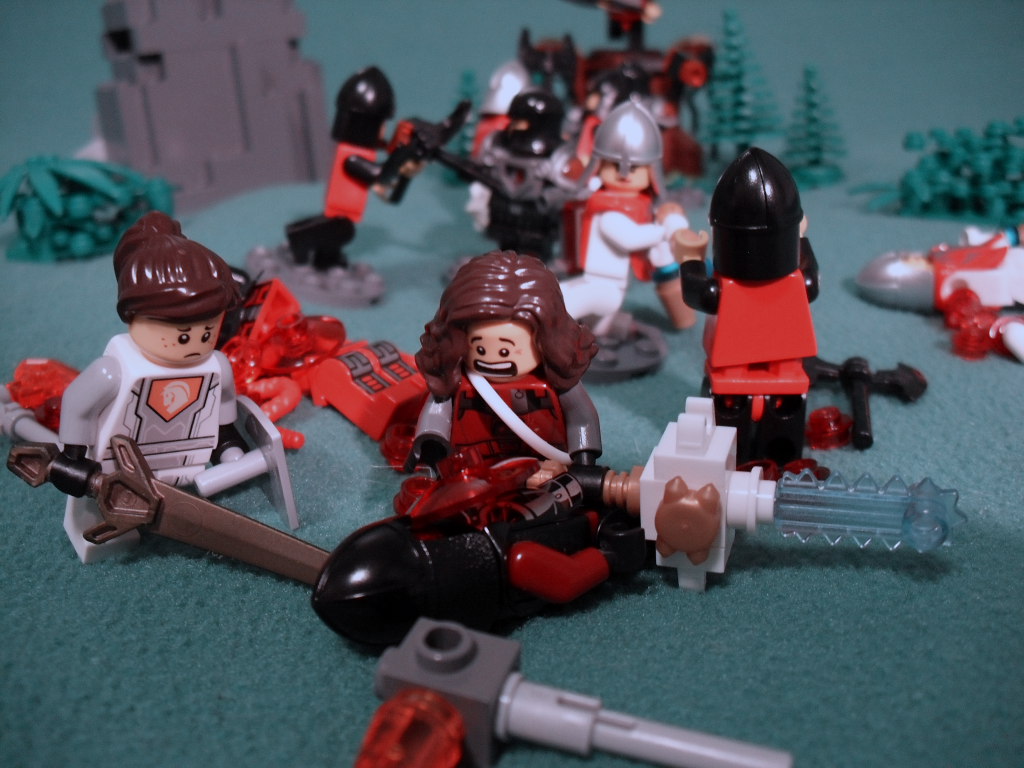 It all happened a few months ago, on one of the Lietuvan border worlds, when we heard reports of red-robed cultists, performing dark rituals. Wherever demonic forces are at play, we are on the spot to make sure, that it won't spread out to threaten the lives of the innocent. We were wandering in the forest at midnight, where said ritual was supposed to take place. Brother Jerzy and I were accompanied by a handful of fellow brethren and sisters from the order, among them were Celestyn and Dariusz from the Forge Guard, Jerzy's young librarian apprentice Jadwiga of Tarnów. From the 7th company, Brother Juliusz, Brother Cezary and Sister Estera joined us to further investigate this site.
"This is odd...", Jerzy uttered: "If there was a dark ritual going on in this area, I would have felt some sort of dark energy pulsating, kilometres away. Something feels odd about all of this and it's nothing supernatural this time around..." Though he might be rather absent-minded for the most time, Jerzy's knowledge usually does shine when it really matters. While most of his predecessors shied away from any deeper research of dark cults out of the fear of getting attracted to their twisted ideals, he managed to put all information about these into good use, saving countless lives in the process. Suddenly, a quick swish through a nearby bush caught the attention of Brother Juliusz: "Looks like we're not alone here, after all! Surely feels like an ambu-"

But before he could bring his sentence to an end, a figure clad in red and black, primitive armour lunged for Juliusz and chopped off his right arm with an axe. It baffled me how this man could have pierced through our thick armour with this dull war axe, only powered by his burning rage alone! Before any of us could have approached our brother to aid him, as he was screaming and writhing in pain, four to five more of these axemen jumped out of the bushes and promptly engaged us in close quarter. Devious scumdogs! Instead of engaging one of our able-bodied brethren, one of these rats went low enough to go for the dismembered Juliusz.

Before he could fully strike out for the kill, I swung my forge hammer at the axeman with full force. With one burning flash, his head has been severed from his neck with his body slowly collapsing and lifelessly falling to the ground. "Watch out, Forgefather!!", Sister Estera tried to warn me about the incoming attack but it was already to late for me. As soon as I made a half turn to see what was going on, I only saw a huge twin-bladed axe with a bright fiery orange glow incoming.

I immediately felt my eye being burnt off and my entire ribcage shattered in no time. Never was a wound that excruciatingly painful as that one. Looks like he was the leader of this pack, who sent his men to lock us into that forest before charging me with that accursed axe blade. No surprise, given that the pungent glow of his blades would have made that coward a target, that not even Soviet conscripts would have missed, especially considering that the ambush took place in the dead of the night.
Slowly that mongrel approached me with a filthy laugh: "Hahaha, so this is the Forgefather of Dobrzyń. I really didn't expect to catch a fish that big on my hook, this time." I wouldn't have hesitated to told to screw himself, if it wasn't for my critical condition. I barely even remember him boasting about hanging my head on his trophy wall or something. Thus he went forth to haul off with his huge axe to chop off my head until...

"Argh!!", the leader of the pack began to groan in pain as a bluish shimmering chainblade burst out of his chest. After some blood choking and bleeding, the blade was pulled out from behind. As the heavy body of the leader fell to the ground, the man behind him was no other than Brother Jerzy with his personal chainsword Witchbane. "Hang in there, Brother!!", he tried to make me stay awake and hold on to my life force but my consciousness was already waning. "Don't die on me!! HEY!!" Too late, everything already faded into black and with it, his voice. I was done for. This was the end. 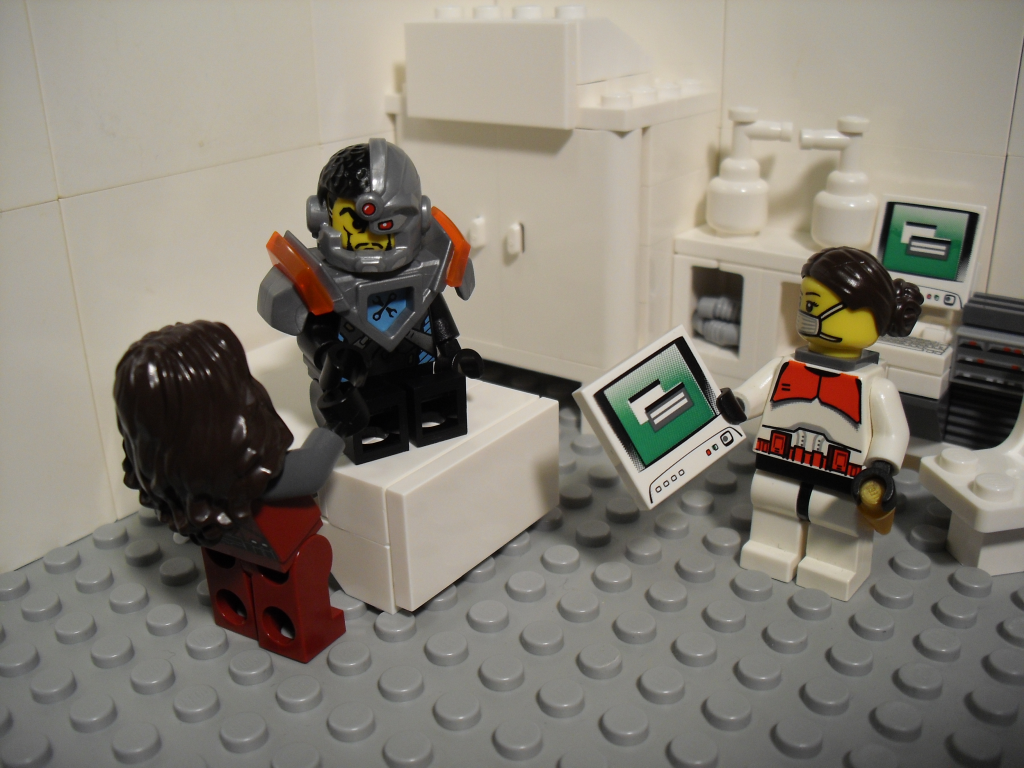 Or so I thought. Slowly I realized that I was still alive, but had no clue how or why. As I tried to open my eyes, I shockingly realized, that I regained sight on the eye I lost in that one fatal blow during that ambush. The first thing I saw, after opening my eyes again, was Brother Jerzy with a visibly relieved look on his face. "Thank goodness, you finally regained consciousness.", he said as he reached out to me. As I grabbed his hand, I did notice some pneumatic sounds but didn't think too much of it initially. But standing up surely felt more sluggish than usual.
"Take it easy, boy.", uttered a deep female voice: "You'll get enough time to get used to your new arms." "New arms?!", at first I couldn't believe what she just said to me, but as soon as I began to take a closer look at my arms I noticed that these were in fact replaced by mechanical and massive prostheses. Clenching my hands also revealed that these caused the same pneumatic sounds from earlier on. "Yeah, we tried to retain as much of your best bits as possible...", explained the same female voice which belonged to what appeared to be a surgeon of the Sisters, "but the hit you took was visibly powerful enough to not only shatter your ribs and part of your skull. Your shoulders were also affected by massive bone fractures which made saving your arms in time impossible."
I really wasn't sure what to think about it. Of course I was happy to have survived that vicious attack, yet it came with the price of being transformed into a machine; just like that one Magyar officer who got captured by a mad Soviet surgeon and immediately got turned into his personal executioner. I do wonder, what if it was in fact the will of the Great Creator? What if it means that my duty here isn't done yet and he wants to give me another chance to fulfil it? There's still a lot of unspeakable evil growing ever stronger out there in this galaxy and many lives that need to be protected from it. My duty couldn't just have ended just now; not by such a petty ambush.
"Is everything alright?", the surgeon interjected my ongoing thought process: "Do you have any more question? You might wanna look at the data pertaining your new implants?" "It's fine.", I replied: "When can I go back to work?" Hearing these words put a big smile on Brother Jerzy's face: "Welcome back, Brother. Your brethren of the forge are waiting for you." 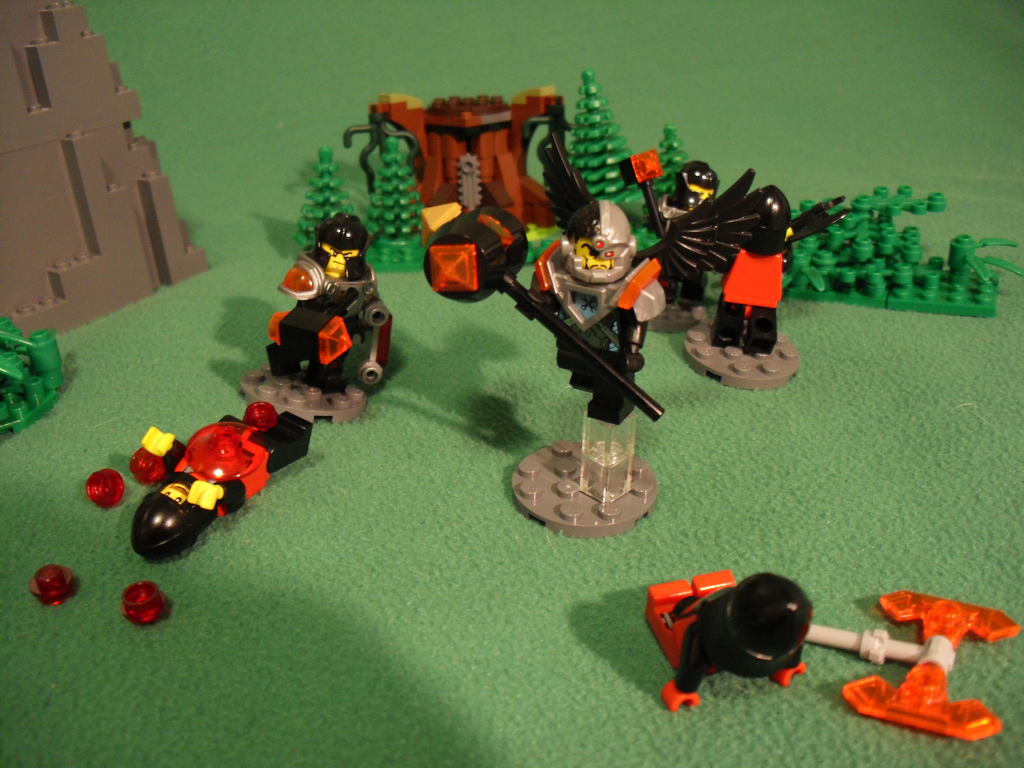 Tin man or not, I will proceed to fulfil my duty and not even death itself will hinder me. Only the Great Creator will decide, when I'm ultimately relieved from it. Until then I will continue to rain down his wrath upon every evildoer who crosses my path. If anything, my determination was reinforced by a thousandfold after that incident and by knowing that the Great Creator continues to accept my efforts.

Concept and Theme: 9 I rate this highly because it's a very clear origin story for a new hero in your army. However personally I'm not sure what the theme was as I don't know who this character was before. Maybe more detail on the Great Creator would help to show why becoming part machine wouldn't bother him that much.
Form: 9 I think overall your pacing was very good and the action was clear. I think i would have liked a rematch with the guys in the beginning to show how much more powerful he became to give the reader an idea of how he was improved.
Voice: 9 Again i think your first person POV as well done and I like this character and how he spoke. The religious stuff seemed to come out of nowhere in the end though and made me re-evaluate the character.
Style: 17 The pictures really add a lot to the work and I love how they illustrate the first two key scenes (the 3rd picture would have been better if something happened in the 3rd scene imo). As for your writing your prose is fine and dialogue is ok too. I rated you mostly for use of photography which no one else did but quality of writing is still very good (although an editor could have helped with some tense mistakes).

Concept and Theme: 8 - I like this story a lot. The main thing is that the conflict is resolved in the first half, the arc is kinda weird because of that. It's not inherently a bad thing, but it does kinda feel like something is missing from the very end.
Form: 8 - Now, maybe it's just because I'm kinda spoiled but there are a couple of commas that don't need to be there and they slow down action in the most intense part of the story. Some of then sentences in the first half also lack energy. But as a whole, pretty solid.
Voice: 9 - Your characters are fine, even if there isn't very much dialogue. As a narrator, I can get a good sense of (Insert protagonist name here) and how he thinks. I really like the narration. The way the battle unfolds, for example.
Style: 18 - The pictures are a pretty big deal from where I stand. A picture is worth a thousand words, after all, and these are all quality. But what I appreciate most, I think, is the way your pictures interact with the narration. Because you start with that picture from the end of the first scene, we have that tension running through the entire scene.
Total: 43