Sir Sporktimus wrote:So, is the Armies chapter in 2010 up for most people? It's still displaying an ominous Brikthulu in my experience. Thrilled that we finally are getting those rules, though!

You've probably got the old version in your browser cache. Try shift-reloading.

You're the best, Stubs.

That reminds me of a story though. When everybody was waiting for BW2001 chapter 9, I set up a script so that anyone who loaded the page would only get the first 1,000 - 9,000 characters, and then it would randomly cut off. I thought sullis3's head was going to explode.

stubby wrote:I might just say that a Squad whose combined Size is at least as great as the combined Size of everyone they're engaged with can move the whole engagement with its angry inch each turn.

You just explained to me why pushing when FE is out of the question. There is just to much mixing and the coherency of the front lines is gone. So moving the whole engagement along doesn't seem to make any sense to me in that context.

This isn't about pushing, it's just about the fact that nobody's standing still when they're fighting. If you make up at least half the rioting mob, then you have a certain amount of influence over where the overall mob is moving. It's just the angry inch applied to a more generalized context.

If there are multiple sides with as many or more size inches than their opponents, then they'd each get to influence the movement on their own turns.


*CRAZYHORSE* wrote:Maybe it makes sense that a push attack from skirmish range increases with effectiveness the more heavily you outnumber your opponent, thus allowing big squads to push/bully smaller squads around.

It depends. For a regular Shove attack with regular distributed effects, it's the same whether it's a skirmish or a full engagement - a lot of individual matchups between squad members on both sides. For a Combined Shove, which can only be staged while squads are separated by Skirmish range, then they just each add up their own Effective Size totals, and treat it as a shove from one super-unit to another, with the standard Size bonuses for Shove attacks (ch. 8.2).


*CRAZYHORSE* wrote:The problem is that a minifig fighting two other minifg can take an angry inch back and might still be able to hit one of them while while a minifg FE with a squad of two dudes needs to withdraw first, eating shots in the process and then gets to swing his weapon.

I just disagree. You can outmaneuver one guy with an angry inch, but trying to outmaneuver two guys working as a unit is a lot more complicated if they're paying attention at all.

stubby wrote:That's the plan. There's some extra fiddlery about exactly how much a shield wall can cover - two guys in a shield wall can't protect a rifle line fifty guys wide standing behind them, or intercept potshots at a four-story mech that towers over their heads.

Right now, the way I'm planning it, a Shield Wall is formed when a shield-bearing Heavy Infantry guy is close enough to touch another Heavy Infantry guy with his shield. Those two guys are now adjacent, and start getting bonuses.

No one in front of a Shield Wall can target anything directly behind it, unless they can knock some holes in the Shield Wall first. They can fire over the top or around the side, but not through.

I am happy you kept the original Officer card in the army section of the rules. So I can still own the original officer figure 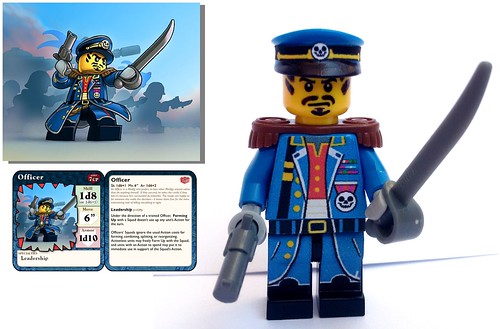 One of the items on the to-do list is to make a much higher resolution painting of that character, with a better backdrop. Computers were still pretty weak for painting when I made that one, so I had to keep it small and simple. I think he was a Photoshop 5 project, if you can believe it.

stubby wrote:One of the items on the to-do list is to make a much higher resolution painting of that character, with a better backdrop. Computers were still pretty weak for painting when I made that one, so I had to keep it small and simple. I think he was a Photoshop 5 project, if you can believe it.

Do you plan to change the details of his costume?
My Youtube Channel About LEGO and Toys
Top

No, the costume will be the same.

What size are bastard weapons? 1.5"? Can they be mounted on creations? I have a spider robot with twin linked guns, but 2d6 damage is too high, and too many inches, while 6" is not enough range.
Just the friendly neighborhood Anorak, nothing to see here.
Top

Yes, they certainly can.

Awesome. The ROM-yule-ens will rise to victory on their festive terminators!
Just the friendly neighborhood Anorak, nothing to see here.
Top

So I was thinking about how co-pilots and nurses and the like would work. I know that someone mentioned a technician unit that could boost the skill die of another specialist, but I think that when two or more of the same specialist type are working together(two pilots in a helicopter, three medics in a surgery) additional units should be allowed to use their actions to increase the size of the first's skill die by one level apiece.

This wouldnt change how gunnery support works that much--currently, each additional gunner currently adds +1 to the gunner's skill roll, while moving up a dice size increases the average roll by 1 as well.

Of courage, after typing all this out I realise that additional units could add a +1 to the roll of the first instead, but I still think the skill die idea would work better.

The skill doe increase is nice because there is still that off chance that the 3 man tank crew will still utterly fail with a d10 instead of it being harder to fail with 1d6+2. They also have a chance of succeeding more than a 1d6+2