If you're firing weapons from off-map then it would be based on a Commander's Strategic Bombardment ability. In a regular game, the existence of offshore batteries (or whatever) is assumed, but in a campaign you'd probably want that to be a specific improvement at a location so that enemies could attack it and take the ability away from you.


SynchingShip wrote:The whole chapter seems (to me anyway) to strongly imply that each location is it's own little self-contained microcosm bubble, like when you pop into a "level" of a video game.

Yep. If it's not something that happens at the scale of minifigs or at least some kind of physical bricks then I want to avoid focusing player energy on it as much as possible. Map effects are only tolerable if their ultimate expression is in brick-level action; action occurring at the map scale is something I'd consider a design failure.


SynchingShip wrote:This may be fine for far-flung & abstract locations, such as star systems (but still you have Death Stars & Terranova cannons & such), but let's take the street battle scenario, for example:

If the street and buildings are close enough to interact with each other, then they're part of the same Location. If different sides control different buildings on the same street I'd assume it's because they're in the middle of the battle where they took those buildings to begin with.

It depends a little bit on weapon scale of course. If I'm playing a nerf battle between kids, they can't fire across the street, and buildings can be treated as separate locations. If the kids are having a space battlecruiser battle instead, then now the entire neighborhood or city is within easy striking range, and you have to change the scale of the locations accordingly.


SynchingShip wrote:7. How would "mobile" locations work? Floating fortresses, starbases, etc that are large enough to be battlefields by themselves

No different than any other, except that they may have some ability to move around their own battlefield (see the PARV battle for a good example). The exception would be if you wanted to take your mobile location directly to another location (assuming you had a high enough Alert level to do so), and then you'd be fighting some kind of dual-location battle, which is awesome.

That doesn't really answer the question posed by the scenario I put here, so let me reiterate:


So we have the Power-Armor K-nnnigits vs the Uber Mutants. The PAK are holed up in Bunker X, while the Muties control buildings (locations) Y & Z, along a blasted, post-apocalyptic streetscape, like this:
[X] [Y] [Z].

The PAK have a siege-level lazor-cannon they want to fire at the muties (size whatever big gun). Now sure, in a regular battle, they could hit Building Y from their Bunker X no problem, but not Building Z, b/c they have no line of sight to it (at least not until they level, or at minimum punch a hole in Building Y)

The Knights' Bunker is one location. It's controlled by the Knights. The Mutants' 2 buildings are 2 separate locations. For the sake of control/mobilization/fortification, they're all separate locations in game terms, but for the sake of "can you hit this w/ a turret-mounted present-on the battlefield weapon?" (I'm specifically not talking about "off-screen" artillery right now), they are on the same city block.

Or, here - I found an image that can help illustrate what I'm trying to get at: 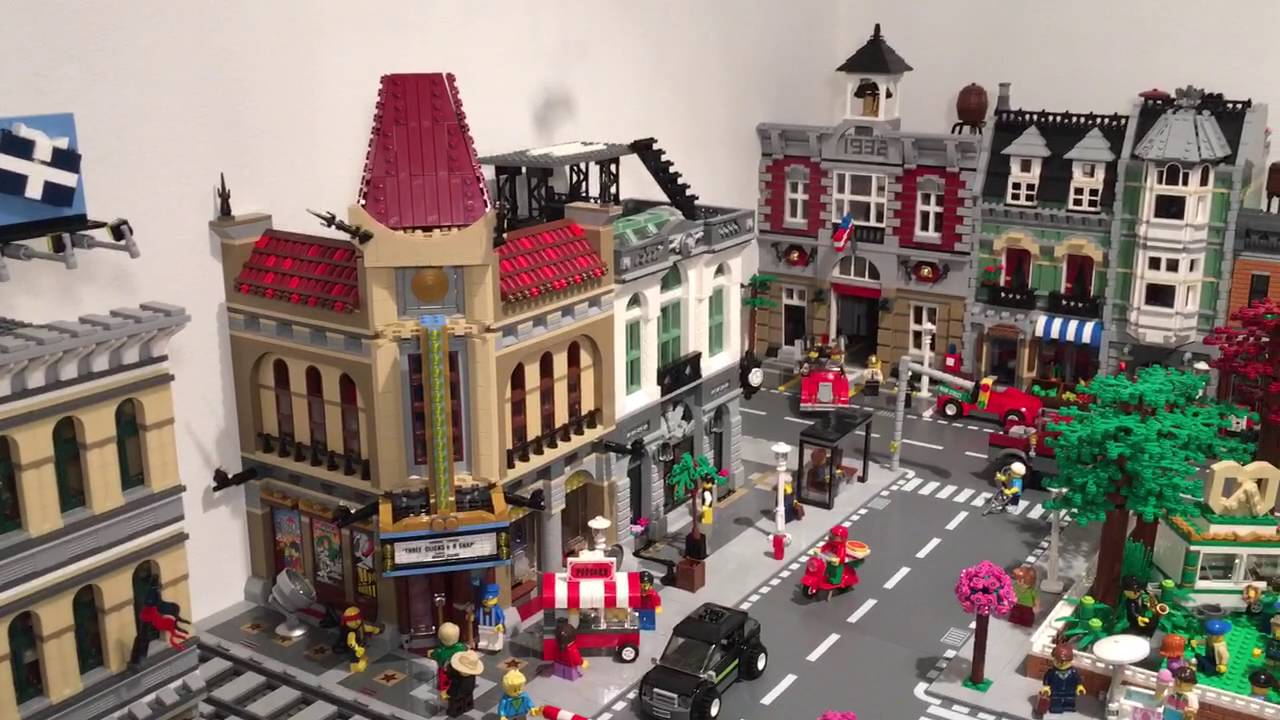 In a normal battle(field) this would be no problem - you'd simply measure range, & do your thing. In a campaign battle, however, it seems all the buildings developed as locations exist in their own magical bubble microcosms even if they're literally right next to each other, so I'm asking how does this interact on a tactical scale w/o breaking suspension of disbelief.
Top

Unless your building teleported in, you wouldn't have been able to develop it as a location next door to a building that was already in an enemy location. You would have had to clear the area of enemies before you could develop it in the first place.

Nonononono... I think you're misunderstanding me. If the street is one (1) discrete location, then you'd need multiple city blocks (or even multiple neighborhoods) as locations, which is beyond the scope I was talking about.

I was referring to this bit of text that made it confusing:


Campaigns Chapter wrote:If players instist on creating a map, they can point out the Locations' relative positioning, but this isn't necessary for campaign play. A Police Station can be a block away from City Hall, or it could be on the other side of town; the travel distance between them doesn't make any difference to the rioting proletariat attacking both Locations.

The distance does matter tho if one faction takes control of a building (turning it into a location) & decides to attack another faction's location/building from it.

That's what I've been trying to get at. If my faction has a light mortar that can hit something a block or so away, & they've got it positioned on the roof of the City Hall, whether the Police Station we're targeting (a location controlled by the enemy faction & supplying them w/ troops/weapons/etc) is 1 block away or several matters a great deal.

It also matters to the enemy Hero scaling up the sides of the City Hall to take out said mortar in time.

Having everything be floating around in abstract quantum cloud-space may, as I said before, be fine for vast intergalactic empires spanning multiple star systems & even galaxies, but when I can have my minifig sniper physically look down the street to where your guards are out for a smoke break, I'm gonna call serious BS if the answer is "nope, the bullet hits a magical invisible force-field b/c you're not technically at the same arbitrary location, even tho your weapon is totes w/i range to hit those guys"

So I guess the question is: can 2 (or more) different locations be engaged in the same battle?
Top

Two or more locations can be in the same battle if one of them is mobile and moved into the other so that now they occupy the same location. Otherwise, no - you can't develop a location within range of an enemy attack because the enemy will attack you. If two things are close enough to interact with each other, they aren't separate locations.

In this example, you wouldn't be able to "take over" a building and say you occupied a sub-part of the location if enemies already controlled the location as a whole. You either have to defeat them and conquer the whole location, or you don't control it.

What you're really asking is if there are systems in place for a contested location. And the answer is no - either you successfully take all the buildings in an enemy location, or the enemy retains control and you have to try again later.

stubby wrote:Two or more locations can be in the same battle if one of them is mobile and moved into the other so that now they occupy the same location. Otherwise, no - you can't develop a location within range of an enemy attack because the enemy will attack you. If two things are close enough to attack each other, they aren't separate locations.

So how the heck is the campaign system supposed to be compatible w/ the urban combat theater of street-to-street/house-to-house fighting (where relative positioning does very much matter)? How would developing new locations work then on the "Intimate" & "Local" campaign scopes (as outlined under Campaign Headquarters)?

In the examples given, you mention things that seem to be a very small scale on the lower end (down to individual rooms). If BrotherFig & SisterFig are each operating out of their bedroom HQ (each a location) & fighting over locations such as the den, the bathroom, the attic - they're both close enough to hit each other b/c they're in the same house.

And as far as being "close enough to attack each other", well, the Sniper effectively has infinite range, so there's that.
Top


The most subtly hilarious facet of the Deathstrike is its unlimited range. You can literally fire it at another continent.

Alternatively, phone up a distant Games Workshop, and tell them that you're targeting your Deathstrike Missile Launcher across state lines, to attack a randomly chosen game going on at their store. Even the Age of Skubmar ones, or the maybe three remaining Hobbit games on the planet.

SynchingShip wrote:So how the heck is the campaign system supposed to be compatible w/ the urban combat theater of street-to-street/house-to-house fighting (where relative positioning does very much matter)?

It's not. Jesus Christ, settle down. This isn't life or death here. It's a game. Take it down a notch.

As far as brikwars is concerned, what you're describing is a battle in a single location not a campaign.

If you're having the kind of fight that can't be contained in a room, then that's a different kind of campaign and rooms can't be locations in that campaign.

Yes... Yes... Let the booty bothered flow through you...
I make apocalypses and apocalypse accessories.

ninja_bait wrote:Yes... Yes... Let the booty bothered flow through you...

Oh fuck it got me too
I make apocalypses and apocalypse accessories.

Ffs, it was a turn of phrase b/c I was confused, everybody can just pls relax, thanks.

So... (let's all take a deep breath this time)... let's see if I've got this straight upon re-reading: in anything bigger than an "intimate" campaign, a "location" is a whole battlefield, while individual buildings are facilities w/i that location.

Does that sound about right?
Top
Post Reply
93 posts