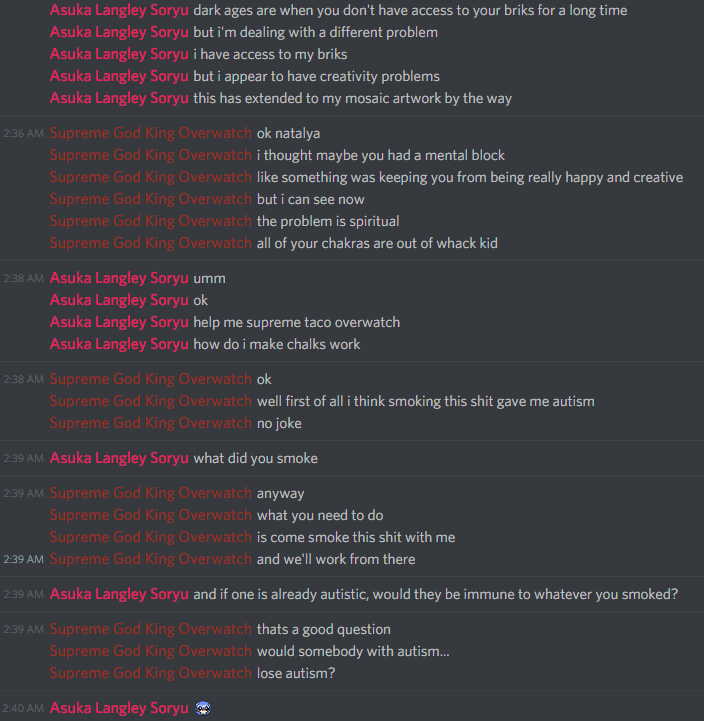 Natalya, if you're having creativity problems:

I have a creativity answer! Go to Flickr!
Top

Captain-Camper wrote:I have a creativity answer! Go to Flickr!

Captain-Camper wrote:I have a creativity answer! Go to Flickr!

Captain-Camper wrote:I have a creativity answer! There is no answer. There is only an endless cycle of destruction leading to a spiraling abyss. Despair, ye Creative, and mourn the loss of your meaning. A final, eternal Nothing is all that awaits your great effort and enterprise. 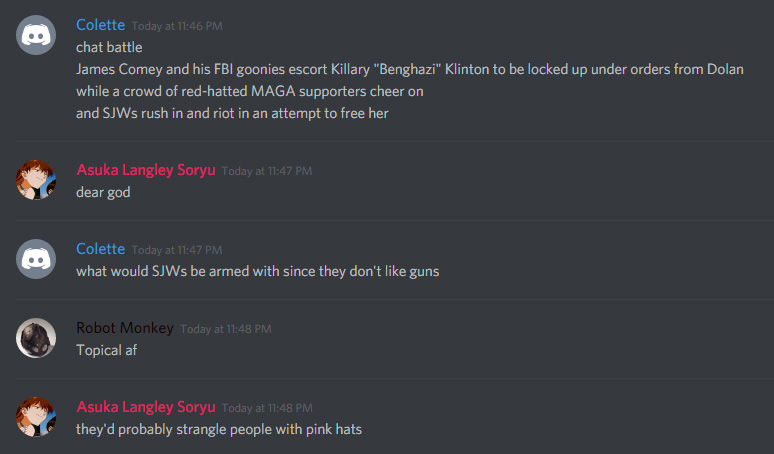 They would wield their own hypocrisy as a weapon.

or just be hypocrites and use guns
Top

Vami IV wrote:They would wield their own hypocrisy as a weapon.

or just be hypocrites and use guns

They need those guns to fight back against the patriarchy who have robbed them their sense of dignity so they do are forced to use weapons because they have no other choice and it's all your fault for being a male rabble rabble guns rabble rabble grab them by the pussy rabble rabble Trump.
Top

Wait, since when did SJWs not love guns? Most of the ones I ever met love their guns. I get that you're just going for the bullshit internet strawman caricature, but I've never heard that as part of the stereotype. Is there a joke I'm missing?

Holy shit, that reminds me

So I hung out with a bunch of guys in high school a million years ago (you'll know it was a million years ago because there's a phone booth later in this story) and we'd go around town causing trouble like high school guys do. One of them was Kaile, whose mom was white and whose dad was black, and by some twist of genetics looked exactly the same as his brother in every regard except that he looked white and his brother looked black. We all thought this was hilarious.

One day we're downtown and Kaile wants to call somebody and picks up a pay phone, because cell phones weren't invented yet. But the phone doesn't work. Somebody's cut the cord. So Kaile's standing there looking confused, holding this phone with a dangling cord hanging down to loose wires sticking out, and immediately a police cruiser pulls up. Bam, the first out of any of us to get a felony rap. "Damaging emergency communications infrastructure" or something. The police already knew it was broken, they'd arrested the guy who'd broken it days earlier, they didn't care. So now we're all laughing because even though he always looked white, getting arrested and convicted by cops who know you're innocent and don't care finally settled the question of his race once and for all. (What can I say; high school kids weren't big on racial sensitivity or anything like that back in those days. Tumblr hadn't been invented yet.)

Looking back, I assume he got convicted because his family went to court to support him. Oregon judge sees black faces, instant guilty verdict. (Even nowadays, with Portland being this big cultural Progressive Mecca or whatever, it's mostly still the "Unless You're Black" kind of progressive. But back then it was way more so.)

So now Kaile's a felon, out on probation (there was a period of a couple of years where the Oregon state prisons were full and judges were taking a stand and not incarcerating anybody), and can't be caught carrying anything that could be construed as a "deadly weapon." But he still wants to come out and cause trouble with the rest of us while we're swinging around axes and chainsaws and whatever other dumb things we thought were a good idea in high school. If anybody remembers the RUBBER CHICKEN COMBAT STORY I've told here in the past, that was one of the solutions. But the other solution was these giant dildos he picked up from who knows where.

Now I never myself wielded the dildos (or had to fight against the dildos, luckily), but I'm told that getting hit with them is like a blackjack sock party. They're big, they're heavy, and they flop around you rather than bouncing off, so it's a solid transfer of kinetic energy that's bruisingly effective at knocking you out cold if you get hit in the head, and bruisingly effective at bruising you otherwise. Non-lethal! They were particularly useful for climbing out the back windows of a car (usually mine) and swordfighting over the roof of said car while the driver (usually me) swerved back and forth as hard as he could trying to make both of you fly out the windows and die (because high school kids are a lot of things but smart isn't one of them). I wasn't able to successfully kill any of them, but I did my best. A couple of them died later under similar circumstances (one even got a writeup in Reader's Digest! which was a big deal back then, I guess? Does Reader's Digest even exist anymore?), but they were circumstances that also got the cars either totaled or impounded, and that would have been super inconvenient for me personally.

stubby wrote:A couple of them died later under similar circumstances (one even got a writeup in Reader's Digest! which was a big deal back then, I guess?)

Oh, I forgot the moral of that story. If you make a bet with somebody that you get his motorcycle if he dies first, and he gets your guns if you die first, make sure to get it in writing. Because their parents do NOT think it's funny when you show up to collect the motorcycle.
Top

I feel like a better person for having heard it.
Top

Wow my life was so boring.

Or I probably just forgot everything that happened.
Top
Post Reply
385 posts