The Galaxy has been redrawn into several large regions. You can see the new regions below. these are treated similarly to that of continents on a planet.

Northern Spirals - Comprising of only a few, technologically advanced and powerful empires, with a few smaller powers based out of here as well. The USA, Trattoria and Imperial Magikstrate are the dominant powers of this region
AUC - Anti Uasciri Coalition
TK - Technokratic Union
DRK - Darkstorm Empire
SSA -
ELD - Eldorria
MJO - Majoria (the promised land)
MJE - Majeria


Vipirath Wheel - A small cluster of systems on the very tip of the northern arms. The Emerian Empire is the only minifig civilization in this region
SPA - Secondary Phalek Alliance

Inner Core - (Currentley a typo on the page, says Inner Rim), A Compact segment of territories closest to the galactik core. The Scythian Empire is the dominant power in this region, with many Anti-Immortal allies
ZMC - Zupponn Mining Company
UKL - United Klingdom
FRG - Federal Repbulik of Germeny
TSOC - The Synthetic-Organic Coalition

Outer Core - A large grouping of old empires, the Assyrian Star Empire and Briktopian Systems are the most dominant powers here. Both the NATO and Anti-Immortal Alliances co-exist here.


Southern Expanse - Formerly known as Pan-Germania, The Southern Expanse is the stronghold of the Third Alliance, almost all factions in this region are in some sort of alliance with one another


Southern Sprawl - Also known as the Shire, and "Immortal Space" Most of the factions in the compact Sprawl are aligned to the service of the Immortal Empire in their campaigns against the Anti-Immortals.


Western Arms - Formerly known as Pan-Slavia, the Western arms are the most heavily militarized systems in the galaxy, embroiled in a clusterfuck of titanic proportions. The region also see's the galaxy's largest Peach population which further fuels the fires. The 45th Union, USSSR, Polish Republik, Galacian Imperiya and the Stranians all lock horns in this region, with several regional powers also involved. No one faction controls the Western Arms

Western Badlands - A sparsely colonized extension of the Western Arms


Magikanellic Wasteland - Once controlled by Nazis, it's called the wasteland for a reason.

Shoot, looks like I have some work to do. Adding Magenta sector, wohoo

Doesn't M-Throne have it's own entire galaxy.
Besides, you now remind me that I need to update my sectoral map once again, especially after the advent of Monet and the formation of the Unified Republik of Poland: 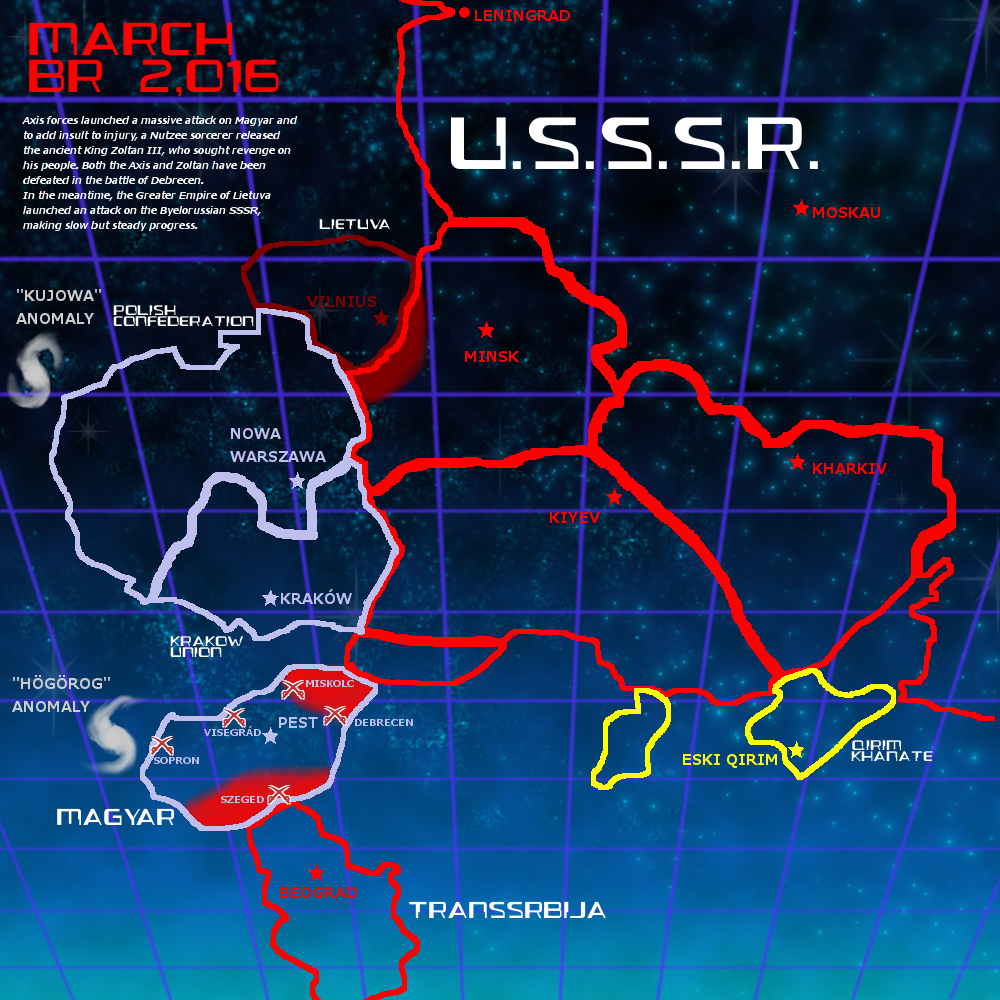 Bavaria is 61 systems, if that makes a difference.
Top

Ah sure i guess i will throw this out there.

Atherta Federation
Approximate size of 125 systems
If possible should be put on the left side farther out but in between Tyronia and Denmark
Last edited by bann154 on Mon Nov 07, 2016 1:40 pm, edited 1 time in total.
My Factions/My Battles/My Painting and Modelling Adventures
A mind without purpose will wander in dark places
Top

Now that I read that you wanna have elaborate system counts, there you are:

Unified Republik of Poland - 250 systems
Republik of Magyar - 40 systems
Autonomous Republik of Transsrbija - 30 systems
Qirim Khanate - 20 systems
Greater Empire of Lietuva - 30 systems
County of Monet - pending, for they haven't been featured in any story related stuff yet (I'd say around 30-40 tho)


There's also a bunch of SSSRs I made as Soviet satellite states, which aren't meant to count to the 1000 systems the USSSR already possesses.

A Large chunk of Scythia has been invaded by the Immortals due to the war, that should be taken into account. Make some cross hatch region where the two meet.

The sector in which all of my stuff resides is the magenta sector, a cluster of about 600 systems. On the map, It would lie somewhere between the Purple Sector and USA, but still a little off to the outer rim

Novium is on system in its own pocket Galaxy, but can be reach by an anomaly within the Magenta Sector.

For planet count Venice has roughly 200-ish systems, anywhere between 195 and 205. Somewhere between 1/3rd of that territory is currently occupied by rebels, but since that situation hasn't changed since when the original map was made it doesn't really need any updates.

Also, one thing that might be helpful is that the M-throne, like the Immortals, only have a vanguard force in the galaxy proper (I think they might only control one planet within the nehellenium directly but I can't remember) and that they both control whole galaxies off the edge of the map. So you might want to make a zoomed out map showing immortal and m-throne galaxies next to the galaxy nehellenium if you want to depict their massive power via maps alone.
The only unflawed system is Lego System.

I'm gonna have to organise my factions sorry. Ill try and post there stats asap.

I do kinda play a different game with a different universe, and I am gonna have to ask the game creator if he minds me linking our universe with the brikwars universe. If I do happen to post my factions in this thread, please note that my galaxy is very small and divided into two parts,one known as the Leaf Cluster and the other as the Sondokiak System. There are a few more but they are minor systems. So all up my factions are spread across 50 odd planets. So the Planetary Levitican Empire is only 37 planets/sectors strong, lot smaller than other large-ish factions but it is considered large in our universe.

I came to the BW forums through runnybabbit223 after I had been playing my Lego wargame for 3 years.( the guy who started up the Rank Request Topic MK2 and the TGIA owner.) and thought "wow, a place full of people who happen to use lego as wargaming miniatures just like us, and they play a similar game!". I never thought of these sorta dramas before I joined up tho

Hopefully I will be able to post the sector size of all my factions here, as I really want to make my mark on the Brikwars Map!

for clarification. the no. of systems is just a general rating.

So like, We know that USA has 500 (or 600)... So we say that another empire of 500 systems is about the same size. Unless anyone else has a better empire to use as a point of reference.
Faction Index - Flickr Gallery

RedRover wrote:The sector in which all of my stuff resides is the magenta sector, a cluster of about 600 systems. On the map, It would lie somewhere between the Purple Sector and USA, but still a little off to the outer rim

Novium is on system in its own pocket Galaxy, but can be reach by an anomaly within the Magenta Sector.

I believe the purple sector lies in the west, with the "Red" Territory, this area is going to be by far the most crammed. Which means I need to do some shaving

There's a few empires here that I "personally" haven't seen or heard from in years, wondering people's opinions if I start shaving off some fat from factions like Valoros, and MASS.
I may also have to widen the distance between the colored groupings, especially in the north. Shit's going to get sardine canned real fast.
Faction Index - Flickr Gallery

I think I gave you the google doc with all the empire sizes of every country included on the map so far.

BW Chat wrote:other random map considerations from the peanut gallery
-the Immortal War zone - Immortals border Scythia and Britannia, TLA borders all 3, Scythia should be in same region as TSOC and Assyria
-Britannia has the most trade routes and Venice has the second most
-Space Canada has to border and be to more rim-ward from the USA
-Scythia has to border the galactic core
-Assyria has to be on the rim to respect Tuefish's old map
-Trattoria is on the tip of a galactic arm and only connects to Assyria
etc.

I suggest handling M-Throne the way the Immortals are handled - having a "tiny" beachhead in the galaxy (the M-Throne and Immortal homes are from different "true" galaxies, which are as big as Nehellenium and unfathomably far away so no real point including them).

Since everyone (mainly Duerer) apparently wants to be in the Western Arms, I would recommend shifting everyone to the right a little, shrinking Valoros (AN trusteeship council seizure), and cannibalizing a little USSSR space for the Purple Sector, which should give you more room to play with in that sector.

Also, I would be hesitant about throwing out any countries on the existing map - not all of them have been active, but a lot of them are timeless classics featured in past lore and battles which are good to have on the map for historical reasons, and they always get revived when you least expect it.

Personal stuff: Trattoria is 150 systems, an almost perfect circle in shape, and should be far away from everyone in the Northern Spirals since it's the antisocial nation.
Top

The Phalek empire has about 153 worlds in it.
in total, the rest of S.P.A. has roughly 80. (apart from the megalopterids, I haven't decided how many they should have.)

would it be possible for the Phalek empire to be a sort of clump in the North of the Galaxy, whilst the other, smaller nations are scattered in close vicinity around it?
(Apart from the Megalopterids who would come from a small galaxy a bit further away. )
Last edited by motorhead fan on Wed Nov 09, 2016 6:33 am, edited 1 time in total.
Phalek empire, S.P.A., Belgïe, My claim to not being a shitbuilder.

Eldorria is really small and just south of the USA.

The Celestial Kingdom is about half the size of the USA and on the other side of the blank hole wall.