Howdy folks, Runswith Lego here, Freshly Graduated from College and Back in a place I think I can actually have time and focus to play with Lego as a hobby again.

The first thing I'm hoping on doing is looking into all of my factions and reforging them. I made the majority of them a whole Six years ago, and have changed a bit since then. Not only that, The forums have changed, the plot lines I've had on the back-burner are old news by half, and the goals I had in mind for my armies may not fit in with the community as easily.

Now of course, It is fully with in my right to shrug at all that, and just keep chugging on at what i have, But What I've missed most about Brikwars is the community and the sharing of ideas. SO i'll be trying to get a feel for the pulse of the Community again, and while I do that I'd like to use this Thread to throw around ideas for my factions and take input from you all.

So, Let's get started!

Most recent thread i can find about them: http://brikwars.com/forums/viewtopic.php?f=17&t=9457
Made back in 2012, they really have not changed much. they are my largest faction as far as I can tell and Have a significant force of armor and men.

IDEAS FOR REKONSTRUCTION:
#1: Keeping them as they are and just cleaning them up and reworking their lore by way of retcons or time skips to match the ciurrent politics.
#2 rework them into a SCP inspired Mobile Task Force unit. It'd be fun to have battles against the Various Anomalies of the Brikverse, and have pseudo-SCP's that connect my faction to various points in the brikverse to pick fights with other factions.


OTHER FACTIONS:
http://brikwars.com/forums/viewtopic.php?f=17&t=9085
Here is an out dated look into my old factions, I'm currently collecting them and taking new pictures, And wondering if I have any newer threads on them.

Ideas as of now: Reworking my remaining Clone Troopers into a Starwars Faction of Scattered clones who will fight droids in normal ass Starwars the CLone wars Battles, Because I'm on a SW:CW kick atm and want to, that's why.

Reworking the Peaches of the South into a more cohesive force that does not play into the old tired "racism-satire" that was all the rage in my day on the Forums. Dunno how though. Having them as various Factions would work fine 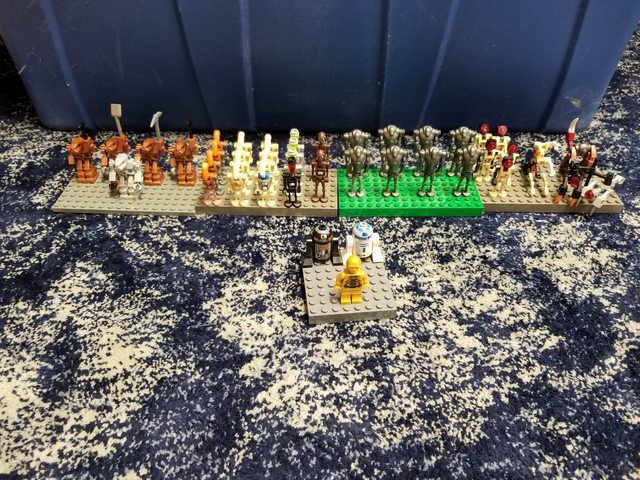 Imgurlink with a detailed run down of the units
On an isolated and resource poor planet far far away, a hidden Synthetic Intelligence Conglomorate automated factory has been activated by a rouge Android and it's astromech assistants. Thirsty for organic suffering, this robot army marches endlessly towards the stars, though due to lack of resources this force is mainly kept together by gumption and elbow grease.

IDEAS:
as of right now the SIC roboforce is a generic robot army with some recycling themed troops. I plan on using them fir starwars themed battles for now and thinking of ways to integrate them into personal lore as i go.

Some random ideas:
Im considering reintegrating my junktron ideas as bigger bots for the bot faction.

Maybe i could use my current peach forces as civillians on that planet, fighting desperate battles against the SIC bots.
Ideas for the acronym:
Synthetic Intelligence Corp.
Or mabe Synthicated Interstellar Conglomeration
System of independent Confederacys

that's all I've got for now, Please throw ideas at me, and I'll make sure to update this thread with doodles and actual Pictures! yeeehaw
Last edited by RunsWithLegos on Wed Sep 05, 2018 4:42 pm, edited 2 times in total.
Blown face Cologna

@Colette
Thanks, and that sure is a lot of various fractions to face.

I'm kicking around the particulars, like. Is my force mainly reaserch or military? Normalcy protecting or self seving? Anomoly using or destroying or containing?

I'm thinking i may theme them as a little more kleptomaniac than the scp, gathering anomalies out of compulsion at the highest ranks. Perhaps the broad goal is to keep the universe from rekonstructing before it is time, because it does not make much sense to me to play to the Masquerade theme of the SCP foundation, because reality is si damn unstable in the brikverse it is all but usless/constraining.

or in this case, links
Blown face Cologna