Minifig of the Month

Texhnophille wrote: Looks like 501st torso is the top of the line eh?

Yup! The 501st torso is personally one of my favorites- it goes so well with so many things. Misc. Not the most creative build, but the core reason for my recent BrickWarriors was to obtain that trenchcoat and matching fedora. The GCPD (Gotham City Police Dept) has been woefully under-represented in all of the DC/Batman sets! So I took an appropriate torso, a head that looks close enough, added the trenchcoat and fedora, and voila - GCPD Detective Harvey Bullock! Yes, there is a REASON I'm doing mods like this. I'm prepping for a big Batman-themed Brikwar, which depending on my access to other players, might wind up becoming a Forum Battle. This does require me to find some appropriate "gangs" for the Batman theme though, and the GCPD has to be one of them, in my book. Next planned mod: Detective Renee Montoya. That and some accessories for Bullock.

by Texhnophille
Never seen those trenchcoats before, but they look pretty cool. I'm kinda interested in that Gotham-themed battle you're planning.

by ninja_bait
It's June! More minifigs! 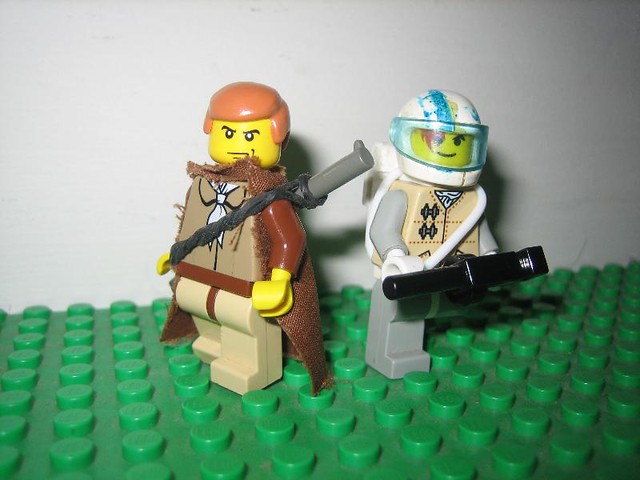 Rick Hunter is an independent space smuggler and soldier of fortune. A meticulous planner and natural leader, Rick counts on the members of his eclectic crew to pull off the toughest jobs. Their improvisational skills are often a key part of plan B.
(References: Mal from Firefly, Hannibal from The A-Team, Garm Bel-Iblis from Star Wars)

Talen Carde is a former Imperial Space Marine who joined up with Rick after retiring from the Navy. Calm under pressure and soft-spoken, Carde is nonetheless a ruthless killer. He keeps his plasma tommy gun cleaned and oiled at all times. You never know when you'll run into twenty guys you need to kill real fast.
(References: Amos from the Expanse, Drax from Guardians of the Galaxy)

Crosspost to the comic strip they're in

by Texhnophille
Talen Carde, huh... is there also Mara Jade by any chance?

Texhnophille wrote:Talen Carde, huh... is there also Mara Jade by any chance?

There's a Ghent, will that suffice? 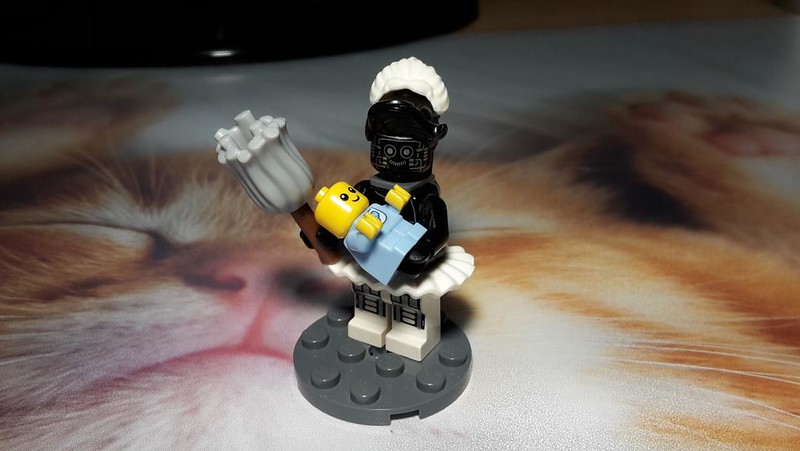 The brand new M-41D - Domestic Aid Unit is the perfect solution to all your household tasks. She is programmed to deal with any kind of domestic work, no matter how messy it might be. M-41D can also serve as a reliable babysitter or as a playing companion for your kids whenever you are busy with doing whatever.

by ninja_bait
It disturbs me

by Texhnophille
Another way to ruin someone's childhood.

Where'd you get that minifig head? If the guy on the left seems like a completely deranged psycho, it's because he is. Steven Revok is the head of private military company called Greymachine which mostly consists of failed scientific experiments once conducted by Peach Liberation Army not long after the Zulu Incident. Although a peach himself, Revok is hellbent on killing everyone involved in PLA's post-ZZD scientific endeavors. He's also a psyonik, able to shoot lighting and mind-control those who are too valuable to be killed.
Greymachine includes all sorts of soldiers, some of them having dominant Immortal genes, like Revok's bodyguard. Although those genes don't actually make them pure Immortals, they still cause certain Immortal features, such as black face and an unrelenting enthusiasm when it comes to violence.

by sahasrahla
dude that body armor is kickass, is that from brick warriors?

sahasrahla wrote:dude that body armor is kickass, is that from brick warriors? 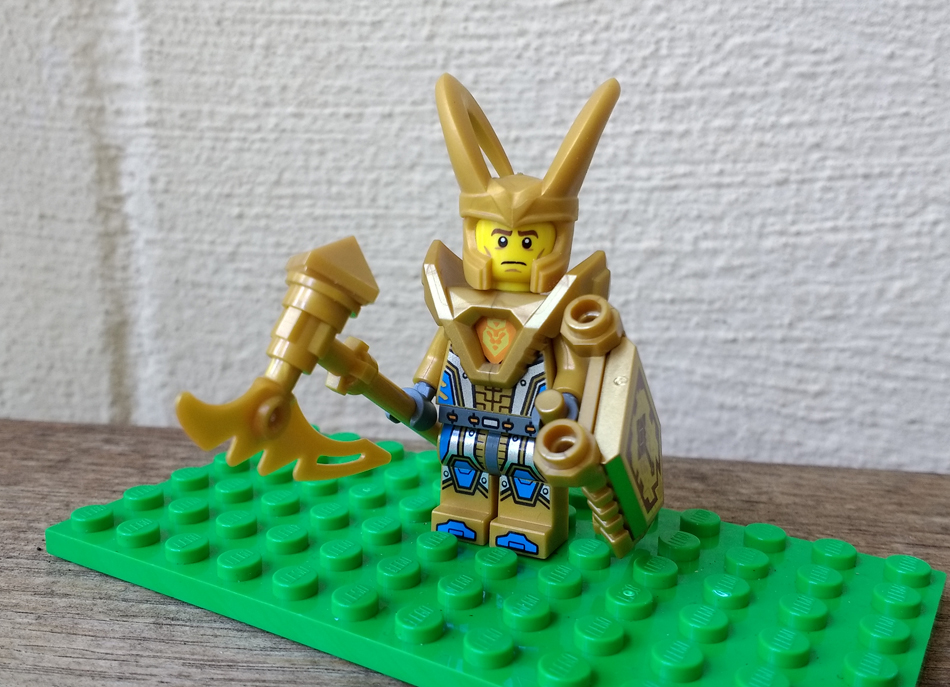 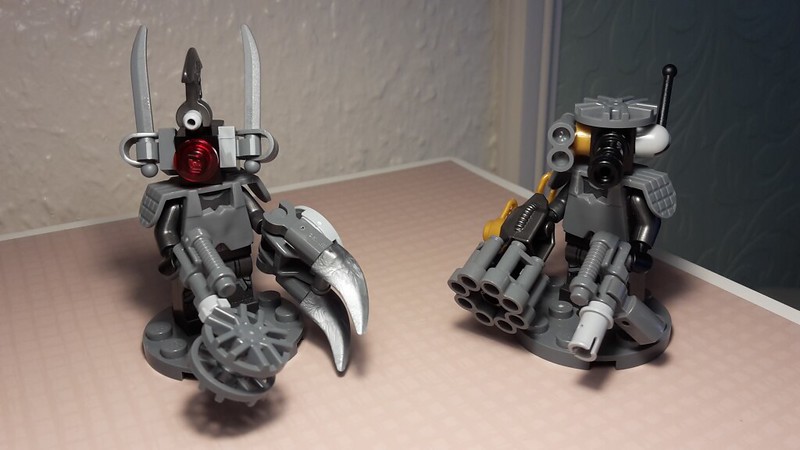 Kaiser Bros.
The Kaiser Bros. are Zoltan's to executioners, clad in thick metal armour. Being former members of the Nutzee Brecher battalions, these battle hardened badasses went on for a more worthy master to offer their services to. 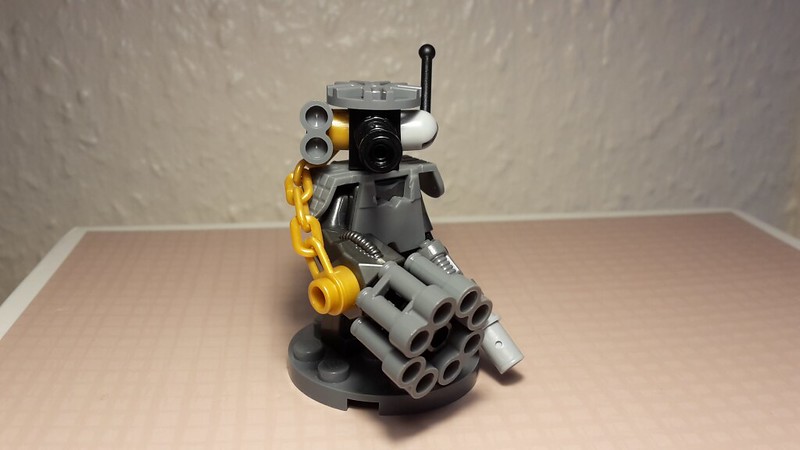 Tank-Kaiser
Tank-Kaiser is specialized in ranged combat and thus turned himself into a walking gun arsenal. With his huge vulcan cannon, he can perforate dozens of soldiers within seconds, while his side arm provides back-up for less numerous but tougher opponents. Did I already mention that his head is a gun turret? 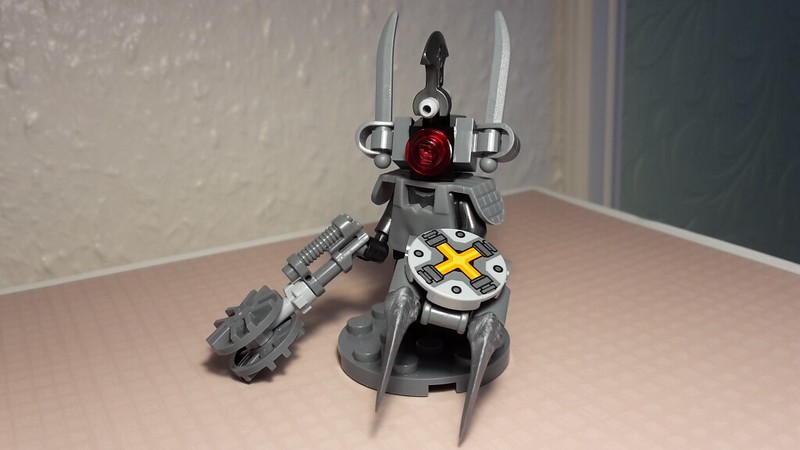 Blade-Kaiser
Blade-Kaiser is a ferocious beast striving for close encounters. No one could possibly survive a slash from his power claw or being impaled by his blade crown. In case his target does seem to be out of reach, he can still sever it from afar with his buzz saw launcher.

by ninja_bait
Dang duerer, really going after those forum highlights with these guys

by Omega Prime
Holy hell those custom weapons are sick! Are you planning to use those in a Forum Battle, because they're really cool looking!
All times are UTC-05:00
Page 2 of 5
Powered by phpBB® Forum Software © phpBB Limited
https://www.phpbb.com/