I just found a new store on BrickLink called Brick Warrior. He is doing custom stuff. I love the double bladed axe. Some of the guns too.

I ordered some stuff and when it comes I will post photos etc. 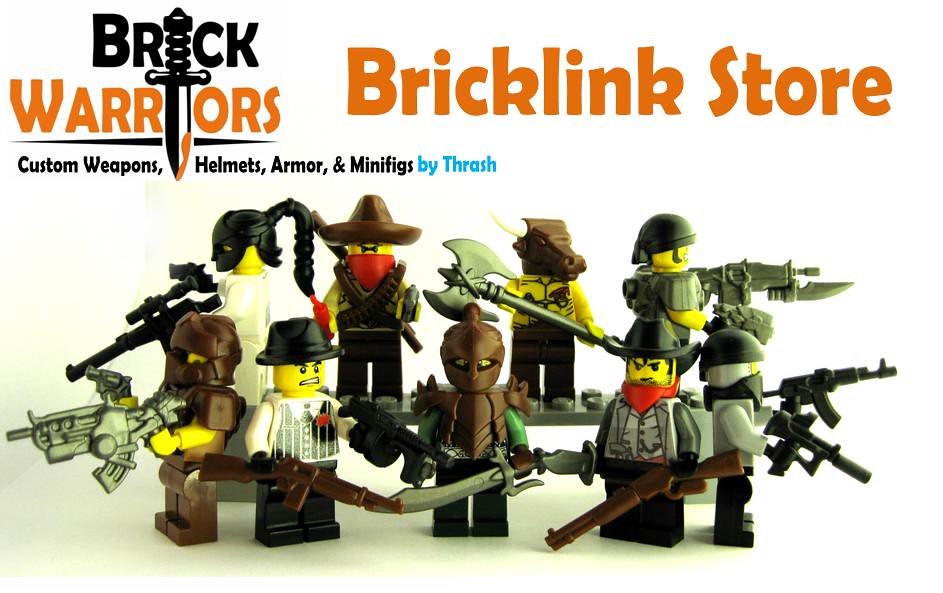 Some of it looks alright but others have this Megabloks thing going on with all the bulkiness and the huge amount of crappy detail.

I actually like some of the weapons, especially the Russian assault rifle and the Special Forces SMG.
Top

*CRAZYHORSE* wrote:Some of it looks alright but others have this Megabloks thing going on with all the bulkiness and the huge amount of crappy detail.

Do you guys care to elaborate which items you don't like? I intentionally used different levels of detail on some of the items to see which people would prefer.

just took a look, this stuff seems pretty nice. the armor and helmets are my favorite, and the resistance trooper has almost a 'hazel' feel to it. I think that your sci-fi rifles have a ton of unnecessary greebles, but your melee weapons seem nice. I also appreciate the idea for a minotaur head, and hope you can design more types. All in all, I would brobably order from you for the armor or helmets, rather than the weapons, as brickarms already supplies my needs quite nicely.

EDIT: and that colt .45 prototype looks mighty nice as well

Most of the stuff looks pretty good, especially the armour. What I really like is the fact that your BAR comes in brown, something the Brickarms BAR doesn't come in. The AK is a nice alternative to the Brickarms one, which really needs to be updated. It has nice details and I like the stock. The Thompson seems very similar to the new Brickarms one, which is most likely to come out soon due to it's design being finalized. The armour and headgear are all fantastic. But like everyone said, the resistance weapons look like Megablox.

Anyway, I'll be ordering some in the future, and I like how the AUG prototype looks.

The Minotaur heads look great, though they're a bit pricey. I might have to make an order some time. ^_^

@Thrash: Possibly tone down the level of detail? It makes them look too much like MegaBloks. Also, lovin' the tommy gun and lever-action rifle.

Heh, the name of your shop is just calling to us, you know. I'm rather interested in the stock you have, especially the futuristic guns. Keep it up!
Top

It all looks very good to me. I particularly like the Derringer, 6 shooter and snub nosed revolver. The single stick of dynamite is great to see too.
And yay, somebody has made a Tommy Gun at last!

I like the plate armour and helmets, - I can see some of my Fantasy army guys wearing those.

Overall it's a good selection of things that have been missing for a long time. And as for those who are squeaking about Mega Bloks I bet you've got a pile of MB in the closet and you sit fondling them in the dead of night by torchlight.

I really like this stuff... But i don't know if I have a use for any of it. Um if I had a suggestion, it would be to concentrate mostly on amour. as it seems to me that is one area that hasnt had any really really good options by any producer of PBBs yet, so that would be a great way to get out there if you can come up with something unique and awesome.
Top

I agree with piltogg. Every weapon you have, especially real-world ones, are going to be compared with Brickarms and other retailers, and you'll just kind of sit among the crowd. There aren't many retailers who make enough armour to compare yours with theirs, so you'll be the go-to person for armour.