While working on the Knights, I was inspired to do some artwork. Any compliments/criticism/advice is appreciated. Note that all of these are hand-drawn on 8.5x11 paper with a much larger 14x17 canvas in the background; pencil is the only medium that I have any real skill with. Of course, I'll let you guys be the judge of that:

This is Benjamin the Intolerant in full battle armor. I actually want to re-do the armor sometime; right now it looks almost exactly like Skyrim Ebony Armor, but with the BW Jousting Helmet. I didn't fill in the plumage on top of the helm, and Demon's Bane's handle is too generic, so I might change it a little later on. I also tried adding some kind of Celtic or Nordic designs into the white spots of the armor, but I am very terrible at drawing those and need to practice a little more.

This is Katrina Candor in her battle armor. Again, it looks like Ebony Armor, but I also took some inspiration from Saber's Armor in Fate/Zero and Lightning's Armor from FFXIII-2. I worked on this drawing for a very long time and I am finally pleased enough to actually show it to others, even if Katrina herself doesn't look too pleased...

This one is a bit of an oddball, and isn't really finished yet. Basically, this is how I imagine the typical lego rifle that I see all the time would look. I put a couple of these rifles below the drawing to show the difference. Sadly, I took this picture before I drew the mag release, so just pretend it is on the other side. The rifle itself is based very much on the real-life Sig Sauer MCX, which I believe is the closest real-life iteration of the lego design.

You draw a hell of a lot better than me. Looks good.

Just don't say that around her

I've never really had a problem with anatomy, but I am downright terrible at drawing faces. I probably spent more time doing faces and hair than any other parts of the body.

As for the rifle, I did mean to make it a bit longer; I was shortening it because I was afraid I would run out of paper, kind of like how I did on the stock. Here is the rifle it's based on, for comparison: http://3.bp.blogspot.com/-T336frgzpdQ/U ... m_DR_8.jpg

Ebony Armor ftw
(The picture that link goes to is not the vanilla armor. That's a mod that makes it look so much better)

This is some nice work; however, I think your issue with drawing faces is the gigantic eyes.
Top

Vami IV wrote:Ebony Armor ftw
(The picture that link goes to is not the vanilla armor. That's a mod that makes it look so much better)

This is some nice work; however, I think your issue with drawing faces is the gigantic eyes.

I think so too; perhaps the reason I draw them so large is to draw attention away from the other facial features, which I do even worse with. And don't even get me started on how terrible I am when it comes to drawing facial hair.

I've gotten to the point where I like the design of the eyes for the most part, I just need to shrink them a little. I heard that the best way to get them even is to space them so that another eye could fit in between the two, where the bridge of the nose would be.
My Armies: Knights of Aldasveign, Arcadian Federation, Calvarian Empire
My art thread
Top

A couple more sketches I made lately:

Some quick tank doodles. The top one is a Calvarian Typhoon, while the bottom is a Crusader tank. They are not to scale. I started by just drawing some boxes and cubes and then working out the shape from there, in case they look cuboid. The hulls are fairly angular, but the turrets are meant to be more rounded or sloping.

I had another go at Katrina; the drawing is slightly off-center because it isn't finished yet. She's meant to be standing over a defeated enemy and mocking him, hence the angry look. I think I did better on the eyes this time, but I'll let you be the judge.
My Armies: Knights of Aldasveign, Arcadian Federation, Calvarian Empire
My art thread
Top

Is it a double post if its more than five months in coming?

Anyhow, I present to you the Knights of Aldasveign!

The Knights' Standard Armor. It consists of Durantium and Titanium plates that are immune to anything short of an anti-material armor-piercing round. The Novite core in the center provides power to the armor's servomotors, boosting the wearer's abilities even further. The armor can function without the Novite core, but it is much more cumbersome. The helmet features a grille-like pattern beneath the armor plate; this is designed to allow the Knights to accommodate any number of helmet attachments, such as respirators, lights, communication equipment, etc. The armor itself boasts similar features.

Knight Officer Armor can easily be identified by the plumage above the helmet, as well as the blast-resistant kama worn at the waist. It also makes use of a personal computer integrated to the left vambrace that is used for tactical purposes. Essentially, it's like a Pip-Boy but designed largely for military use. This particular suit also features a floodlight on the left pauldron.

Knight Champion Armor is awarded to heroes of campaigns that have slain enemy commanders or other deadly adversaries. I hope you can forgive my terrible handwriting all over the armor. This suit was more inspired by certain WH40k Space Marine suits, namely the Emperor's Champion and Grey Knight suits.

Knight Demolisher Armor. I'm really not all that happy with this one; perhaps its the servomotors attached to the side of the arms and legs? Either way, the large power pack that you see sticking out above the shoulders provides additional strength for the Knight to lift and operate weapons that would normally be seen on tanks.

Knight Reliquary Armor is an ancient attempt to develop a new, more advanced suit for the Knights. It ultimately resulted in a failure, an so the Knight Standard Armor remains in service even after nearly four thousand years. Still, some suits of Reliquary armor are maintained by the Knights; Archon Roland himself makes use of a customized version of this suit.

Oh look, it's me...I mean Benjamin the Intolerant. You can see his helmet tucked underneath his arm, while the entirety of his suit is of Obsidian composition. Typically used only as a ceremonial suit by the modern Knights, Obsidian Armor is still strong enough to resist even the hardiest attacks. It also features a Novite crystal housed in the upper breastplate that can provide some power to the suit, though it is not as refined as more modern designs. Still, Benjamin doesn't mind - it looks awesome, and that's more important than survivability with any suit of armor.

I think I finally managed to get Katrina right this time. Her armor has been changed to appear as a lighter, more feminine version of Benjamin's obsidian armor, and she also now has a pair of rerebraces.

What would the Knights be without their weapons? Seen at the top is the ubiquitous Storm Rifle, a 20mm Short caliber weapon that serves as the go-to firearm for the Knights. Beneath it is the Storm's Herald, featuring a scope and suppressor for long range firing. At the bottom is the Dual Stormer, featuring a unique feed mechanism that makes use of both a magazine and a belt for twice the firepower. Many a Knight officer favors such a weapon.

"Don't be a heretic, recycle your brass"
Top 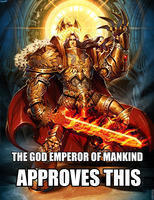 You managed to make space knights that don't look exactly like space marines, so, well done!

Thanks; the Knight's armor is based entirely around the Lego Space Marine torso armor, at least the upper half.

Also, suffer not the witch to live.

Would the Emperor approve of this: worth mentioning that i did not draw this O_o

sorry for the whiteagle'ing.
Top

No, thats the wrong kind of brass catcher for that rifle. $12, $7 on sale and it works much better than a plastic box brass catcher(assuming you orient it right and strap it tight).


Also there's NO way the Emperor of Man is paying for brass in their stubguns. They would surely be firing steel case with corrosive primer.