In the past, I have often played games of Risk (the board game), and, as a 40K player, thought: "Wouldn't it be cool if you resolved the battles with Warhammer games?"

Presenting: LANDS OF BRIK! A new semi-strategic Brikwars version for people with WAY too much time on their hands.

How it works:
6. Make a board of/for the battlefield. Now, I'm not talking about a set of baseplates truck together, I'm talking about a MAP.
Here's one I prepared earlier: 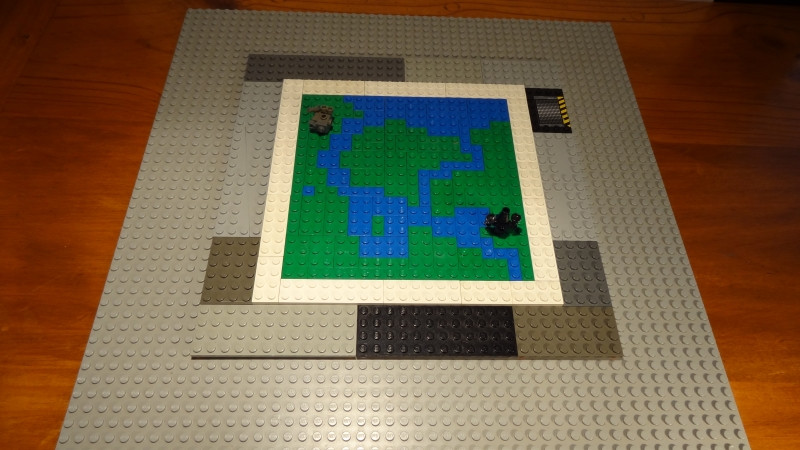 Those funny knobbly things are the bases/hq/whatever for the armies.

Now, each player aquires their army. Any size should work, but the opposing forces should be roughly the same. As long as you can cover four (4) 32x32 baseplates with your forces, you should be fine.

Each side is then divided into four (4) contingents. These can be whatever size you want - from 90% of the force to a single fig. However, each contingent should be able to fit onto a 32x32 baseplate. Designate each contingent a different stud colour, and pick a colour for your team. It should be different from your opponent's. Also, If you haven't already done so, make a base and a base marker for each army. The marker can be anything from a flag to the knobbly things seen above.

That's all the preperation. Phew.

Now, you start the game.

Each player picks a location for their base marker (this cannot be changed). The overall goal of this game is to take the opponent's base, so maybe don't place your base next to your opponent's.

Roll off to see who goes first.

RECRUIT
In the recruit phase, bring one of your contingents onto the board, in the form of a contingent marker: 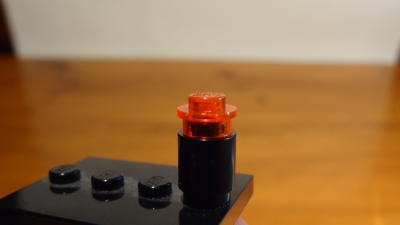 Now, if you don't have any contingents left to bring on, no problem! Simply make a new one out of some/all of the casualties, and bring it onto the field.

MAIN MOVEMENT
In the main movement phase, all contingent markers can move up to three (3) studs. This can be in any combination of directions, provided it is not diagonal.
Diagonal movement is not allowed. 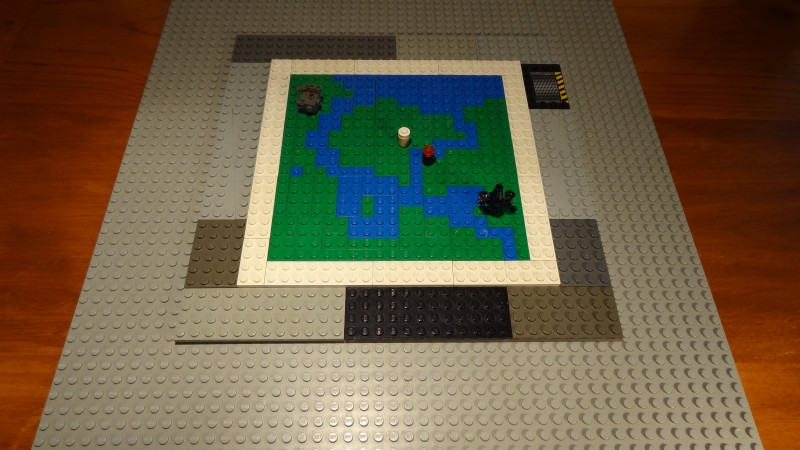 Now, as you can see, the beige and black forces are facing off over the river. Here's the orange-black contingent: 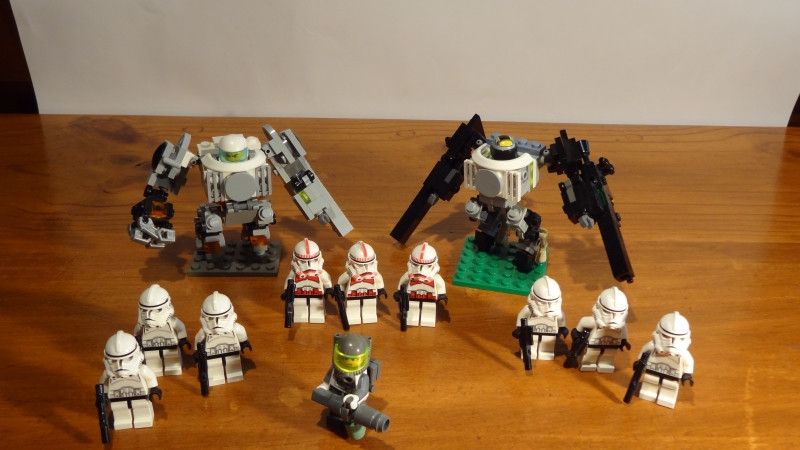 And then there's the white-beige contingent: 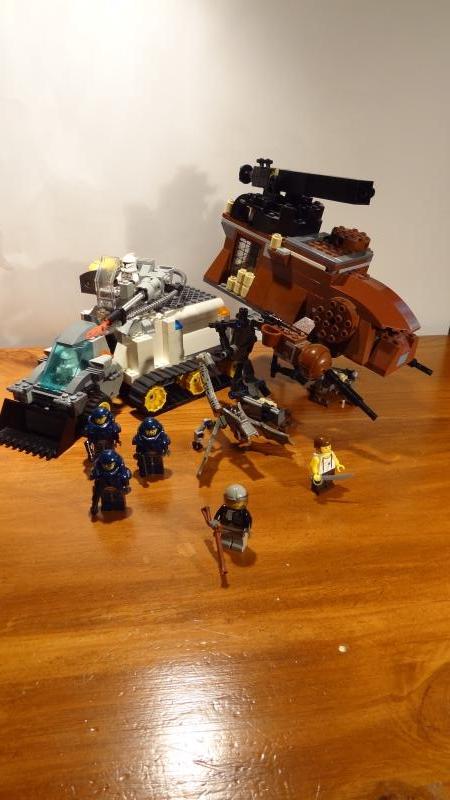 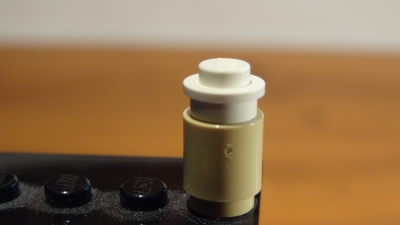 It is currently the beige player's turn. In the battle phase, they 'call a battle'. This entails picking a 3x3 area shown on the map, then resolving it in a game of BRIKWARS!

This is how it happens: The beige player calls the battle on the elbow of the river. This leads to the following set-up: 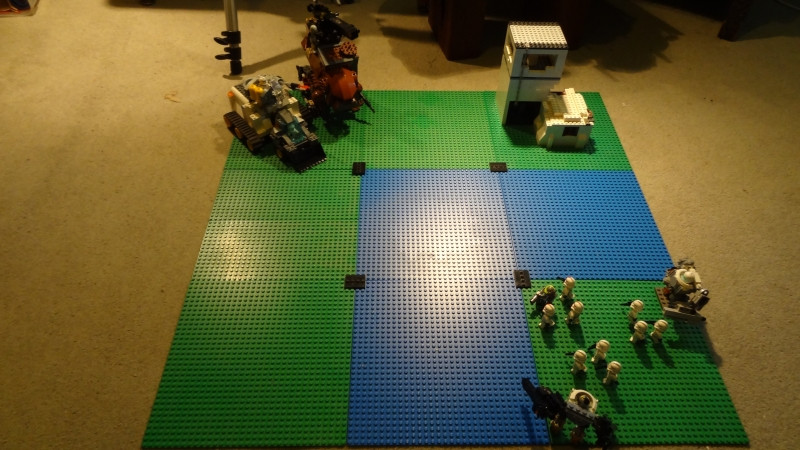 As you can see, the layout of the battlefield looks just like the map, just zoomed in. Terrain can be added to your heart's content. Then the battle happens.

This is how it goes down: 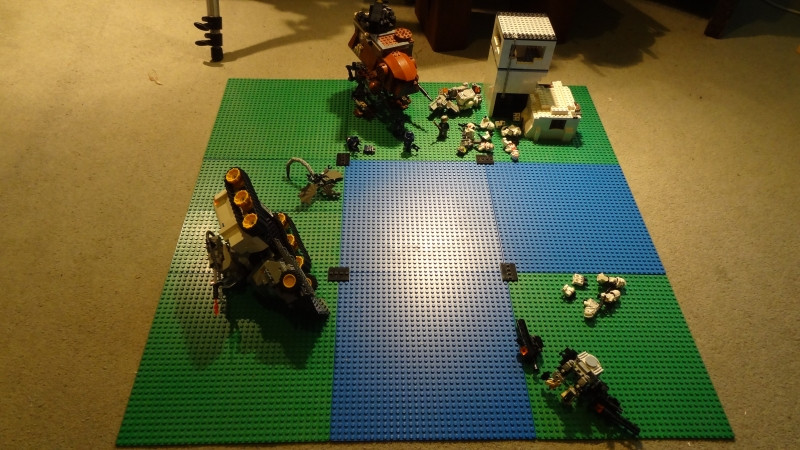 Growle and his homies obliterate everything. 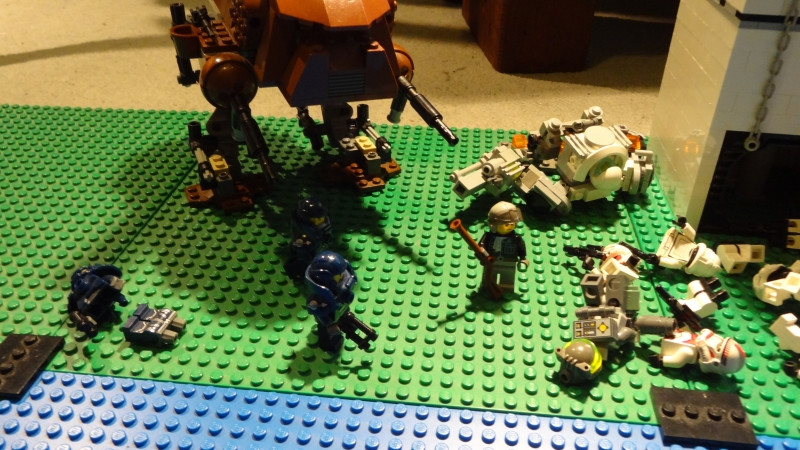 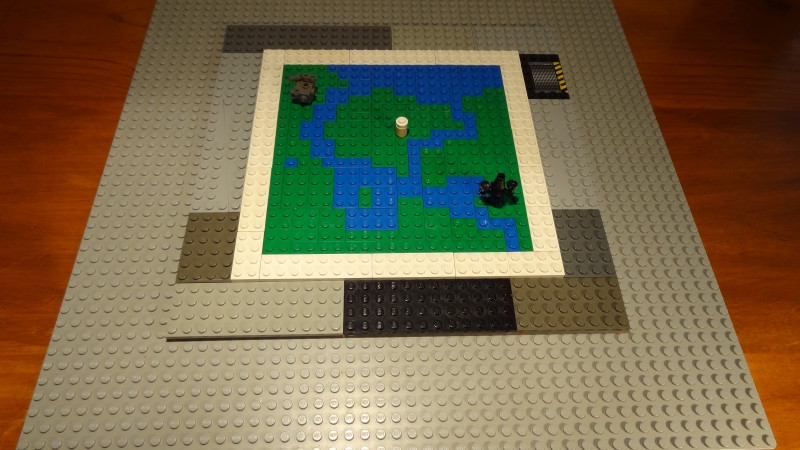 And that's how it happens.

END MOVEMENT
Now, following the rules for main movement, you can move any contingents which haven't already been moved this turn.
Note this happens after the battle.

END TURN
It is now the other person's turn.

The game ends when a contingent moves onto an opposing base, HOWEVER! Before the game ends, there is one final battle, centred on the base in question, where the defenders have one final chance to obliterate the attackers. Should they fail, it's game over. The winner may now gloat mercilessly.


And that's how it happens.
Signing out.

ALL the numbers can be changed. The total size limit, the number of contingents, the movement allocation, the battle sizes. Do whatever works best.
ALL contingents within the battle area shall be required to participate in the battle.
The hero rules apply per contingent, so each contingent can have one (1) hero without penalty. This also applies if more that one contingent is present. I repeat - heroes are only affected by other heroes from the same contingent.
If you want scenery occuring relative to the map, I suggest using a scenery marker (a single coloured stud). Whenever that stud is present in the battle area, include the relevant scenery. This scenery may even have benefits for those controlling it - maybe an alternative spot to recruit from, etc.

Really, this is a loose set of guidelines. If you think it would work better another way, or it'd be cool with something extra, just try it out. Maybe you could tell me of your exploits.

So we have been talking about strategic Brikwars for years and then the new guy comes along and shows us how it is done.

This is really well done, if I ever have an IRL campeign, then I will probably hold it this way.
The only unflawed system is Lego System.

Scratch wrote:This is really well done, if I ever have an IRL campeign, then I will probably hold it this way.

I have to concur. That is a surprisingly simple and effective way of doing a map campaign for Brikwars.

Thanks for your feedback, guys.
I was surprised that someone else hadn't thought of it earlier.

Just added to the rules slightly, I thought some things needed clarificaiton.

Quadruple.Digits wrote:Thanks for your feedback, guys.
I was surprised that someone else hadn't thought of it earlier.?

Let a little kid loose among your collection of bricks sometime, and watch the way he plays. In his hands, those minifigs will have all kinds of crazy battles and adventures, there'll be all the drama, death, and explosions you could ever want, and the whole time that kid won't have to crack open a rulebook even once. How is it that he's so much smarter than we are? The answer is that most of us have had a lot more years of schooling than he has.

Actually this reminds me of a system Bragallot has posted eons ago, although this is much more straightforward in a good way.
I really like it and once I get a fair amount of baseplates I'll probably implement it because having a scaled campaign map of medivo where you can track each and every event and army sounds way too cool to pass up.

I am not a native english speaker. Can someone explain what concurring means?
Kingdom of Denmark

It means agree. It's not allowed because many people overused it.
This sig is too fucking large: show anyway

Silverdream wrote:It means agree. It's not allowed because many people overused it.

So... Agreeing is allowed, but agreeing is not?
Kingdom of Denmark

I used to have too much time on my hands, until I started this semester.