I'm looking for some feedback on the stats I gave this tank. I don't want to make it as efficient as possible, but it should be useful and fun on the battlefield without being broken. I don't have much experience using MOCs in actual battle (at least not, according to the rules) so I'm mostly just guessing things here, feel free to correct me if I'm wrong. 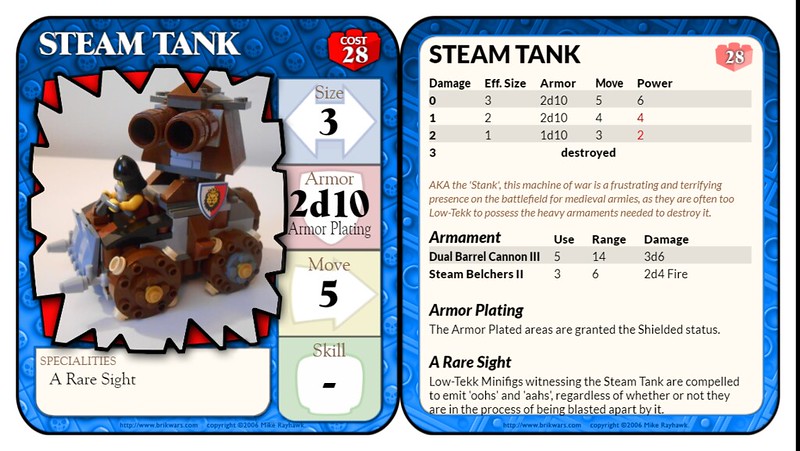 Armor: the suggested armor for a tank is 3d10. This seems like too much for me in a Low-Tekk environment (medieval fantasy). 2d10 with Armor Plating still seems like a lot, 1d10 too little. I'm currently leaning towards 1d10 with Armor Plating so the choice between attacking the tank or its driver doesn't become too obvious. I think the Armor Plating is also necessary since otherwise it would be too easy for a couple archers to kill the tank with combined damage.

Weapons: This is where I have the most questions. Both of the weapons of the tanks have dual barrels so I added their size together. Not sure if that's how you're supposed to do it but it seems to make sense to me and also means you have to spend less time making rolls. If you measure both the cannons they're about 8", so closer to Size 3 than Size 2. I can always make the barrels longer though so that's not really the issue here. If it's Size 2 it would hit more often, but at Size 3 it becomes an awesome weapon against bigger targets and you have the Steam Belchers against infantry anyway. My main issue with making it Size 2 is that it would do a laughable 1d6 damage against any target with deflection. I've thought about giving it a specialty that says gunpowder ignores armour and / or its projectiles fire too fast to be parried by shields, but I'd rather keep things simple and simply making it size 3 kinda achieves the same thing. 14" range might put it further behind the lines than I would like but I guess the tradeoff is that you're unable to use the Steam Belchers at that range.

Also, if someone were to do component damage against the weapons, they could only destroy one barrel at a time, right?

Move: 4 wheels, 1 engine (signified by the exhausts on the back), for 10" movement, divided by 2 'cos of the armour plating, gives it 5" move. This I think should be ok.
Westeron Restored (Fantasy BrikWars)
My Twitch - My blog
Top

2d10 is thematically appropriate for something partially iron-clad. You should play test it and tell us what happens, but my guess is that it will be roughly the same as having 1d10 with armor plating. Since the pilot has partial cover, I wouldn't be too concerned about people shooting him over the broad side of the tank.

The weapons seem okay but I think it is actually better to use them as 2 of each. The Steam Belchers are physically separated, so there's no particular reason to combine them into one. The cannons are limited by the fact that firing both barrels requires 6 power - so you can't also move that turn. Once you take damage, you can't fire both at all. That's assuming each is 3" long - it's not clear if that's true.

You can modify the cannon to have a lower use rating by one point by lowering the range by 5". (Stubby, was there a table of weapon mods in BW18? I thought there was something but I can only find the Creation Mods. That doesn't include weapon-specific stats, like Use, Range, and Damage.)

It may or may not matter to you, but CP is depreciated in BW18 in favor of U".
I make apocalypses and apocalypse accessories.

They're not each 3", I've combined both barrels into one cannon.
Westeron Restored (Fantasy BrikWars)
My Twitch - My blog
Top

Oh, okay. In that case, leave it as stated. It's not vanilla but it makes sense.
I make apocalypses and apocalypse accessories.

ninja_bait wrote:(Stubby, was there a table of weapon mods in BW18? I thought there was something but I can only find the Creation Mods. That doesn't include weapon-specific stats, like Use, Range, and Damage.)

They're in the Engineer's Rationalism mods. http://brikwars.com/rules/draft/11.htm#5