The Shadowscythe wrote:Actually, that is a damn sexy little fourth rater - I'm surprised I missed this the first time around. I like the amount of work you could throw into something to make it not only look like an advanced ship, but an -old- advanced ship . . . it just feels like a damn sexy old broad.

Have you uploaded this to the wiki yet newcowboy? This deserves to be added to a full fleet group, especially now rings are now the Britannian Navy's "thing".

I didn't want to put it up on the Wiki until I got a opinion on it. Also, I'm glad you appreciate the aesthetic. Hence why I like Britannian ships. They look old, but secy as hell in a firefight. I'll put it up, and I;m actually thinking about doing a small little Soap Opera thing on the Britannians. Maybe give them a few advantages in the coming conflict.
Top 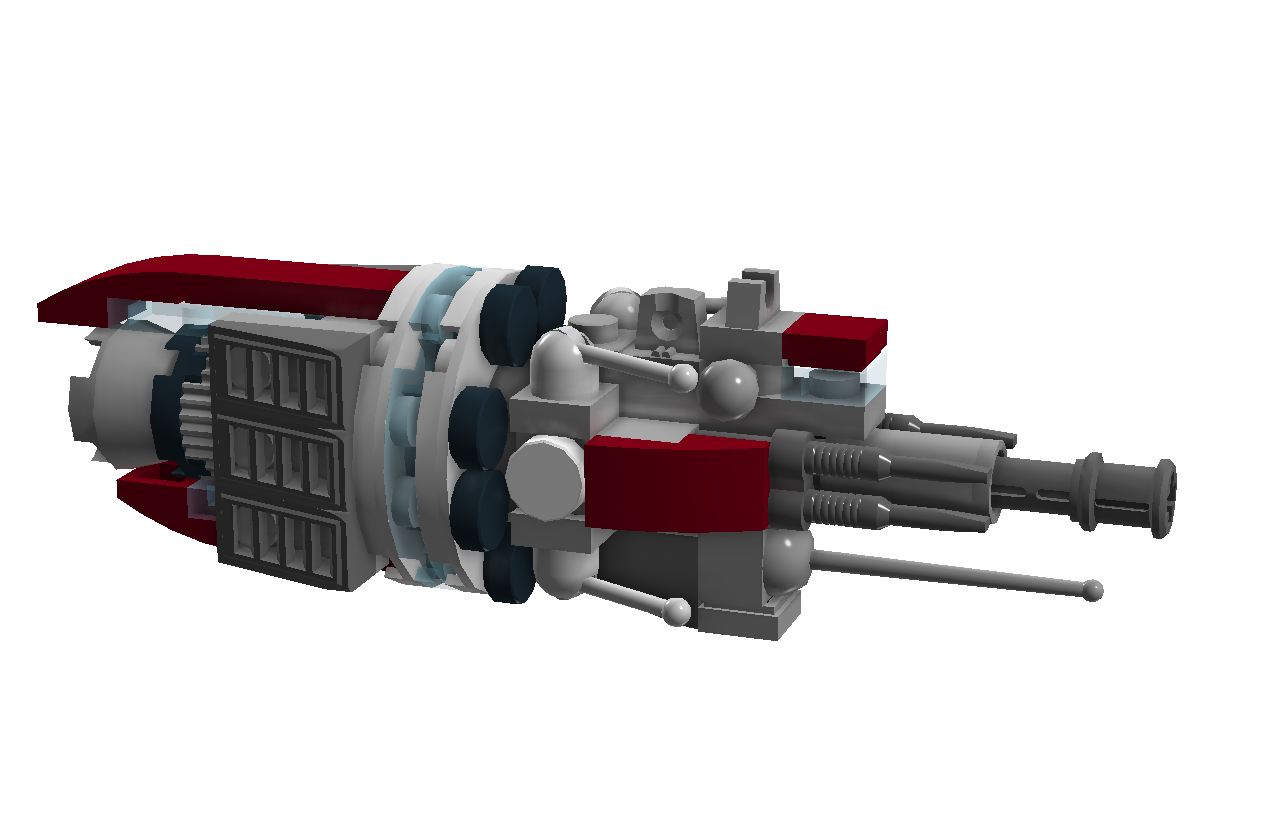 Another old member of the Brittanian Navy, the Marchant is an odd ship compared to typical Naval doctrine. It only boasts four Light Cannons mostly made for Anti-Fighter work. It's distinguishing feature is the over-sized Ram Accelerator as a main weapon, capable of tearing into Ships much greater in size. That, and the massive single engine gives the key to it's unofficial class name as a Lancer. It's main tactic is to get into range as fast as possible using it's Engine, fire a few shots into it's much larger target along with a few other lancers, before running off. It's considered by many Admirals to be a cheap tactic, unbecoming of a proper Fleet, but some smaller forces find it much cheaper to keep a hold of as a defense against larger vessels than a squadron of battleships.

And the admiralty doesn't seem to mind using them to annihilate enemy convoys either.

Loving the detailing at the front around the Gun.

We need a fleet inspection at Spithead. Really show off to the brikverse all these awesome Brittanian ships.
Almond Status: ACTIVATED
Top

Over the years the Admiralty of Grey Sector has become increasingly incensed by the bureaucracy behind the Royal Navy's high command. Grey sector has been at the forefront of the Navy's modernisation program, something command has seen fit to put a stop to, lest the budget swell even more. This came to a head when Grey Sectors own Admiral R.J. Hadrian saw fit to abandon the warnings of command, and start trialling an entirely new paradigm in Britannian warship design.

As a pet project, Hadrian requisitioned numerous warships destined for the scrap. Each was stripped, and their space-frames welded together, producing a franken-ship of monstrous proportions. This vessel was a proof of concept for a new kind of heavy warship design, abandoning Brittania's investment in shield technology seen in the massive electro-magnetic ring that made the Glasgow-Class so recognisable. This prototype vessel, served its purpose well, and gave the command admiralty a credible reason to approve an increase in budget for full R&D, and production.

The final product was the Lion-Class, a ferocious vessel worthy of the namesake. Heavily armed and armoured, the Lion class was built to lead battle-lines from the front. Plowing head first into enemy fleets, the Lion-Class can unleash 15,000mm of pure lead hell at a rate of 5 RPM from each individual artillery piece.

Their newest vessel does still rely on outdated chemical rockets for propulsion. Brittanian naval engineers created the most efficient engine block design they could, moving the fuel tanks and fuel lines as far into the bowels of the ship as they could. This was to prevent the critical hits to highly explosive fuel cache's that Brittanian vessels often suffered.

The ultimate feature that ensured the funding for the Lion-Class was Hadrian's inclusion of Aerofoils into the design mandate. Brittania lacked a capital class ship capable of atmospheric flight, something other star nations had ready access to. Engineers incorporated two pairs of variable geometry wings into the design, allowing for a range of atmospheric flight capabilities. Early tests even showed the Lion-Class capable of limited maneuvers such as barrel rolls and corkscrews, giving it a distinct advantage over other atmospheric capable capital ships.
Almond Status: ACTIVATED
Top

Holy shit. That's really good. I love the part sticking out of the bottom, and the hooked nose.

I have to say, the Lion class is amazing.

Absolutely amazing Dilanski! I especially like the functional look of the ships, they give me the impression of a well honed force of destruction, with no frivolities (Except for maybe a hidden still between bulkheads) Except the best armour and the greatest weapons.
I also really like the unfying characteristic that the big ring adds, really adds a feel that this ship belongs with the others. If I had to pick a favorite it'd have to be the Lion-class. What a ship! What curves! What skillful use of of the hinge pieces that make up the engine cover. Well done!

fredde wrote:Absolutely amazing Dilanski! I especially like the functional look of the ships, they give me the impression of a well honed force of destruction, with no frivolities (Except for maybe a hidden still between bulkheads) Except the best armour and the greatest weapons.
I also really like the unfying characteristic that the big ring adds, really adds a feel that this ship belongs with the others. If I had to pick a favorite it'd have to be the Lion-class. What a ship! What curves! What skillful use of of the hinge pieces that make up the engine cover. Well done!

Thanks, although newcowboy and scythe need a lot the credit for their vessels.
Almond Status: ACTIVATED
Top 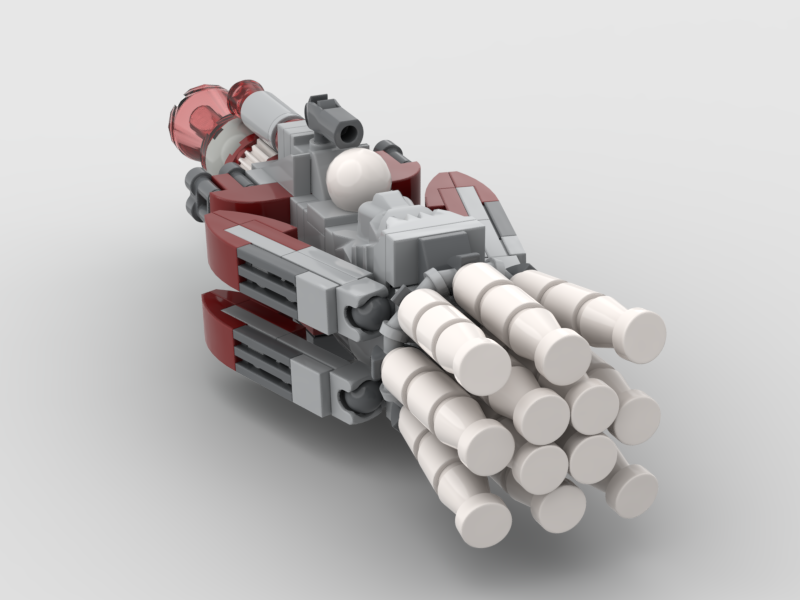 The Swordfish Class is the first line of attack in the New Model Navy. Modeled after the success of the Marchant, the Torpedo Cruiser packs a heavier punch in a slightly larger package. Armed with only a single light cannon, the ship's main function is to be a cheap missile carrier; the cradle attached to the front carrying eight massive Tri-Nuclear missiles more commonly seen on Edinburgh Dreadnoughts. It's powerful engines are similar to those on the Marchant; chemical rockets propelled with a massive fuel tank on the underside.

Notably, it is one of the few modern ships without a Warp Shield Ring; relying on a small internal warp drive as a cheap alternative and hoping that speed will outrun the enemy bullets. As a ship designed to be a defense for smaller worlds without a spaceport, it can even theoretically enter an atmosphere on those four large wings and jet engines, although its stability is questionable. 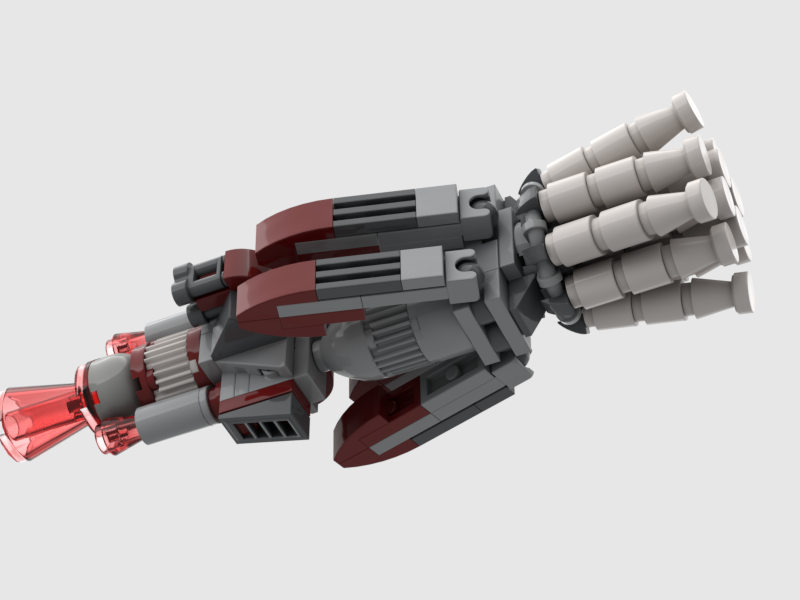 Standard Doctrine for the New Model Navy is for these ships to be distributed widely to the outer colonies as the first line of defense against more technologically advanced powers. The admiralty hope that such a battle could trade a half-dozen Swordfishes to destroy any known ship, with comparatively little loss to the overall Britannian Navy. As such, they have also begun being posted with fleets as first strike craft; sewing destruction before ditching the missile cradle and running away. 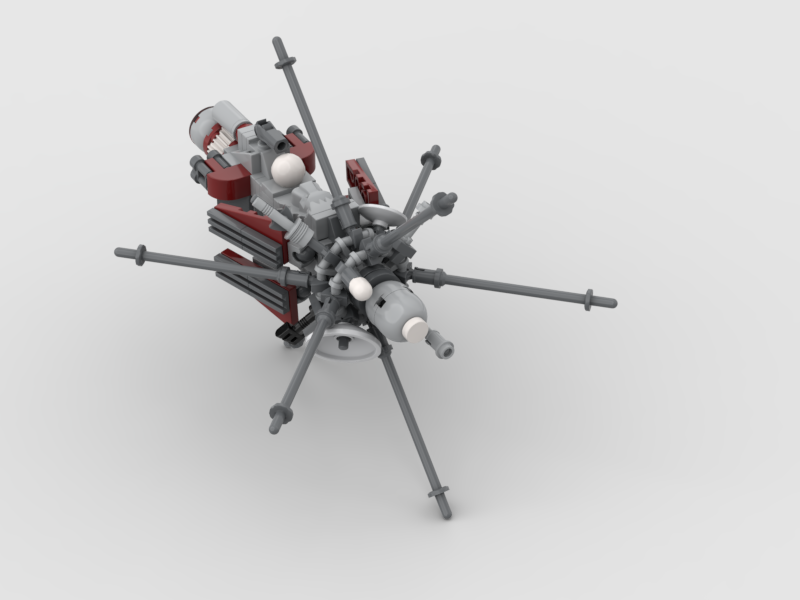 The forward missile cradle is replaceable however, with several replacements planned. One is the "Ultra" Frame, with a ton of survey and intelligence equipment attached to a forward Combat Information Center which turns the ship into the center of a fleet's operations and planning.

(Welp, two computers and four years later, I'm Back With A Couple Projects)

Welcome back from the dead! A bunch stuff happened over the years, among them the canon getting more or less wrecked but I hope that won't be too much of an issue.
Nice ship btw 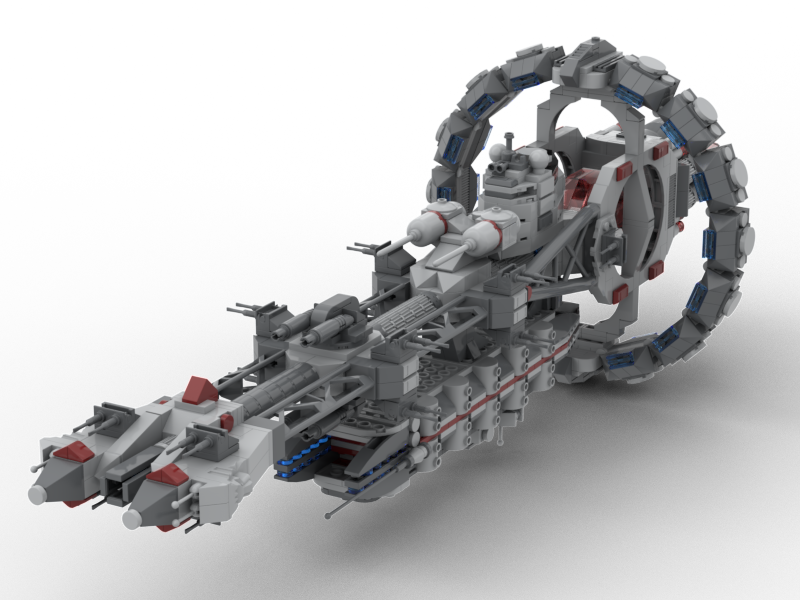 The Ark Imperial is a converted Queen Elizabeth-Class as an experiment by the Admiralty board to test the BLACK ARROW; a warp cannon designed to literally launch carrier fighters at speeds beyond even the quickest destroyers. The entire ship was ripped apart and put back together again to accomplish that goal. The reactor had it's shielding removed for that little bit of extra efficency, the remaining systems were reinforced to hold together with a mere skeleton, and then that skeleton was packed full of to bursting. It's main guns were all modernized to be either small anti-destroyer guns or two massive anti-capital ship cannons, and a warp ring was added to help it maneuver and survive any punches given the complete lack of armor. 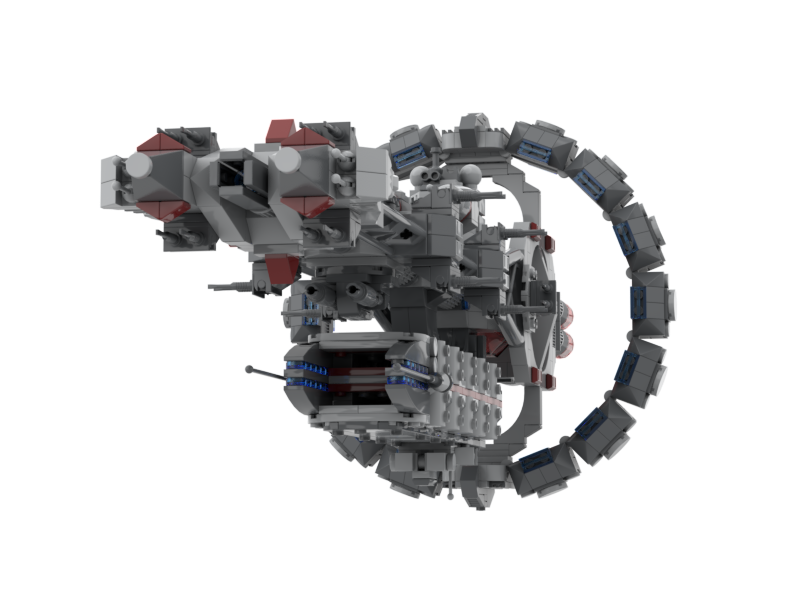 BLACK ARROW also used the warp ring, giving enough energy to propel their fighters to warp speeds through the large refitted spinal cannon running through the entire ship. Fighters were loaded like bullets into a magazine and elevated into the forward cannon, able to launch a dozen fighters in as many seconds. It's size even meant that just about carrier-capable craft could be launched, from bombers to transports.

When they returned, the magnetic clamps would slow them down to reasonable speeds and help position them to land in it's hanger bays large enough to provide a fighter escort for an entire fleet. 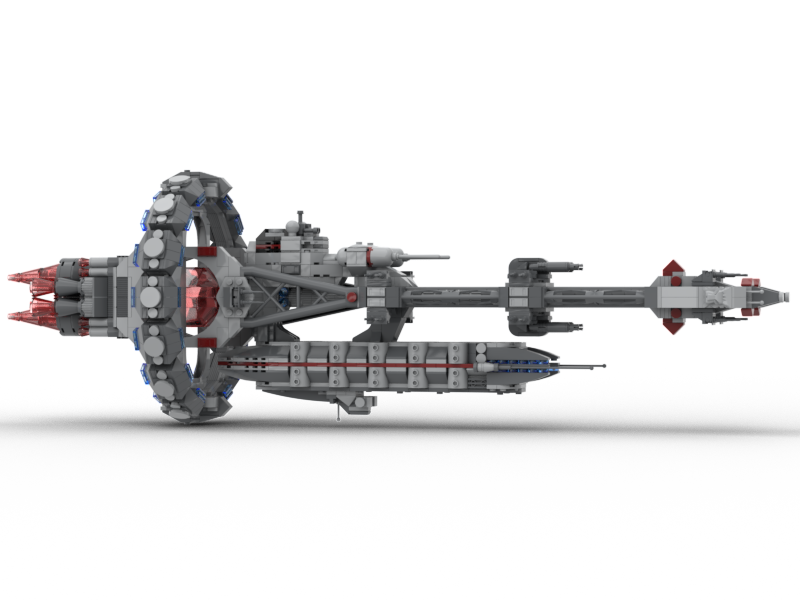 In order to accommodate the role it played, the ship had it's hanger bay essentially bolted on, held to the main ship by arches that made the entire craft look even more skeletal. Both bridges had a hard time communicating, given the distance and difficulty reaching each other, meaning that the Ark Imperial became the first ship in Britannian history to have two captains. The Ship's Captain, and the Wing's Captain. One commanded the fighter compliment from the smaller lower bridge, while the ship was commanded from the larger upper bridge. 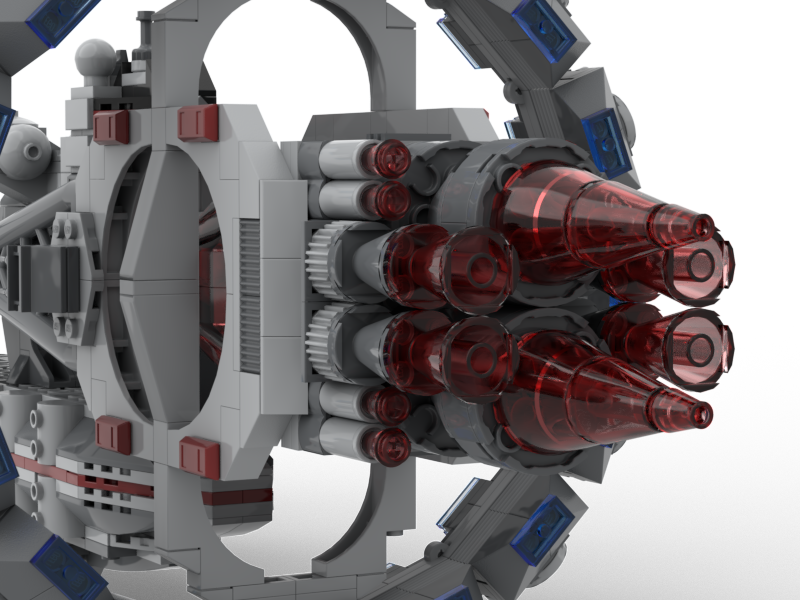 It's engines were upgraded, however even with the sheer power of such a large array of chemical engines the ship is still dreadfully slow. New Model Fleet doctrine sees the ship's place as staying as far away from a battle as possible, relying on BLACK ARROW to send it's attack dogs out to destroy anything long before it even reaches the range of it's heavy artillery. The Admiralty is curious to test if such a fragile ship can even survive under combat conditions.

Six are already in production under different designs, so they're very curious.
Top

That ship is super fucking badass

I've been thinking of similar ideas for a while now for launching fighters, the ftl aspect was something I hadnt considered though

Duerer wrote: ↑
Fri Mar 27, 2020 1:53 am
Welcome back from the dead! A bunch stuff happened over the years, among them the canon getting more or less wrecked but I hope that won't be too much of an issue.
Nice ship btw

That's my secret cap, I never knew the canon anyways.

Also I was imagining it as a very-short range FTL drive because it's a thing I've sketched for like... a couple years on and off and then realized a place like this might enjoy the silliness of just firing other ships at the enemy.

I may or may not have more incoming? I enjoy the aesthetics of the Brittanians a lot hence why I keep coming through with them buuut IDK might throw some other faction stuff out there during this whole pandemic.

I love the Brittanians, their ships are just so awesome
Yeah, you know who I am