A little bit late but here is the spring GrimDarkger film you've all been waiting for. This film is of dubious cannonicity but it will be referenced exactly once in an upcoming episode to try to boost ticket sales to what is basically a 30minute commercial at the movie theater.

The Grimdarkgers are on patrol for remnants of Silverdream's army.
Red: I can't believe it's already been two months since we defeated the Far-ums forces.

Green: You look like you could use a pick me up.

Red: Room for one more?

Ruby: It's not working!

Green: Hey, I know this forest. This is where...

???: You have a lot of nerve coming back after all these years.

Green: TreeLeaf is that you? You're an errand boy now?
TreeLeaf: Elves, we're taking them back to camp. Come along quietly, Green.

Ruby: So this is where Green used to live?
Blue: I'd gather as much, yeah.

ElderGreen: It's been a long time, son. Why have you returned to these lands?
Green: I'm a hero now. We have to defeat the alien robots that have invaded BrikEarth.

Blue: That's Green's dad?
Red: But why are they all peach?

Green: It's been a long time, DropsOfStars.
Drops: I missed you Green! Where have you been these long years?

ElderGreen: Very well. You and your friends can rest here tonight. In the morning you will continue 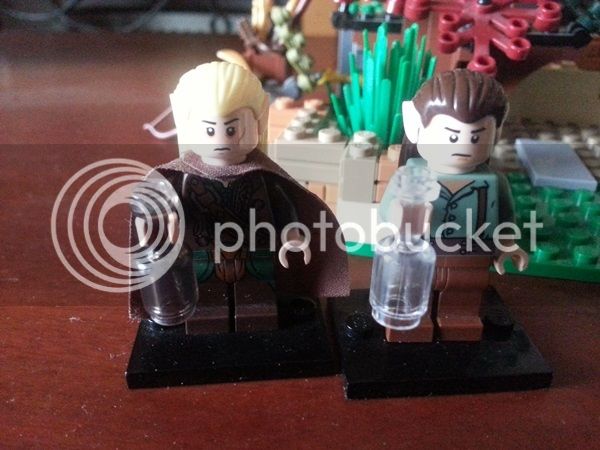 ElderGreen: We can only offer you these low quality ales.
Green: But where is the MagicGreenBooze?
ElderGreen: It has been stolen.

Red: Someone stole your magic beer? Elder, please let the GrimDarkgers recover it for you!
Last edited by Insert_blank on Mon Feb 27, 2017 2:26 am, edited 1 time in total.
Just Monika
Top

Magic beer? Count me in.

Red: Grimdarkgers move out!
Green: We'll get the beer back, Father, and then you'll see the man I've become!

DropsofStars: But Green, it's too dangerous! You shouldn't get involved. Your father will deal with it.

Red: (Completely ignoring Drops) Sis, just stay here and hold down he fort in case the Funbots attack. We'll get the Magic Beer and be

DropsofStars: ElderGreen areyou just going to let them go?
ElderGreen: Let them do what they want. We'll continue our preparations here.

Black Shadow: Everything is ready, sir. Our mole has informed us the elves are unsuspecting. However a complication has arisen...

Honore: Complication? What is it?!
Black Shadow: Well, sir. The GrimDarkgers have arrived.

Honore: Oh. Those morons? They may have killed Silverdream but it's a doggy dog world out there. We can't just give up the goat because a

few idiots in spandex show up.

Honore: My plan is perfect. With this Magic Beer all my dream will come true! For all intensive purposes I've aleady won!

Blue: I'm not sure that's how you use that phrase.
Honore: Shut up! Get them!
Green: Father, I'll show you how much I've grown!

Black Shadow: I've been waiting for a re-match!

Blue: His tactics have improved since last time!

Black Shadow: Poor little elf boy. Daddy doesn't ove you? Don't worry, I'll just kill you and then you won't have to worry anymore.
Green: Silence! The power of the forest surrounds me! I won't lose to you!

Black Shadow: No one can stop me now! I'm the strongest!

Honore: Hurry up, BS. We're moving out. Don't take it for granite that I'm going to wait for you. I have to wreck havoc on those elves. If

yo don't hurry up you'l fall by the wasteside.

Blue: There must be some way to beat them, but how?
Green: I think I have an idea...

DropsofStars: Finally, my love, you have returned. When you return the Magic Beer to ElderGreen he'll have no choice but to welcome you

into the tribe.
Honore: Alas that I as born a dwarf and you an elf. But now we can use the GrimDarkgers s an escape goat and your tribe will welcome me as

a hero and allow me to marry you!

Honore: It's time to extract revenge on these fools. Can't they see that love in any form is pure and true? Who cares what race you are?

Love should be celebrated in all its forms!

DropsofStars: Good luck, my love! We will be together soon!

Honore and his men approach the ElfHome.

Honore: Greetings, ElfLords. I come, like a blessing in the skies, to return your Magic Ale to you. I found it being hoarded by a group of

weird colored guys. I decided to nip them in the butt and return it to you.

DropsofStars: Brothers and sister! We must thank this brave hero for returning our Magic Beer to us!

Green: Not so fast! he was the one who stole it in the fist place!

ElderGreen:Is that so? And what proof do you have?
DropsoStars: Yes! Show us the proof!

DropsofStars:Unless you can prove that Honore stole the Magic Beer,you have no case against him!

Green: There's only one truth I need! And that's truth delivered at the end of my blade. The winner of this battle will be right. As they

Honore: What? Why are they all the same color!?

Red: The burning soul of fire, tempered by the autumn leaves! GrimDark GreenRed stands before you!

Green: The mighty oak, like blades of grass cutting into evil! GrimDark DoubleGreen will make you pay for your sins!

DropsofStars bonks Black Shadow on the head.
DropsofStars: Go get them, you idiot!

Black Shadow: Back for more, huh?

Black Shadow: What? How did you power up in such little time?

Black Shadow: You leave me no choice.

Black Shadow: That's what I thought.

Black Shadow: Did you shoot off my jetpack? That was expensive!

Green: Round two! Are you in?

Green: And now to finish this...

Honore: Don't think you've seen the last of us, GrimDarkgers! I'll just have to try a new tact!

ElderGreen: Son I was wrong abou you, you really are a hero.

ElderGreen: Son, you've proven yourself as a true hero.
Green: Thanks, dad. I'm going to continue fighting for BrikEarth and make you proud of me.

Red: Man this beer is great! I'm gonna drink it all!

Blue: Hey! Save some for us!

And so once again the GrimDarkgers are victorious. But does this mean the fight is not yet over?

Honore and DropofStars. I forgot about them.