In my LDD microspace battles, I usually use Olothontor's BrikSpace as my base ruleset. However, I'll put any additions or amendments I make to my interpretation of his ruleset here.

BrikSpace base ruleset:
Credit to Olothontor. I use this ruleset as a base, subject to the following additions and amendments in this post.
Link: https://docs.google.com/document/d/1VgA ... 5-_WE/edit

"Taking Damage" Amendment:
EXPERIMENTAL. Unlike the other things here I haven't playtested this amendment yet, but plan to use it going forward.
This amendment overrides the "Basic Rules/Special Rule on Damage" and "Basic Rules/Combat/How Does Combat Work?" sections of BrikSpace.
-In vanilla BrikSpace, when an attack overcomes a ship's armor roll, it knocks a component of the ship off or offline. The ship is destroyed when all of its components are destroyed. This is becoming infeasible to keep track of in modern LDD microspace battles.
-Thus, under this amendment, an attack that overcomes a ship's armor roll instead knocks off a hitpoint from that ship. A ship is fully functional until it is destroyed when it has 0 hitpoints. The number of hitpoints a ship has is determined by its size in studs along its longest dimension (usually length, sometimes height). Thus a ship 15 studs long has 15 hitpoints. These will be kept track of with pips in battles.

Weird Weapons:
-Scythian antimatter projectors are nukes in terms of damage (that is, 4d6 damage and 2 inch blast radius), except as turrets they reach their targets instantaneously instead of having the missile slog through the intervening space over the course of several turns. Bigger ones scale appropriately.
-Trattorian Quantum Tunnel Cannons are sized by diameter in inches. For a size-X QTC, it inflicts Xd6 hitpoints of damage directly regardless of the target's agility or armor. They require a turn to charge up after use - whether they are initially usable on turn 1 or turn 2 is up to the gamemaster/scenario. As far as accuracy v. agility is concerned they should be treated like superweapons.
-Immortal black hole missiles are just statted as nukes and scale appropriately.

Peanut Gallery and Miscellaneous Amendments:
-I just use the approximate conversion of 3 studs = 1 inch since LDD doesn't have rulers.
-I pretty much ditched the Cargo Bay rules. Missiles have to represented physically and are removed from a ship as they're fired. Capacity for starfighters is determined by however can reasonably physically fit in the model's designated hangars.
--Corollary: I ditched the missile package rules. Missiles, provided they are represented on the ship as weapons, can be fired and used just like normal guns (but obeying their own BrikSpace stats of course).
-Ship class translations:
--Switch Cruiser & Destroyer in BrikSpace
---BrikSpace says Destroyer > Cruiser, which is incorrect, so switch their stats
--Battleship is called "Dreadnaught" in BrikSpace
--Dreadnought is called "Flagship" in BrikSpace
-Fighter movement: to maintain their relevance, I'm doubling fighter movement to 12" and missile movement to 24"
-Debris: In difficult debris, targets get +4 agility bonus rather than 1d6 (since I don't want to have to code up a special case for my script).

To-do:
Stuff I should amend in BrikSpace that I haven't thought of a good solution for yet. Eventually, once I've got a system that seems to work well in battles and addresses a lot of my concerns, I might just rebundle this post into a new edition of BrikSpace.
-Better shielding rules.
-Introduce component damage rules 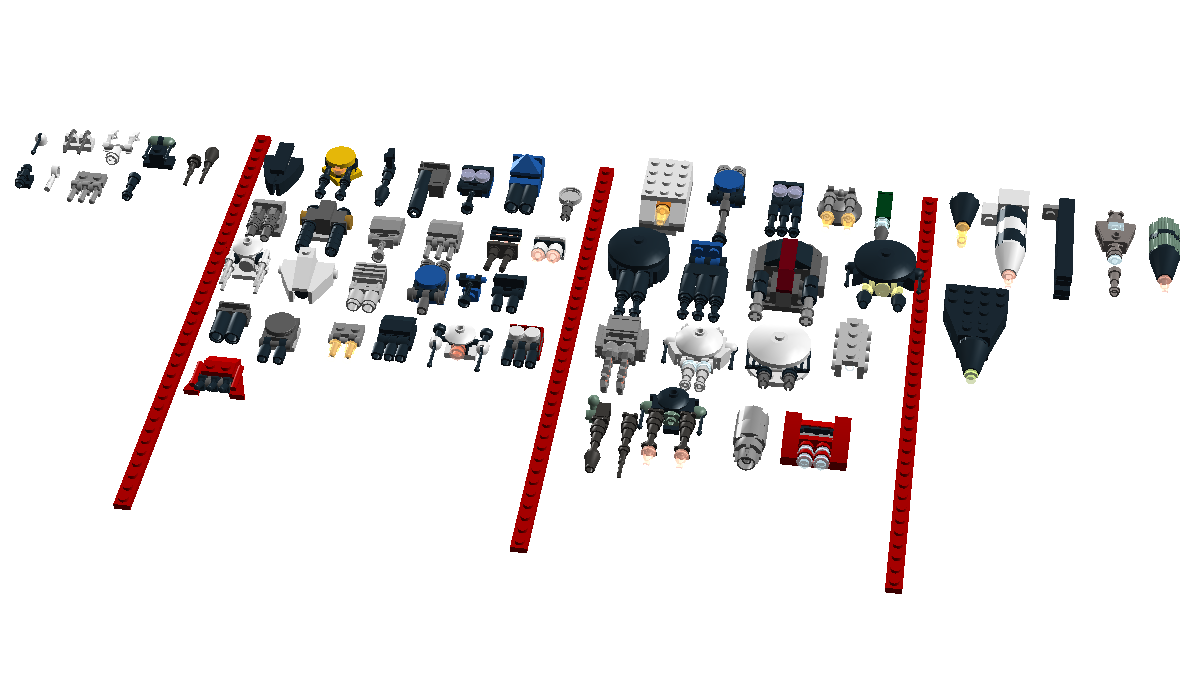 Gun chart, with common examples taken from real ships of Small, Medium, Large, and Mega weapons. Small weapons are usually antennae, screwdrivers, claws, wrenches, and other tiny single-piece weapons. Large guns are at least an inch and usually have a sizable turret base, while Mega weapons are at least 2 inches. Medium weapons are anything that require me to think about their classification.

Because fighters are oftentimes one piece, and everyone seems to like using the claw piece, we still need a way to tell factions apart. Thus I have decided on the above fighter coloring convention for my own battles - not everyone got a color they'd be happy with, but oh well, c'est la vie.
Last edited by Colette on Sat Jan 06, 2018 6:39 pm, edited 7 times in total.
Top

Honestly, just use the standard BW rulebook with a few tweaked weapon stats. This is what I did in past micro battles and it worked just fine.
Top

Any chance of an update on the Gun chart? Be interested to see how you'd class the Glasgow and Immolator turrets.
Top

huh,it's been so long since you did one of these I almost forgot about them.
Top
Post Reply
4 posts • Page 1 of 1