Car Wars is a game my friends and I tried to play when we were kids in the 80's, and utterly failed to wrap our heads around the complexity of the rules. Since then I've had a love/hate relationship with Car Wars: loved the idea, hated the implementation.

As a result, I follow "vehicular combat" miniatures game blogs a bit, and what should I spy?

Gaslands, a "post-apocalyptic vehicular combat" game that Osprey will be publishing in November.

Shoot, ram, skid and loot your way through the ruins of civilisation with Gaslands, a tabletop wargame of car-on-car destruction in a post-apocalyptic wasteland. Players control small fleets of armed vehicles in battles for resources, dominance and survival. With rules for multiple vehicle types (from motorbikes to big rigs), varied special weapons and accessories (including oil slicks, caltrops and nitro boosters), and a host of options for scenarios, environmental conditions, crew and campaigns, players can tailor games to match their own visions for an anarchic future.

Looks like it's a Car Wars style game (but not as complex!) played with converted hotwheels/matchbox cars on tabletop. Here's some photos from a game the author ran at Salute 2017: 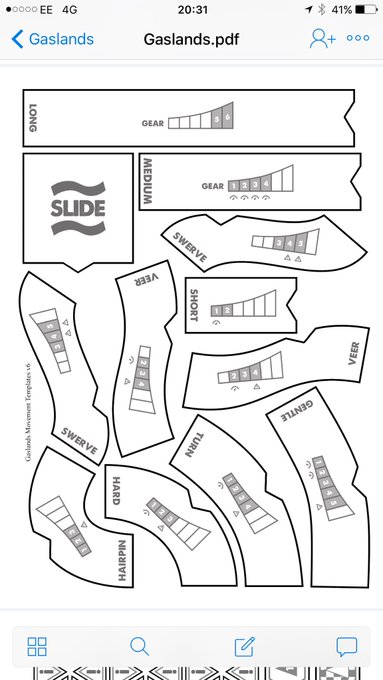 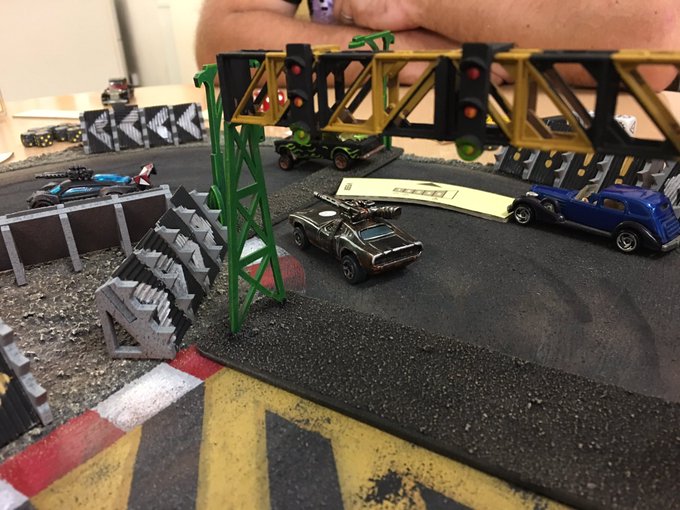 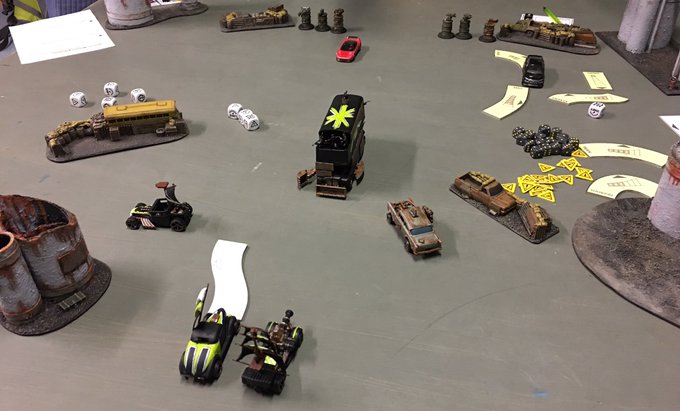 I’ve been buying hotwheels & matchbox cars for a while with the thought of converting them for "vehicular combat" gaming. This might be the kick in the arse I need to get started on that...
Collections: The Bright Seraphim (MF0: Rapid Attack) | Demo Teams (MF0: Rapid Attack)
Yo Dawg, I Heard You Like Mecha: Tumblr | Twitter | Facebook | Pintrest
Top

I played a bit of Car Wars back then.
Also the board game Battle Cars.

Played some myself way back when. I also love the idea and have mucked about with various game designs of my own over time. Mostly using hotwheels. So, right up my alley. Thanks.

Quantumsurfer wrote:I also love the idea and have mucked about with various game designs of my own over time. Mostly using hotwheels.

Yeah, there's a lot of homebrewed "Not Car Wars" out there. Ironically, I found out about Gaslands through the tumblr of a Car Wars/Dark Future/Battlecars fan who wrote his own homebrewed "post-apocalyptic vehicular combat" game: Axles and Alloys.
Collections: The Bright Seraphim (MF0: Rapid Attack) | Demo Teams (MF0: Rapid Attack)
Yo Dawg, I Heard You Like Mecha: Tumblr | Twitter | Facebook | Pintrest
Top

I shed a dadjokely tear for whoever named that. That is beautiful

stubby wrote: I shed a dadjokely tear for whoever named that. That is beautiful

Here's an interview with Mike Hutchinson, the author of Gaslands: Meeples & Miniatures – Episode 235 – Gaslands. The interview begins at about 45 minutes.

Good interview by the sounds of things. I didn't quite follow the description of the movement rules but they sound like they could be interesting. The shooting rules sound like another variant on the Full Thrust beam cannon rules (though a little different from Axles and Alloys). And I heartily agree with Hutchinson's comments about campaign rules and especially the Necromunda-style injury rules that people always say they want, even though no-one actually likes them in play. I've tried running a few wargaming campaigns & leagues, and they all* fell apart when players found themselves falling behind with no possibility of catching up.

I have a copy of the Gaslands pdf now, and I'll be reading through the rules soon.


*with one notable exception: there was a Heavy Gear Duelling league which I repeatedly rebooted with new houserules as one of the players kept abusing the team creation rules and bringing utterly broken teams that ruined everyone else's fun to the games. Years later, that munchkin player revealed to me that he had been a playtester on the HG Duelling supplement we were using, and had warned the publishers about all the loopholes he had found prior to publication. But apparently he didn't see fit to discuss this with me as I was trying --and failing-- to get that duelling league started.

Let us know what you think of the ruleset.

Sorry about the munchkin. Been there. Never with a playtester, but still.
Quantumsurfer's Narrative Index
Top

When looking for games like this I stumbled upon Car Wars, Dark Future, Thunder Road, etc... But the first one, after some digging and taking a glimpse at the rules, hasn't stood up aswell and does't seem as accessible. Dark Future sounds awesome but is dead and has minis of its own (not that that should stop anyone but meh)(also has a video game coming soon on Steam) and Thunder Road, despite looking super fun, is pretty linear and kinda expensive to get right now.

So, the rulebook is pretty cheap and has all the resources you need to play (also check out the other stuff Osprey publishes. Great military books and other games) and I still had a bunch of cars and 1/64 scale vehicles from when I was a kid. Add that to a fresh and sprawling community and yeah, Gaslands.

My rulebook arrived right after I came to the US, so unfortunately haven't gotten the chance to go through it in detail yet. However, I've also been dwelling in the FB groups (awesome HW and MB car mods there) and YT, especially The Battlehammer and James Hall Miniatures which gives a pretty good idea of how the game plays out and how to modify the minis.

Can't wait to try it out, build some wacky vehicles and demo it out back home!

Somewhat unrelated, but the now-dead 40k spinoff game GorkaMorka can be found, in it's entirety, online, it's similar.

Steel_Valkyrie wrote:Somewhat unrelated, but the now-dead 40k spinoff game GorkaMorka can be found, in it's entirety, online, it's similar.

At some point, I might mash GorkaMorka and brikwars into some unholy amalgamation.

I've had to plans to make something like that in Hellius ever since Fury Road came out. One day...

I'll try and get some lore into it from all of the post-apoc universes.